1. Visit the birthplace of L.A.

Take a trip back to the city’s 18th-century beginnings at downtown’s El Pueblo de Los Angeles Historical Monument, commemorating the Spanish settlement that ultimately became Los Angeles. While most people are drawn to the hustle, bustle, and bright colors of Olvera Street’s open-air market, or to the celebratory music and dancing in the nearby plaza, it’s also worth checking out the quieter side of history. My pick is the rustic Avila Adobe, the oldest home in L.A. — join a guided tour or wander at your leisure to take in the restored living quarters and shady courtyard.

2. Spend a night at the movies…in a cemetery. 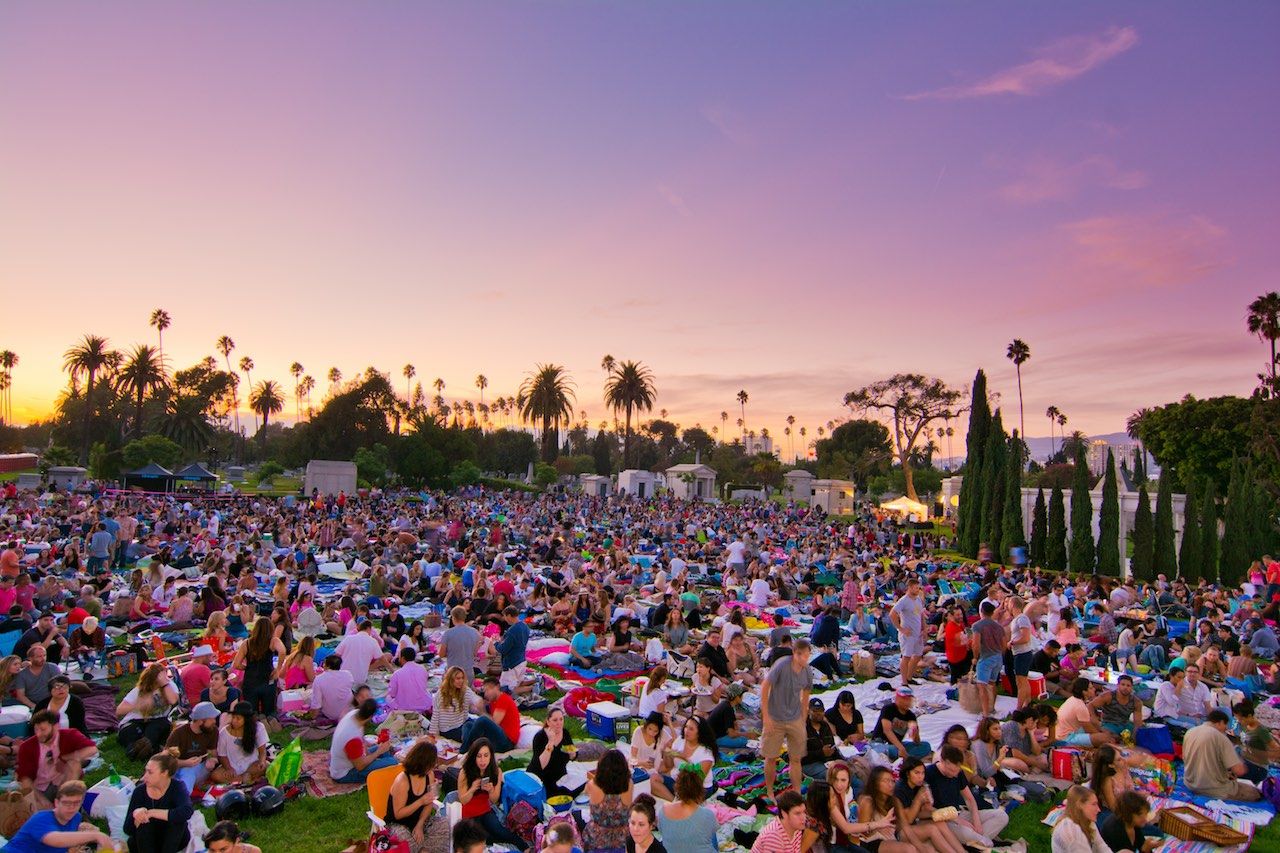 Angelenos love movies and love being outdoors, so it’s no surprise that fresh-air film screenings are hugely popular here. You can find outdoor movies in parks, on rooftops, and at the beach, but perhaps none is as unique (or beloved) as Cinespia’s summer series at the Hollywood Forever cemetery. Arrive early to snag a good spot on the expansive Fairbanks Lawn, named for legendary actor Douglas Fairbanks, one of the cemetery’s many famous eternal inhabitants. During the non-summer months, Hollywood Forever is still quite the, ahem, lively place, featuring concerts at its Masonic Lodge and the city’s biggest Día de los Muertos celebration in late October.

3. Grab a tray and talk to the animals at Clifton’s Republic. 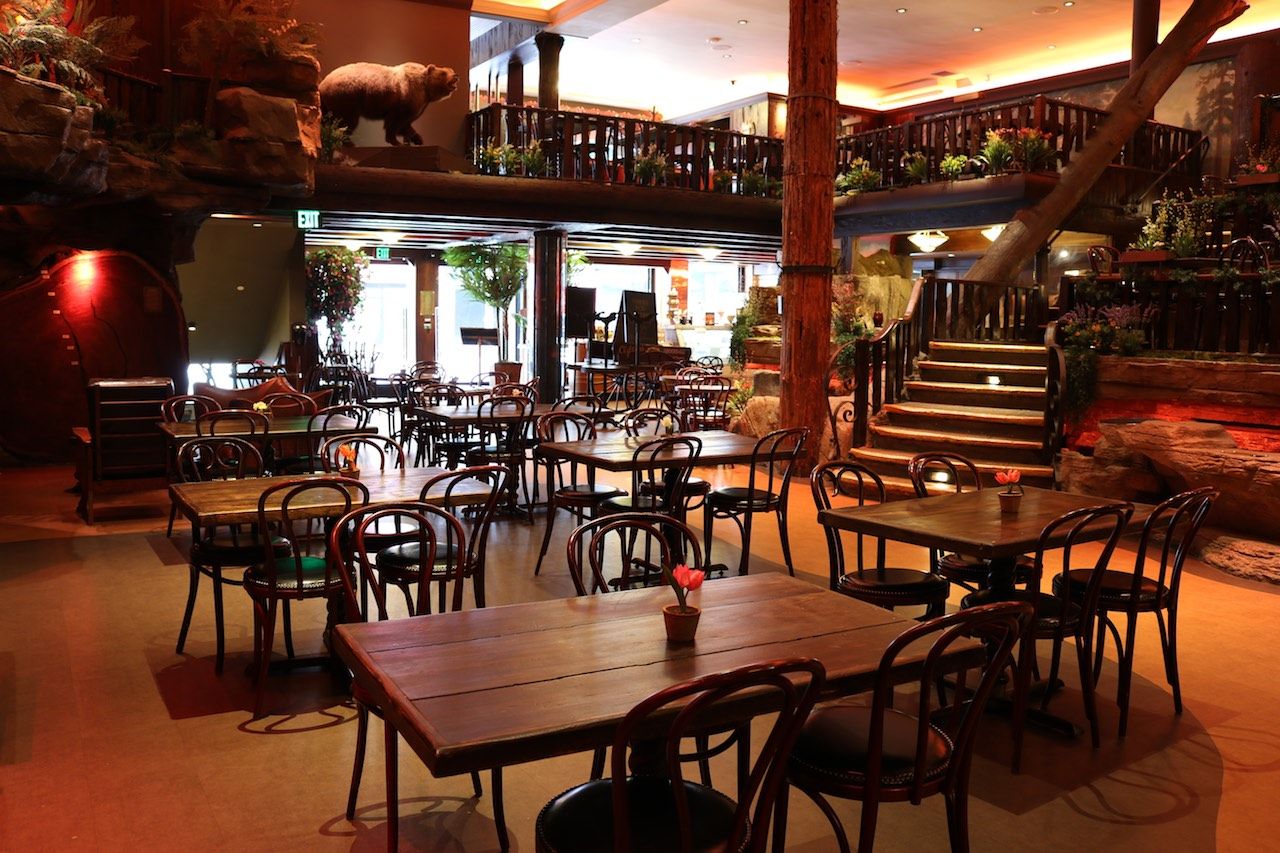 Were you aware that there was a “Golden Age of Cafeterias?” Well, neither was I, but Clifton’s Republic is an artifact from this mystical time period when adults channeled their inner schoolchild and happily pulled trays past an assembly line of foodstuffs. The downtown institution underwent an extensive renovation in 2015, which amped up its David-Lynch-has-supper-at-the-museum vibe. Mysterious forest enclaves, haunting mounted animals, and unusual relics abound. Yes, you can grab some Jell-O in the cafeteria’s lunch line, but you can also enjoy live jazz, sip a tropical cocktail, or settle in for fancier eats throughout the rest of the five-story Clifton’s complex.

There’s an abundance of film history scattered around Los Angeles, but for a truly unique experience you have to head for the hills. Well, to be specific, the Santa Monica Mountains National Recreation Area, home to Paramount Ranch. For a quarter of a century, beginning in the 1920s, this pastoral, oak-filled landscape served as one of Paramount Pictures’ most prolific locations, where legends like Gary Cooper, Mae West, Cary Grant, Claudette Colbert, and Bob Hope plied their trade. While film and TV shoots are less frequent nowadays, you can still catch a whiff of movie magic by walking through the ranch’s Western Town, a life-size set complete with realistic retro façades.

5. Wander around a spooky abandoned zoo.

Sure, you can visit the Los Angeles Zoo to see real-life lions, tigers, and bears, but it’s also pretty interesting to check out where they used to live — the spooky but intriguing “Old Zoo.” Known as the Griffith Park Zoo when it opened in 1912, this small attraction drew visitors for over 50 years until a larger, more modern version opened a mile north. The old zoo was left to the elements, and exploring the derelict enclosures makes for a fascinating, if slightly creepy, adventure. To find your way, park at the Old Zoo Picnic Area (5400 Griffith Park Drive) and listen for ghostly lion roars…or modern-day picnickers. 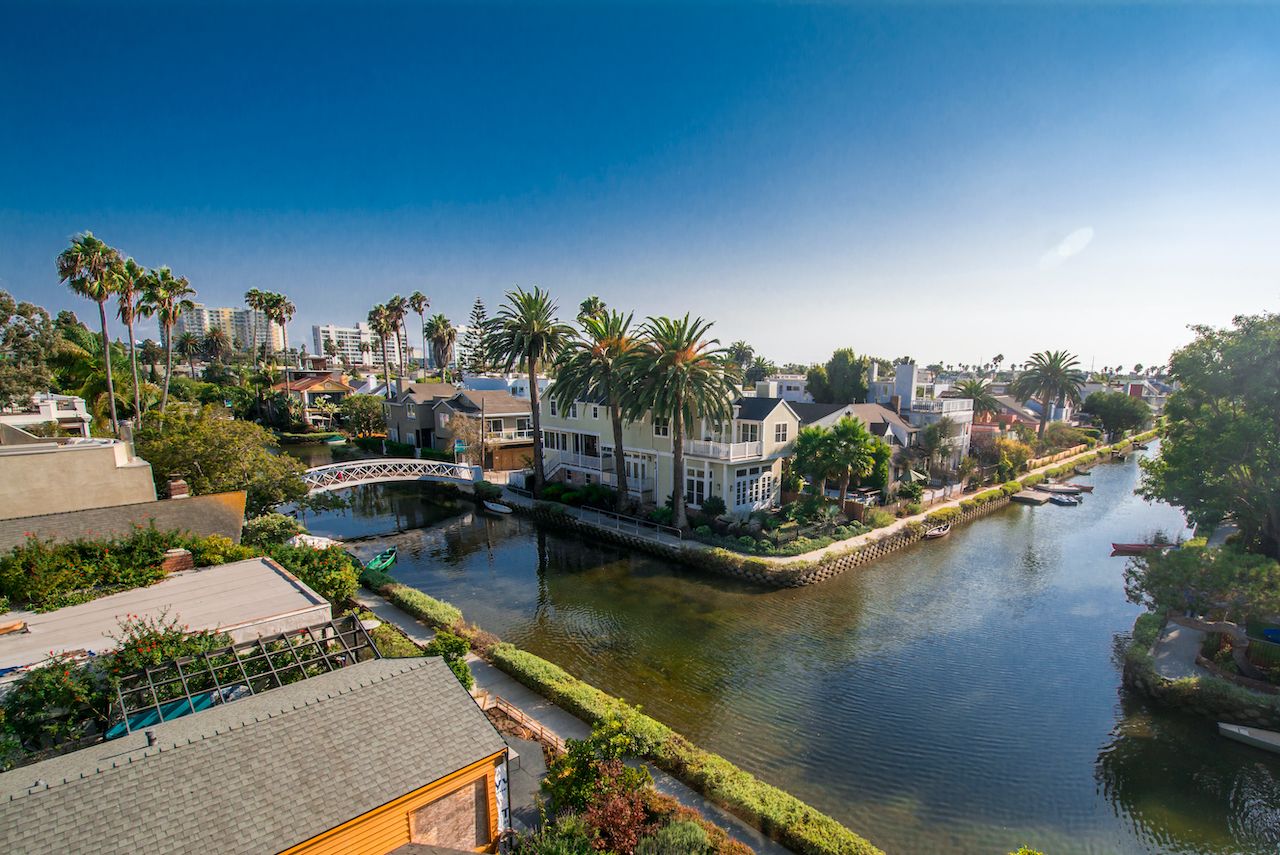 While you won’t find any gondoliers belting out romantic numbers in Italian, the Venice Canals, located half a world away from their better-known counterparts, offer a quiet pedestrian paradise — an interesting juxtaposition to the carnival atmosphere at Venice Beach just a few blocks to the west. The canals were created at the turn of the century as part of developer Abbot Kinney’s “Venice of America” tourist attraction, but most were filled in after its popularity waned. The few that remain provide a charming atmosphere for an afternoon walk as you stroll past lush gardens, snap photos of scenic footbridges, and gawk at some of the more unique homes lining the canals. While there are several points of entry, you’ll find public parking options near the northwest corner of the canals, which you enter just past the intersection of Strongs Drive and South Venice Boulevard.

7. Burn some calories while exploring a network of hidden stairways.

Spend enough time here and you’re sure to hear somebody say, “Nobody walks in L.A.” Help cure that misconception by visiting any number of the city’s 400+ hidden stairways that date back to its streetcar days. While nearly any of the stairs offers a good workout, sweeten the deal by choosing a route that throws in a little bit of history, too. Film buffs might consider the “Music Box Steps” (935 Vendome Street), named for the Laurel and Hardy short that featured our protagonists attempting to push a piano up the steep flight. Pro tip: Don’t bring a piano.

Train enthusiasts (or anyone who likes having fun) should beeline it to the north side of Griffith Park, which features not one, but three locomotive experiences. Begin at the Travel Town Museum to check out historic train cars and other memorabilia, then hop aboard the Griffith Park & Southern Railroad and the Travel Town Railroad for a pair of miniature excursions. Round out your journey with a stop at the Los Angeles Live Steamers Railroad Museum just a minute east along Zoo Drive, where you can peruse various exhibits before straddling a tiny steamer train that takes you past, among other things, a beautiful red barn that used to belong to Walt Disney.

9. Descend into delightful confusion at the Museum of Jurassic Technology. 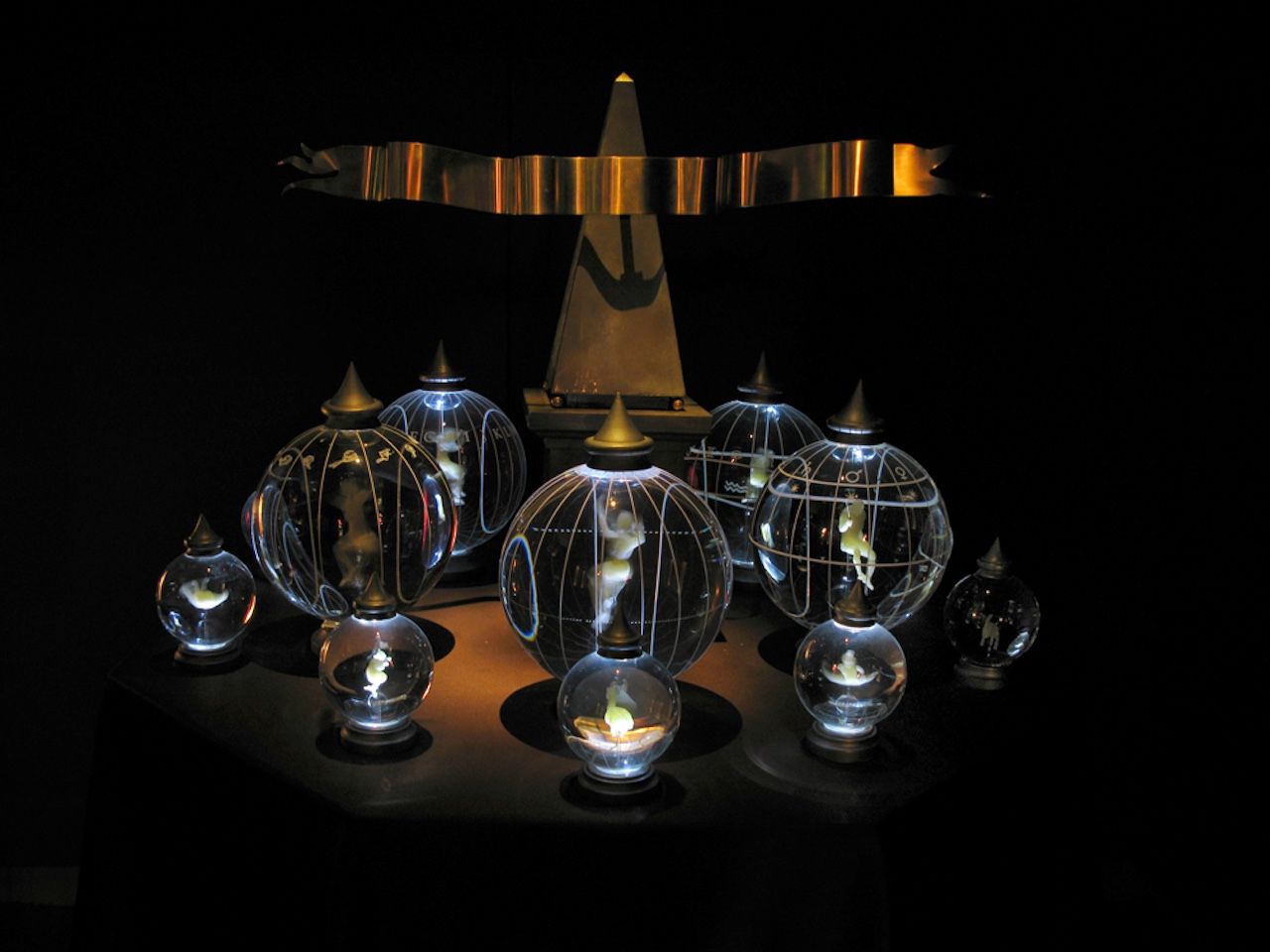 Photo: The Museum of Jurassic Technology

Nearly anything I write here could potentially spoil the surprise that awaits visitors at the Museum of Jurassic Technology. Does it feature exhibits about dinosaurs? Does it celebrate the history of primitive tools? Does it do both of these things — or neither? I really shouldn’t answer those questions in any sort of detail. Instead, I’ll suggest that you do no further research and instead head straight to this absolutely mesmerizing, delightfully perplexing place to absorb its collection of wondrous oddities, and perhaps sip a cup of tea or two.

If you’re looking to waddle around a bit after stuffing yourself full of dim sum in L.A.’s Chinatown, make sure you find your way to one of the city’s stranger museums, Velveteria. Truthfully, it’s less a museum than a gallery of one couple’s rather obsessive love for velvet paintings — and that’s fine by me. It’s worth the price of admission to let the proprietors regale you with tales of film stars, rock icons, and Polynesian dreamgirls, but save time to wander the small but stuffed space at your leisure and marvel at just how lovely Martha Stewart appears as rendered on velvet.

11. Sip a root beer float in style at the Fountain Coffee Room.

Even if your pockets don’t run deep enough to slip under 800-count sheets or mingle poolside with the rich and famous, you can still catch a glimpse of the good life at The Beverly Hills Hotel’s Fountain Coffee Room. Walking into the small room is like stepping back in time with its banana leaf wall décor, blush pink accents, and retro curved counter. The menu doesn’t offer the cheapest bites in town, but the experience of sipping an old-school milkshake while your favorite actress dines three stools over is just about priceless.

12. Travel down memory lane at the Old Town Music Hall. 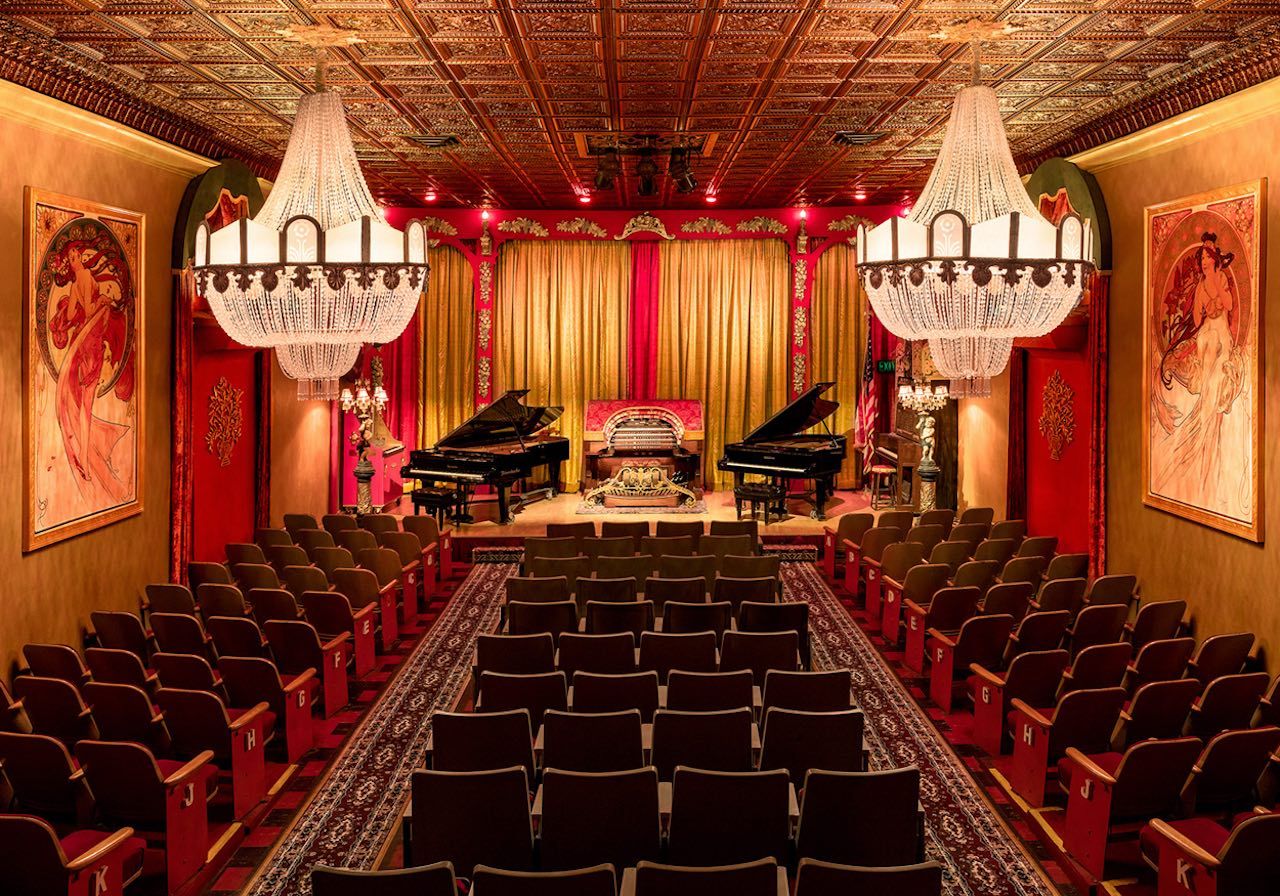 We live in a magical time, when nearly every piece of recorded material — film, television show, album — is available with just a few clicks of your mouse. However, cinephiles and music enthusiasts will relish the opportunity to forget all about modernity at the Old Town Music Hall in El Segundo. The small theater harks back to a simpler time, screening classic films and hosting concerts that feature artists and bands who specialize in old-timey vibes. The theater itself is beautiful, but its crown jewel is the Mighty Wurlitzer, a show-stopping vintage pipe organ that makes an appearance (and spectacular music) during silent film screenings.

This post is proudly produced in partnership with Discover Los Angeles.
Tagged
Travel Los Angeles, CA, United States
What did you think of this story?
Meh
Good
Awesome