FOR STARTERS: Traverse City is the “Cherry Capital of the World.” It’s also home to giant sand dunes, world-class culture and arts festivals, and…a celebrity dog? This gorgeous part of Northern Michigan is all kinds of surprising. Read below for more. 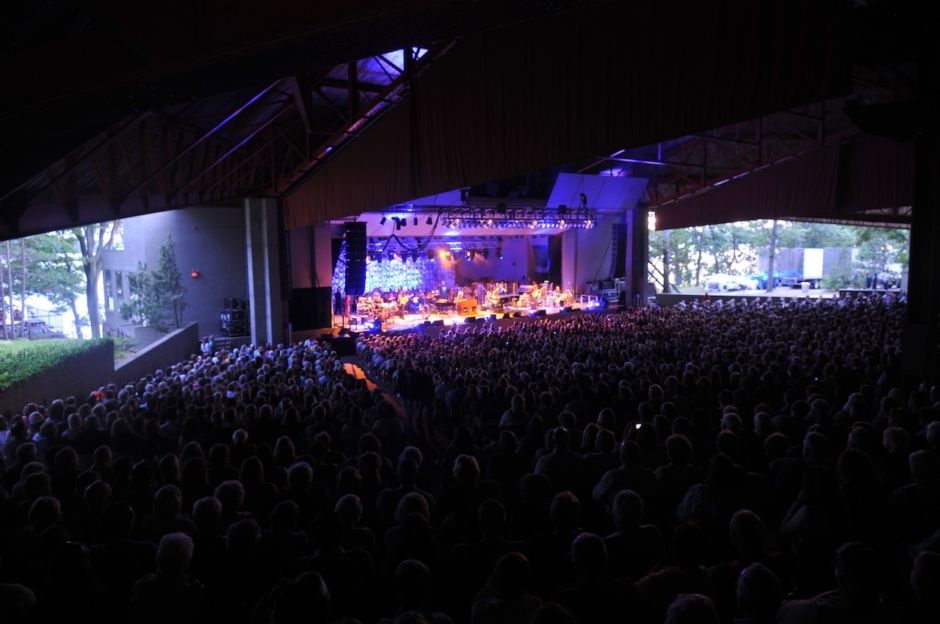 Photo: Interlochen Center for the Arts

The Interlochen Center for the Arts is one of the country’s largest presenters of the arts, hosting around 600 performances throughout the year. And the caliber of artists is high: The Interlochen Arts Festival has seen everyone from Bob Dylan to Sarah Jarosz perform.

There’s also the acclaimed National Writers Series, which brings in authors all year (think Margaret Atwood, Ann Patchett, and Jodi Picoult in one weekend) for chats about writing, books, and life — all hosted in the beautifully restored City Opera House. Not bad for a city of 15,000.

2. Traverse City hosts one of the best film festivals in the country. 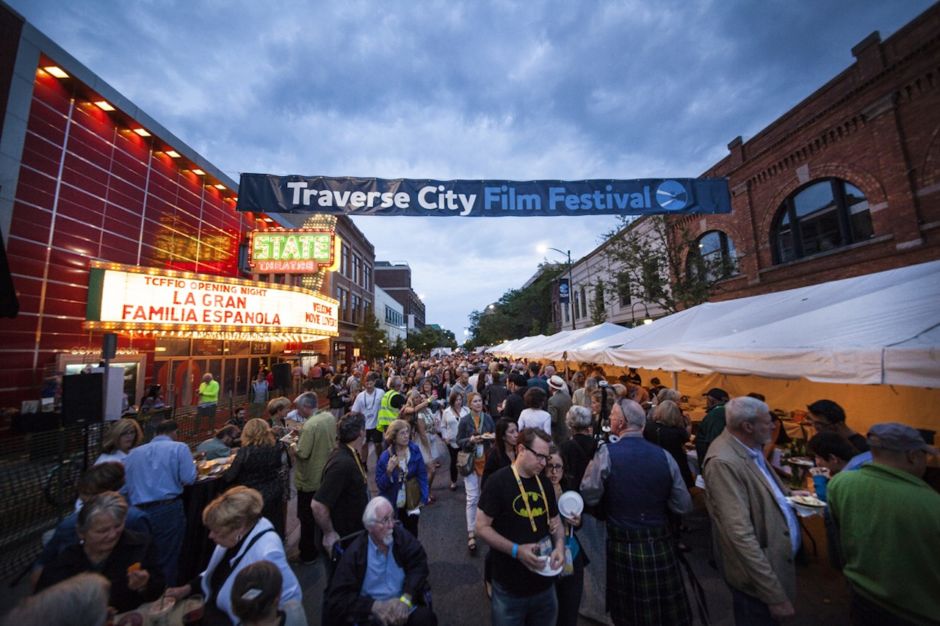 The Traverse City Film Festival, founded by Michigan-native Michael Moore, screens indie films, studio premieres, and tons of documentaries during its weeklong summer run (July 25-30, 2017). And it’s held in some great venues, including free nightly screenings at Open Space Park on a 65ft screen by the water. The film festival also owns two downtown theaters staffed mainly by volunteers. Check out a film at the festival’s State Theatre, smack-dab in the middle of downtown, and make sure to look up to check out its incredible starry ceiling.

3. You can catch both sunrise and sunset from the downtown beaches. 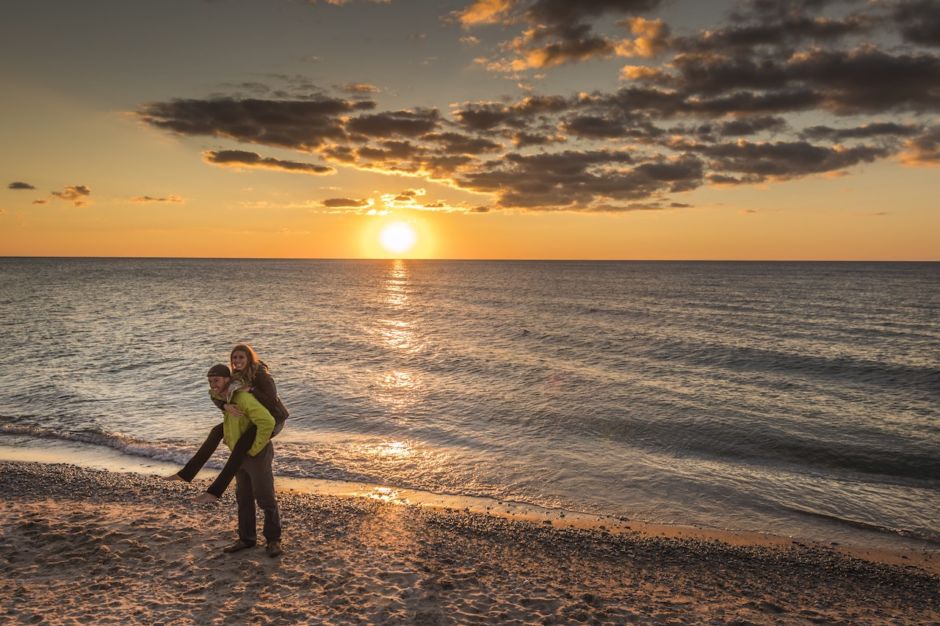 Catch a perfect sunrise by heading to Clinch Park — a sandy beach right in downtown — and parking yourself on one of the east-facing Adirondack chairs for a glimpse of that morning sun. Come evening, visit East Bay Park beach or the breakwall next to the marina to watch as the pinks and golds spill over town. Alternatively, head over to the Sleeping Bear Dunes (more on those below), put in at Glen Arbor, and kayak around to the western side of Sleeping Bear Point for an extra beautiful twilight vantage point.

4. The former psychiatric hospital is one of the coolest hangouts. 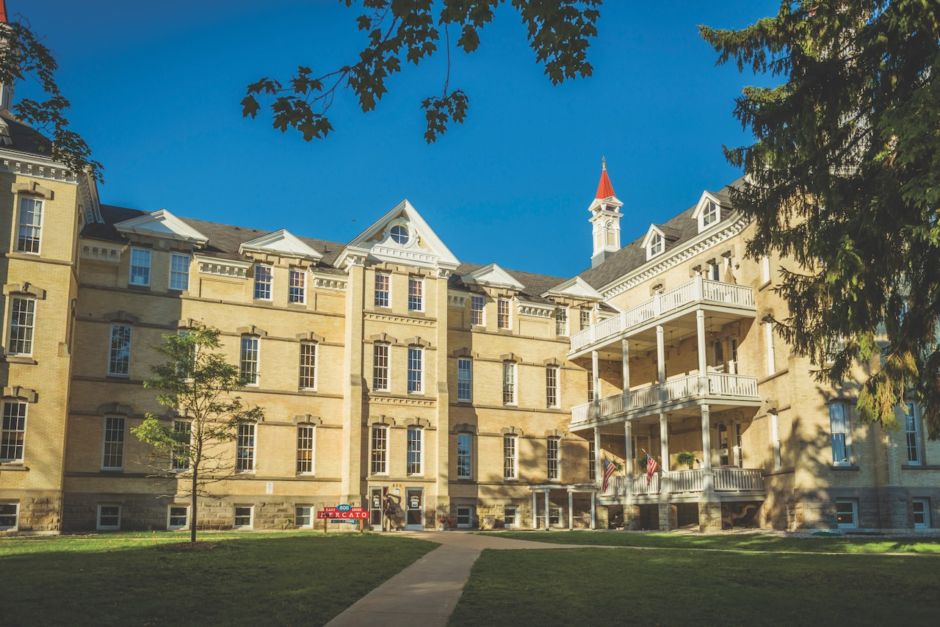 The former Traverse City State Hospital opened in 1885 with a “beauty is therapy” approach to treating mental illness. The hospital closed in 1989, and the Minervini Group took over redevelopment efforts in 2000. Today, one of the nation’s largest historic adaptations is underway at Grand Traverse Commons.

Here you’ll find restaurants, galleries, shops, meeting spaces, offices, and condominiums. The centerpiece of the transformation is Building 50, which covers three stories and almost 400,000 square feet. Several other buildings have since been renovated and occupied, and the grounds — once used by patients for growing fruit and vegetables — are filled with woodsy trails, a botanic garden, a community garden, exotic trees, open lawns, and a cavernous cathedral-ceilinged barn that’s a popular spot for weddings and concerts.

5. The Cherry Festival is a really. Big. Deal. 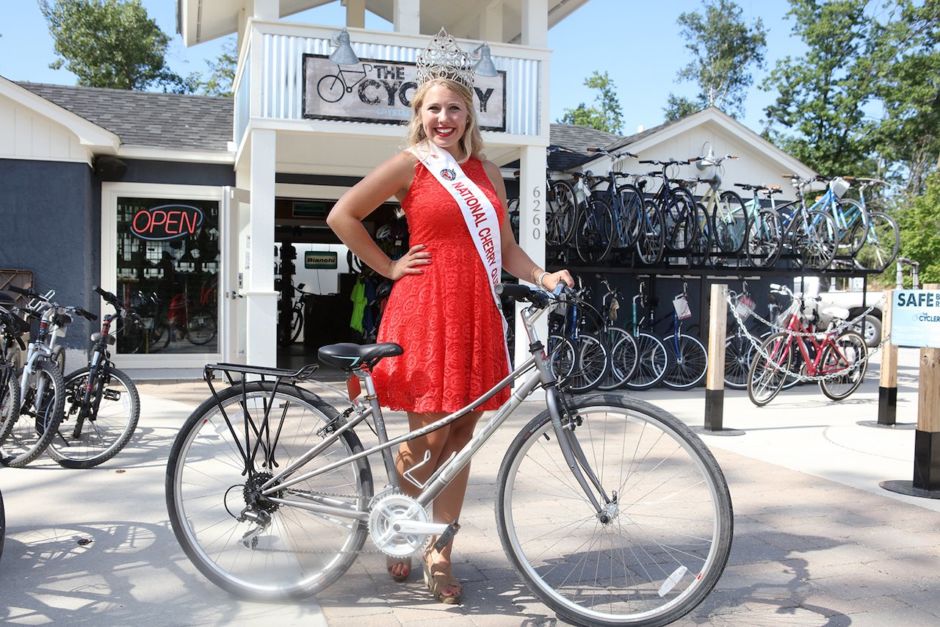 Traverse City proudly proclaims itself the Cherry Capital of the World, and not without reason — the region produces around three quarters of America’s tart cherries. The timing of the weeklong National Cherry Festival (July 1-8, 2017), pegged to attract Fourth of July travelers, is a bit too early for the local peak harvest — but who cares when there are so many cherry pies to try and parade floats to see?

Stick around until mid-July, and cherries show up everywhere. They’re even found on the road, as fruit gets transported in water-filled tanks that slosh overboard when the trucks round curves and corners. Gorgeous red splatters, everywhere.

6. The food scene is off the hook… 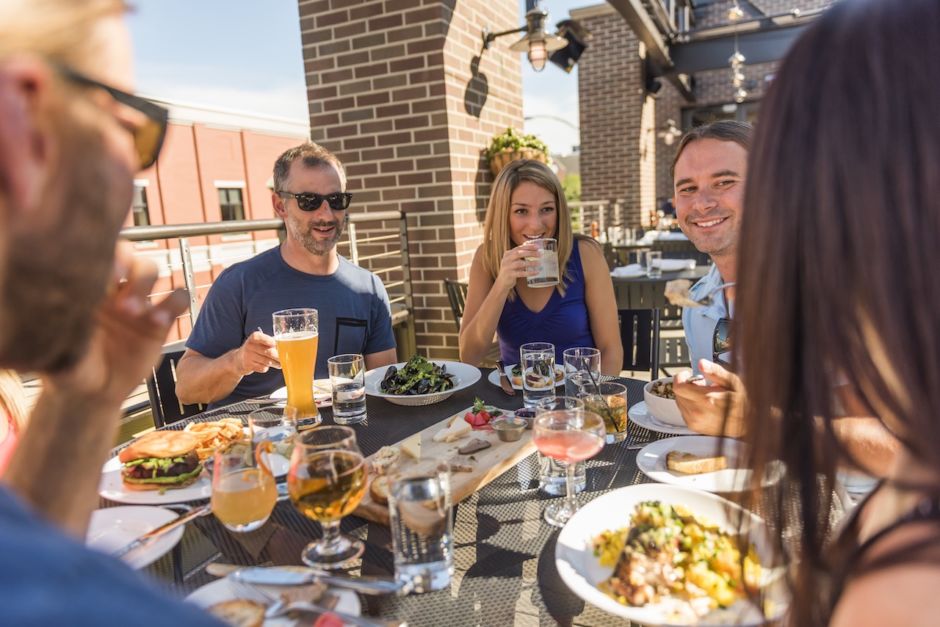 Tacos, ramen, fresh fish, food trucks, innovative veggie dishes — it’s all being created and served here. All that great food might have something to do with Traverse City’s Northwestern Michigan College, whose culinary school is known for producing amazing chefs.

To keep abreast of the best spots to check out in town, follow Mario Batali on Twitter. He has a summer place in Leelanau County and raves about his favorite local hangouts. According to the owner of local café Frenchies Famous, a Mario tweet can result in a “stampede” of people looking to order his house-made falafel and crunchy ginger slaw, so you may have to join a lineup of other hungry foodies.

7. …and Traverse City is at the forefront of farm-to-fork eating. 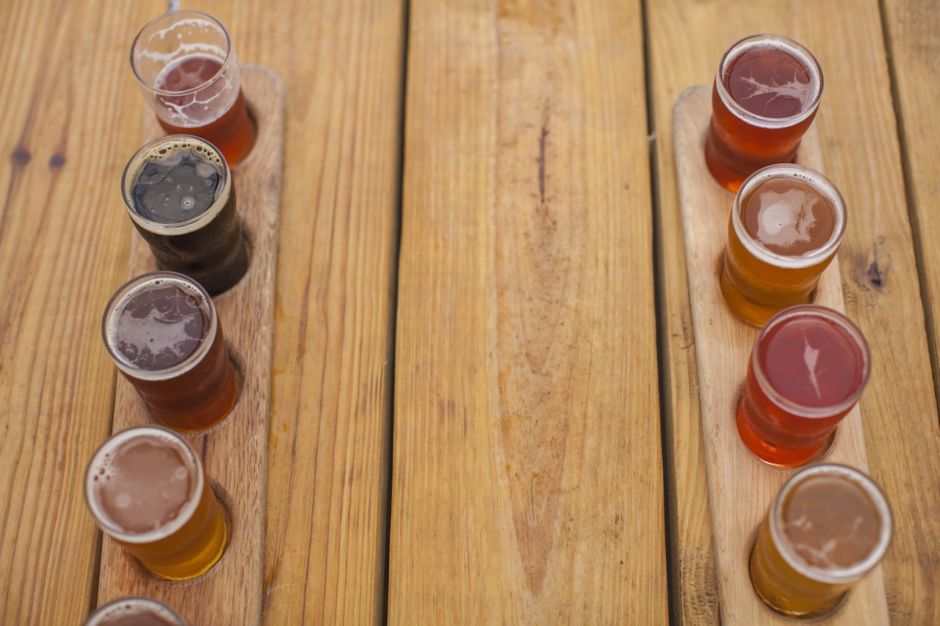 Here you’ll find many restaurants listing the farms that contributed to their daily menus. They’re the spots that market themselves as farm-to-fork, earth-to-table. And this local-is-best ethos extends to the drinks, too. Hops grown locally are made into the best craft beers, and our grapes are turned into wine. Even the local Goodwill has gotten in on the action, starting a farm-to-freezer program for local produce.

The Olesons own one of the largest bison herds east of the Mississippi, with between 250 and 350 animals. You’ll spot the (very photogenic) herd on US-31 South.

9. The biggest Instagram influencer in town hangs out at the airport.

The Frank Lloyd Wright-esque Cherry Capital Airport is within the city, meaning it only takes about 10 minutes to get from plane to beach. But that’s not the best thing about it. Our airport just so happens to be home to Piper, the bird-chasing dog. He’s a border collie (and technically the answer to the FAA’s requirement to have a wildlife management plan) who wears slick goggles, rides in parades, and hangs out at local networking events with his handler, Brian Edwards. He’s got his own Instagram, YouTube channel, and webcam. No wonder he’s been called “the world’s coolest dog.”

10. The area’s old railroads have been turned into some epic trails. 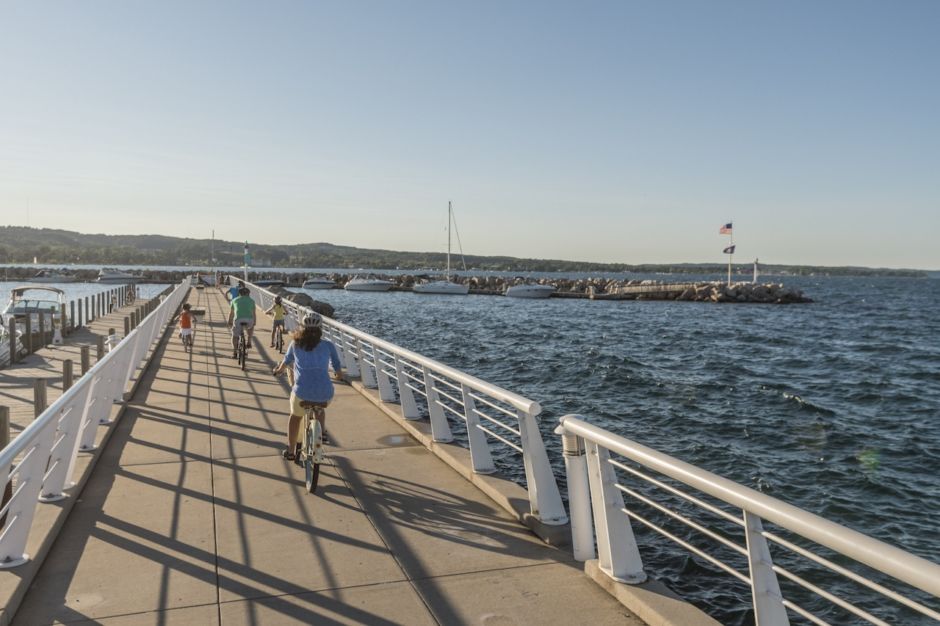 The network of Traverse Area Recreation and Transportation Trails (TART) uses old railroads and other scenic routes for more than 60 miles of trails in the region. The system is growing, too, with plans to extend around Boardman Lake. If you want even more wildness, head over to the VASA Pathway, good for mountain biking (including the Iceman Cometh Challenge in early November) and cross-country skiing (home to the VASA race in February).

Or at least, giant sand dunes that look like sleeping bears. Twenty-five miles west of Traverse City, Sleeping Bear Dunes National Lakeshore is a beautiful spot on the edge of Lake Michigan that comprises 64 miles of freshwater beaches, forested islands, and miles and miles of hiking options among the giant dunes. 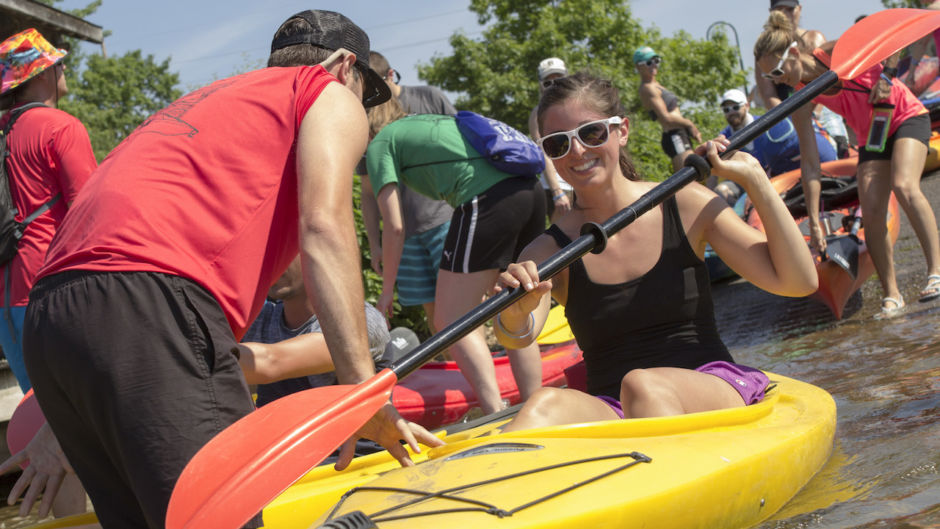 The Boardman River starts far south of town, meanders through state forests and campgrounds, runs over rocks and logs, and even churns up some whitewater (tame to most paddlers, but still fun). In town, the Boardman becomes a lake, then a slow, curving river channel with boardwalks along the sides. In summer, you can join paddling pub tours to six different breweries along the lake and river. Yep, Traverse City knows how to make the most of its watery setting.

This post is proudly produced in partnership with Traverse City Tourism.
Tagged
Culture Insider Guides Traverse City, MI, United States
What did you think of this story?
Meh
Good
Awesome

10 Things You'll Only Understand if You've Been To Traverse City, Michigan