There is so much more to Barcelona beyond the surface of the Sagrada Familia Church, Parc Güell, and La Rambla. Plan your visit around Barcelona’s up and coming neighborhoods as well. 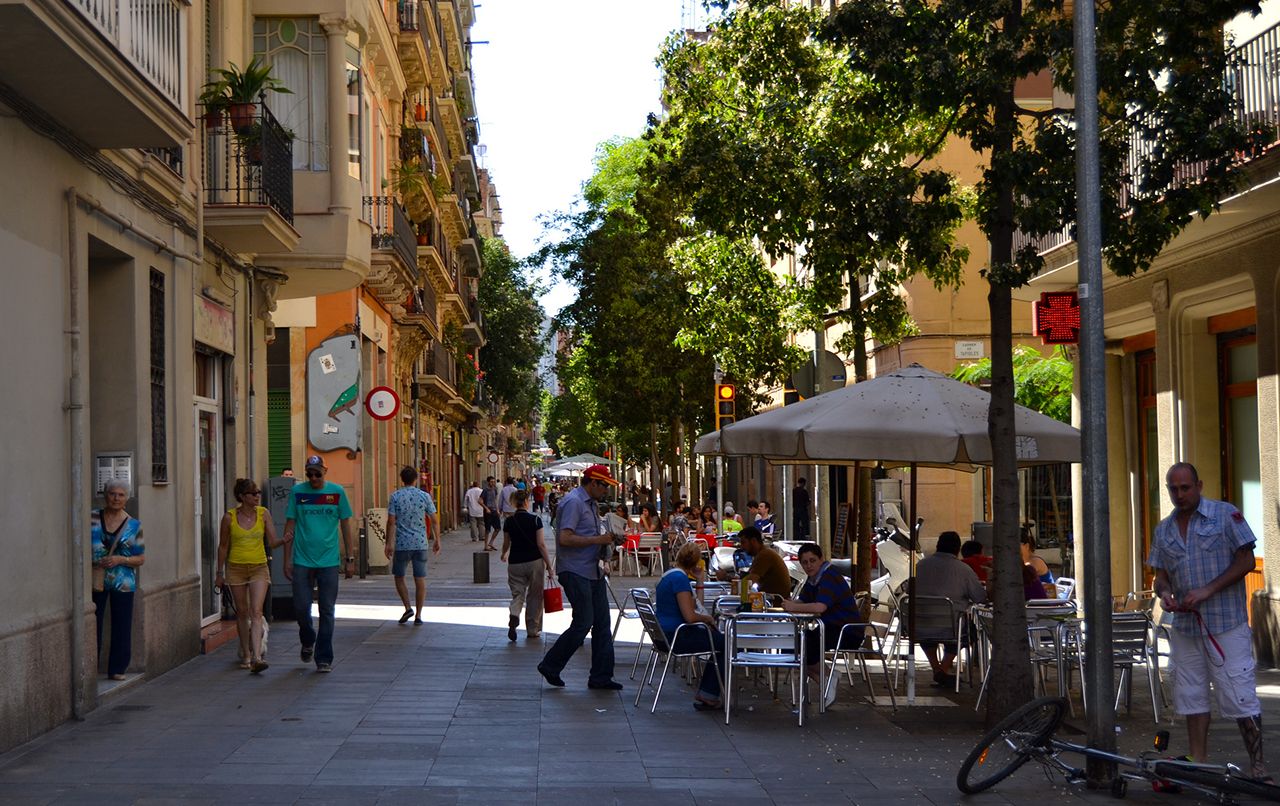 Poble Sec is a local favorite, with almost all of Barcelona’s best tapas and pintxos in one place. On Carrer de Blai, you’ll find a dozen restaurants with bars overflowing with tapas. Sala Apolo, a chill nightclub, is open seven themed-days out of the week. Check out their “Nasty Mondays” and “Crappy Tuesdays.” Music here is techno/ electronic on the first floor and whatever is playing on the upstairs radio.

If you love art, you’ll feel right at home in Poble Sec, home to the Joan Miró Foundation, where you can explore beloved painter Joan Miró’s work and look at the city from above. Check out MNAC, the national art museum and hang around for the magic fountain show that starts at 9pm, with lots of people dancing and the lights synched to the music.

Barcelona has a big skateboard community, so if you want to make some friends and board together, come to the graffiti-filled Jardins de les Tres Xemeneies —  created specifically to help enthusiasts practice the art. The Parc del Mirador del Poble Sec has a sweet panoramic view of Barcelona and the Parc de la Primavera is perfect for playing table tennis, walking your dog or having a couple of beers at sunset. 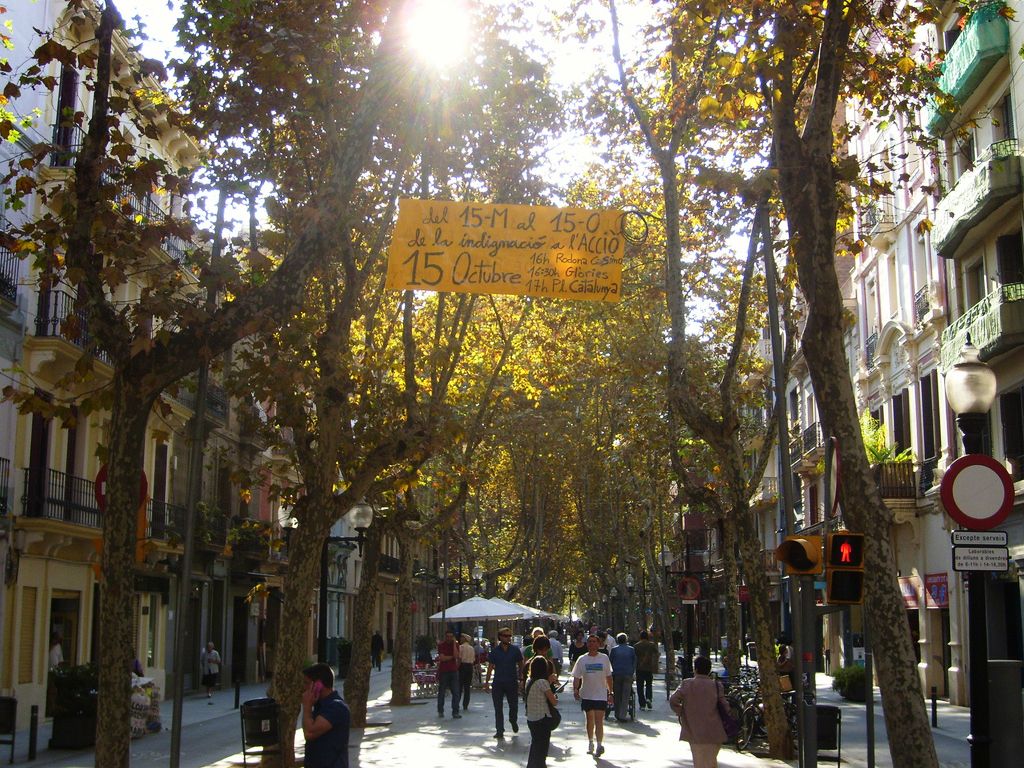 Being in Poblenou feels like you are now part of a small and very relaxed community. Locals choose this low-key neighborhood to avoid the bustle of the center. You’ll hear mostly Catalan speech at the cervecerías. Stop at 100 Montaditos - Rambla del Poblenou and once you’ve got your buzz going, head over to Touch Music Karaoke BARCELONA.

Get your brunch green juice and eggs on at Monopol or . If you’ve got a sweet tooth, check out Chocolat-Box for assorted chocolates or chocolate-infused olive oil. The tranquility of Poblenou extends to its beaches, Platja del Bogatell and Platja de la Mar Bella, which are far less crowded than the Barceloneta.

Poblenou used to be a major industrial area, so the old factory buildings remain, but are now decorated with unique and well-done graffiti. The Parc de l'Estació del Nord is within a short walking distance, and is a great alternative to busy Ciutadella Park, with space for picnics and naps around the curvy blue pyramid statue. 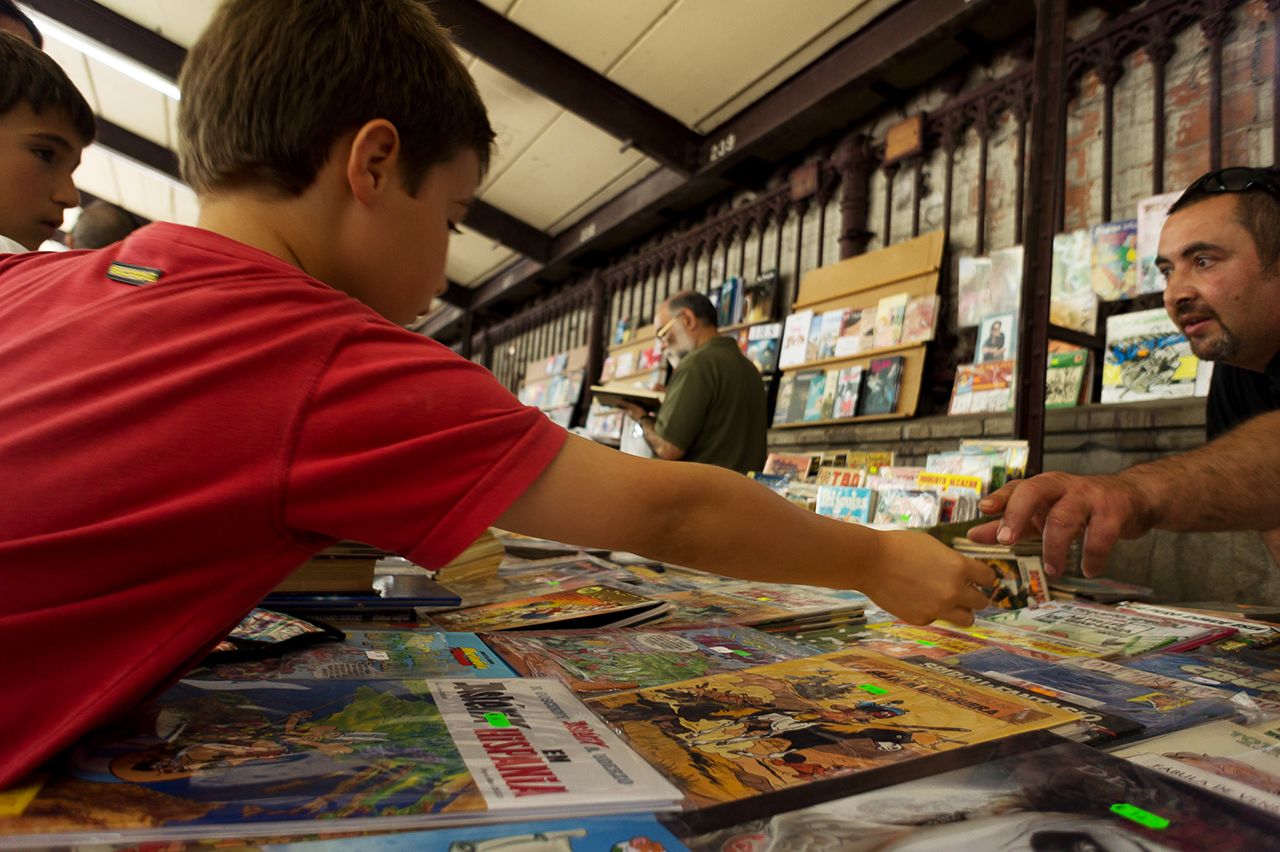 At first glance, Sant Antoni almost feels like an extension of El Raval, but it has a personality of its own. You’ll find lots of cozy cafes here, like Federal Café which is perfect for working in quiet while munching on avocado toast. Sant Antoni also has many delicious falafel restaurants. Check out Kabab Ghar, for great falafel, kebab and massive pints.

You can easily spend an entire afternoon in the Sant Antoni Market, browsing through clothes, shoes and accessories, where you’ll find unique gifts at cheaper prices than they go for in El Born.

Sant Antoni has many authentic places you can have a glass of Barcelona’s beloved vermouth. Indulge in a cold glass of this spicy wine at  and Bar Calders, where you’re bound to meet some cool people. 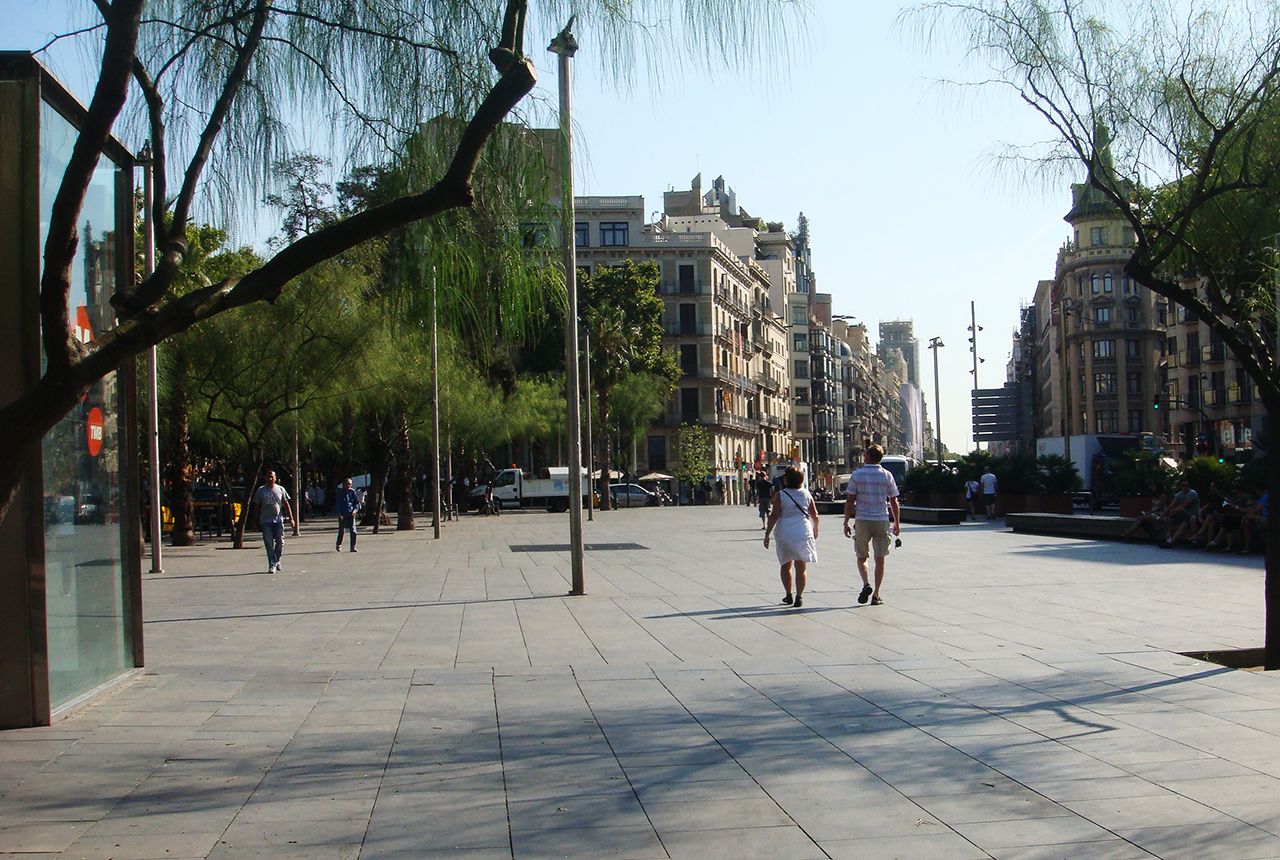 Universitat is located close to the main center of Barcelona, yet still somewhat incognito. Head into the university garden to play with the dozen black cats that live chill here. Check out the University of Barcelona, and the events announcements on the walls — the best and most underutilized way to find events where you can meet locals and experience authentic Catalan culture.

The little plaza in front of the university is where skaters hang out at night, drinking beers and practicing their tricks. If you love to shop, there are a ton of mostly affordable stores around the corner of the square. If you love Indian food, Gandhi Restaurant Hindú has great food. 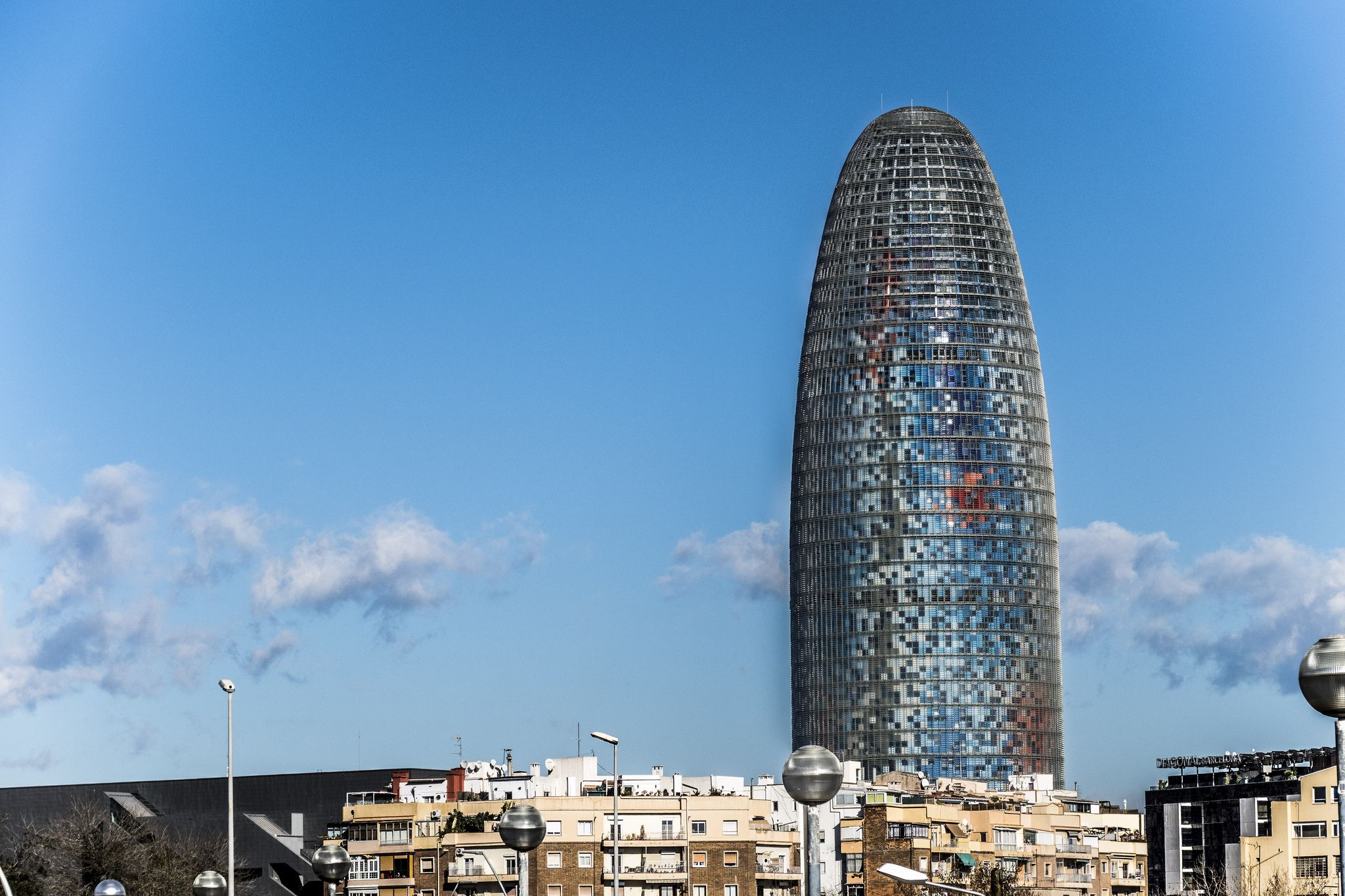 Sant Martí has recently become a huge draw for young expats, thanks to the booming tech industry. The Agbar Tower, shaped like a giant egg, is an office building and one of the tallest skyscrapers in the city. Be amazed by it at night when it glows in red and blue.

If you want to have a taste of some world-class nightlife, check out Razzmatazz. This club is divided into three levels all of which play electronic and alternative music and bring in both famous and local DJs. The outdoor terrace is a great escape from the booming beats of techno, and a sweet spot to hang out with locals.  is another favorite nightlife spot. There are two bars under the same name in town, but this one is better as it is larger. The building used to be an old warehouse and now features many tables up and downstairs and massive screens to watch live soccer games in the summer.

If you want to spend the day in the sun, check out Platja de la Nova Icària beach, which has volleyball nets and is one of the most kid-friendly beaches in town. You can shop at the Diagonal Mar mall, which has anything you could possibly need. Stroll or bike down the alley between the mall and Poblenou for a sweet time.

Tagged
Trip Planning Barcelona, Spain
What did you think of this story?
Meh
Good
Awesome

20+ Spots for the Best Nightlife in Barcelona

The 8 Best Places To Meet Travelers in Barcelona

Top 10 Things You Can Do for Free in Barcelona