NOT LONG into the train ride between Zermatt and St. Moritz — one of the most scenic, revered, and priciest in Switzerland, if not the world — I looked across the aisle to see a passenger fast asleep. She’d crafted a small pillow from an extra jacket and spread out flat across the vacant seat next to her. Outside, a world of pristine emerald fields, snow-capped Alps, and high altitude glaciers slowly passed her by. As we wound up mountain passes, down valleys and along canyon floors, she was catching a €260 first-class nap.

I was in the same carriage, wide-eyed and terrified I would miss a cow in a field, a clichéd mountain village, or a distant hiker waving to the engine driver.

I wanted to ask the woman why she was sleeping, but somewhere close to the town of Chur her partner gently shook her back to life. She looked up groggily, stumbled down the carriage aisle, and disappeared into a small crowd on the station platform before I had the opportunity.

Swiss rail travel may be the stuff of legends, but it’s clearly not for everyone. I gave myself a week to find out for sure. I equipped myself with a seven-day scenic rail pass, which I was determined to push to the max without total exhaustion and irreparable bankruptcy. Here’s how it went for me and what I can offer you in terms of suggestions.

My first lesson: start in Lucerne. (Or Zurich if you must.)

The most celebrated journeys in Switzerland tend to congregate in the southern reaches of the country. If you’re flying in, you’ll probably arrive in Zurich. But Lucerne, with its scenic rail access south and proximity to the capital, is the ideal starting point.

Both cities are beautiful but prohibitively expensive. A few hundred Swiss Francs will get you a fire-exit view in a 3-star Lucerne hotel, but when you step outside in the early morning light to skip across the covered bridges, or take an afternoon stroll along the old city walls with views of the lake and surrounding mountains, you’ll find it easier to justify the expense.

Then, when you find yourself turning to supermarket salads and dry bread for dinner, you can pack your bags and head out on an incredible route that leaves from the city’s main station )) the GoldenPass Line, and it’s possibly the best value train journey in the country.

Day 1: Lucerne to Interlaken on the GoldenPass Line 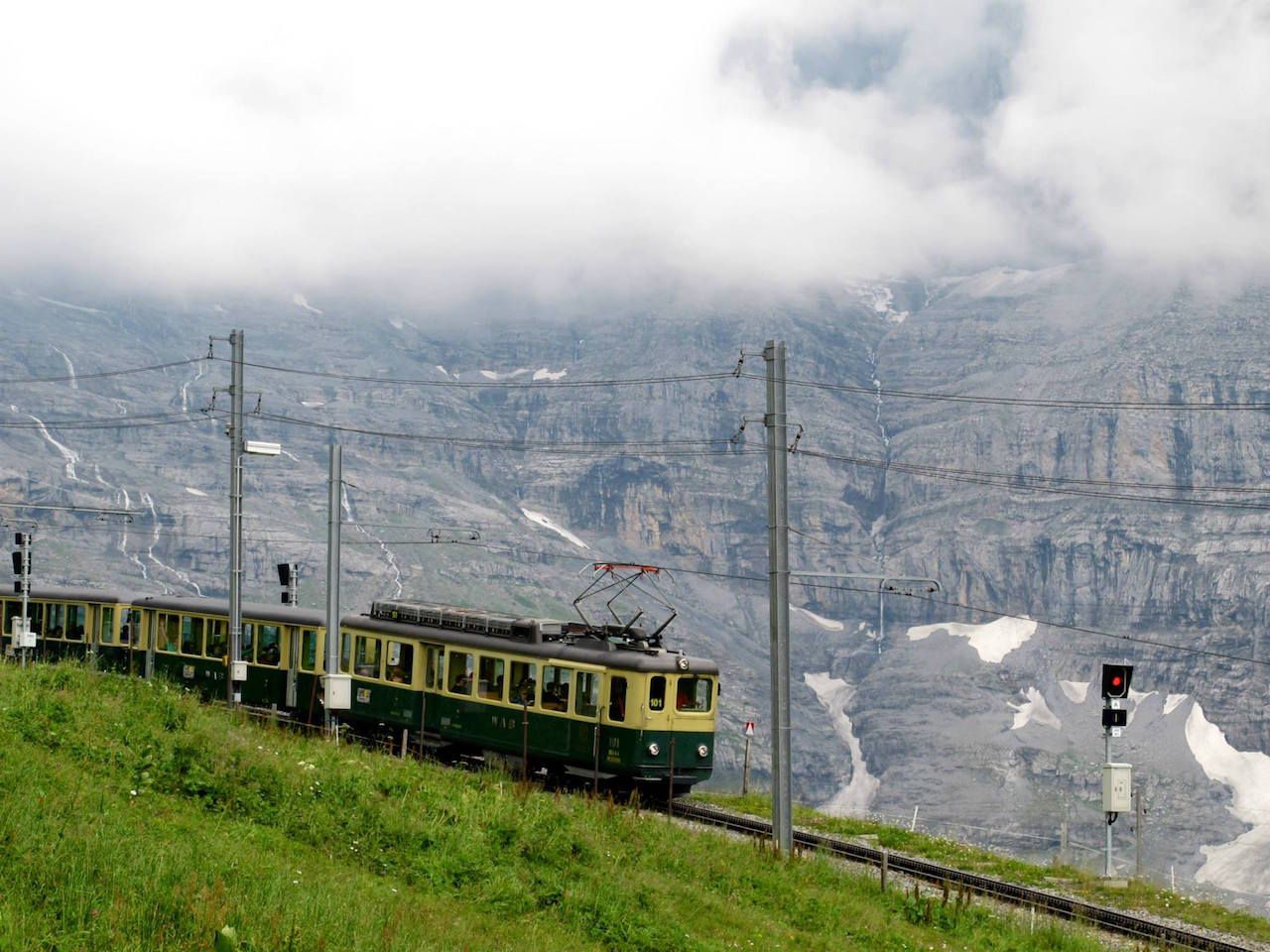 The train ride from Lucerne to Montreux, on the shores of Lake Geneva, is one of Europe’s best. The GoldenPass Line will whisk you through a Swiss highlights package of mountains, fields, rivers, lakes, villages, cities and ski resorts in just a few hours. It’s a commuter route for many Swiss residents, but that doesn’t mean the carriages aren’t well equipped and spotless. If you’re after the full tourist experience, you can also hop aboard one of the daily panoramic trains.

On the way, you’ll go via the lakeside town of Interlaken, which makes for an ideal stopover point. You can take a quick ferry trip on the unspoiled lake Thun or Brienz, which is included in some rail passes at no extra cost, or revel in the touristy nature of this Swiss junction town.

But if you’re in Interlaken, then you’re also just one short train ride away from the most beautifully clichéd Swiss valley of them all — Lauterbrunnen. The train ride isn’t included in most rail passes, but it’s quick and relatively cheap and, at least when I took it, came complete with a jolly uniformed conductor with a bit of a belly who wore one of those train conductor hats without the smallest hint of irony.

In Lauterbrunnen you can walk the quiet town, start a hike to a remote peak in the Alps, take a train to the highest station in Europe, or just crane your neck up and watch one of the dozens of adrenaline junkies whizzing above you in wing suits before dramatically popping their chutes — the sheer valley walls serve as one of the most revered base jump sites in the world.

Day 3: Interlaken to Montreux on the GoldenPass Line

If you thought the previous day couldn’t get any more scenic, just wait until you see what’s in store for you between Interlaken and Lake Geneva. You’ll skirt Lake Thun, circle ski resorts, and journey on seemingly vertical tracks.

Google will tell you to take the faster route via Visp, but ignore them. You want the panoramic train that will take you through beautiful scenery all the way to Zweisimmen.

There, you’ll hop off at a nondescript station, and immediately board one of the most intriguing trains in Europe — the GoldenPass Classic. This train, which feels like a cross between your grandmother’s living room and a five-star French restaurant, runs every day between Zweisimmen and Montreux. 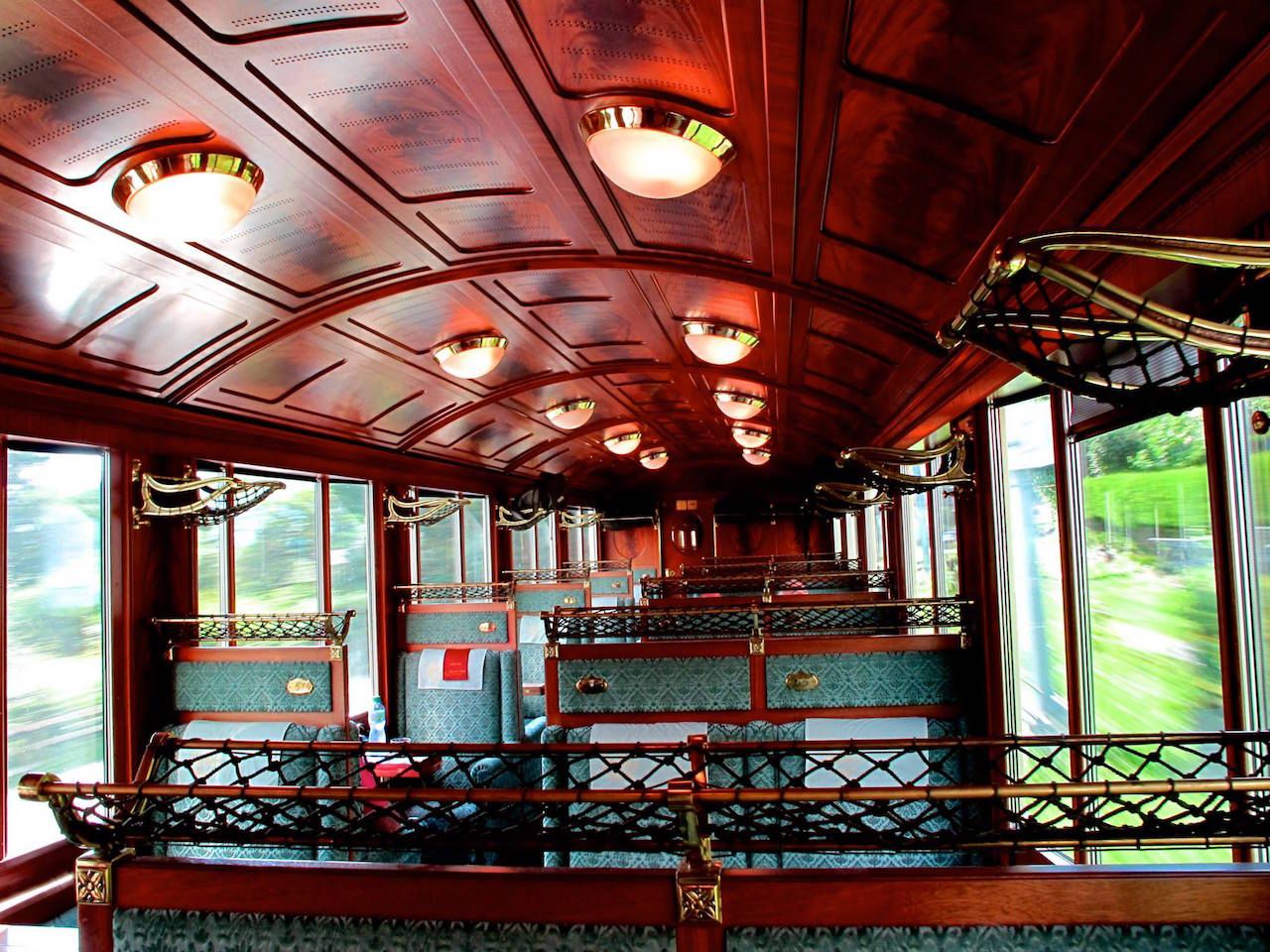 I sat on green felt chairs and stroked soft armrests. Above me were gold-trimmed luggage racks and a curved wood-paneled roof. So impressive are the insides of this carriage that it’s almost hard to appreciate the beauty of the outside world — and then you round that final corner and see Lake Geneva.

Beautiful as Lake Geneva is, if you’re taking this scenic rail gorge seriously, you’ll stop in Montreux or Vevey for a quick lakeside lunch, and then continue on your way to Zermatt. With a bit of an effort, you’ll make it in time for a dinner in the shadow of the Matterhorn — the starting point for your next leg.

Day 4: Zermatt to St. Moritz on the Glacier Express 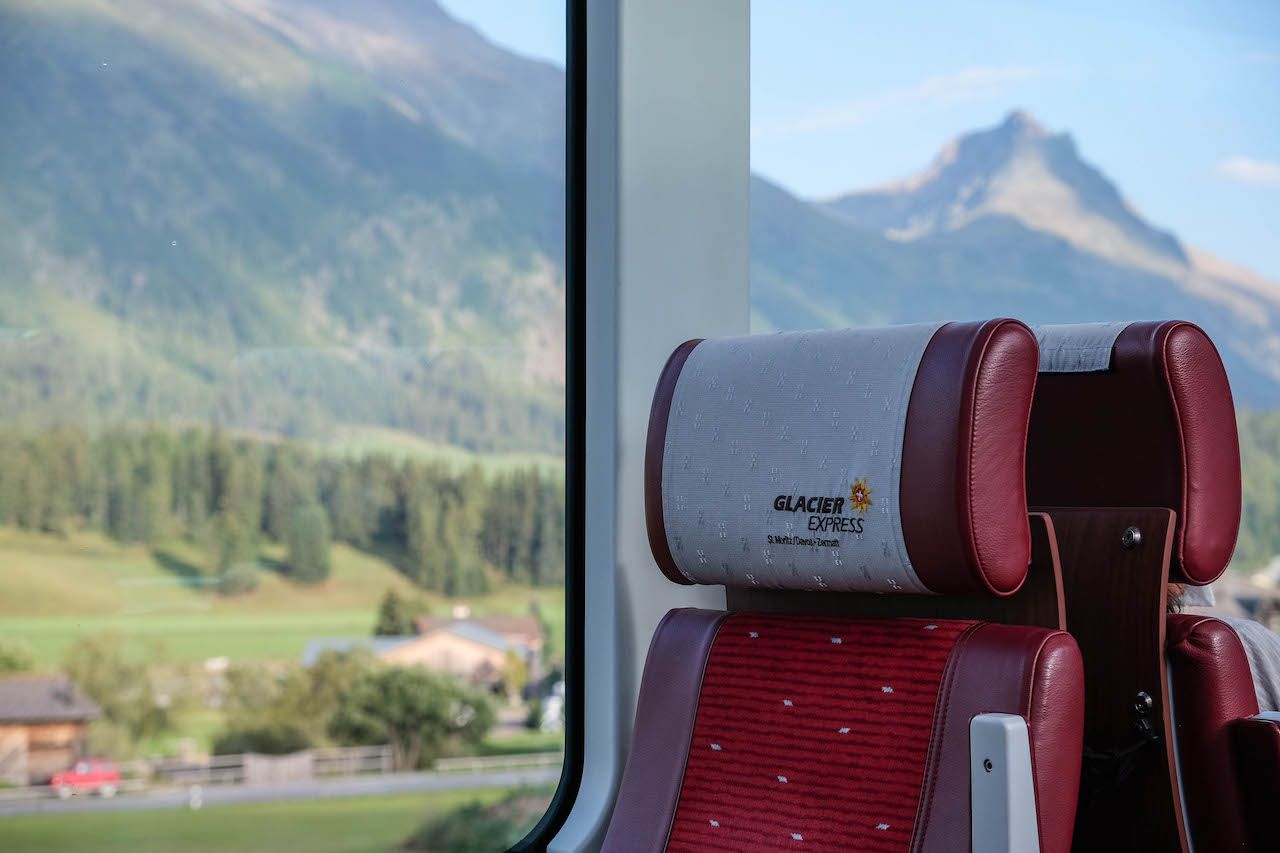 The Glacier Express is the pinnacle of the Swiss rail catalog. Some people call it the slowest express train in Europe. It chugs along at an alarmingly slow pace for much of the eight-hour journey. But you’ll hardly care. The scenery is so pristine and perfect that, unless you’re of a similar disposition to the sleeping woman, you’ll be in near permanent awe.

I’ve been told that in winter it’s a bit like Narnia. In summer, it was like a Swiss-themed Disney World ride. The carriage is as slick as you can imagine — so clean you’ll have to work to find a speck of dirt on the windows, and I would probably eat off the floors, which wasn’t necessary given the at-table service with tablecloths, serviettes, and real life cutlery and crockery.

There are several towns and resorts at which you can alight along the way, but if you’re going all-in on your journey you may as well go the distance all the way to St. Moritz. That way you can tell yourself you’ve just taken the best train ride in the world between the two best Swiss resorts, and feel quite content with yourself for having done so. It also positions you perfectly for day four of this expedition — the close contender to the Glacier Express in the form of the Bernina Express.

Day 5: St. Moritz to Lugano on the Bernina Express 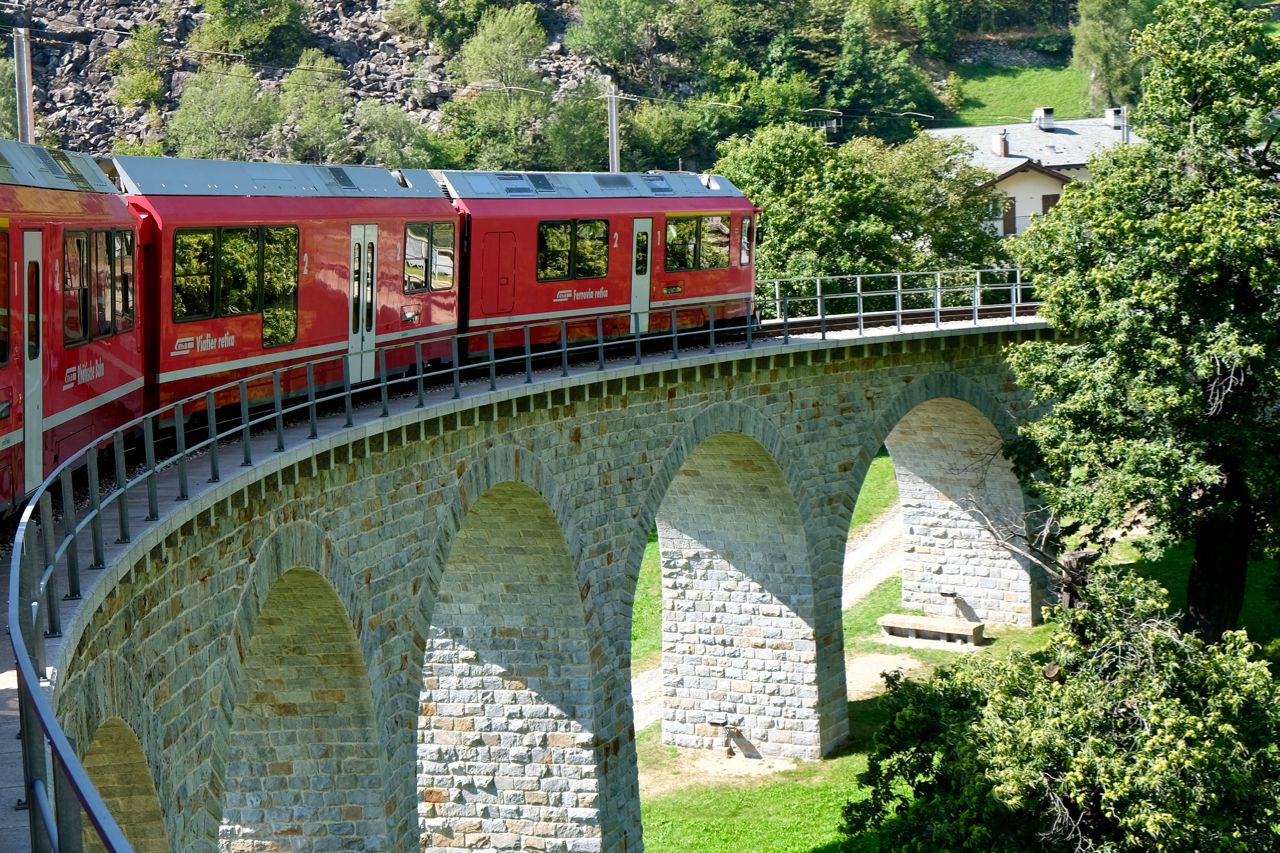 My fifth day started with an early morning sunrise run around Lake St. Moritz. I gorged myself at the hotel breakfast buffet and pilfered a few sandwiches for my upcoming journey over the Alps and down towards Italy. I’d walked into the town late in the evening and booked a night in a pricey central hotel that had a beautiful view of the lake. Also, the Bernina Express may rival the Glacier Express in terms of views and engineering feats, but alas, it lacks the aerial grappa-pouring waiters who deliver 5-star meals to your seat.

Not to worry though because the views from the Bernina are marvelous. There are regular trains that run on this route from St. Moritz, over the Alps, and then dip down towards the Italian border to terminate in Tirano. You can fork up a little more for the tourist trains, or simply hop aboard any other that follows your route. The tourist trains cost more, and in summer, you’re better off not taking them — some of the regular locomotives have open-air wagons that’ll cart you through the Alps like livestock at no extra cost. 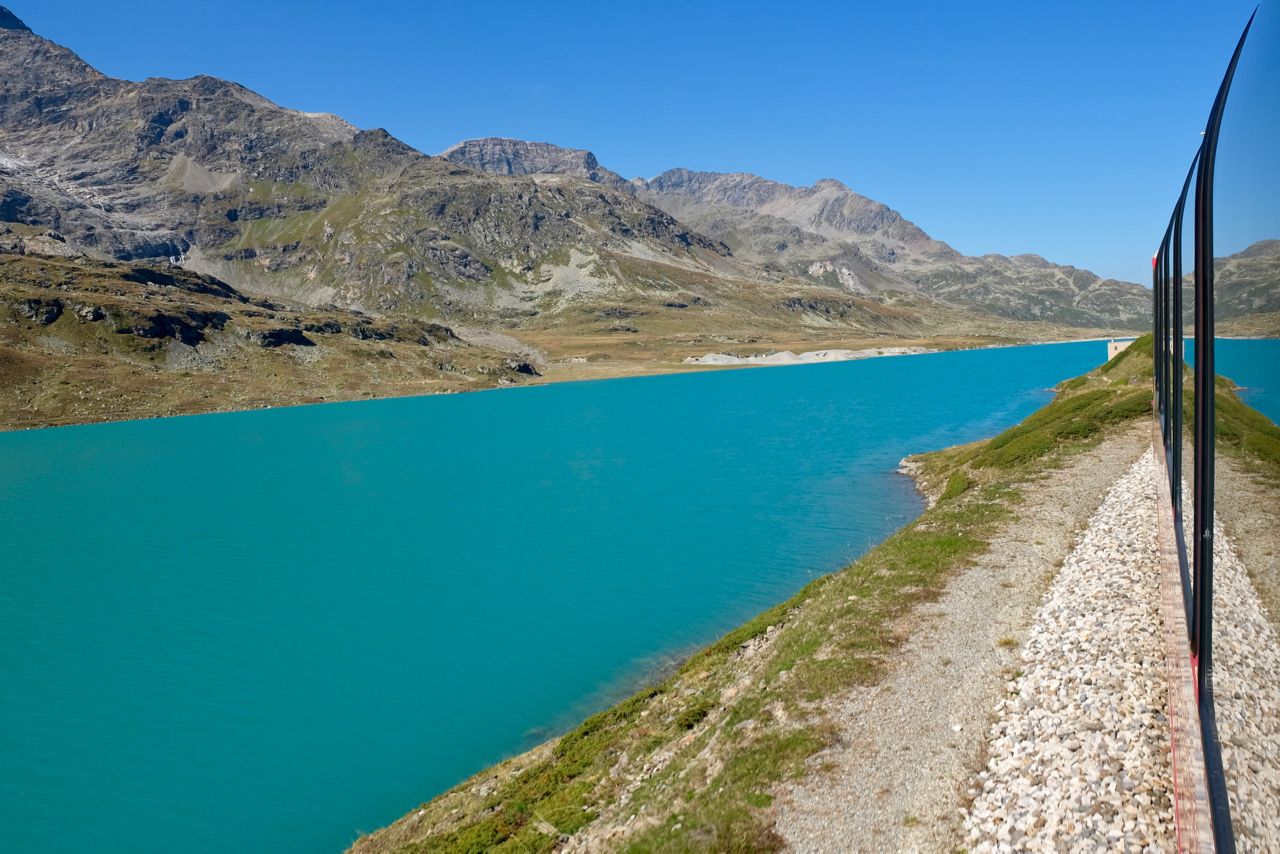 The Bernina Express reaches its peak altitude alongside the White Lake and then dips down to offer views of a stunning glacier called Palü. There is no one scenic climax — it’s pretty much unending for the entire journey. But for many passengers, the engineering achievements are really what they come for — primarily the Brusio spiral viaduct that corkscrews above a green field in a kind of last hurrah before the end.

If you want to spend some time in Italy, you can always overnight in Tirano. If you consider overnight stops to be a sign of weakness, hop directly onto the Bernina Express busses waiting at the station nearby. These cram a few dozen pre-booked passengers into bouncy seats and then whizz around the edge of the famous Italian lakes in an alarming fashion, all the way to yet another lakeside Swiss town, Lugano.

Day 7: Lugano to Lucerne on the Gotthard Panorama Express

By the time I’d ridden the Glacier Express and the Bernina Express, along with the three-hour Lugano bus ride, I could relate to the sleeping woman on the train who’d drawn my disrespect. A third day on the tracks and I may well have been tempted to nap through the journey. So I took an off day in the town of Lugano.

I found affordable accommodations on a hill overlooking the lake and city. It was a steep sweaty walk away from everywhere, but it shared a pool with the fancy hotel next door. And after five days of sitting on my backside watching the world float on by, I could hardly complain.

Not much seems to happen in Lugano unless you own a yacht, but it’s the kind of place in which you’ll happily sit on a lakeside bench for a few hours watching swans and watercrafts cavort on the shimmering waters. 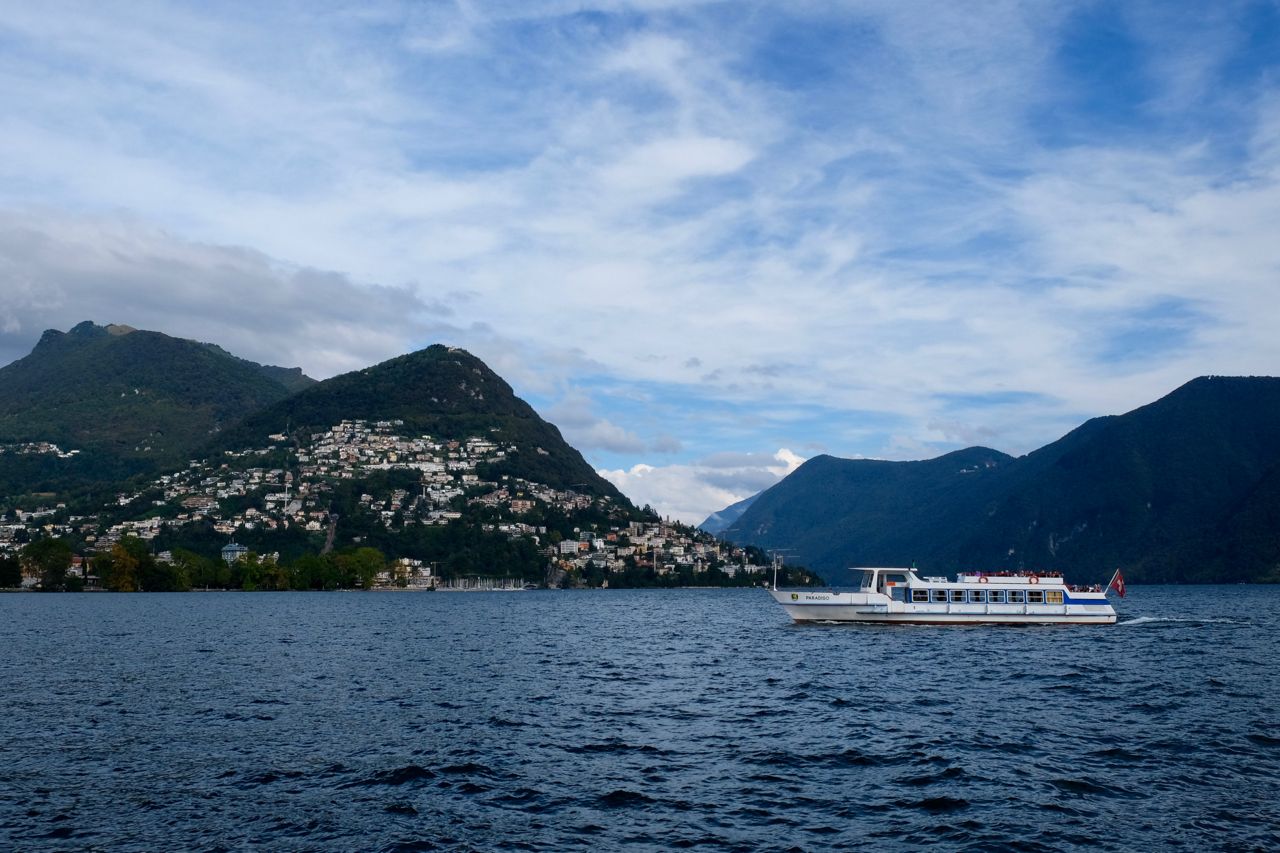 It was also here that I made my biggest judgment call of the trip — one that I think I got wrong. The Gotthard Panorama Express, previously called the Wilhelm Tell Express, was the last big scenic route left on my list. It runs daily between Lugano and Lucerne — completing the perfect scenic Swiss rail itinerary. This journey combines a boat ride, mountain passes, and the Gotthard railway tunnel. But it also required way too many Swiss Francs — even with a rail pass. I bowed to the financial pressure and failed to complete the ultimate Swiss rail expedition.

Instead, I took the regional train back to reality in Lucerne. It was also a beautiful trip, included the usual fresh water views, mountain peaks, and astounding engineering feats. After living a life of scenic rail luxury for the better part of a week, I thought it important to rough it in commuter class to see how the other half live in Switzerland. Which, unsurprisingly given the country I was in, was not half bad either.

Travel13 reasons you need to see Europe by train
Tagged
Trip Planning Switzerland
What did you think of this story?
Meh
Good
Awesome

The 7 most epic Matterhorn experiences

The 7 most adorable villages in Switzerland

The Glacier Express is the most scenic train ride in Europe

5 things US cities can learn from Bern, Switzerland

Charmey is the ultimate mountain town for exploring the Swiss Alps