There is something deeply hypnotic about watching a fire blazing. Anybody with a fireplace, a wood stove, or a love of campfires knows what I’m talking about — you can just sit for hours looking at the flames dancing. I have developed a theory about this fascination: fire, despite being dangerous, is at the core of our humanity, and somewhere deep inside the layers of our brains, we remember it as the true beginning. The same goes for volcanoes. If you’ve ever watched the footage of a volcano erupting, you know how hard it is to take your eyes away from it. You know it’s deadly, but the spectacle is a reminder of where we come from, of the rawness and fragility of the planet we are temporarily living on. Lucky for us, there are active volcanoes out there that we can explore and observe up close. They are only a hike, a boat ride, or a cable car away, so get off your seat in front of the Yule Log and go witness the Earth’s fiery power. 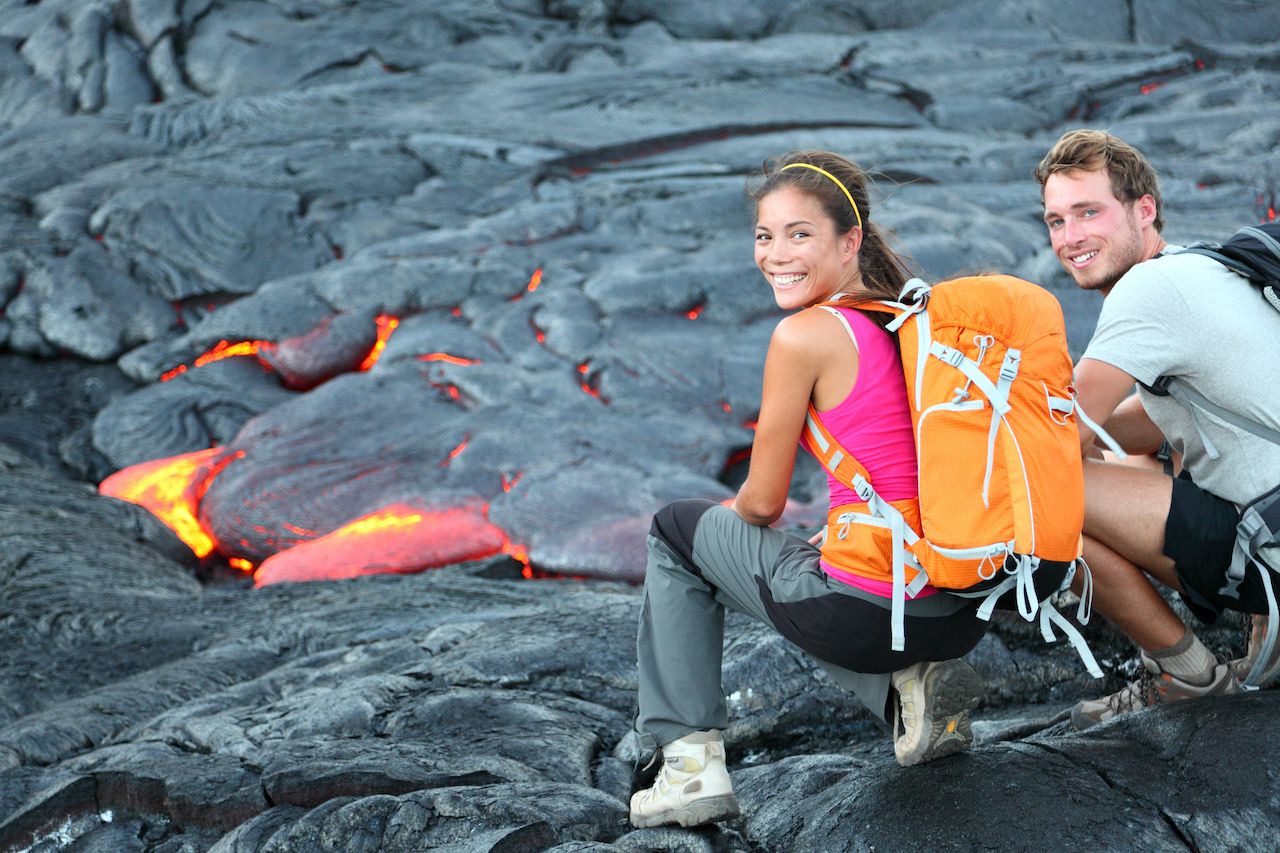 There are not one, but three active volcanoes located on the island of Hawaii (Hualalai, Mauna Loa, and Kilauea) and you can easily check them all out. That said, Kilauea is the only one of the three that’s been erupting continuously since 1983 — the other two have not erupted in a little while — so this is the one you want to focus on.

There are many tour companies that will take you on boat rides to witness the Kilauea lava flowing into the ocean. Note that the lava does not enter the ocean every day, so you should check the status of the volcano before heading all the way there.

You can also check out the steaming craters of Kilauea and the flow of lava on land. 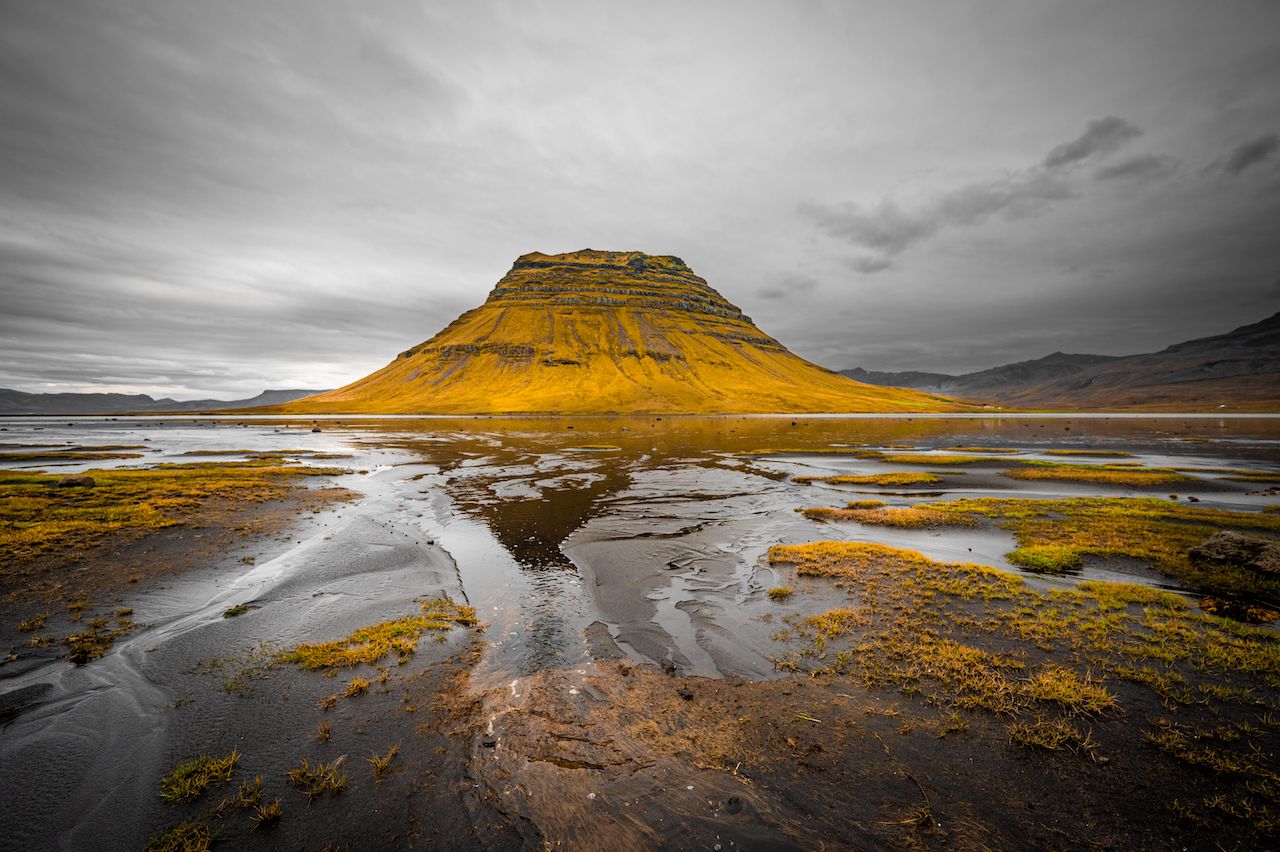 There are enough volcanoes in Iceland for you to hike them for the rest of your life (130), but if you want to check out the most active volcanoes on the island, Katla, Hekla, and Eyjafjallajökull are the ones to conquer.

Now, both Katla and Hekla (the Angry Sisters) are about to burst, so it is highly recommended that you don’t summit them. Volcanoes are cool and all, but we don’t want you to die in horrible circumstances while trying to cross something off your bucket list.

You can hike the infamous Eyjafjallajökull (the glacier that caps the top of the volcano), but only as part of a guided tour. Even then, as of winter 2018, there are many new large crevasses that are quite dangerous, so you may have trouble finding someone to take you there (even on a Jeep tour). Whatever you do, don’t go without an experienced guide; it’s not worth taking a chance.

What you can do, however, is hike the 15.5-mile Fimmvörðuháls trail that is located between Katla and Eyjafjallajökull (you can do it in one day or two days depending on your fitness level and your preference). You get to see two volcanoes in one hike and you remain safe. Jackpot! 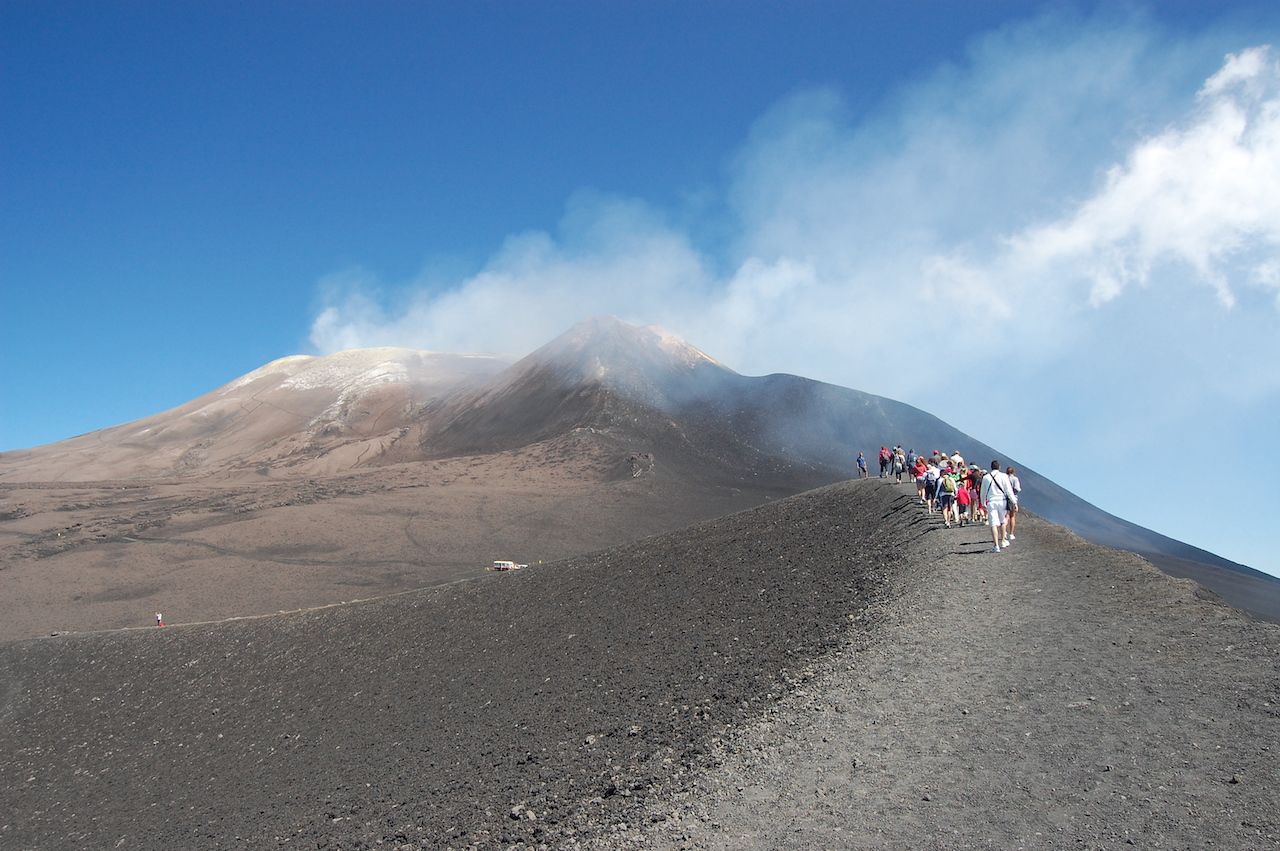 Mount Etna is the second most active volcano in the world after Kilauea and the largest volcano in Europe, so if you’ve got “getting to the top of an active volcano” on your travel to-do list, this is a good one to consider bagging.

In the summer, hikers can check out the steaming craters in the summit area of Mount Etna (you can also see the lava flow when the volcano is very active) from the south and the north entrances.

From the south entrance:

There is no way to hike to the very top of Mount Etna (meter 3300) without a private certified mountain guide that you would have arranged in advance.

From the north entrance: 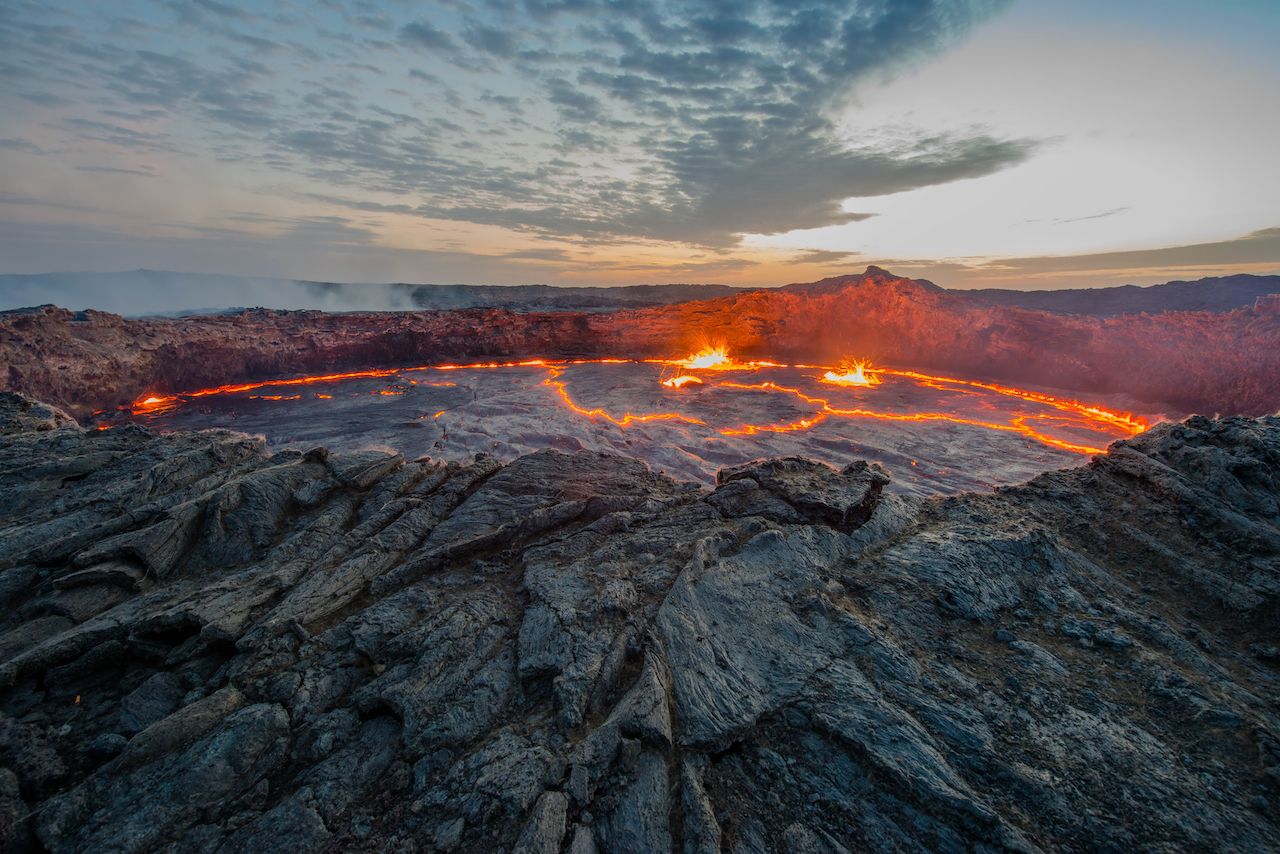 The Afar region of Ethiopia is not the safest in the world, so all treks to Erta Ale have to have an armed escort. This is not a trip you want to take on your own anyways — the hottest place on the planet is not hospitable in any way, so don’t try to play it cool, you might just end up dead.

From the Danakil Depression, you will take a multi-hour, rough 4×4 journey to a base camp and a three-hour hike to the volcano. The hike takes place after sunset because exerting yourself in the unbearable heat characteristic of this region is a recipe for disaster. You’ll spend the night at a rustic camp at the top (don’t expect a luxurious glamping setup, there is no toilet, and you’ll sleep on very thin mats under the stars).

The sight that awaits you is clearly worth the risks, the discomfort, and the heat. The lava lake bubbling and spitting is mesmerizing. 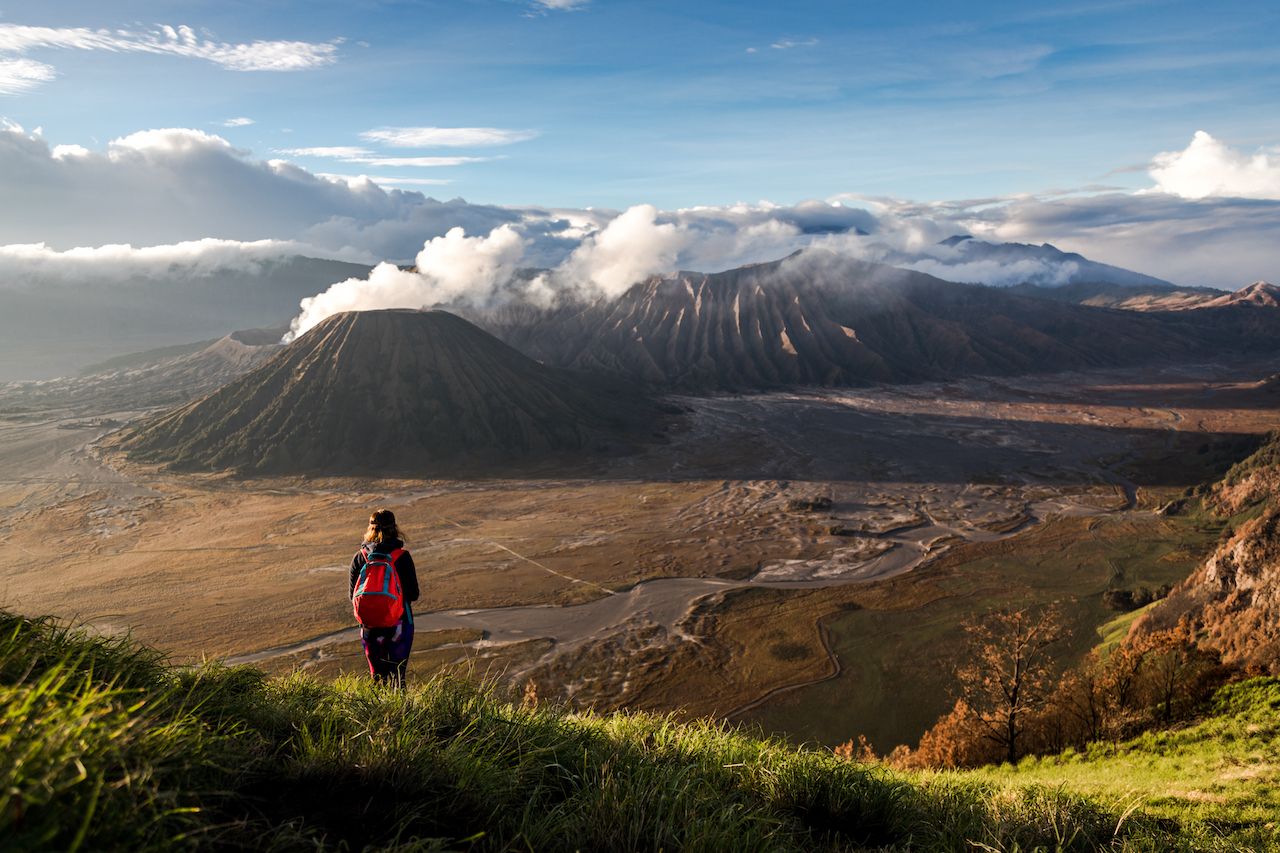 Mount Bromo is what you expect a volcano to look like — it’s constantly smouldering and the surrounding area look like a moonscape. It’s also in East Java, Indonesia, a region well known for its volcanic activity.

To get to Mount Bromo, you first need to reach Cemoro Lawang, the village on the edge of the Bromo Tengger Semeru National Park. You can get to Cemoro Lawang by public transport or private car.

You can book a tour from Cemoro Lawang to Mount Bromo or head there on your own. If you decide to make it a budget-friendly, independent adventure, from the village of Cemoro Lawang, it’s a 3-hour easy walk in sea sand and up steep stairs to the crater. 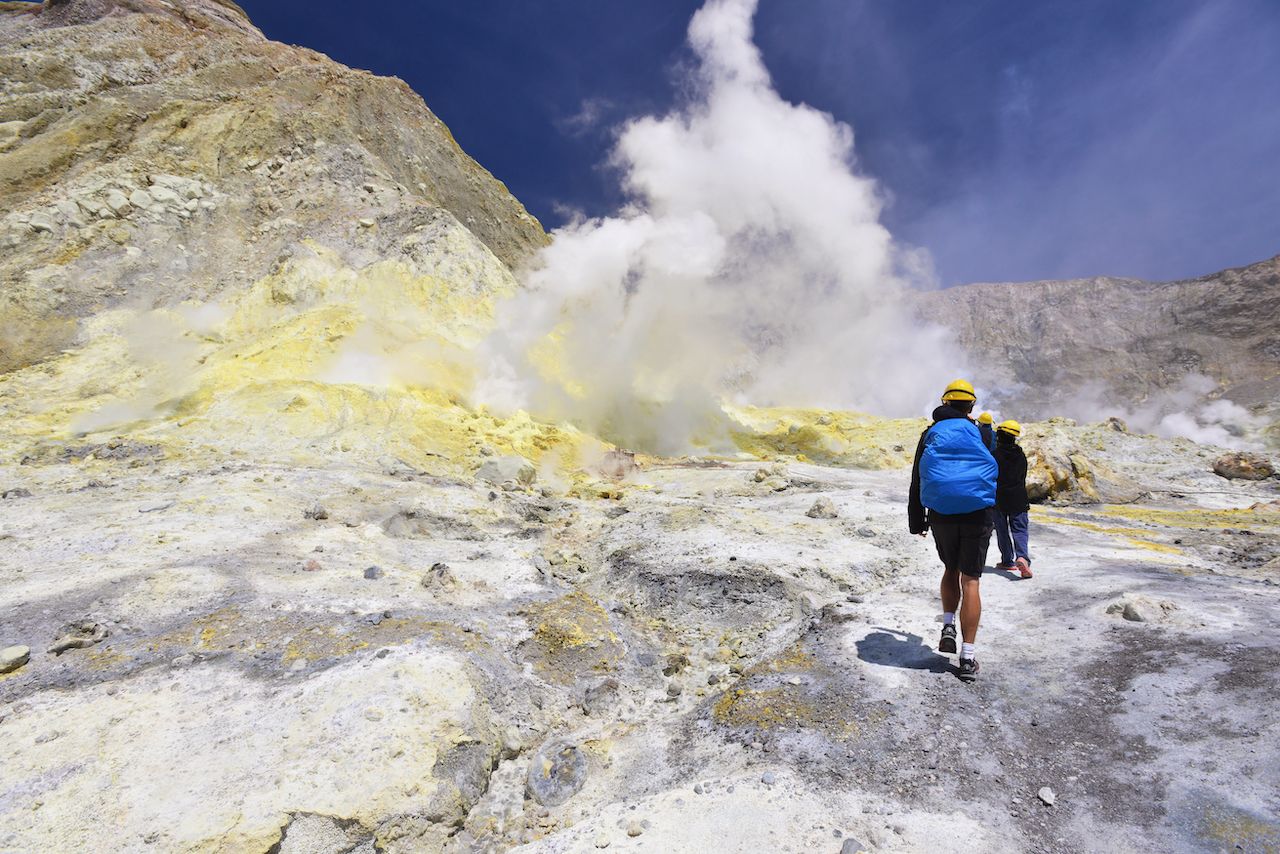 If you thought New Zealand’s beaches and mountains made it the cool kid on the block, you have not seen anything yet. The country has the world’s most easily accessible active volcano — an island 30 miles off the shore of the North Island in the Bay of Plenty.

To visit Whakaari you can take a chopper (get ready to pay through the nose) or take a 90-minute boat tour from Whakatane (still expensive, but much more reasonable and you may be able to see dolphins and whales on the way there). Both options provide a guided tour.

Because this is a marine volcano (most of it lies beneath the ocean), there is no hiking needed — you’ll be dropped off right into the crater. You’ll have to wear masks and hard hats for safety purposes — the last eruption was in April 2016, so you’re never too cautious when hiking around the crater of an active volcano that’s constantly releasing sulphuric acid.

The place is super colorful (yellows, greens, reds, and blues all over the place) due to the levels of sulphur on the island and it’s steaming like a good active volcano should.

Insider Guides3 Amazing Volcano Hikes You Have To Try
Tagged
National Parks Insider Guides
What did you think of this story?
Meh
Good
Awesome