Seeing the peaks of Germany, Austria, and Switzerland while strolling along cobblestone streets in an Alpine city is one thing. But when you hike in the mountains themselves — when you feel the paths beneath your feet — you’ll get to know them as they’re meant to be experienced. And while the 750-mile-long range is home to hundreds of trails worth exploring, the six spots below are hard to beat. 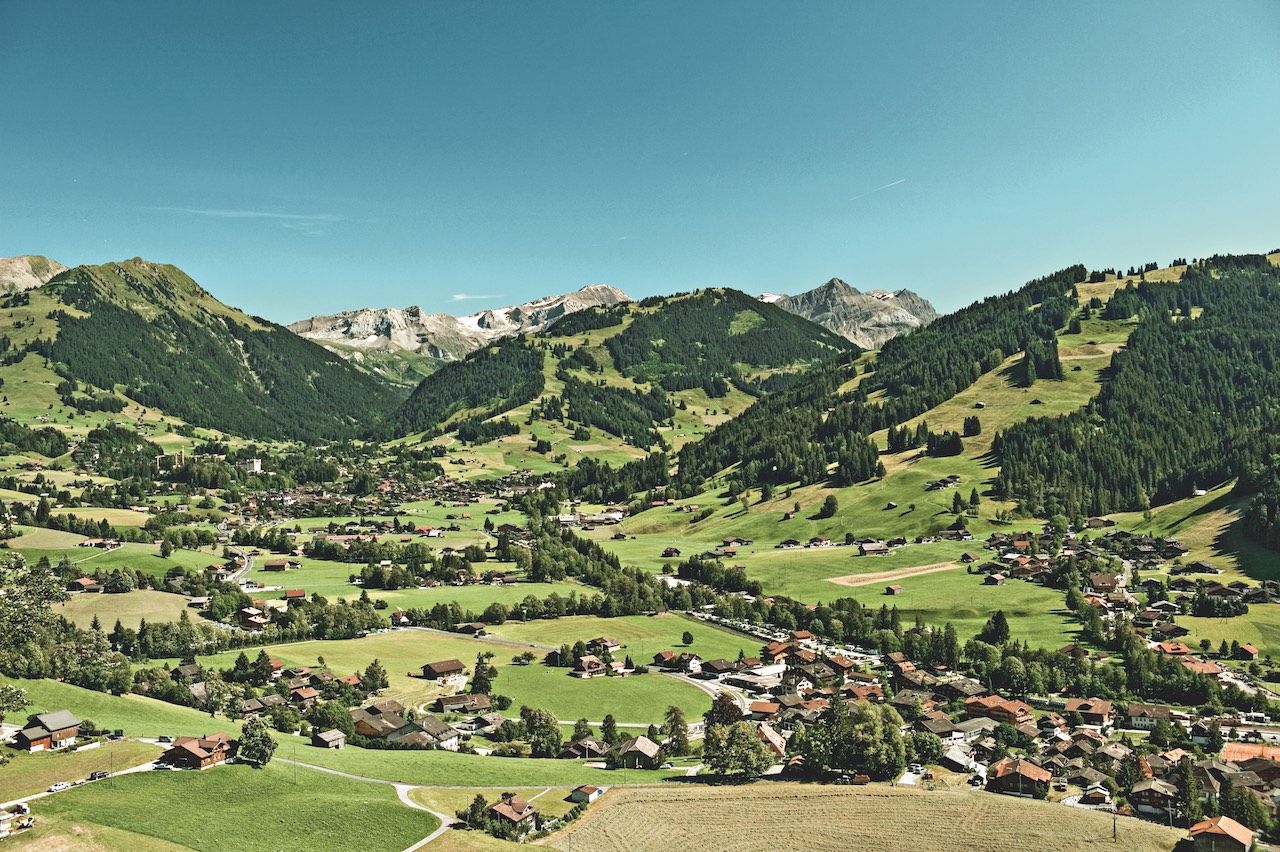 Gstaad is all about top hotels, gourmet restaurants, and lavish chalets — Switzerland at its most luxurious and most extravagant. It’s also Switzerland at its most beautiful, surrounded by small villages, hiking trails, and rustic mountain huts that balance out the ritzy vibe. One of the mottos here is “come up and slow down.” That’s easy enough to do, considering there’s nearly 200 miles of hiking trails in the area, and you can reach most trailheads by taking Gstaad Mountain Rides (the local network of lifts and cable cars), train, or bus.

The main route you’ll want to learn more about is the Alpness Trail, a loop that covers a total of nearly 100 miles (and almost 40,000 feet of climbing) through Boltigen, Zweisimmen, Lenk, and Gstaad. Most people choose to hike “sections” — though you certainly could tackle all of it if you wanted.

From Gstaad, sections 10 (from Arnensee to Chalberhöni) and 11 (Chalberhöni to Grubenberg) are easiest to reach, and you’ll find tons of Alpine flora and fauna along the way — rolling meadows covered in flowers, marmots, and ibexes. You’ll also get a chance to check out the architecture in the village of Saanen, and you’ll pass the invisible Röstigraben (the Rösti barrier), separating German- from French-speaking Switzerland.

Additional tip: For something that’s less of a trek, look to the 13 cultural and themed trails all around Gstaad (Cheese Fondue Trail, anyone?). Some start in town, some farther away, and they range from about one to 12 miles in length. Even the shortest are well worth it for the pure joy of walking through the Alpine countryside. 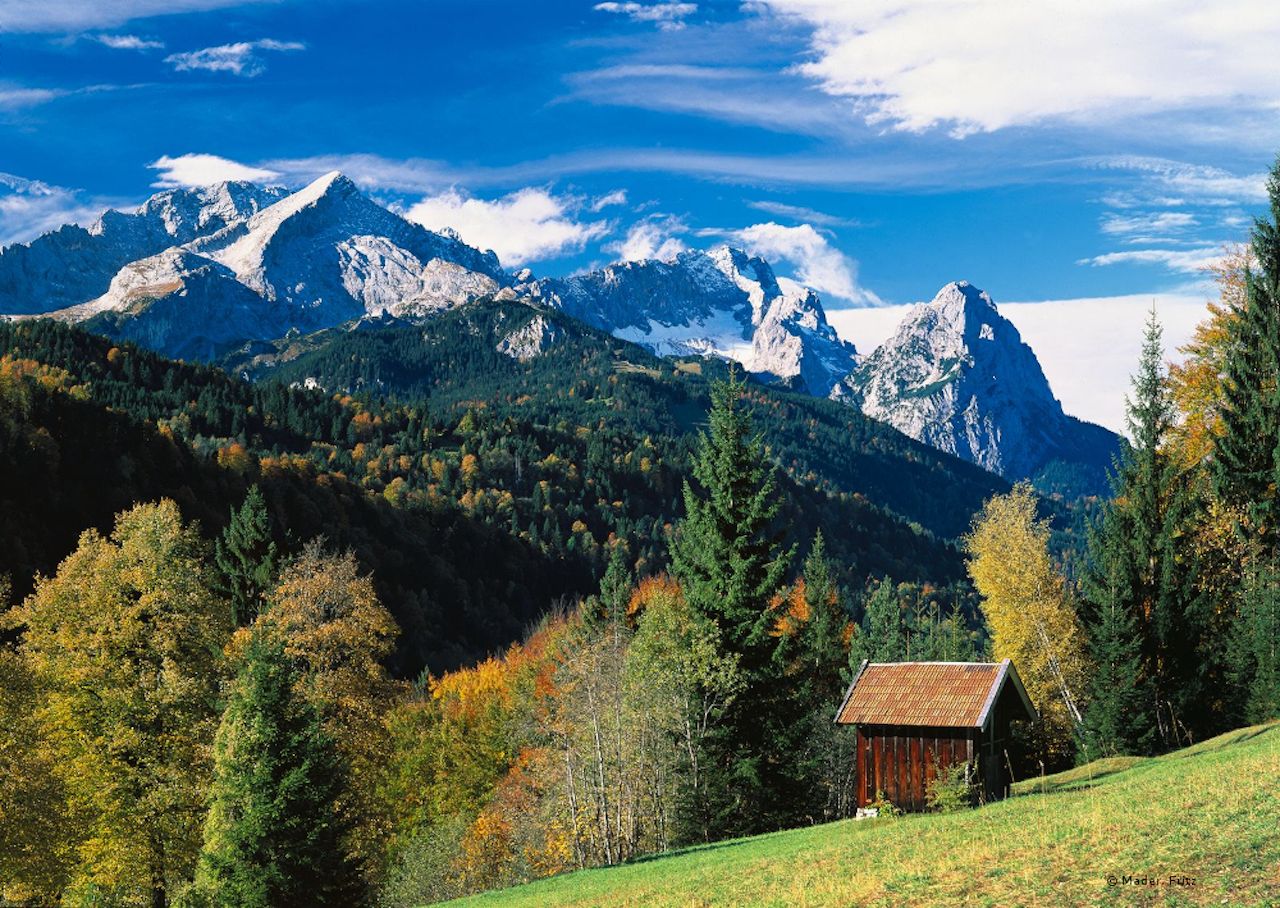 At 55 miles from Munich and roughly 40 miles from Austria’s Innsbruck, Garmisch-Partenkirchen doesn’t just lie in the Bavarian Alps — the city sits at the foot of the Zugspitze, the highest peak in Germany. This isn’t about summiting, though. “GaPa,” as Garmisch-Partenkirchen is often called, has an extensive network of trails spanning 186 miles, inviting you to “discover your true nature,” as the town’s motto goes. The paths here are incredibly well marked, a full 68 miles of them are groomed in the winter, and it’s all easily planned beforehand using the online GaPa Tour Planner.

Two highlights around GaPa are definitely the King’s House (Königshaus) and the Partnach gorge. The gorge has fantastic waterfalls, rapids, and horse-drawn carriages. Come at night for a guided torch-lit expedition. Meanwhile, the best way to get to the King’s House is the King’s Path (Königsweg). It starts from the Elmau parking lot and runs along the Koitaboch (cold creek) and across the Wettersteinalm Alm (an Alpine meadow) to the King’s House on Schachen mountain.

On first glance, the Königshaus doesn’t look like you’d expect, especially if you’re thinking along the lines of Neuschwanstein castle. It was built in a Swiss-influenced chalet style — at least on its outside. Inside, though, the whole upper level contains the “Moorish Hall,” decked out in opulent golds, reds, and blues. King Ludwig II retreated here to celebrate his birthdays, and such an architectural oddity is right in line with his “Fairy Tale King” character. 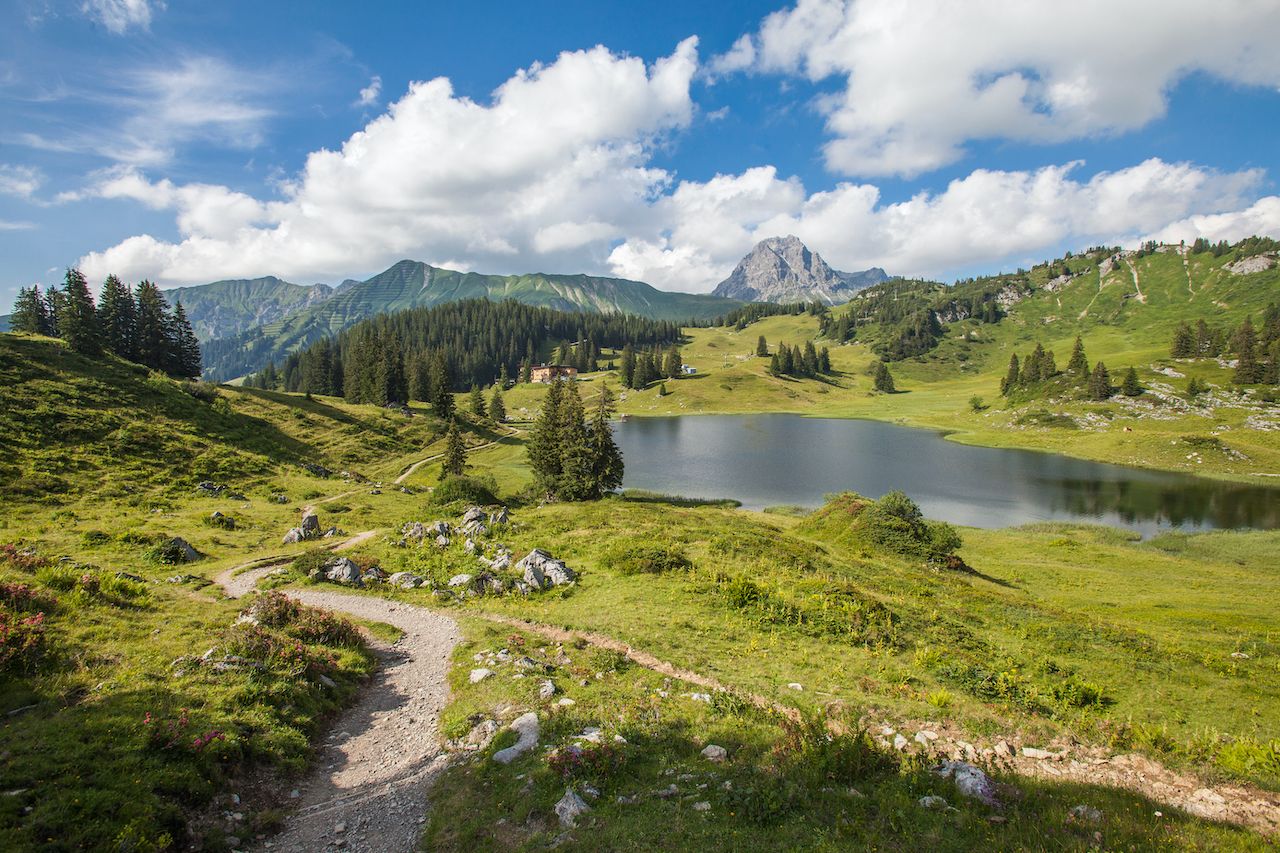 The Arlberg mountain range lies between the Austrian states of Vorarlberg and Tyrol. Its highest peak is the Valluga, which rises to over 9,200 feet above sea level. With most trails at comparatively moderate elevations (emphasis on the comparatively), the region is less of a hardcore adventure than hiking a glacier or the Matterhorn might be, but it’s a great place to explore the mountain air.

The three main hikes here are the Lechweg, the Grüner Ring (Green Ring), and the trails around St. Anton — here’s what you need to know:

Finally, for those considering a longer trek, the Arlberg is the end point of the Adlerweg, or Eagle Walk, which crosses all of Tyrol — (it’s 256+ miles and covers over 100,000 feet of cumulative elevation). You might want to set aside a decent chunk of time for this one. 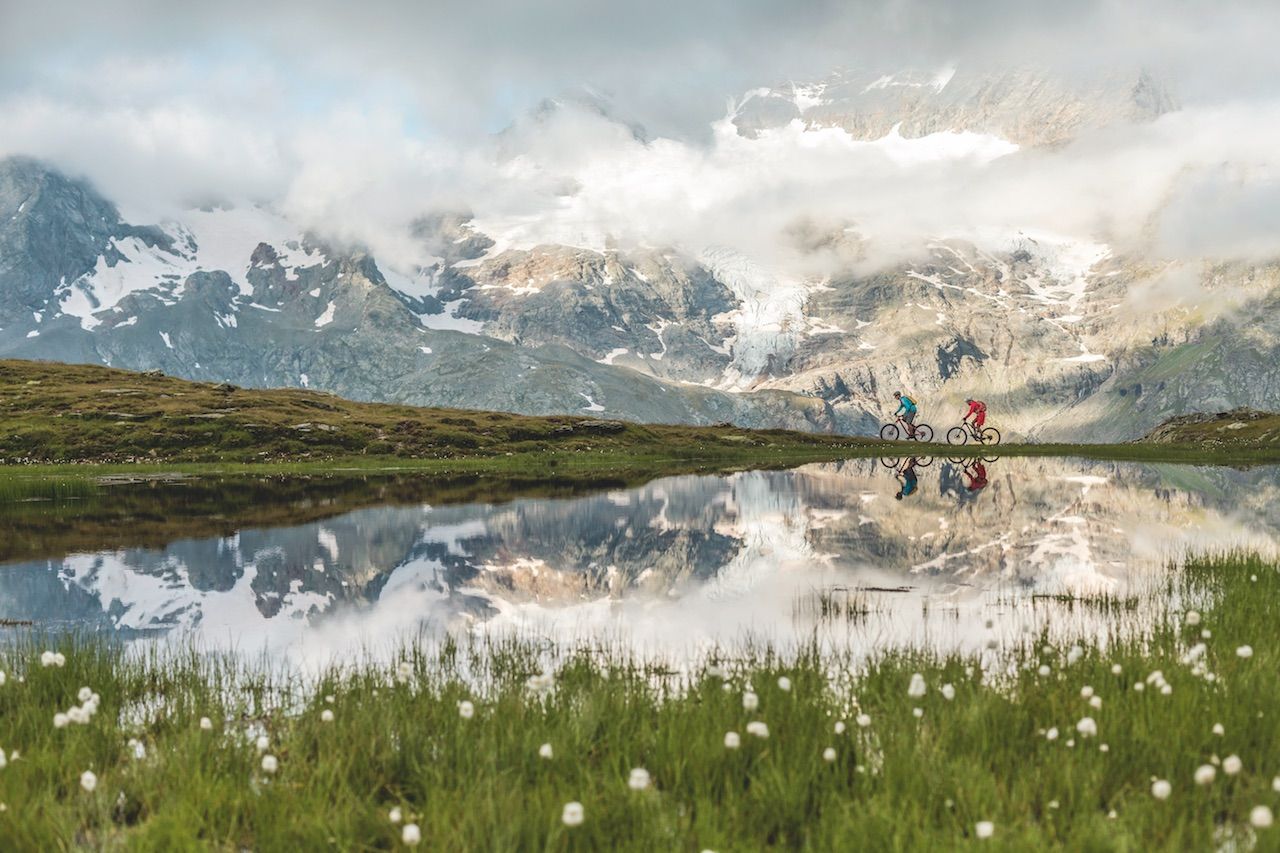 Using funiculars or cable cars (check for deals in regional hotels), it’s pretty easy to get up onto three different peaks around 10,000 feet near St. Moritz: Piz Nair, Corvatsch, and Diavolezza. Of course, this isn’t about riding cable cars, this is about hiking — and there are plenty of trails here taking you up, back down, and around these peaks, all with beautiful views across Upper Engadine’s lake region. And if your legs gets tired, you can always cut the trip in half by hiking up and taking the cable car back down.

But for a real adrenaline rush, experienced adventurers (with a guide, preferably) book it to the nearest glacier — this area is home to some of the finest chunks of ice in the Alps. You’ll want to make this trip soon, though, as glaciers around the world are retreating. Even the largest glacier here, the Morteratsch in the Bernina, no longer reaches all the way down to the railway station as it once did.

If you’re really aching for some good travel stories, check out the legendary Bernina Trek, where you can hike for days, stopping at mountain huts along the way. Via Engiadina is another long-distance trail in the area — it follows the Upper Engadine valley floor past Alpine villages, refreshing creeks, and seemingly endless forests of pine and larch. Otherwise, a bit farther away — just over 30 minutes by car — is Swiss National Park. There, nature is allowed to run its course, and 50 miles of hiking trails through the Swiss wilderness will keep you busy. 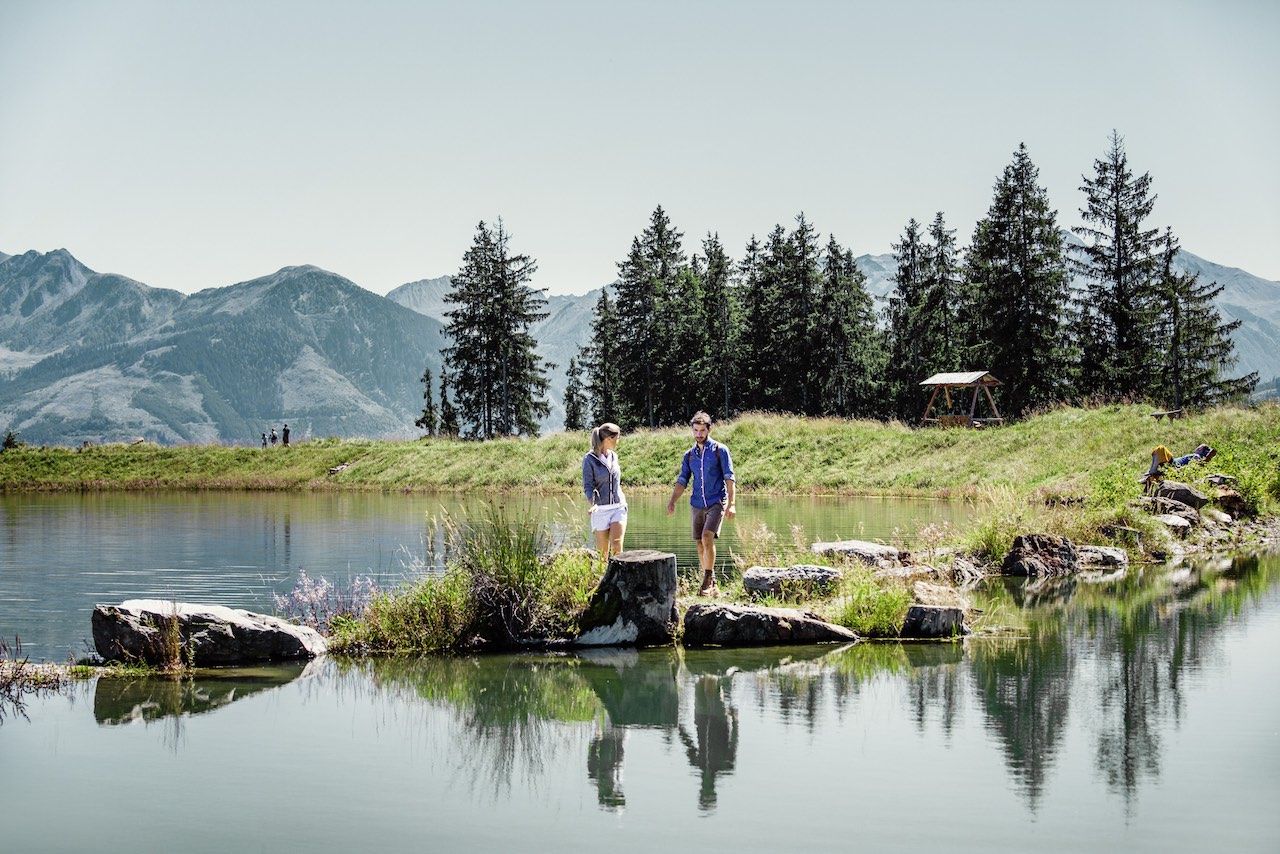 The “am See” of the town’s name simply means that it’s by a lake — but it’s one heck of a lake. It’s become pretty popular with visitors, and one look into the mountains up towards the Grossglockner, Austria’s tallest mountain, and you’ll understand the appeal.

There’s really only one problem when it comes to hiking here: which trek to choose. There are tons of shorter and several solid long-distance options in this part of the Alps. Here are three suggestions: 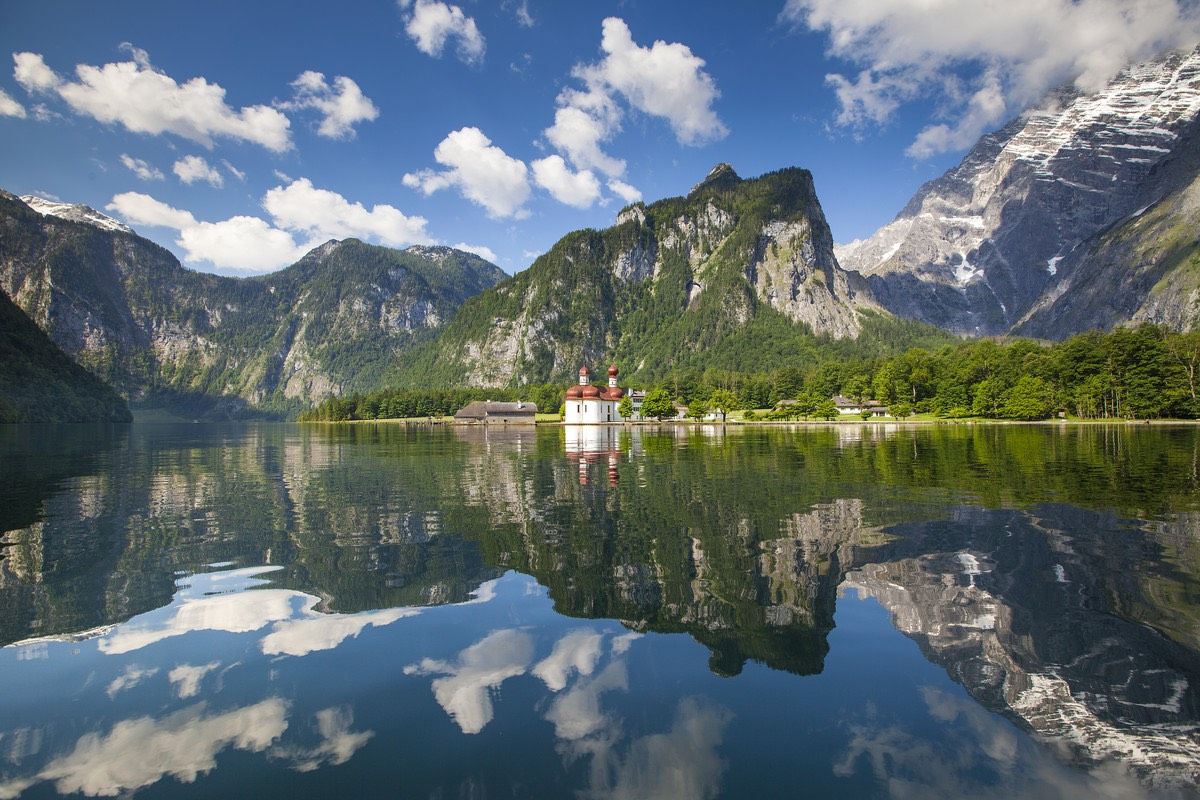 Easily the most historic of these hiking spots, Berchtesgaden was an important town ages ago thanks to its salt deposits. Bavarian kings began visiting the town and its surrounding region in 1810, and the area’s been running strong since.

History aside, though, the landscape surrounding Berchtesgaden is a particularly beautiful part of the Bavarian Alps — just about anywhere you go, you’ll get an awesome view of Watzmann Mountain and Königssee lake. Berchtesgaden National Park is right here too, and it’s on the list of UNESCO Biosphere Reserves.

For hikes, an easy way of getting to know the area and its deep history is by trekking the four-mile Soleleitungsweg, the trail along the brine pipeline (formerly used to bring the washed-out salt from mine to refinery). But for a far more intense hike, nothing beats exploring the peak of the Watzmann, traveling from hut to hut through the heart of Berchtesgaden National Park. It can take a few days, but if you spend longer, just sitting in the meadows and taking in the scenery, no one would blame you. The Alps have that effect on most of us.

This post is proudly produced in partnership with the German National Tourist Board, Switzerland Tourism, and the Austrian National Tourist Office.
Tagged
Hiking National Parks Insider Guides
What did you think of this story?
Meh
Good
Awesome

Where To Go for Carnival if You're in Europe