Nothing inspires artists more than jaw-dropping natural landscapes, and New Mexico has those in spades. Perhaps that’s why the Southwestern state has been making art for millennia — from the cave walls of ancient civilizations to artists like D.H. Lawrence and Georgia O’Keeffe, the New Mexico art scene has never, ever run dry. In fact, it’s only getting bigger.

And we’re not talking art museums. Here are six mind-blowing experiences that go well beyond your standard picture frame, for when you’re craving a dose of wonder and inspiration. 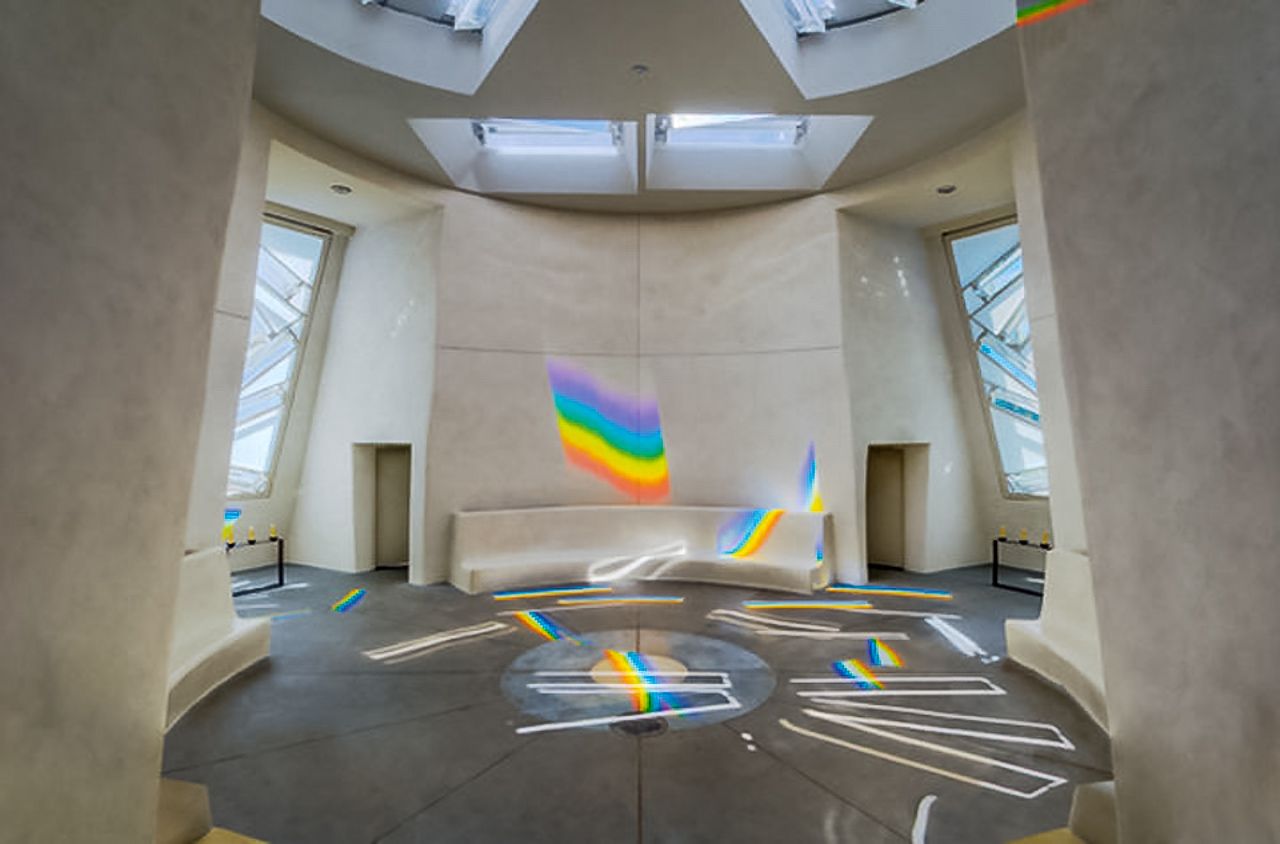 The Dwan Light Sanctuary bills itself as a “public art space,” but a more apt description might be part permanent art installation, part temple. Ever-changing lights are cast on white-washed walls, and the idea is for you to spend your time (often hours) contemplating light, sight, and the nature of color in our world.

The structure itself seems built for meditation and reflection — it’s not uncommon to see someone draped over the adobe-esque benches built into the white walls or seated cross-legged in an unfurnished corner. What’s more, prisms are positioned throughout the building to separate the incoming sunlight, casting rainbows and geometric shapes every which way. These simple yet profound features pose two questions: What raw materials are needed to create art? And what is our relationship to the aesthetic world?

The Dwan Light Sanctuary is a 15-minute drive from the heart of quirky Las Vegas, New Mexico, and it’s open to the public from 6am to 8pm to chase the desert light. The space also hosts concerts and events; appropriately enough, Philip Glass is among the musicians who have performed in this unique venue.

Located on the edge of Sandia Park, on the other side of the mountains from Albuquerque, Tinkertown might as well be considered a town in and of itself for the size of its reputation. If you’re road tripping through the state, at some point someone will ask you, “Have you been to Tinkertown?”

That’s because the eccentric hobbyist Ross Ward made a name for himself worldwide. In what seems to be almost a performance piece, Tinkertown shows what a lifetime dedicated to crafts and creativity can produce. “I did all this while you were watching TV,” he famously said of the array of bobbles and oddities that overflow the museum, now run by his wife. But really, it feels more like a living, breathing Rube Goldberg machine.

The vibe of Tinkertown is anything but pretentious. Ward didn’t think he was making a gallery — or anything of much interest to the rest of the world — during the time he was compiling his “artwork.” Rather, Tinkertown is a reminder to all artists to just invest time in themselves.

Mesilla, near Las Cruces and a little under an hour from El Paso, TX, is a town of under 2,000 that packs a punch. On the edge of the town’s plaza (a state monument itself) is the historic Fountain Theatre, which has been hosting films since 1905. Just visiting is an arts experience all its own, thanks to the classic 20th-century aesthetic, but you don’t get the full vibe until you’re two hours deep. Movie-goers can purchase popcorn (with real butter!) or enter with a glass of wine through the side door from the neighboring restaurant.

Hosting the occasional very artsy film festival and showing independent and foreign films seven days a week, the Fountain Theatre reminds us — in a time of blockbusters and Redbox — what it must have been like to encounter cinema as an art form 100 years ago. Walk into their teeny muraled theater (with some fancy wooden chairs in the back) and you’ll see for yourself. 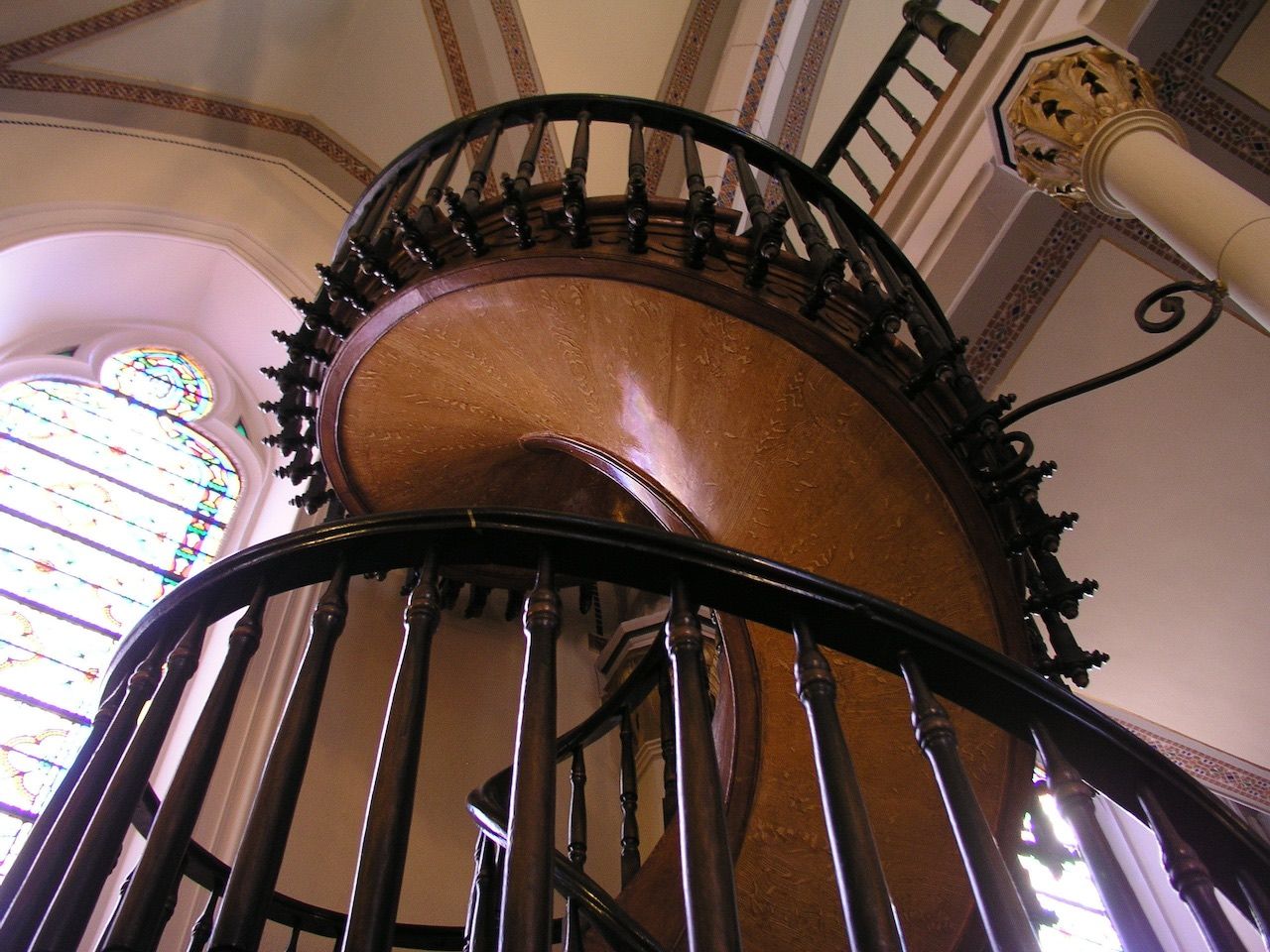 No longer used as a Roman Catholic church, the Loretto Chapel is a monument to a strange-but-true story: the creation of its baffling 19th-century staircase. It looks to be freely descending from the rafters of the main chapel (without any support beams or structures standard for staircases built in the era), and it’s now been a source of wonder for over 200 years. Somehow, people still aren’t too sure how it was built.

Books and movies have attempted to account for the mystery, but no consensus has been reached. The violent and untimely death of the original architect certainly didn’t help curtail the legend, and the lore surrounding the staircase settles on it as a simple, physics-defying miracle. An act of angels or an ingenious artist? The official story from the chapel gives equal weight to both sides. Much like Mona Lisa’s smile, the staircase is a reminder that the most memorable pieces of art carry an air of mystery.

If future generations study art the way we do, it’s strange to think that the Derrick Floor Sculptures might be among the artifacts unearthed by future archeologists. What would humans thousands of years from now think of sculptures of larger-than-life…oil well workers?

Vic Payne’s bronze statues commemorate the men and women of the oil and natural gas industry. His realist depiction of an oil rig towers 34 feet above Main Street in the little town of Artesia, making a statement that’s up to your interpretation. Politics aside, the history of the men and women who continue to accept tough and dangerous work to, quite literally, fuel the rest of the country is a very human tale that’s unarguably central to our culture.

And as Yoko Ono once said, “Controversy is part of the nature of art and creativity.”

The final, mind-blowing stop on an artsy tour of New Mexico is in an “unknown location.” Intrigued? Part natural wonder, part human creation, the exact location of the Lightning Field is a secret (well, Google knows) — you’ll have to land a coveted spot on the list and be bused from Quemado to the “undisclosed destination” to spend the night.

When you stay in the one-and-only cabin, you’ll be surrounded by 400 stainless steel poles constructed to attract and disperse the electricity from the heat lightning rolling overhead. The result is a man-made grid system that showcases nature’s awesome, unpredictable patterns. It’s unreal.

As a conceptual piece designed by Walter De Maria and completed in 1977, the Lightning Field accepts only six visitors to the cabin at a time. This is immersive art at its best — leaving anyone who sees it feeling closer to the world and to one another…and in awe of the boundlessness of artistic expression.