Airplane food has a pretty terrible reputation. The idea of an inflight meal can conjure that scene from Airplane when everyone gets food poisoning from the fish. Though airplane food has since made great strides in both quality and variety, it’s still pricey, and it struggles to shake that hermetically sealed, preservative-laden notoriety.

Bringing your own food is a cheaper, tastier, and in some ways a more convenient solution. It’s also a great way to make your flight snacking more sustainable by avoiding wasteful plastic trays and cutlery that often accompany inflight meals. Grace Woinicz, a chef and small restaurant owner, recommends “avoiding packed products, and replacing them by carrying home made products. You can wrap homemade products in aluminum foil and keep them in your hand carry or keep them in a washable food storage container.”

Before you make any hasty decisions, there are a few key considerations to be made. Chef Devan Cameron, a home-cooking expert at Braised & Deglazed, tells us how important it is to keep storage in mind so your food — whatever it might be — doesn’t spoil.

“Most foods should not be left out of the fridge for more than two hours,” he says. “You’ll likely need an ice pack or cooler bag to prevent your food from spoiling before your flight. Dehydrated foods can also be a good idea because they won’t need to be kept cool. If you go the cooler bag route, make sure to store wet foods separately from dry foods. For example, salads should be stored separately from their dressing or they’ll become soggy.”

The only question left is what to bring (and to make sure it can actually make it through airport security). We talked to professional chefs for expert insight on their favorite foods and drinks to pack for a flight. 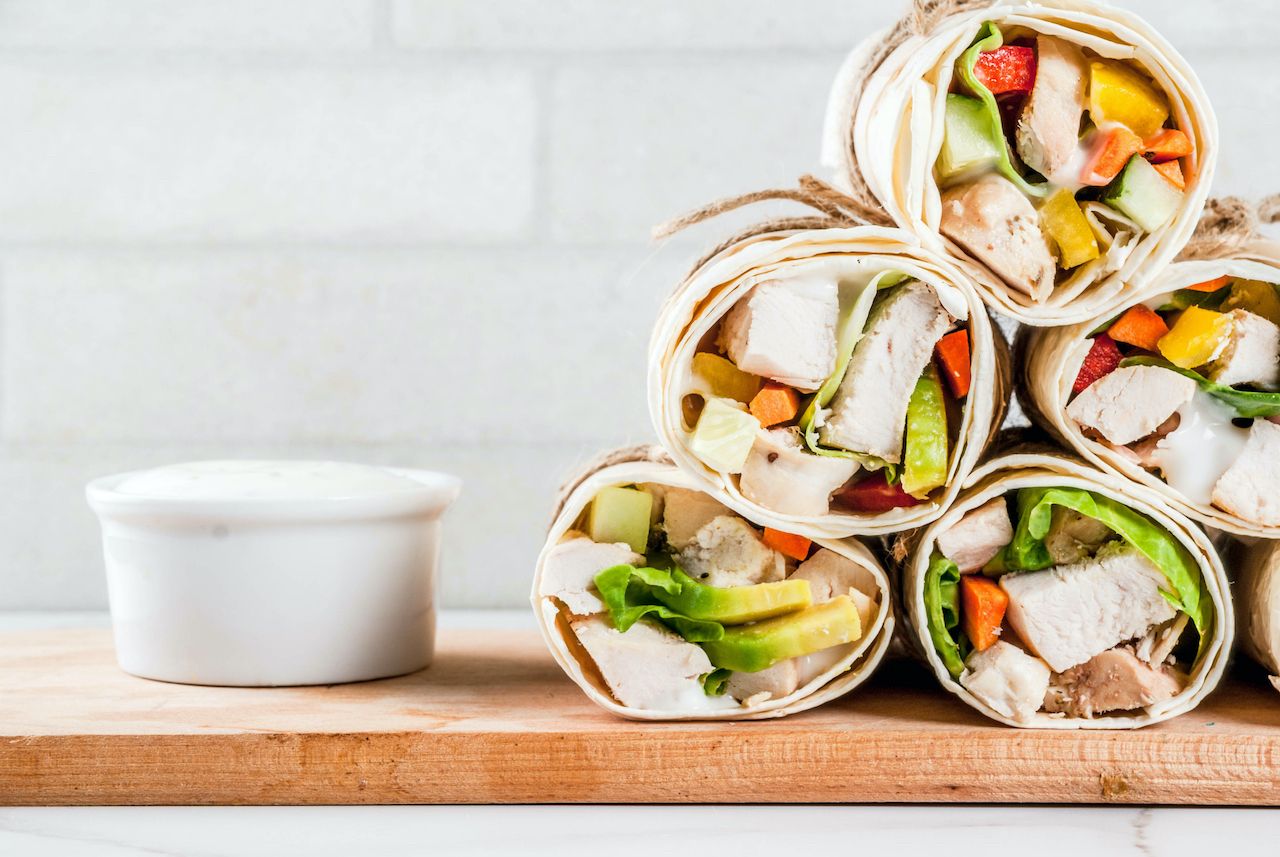 One of Woinicz’s favorites is something you can find all over the airport — and likely on many airplane menus. But nothing beats the freshness and cost-effectiveness of simply making it in your own kitchen and bringing it along.

“Homemade chicken wraps offer a smart option for your flight meals,” she says. “Preparing and wrapping a chicken sandwich at home is quite budget-friendly and very convenient to carry. You can easily keep it during long flights and eat halfway through. You can even ask the flight attendants to heat them for you in the convection oven if you prefer it warm.”

Homemade meals don’t have to be complex to be satisfying, convenient, and delicious. Woinicz, for example, chooses a simple classic for a great inflight meal.

“Hummus and crackers are one of the cheapest meal options that are easy to carry and prepare during flight,” she says. And contrary to popular belief, not all hummus comes in a plastic container.

“Pack some hummus powder along with crackers in a bowl,” Woinicz says. “Whenever you feel hungry, ask the flight attendant to provide you with some hot water. Pour in hot water, and your meal is ready to eat. This is one of my most commonly carried meals during flights because of how budget-friendly and convenient it is.” 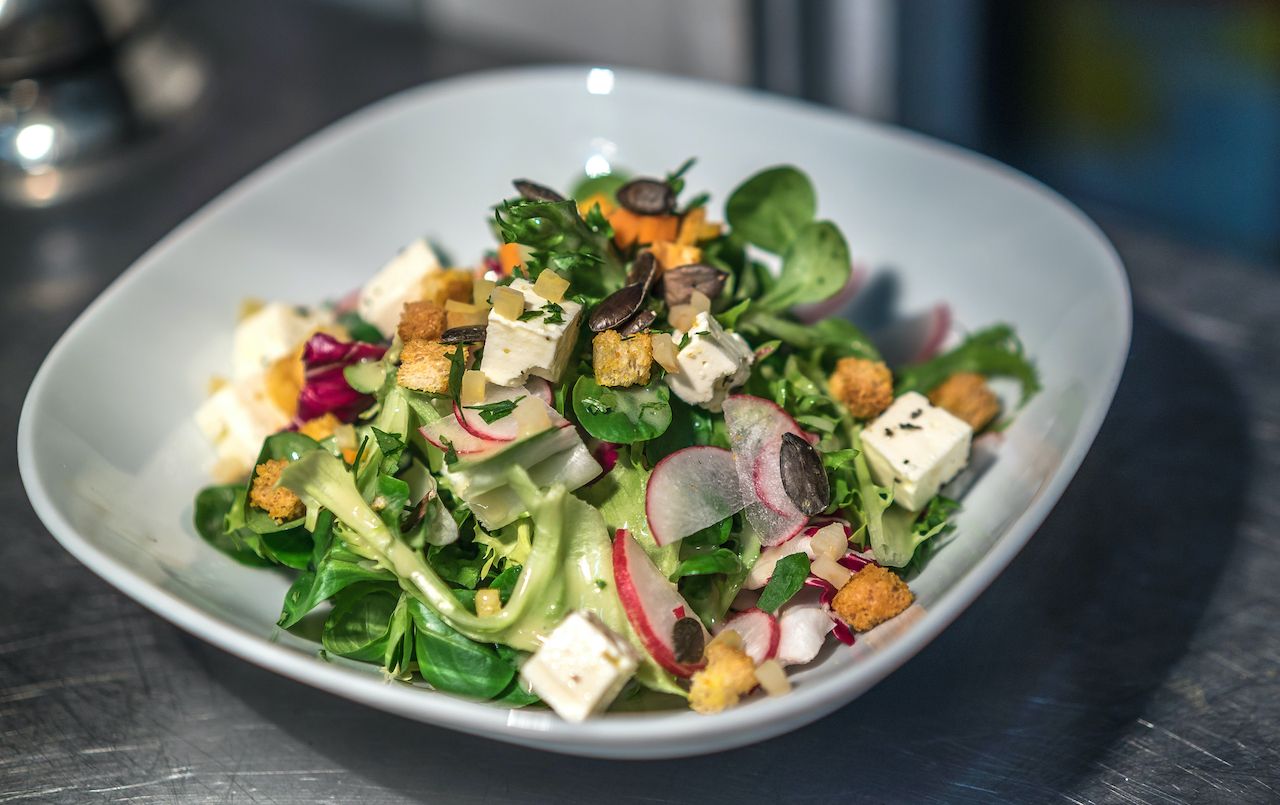 It might not sound sexy, but it gets the job done. Salads are not only a healthy option, they’re also a safe snack for travelers looking to avoid stomach distress caused by the greasier foods often served in airports.

Woinicz prefers to eat as healthy as possible during her flight to avoid health issues while traveling. “I always carry a homemade salad made out of spinach, lettuce, corn, capsicum, chicken, and a few sauces on it,” she says. “Salad is easy to carry in disposable containers and the airport security has never had a problem with it.”

Vegetables from home are always fresher and tastier than the stingy side-portions you get on an inflight meal. Vicky Cano, chef and recipe developer at Mealfan.com, chooses vegetables for their versatility.

“Vegetables are multipurpose foods serving as healthy solo snacks and, on top of that, they can be used in other foods as additives,” she says. “Fresh vegetables are a better alternative to the oily and greasy foods often served on flights. So in order to keep your health in check, always carry a ziplock bag with you containing freshly cut veggies whenever you are preparing to travel on an airplane.” 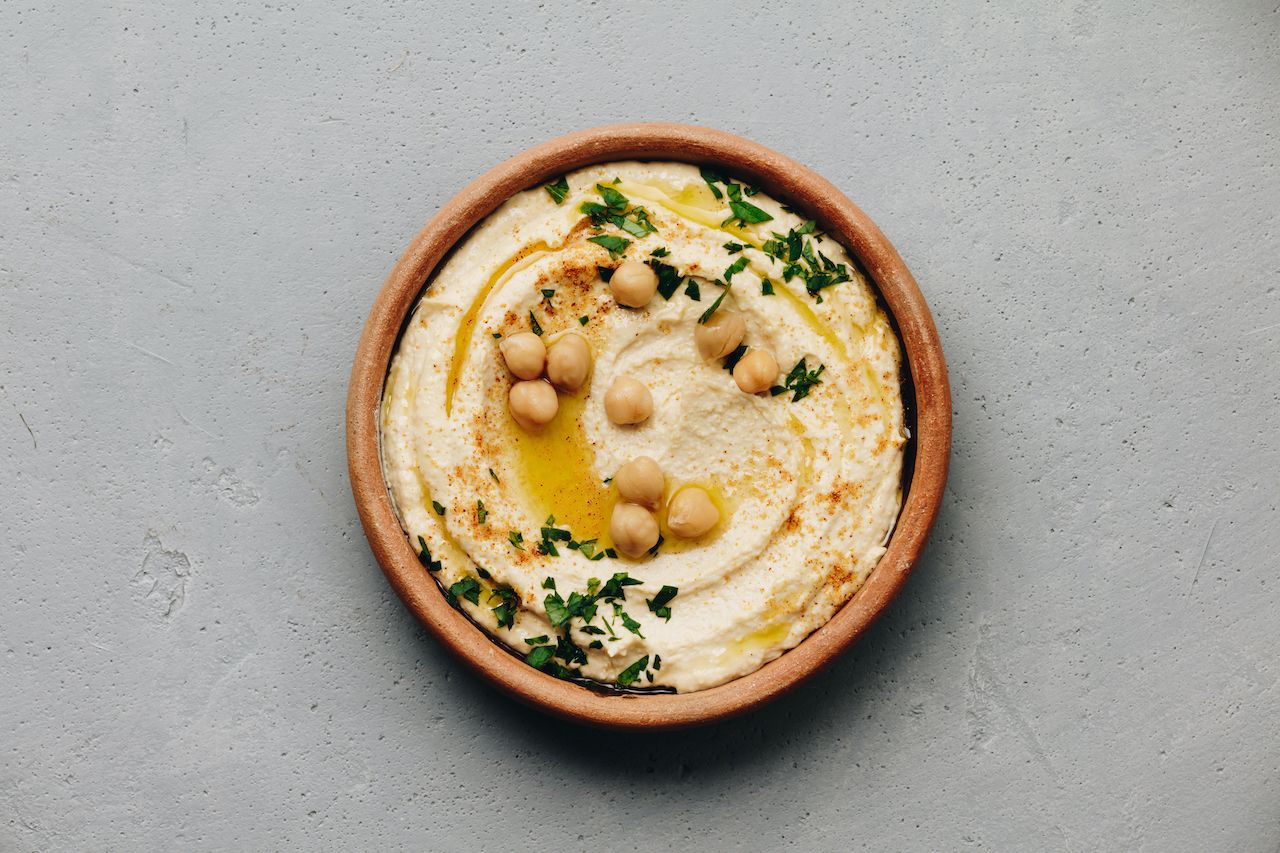 While the powdered stuff does the trick, you can also make the real stuff at home and bring it with you. Katerina Coumbaros is from Greece and owns three restaurants in Orlando, Florida. She often flies back and forth from the US to Greece with her children, so clean and efficient plane snacking is a necessity. She leans heavily on hummus for her inflight meals, and she gets creative with its use.

“House-made hummus never fails in an airtight container with pita chips,” she says. “You can also use that hummus to make stuffed pita sandwiches. We use sliced chicken, bell peppers, hummus and sautéed onions. We typically avoid raw greens because they get soggy over time.”

Alright, enough clean, responsible dining. It’s time for the fun stuff. Pizza isn’t just everyone’s favorite food, it’s also one of the best foods to bring on a plane. And no, we’re not talking about ordering a large pepperoni pie at the airport and trying to eat it with the box squeezed onto your lap. Pizza is perfect: It’s delicious, portable, TSA won’t take it, and it’s appealing no matter what temperature it’s at when you’re ready to eat it (as anyone who has enjoyed second-day pizza can attest). Like most other plane meals, the best pizza snack is one you make at home and pack in an airtight container.

“Head to your local store,” Coumbaros says, “get a premade flour crust, top it with your favorite sauce, cheese, and proteins and cut them into squares to easily snack on.”