I had a fairly unusual (and very fortunate) childhood traveling in our RV, and trust me — there ain’t nothin’ like it. Every summer, my parents would pack up my brothers and me, and we’d spend weeks or even months driving across America. Often, we’d be traveling for a specific purpose, but so many other times we’d go just to drive.

When you spend your whole childhood taking these sorts of trips, eventually you have to think outside the typical Mt. Rushmore/Grand Canyon/Yellowstone sorts of itineraries. If you’ve already seen the major sights and are looking for a little destination inspiration, give these a try.

The serene: Lake of the Ozarks, Missouri

This narrow, serpentine lake sprawls over 54,000 acres of central Missouri and has more coastline than California. There are the typical water activities you’d expect: swimming, boating, beach lounging…and partying in “Party Cove.” But there’s also a ton more to see and do in this state park (park-s, actually — the lake is so massive there are several of them). Given its size, it’s hard to narrow down the experience, but here are some highlights:

The Table Rock Lake area has a number of RV parks right on the water, with fantastic views and great access to all the above. This is also a great jumping-off point for the nearby small city of Branson, where you’ll find, among other activities, a 19th-century-themed amusement park, luxurious old-timey riverboat cruises, and Dolly Parton rodeo-themed dinner theatre.

The Big Apple might not seem like the most logical destination for your RV vacation. Who wants to drive in that city, let alone try to parallel park your RV in Midtown? But just across the Hudson from Manhattan and right next to the Liberty Harbor Marina sits the Liberty Harbor RV Park, which offers super-convenient access to the city — at a fraction of what you’d pay for most area hotel rooms.

The park itself is fairly barebones (there are no sewer hookups, for example), but that’s not why you’re staying here. You’re here to enjoy everything the New York metropolis has to offer — you’re a short walk to the ferries and PATH trains that will take you right into the city. Not only that, but between the amazing views at Liberty Harbor Park to the shops and historical landmarks of Jersey City, there’s a lot to do within walking distance of where you’re parked.

Imagine stepping out of your vehicle directly onto beach sand and walking just a few steps to the water. Camp Gulf, located in northwestern Florida on the Gulf of Mexico, allows you to do just that with a number of RV sites located as close to the water as you can possibly get. Fall asleep to the sound of the ocean and wake up and walk right to it, going from bed to waves in a matter of seconds. (Note: Pets aren’t allowed at the beachfront sites.)

If sleeping on the waterfront sounds like your kind of vacation, Florida isn’t the only option. From York Harbor, ME, to the Oregon Coast, you’ve got plenty of options for bodies of water to dip your toes into. But Camp Gulf sure is a good, easy-access starting point.

The rugged: Twin Peaks tour of the Pacific Northwest 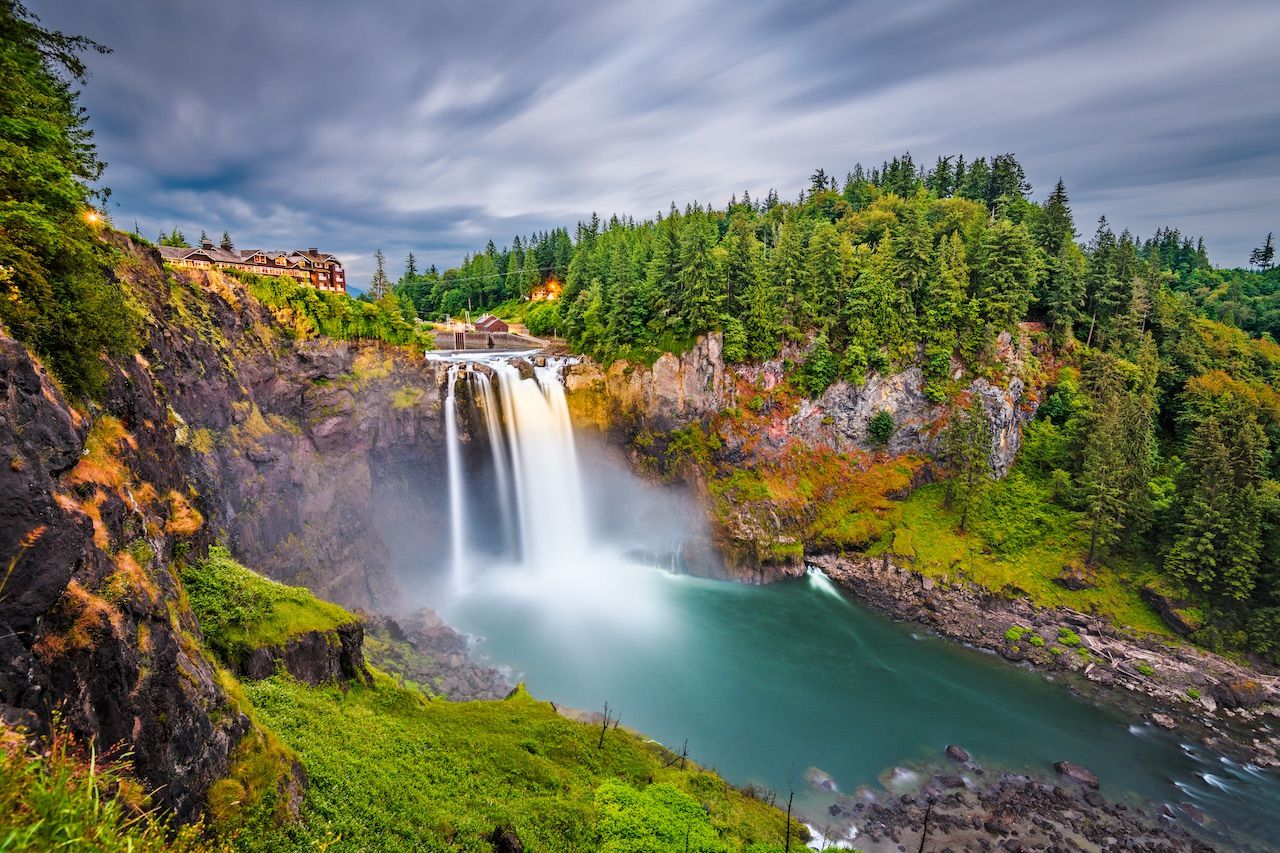 Even if you’re not a huge Twin Peaks fan, some of the show’s sites (like the view from atop Snoqualmie Falls, for starters) are absolutely worth checking out. If you are a Twin Peaks devotee, many of its most iconic landmarks are easy to find.

There are a few RV parks in the area, but the Blue Sky RV Park is probably your best bet for setting up a home base. Tucked away in the woods at the base of Tiger Mountain, it’s a 15-minute drive to the Salish Lodge and Spa, which you’ll know better as the Great Northern Hotel. That’s where you’ll find those views of the falls from the show’s opening titles. If you want a night or two out of your RV, their rooms are a luxurious indulgence, but don’t pass up a quick stop for a meal or a drink. Make sure to ask for a table by the window, or else check out the more casual “attic” space. If you want to finish off that meal with some cherry pie and damn good coffee, you’re less than five miles from the Double R Diner (it’s real-life name is Twede’s).

We’re not done! A few miles north, you’ll find the Roadhouse, or Bang Bang Bar. The high school used for filming in the show is also nearby (it’s called Mount Si). And the “Welcome to Twin Peaks” sign is on your way into town, though if you want to stop at the site where it should be (41433 SE Reinig Road), the view is still impressive enough to justify a photo op.

Beyond pop culture, the Cascade Loop is one of the best drives in America. It starts 25 miles north of Seattle and includes about a million possible stops: Mt. Rainier, North Cascades National Park, Lake Chelan, Leavenworth, the Stevens Pass Greenway…the list goes on. Give this entire shebang five days at the very least, and don’t forget your camera’s battery charger.

Deep in the desert of rural West Texas might not be where you’d expect to encounter a major hub of contemporary American art and culture, but that’s what you’ll find in Marfa. The city’s own website describes it as, “Tough to get to. Tougher to explain.” Accurate on both counts. Luckily, traveling by RV will cut down on the laborious ordeal of trying to fly into Marfa (the nearest major airports are both 200 miles away).

The town has served as a rustic retreat for artists of all mediums looking for some inspiration and isolation. It’s also a major destination for prominent minimalist art. Starting in the 1970s, New York artist Donald Judd began transforming Marfa. He bought two giant hangars and a number of other buildings (he even acquired a former military base) and turned them into art spaces. Today, the town has museums, galleries, and large-scale art installations scattered throughout its entirety. If you visit, absolutely do not miss the Judd Foundation tours. Their offices happen to be only a mile from the Tumble In RV Park, just east of town.

Check the events schedule before you go, as there are festivals you’ll probably want to experience. Most notably: the annual Marfa Myths music and multimedia festival, and the Marfa Lights Festival, named after the mysterious orbs of light that occasionally appear outside of town. Which brings us to…

The bizarre: A UFO tour through the American Southwest 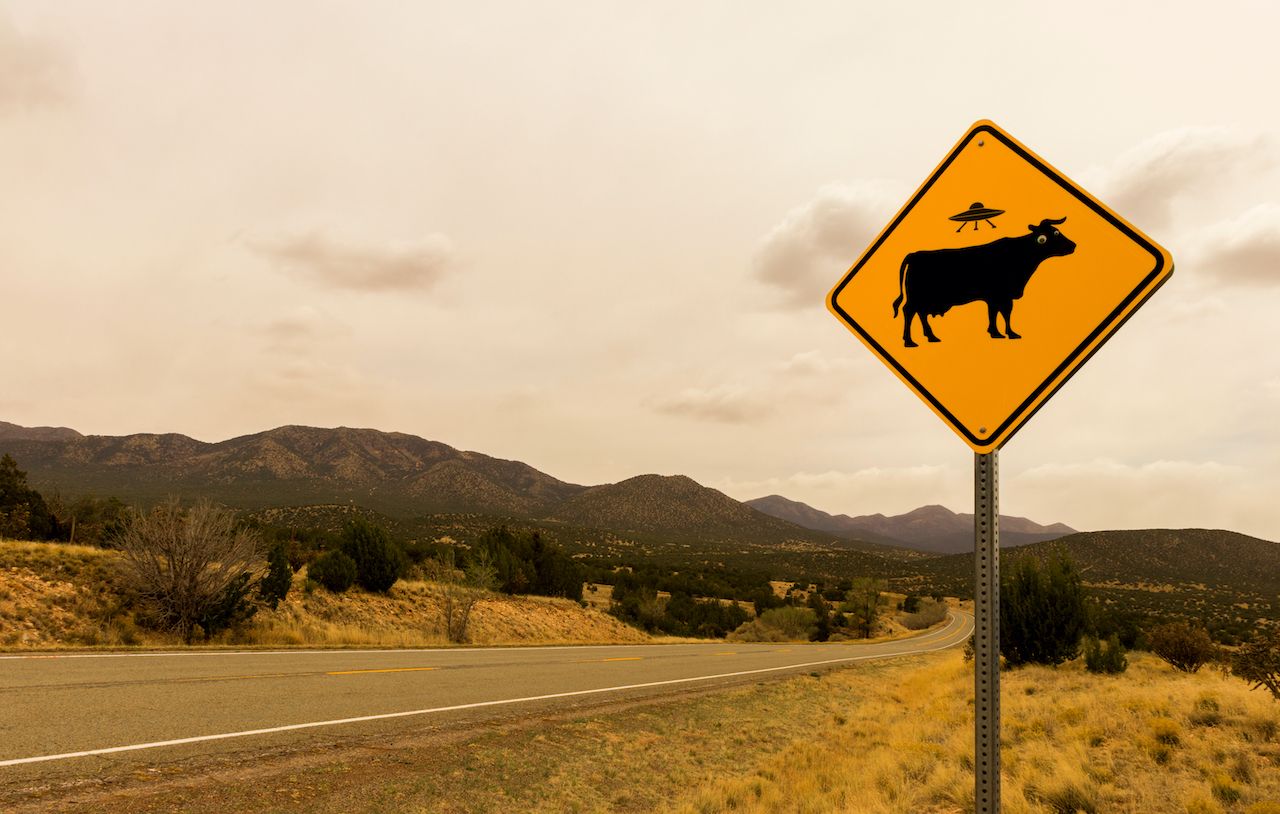 When it comes to iconic road trip destinations, Roswell, New Mexico, has to be near the top of the list. I first stopped here on one of my family’s cross-country trips when I was about 12, so the campy International UFO Museum & Research Center, with its displays of the sort of aliens you’d expect to see in a 1960s sci-fi movie, was right up my alley.

But Roswell isn’t the only extraterrestrial hotspot in the American Southwest, especially if you’re eager to cover some major ground. I’d recommend starting in Aurora, Texas, the site of one of the earliest recorded UFO sightings in the US. In 1897, after a number of reported glimpses, a “cigar-shaped” spacecraft crashed into a local windmill…or so the story goes. The pilot of the craft was said to have been “not of this world” and was buried in the Aurora Cemetery, where you can visit the apparent alien’s unmarked grave and decide for yourself. Check out Lee’s Country Campground in nearby Rhome if you’re staying the night.

From Aurora to Roswell is about a seven-hour drive, and from there you can continue west to Sedona, Arizona. The town is full of UFO tours, many of which are “guaranteed” with money-back offers, and reviewers claim to have witnessed sometimes dozens of sightings in a single evening via military-grade night-vision goggles. Sedona is also reputedly a vortex energy hot spot. Many people, even skeptics, describe feeling calm, energized, or balanced, depending on the specific vortex (they say there are at least four in the area).

Finally, if you have one last stop in you, you can’t do a UFO tour without getting the RV near the famous Area 51, located about 80 miles northwest of Las Vegas, Nevada. Note that you can’t actually visit the military base, rumored to be the site of alien experiments and the reverse engineering of alien spacecrafts. However, the incredibly small town (as in a population of about 50) of Rachel, Nevada is worth a trip of its own. The Little A’Le’Inn restaurant and inn has all your kitschy memorabilia needs covered, along with UFO tours and plenty of locals willing to share their stories. It’s got about a million fewer people than Yellowstone, and way more aliens. At least, probably. You won’t know until you go.

This post is proudly produced in partnership with Go RVing.
Tagged
Road Trips Travel Insider Guides United States Go RVing: Wherever You Go
What did you think of this story?
Meh
Good
Awesome
✖
travelstoke
Download the mobile app
stoked by