THE MANY SPECTACULAR colleges that form the University of Oxford in England and the stunning architecture of Trinity College in Dublin, Ireland, might be some of the most famous rivals to the gorgeous campuses found in the United States, but they’re not the only eye-catching ones to be found in Europe. Places of learning located in picturesque natural settings or in ornate buildings reminiscent of Harry Potter’s Hogwarts are rife on the Old Continent and are very much worth a detour for visitors in the area — and they should give prospective international students plenty to think about. From Scotland’s Glasgow University to Krakow’s Jagiellonian University, here are some of the most beautiful universities in Europe. 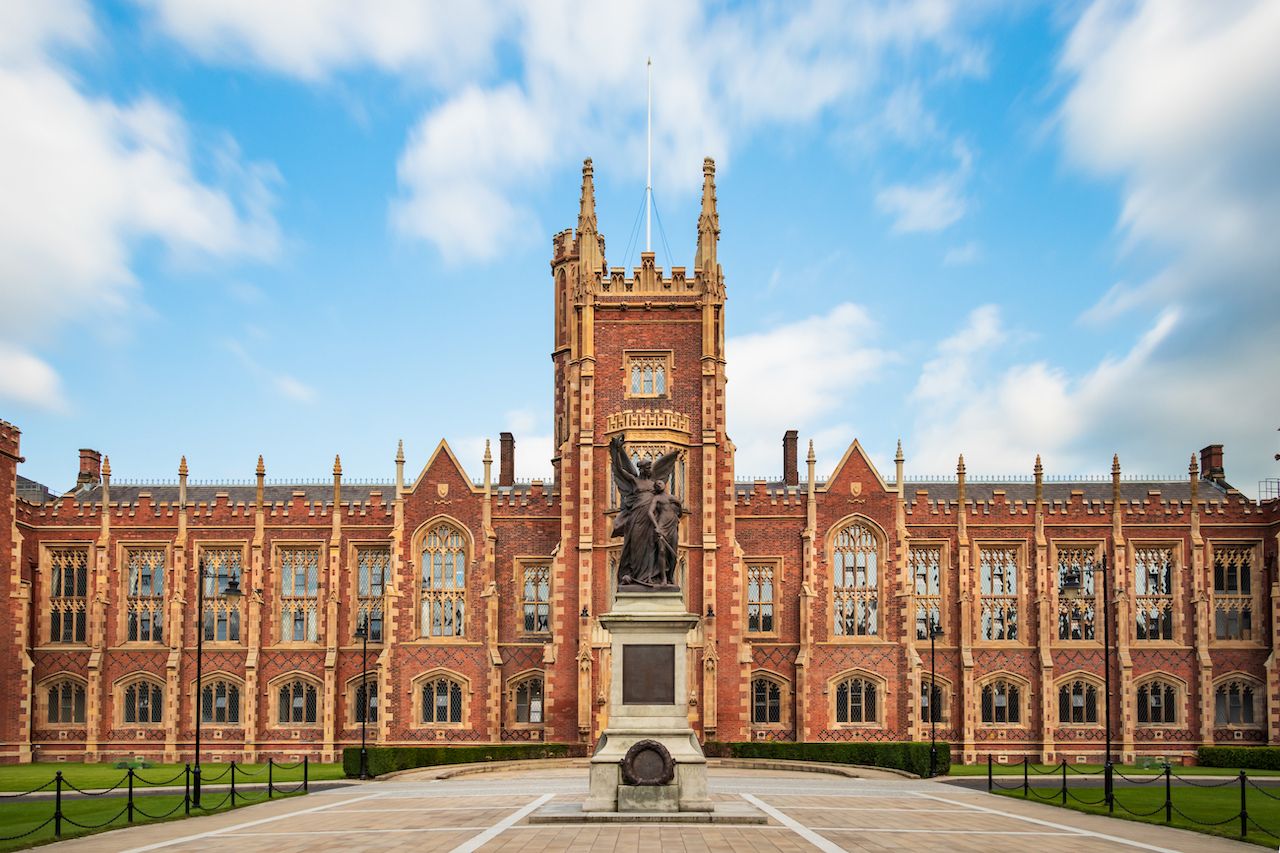 Belfast is often unfairly described as dreary, but everyone agrees that Queen’s University’s main building, arguably the city’s most majestic piece of architecture, is nothing but uplifting. Designed by Sir Charles Lanyon, the English architect also responsible for Belfast’s famous Customs House, the main building is also known as the “Lanyon Building” for obvious reasons. Built in a Gothic revival style, the 1849 red-brick Lanyon Building instills a great sense of pride in all the staff and students with its towers, spires, and gargoyles, as well as its grassy quad. The fact that the building is just a two-minute walk from Belfast’s Botanic Gardens only adds to the university’s Victorian elegance and the campus’ beauty. But the Lanyon Building is not the only stunning structure on campus — Queen’s University is comprised of 300 buildings, many of which are impressively beautiful, such as the magnificent Riddel Hall; the modern and colorful computer science building; and the opulent graduate school.

2. The University of Lund, Sweden 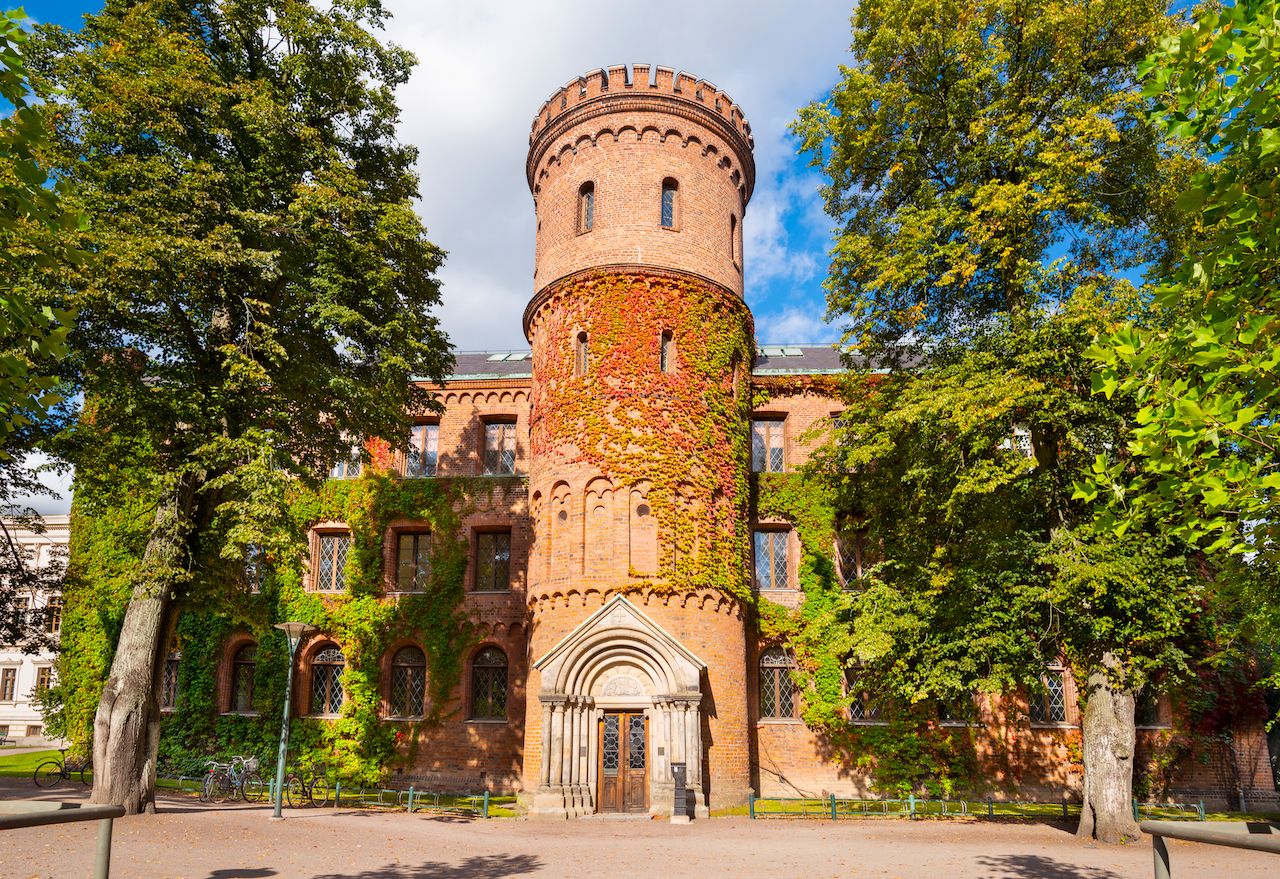 Overshadowed by Stockholm, Lund is not very well-known to those living outside Sweden, and it’s a crying shame. Colorful and filled with old-timey charm, the city packs a punch, especially when it comes to its university campus. The University of Lund ticks all the boxes to be featured in a storybook: An ivy-clad red-brick library; a former king’s house dating from 1584 complete with a crenelated tower; an 1882 main building with a fountain upfront; and a 12th-century cathedral, among other amazing structures. Everywhere you look is a dazzling piece of architecture that students and staff get to enjoy daily and that visitors can easily visit. Not only is it beautiful, but beyond the lavish buildings, the teaching, learning, and research that have been going on for 350 years are top-notch — Lund University is ranked among the world’s best 100 universities.

3. The University of Coimbra, Portugal 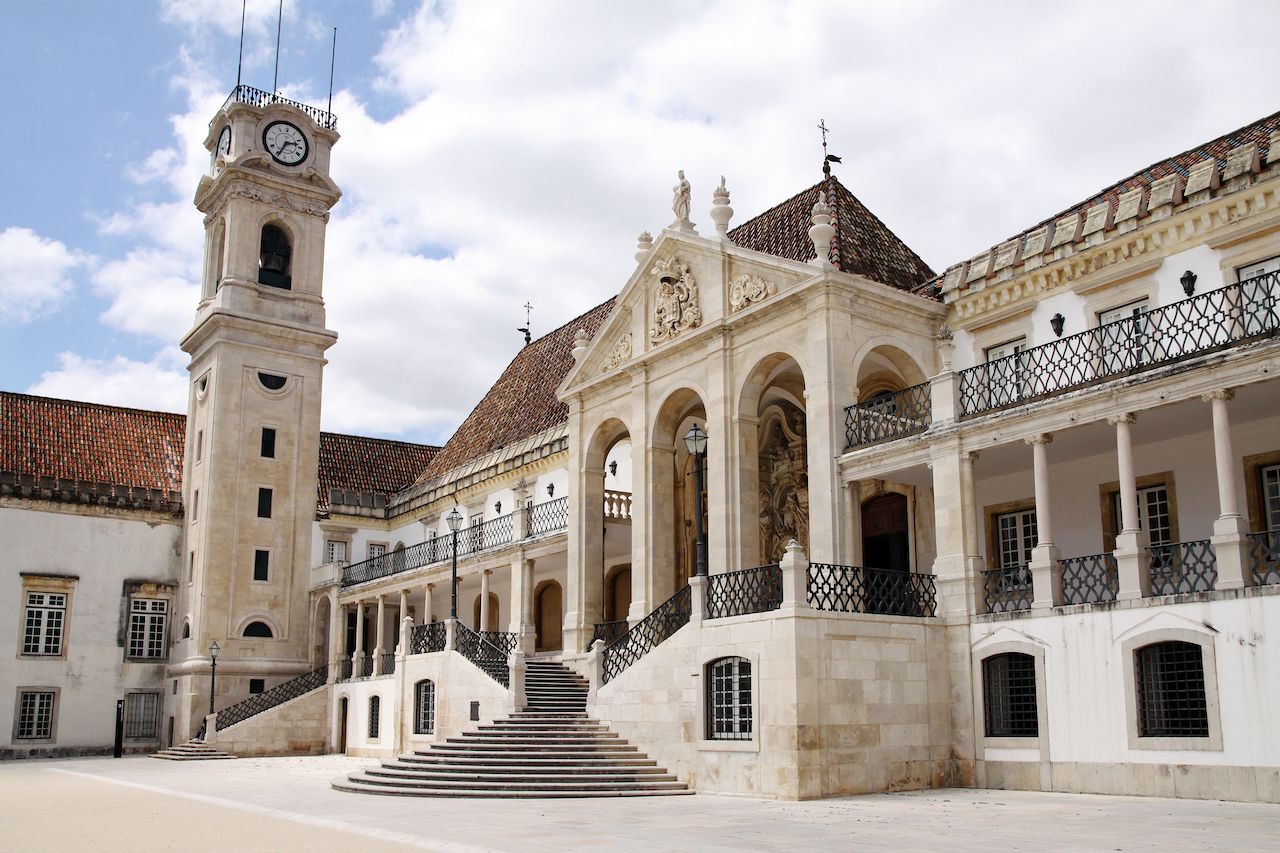 Listed as a UNESCO World Heritage Site in 2013, the University of Coimbra is divided into two outstanding abutting campuses: Alta, with 21 buildings, and Sofia, with 10 buildings. Being one of the oldest universities in the world (it was established in 1290), most of the 31 structures that define it are historically significant and incredibly ornate. The most famous of them is the University Palace and its courtyard on the Alta campus, which are often praised as the heart of the University of Coimbra. Because it’s located on a hill, the views from the courtyard are impressive, but for an even better vista, get some elevation in the adjacent university clock tower. The botanical garden, the Royal College of Art, the College of Saint Jerónimos, among many other university buildings, are all worth a good look, but the one place on campus that cannot be missed is the magnificent and richly decorated Baroque Joanine Library.

4. The Jagiellonian University in Krakow, Poland 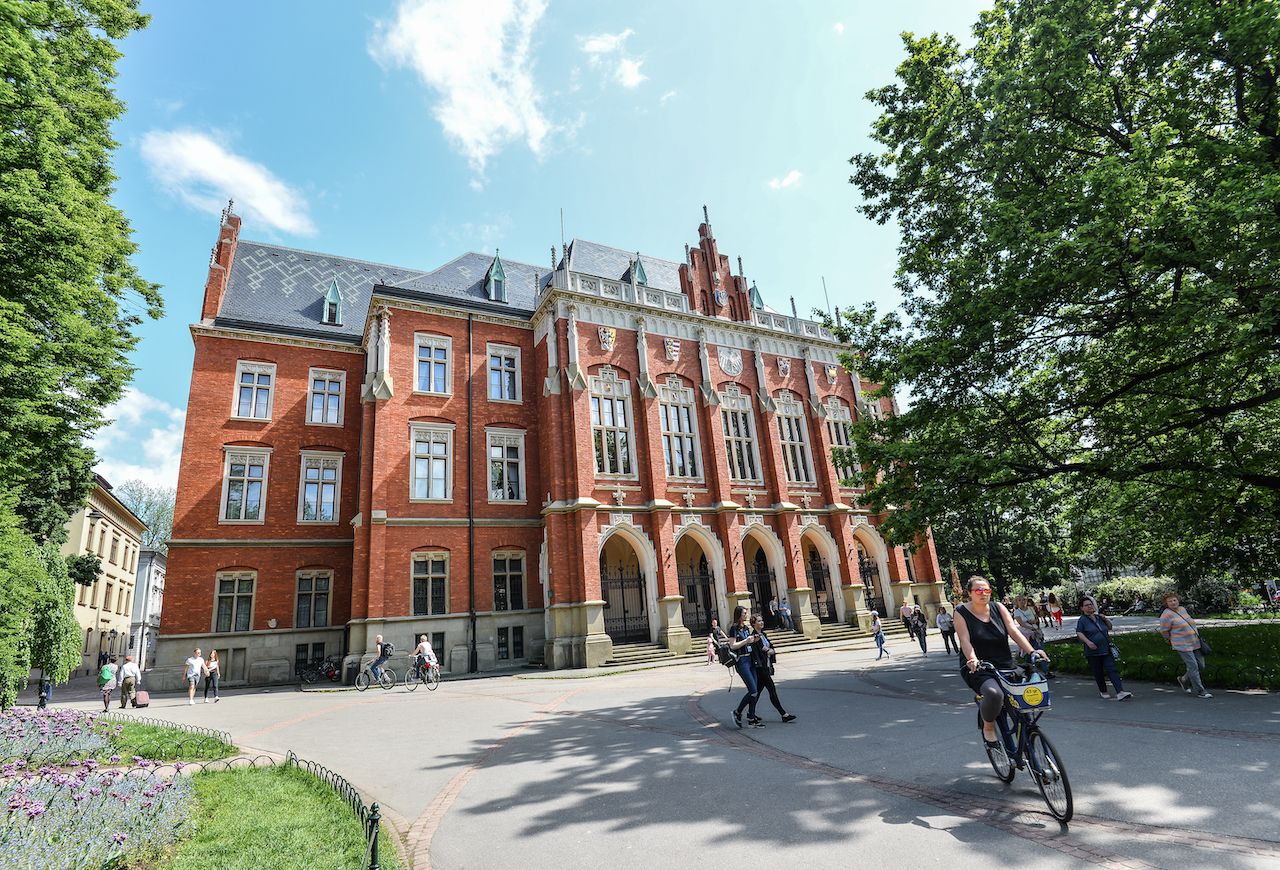 The most lauded building at the Jagiellonian University in Krakow is Collegium Maius, the oldest university building in Poland. Dating back to the 15th century, when King Władysław Jagiełło donated it to the university, Collegium Maius has been converted into a university museum since after WWII, but its architecture has remained just as beautiful. The new-Gothic facade is very impressive, but it’s the inner courtyard with its pointed arches and outside balcony that make this building so special. Visitors can easily tour the building and the museum and get an eyeful of this grand historical university building. There are other structures making up the Jagiellonian University in Krakow that are also worth checking out, such as the Faculty of Biology’s amazing botanical gardens’ greenhouse located just 25 minutes from Collegium Maius on foot. 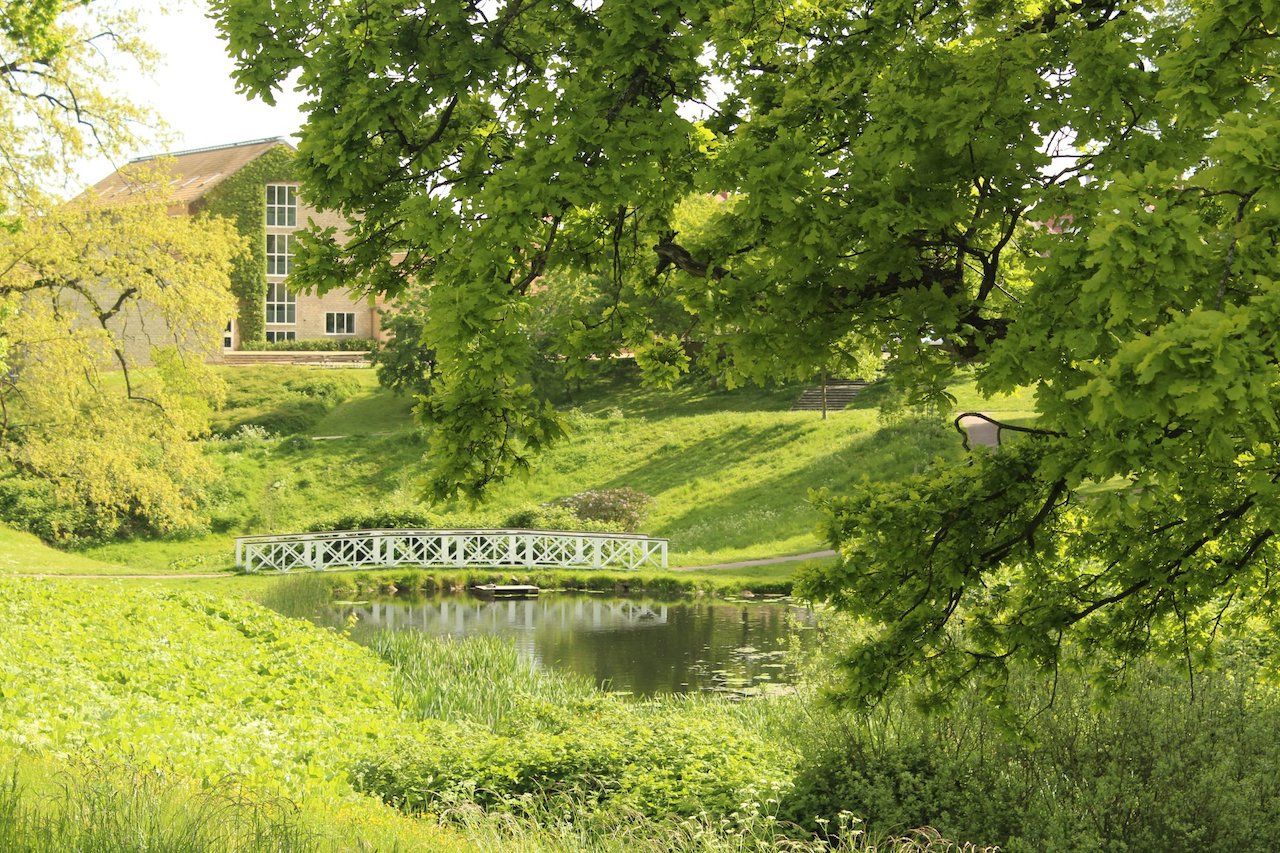 On the campus of Aarhus University, the architecture is fine, but the real showstopper is the natural setting. Trees, vast expanses of lawns, ponds, ivy-covered buildings, and bucolic bridges make the University Park one of the greenest and most peaceful campuses out there. It’s the perfect place for stressed-out students as they can walk the lush park, observe the many birds that call it home, and even sit on the step of the grassy amphitheater to take a breather in between essays and revisions. Fall never disappoints on the Aarhus campus as the change of colors makes for a great spectacle, but even when covered in snow, the landscape is striking. And despite being a small institution (there were only 38,000 students last year) it is consistently ranked as one of the world’s top universities — maybe it has something to do with the fact that the city of Aarhus ranks second among the world’s happiest cities after Helsinki, Finland, in 2020.

6. The University of Vienna, Austria 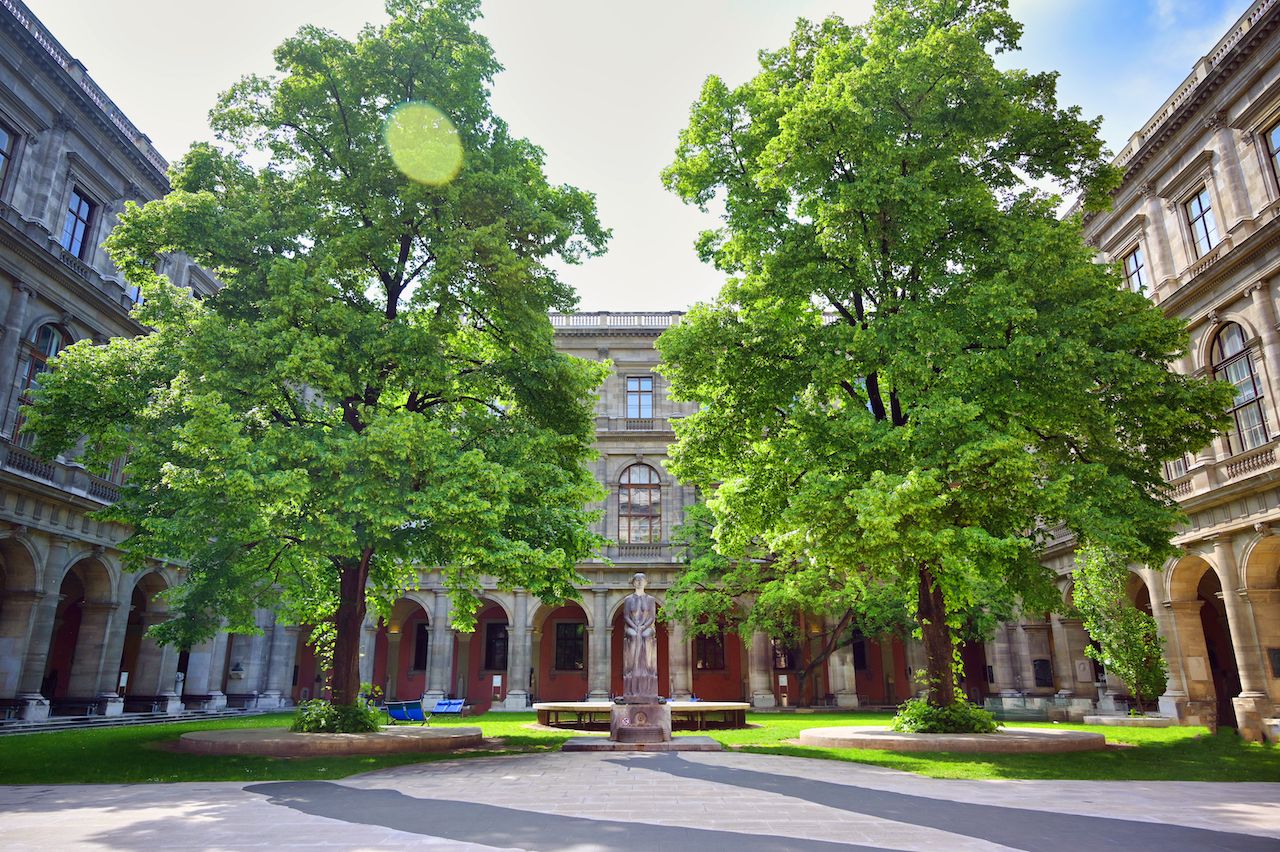 The main building of the University of Vienna, a great 19th-century creation, is located in the historical heart of the city, only an eight-minute walk to the famous Café Central, so students can easily load up on apple strudel when the cravings hit. From the Ringstraße (and from inside), the building that houses lecture halls, the main University Library, several departments, and some administrative offices is grand, but it’s what goes on in the back that’s most impressive. The Renaissance-inspired arcaded courtyard, hidden behind the main building, is a thing of beauty with a statue of Castalia (the guardian of the fountain of knowledge in Delphi in Greek mythology), trees, a large expanse of lawn, and a sitting area. It’s a wonderful place for students who need to take a break from the equally dazzling library to catch some sun rays in the spring.

7. The University of Glasgow, Scotland 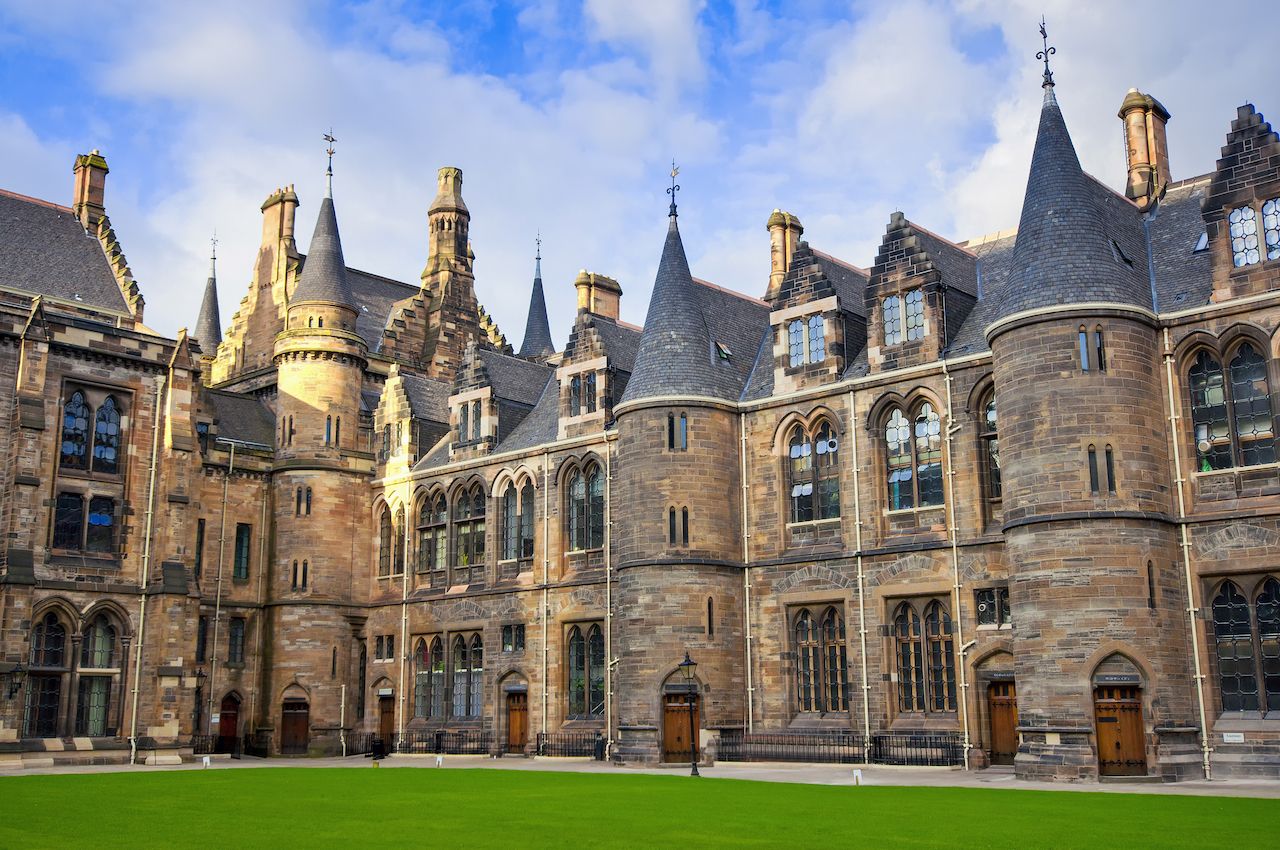 The University of Glasgow has three campuses, but the one you don’t want to miss is Gilmorehill Campus, in the West End of Glasgow. This is where the iconic main building, also known as Gilbert Scott building (named after its architect), is located. The Gilbert Scott building is a 19th-century Gothic revival structure with a 278-foot-tall bell tower that is one of Glasgow’s most famous landmarks. The turrets and the quadrangles will transport you to Hogwarts in an instant, but make sure to explore further and check out the superb Kelvingrove art gallery and museum for an extra dose of beauty, inside and out.