You’re probably familiar with Oxford, the world famous university founded nearly a thousand years ago in 1096. What makes the school truly unique, however, isn’t its age or medieval buildings; it isn’t even its reputation for academic excellence. It’s the myriad of strange traditions that stubbornly refuse to die. In contrast to the school’s stuffy and serious reputation, many of these traditions are simply silly. Others stem from a desire to preserve a sense of medieval identity. Whether you’re a student yourself or just visiting for an extended period, you can’t help but notice how the school, and the city itself, is defined by these strange traditions. 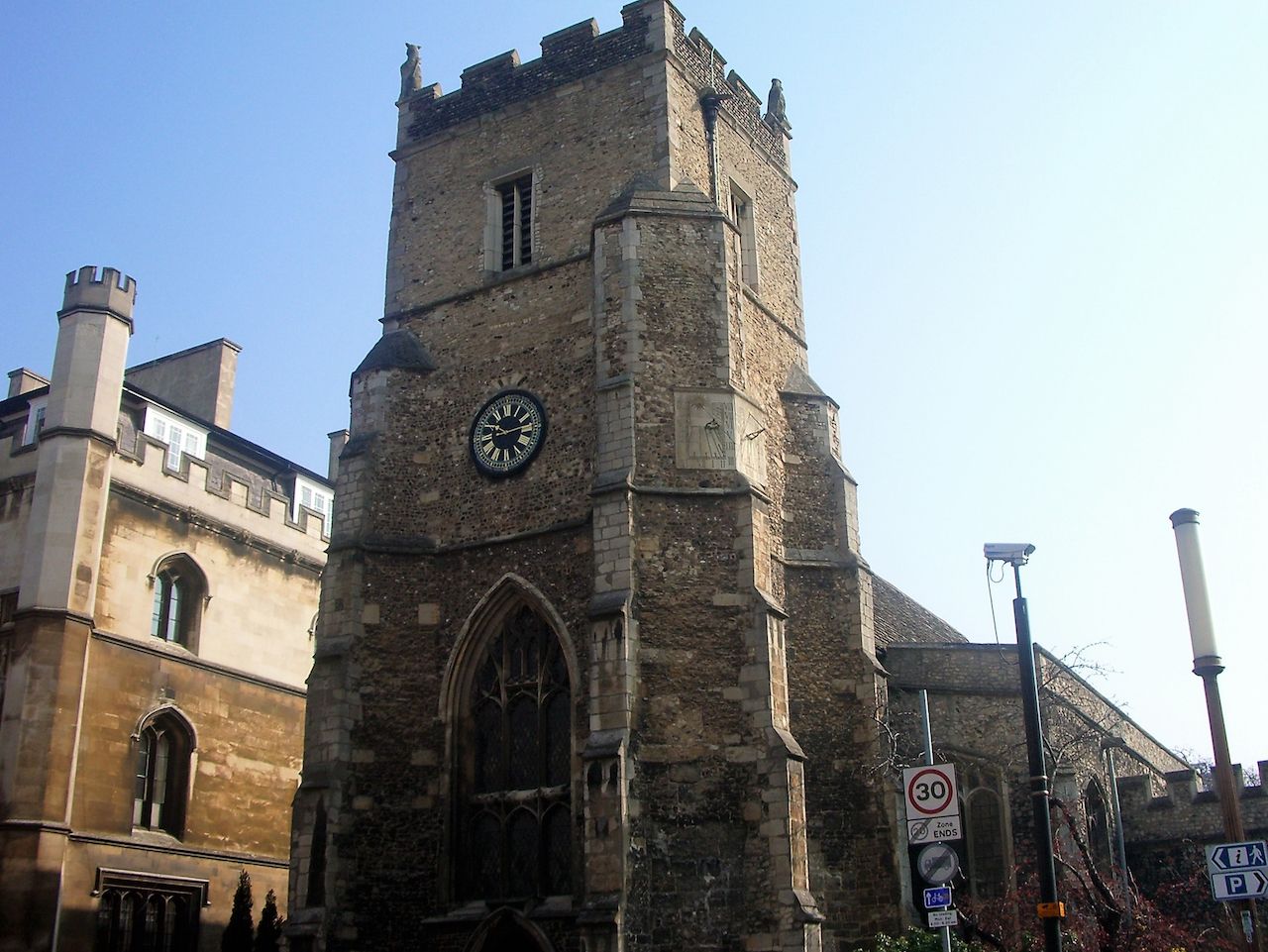 If you’re hurrying to class at Oxford and you arrive at 9:05 AM, don’t worry. You’re not late; you’re right on time. That’s because all university lectures, exams, and church services are always scheduled for five minutes past the hour. This is because before the advent of railways, the UK’s towns operated on their own slightly differing times. Oxford’s local time was five minutes and two seconds behind Greenwich Mean Time. Though Oxford was eventually forced to make its time consistent with everyone else’s, the additional five minutes is a nod to the past. 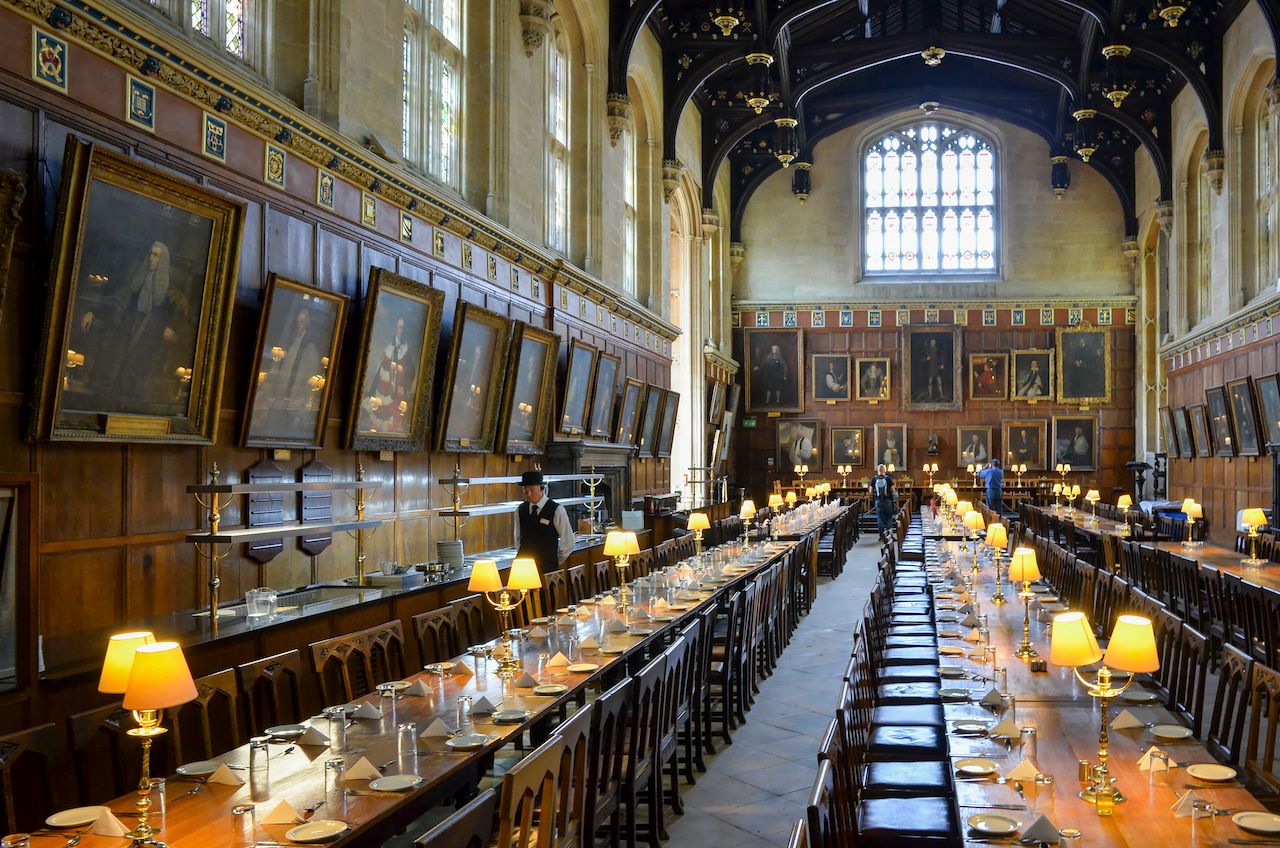 At dining halls across the United States, it’s common to see students showing up half-asleep (or completely drunk) in sweatpants and tank tops, basically using the cafeteria as an extension of their living rooms. This is not so in Oxford. Every week, colleges host a formal three-course meal called Formal Hall where students are required to wear formal Oxford attire. This ranges from a waist-length, vest-like frock coat for undergraduates to full, knee-length gowns for graduate students. And while you might think you look fashionable, fashionably late isn’t an option. Some colleges have been known to turn students away for being even a few minutes late to Formal Hall. 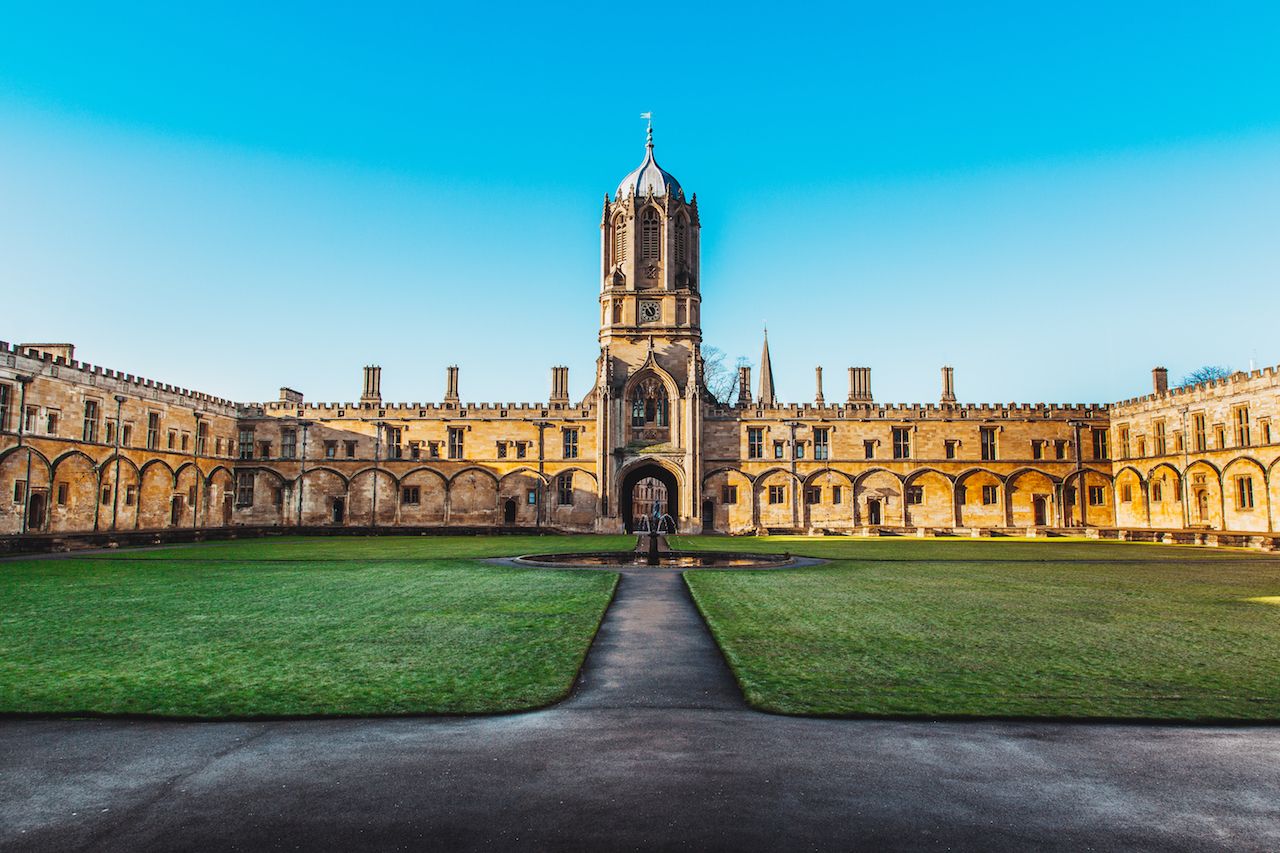 It’s a simple tradition, but it can take quite a while to get used to it. Wandering through the many colleges that comprise Oxford University, you’ll probably notice the pristine nature of the quad lawns. They’re always lush and impeccably green, and they didn’t get that way by accident. Nobody walks on the grass. It’s one of Oxford’s most widely obeyed unspoken rules. Even if it means taking a circuitous route to class, treat the lawn like lava. If you really want the thrill of stepping on that green, well-watered lawn, you’ll have to become an Oxford professor — they’re the only ones given completely free reign. 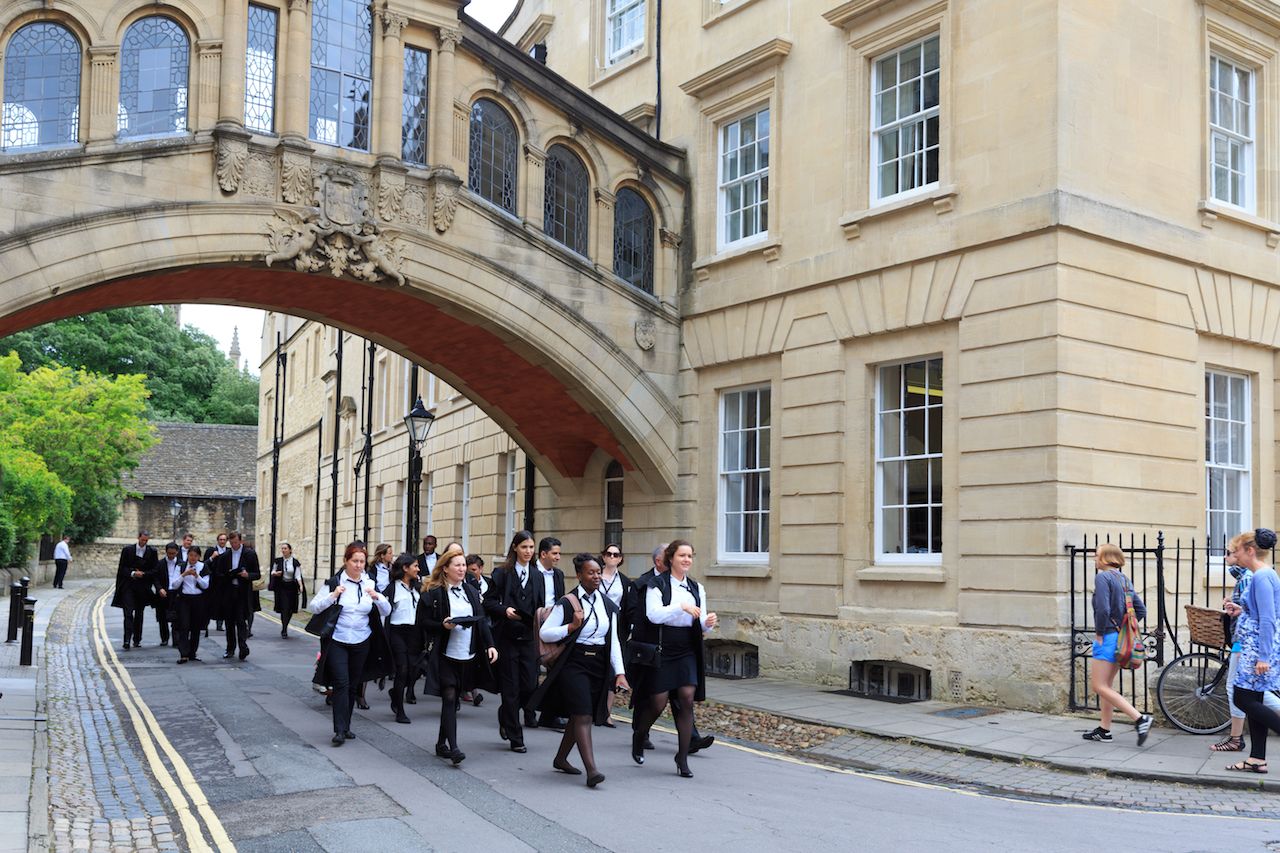 You might wish every political event was like this one. Hustings is Oxford’s version of a debate between candidates for school office, but there’s nothing politically correct about it. At hustings, it’s customary to not only ask questions about policy but also about intimate details of the candidates’ personal lives.

At one particular hustings at St. Edmund Hall, I was lucky enough to hear the answers to the following questions: “If you could perform one sexual act for your opponent, what would it be?”, “I’ve heard you’re a big Star Wars fan — please do your best Jabba the Hutt impression,” and “If I promise you my vote, will you write next week’s history tutorial essay for me?” 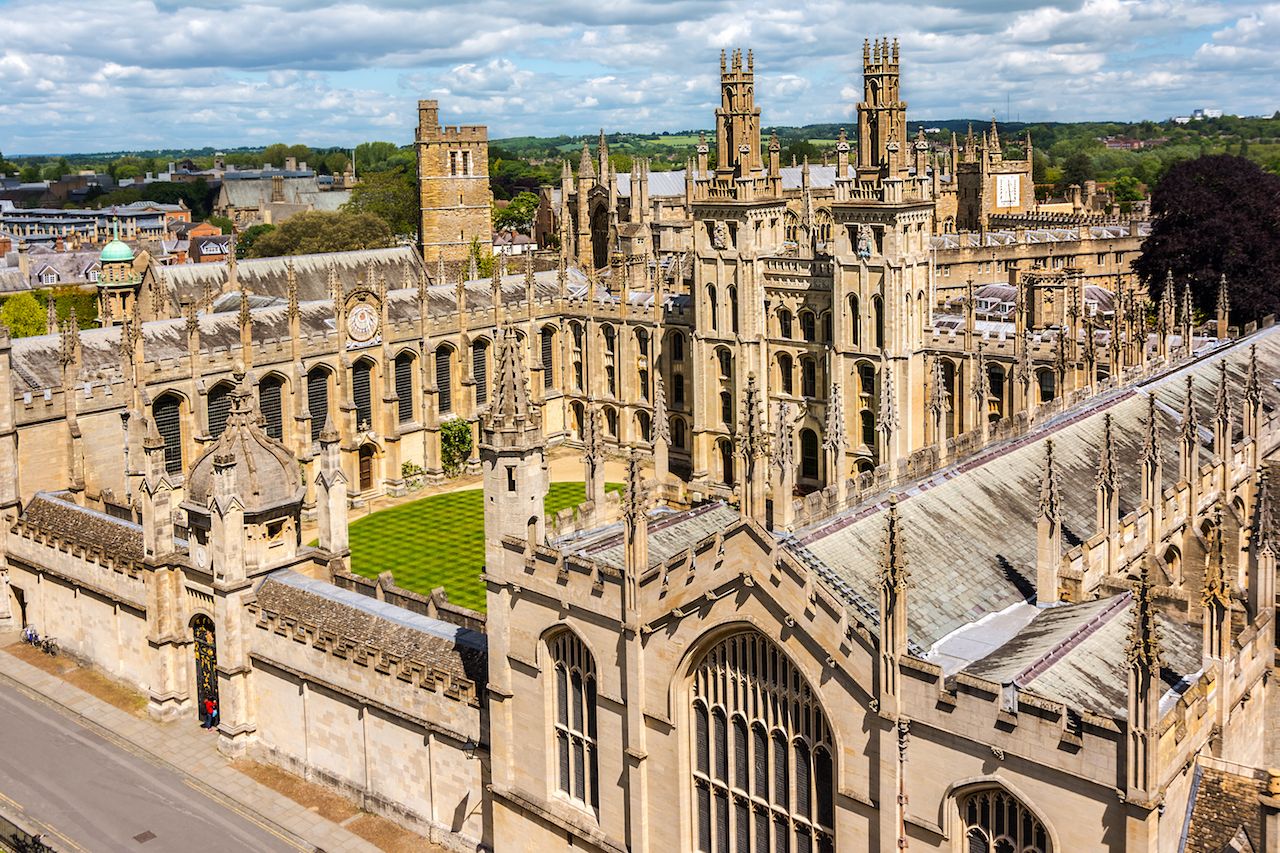 All Souls College is a strange tradition in and of itself. The university’s most mysterious college, it stopped accepting undergraduates in the 19th century and only admits a few new grad students each year. There are only a dozen students attending the college at any one time due to its prestigious reputation and rigorous selection criteria. The All Souls entrance exam is famous for its difficulty. The most infamous section of the exam was the one-word essay. Students were given an index card with a single vague word — water, justice, power, etc. — and asked to write a lengthy essay on it. Luckily for All Souls hopefuls, this portion of the exam was dropped in 2010.

In apparent contrast to the college’s erudite image, one of its oldest traditions is the Mallard Song. Sung only once per century, the Mallard Song accompanies a procession of professors, all marching around the college carrying flaming torches. A person dressed as Lord Mallard is carried in a chair, led by someone holding a wooden duck that is tied to a pole. The once-a-century ceremony dates back to the building of All Souls when legend says a mallard flew away from the college’s foundation. The ceremony last occured in 2001, so it won’t happen again until 2101.

10 of the Most Interesting Customs Around the World
Tagged
Culture
What did you think of this story?
Meh
Good
Awesome