Modern trains aren’t exactly known for their breathtaking aesthetics. No one is sad that their three-hour high-speed train journey is coming to an end. Some train stations, on the other hand, seem built to keep you platform-bound. The domed ceilings, columns, gold-adorned walls, and palatial grandeur are enough to make many travelers consider intentionally missing their train so they can hang out in these beautiful train stations a little longer. While that never actually happens (probably), there’s no denying that some train stations in the US are aesthetically pleasing enough to qualify as travel destinations. From the Spanish revival-style Santa Fe Depot in San Diego to Victorian-era Main Street Station in Richmond, these are the most beautiful train stations in the US. 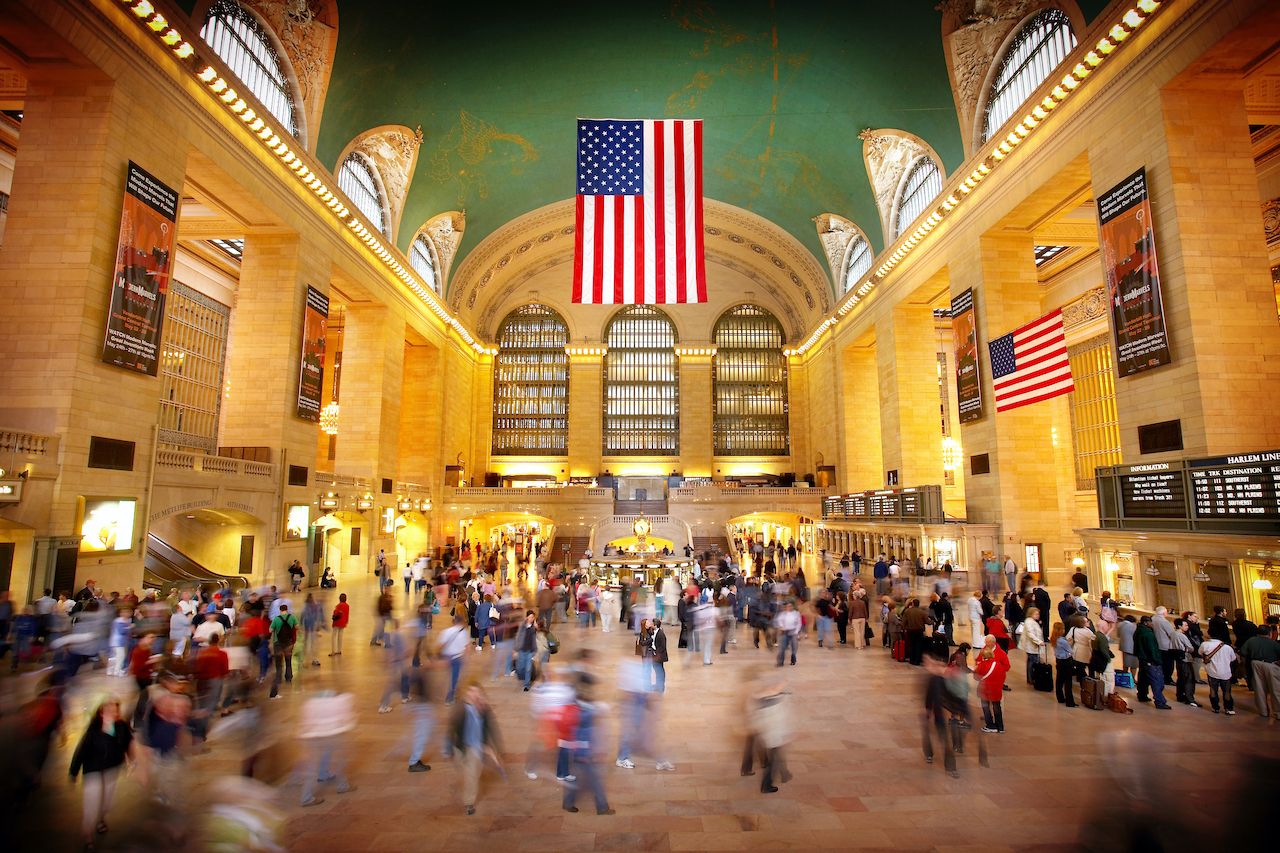 Grand Central Station is arguably the most well-known train station in the US, and not just because it’s one of the busiest. This Beaux Arts-style station is famous for the 25,000 square-foot constellation mural painted across the arched ceiling, its giant chandeliers, striking frescoes, gold clock, and stately staircases. The station opened to the public in 1913, and now serves as far more than just a train station. Attracting more than 750,000 visitors a day in normal years, the terminal also doubles as a world renowned shopping destination and the location of restaurants and bars that can stand up to those in the rest of the city. 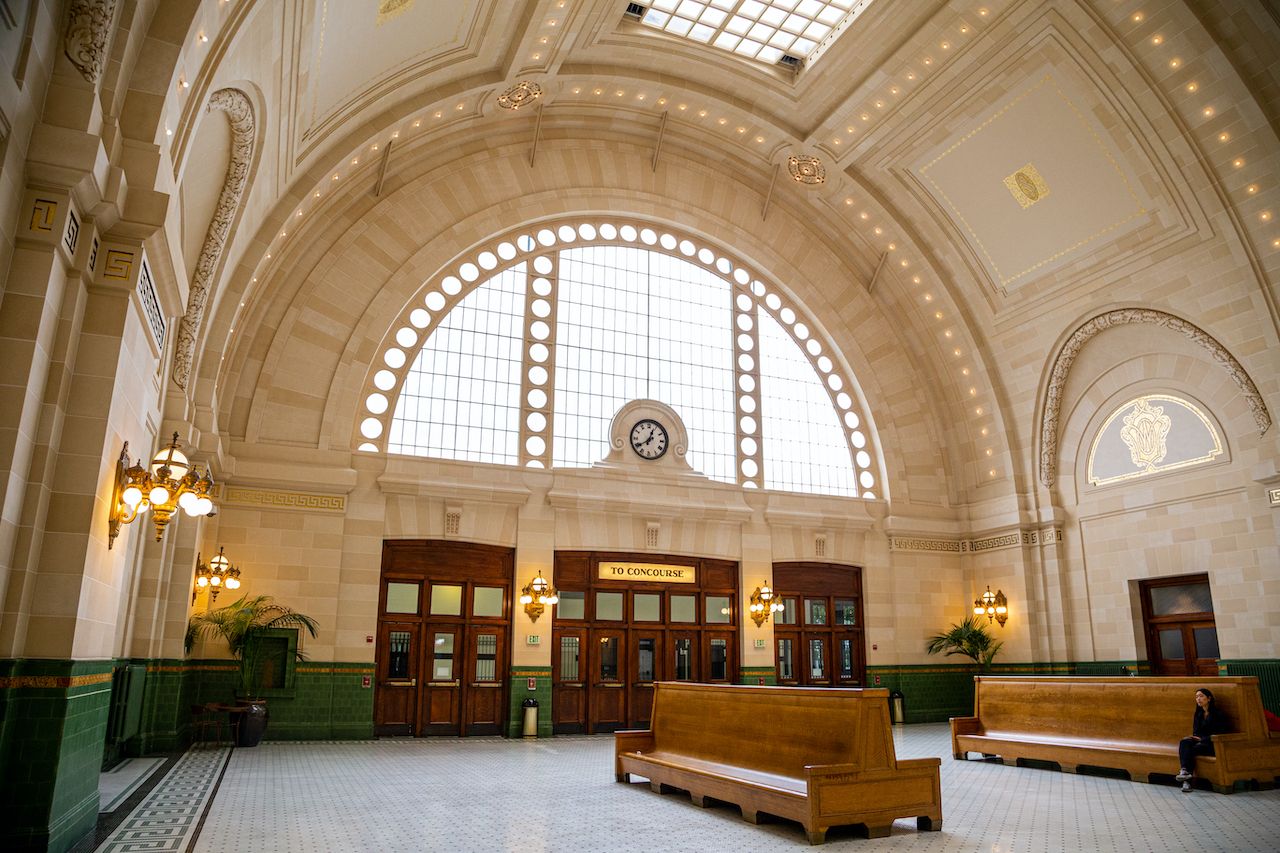 Opened in 1906, Seattle’s King Street Station weathered several attempts by developers to transform the building into something more contemporary. Luckily, in 2010, preservationists succeeded in restoring the main hall to its original form by retaining the beautiful ceiling, complex mosaic floor tiles, and marble columns. The building’s clock tower once made it the tallest building in Seattle, though it’s unfortunately off-limits to visitors. 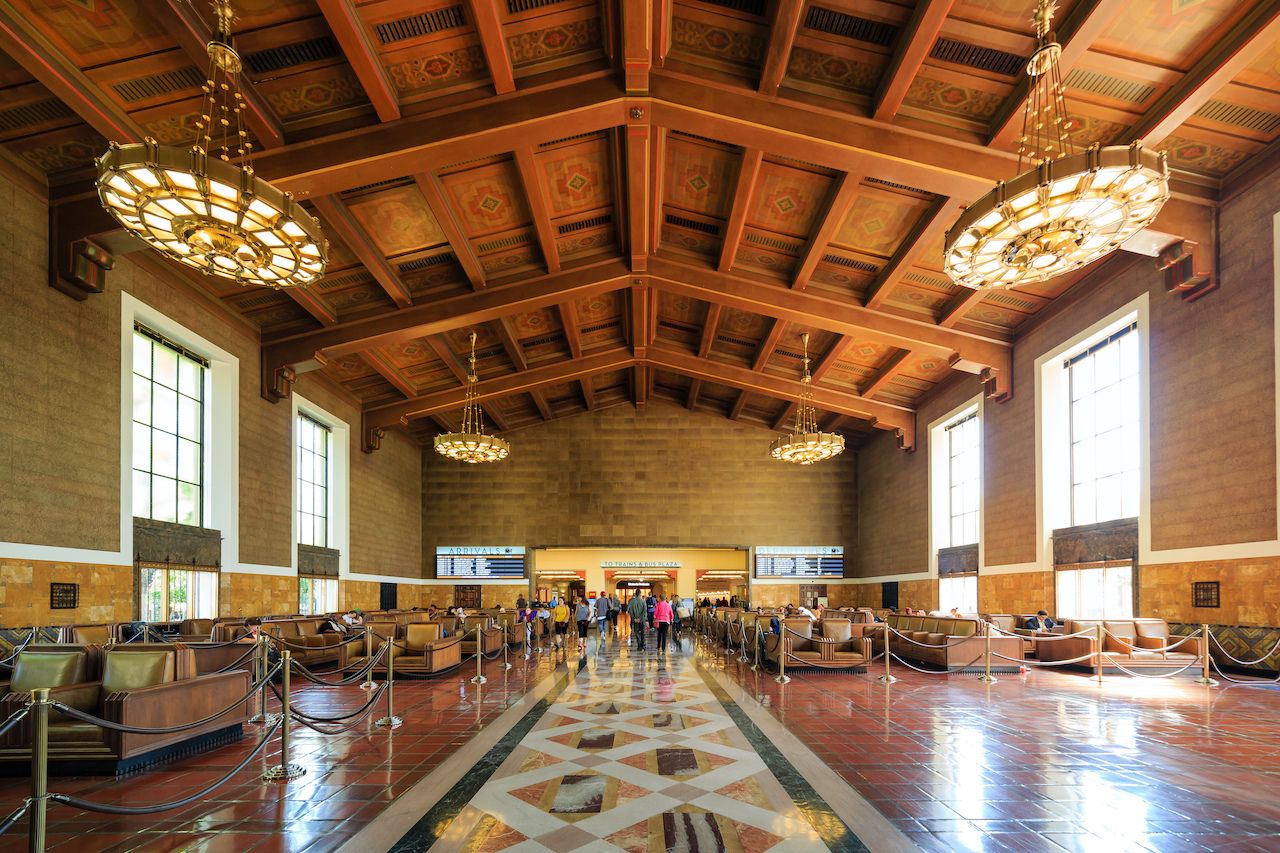 Union Station in Los Angeles doesn’t conform to any established architectural style. Instead it follows one you won’t see pretty much anywhere else: Mission Moderne. The style is a blend of Spanish colonial, Mission Revival, and Art Deco. The result: a building with a truly SoCal vibe. The interior is defined by wood-inlaid coffered ceilings, 1930s-style chandeliers, and leather sofas. There are also gardens and fountains, creating a park-like aesthetic. Perhaps most impressively — and in keeping with its location — the station has starred in several films, including Blade Runner and The Dark Knight Rises. 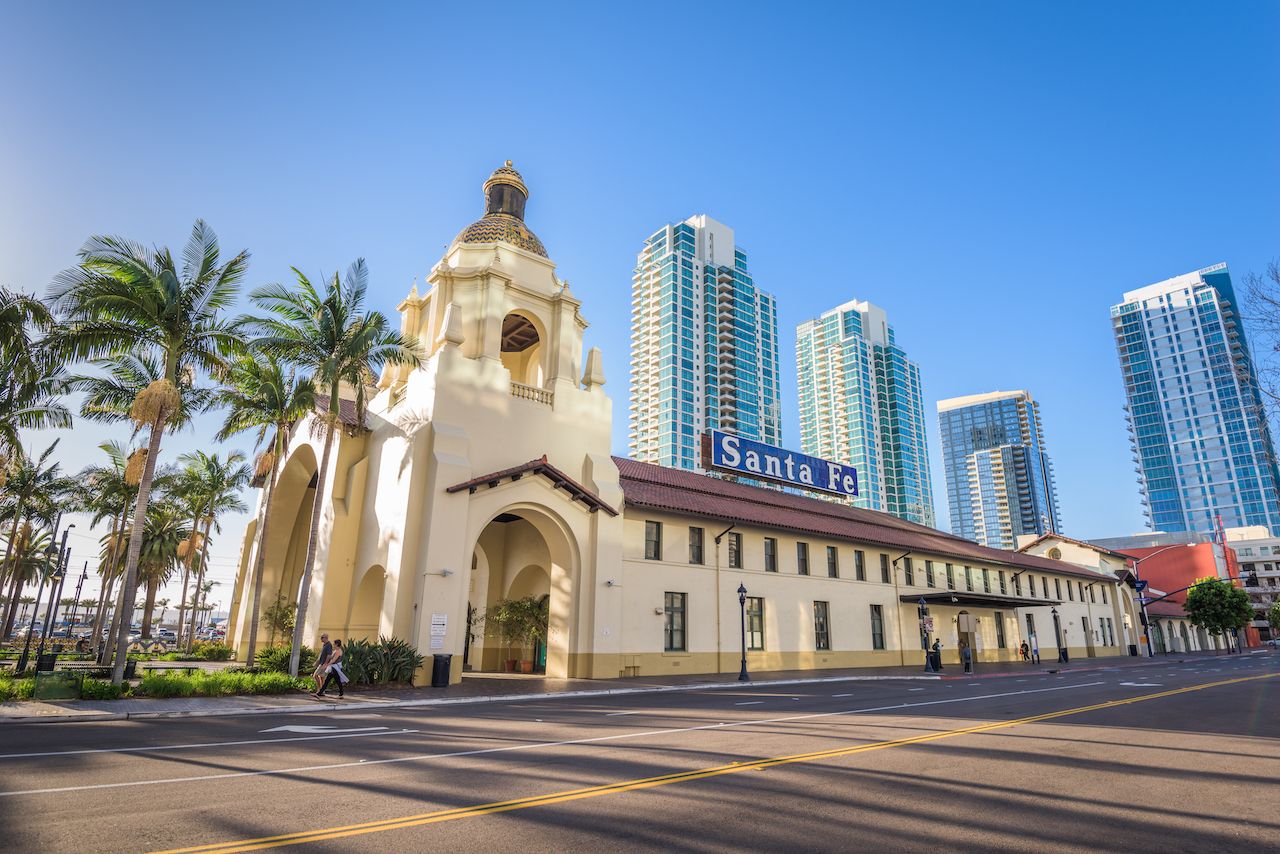 Built in 1915, this train station could easily be mistaken for being located in the Southwest. That’s partly due to its name — Santa Fe Depot — and partly because its architecture resembles what you might find in New Mexico. This station was built in the Spanish Revival style that resembles many 17th-century missions. The interior features redwood beam ceilings and walls defined by bright tiles and intricate Hispano-Moorish designs. Since the station is centrally located, it’s also an easy walk to the waterfront boardwalk. 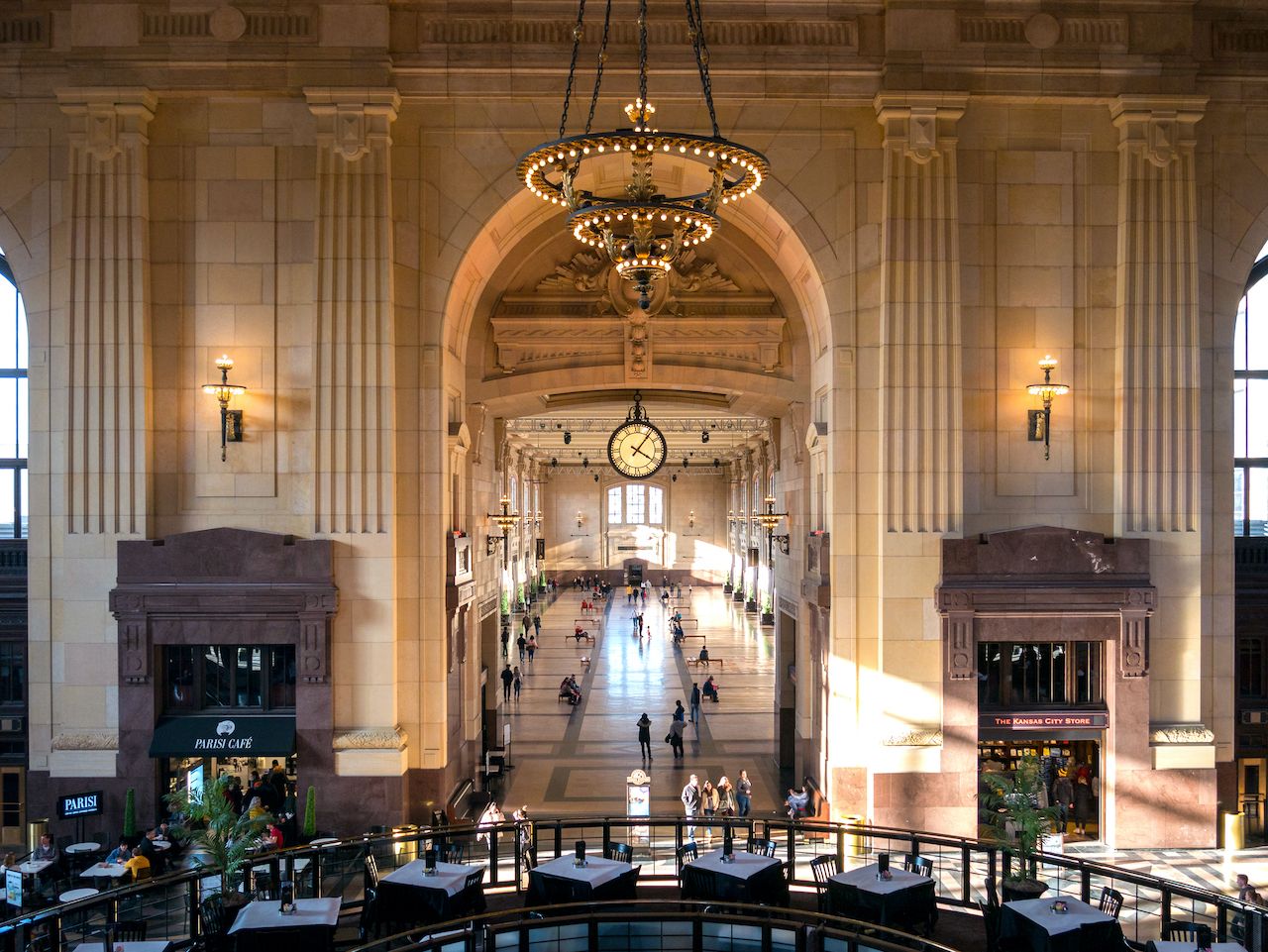 Built in 1914, Kansas City’s Union Station is a shining example of Beaux-Arts architecture. The Great Hall’s most eye-catching features are: the 95-foot ceiling with oak clusters, the chandeliers, the massive clock, and the terracotta floors. Although the staton’s historic feel alone is enough to draw you there, more recent additions make the space even more original. It’s home to a rail history exhibit, a planetarium, a science center for kids, and a movie theater. The station also has a long history that’s not all glitz and glam. One of the most infamous moments in Kansas City’s Union Station past is the Kansas City Massacre in 1933, when five people were killed during a gang shootout. 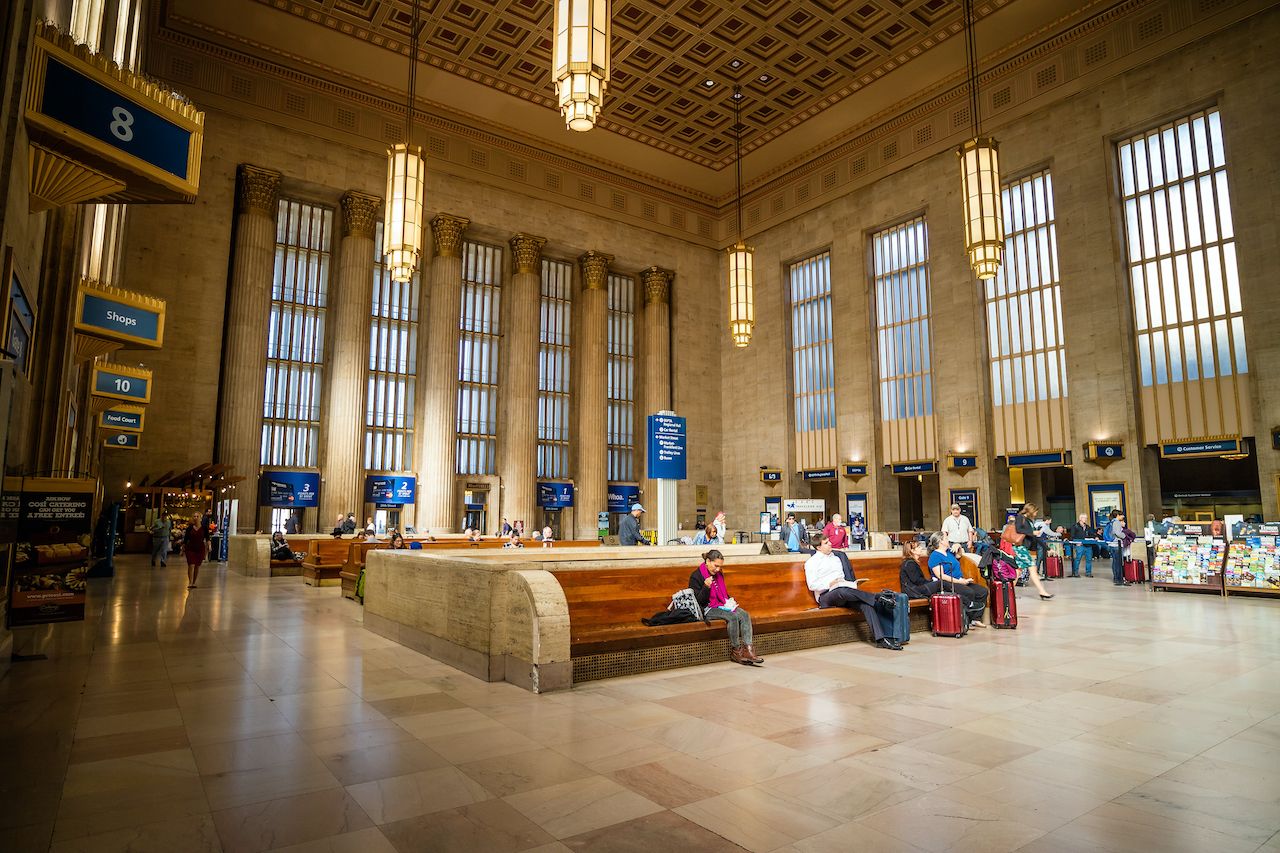 Usually the goal is to spend as little time as possible in busy train stations, but not if it’s Philadelphia’s 30th Street Station. The grand building is defined by its Art Deco chandeliers and its vast waiting rooms that stretch over 200 yards. Originally built for the Pennsylvania Railroad, this neoclassical building also has 71-foot-tall Corinthian columns, high gold, red, and cream-colored ceilings, and cathedral-style windows. Like any train station worth its salt, it featured in several Hollywood films, including Marnie and Witness. 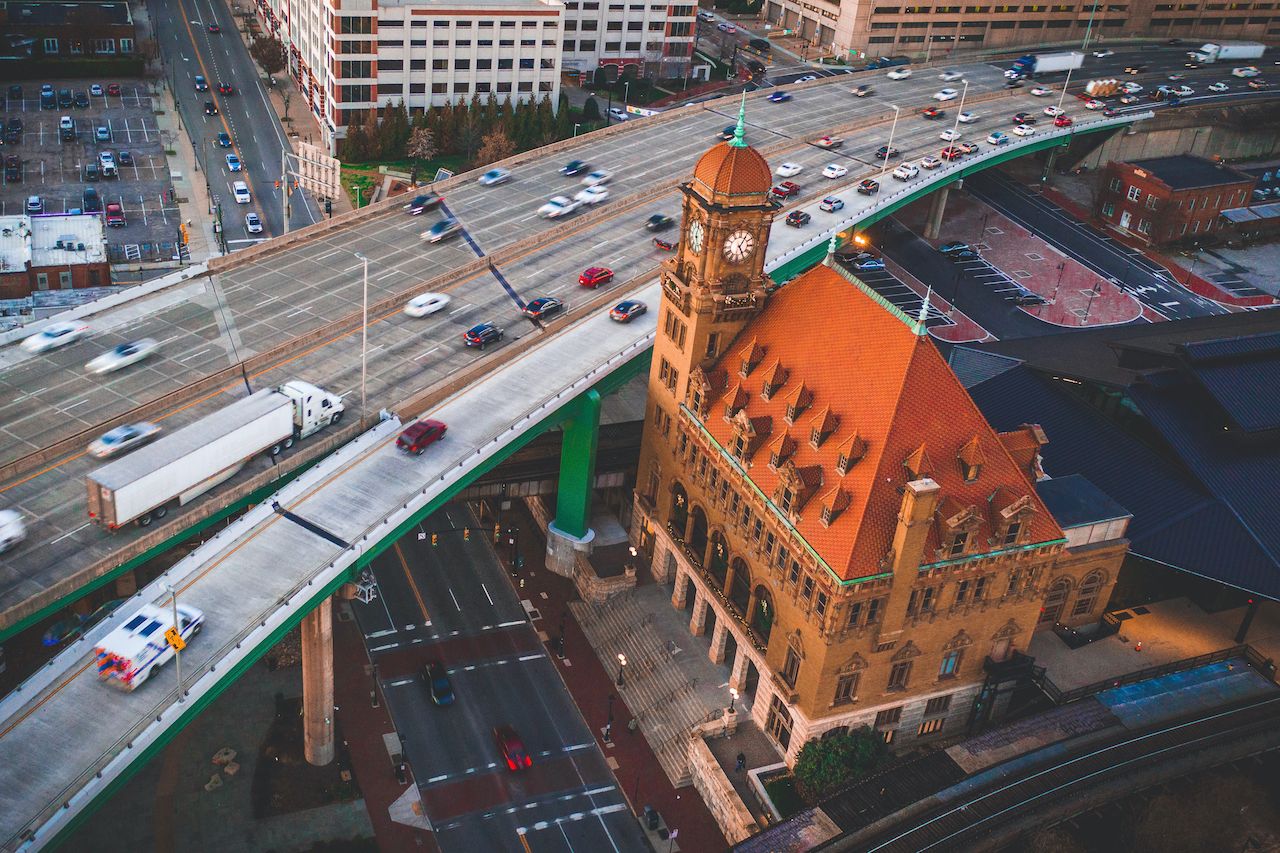 You don’t even have to get off the highway for this train station to make an impact. Its six-story brick clock tower is visible from I-95. Inside, you’re greeted by a fully restored Victorian-era hall that’s colored white, peach, and green. Its platform is supported by the largest intact train system in the country, and was one of the last gable-roofed train sheds ever built. For good reason, it’s been added to the National Register of Historic Places and is designated a National Historic Landmark.