If you want to enjoy the natural scenery of the United Kingdom the way the locals do, go for a walk… a really long walk. From Cornwall to Scotland, you can trek from a week to two months across rolling hills, along coastal tracks, through urban sprawls, or in shaded woodlands.

The United Kingdom is crisscrossed with walking paths, both paved trails and rugged landscapes. Some walks offer plenty of accommodations along the way, so you won’t need to carry tents and food, although others might require some nights at a campground. Here are some of Britain’s finest walking trails. 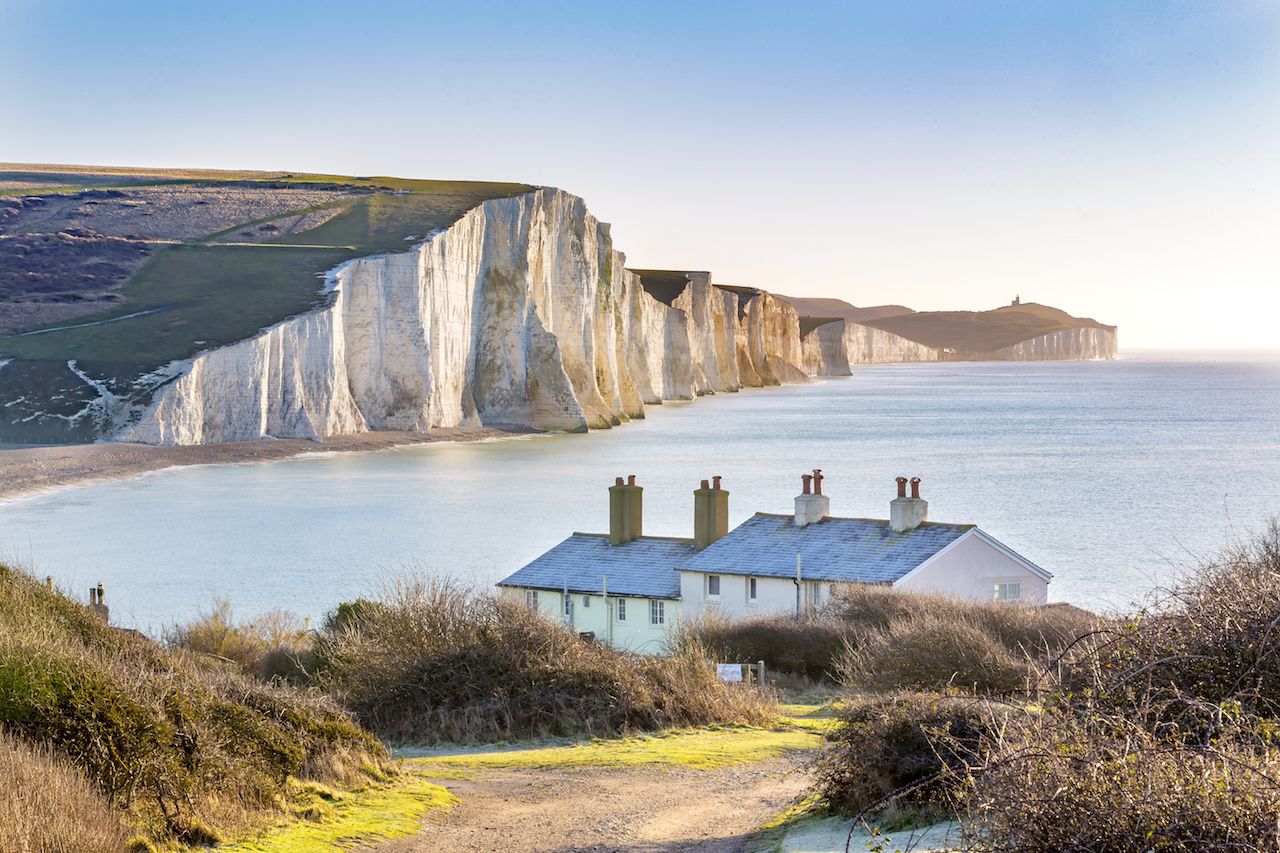 In Southern England, South Downs Way starts at Winchester in Hampshire and ends in the seaside town of Eastbourne in East Sussex. This is the only path that lies entirely within the confines of a national park. The tracks crisscrossing the Sussex Downs have been used by settlers for six thousand years, from Bronze Age traders to ancient Romans.

The path is well defined and passes through ancient forests, small villages, and rolling countryside. Highlights include the chalk cliffs of Beachy Head and Seven Sisters, as well as the mysterious “Long Man of Wilmington,” an ancient figure etched into the hillside. Amazing views of the English Channel are a constant feature of the walk.

The transport links are good, but there is very little accommodation on the trail itself. Most nights, you’ll have to walk a mile or two off-trail to reach a hotel or hostel. 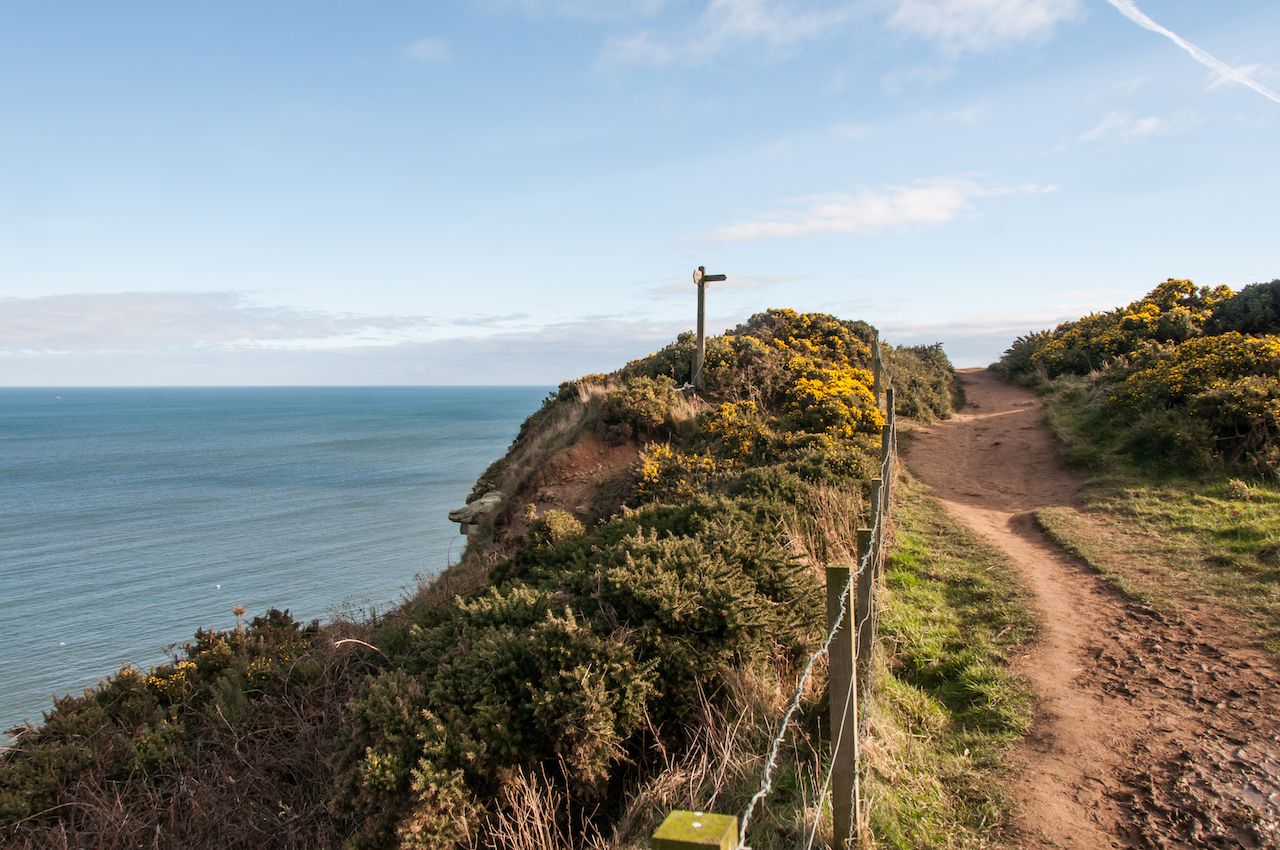 Conceived by celebrated hill walker Alfred Wainwright, the Coast to Coast walk is one of the UK’s most scenic trails, spanning three national parks and crossing England from its western to eastern coast. Kicking off at St. Bees on the coast of the Irish Sea, the route cuts through the rugged mountains of the Lake District across the rolling Yorkshire Dales and North Yorkshire Moors. It finishes at Robin Hood’s Bay on England’s eastern shore on the North Sea.

Lodging is limited, and most of it is located in the small villages through which the trail passes. You should book early, especially in the summer months. There are several campsites close to the path. Farms and pubs often offer a place to camp for a few pounds a night, as well. 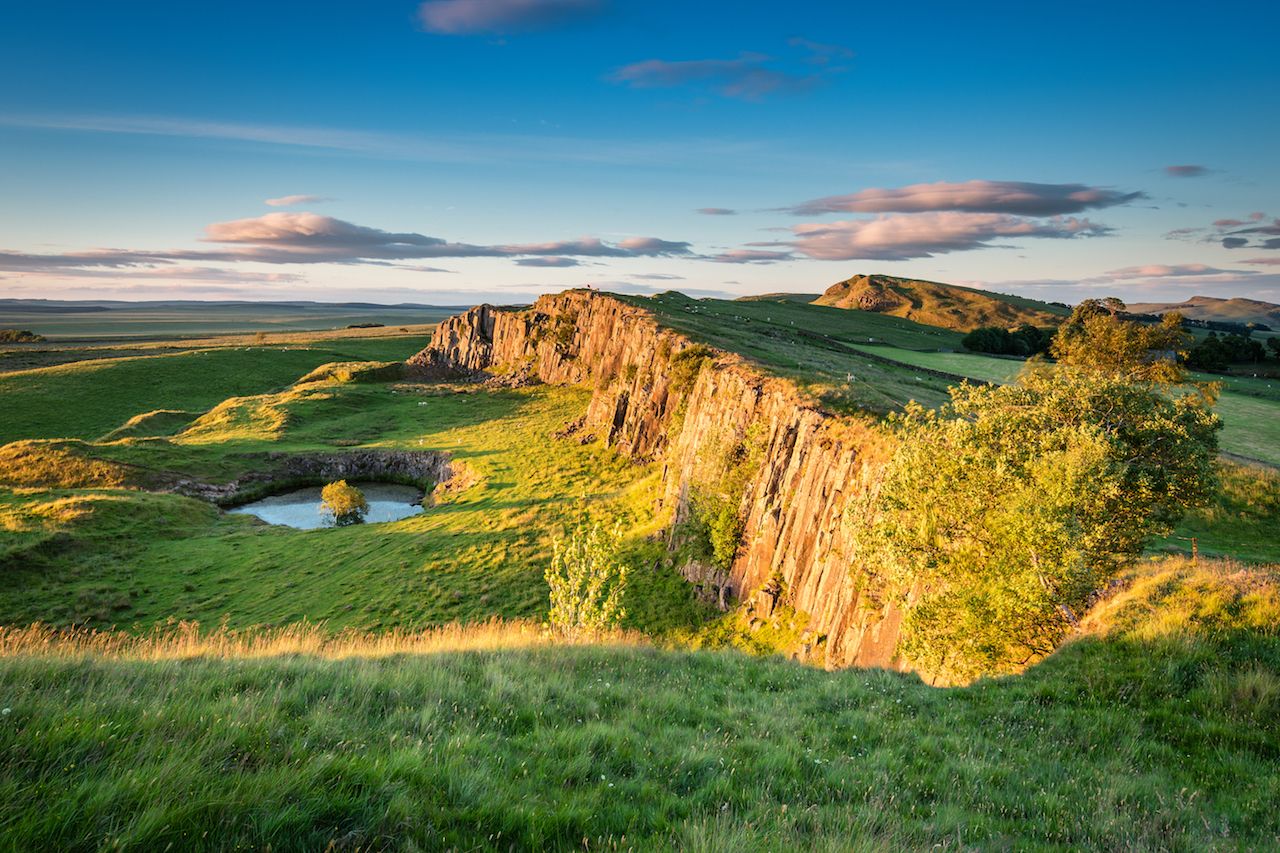 Pennine Way, Britain’s oldest trail, follows the mountainous backbone of the country, and much of the landscape is remote and wild. The terrain is tough, the greatest challenge being the notorious peat bogs. It starts at Edale in Derbyshire, not far from Manchester, and finishes at Kirk Yetholm across the Scottish border. Points of interest include Hadrian’s Wall and Withins Heights, the inspiration for Emily Brontë’s Wuthering Heights.

Hostels, bunk barns, and B&Bs can be found at various locations along the way, but there are sections where accommodation is a little scarce. The 17th-century watering hole, Tan Hill Inn, on the Yorkshire Dales is the highest pub in the UK and the perfect place to down a pint. 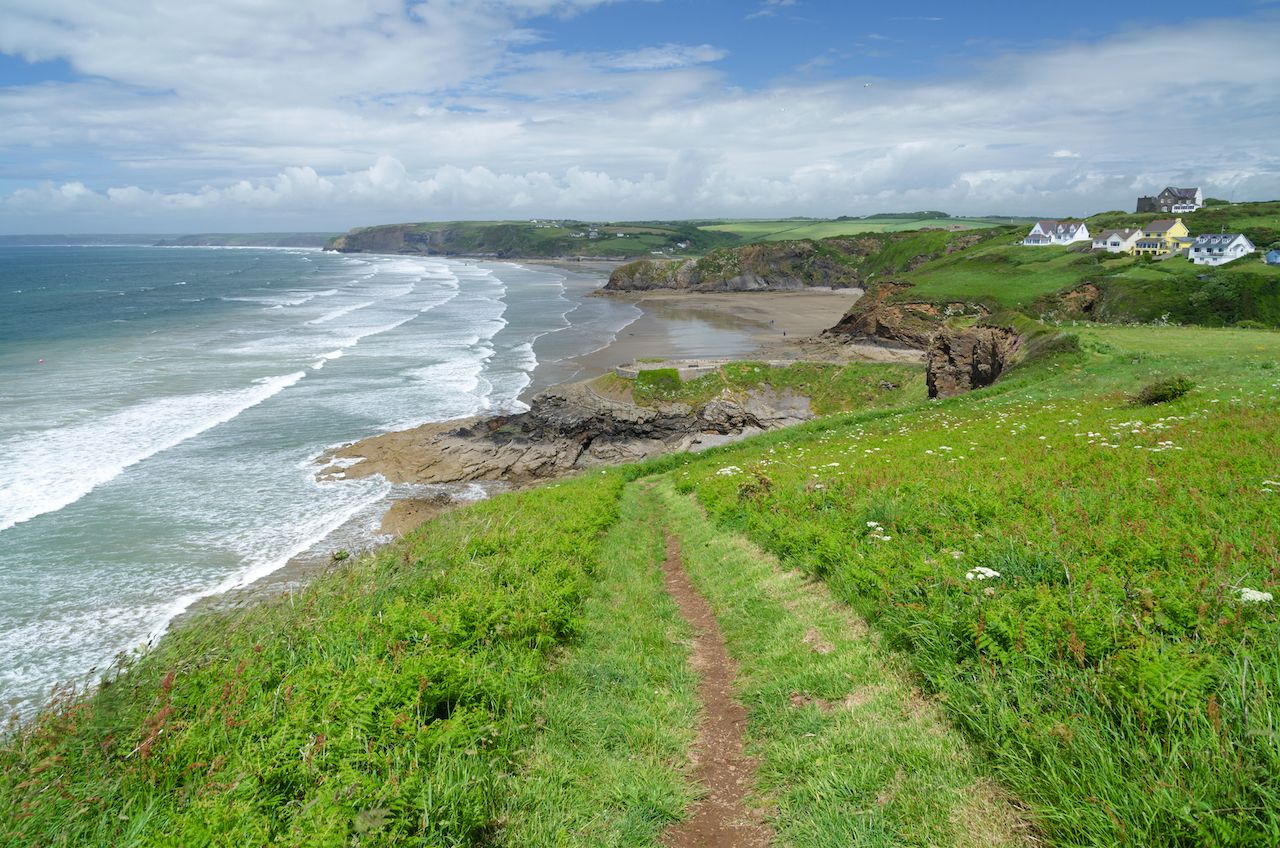 The Wales Coast Path, which opened in 2012, is the first trail in the world to hug the entire coastline of a national region: Wales, in this case. The 870-mile path starts in the English town of Chester, close to the Welsh border. It continues to traverse traditional seaside towns and miles upon miles of sandy beaches. The scenery, however, consists of more than just beaches. You’ll also see castles, cathedrals, and lighthouses, and even pass through Cardiff.

If you don’t have two months to spare, you can walk sections of the path for shorter periods of time. The roller coaster of steep ascents and descents makes the hike challenging at times, but the varied scenery makes it all worthwhile. There is no lack of accommodation, whether you are seeking a night under canvas or a touch of luxury in a stylish hotel. 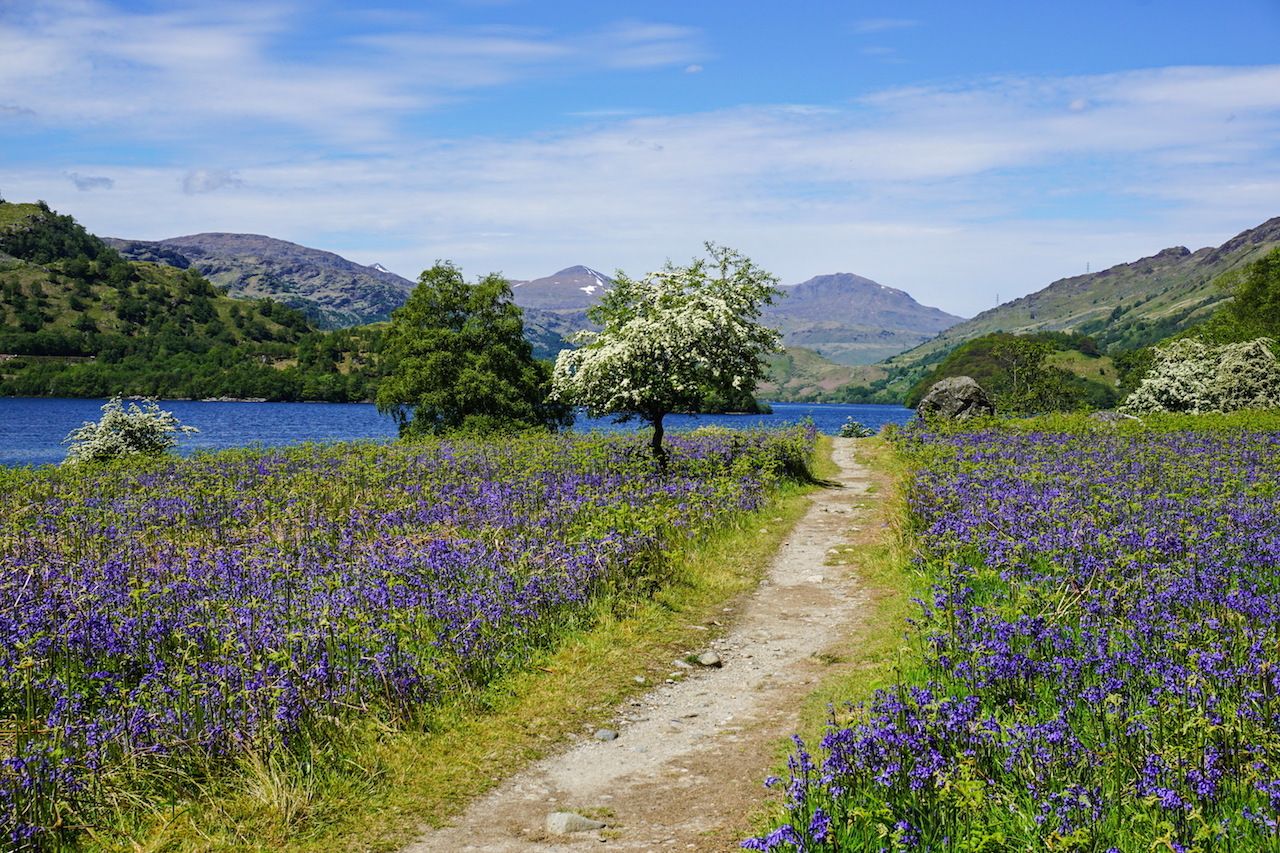 Beginning on the outskirts of the city of Glasgow, the West Highland Way weaves its way due north to the foot of Britain’s highest mountain, Ben Nevis. It’s a spectacular route, displaying Scotland’s beauty from the shores of Loch Lomond to the rugged and majestic landscape of the Highlands. The trail is a combination of stone, tarmac, and gravel, and it’s rocky in parts. The way markers are plentiful and easy to follow.

You’re in northern Scotland here, so bring warm clothes, rain gear, and ponchos. You won’t need much in the way of other supplies, though, as there’s an abundance of lodgings and markets. There are even honesty boxes set up by locals with drinks and snacks placed in them — a welcome sight when you need an energy boost! 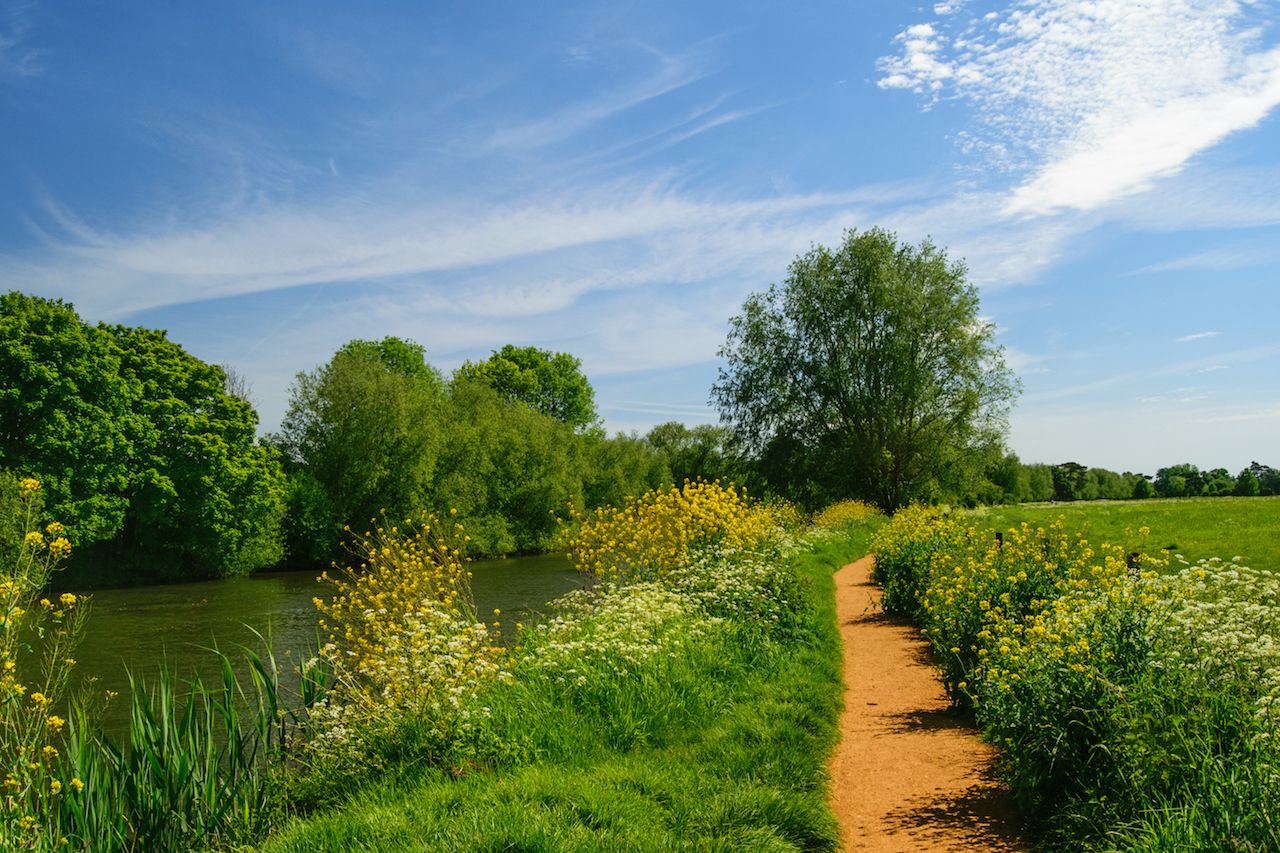 Following the River Thames from its source in Kemble to the Thames Barrier in Greenwich, London, the Thames Path is flat and easy. Through pastoral countryside, the market town of Henley-on-Thames, and Oxford — the city of dreaming spires — to the metropolis of London, this path is perfect for anyone tackling a long walk for the first time.

Additionally, the signage is excellent, and there are lots of opportunities for supplies and accommodation. Best of all? There is no shortage of pubs to revive your spirits at the end of a long day’s trek. 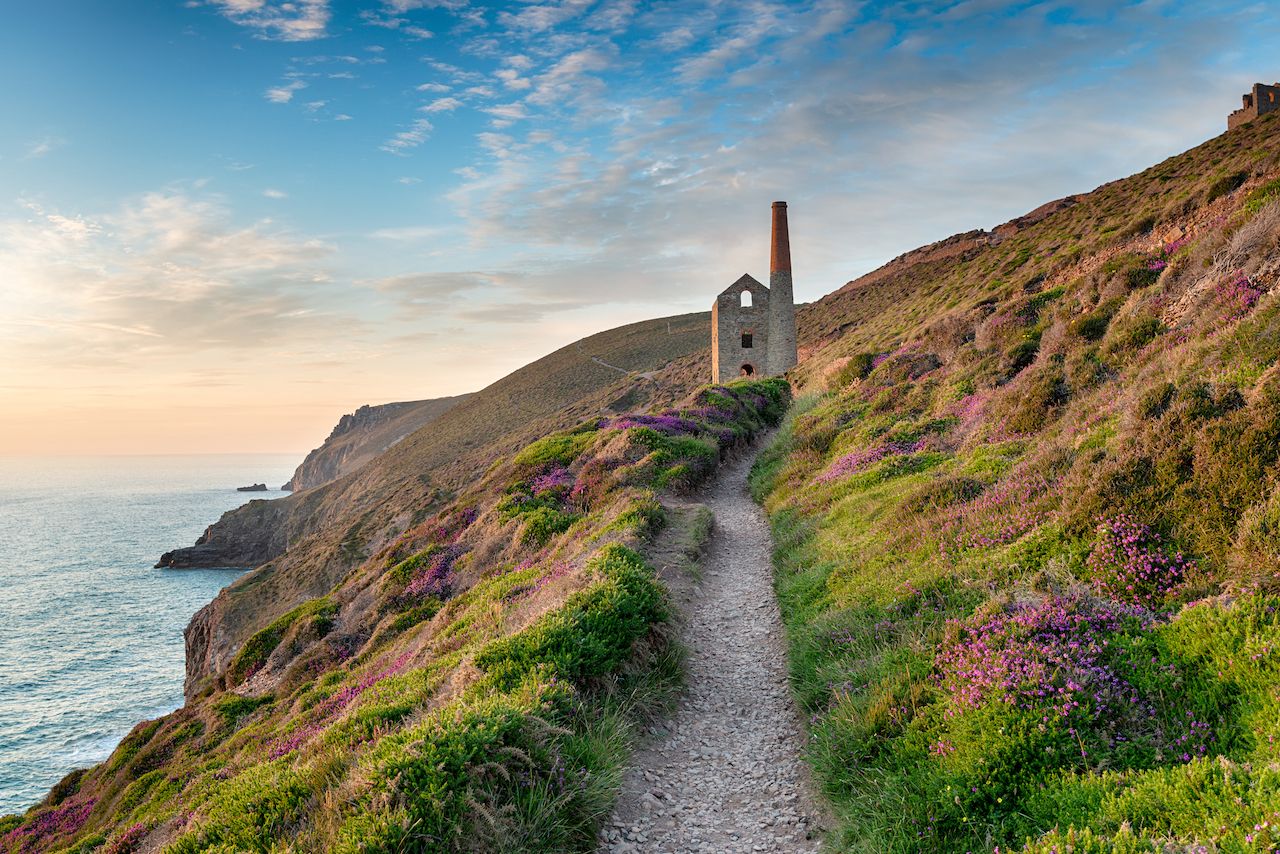 Coastguards created this trail to look out for smugglers along the craggy coastline. The South West Path starts in Minehead, Somerset on the northern side of the arm of Cornwall and heads west towards Lands End, where it turns back east along Cornwall’s southern flank to end up at Poole Harbor in Dorset, England.

The trail is strenuous in places with steep hills between the bays, coves, and harbors, so even experienced walkers should plan to walk fewer daily miles than they would on easier terrain. The trail passes Exmoor, where ponies and deer run wild; Land’s End, where you might spot orcas and dolphins from the 200-foot-high cliffs; and Tintagel Castle from the legend of King Arthur. Aficionados usually tackle one section of the path at a time, taking years to complete it all. B&Bs, hotels, hostels, and campsites are plentiful.

Maps + InfographicsIf You Walk 500 Miles From Vienna, You Could Visit 30 Different Countries
Tagged
Hiking National Parks United Kingdom Manchester, England
What did you think of this story?
Meh
Good
Awesome