Imagine a landscape that combines Yellowstone and Yosemite, but without the eight million visitors per year — that’s Mammoth Lakes, CA. A town built for the great outdoors, it sits at a towering 7,880 feet above sea level, hugged on all sides by the stunning peaks of California’s Eastern Sierra. A skier’s paradise in winter, Mammoth Lakes transforms into a volcanic wonderland of waterfalls, hiking trails, and paddling sessions come summer. Believe it or not, this is the off-season.

Thrill-seekers can race down last season’s ski trails on mountain bikes or climb crevice-lined rocks that reach dozens of stories into the sky. Families can kayak, fly fish, or wander an endless series of trails to discover unearthly marvels: volcanic craters, geothermal springs, and alkaline lakes speckled with lunar-looking columns of limestone. In and around Mammoth Lakes, there’s a postcard landscape around pretty much every turn — but these seven will really blow you away. 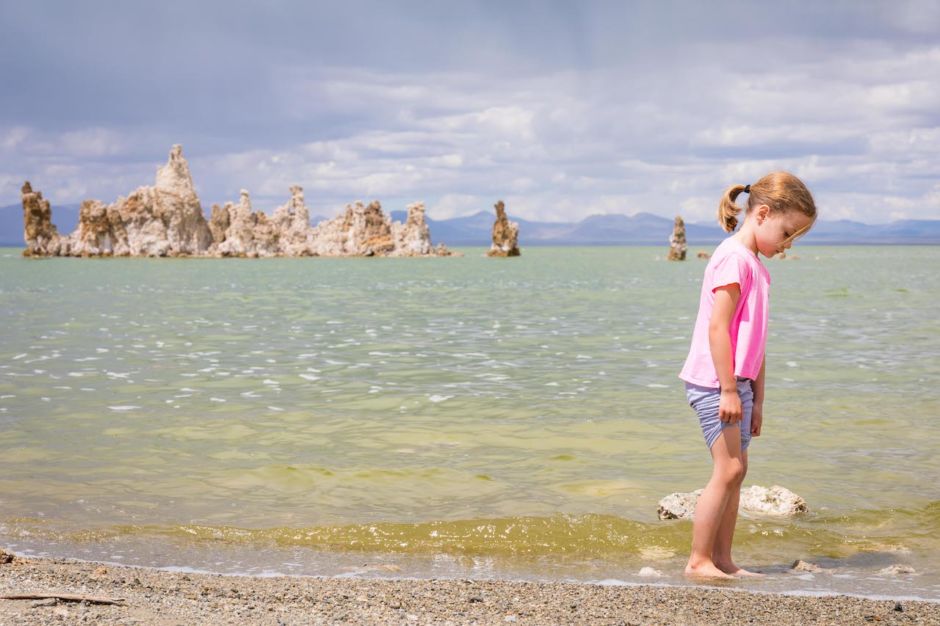 The first glimpse of this 70-square-mile expanse likely elicits the same reaction from everyone: “Whoa.” Formed more than 760,000 years ago, Mono Lake has no outlets. That means, for millennia, all the salt and mineral runoff from the surrounding mountains has collected in it, making it briny, inhospitable to fish, and thus oddly serene. Those minerals, over the years, have caused something else remarkable: jagged columns of calcified limestone that jut out from the pale water like spindly moon rocks, called “tufas” (that’s too-fuhs).

The best spot for tufa-viewing is along Mono Lake’s south shore. These pebbly, tufa-spiked beaches are a short, flat, partly boardwalk-lined stroll from the parking lot. Motorboats are prohibited on Mono Lake, but if you want to get a closer look, you can go by kayak, paddleboard, and canoe. Swimming is allowed as well — just don’t climb on or touch the tufas. 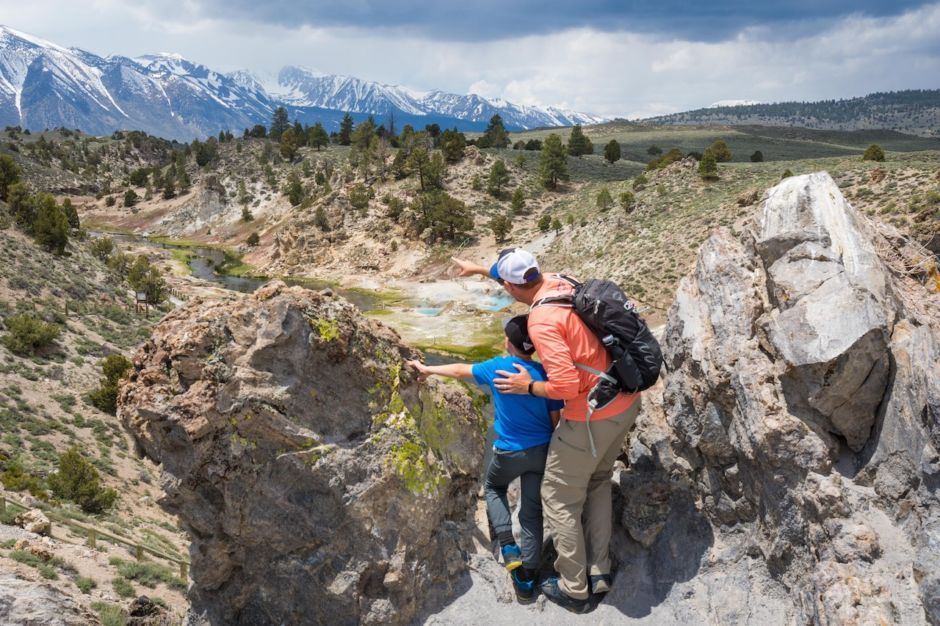 At the Hot Creek Geological Site, a series of steamy, milky-blue pools bubble away literally feet from the course of a cold mountain stream. They look out of place, as if bits of some tropical beach were flown north and plopped down right here in the High Sierra.

Fueled by pressurized, magma-heated underground springs, the water in these pools often exceeds boiling point. The rest area and paved trail along the south side of Hot Creek are the perfect places for families to marvel from a safe distance. (This was a spot our kids yawned about during the 20-minute drive from Mammoth Lakes. But once they caught a glimpse of the steaming turquoise waters, their tune quickly changed to blissful, childlike awe.)

This is also a great spot for photos, with the Eastern Sierra’s snow-capped peaks framing the already surreal landscape. You’ll blow not only your minds, but also those of your Facebook and Instagram friends. 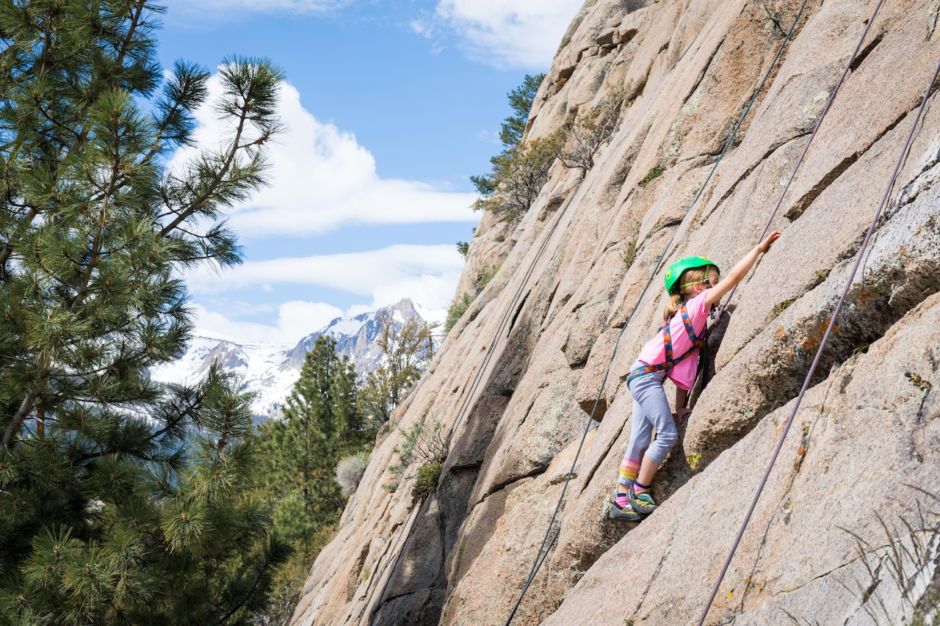 The canyon walls, boulders, and cliffs in and around Mammoth Lakes can be deceiving — they may look extreme, but you don’t have to be a pro to start scrambling here in the epicenter of Eastern Sierra rock climbing. Check out the granite tower of Crystal Crag, the dimpled volcanic rock of Clark Canyon, the massive, stand-alone boulders along Rock Creek…the area abounds with options.

Local guides, like the folks at Ground Up Climbing Guides, lead advanced climbers to Yosemite-level pitches but can also teach kids and newbies the basics of this addictive sport. Part teacher, part coach, part cheerleader, your guide will literally show you the ropes — and then safely strap you into them. Shoes, helmets, and (most importantly) decades of expertise are provided. All you need is a sense of adventure. 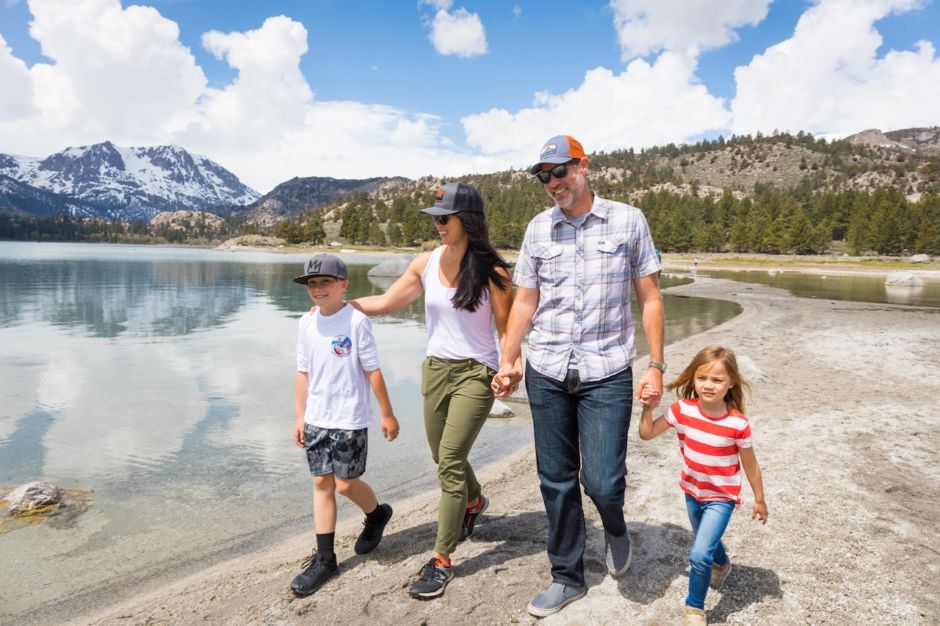 Follow I-395 as it snakes north from Mammoth Lakes, turn onto this semicircle of highway (Route 158), and you’re no longer in California: You’re high in the Alps surrounded by towering evergreens and the pebbly beaches of Grant Lake, Silver Lake, Gull Lake, and the namesake June Lake. Connected by a series of babbling creeks and backed by the rushing waterfalls trickling down June Mountain, this 16-mile stretch of road might just be the most scenic drive in the country.

Kayaks, paddleboards, and motorboats are available for rent from the lakes’ respective marinas. Those looking for a lazier day can picnic along the rocky shores, wade into the cold mountain waters, or just sit back and lap up the views. For hikers, the loop drive also brings you to several trailheads. You’ll be here for a while, so grab a local brew and a Hawaiian-inspired burrito at June Lake Brewing. Otherwise, Silver Lake Café is a classic roadside diner that’s fresh and homey. 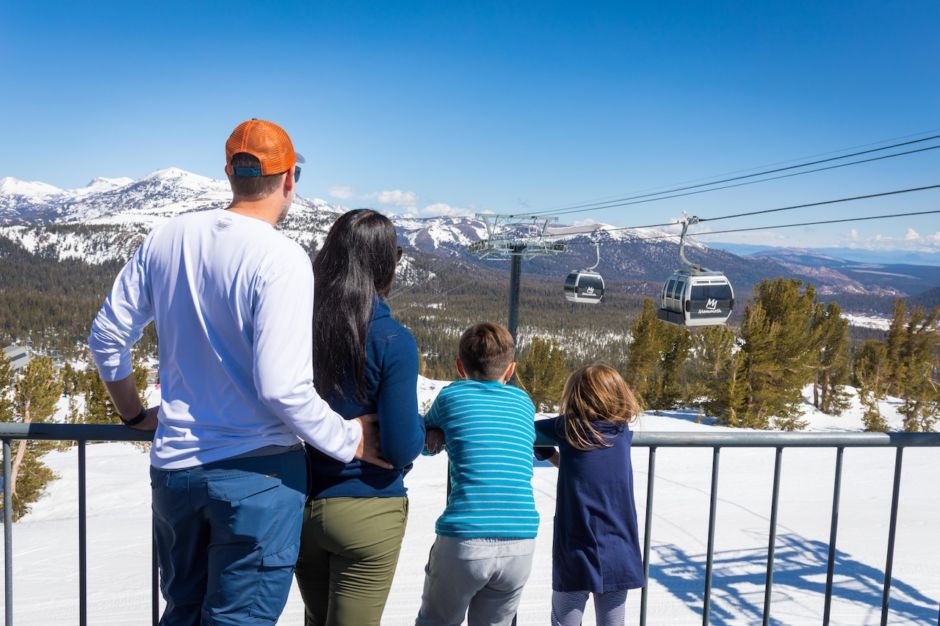 To really appreciate how incredible the High Sierra landscape is, get on the Panorama Gondola for a ride to the top of Mammoth Mountain. At 11,053 feet of elevation, Mammoth’s summit is one giant 360-degree view of this vast and rugged region. It’s also home to the Eleven53 Interpretive Center, where you’ll learn about the natural history, ecology, and wildlife of the area.

During winter, the window-lined gondola cars transport skiers and snowboarders to their powdery launch points. In summer, mountain bikers take advantage of the lift, saving their energy for the adrenaline-pumping twists and turns that will send them racing back to town. (Mammoth Mountain also offers less extreme mountain-bike trails for youngsters and rookies. The experts at the Mammoth Mountain Bike Park can point you to the right trail and equip you for it at the same time.) 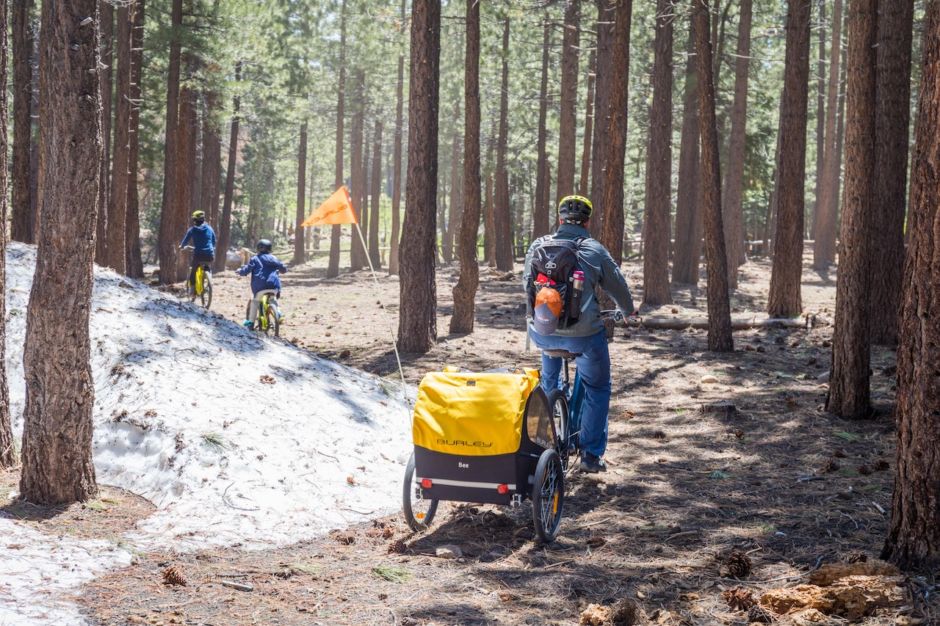 If racing down winding mountain trails on two wheels isn’t quite your speed, check out the Town Loop, a scenic seven-mile bike path that circles Old Mammoth. Paved in parts and well-maintained gravel in others, the loop offers mesmerizing views of the Sherwin Range and Mammoth Creek. More advanced cyclists and mountain bikers can use the Town Loop as a launching point to connect to the miles of off-road trails and paved paths that crisscross the region.

Cyclists of all ages and abilities can gear up at Footloose Sports, Wave Rave, or any of the other locally owned sporting-goods rental shops along Main Street. In summer, in addition to paddleboards and kayaks, these stores rent out mountain bikes and electric bikes that make the uphill climbs child’s play (regardless of your age). 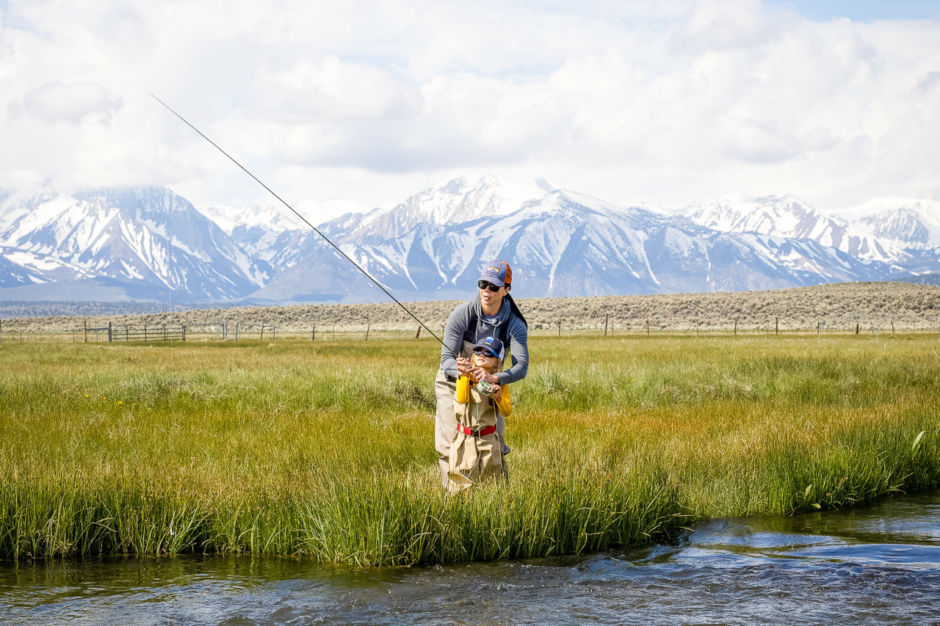 You might come to the Upper Owens to fly fish for rainbow and cutthroat trout, only to drop your rod and stare — OMG, the views! It’s hard to distinguish between a roll cast and a curve cast when you’re surrounded by such beauty.

The Upper Owens isn’t so much a river as it is a fairy-tale stream that winds through lush meadows dotted with marigolds and the odd bluebird. On one side: the snow-capped peaks of the Sierra Nevada. On the other: the jagged slopes of the Glass Mountain Ridge. In the middle: water and rolling fields of grass and — why are you here again? — oh yeah, trout. The river connects to some of the best stillwater fisheries in the West. During spring and fall spawning, it’s home to hefty rainbows and massive browns, some of which are so huge they’ve been nicknamed “Sierra steelhead.”

If you didn’t pack your rod and waders, head to one of Mammoth Lakes’ many locally owned sporting goods shops. Places like Kittredge Sports, The Troutfitter, and Rick’s Sport Center have the gear and guides to make anyone competent with a fly rod. And if fly fishing has you hooked, you’ll find more hot spots along Crowley Lake, the San Joaquin River, and the stunning Convict Lake — all of which are set in yet more landscapes that might just blow your mind.

This post is proudly produced in partnership with Mammoth Lakes Tourism.
Tagged
Travel
What did you think of this story?
Meh
Good
Awesome

Family Ski Trip To Mammoth Lakes: Everything You Need To Know

7 Ways To Experience Winter in Mammoth Lakes, Beyond Snowboarding

How To Piss Off Someone From Mammoth Lakes, California

20 Signs You Learned To Drink in Mammoth Lakes, California