World travelers are no strangers to bright, beautiful flora. There are almost as many tourists as lavender blooms in Provence, France, come summer. Springtime sees cherry blossom festivals across Japan that draw visitors by the thousands, all eager to be showered in white and pink buds. But lesser-known flowers, although just as striking and even more intriguing, seem to elude travelers entirely. From the rainforests of South Asia to the woodlands of North America, here seven fascinating flowers that are definitely worth booking a flight to see up close. 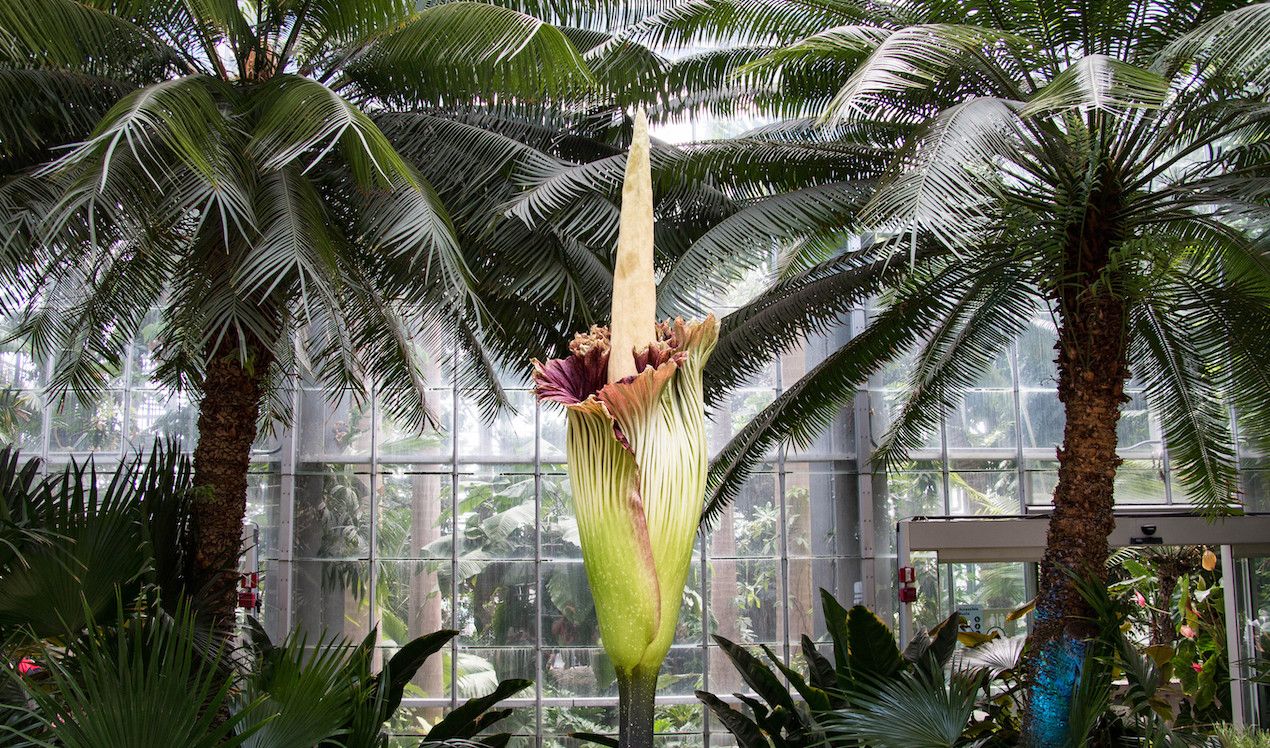 The titan arum plant produces the most individual flowers grouped together on a stem of any species in the world. Blooms are uncommon, occurring up to 10 years apart in cultivation. When the flower does grow, however, it doesn’t stop; the record-breaking bloom in cultivation measured nearly nine feet high. But impressive size is not the only distinguishing characteristic of this strange species. It’s also a carrion flower, or corpse flower, aptly nicknamed for the extreme odor it produces. Titan arum is indigenous to Sumatra and Java, so you know what to look out for if you smell rotting flesh while trekking through the rainforests of Indonesia. 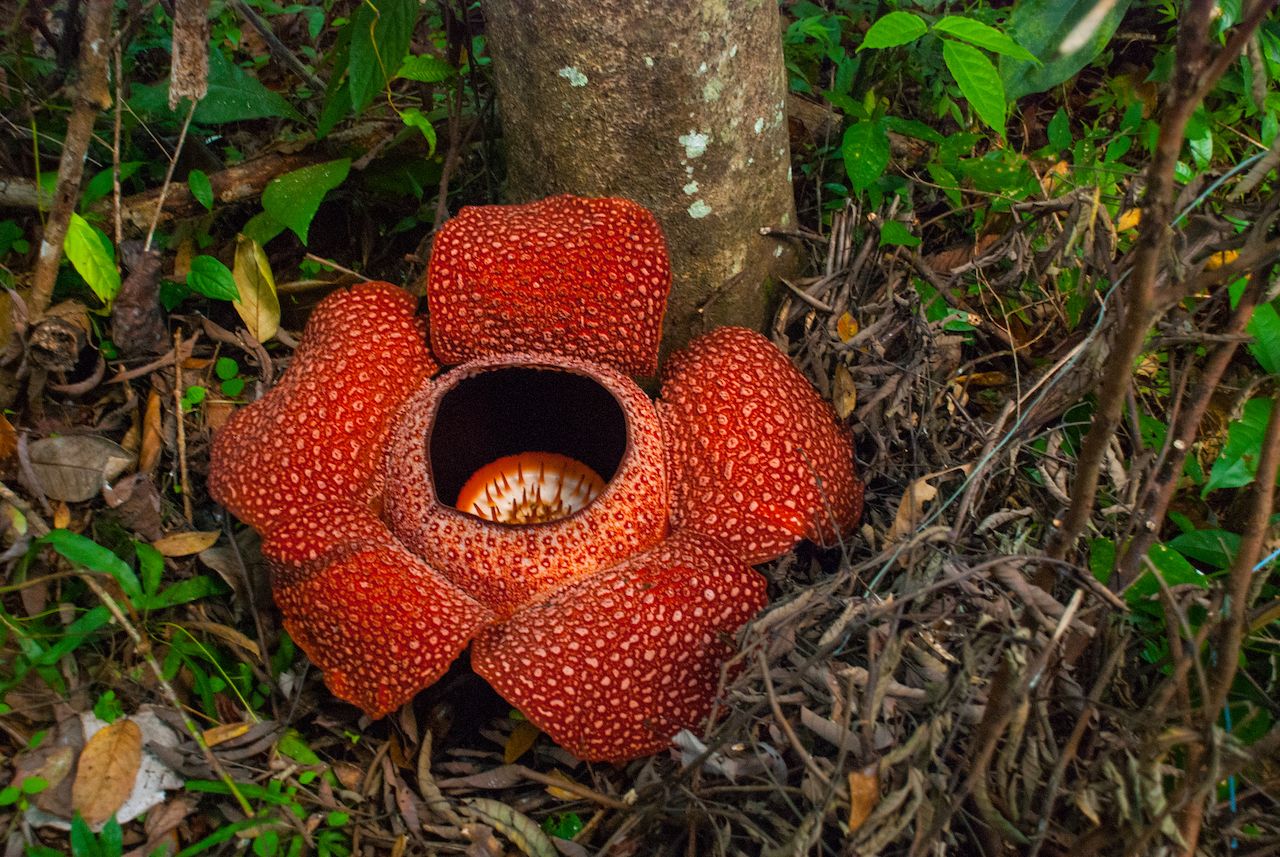 This species may not look much like the titan arum, but the two have a lot in common. Both are corpse flowers, both are native to Sumatra, and both get absolutely massive. Rafflesia arnoldii takes the title of producing the largest individual flower head in the world, spanning up to three feet in diameter. It’s a rare flower and quite special to the people of Indonesia; the island nation even declared it a national flower. 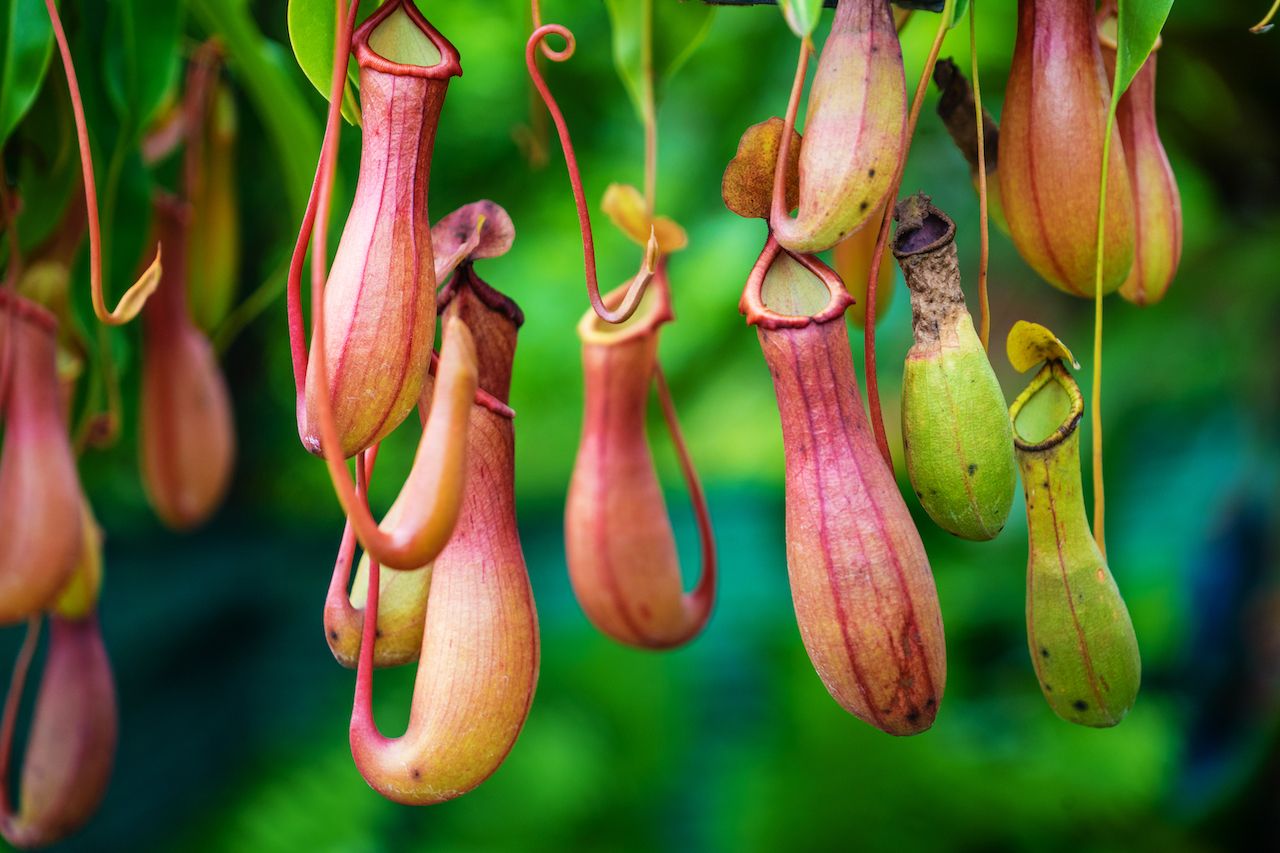 Pitcher plants are carnivorous flowers with long, deep bodies shaped like pitchers. Also known as pitfall traps, they attract prey like flies and insects with either bright interior markings or nectar that collects in their jug-like cavities. The inside of most pitcher plants is slippery, ensuring that small critters are unable to escape once inside. Various species are found around the world, though most favor tropical areas like Southeast Asia. The largest pitcher plant species, N. attenboroughii, grows up to five feet high and a foot wide on the island of Palawan in the Philippines. 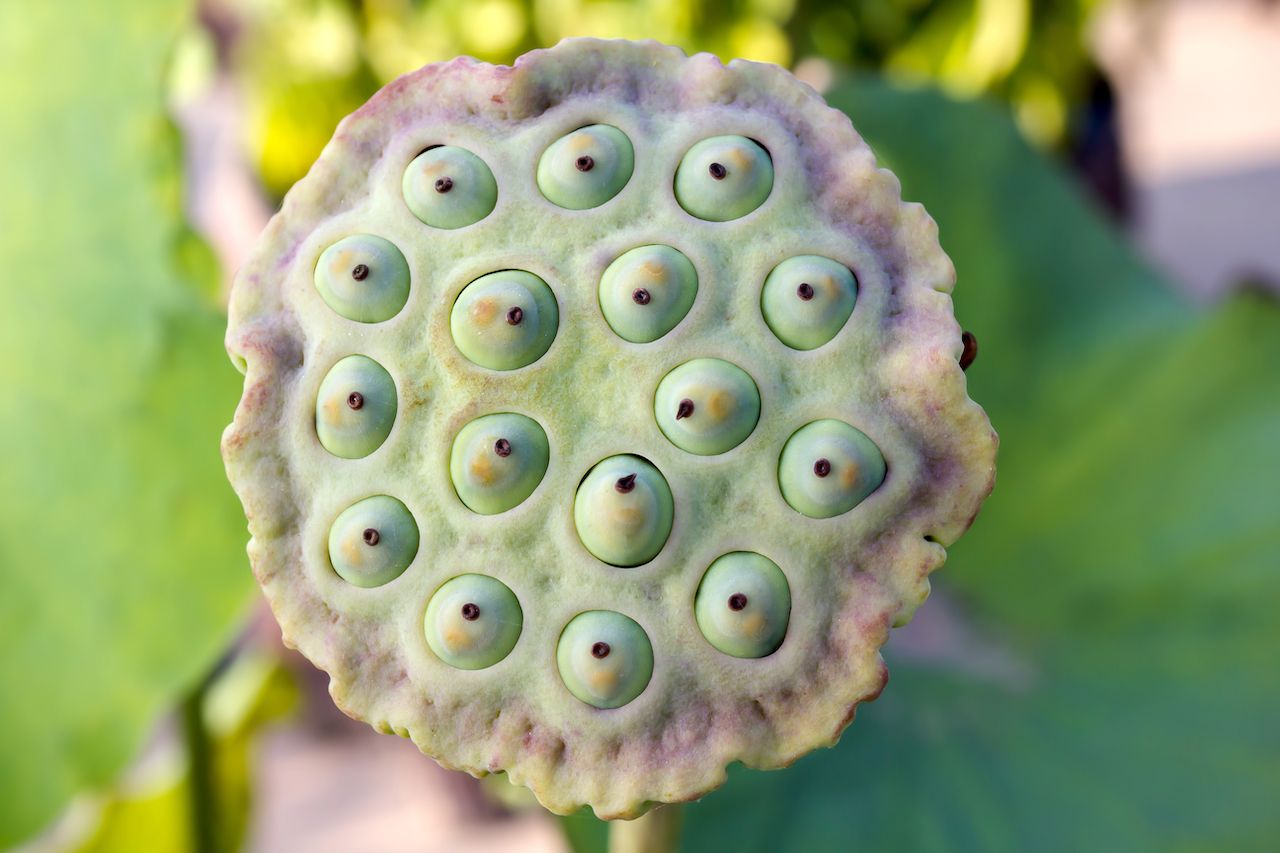 Lotus flowers are delicate, stunning, and sacred in many cultures. Lotus pods look a little bit like shower heads whose holes produce seeds rather than water; oddly, they’ve become the poster child for an unusual fear known as trypophobia, a fear of clustered holes. The lotus seeds found inside the pods have been used in a number of ways around the world, most notably as a snack food everywhere from Japan to India and as a curative agent in traditional Chinese medicine. 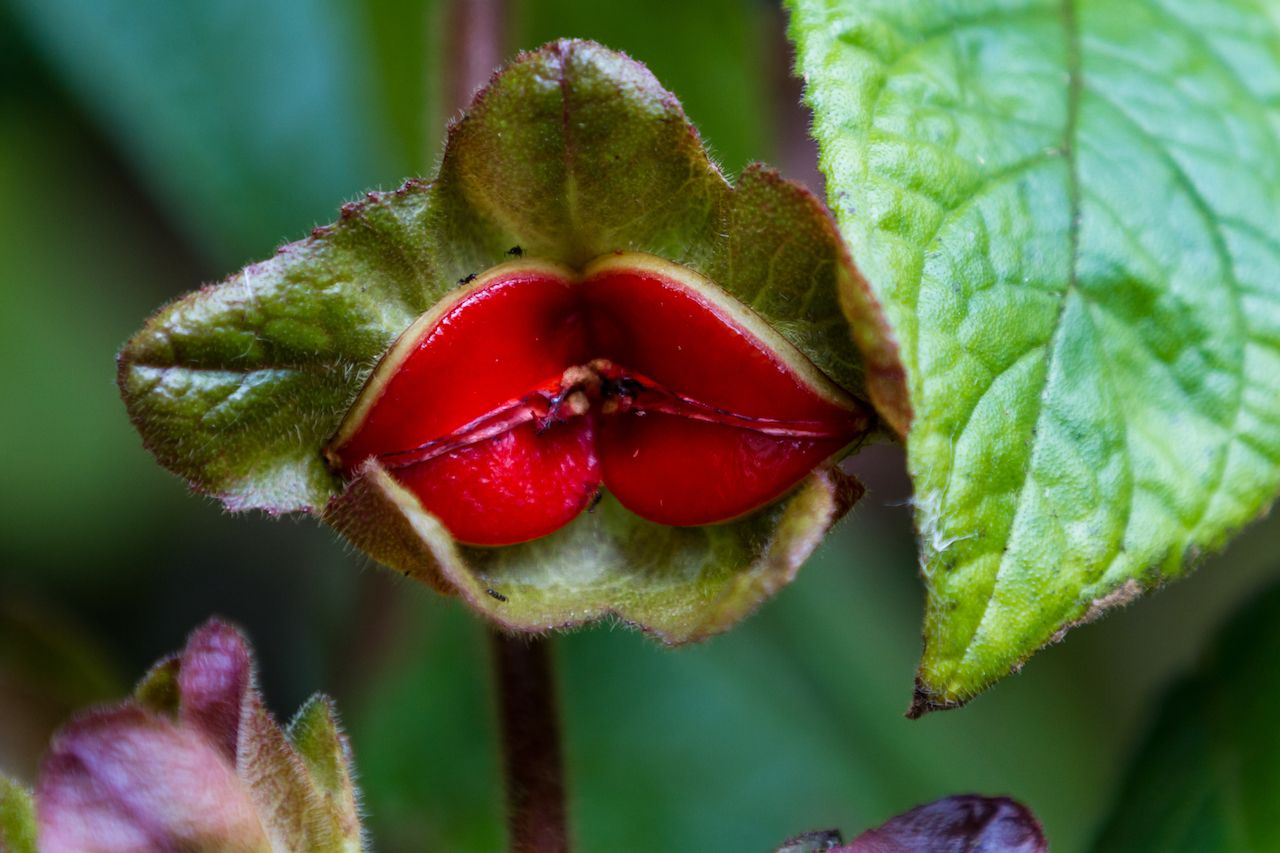 It’s easy to see how Psychotria elata got its nickname. The bright red “lips” are actually bracts, modified leaves that grow before the flower matures, while the flower itself is typically white. The tropical shrub is native to the rainforests of Central and South America, though it can survive in more temperate environments. Indigenous groups in Panama and Colombia have long sought out hooker’s lips flowers for medicinal purposes, specifically to help with labored breathing. Elsewhere, it’s believed to help with ailments like earaches and sore throats. 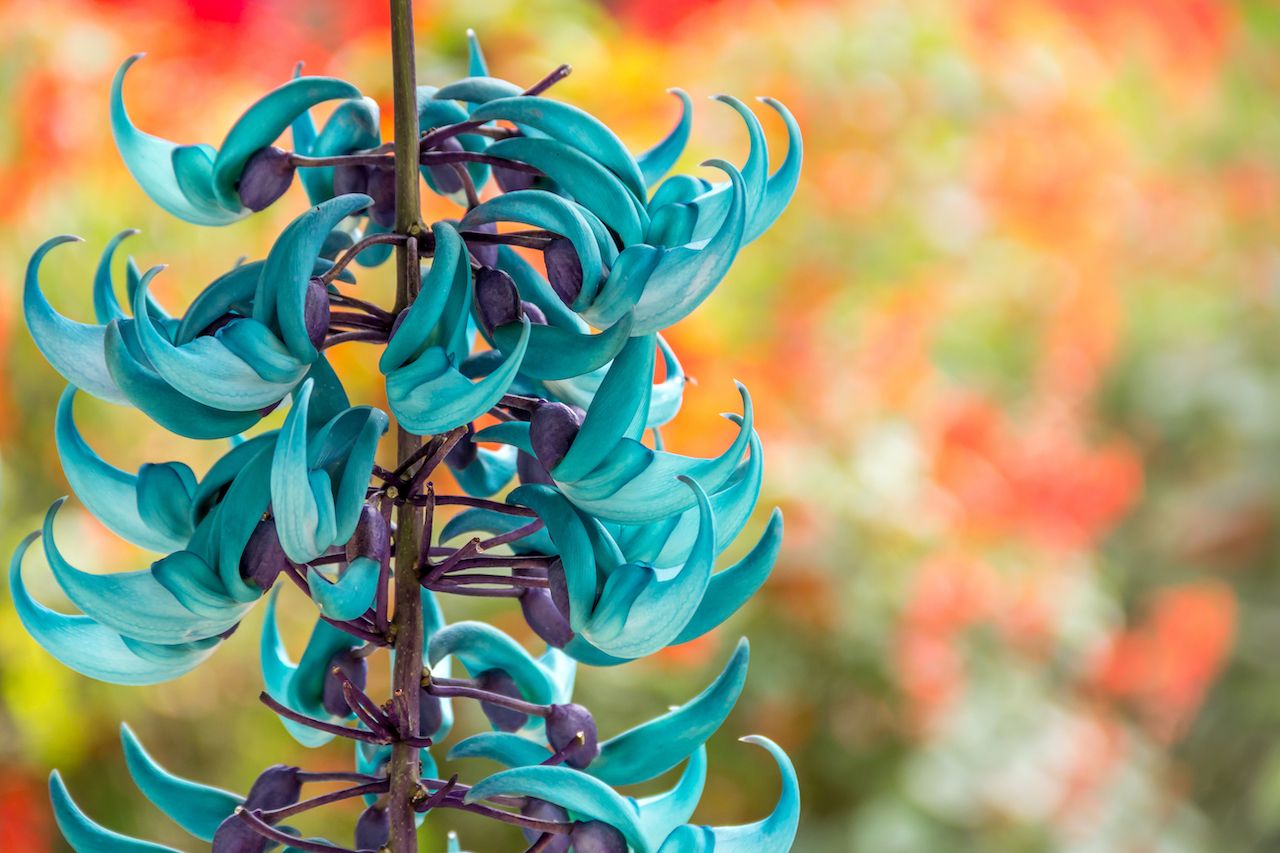 Jade vine is famous for its striking turquoise color. A relative of the kidney bean, the vine can stretch up to 70 feet; the flower trusses, which are made up of bright, claw-like blooms, can reach lengths of 10 feet themselves. Jade vine is native to the rainforests of the Philippines and known as taybak in Tagalog, the local language. The plant is often used as decoration, most often contributing to lei-like garlands, though it’s unfortunately being threatened by deforestation. 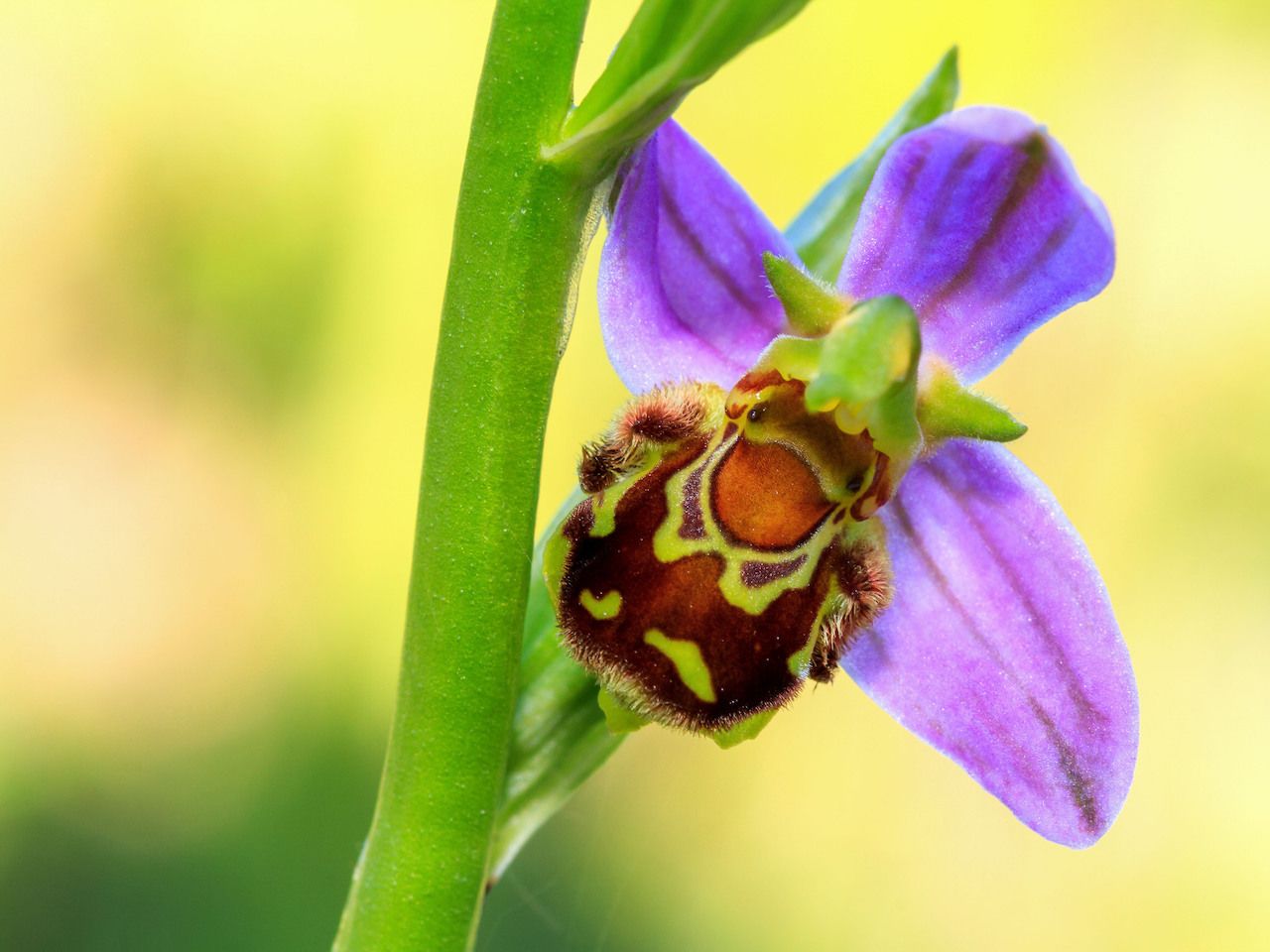 A master of disguise, Ophrys apifera is nicknamed as such because, well, it looks like a bee. It’s an evolutionary tactic known as mimicry, which this species uses to attract its primary pollinator. Bees collect pollen after landing on the flower in hopes of mating and then distribute the pollen as they fly away. Bee orchids are a common sight in Europe — though, interestingly, those found in England rely on self-pollination rather than mimicry to reproduce — as well as the Middle East and North Africa.

Food + DrinkThe 9 most fascinating fruits in the world and where to try them
Tagged
Parks + Wilderness
What did you think of this story?
Meh
Good
Awesome

Why anyone who loves waterfalls needs to plan a trip to Southern Idaho
How to hunt for mushrooms in Oregon’s coastal rainforest
If you like hiking and you like beer, Washington State is the place to be
Kenya has an elephant baby boom and a celebration to “adopt” them
The best Maldives experiences that combine luxury and wildlife