Early in the morning in Hong Kong, shops along Wing Lok Street in the Western district crank open rusty gates. The shops all have one thing in common: strings of dried fish maw and dried seafood bundled together, covering the store fronts like curtains. Inside, the walls are lined with glass jars, each filled with dried herbs and animal parts. These are Traditional Chinese Medicine shops where locals come for home remedies, and visitors come to learn about the ingredients inside.

Traditional Chinese Medicine (TCM) has been a part of Chinese culture for thousands of years. The practice focuses on healing and restoring balance in the body. The earliest record of TCM is the Huangdi neijing (The Yellow Emperor’s Inner Classic), which dates back to the third century BCE. The concepts from this time still translate today. The herbal bible of TCM, the Compendium of Materia Medica, was written in the 1500s and lists over 1,800 ingredients ranging from the common to the obscure.

It’d take a lifetime to learn all of the ingredients, but these are some of the things you’re likely to see if you get a chance to visit a store in China. 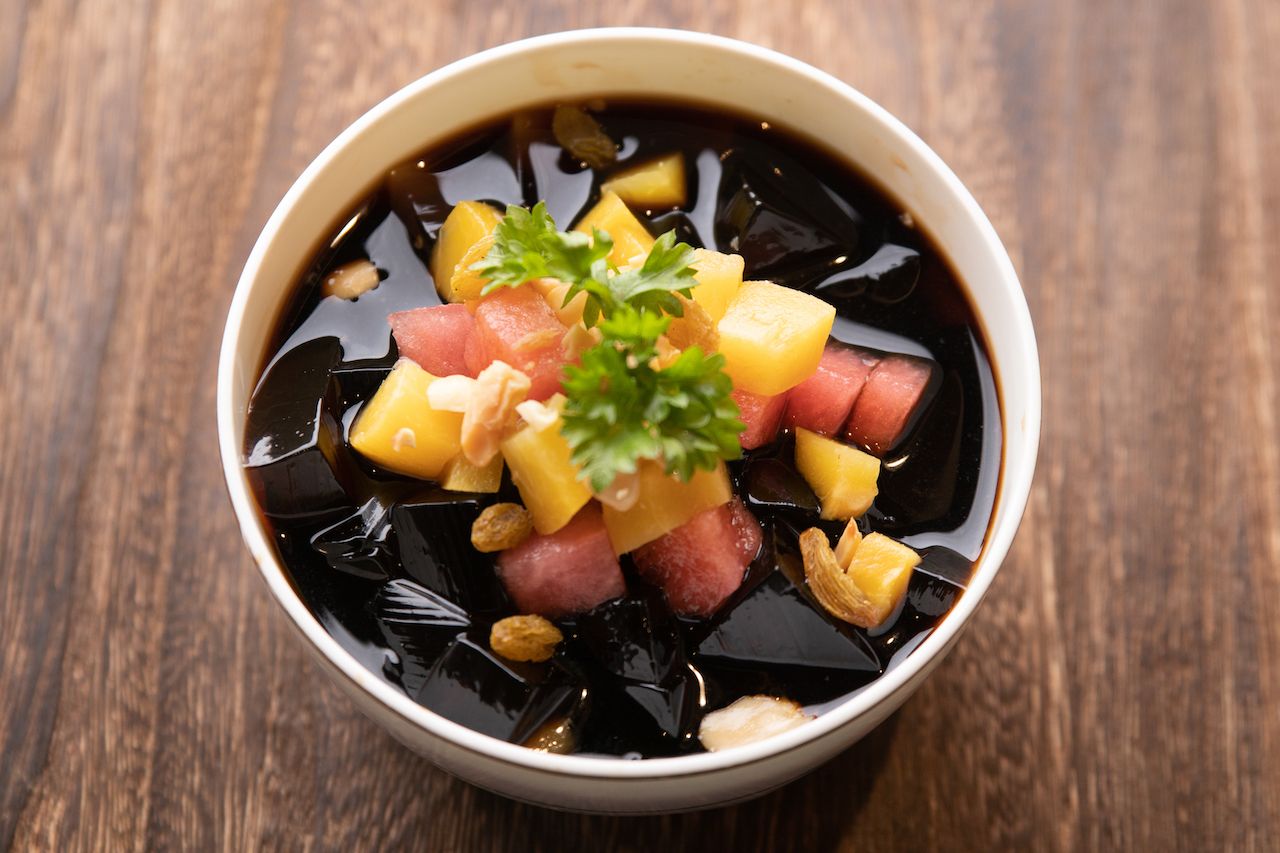 Turtles represent longevity in Chinese culture, and turtle shells are an important medicinal ingredient. Shells are harvested, boiled for hours, and then mixed with water and herbs. It’s all cooked down into a black, gelatin-like mixture said to improve skin complexions and lower cholesterol. The gelatin mixture is eaten as a jelly topped with sugar syrup or other sweet foods to mask the bitterness. You can find these ready-made jellies in herbal stores and supermarkets across Hong Kong and China. 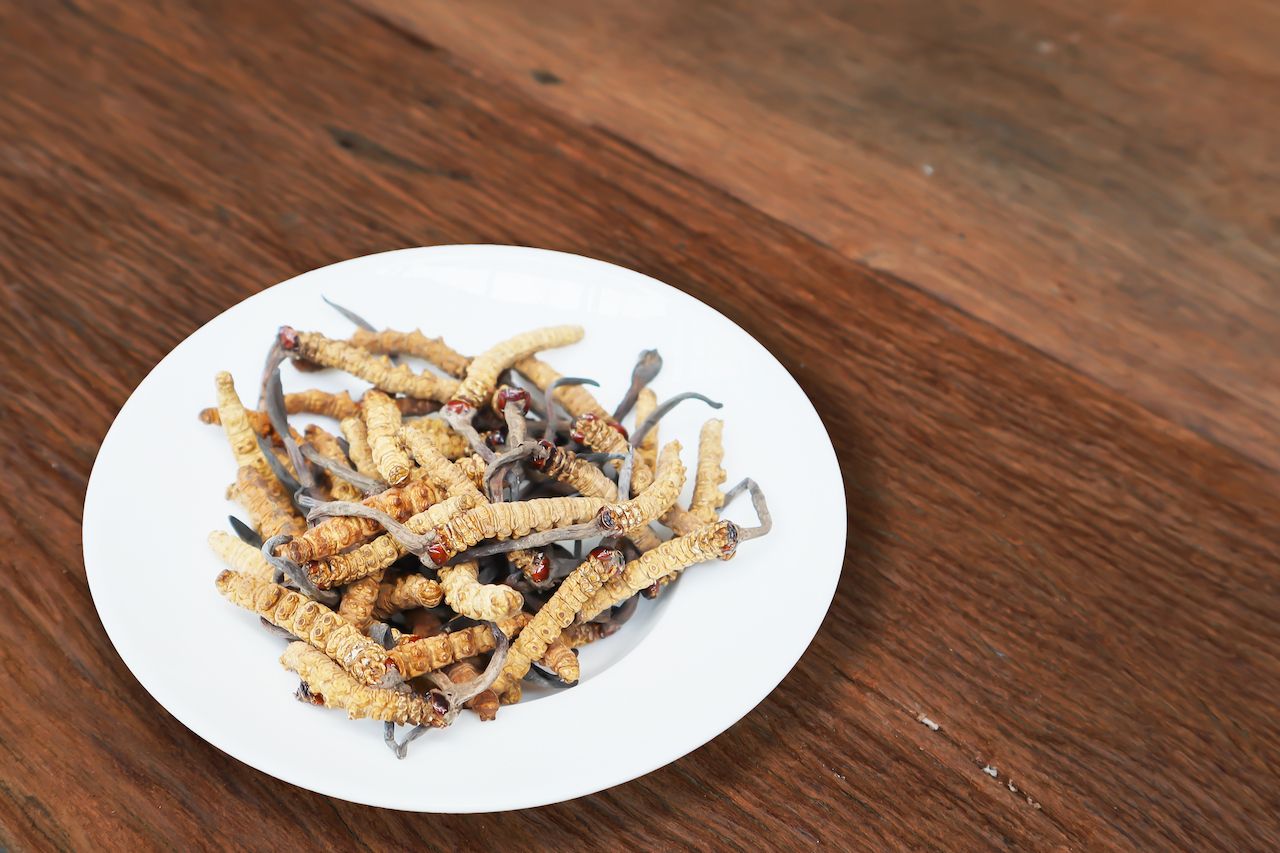 Caterpillar fungus (Ophiocordyceps sinensis) is a type of parasitic fungus that takes over the body of ghost moth larvae. It grows in the living larvae, eventually killing it and using its body for fuel to grow a short stalk. The fungus is found in the winter in the plateaus of Tibet and Northern China, where it’s hunted down by experienced collectors and sold for as much as $30,000 per kilogram. The fungus, no more than one inch long, is said to strengthen immunity and fight off cancer. You can find caterpillar fungus in soups, steamed eggs, and steamed vegetables served at high-end restaurants across the country. 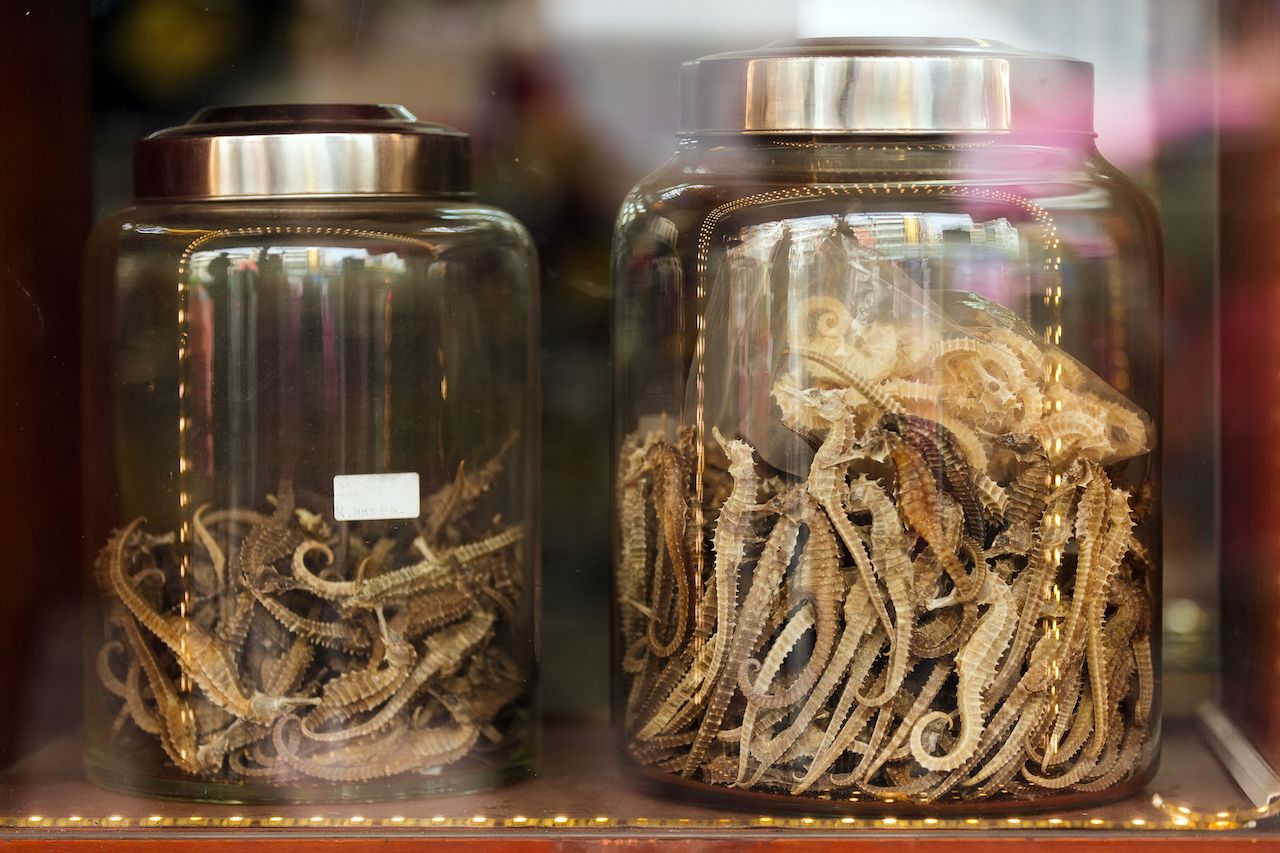 Dried seahorses are widely used in Chinese medicine, especially in Hong Kong and along the southern coast of China. It’s used in soups with boiled pears and apples as a remedy to soothe sore throats and coughs. It’s believed dried seahorses can treat kidney and respiratory diseases, but one of its most common uses is to improve blood flow in men as a natural sexual stimulant. 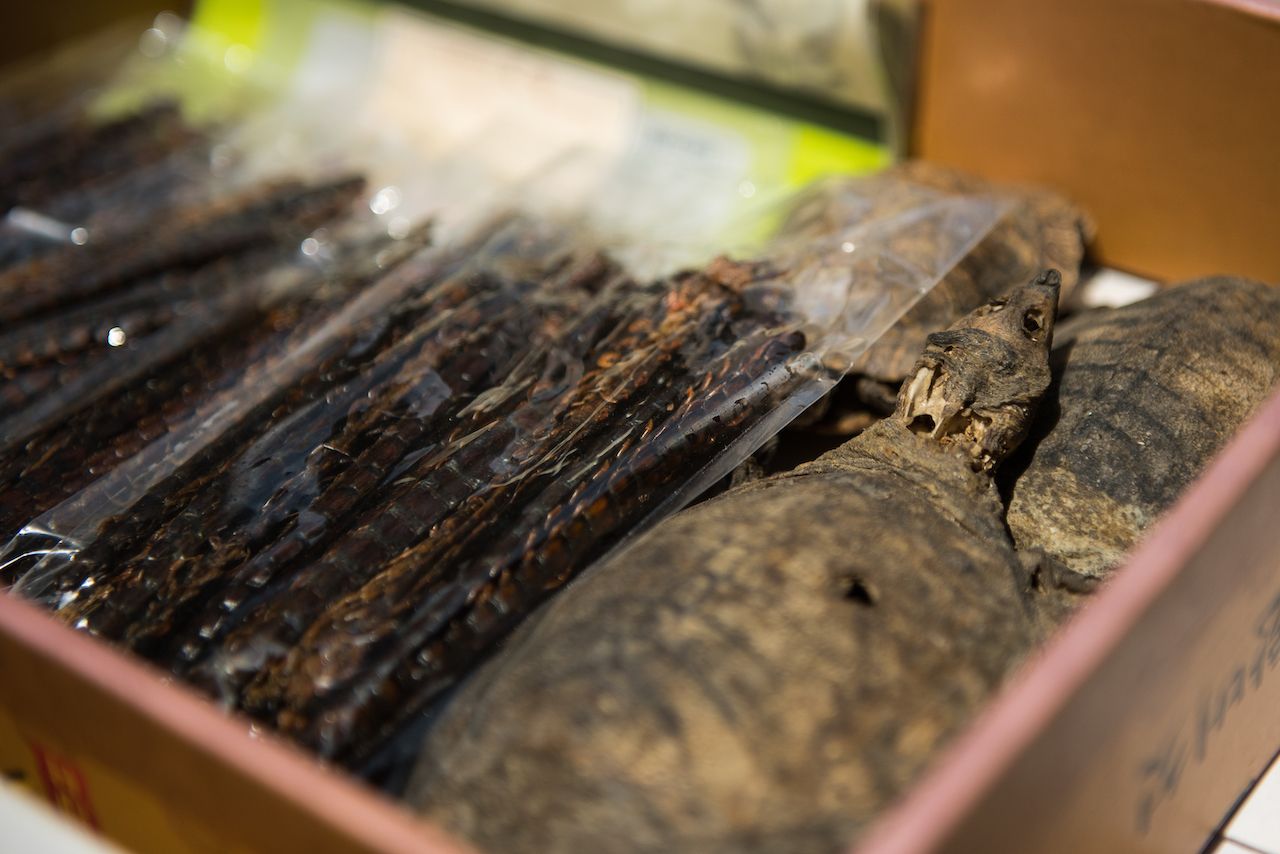 Centipedes are believed to treat a number of conditions in TCM, including alleviating pain, easing headaches, and stopping seizures. These crawlies are boiled and dried in the sun in central and eastern China. They’re usually ground into a fine powder for easier consumption. The powder or whole centipedes are often cooked in soups or put in a bottle of alcohol along with scorpions and snakes. 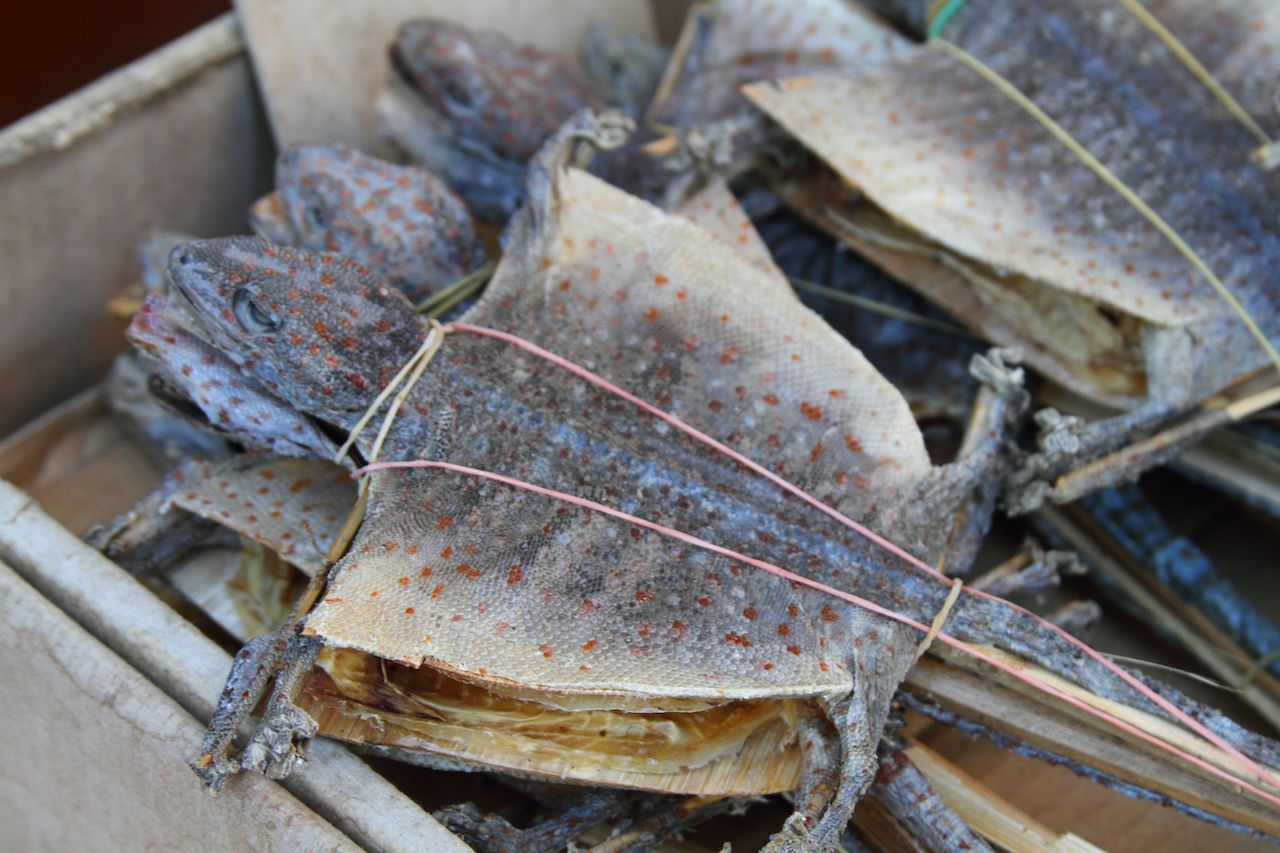 Geckos, which resemble mythical dragons, hold a special place in traditional folklore. They’re a symbol of power and good luck in China. Geckos are also used in China as a medicinal ingredient that’s believed to nourish the kidneys and lungs. Locals macerate rice liquor with herbs and dried geckos and consume the spirit. In TCM stores, you’ll find geckos sun dried with the internal organs removed and the body flattened on a stick like a bat.

Hasma, or the fatty tissue of frogs 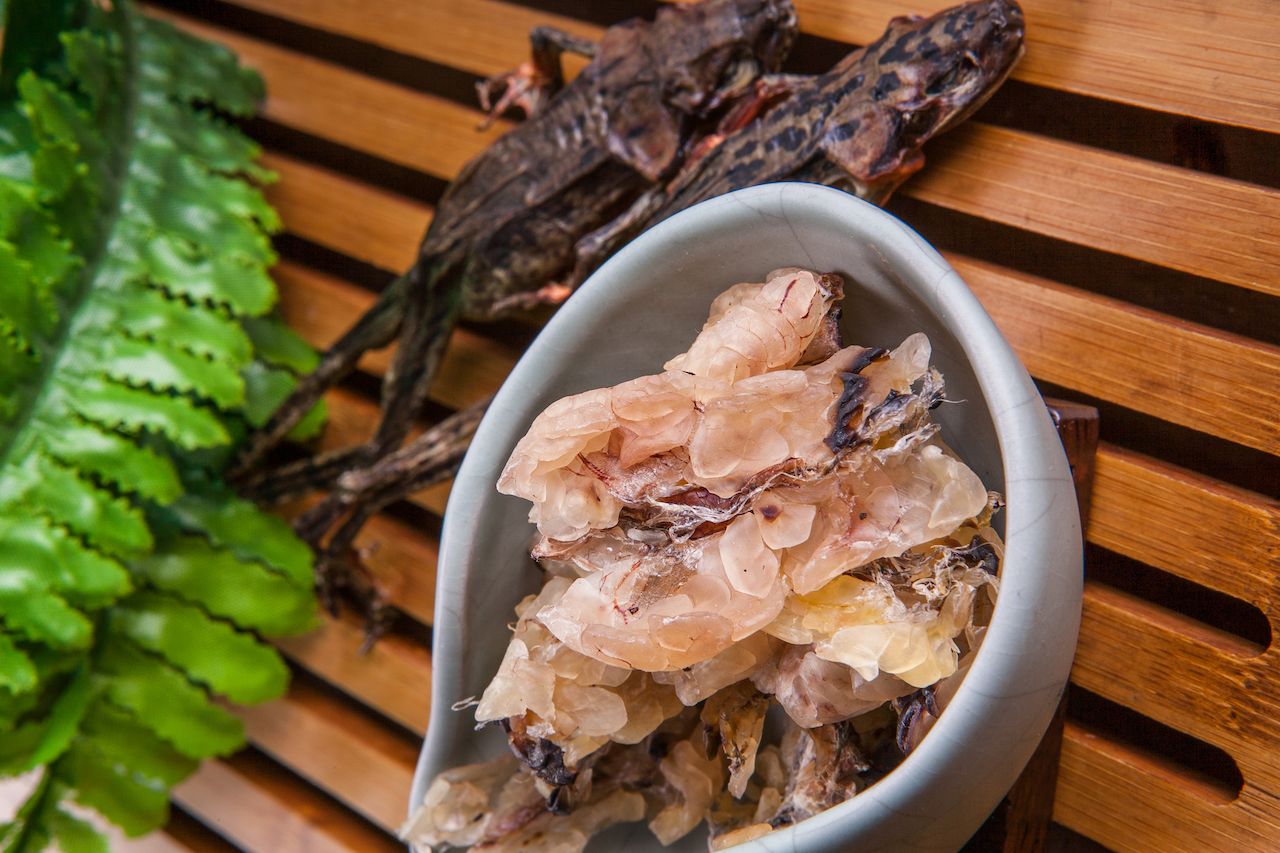 Hasma is the dried fatty tissue found near the fallopian tubes of frogs, and it’s especially prevalent in the northeastern part of China. The fatty tissue is believed to treat stomach ulcers, improve skin complexions, and provide nutrients to a woman’s reproductive system. When soaked into water, hasma becomes gelatinous. The Chinese use hasma to make sweet soups with dried plums and longan. In the south, people cook hasma with coconut milk and plenty of sugar. 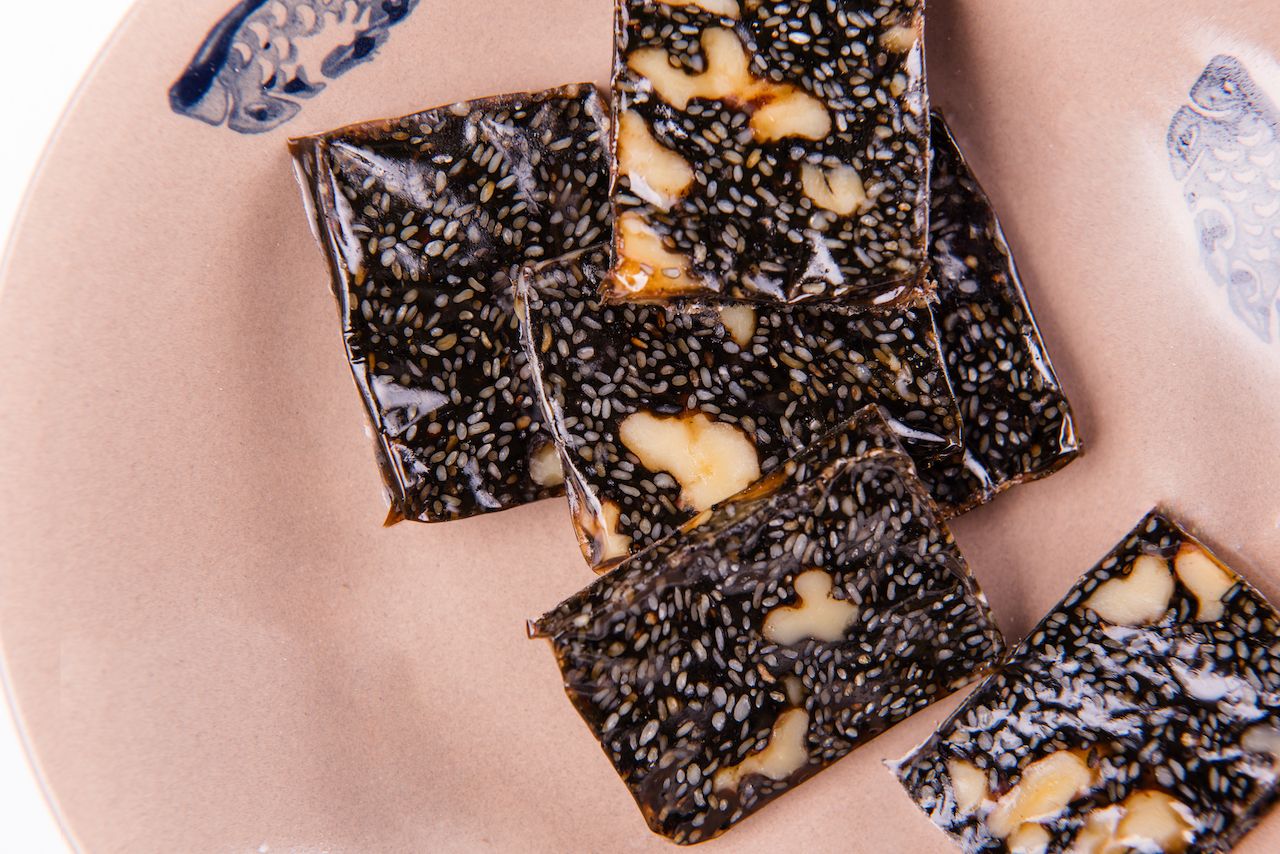 Ejiao is pan fried and steamed donkey hide, and the black gelatin looks a bit like a piece of soft plastic. It’s believed to heal a number of diseases, including internal bleeding, anemia, and dizziness. To consume it, the gelatin is melted in hot water and mixed with honey as a healing drink. In central and eastern China, locals make rectangular candies with ejiao, almonds, sesame, and sugar.

Food + DrinkNaxi Cuisine Is the Chinese Food You’ve Been Missing Out On
Tagged
Food + Drink Wellness China Beijing, China
What did you think of this story?
Meh
Good
Awesome