Iowa may be relatively flat with less than 1,000 feet between the state’s lowest and highest points, but it’s proof that uphill hiking isn’t the only thing to do at a state park.

The best state parks in Iowa offer a range of activities, from camping to horseback riding to spelunking and birdwatching. Because the state has four distinct seasons, visitors can have a totally different experience depending on when they visit. Come winter, visitors can snowshoe across the same beaches where they work on their tans in August.

The state has roughly 53,000 acres protected as park and recreation land across 83 sites. The parks system averages roughly 12 million visitors per year, so these aren’t just your average neighborhood parks. More than 40 of these Iowa state parks have developed and maintained nature trails, and 41 of the recreation sites are next to lakes — 24 natural, 17 human-made. And in case you’re wondering: yes, the Iowa parks system does an excellent job of sharing fun statistics online.

Because Iowa is relatively flat, it’s not hard to drive just about anywhere in the state. Visitors can take the highway and make great time, or opt for a slower country road past farmland for more of the classic midwest experience. Most of the best state parks in Iowa below are near fairly major roads, so it shouldn’t be too hard to get anywhere in the state. 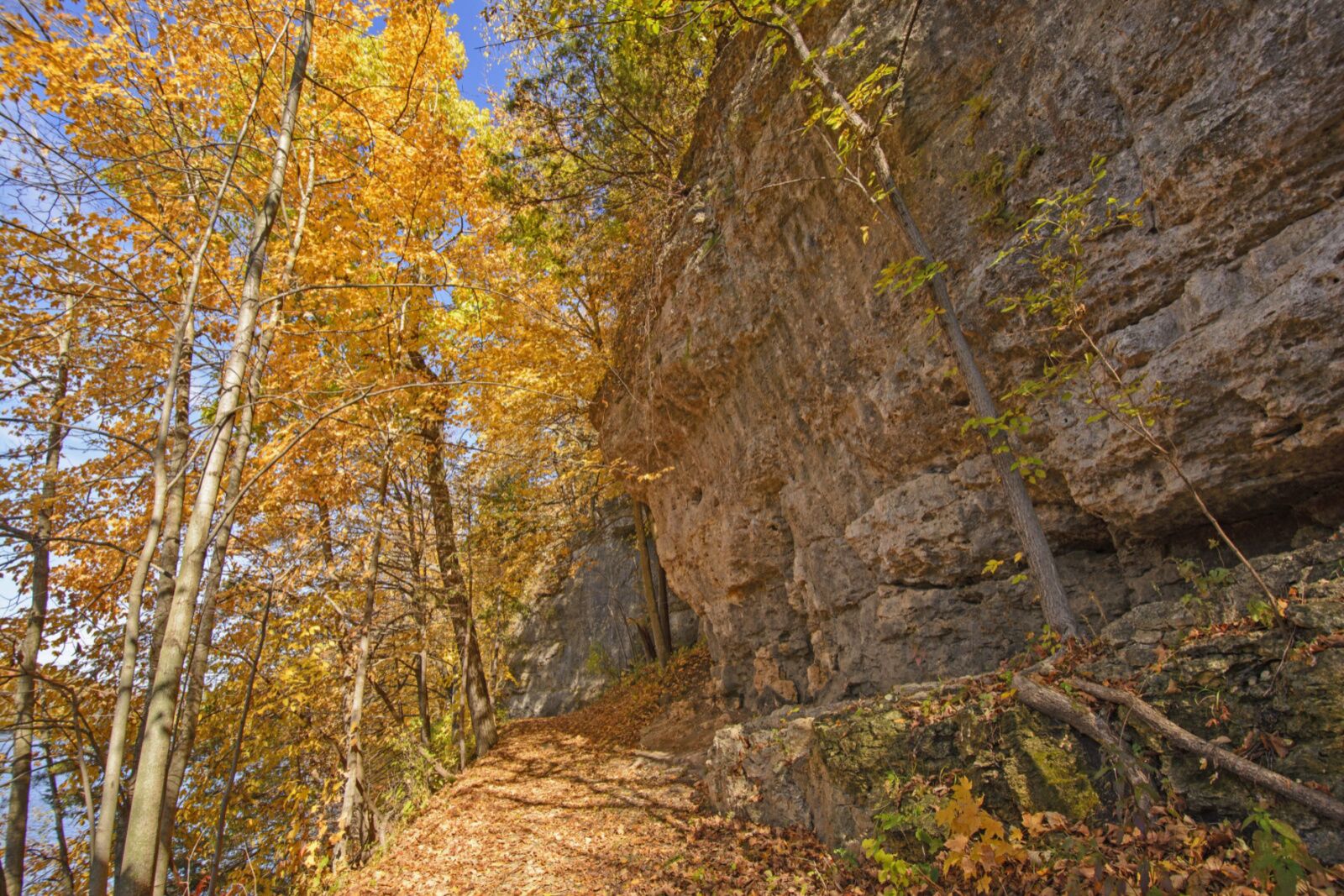 The park was originally named “Devil’s Backbone” for the steep and narrow ridgeline carved by the Maquoketa River. It might not match the drama of the Half Dome cable in Yosemite National Park, but traversing the ridgeline is still one of the more popular hikes in the Midwest. There’s also mountain bike on a few dedicated trails.

There are two campgrounds and 16 cabins ranging from deluxe rentals to two-bedroom sprawlers. It’s one of the best Iowa state parks to spend a weekend, so consider booking an overnight rather than doing just a day trip. 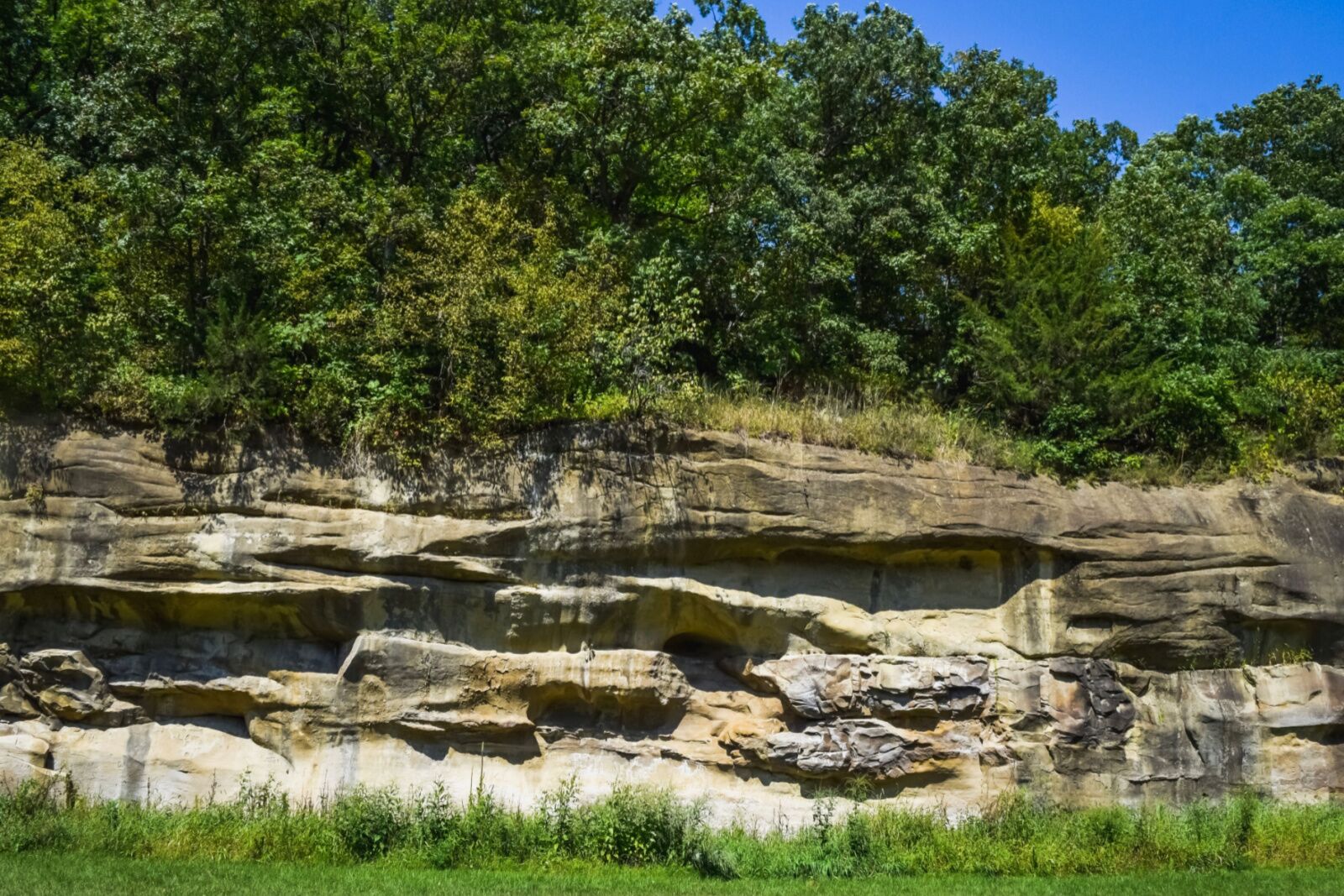 Four miles of undulating trails wind through this park, leading to overlooks of the Des Moines River and the surprisingly impressive Pea’s Creek Canyon. It’s in Iowa, but this place feels like it has some notable elevation gain.

When driving into the park, visitors will pass a shaded campground before descending a winding road to Pea’s Creek. After passing the park’s iconic stone bridges, they’ll reach the canyon walls. Called ledges, they rise 100 feet above the creek bed and are more than 300 million years old. Erosion from melting glaciers cut through the sandstone to create the cliffs and valleys roughly 13,000 years ago.

Hiking in this area is challenging compared to the rest of the state. However, the Lost Lake trail is a good choice for a very gentle walk through the prettiest areas of the park as it’s mostly smooth and level. Take time to find the rock platform overlooking the Des Moines River before finishing the walk to reach Lost Lake. 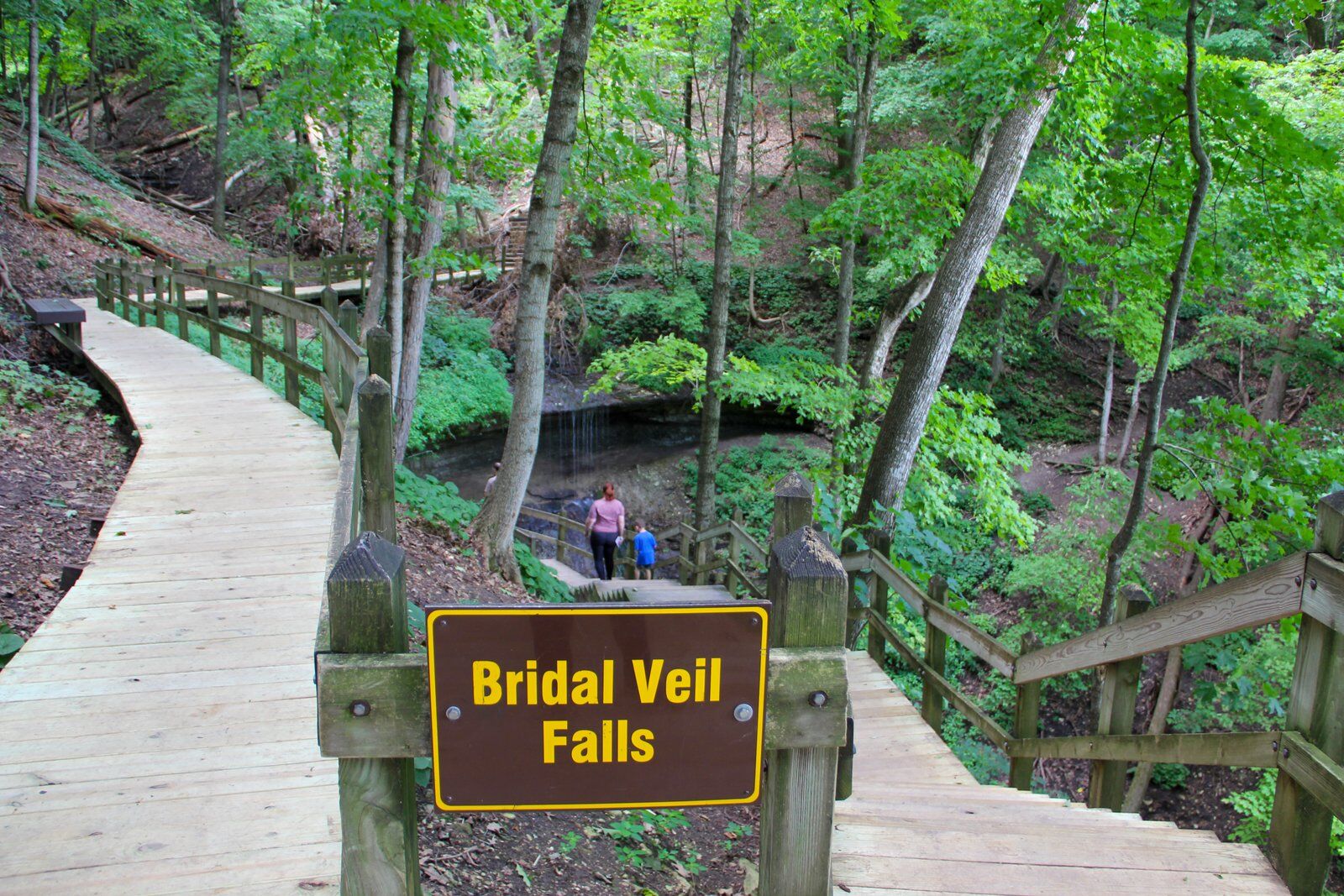 Ask anyone from the state where the best scenic views are, and they’ll probably say Pike’s Peak State Park. In 1805, Zebulon Pike explored the Mississippi Valley looking for sites that would make good military outposts, and this was his top pick. Clearly, Pike made it to a few places before most other explorers since Colorado’s Pike’s Peak is also named in his honor.

The overlooks in the park have spectacular views of the Mississippi River, the town of McGregor, and the suspension bridge between Iowa and Wisconsin. Hiking trails in Pike’s Peak State Park pass sheer limestone walls and offer the best access to Bridal Veil Falls. Visitors can camp at the park’s campground after a day of hiking before stopping at nearby Effigy Mounds National Monument or Yellow River State Forest on the way home. 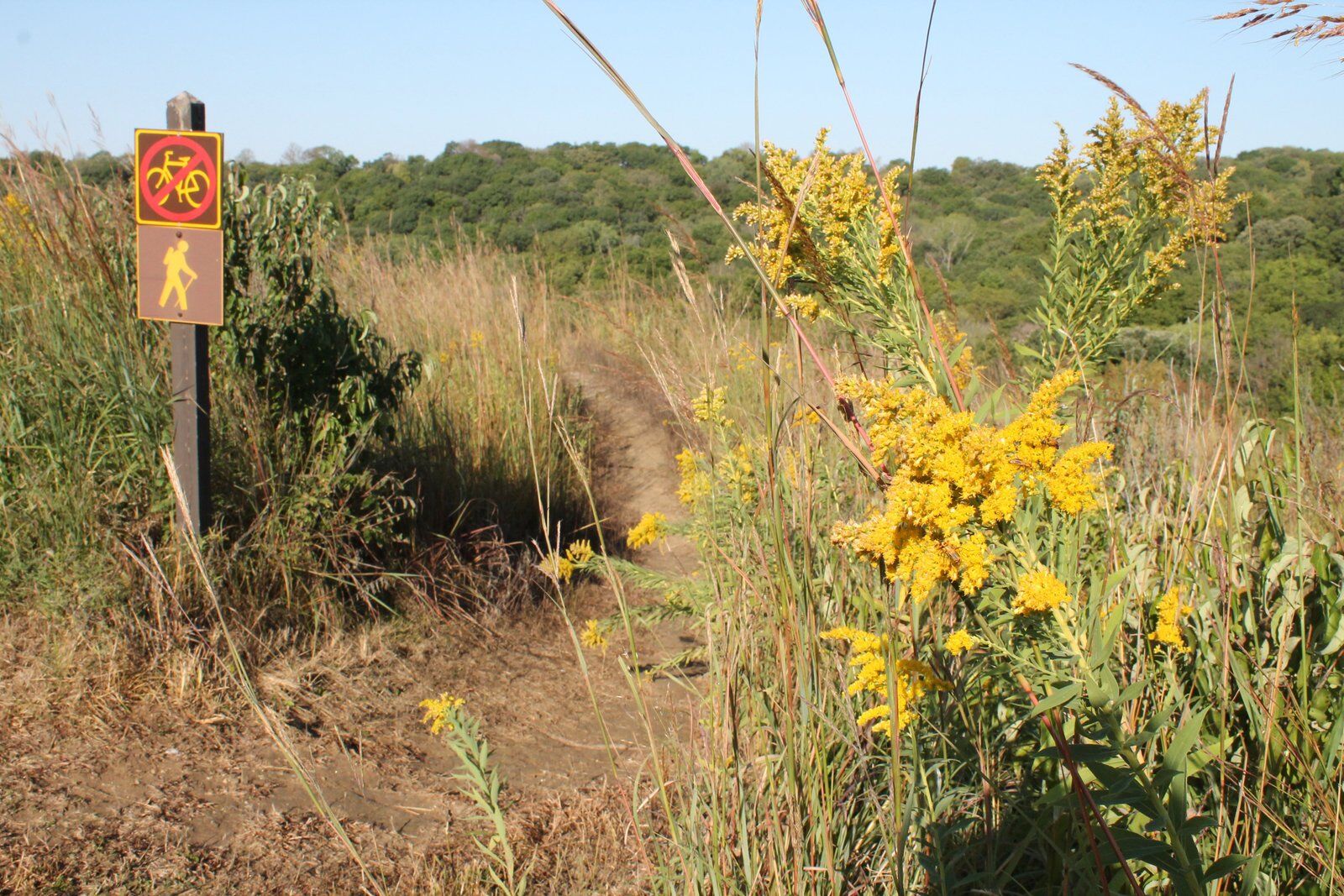 The southwest Iowa counterpart to Pike’s Peak, Waubonsie State Park is in the scenic Loess (pronounced “less”) Hills. It’s one of the best state parks in Iowa for amazing views as trails overlooking the countryside and Missouri River — it’s one of the prettiest parts of western Iowa. Waubonsie State Park is also on the multi-state Lewis and Clark National Historic Trail.

Unique to this park is an equestrian campground with 32 campsites and a separate trail for the horses. The trails for both hiking and horseback riding are equally scenic, winding down ridges into valleys and gorges. Don’t miss this one. 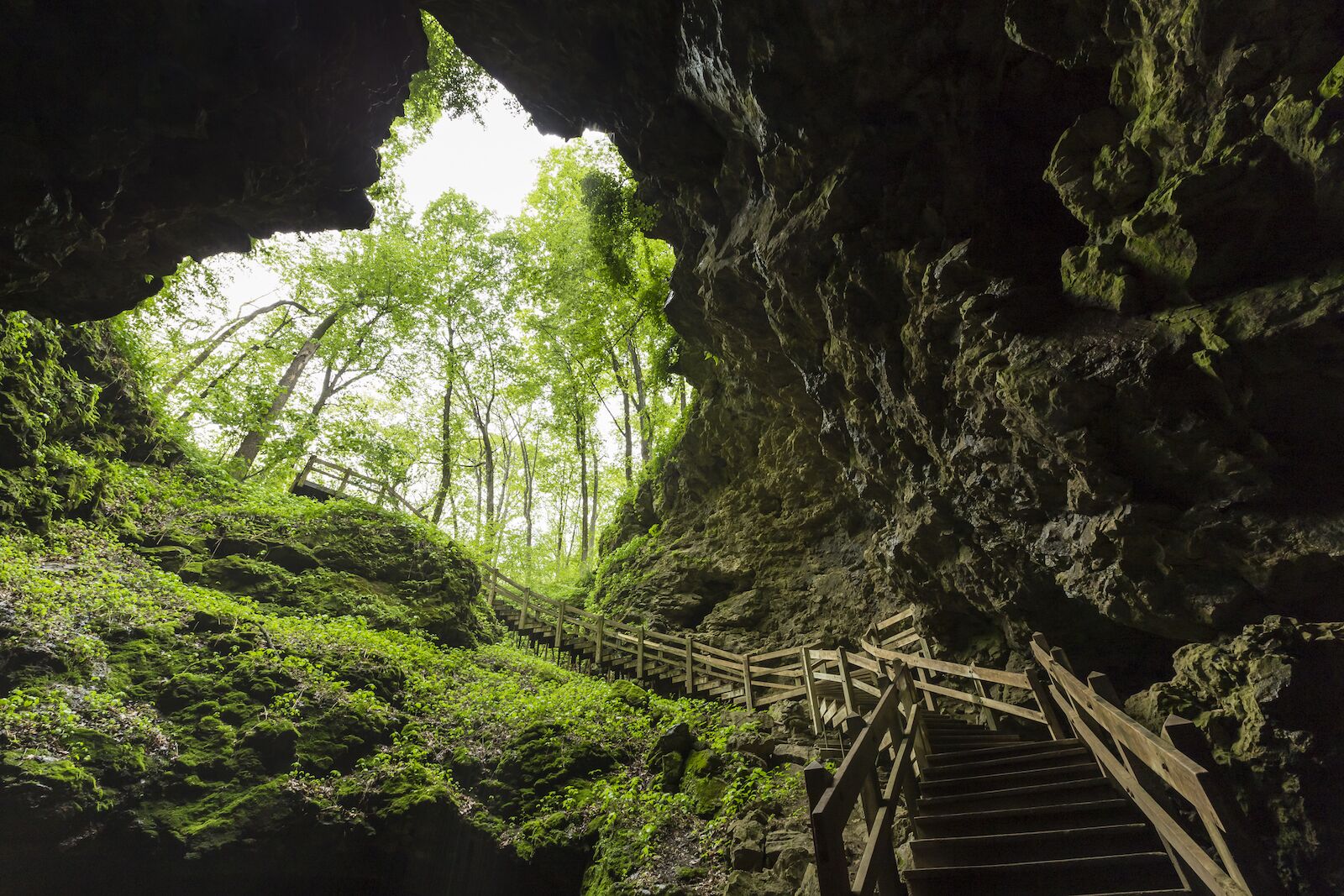 With 16 explorable caves, hiking trails running beneath a “Natural Bridge,” a 17-ton “Balanced Rock,” and paths winding through limestone bluffs, Maquoketa Caves State Park can offer as much adventure as you’d like.

Not surprisingly, the caves are the star attraction at this park. It’s fairly easy to walk into the 1,100-foot-long Dancehall Cave and larger caves like Rainy Day Cave and Ice Cave, but visitors will have to crawl into some of the smaller ones. Kids will especially love this area.

Most of the hiking trails have wooden walkways, making them beautiful and accessible year-round, even after heavy rain. The park also has a campground with 29 sites, a stone picnic area with views of the valley, and an Interpretive Center. Visitors planning on serious cave exploration should bring a flashlight. 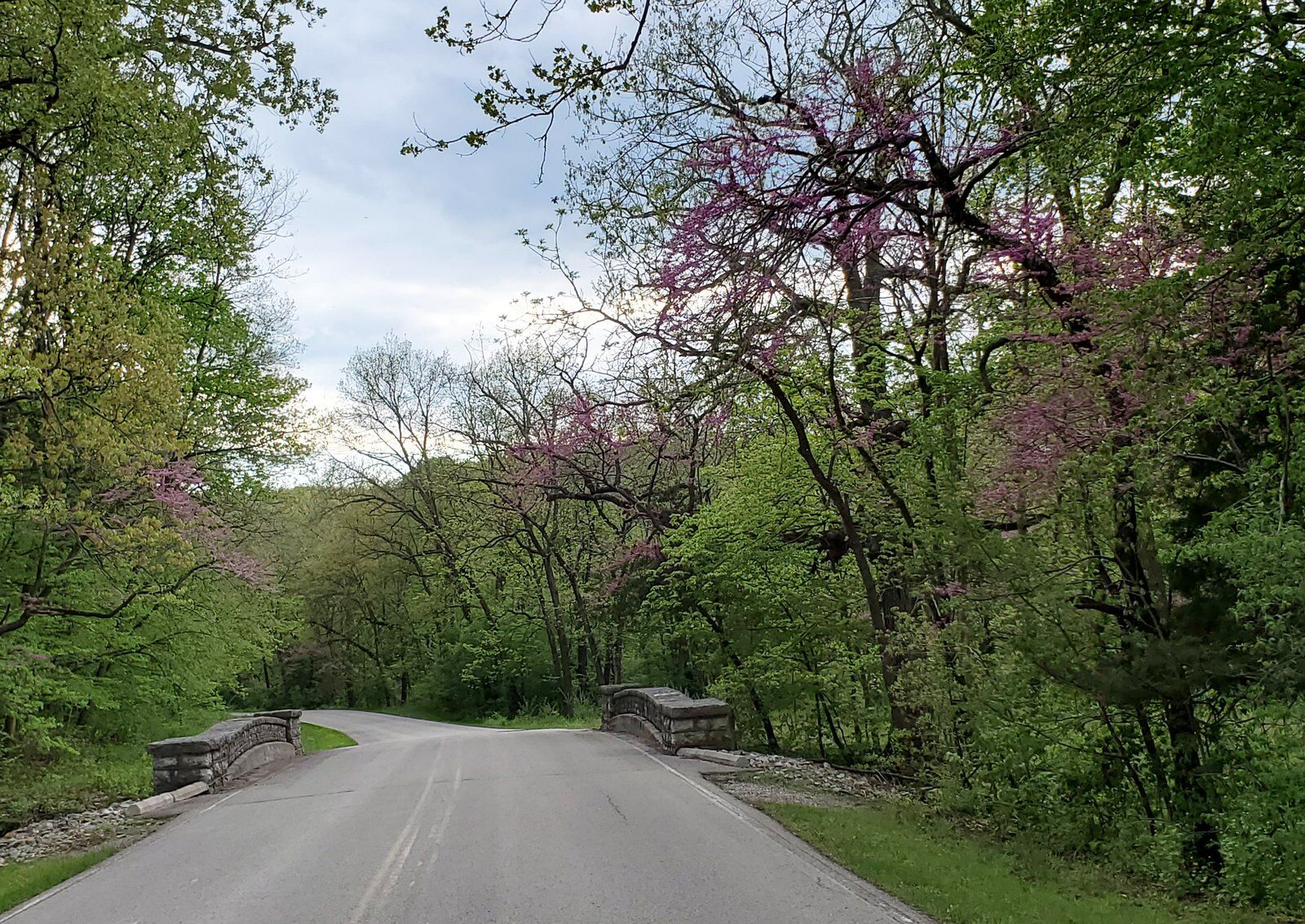 Lacey Keosaqua State Park is part of the Mormon Pioneer Trail and the largest state park in Iowa at 1,653 acres. But what most people talk about is the fact that it’s probably the most beautiful state park in Iowa. w

There are six cabins and 76 campsites, a 30-acre lake with a beach, two lodges, and two picnic shelters. It’s one of the most popular spots for fishing in Iowa, especially since it’s pleasant to sit on the comfortable pier and enjoy the views even if the fish aren’t biting. 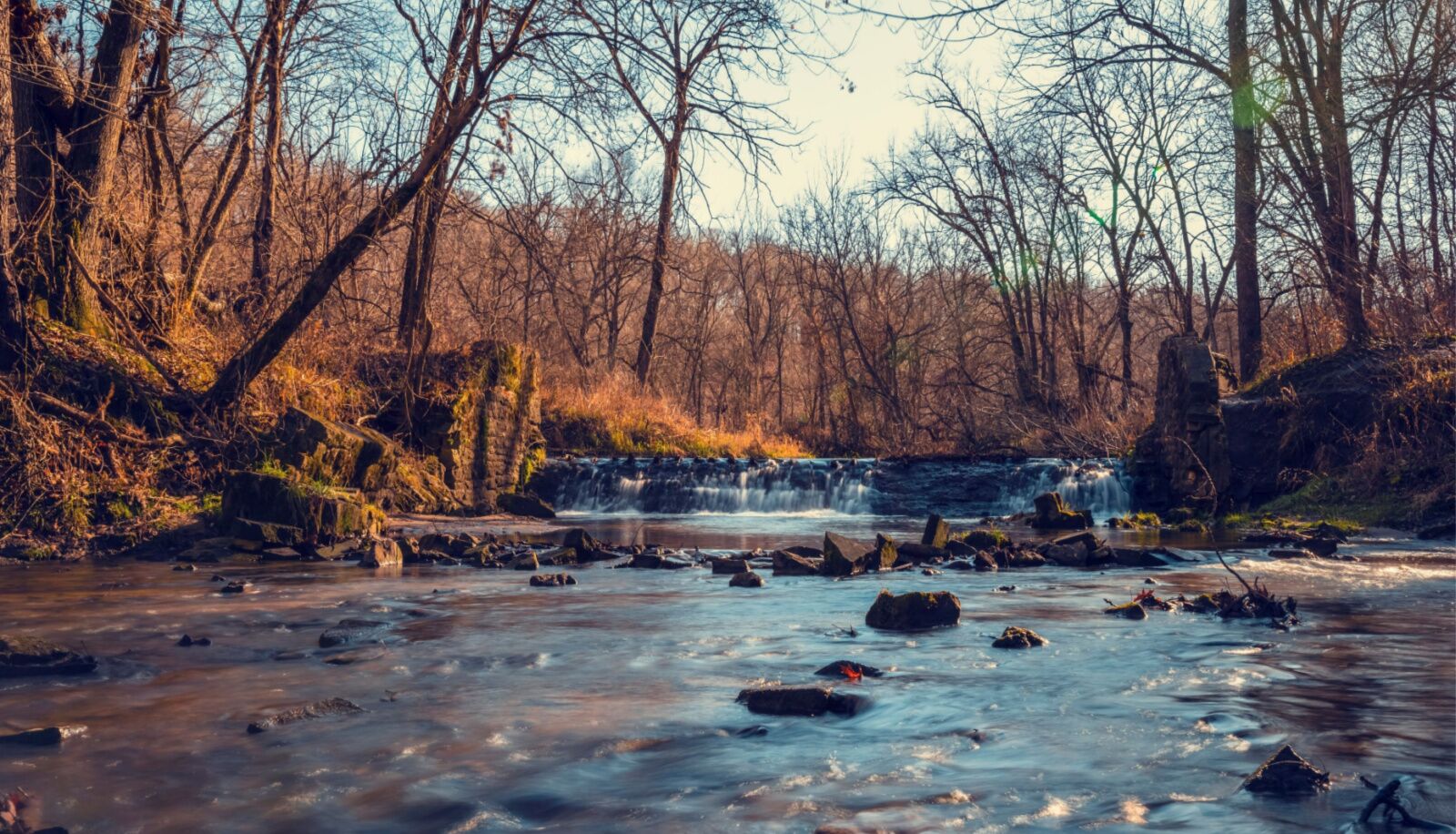 One of the best state parks in Iowa near a major city, Palisades-Kepler is a few miles from Cedar Rapids and gets a lot of visitors. The rolling hills and valleys are beautiful any time of year but especially in autumn when visitors come to photograph the foliage. It’s also very popular with visitors as a site for high school senior portraits and family photos. The odds are that on any hike, you’ll run into a professional camera or two.

Once in the park, a long, scenic drive leads to the Cedar River. Most hiking trails are on the river bluffs, which offer pretty places to stop at WWII-era stone gazebos and scenic overlooks.

Fossil-buffs also enjoy this park thanks to the many fossils in the sandbar near the Cool Hollow Trail parking lot. Just a few years ago, a visitor found a Mammoth tooth, so there’s no telling what someone could find. 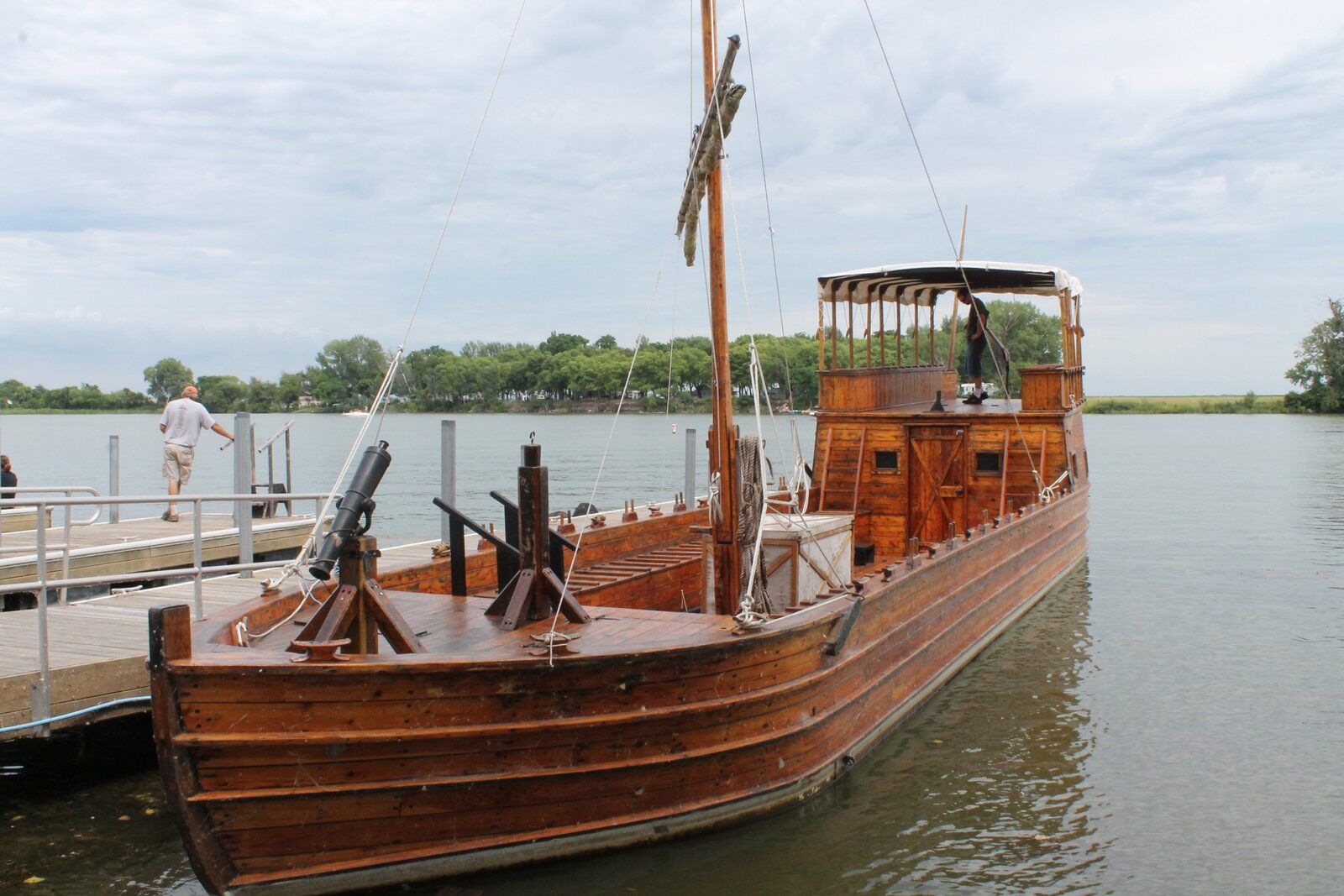 Ever wondered what it would have been like to be part of the Lewis and Clark expedition as it traversed America’s frontier? Well, then head to Lewis and Clark State Park, which marks the spot where the expedition stopped on August 10, 1804. Visitors can stand on an exact replica of the group’s keelboat and walk through the museum at the visitor’s center, open spring through fall.

The park is 40 miles south of Sioux City and is on 250-acre Blue Lake, highly regarded for excellent fishing and swimming. 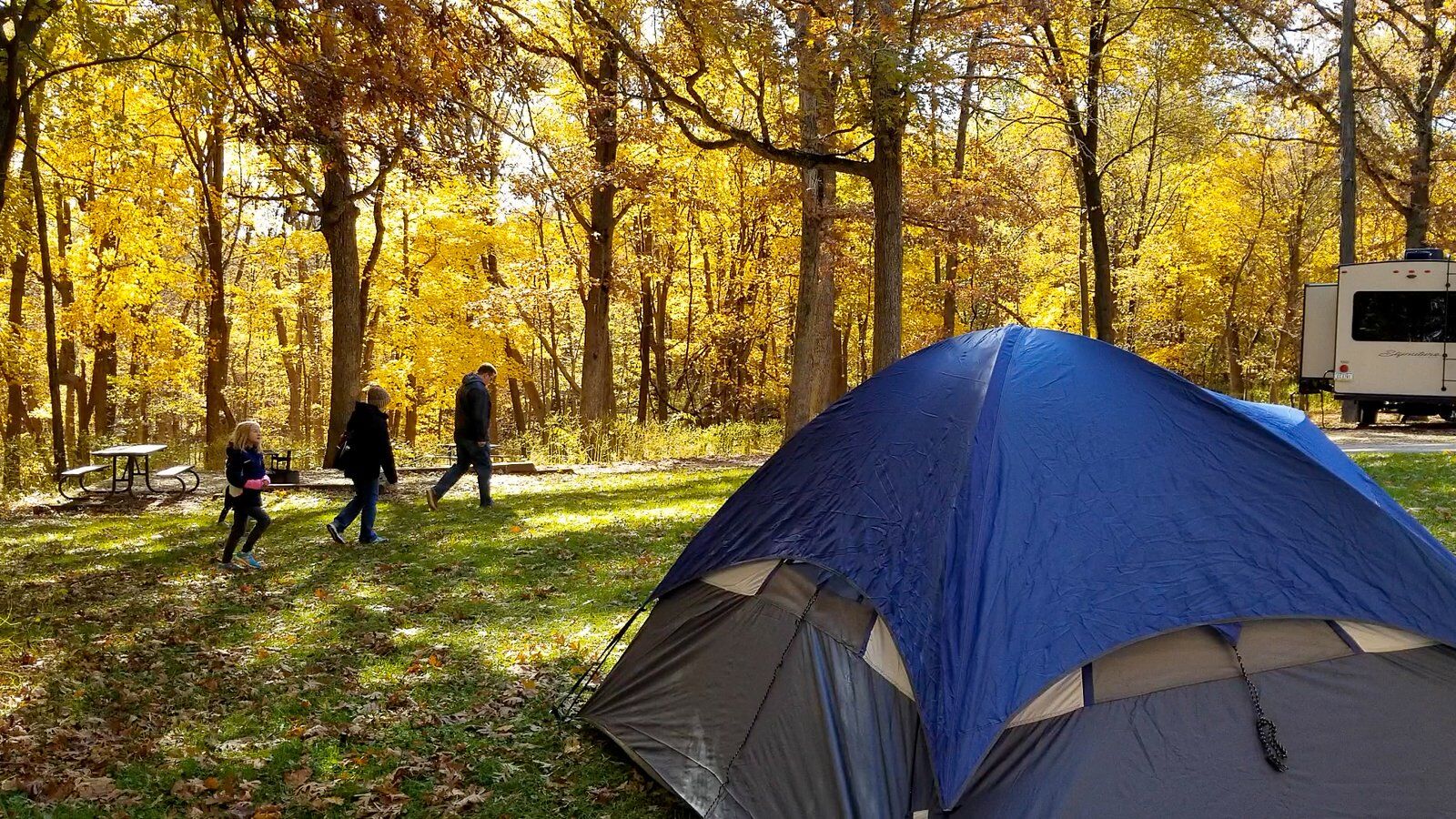 Of the 83 sites managed by the Iowa parks service, 62 of those sites have campgrounds. And with more than 5,000 campsites total, guests never have to worry about being able to find a spot to pitch a tent. But non-campers will be happy to know that 18 Iowa state parks have on-site lodges, including the Honey Creek Lodge (at Honey Creek State Park), which has a small indoor waterpark families with kids will appreciate having as a backup option on a rainy day.

Visitors can also rent individual cabins in 20 Iowa state parks. Backbone State Park and Black Hawk State Park have deluxe family cabins, Springbrook State Park has a 12-person cabin, yurts are available at McIntosh Woods State Park, and more rustic cabins with fire pits are available at Iowa state parks like Green Valley, Lake Darling, and Waubonsie. The Iowa Department of Natural Resources has a fantastic webpage laying out the details and process for renting each.

Why Grinnell, Iowa, Is the Most Badass Town in the Midwest

How To Piss Off Someone From Iowa

20 Differences Between a Normal Friend and an Iowa Friend

9 Abilities Iowans Have Over Everyone Else

18 Questions Only an Iowan Can Answer

13 Signs You Were Born and Raised in Cedar Valley

Pella, IA, Is a Little Slice of the Netherlands Right Here in the US