If you’ve only seen Iowa from the highway, an airplane window, or heard stories based on the farms and fields, you might approach this list with skepticism. You certainly won’t be expecting to read about limestone and dolomite ridges, red rocks and sea caves, world-class cycling trails, dense forests, and hilly, glacial terrain.

But, naturally, you are. This is just the start of a long inventory of uncrowded, uncommon outdoor adventures in the state, but it’ll give you a taste of what Iowa is hiding off the beaten path.

1. Hiking the bony spine of a devil 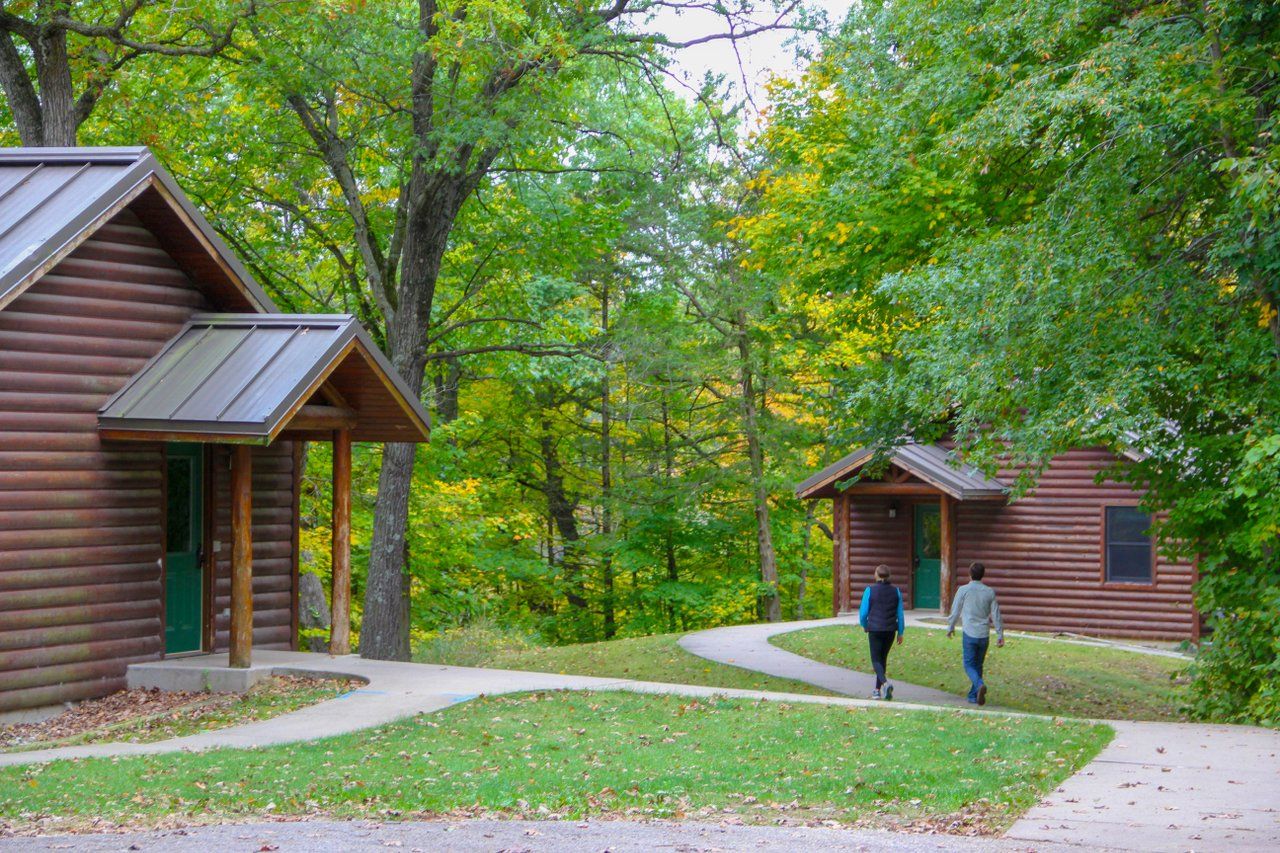 A narrow dolomite ridge carved out by the Maquoketa River has claimed the moniker Devil’s Backbone, the highlight of Backbone State Park, Iowa’s first. Twenty-one miles of trails — including along the ridge itself — make this spot a hiker’s church, paths meandering between stands of white pine, black oak, and ironwood, up forested slopes and craggy bluffs, and right along the water.

But there’s one other way Backbone State Park shines: its cabins. A CCC-era park, it holds a smattering of one- and two-bedroom cabins inside its borders, rustic yet with all the amenities. They’re often fully booked up, so make your reservations early. 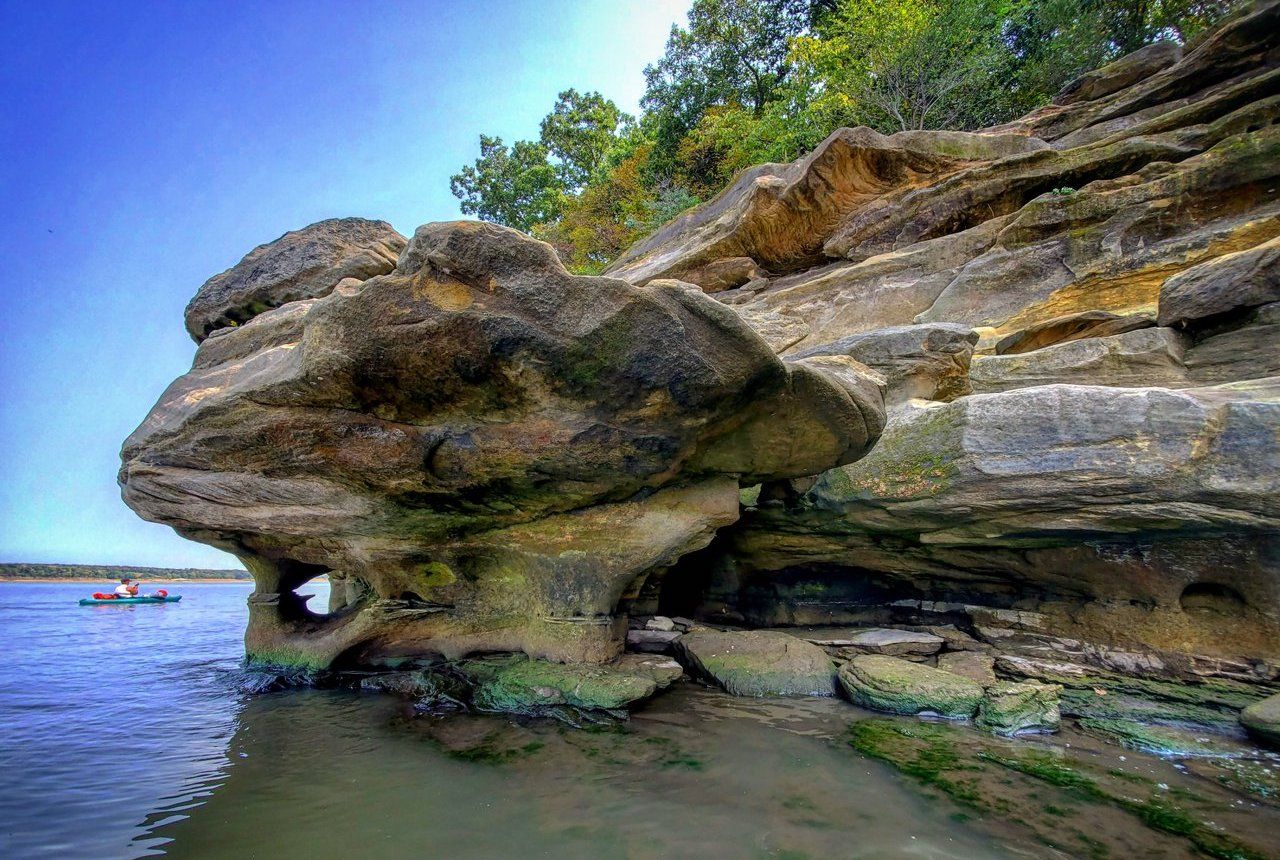 Though Lake Okoboji may be the best known,

For those who prefer to gaze onto the water rather than get on it, there’s a 13-mile hiking and biking trail around the lake as well. Check out the Whitebreast Recreation Area, in particular — set on a peninsula, it has great trails and a picnic spot right where the tip of the land meets the lake. 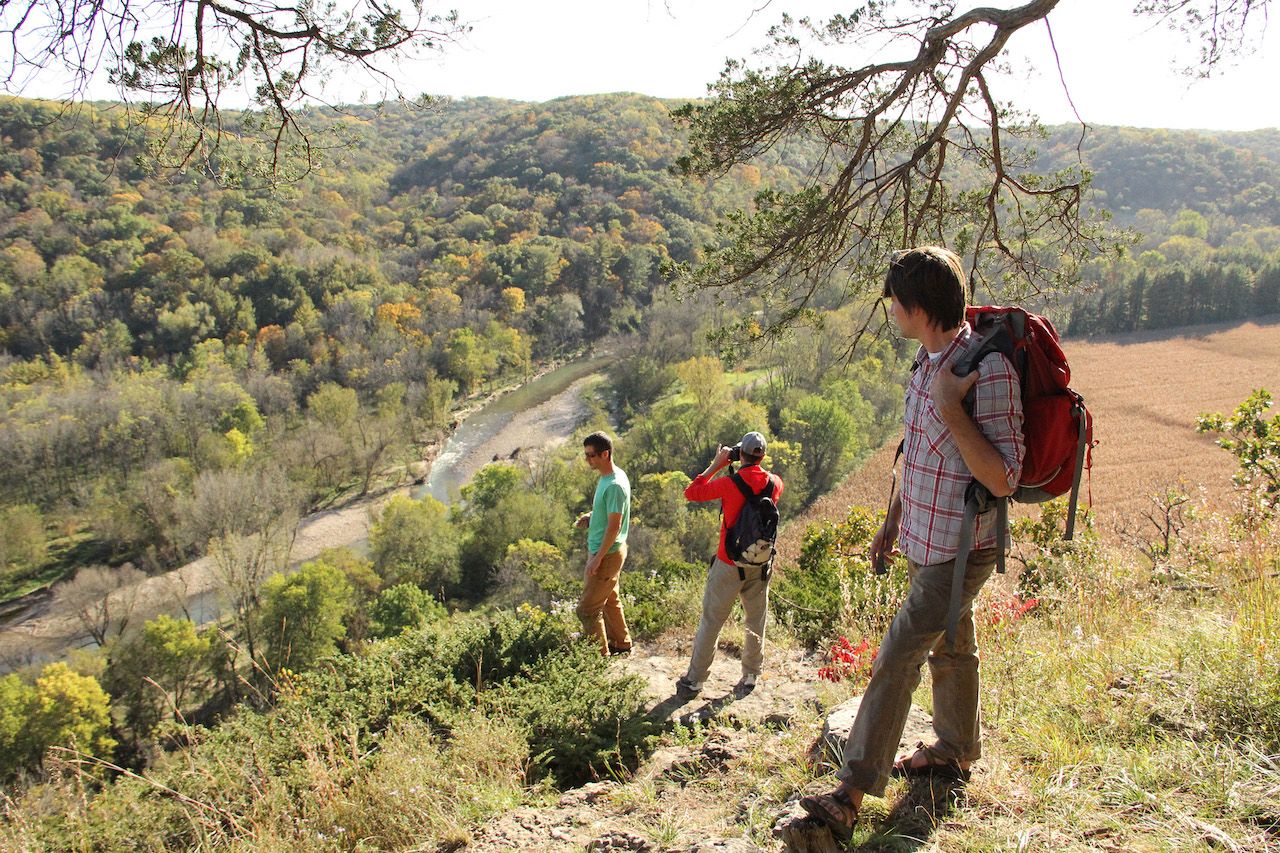 If you want to train for a hiking or backpacking trip in Iowa, you come to Yellow River State Forest. There are 45 miles of “marked” — emphasis on the quotation marks — and maintained trails, that will give both your map skills and your leg muscles a decent run for their money. The Paint Creek Unit is generally the hiker/backpacker favorite, with a designated backpacking trail (with campsites) for those looking for a serious Driftless getaway.

Then there’s the mountain biking — keep in mind, this area was one of the few around not to be carved away by glaciers during the last Ice Age, leaving high ridges and limestone bluffs excellent for soaring up and zooming down. About 20 miles of trails are suitable for bicycles, and they’ll lead you to super scenic overlooks, through mature groves of timber, and to bubbling trout streams for that contemplative water break.

4. Driving and hiking over glacial dust 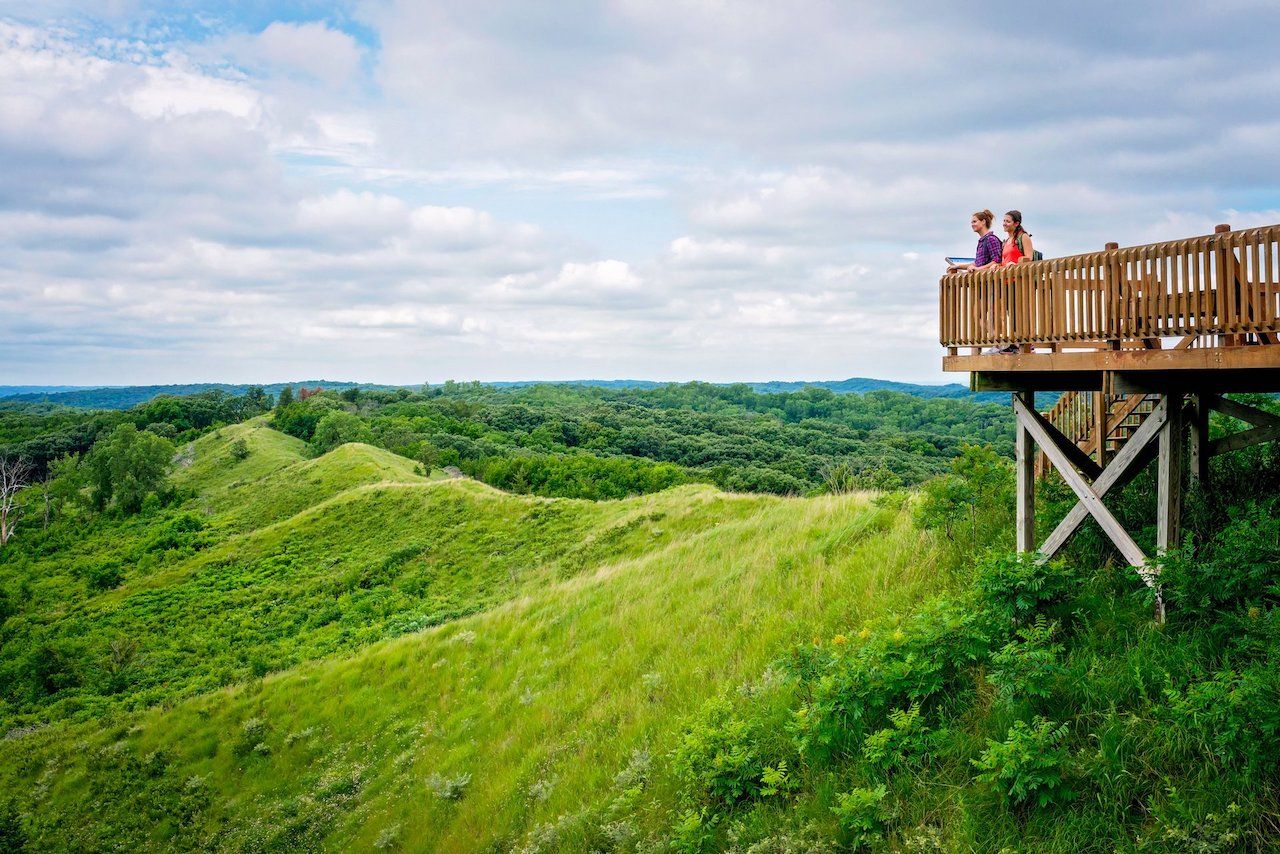 Iowa’s Loess Hills (pronounced “luss”) are a product of some of the world’s most unique geology. Loess on this scale — that is, glacial dust, the consistency of flour, rising and falling for miles upon miles — is only found here and in China. When glaciers ripped their way through Iowa some 10,000 years ago, this is one of the most-pronounced legacies they left behind.

Today, a drive down the Loess Hills National Scenic Byway is a beauty, but as Werner Herzog put it, “The world reveals itself to those who travel on foot.” There are more than 60 miles of trails in the Loess Hills State Forest, and the eight-mile Brent’s Trail is a classic spring through fall. Feel free to expect downright majestic views. 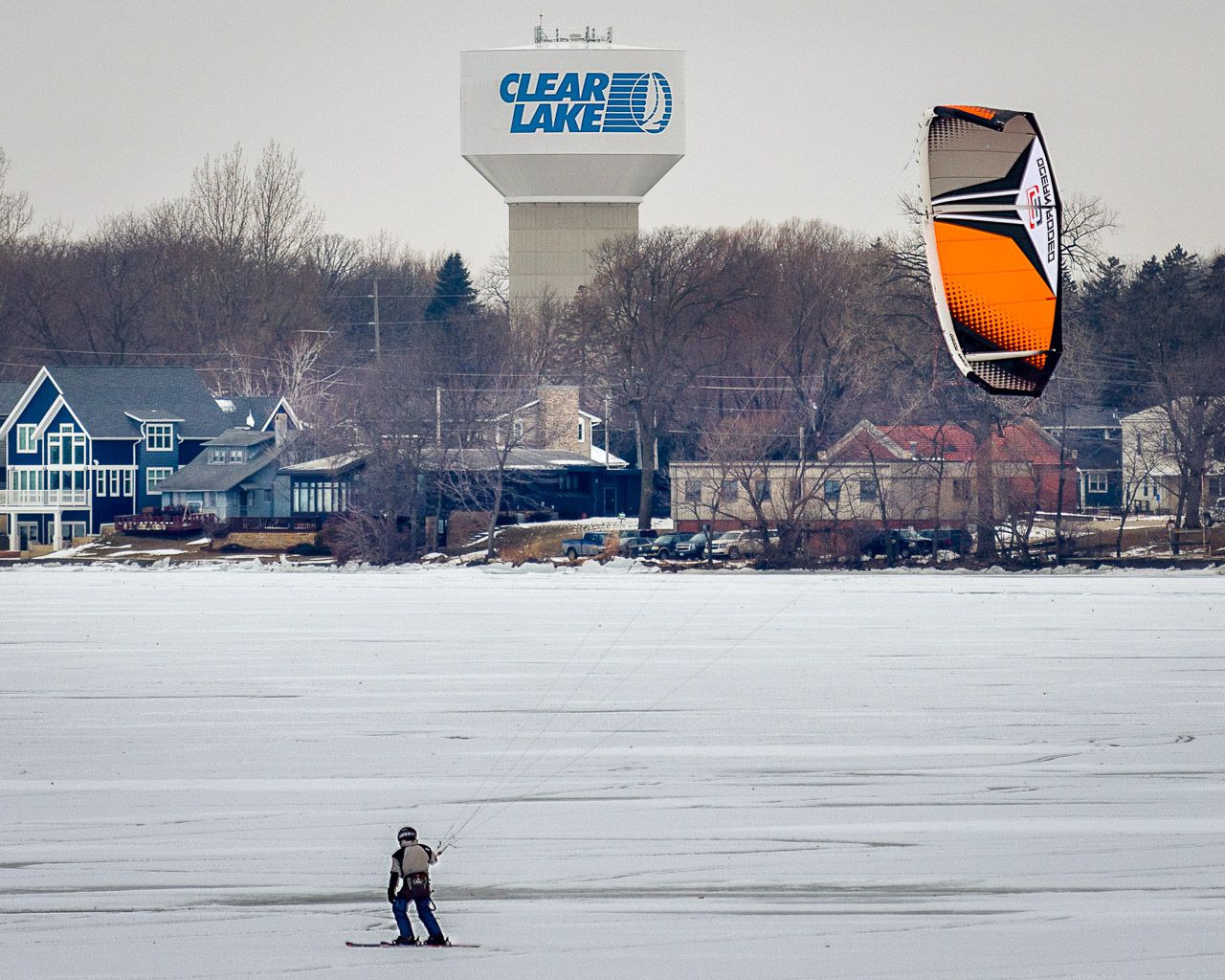 Central Iowa might be the closest thing to what most imagine the state looks like. That is, flat. In this region, the winds blow and they are strong, gaining speed on the open plains. Clear Lake — nearly 4,000 acres and anchoring the town of the same name — is a not-so-surprising spot for kiteboarding. There are plenty of launch sites, and you’ll likely tap out before the wind does.

Another kind of kiting is popular here, too: the flying kind. Clear Lake’s Color the Wind Kite Festival takes place every February — winds are even wilder and more whipping in winter — when hundreds of absolutely wondrous kites take to the skies, including a 60-foot blue whale. Bring hot cocoa or your own kite to get in on the action.

6. Pedaling with the pros — across the entire state 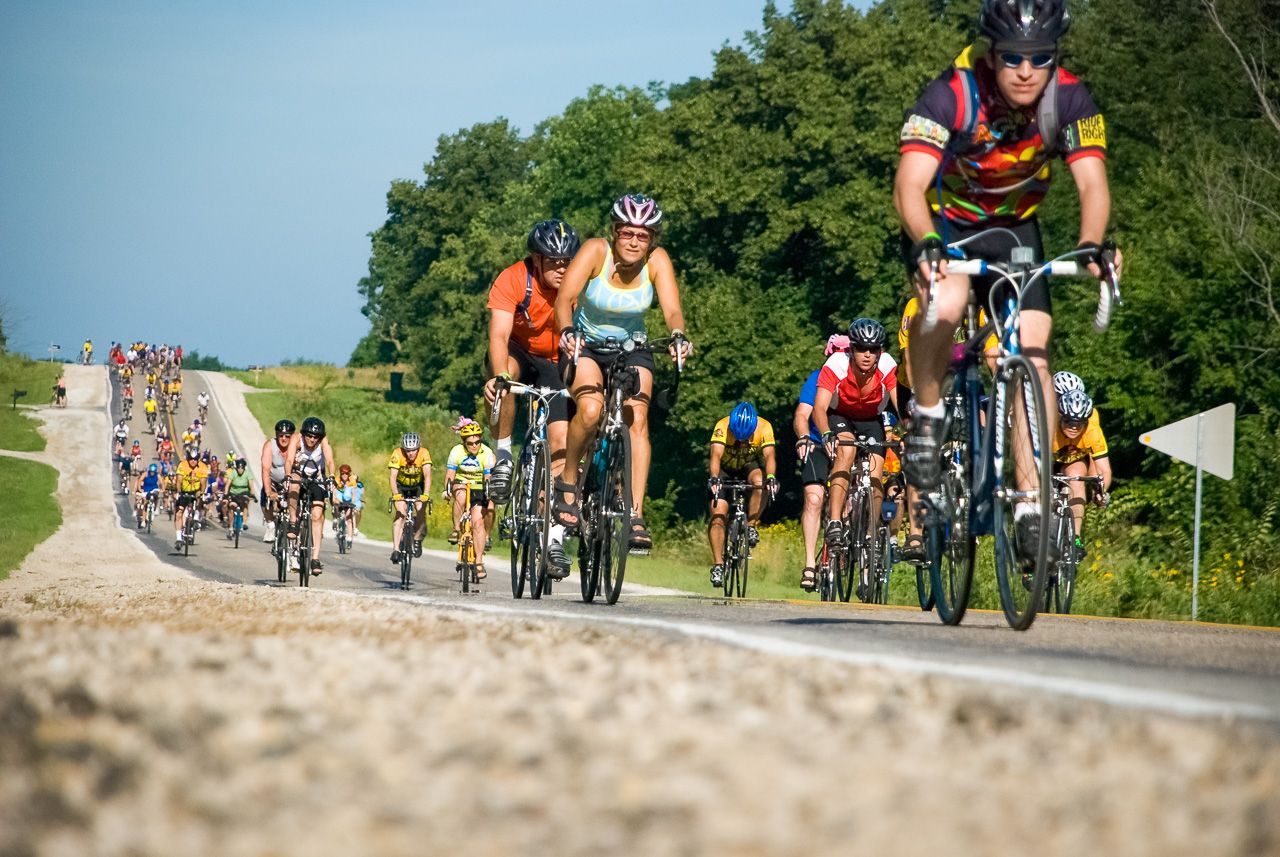 Iowa loves its biking. Loves it. What else are you going to do with all that rolling, open land? Trails crisscross the state, from town to town, like a two-wheeled Pony Express. Just pack a picnic, plenty of water, and see where you wind up… Or, join thousands of others and non-competitively race to the finish line. RAGBRAI, the largest bike-touring event in the world, runs every summer, crossing the state from west to east. Each year the route is different, typically clocking in around 465 miles — most cyclists average 67 miles a day. It’s easily the wildest way to see the state in seven days.

If you need some suggestions on where to start — RAGBRAI aside — Ankeny’s High Trestle Trail, the Great American Rail Trail from Waterloo to Solon, and Council Bluff’s Wabash Trace Nature Trail are all solid options. 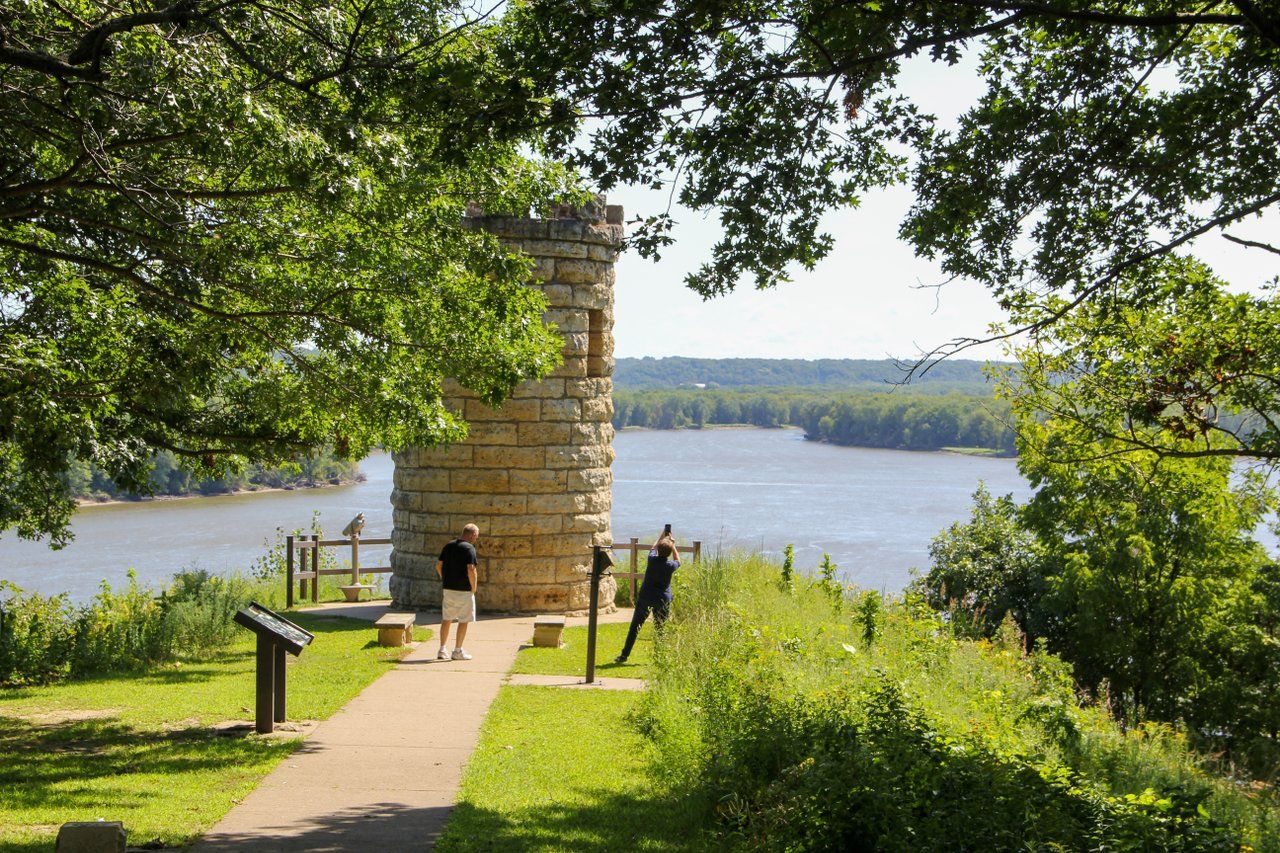 Iowa’s northeast corner — around Decorah and Dubuque — is brimming with hard-to-believe attractions, the foremost of which may just be the Mines of Spain. The name isn’t false advertising, either: Julien Dubuque was given a land grant from Spain to work this area for its lead. Today, the Julien Dubuque Monument stands like a castle ruin above the Mississippi, and it’s just one site from which to take in the amazing views. Twenty-seven miles of trails snake through the park, between quarry walls that feel like canyons, along Catfish Creek, through tallgrass prairie, and down to the river.

Of course, the park’s history goes much further back than Iowa’s first European settler. Some 8,000 years ago, prehistoric Indigenous cultures lived, traded, and explored right here. With a keen eye, you can still see their mound sites and rock shelters today.

8. Getting eagle-eye views over the Mississippi 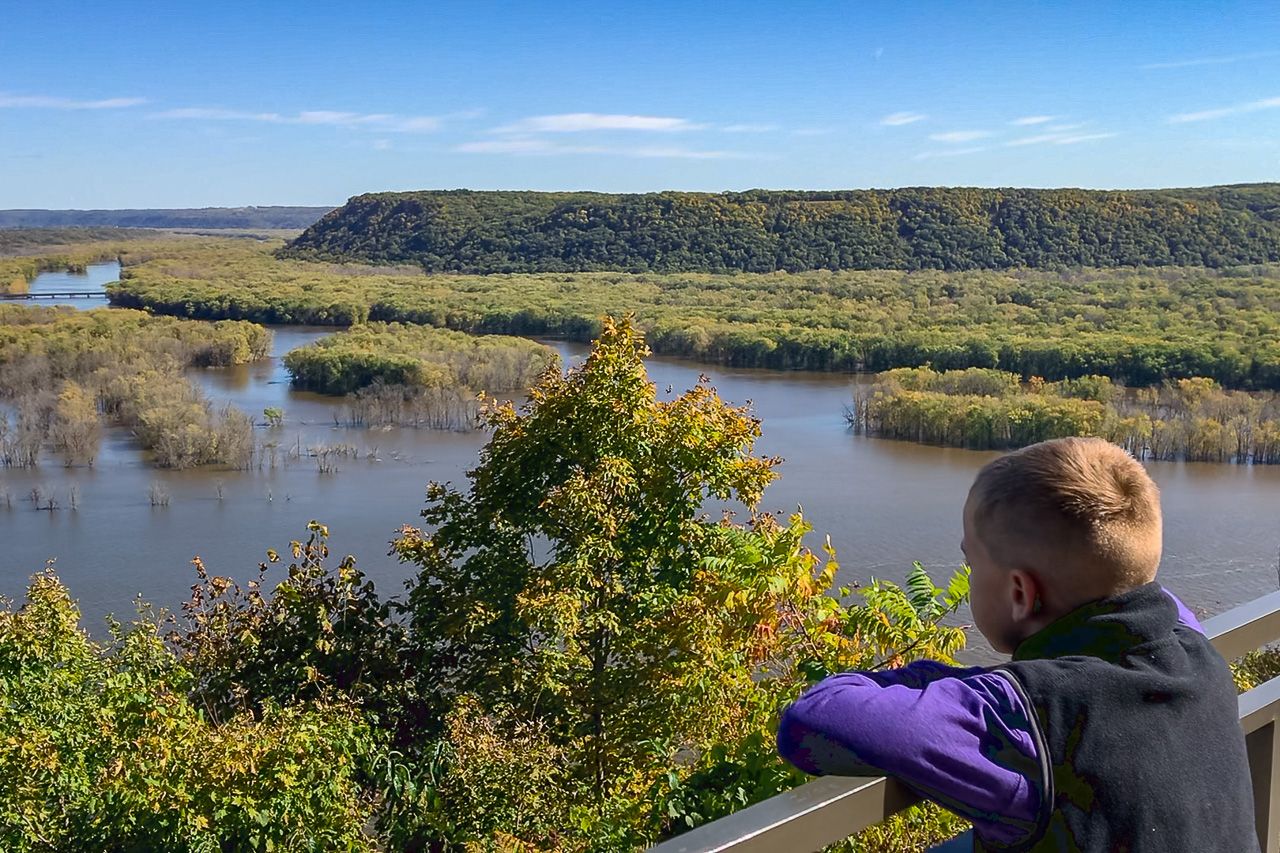 It’s not Iowa’s highest spot — that’d be Sibley’s Hawkeye Point — but it feels like it and it’s named like it. At Pikes Peak State Park, you’ll stand atop a 500-foot-tall bluff, watching the Wisconsin River flow into the Mississippi. Endless wooden staircases climb up the ridges, little waterfalls pour down the bluffs, and 11 miles of trails wander old-growth hardwoods, never once felled by white settlers.

Nearby McGregor and Marquette are classic old river towns hanging onto their industrial, brick-laden heritage. They’re excellent places for a meal on the water, a glass of wine, or a steaming latte and a stroll down a 20th-century main drag. You can also check them out as you cruise the Great River Road National Scenic Byway, an opportunity to slow it down, ponder the power of nature…and decide what unexpected adventure you’ll get up to next in Iowa.

This post is proudly produced in partnership with Travel Iowa.
Tagged
Outdoor Iowa, United States
What did you think of this story?
Meh
Good
Awesome

How To Piss Off Someone From Iowa

20 Differences Between a Normal Friend and an Iowa Friend

9 Abilities Iowans Have Over Everyone Else

18 Questions Only an Iowan Can Answer

13 Signs You Were Born and Raised in Cedar Valley