Exploring the wild shores of Nova Scotia serves up experiences you just won’t find anywhere else. Its unique geography gives rise to the world’s highest tides, a terroir that’s the basis for amazing wines, the freshest seafood and local produce, and a love for the world that makes Nova Scotians seek out adventure in every part of this fair province.

If all you’ve ever seen of Nova Scotia is Halifax (as lovely as that is), or the drive out to Peggy’s Cove (also lovely), then you don’t know just how many experiences are hiding in plain sight. Do more when you’re here — starting with these nine suggestions and seeing where they take you.

1. Riding the world’s highest tides in the Bay of Fundy 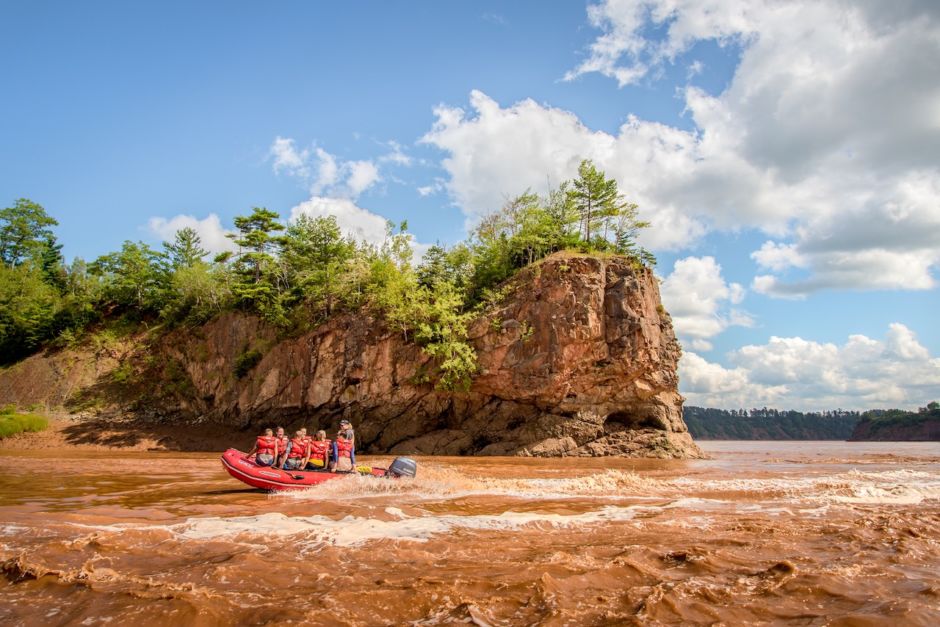 At their highest and lowest points, the tides in the Bay of Fundy are a record-setting 53 feet apart. And although there are perfectly serene spots from which to view this natural phenomenon, the best way to experience it is on a motorized inflatable boat in the mouth of the Shubenacadie River as the tide rushes in — creating massive waves that come right at you. It’s an adrenaline rush comparable to whitewater rafting, as your Zodiac surfs the muddy waters.

Heading out on the water with Tidal Bore Rafting Resort includes the added attraction of mud-sliding down the river banks (messy fun) and a lobster-boil bonfire with local wine-tasting session — accompanied by live music and flights of local rum. Post-fire-and-drinks, stay the night in one of their cedar and pine cottages overlooking the river.

2. Escaping to a private beach…by helicopter 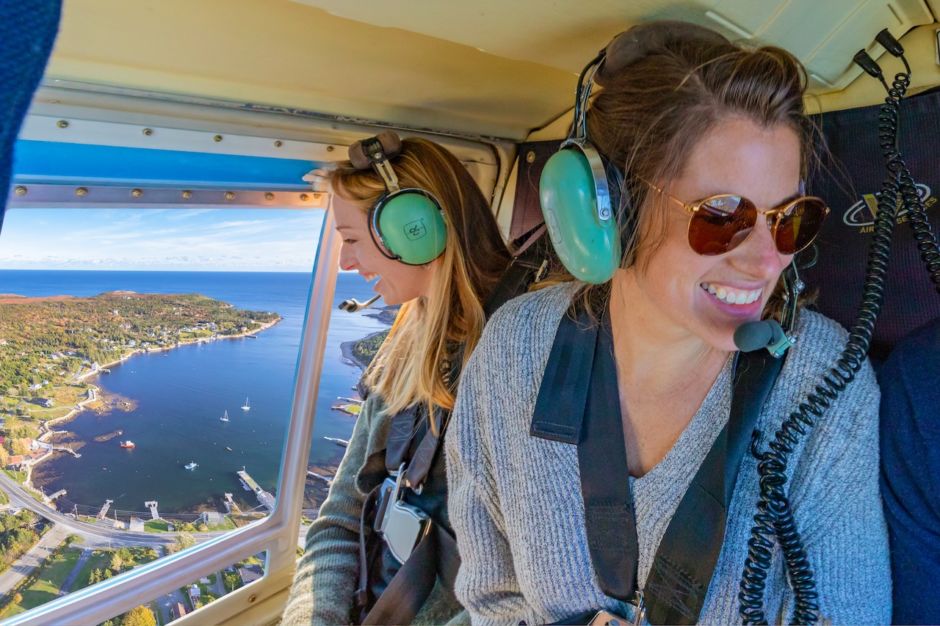 There are tons of secluded beaches in Nova Scotia, but few visitors get to see the one on Sambro Island in Halifax Harbour — which is also home to North America’s oldest surviving lighthouse, first lit in 1758.

You can get the beach and the entire island all to yourself as part of Vision Air Service’s Heli-Picnic Island Escape. Well, all to yourself except for the helicopter pilot and your personal sommelier, who’ll be serving you Nova Scotia bubbly and local cheese and charcuterie. It’s 100% posh. 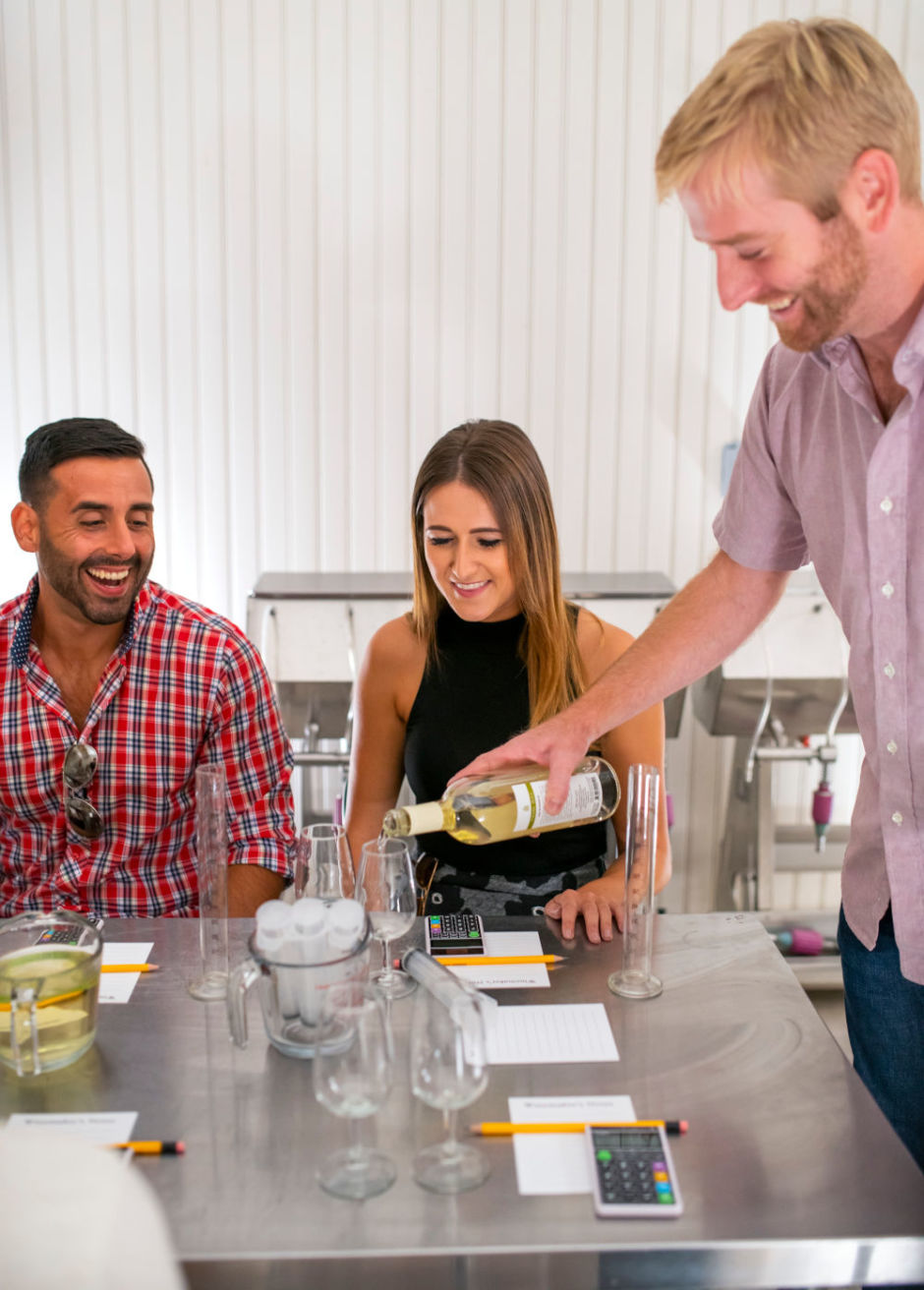 The wine industry in Nova Scotia has exploded in recent years, with its own appellation (Tidal Bay) winning awards the world over. At Avondale Sky Winery, you can do more than sample what’s on offer in their tasting room — you can actually create your own signature blend of wine as part of their Wine Lab Adventure.

Winemaker and generally cool dude Ben Swetnam takes you through the wine-blending process. Afterward, the group does a blind taste test to see who created the ultimate bottle of Tidal Bay — before sipping a few glasses while feasting at the winery’s award-winning restaurant. Bonus: You get to take a bottle home, with a customized label to show your friends it’s all yours. 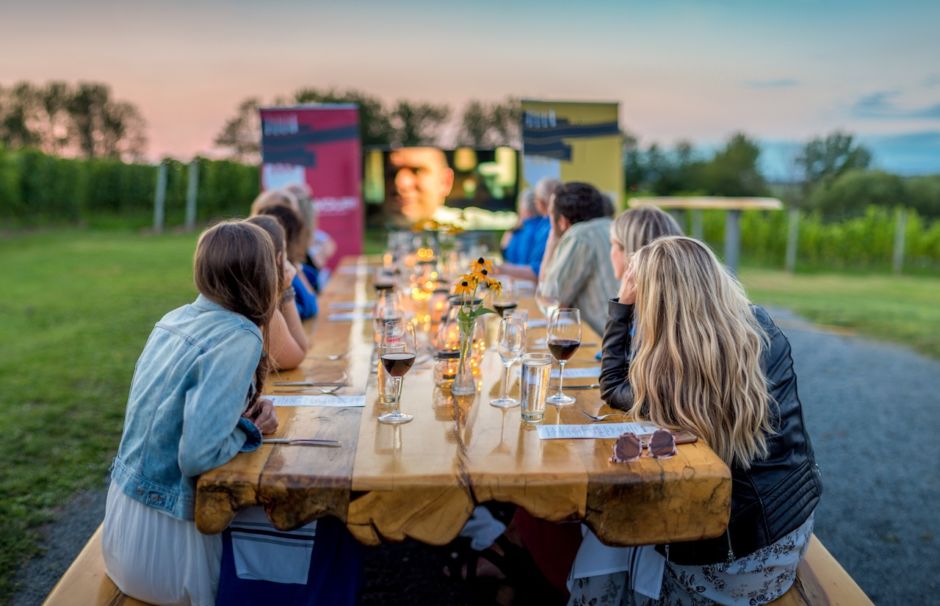 Every year, food-and-film lovers take over the sweet little town of Wolfville for Devour! The Food Film Fest. Running since 2009, this festival gets bigger each time it’s held (13,000 people attended the 2018 events) and has attracted big-name guests — including the late, great Anthony Bourdain — to introduce their favorite food films.

Taking place October 22-27, 2019, Devour! will serve up six days of events with high-profile chefs and filmmakers from around the world, and Wolfville (a great foodie destination in the heart of Nova Scotia’s wine region) will be buzzing with the excitement of it all. 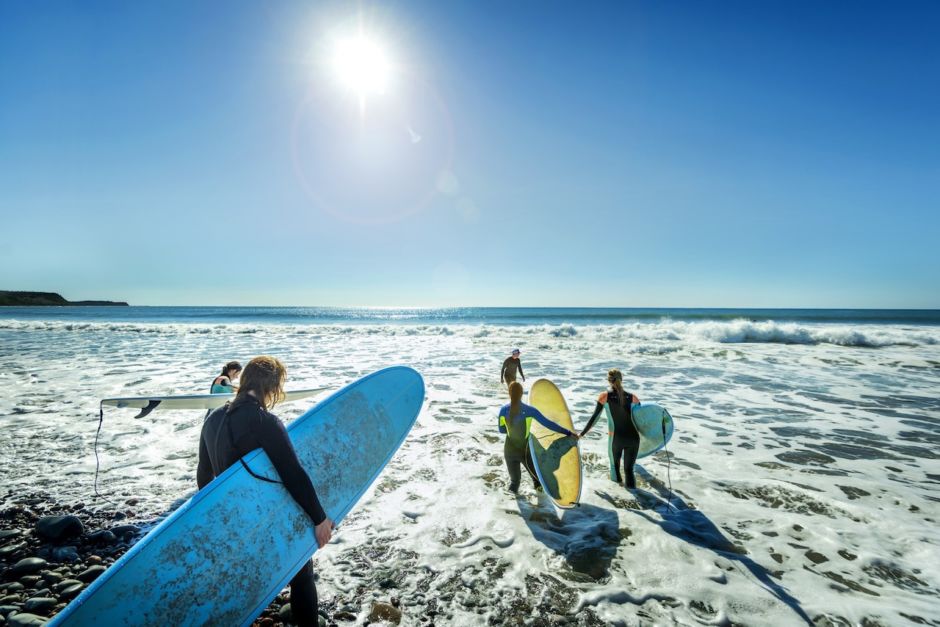 Surfing is a year-round pastime in Nova Scotia (though you’ll likely need a drysuit to cope with the frigid temperatures for the big winter waves). Between August and November, in particular, surfers come to the province for the hurricane-season swell and hardcore thrills.

But there are plenty of opportunities for beginners to learn here, too. Head to Lawrencetown Beach Provincial Park for a session with East Coast Surf School, who provide excellent teachers and all the equipment necessary to get you up on a board and surfing waves the same day. 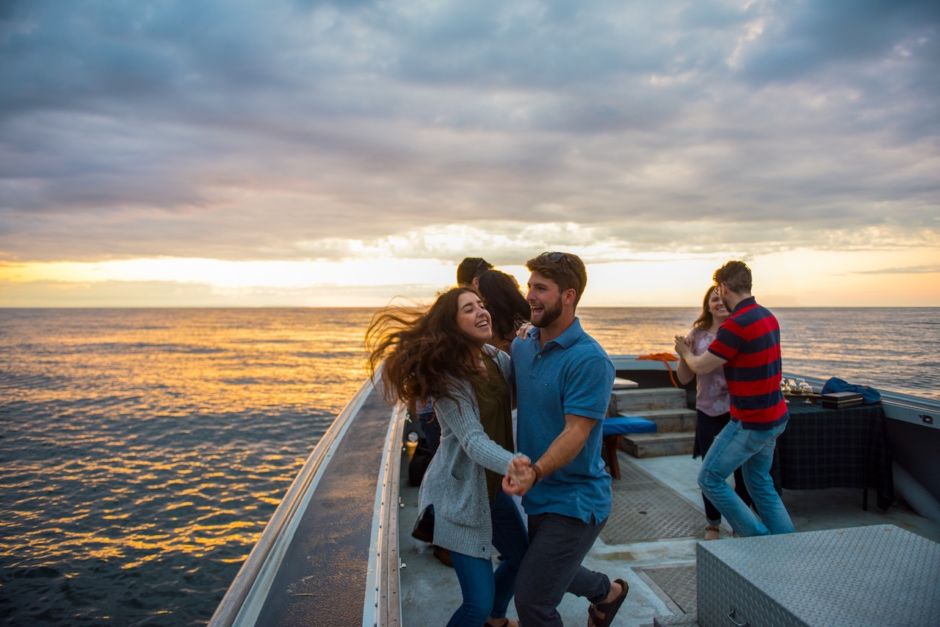 Cape Breton Island, accessed via causeway from the provincial mainland, is the heart of Celtic culture in Nova Scotia. Head to the Celtic Music Interpretive Centre in Judique for a brilliant tour that showcases the very best of local food, drink, and music. The Ocean Ceilidh (ceilidh — pronounced “kay-lee” — being Celtic for dance party) starts with wine at the center and a seafood feast on the beach before heading to sea on a fishing boat for a whisky tasting. Out on the water, you’ll dance the night away to bagpipe and fiddle music. 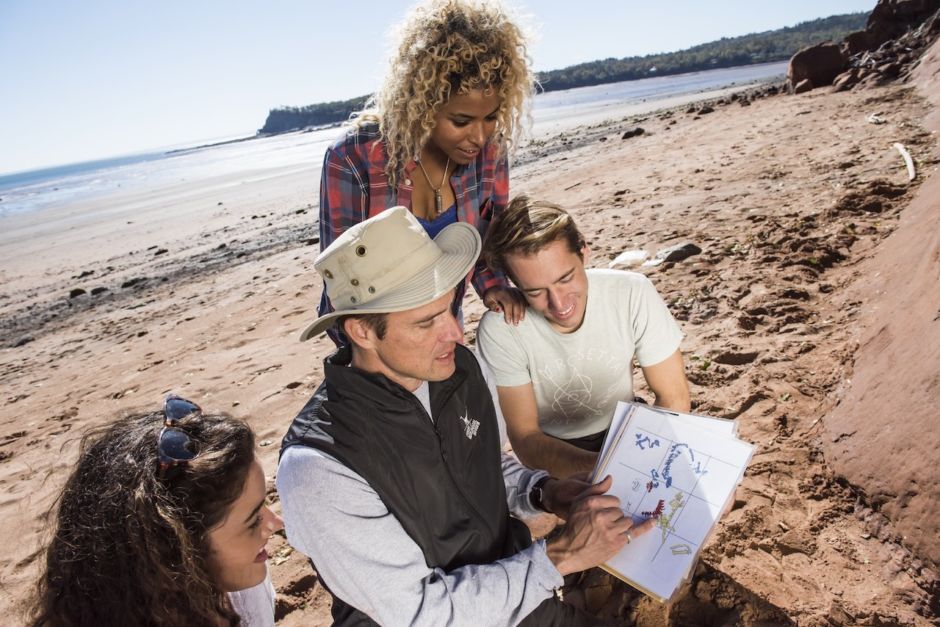 Parrsboro is home to the Fundy Geological Museum, where the many fossils and dino bones revealed by the world’s highest tides are stored and studied. Canada’s oldest dinosaurs have been discovered here, and you can help find more by joining an actual dig with a paleontologist on the shore.

The Tidal Reveal experience takes you to the dig site via Zodiac, where you’ll spend two to three hours digging and learning about what you’re uncovering. After your hard work is done (and you’ve unearthed something incredible and ancient, hopefully) the tour finishes with a tasty lobster sandwich picnic on the Jurassic-era beach.

8. Feasting on the ocean floor 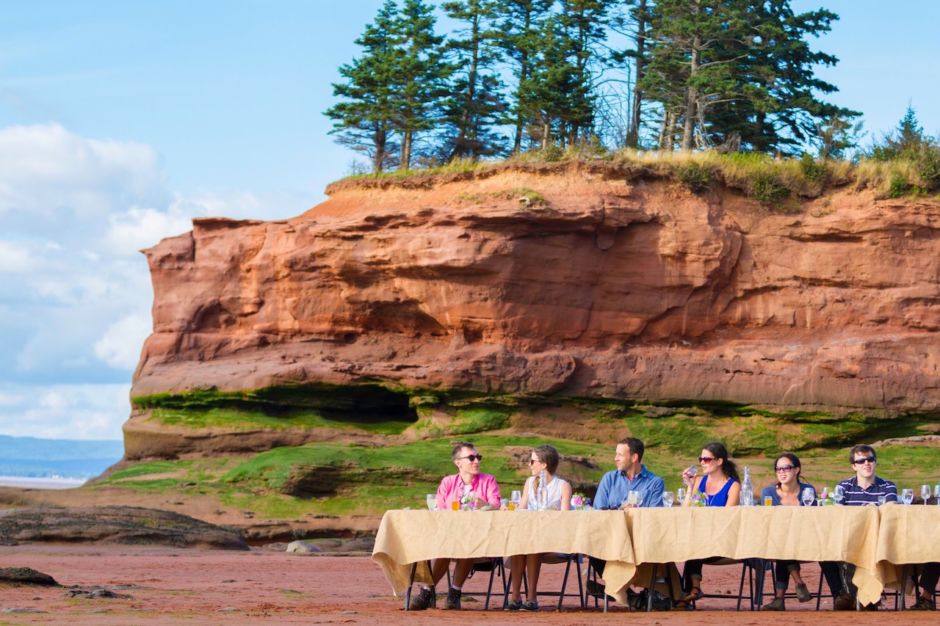 Burntcoat Head Park is a super cool spot where, when the tide is out, you can walk on the ocean floor among towering red flower-pot rock structures. And throughout the summer months, an exclusive dining event is offered here (book well in advance, as it sells out every year!).

The Dining on the Ocean Floor experience starts with you foraging for wild edibles and eating a seafood lunch on the beach (complete with local beer and wine pairings). You’ll then be taken on a guided tour of the ocean floor before feasting again. A decadent three-course dinner showcasing the very best of Nova Scotian cuisine will be served up family style, overlooking the incoming tide. The day ends with an ocean floor campfire — and you being completely satisfied and overwhelmed by the beauty of it all.

9. Chilling in a yurt on a private island 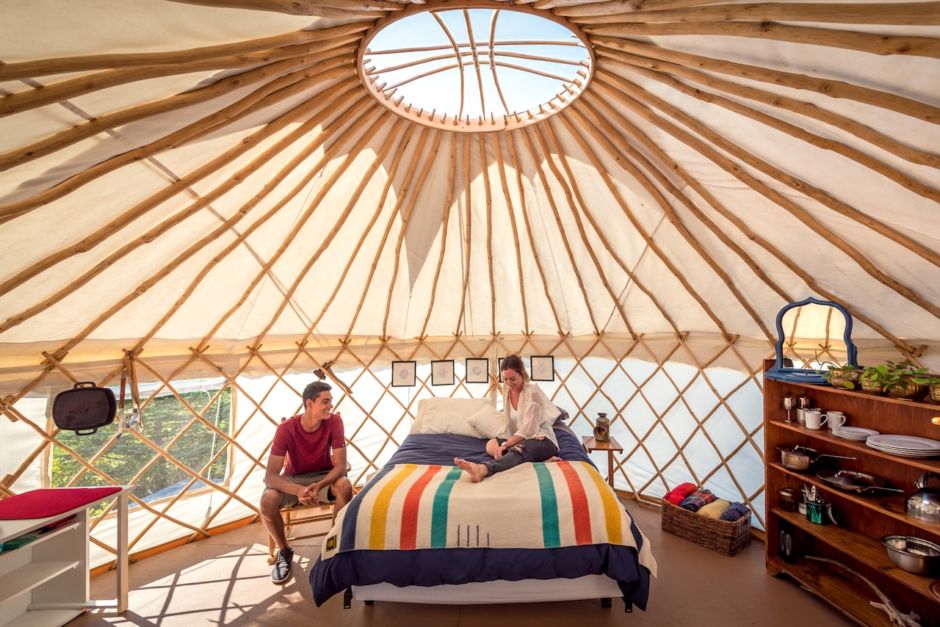 Nova Scotia’s South Shore is ridiculously pretty, and getting out on the water when you’re down there is a must. There’s an awesome tour you can join that includes a four-hour guided kayak expedition around secluded coves, past a seal colony, and to great snorkeling spots. Ultimately, you end up on a private island in a yurt built for two, where you’ll spend a cozy night stargazing though its skylight. An easy-to-prepare seafood supper is provided for you to cook in your yurt.

The next day you’ll take bikes and a gourmet picnic lunch from a local cafe so you can explore more of the coast, cycling the winding ocean road. Unforgettable, indeed.