New York City is not for the faint of heart. A night on the town here will test your will as much as your wallet. The city is, however, a great place to cut around corners and dive down sketchy staircases — especially for those who enjoy a proper cocktail. The best drinks in town are often the hardest to find, a treat only for those who put in the effort. Here are nine speakeasies worth searching for.

Tucked behind a casual brownstone apartment entrance, Bar Centrale literally looks and feels like you’re about to walk into a random stranger’s apartment. Maybe that’s why the place has become a hideaway for Broadway stars and other familiar faces looking to relax over a post-work drink without causing a scene.

How to find it: Make your way past the hip bars and eateries that dot West 46th Street to about a half block east of 9th Ave. When you feel like you’ve missed it and wandered into a residential section, you’re on the right track. Look for the address — 324 — in big, bold numbers on the front door. You’ll generally need a reservation to get in, particularly if sitting down is part of the plan.

B Flat is as reminiscent of the Prohibition era as a modern speakeasy can be, down to the live jazz in the corner and the wall of whiskeys you’ve never heard of. If you’re into eating Japanese fusion food in dark and shady settings, this space will quickly make it to the top of your list for a late-evening bite.

How to find it: B Flat’s website looks like it was built by a hacker in the late nineties and promptly forgotten about, so don’t count on detailed directions there. Head up Church Street in Tribeca, until just past the part where the road forks into 6th Ave. Find a small Italian joint called Da Mikele, and walk just past it until you identify the door with ‘277’ on the front. Head downstairs, but only after you’ve removed your sunglasses. 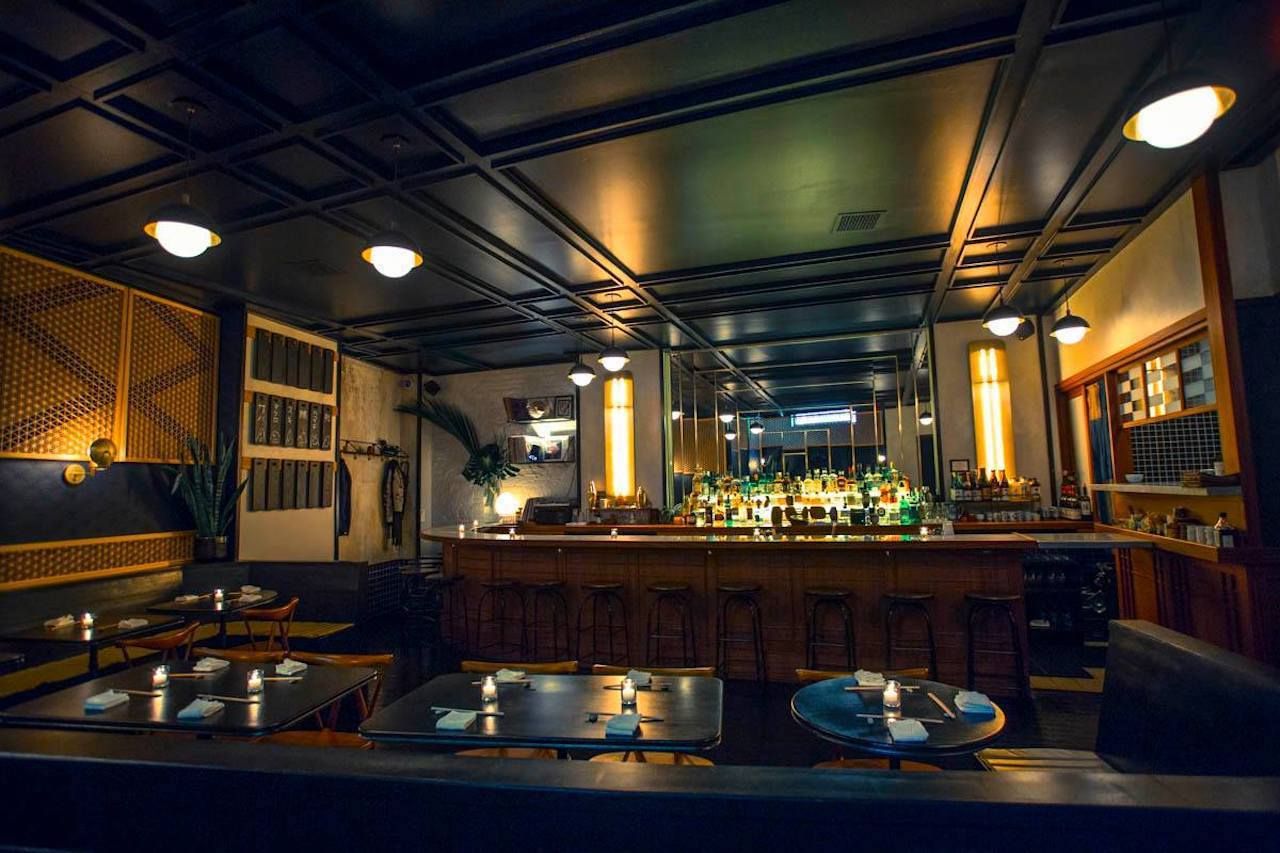 Any who’ve done a bit of drinking in Japan likely recall the relaxing, almost tranquil, drinking spots located throughout Tokyo that offer a welcome escape from the bustling streets of the city. Karasu is that type of haven for hipsters looking to step briefly away from Brooklyn. Japanese digs welcome you into this cozy izakaya, or Japanese pub, where you can have a bite to eat that’s as memorable as the sake.

How to find it: Karasu is located inside a restaurant called Walter’s. Once inside, make your way to the back of the restaurant and through a lightly marked door.

The Office is everything a classy speakeasy should be, and the go-to option if you want to impress someone. It’s located inside the Mandarin Oriental Hotel, directly across from Central Park, and within walking distance of multiple places you’re likely to hit on a trip to New York. Old, classic spirits speak to the days when going out for a drink was an experience to be cherished, not just enjoyed in the moment. Although it’s on the hotel’s 35th floor, the speakeasy ambience means you can’t see the views. No matter, you can still experience the glow of sun setting over New York — as interpreted by modern LED lights behind the bar.

How to find it: The general speakeasy hunt is reversed in this case — you’re headed up instead of down. Enter through the hotel’s main entrance and find The Aviary on the 35th floor — The Office is inside it. A word for the wise: make a reservation here. Otherwise, you’re likely to be turned away before you even step foot in the elevator.

The Back Room is the speakeasy for those looking to party. This bar has been getting rowdy since way back when the actual bootleggers snuck whiskey in by the barrel during Prohibition, and being spotted on the floor these days is still worth as much street cred as a trending Instagram photo. Don’t be surprised when the bartender hands you a beer inside a paper bag — things haven’t changed much over the years.

How to find it: Start by locating the sign for the Lower East Side Toy Company. This is your cue to head downstairs through the gate. If you feel like being extra classy once inside, find the bookcase inside the bar. Stand to the side until someone opens it, then head through to the even more hidden back room.

Speakeasies are, at least in theory, supposed to be a reward for those who put in the effort to find them. Fig. 19 holds that tradition, as you could easily be confused into visiting the crazy dance club which causes such a racket next door. Fig. 19 stands as the antithesis, offering creative takes on classic cocktails in the back room of an art gallery called SFA Projects. The mood is mellow and ambient, a nice retreat from the Bowery chaos.

How to find it: SFA Projects is located between Bowery and Roosevelt Park, between Kenmare and Broome. Enter from Chrystie Street and walk through the art gallery, but don’t head downstairs or else you’ll find yourself in the dance club. Instead, make your way through a door that looks like it leads into a closet. Your prize awaits.

Angel’s share has two locations but, beyond review sites like Yelp, virtually zero web presence (their Facebook page has posted twice since 2012). They instead let their cocktails do the talking, and the commotion these drinks have caused have made Angel’s Share in the East Village a can’t-miss spot among New York’s hidden drinking establishments. The menu changes regularly, making each visit a surprise in itself. You’ll be unwelcome if you show up with a group larger than four, so best keep a tight hold on the secret.

How to find it: Start by locating Village Yokocho, a quaint high-end Japanese restaurant that happens to house an unmarked door just inside.

PDT stands for Please Don’t Tell, but we’re not here to follow instructions. Any who remember those old diners where you’d order food via a phone attached to the wall in your booth will feel right at home at PDT. To get in, you must pick up the receiver inside a beat-up old phone booth inside an establishment called Crif Dogs. Pay close attention to the instructions, and you’ll be rewarded with one (or more) of the city’s most creative cocktails.

How to find it: Crif Dogs is a late-night hot dog spot for booze hounds, located just off St. Mark’s Place near Tompkins Square Park. Follow the smell of backyard BBQ but push through to the phone booth and try to be as discreet as possible — the last thing anybody wants is a horde of drunk bros making their way into the speakeasy.

Much like The Back Room, the original Chumley’s has been throwing down since Prohibition. This trendy cocktail spot recently underwent a bit of a facelift. It’s now not only one of the original speakeasies still serving drinks but among the most presentable of them all, an excellent place for a Scotch and easy conversation. Old portraits still line the walls, holding the image of the early 1900s and a retreat from modern New York. This is the spot to kick off your New York speakeasy tour, with inspired cuisine on par with the classy cocktails. Their dinner menu is served until 10:30 PM on Friday and Saturday, and 10:15 PM on weeknights.

How to find it: Just off the corner of Bedford and Barrow, not too far from the Hudson River, Chumley’s is located in the back of the building but is approachable in that no hidden phones or alleyway meetings are required. Reservations are recommended, however.