To truly get to know a place, “fast” doesn’t cut it. Forget the rental cars, forget the subway systems — exploring a city on foot is the best way to free your senses. Not to mention free your wallet, so you can put more of your travel money towards the experience.

You can stretch your budget even further when you choose Greyhound to get you there. Their budget-friendly buses don’t spare the modern amenities you need to travel in comfort, either — with reclining seats, charging ports, and on-board internet, you can arrive at your destination fully charged and ready to step. Greyhound typically drops you off right in the heart of a city’s downtown, so your adventure can begin as soon as your boots hit the pavement. 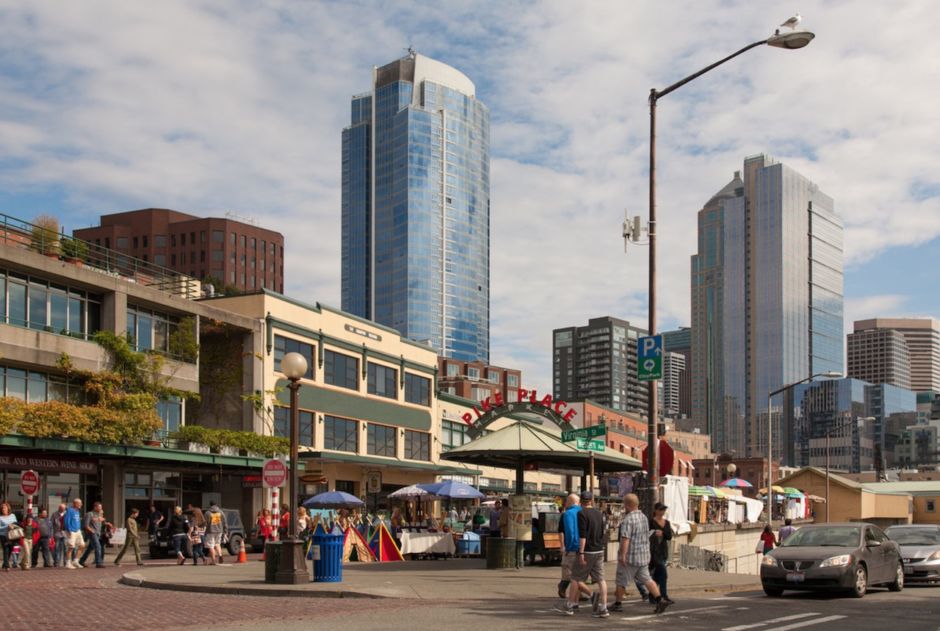 The city of Seattle has a plan to become the most walkable in the nation, and it’s already well on its way. Case in point: the Capitol Hill neighborhood, located just north of the famed Pike Place Market and Greyhound’s S Royal Brougham Way station. This highly walkable district brings together a young and artsy population and is known for its incredible nightlife — the streets of Capitol Hill pack in enough theaters, music venues, bars, art galleries, and coffeehouses to keep you busy for days.

Take in a show from your next favorite indie band or let loose at a themed dance party at Neumos. For something quieter, visit Volunteer Park, which sits on a high point northeast of Capitol Hill and offers views of the city along with walking trails and a plant conservatory. To avoid the crowds, plan your trip for early spring or late summer. 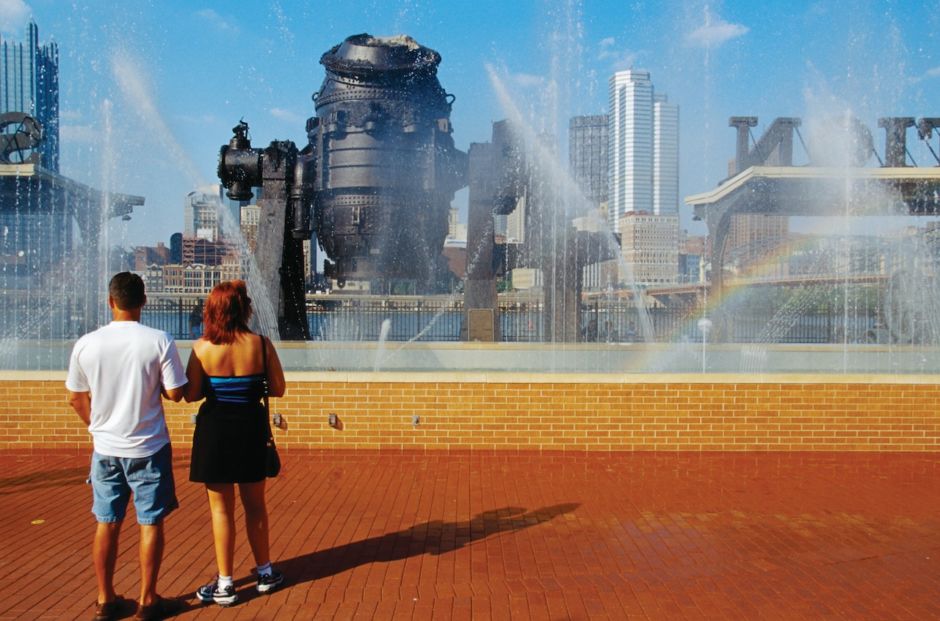 The City of Bridges is filled with distinctive neighborhoods, many of which are walkable from end to end. From the downtown Greyhound station on 11th Street, make your way the few blocks north to the water and hook up with the Three Rivers Heritage Trail System. Some 37 miles of trails meander through downtown Pittsburgh and along both sides of the Allegheny, Monongahela, and Ohio Rivers.

At the southern shore of the confluence, you’ll find one of the few spots where walking takes second place to riding. The trip up the historic funicular known as the Duquesne Incline scales the steep slope of Mount Washington, and at the top are some of the best views overlooking the city. When you’re ready, strike out in either direction on Grandview Ave to explore Restaurant Row and the rest of the popular Mount Washington neighborhood. 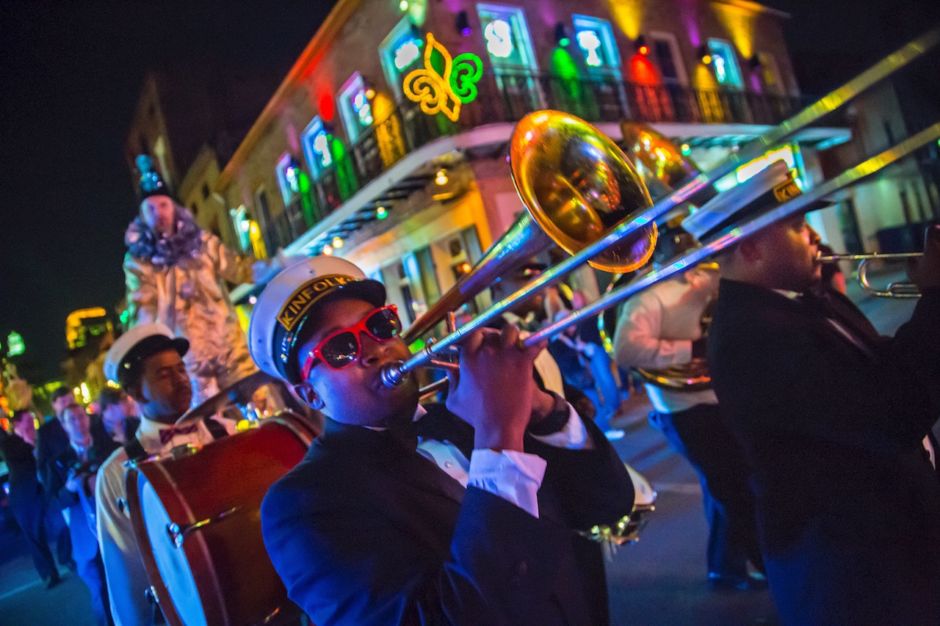 If you want to experience all that New Orleans has to offer, you have to do it on foot. And since the city’s most famous neighborhoods were designed before cars, walking is also how they were made to be explored. The French Quarter, just up the river from Greyhound’s Loyola Ave station, is renowned worldwide for its Mardi Gras celebrations — but there are plenty of sights you’ll want to see no matter when you visit.

Check out the Carousel Bar & Lounge at Hotel Monteleone, ranked one of the top 20 bars in the world. Inside, you’ll find a bar situated on an actual spinning carousel, along with nightly live music. Also of note is Preservation Hall — the intimate venue is famous for its old-school jazz concerts, and big-name acts (including the Rolling Stones and Foo Fighters) have been known to show up and put on impromptu gigs here. 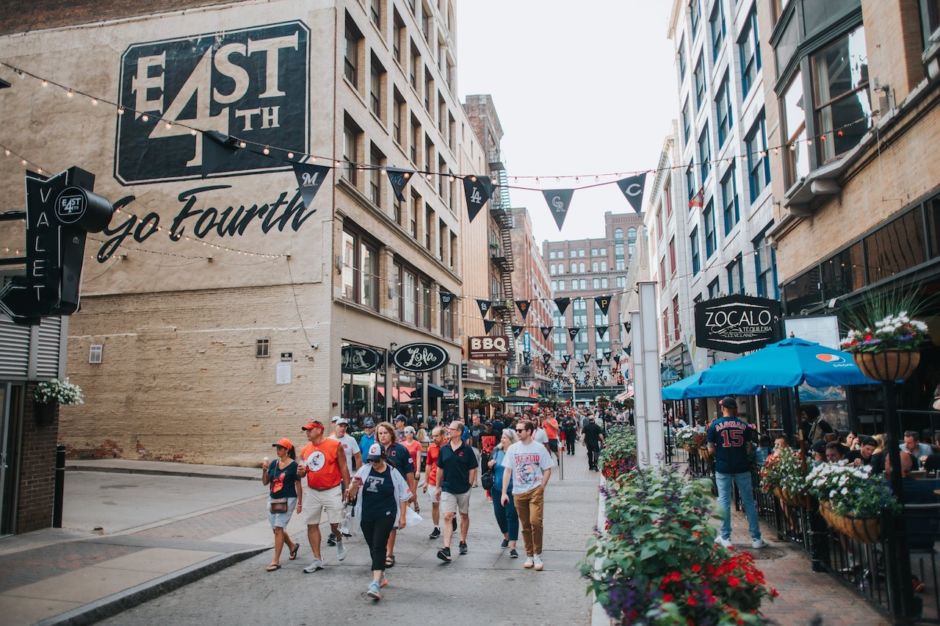 Cleveland, aka the Rock & Roll Capital of the World, has many walkable neighborhoods. Of note to travelers arriving at Greyhound’s Chester Ave station is the nearby East 4th Street district, a nightlife hotspot with plenty of bars and music venues. Once you’re there — it’s a half-mile walk from the station — head to one of the city’s most popular destinations for live comedy, food, and cocktails: Pickwick & Frolic. There’s also Red, the Steakhouse downtown, ranked one of the country’s best steakhouses.

If you didn’t nab a reservation at Red beforehand, head in the other direction toward Wilbert’s Food & Music, where Grammy-winning acts play. Find it in the Gateway District, across from Progressive Field (if you want to catch an Indians game) and Rocket Mortgage FieldHouse (ditto for the Cavaliers). 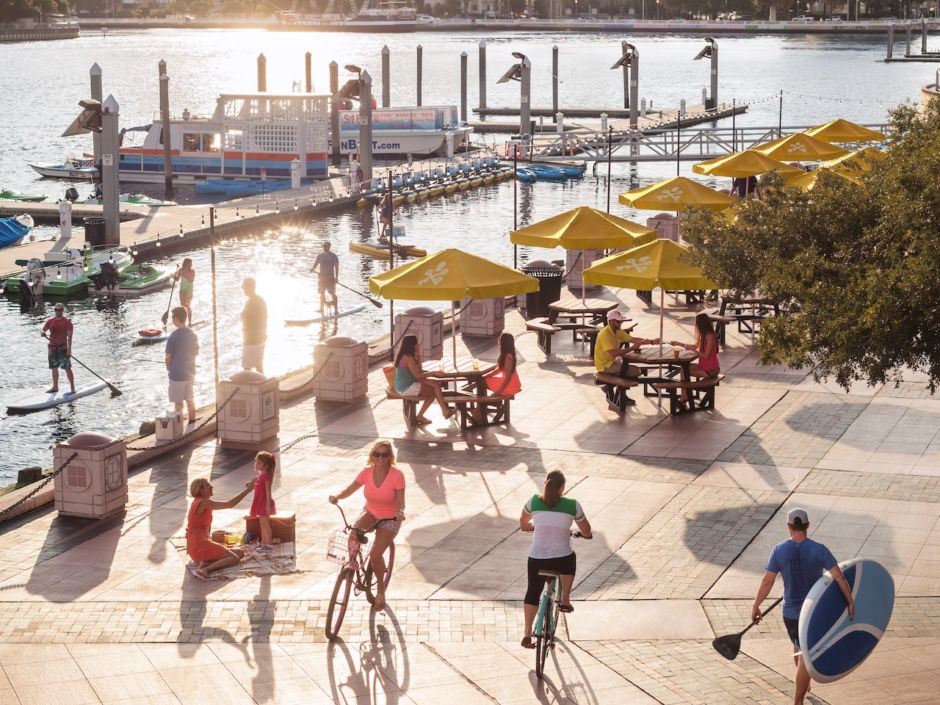 You might be headed to Florida for a beach vacation, but don’t overlook the experiences you’ll find in the middle of this Gulf Coast city. Greyhound’s E Polk Street station is right downtown, just blocks from the Tampa Theatre, the Straz Center for the Performing Arts, and the Tampa Riverwalk.

The 2.6-mile Riverwalk — which runs along, and sometimes out over, the Hillsborough River, connecting Water Works Park and Cotanchobee Fort Brooke Park — is one grand public art, dining, and shopping odyssey. You’re even allowed to get a to-go cup from certain restaurants and bars to keep you company. 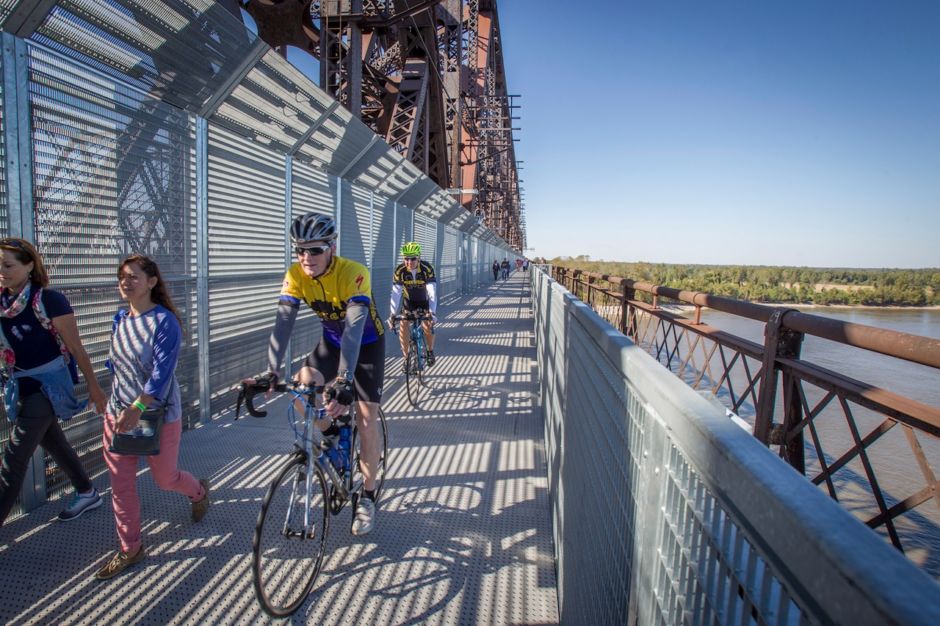 Memphis is one of the most walkable cities in the US, a piece of trivia that’s usually overshadowed by its reputation for barbecue. You will need some motorized transport once you pull into the Airways Blvd Greyhound station, which sits south of the city by the airport, but that’ll just give you an opportunity to grab some BBQ bologna (believe it or not) from Al’s Tasty Burger, and then jaunt on over to Graceland, a must-see on any first-time visit to Memphis.

To fill out the rest of your trip, head to Tom Lee Park, where you can walk along the Mississippi River for a mile or so before exploring the historic downtown and its many shops, sites, and shows. Or check out Shelby Farms Park — one of the largest urban parks in the country — with paved and woodland paths that get you into nature. 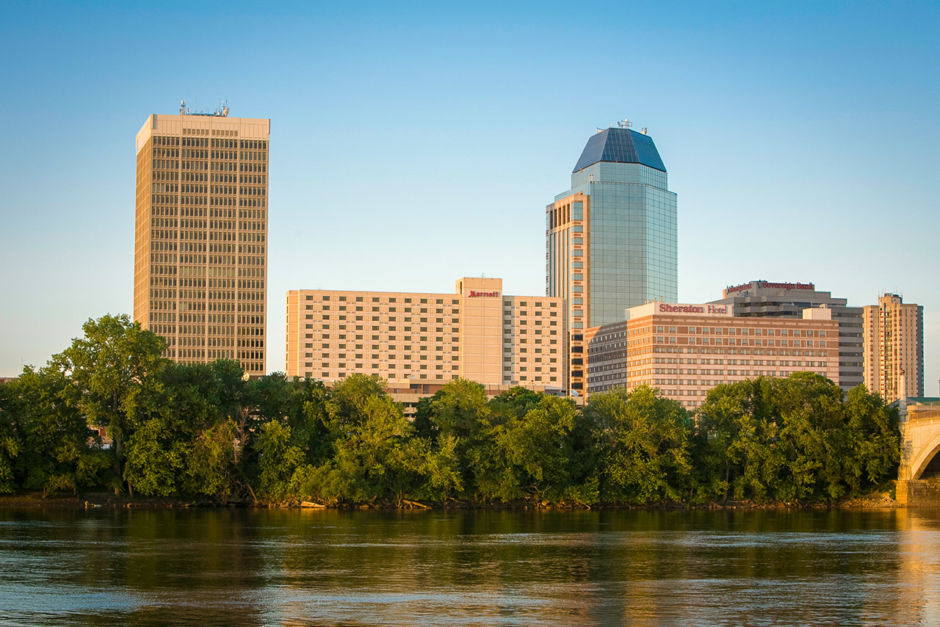 Springfield’s Union Station transportation hub, where your Greyhound will arrive, is just blocks from the Connecticut River. Before heading to the water to take in the views, make your way over to the nearby Springfield Museums complex. Your admission ticket gets you five for the price of one: two art museums, a history museum, a science museum, and a museum dedicated to Dr. Seuss (yes, this is his hometown!).

In the Springfield Museums Quadrangle, you’ll find the Dr. Seuss National Memorial Sculpture Garden, which includes sculptures of your favorite Dr. Seuss characters — don’t miss the 14-foot Horton the Elephant. Visit in the fall when temperatures cool and you can enjoy the New England foliage. 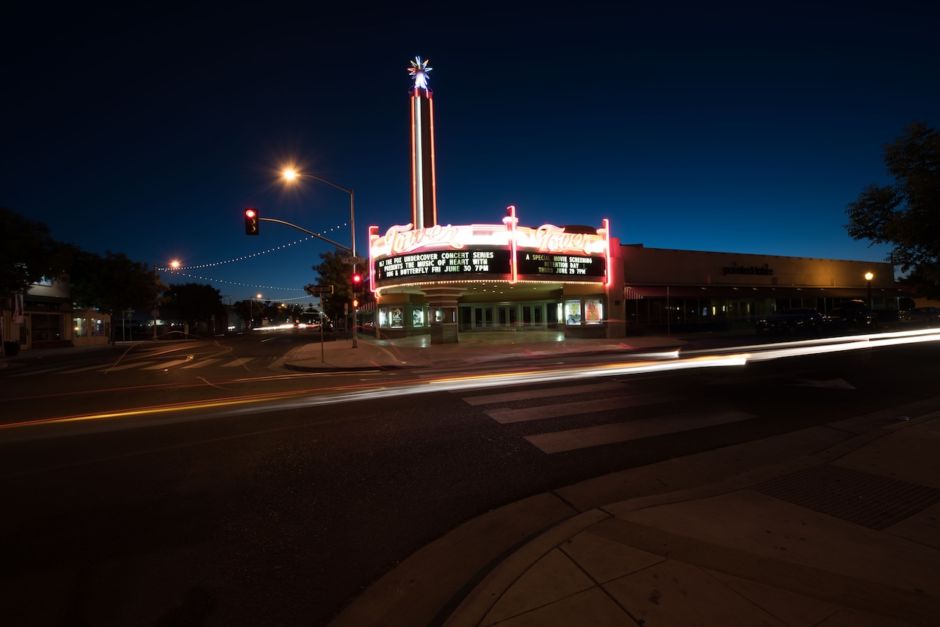 While much of California is car-centric, there are many neighborhoods hiding within its metropolitan areas that are extremely walkable. From Fresno’s Tulare St Greyhound station in downtown, walk or taxi the 2.5 miles to the Tower District, where you can spend several days exploring on foot from then on out. The area is named after the Tower Theatre, which hosts local and national artists puting on rock, jazz, and comedy concerts. The Spokeasy Public House, with its arcade and extensive collection of craft beer, is the perfect pit stop either before or after a show.

An even larger and perhaps more walkable neighborhood is Old Town Clovis — a short ride north toward the university will get you there — ripe with antique shops, plenty of coffee and beer, restaurants (shout out to Blast & Brew’s endless pizza menu), and boutiques unique to Fresno. Neighborhoods aside, visit in early spring when temperatures are warm and hotel prices tend to be lower, or in the late summer or early fall if you want to be in town for the annual Fresno Film Festival. 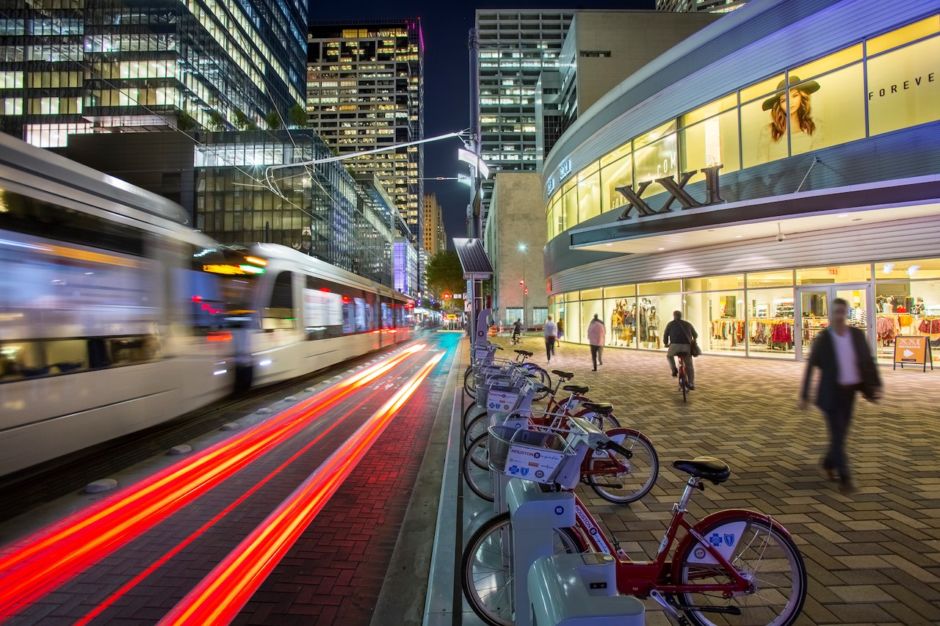 While moving between areas in the country’s fourth-largest city generally requires a car, many of Houston’s neighborhoods are walkable in and of themselves. The Main St Greyhound station is in the heart of Midtown Houston, home to many of the city’s most popular restaurants and bars — don’t even worry about renting a car if you’re staying here.

One of Houston’s newest green spaces is Midtown Park, where you can catch outdoor performances, festivals, art installations, and markets year-round. And, of course, be sure to commemorate your trip with an Insta-worthy snap in front of the famed Midtown Letter Sculpture in Bagby Park.