For skiers and snowboarders, a good day on the slopes is something to appreciate and look forward to. But visiting ski areas has an environmental impact, and it’s often up to the skier to ensure theirs is as minimal as possible. Follow these tips to keep your footprint small without sacrificing those epic turns.

Research gear before you buy. 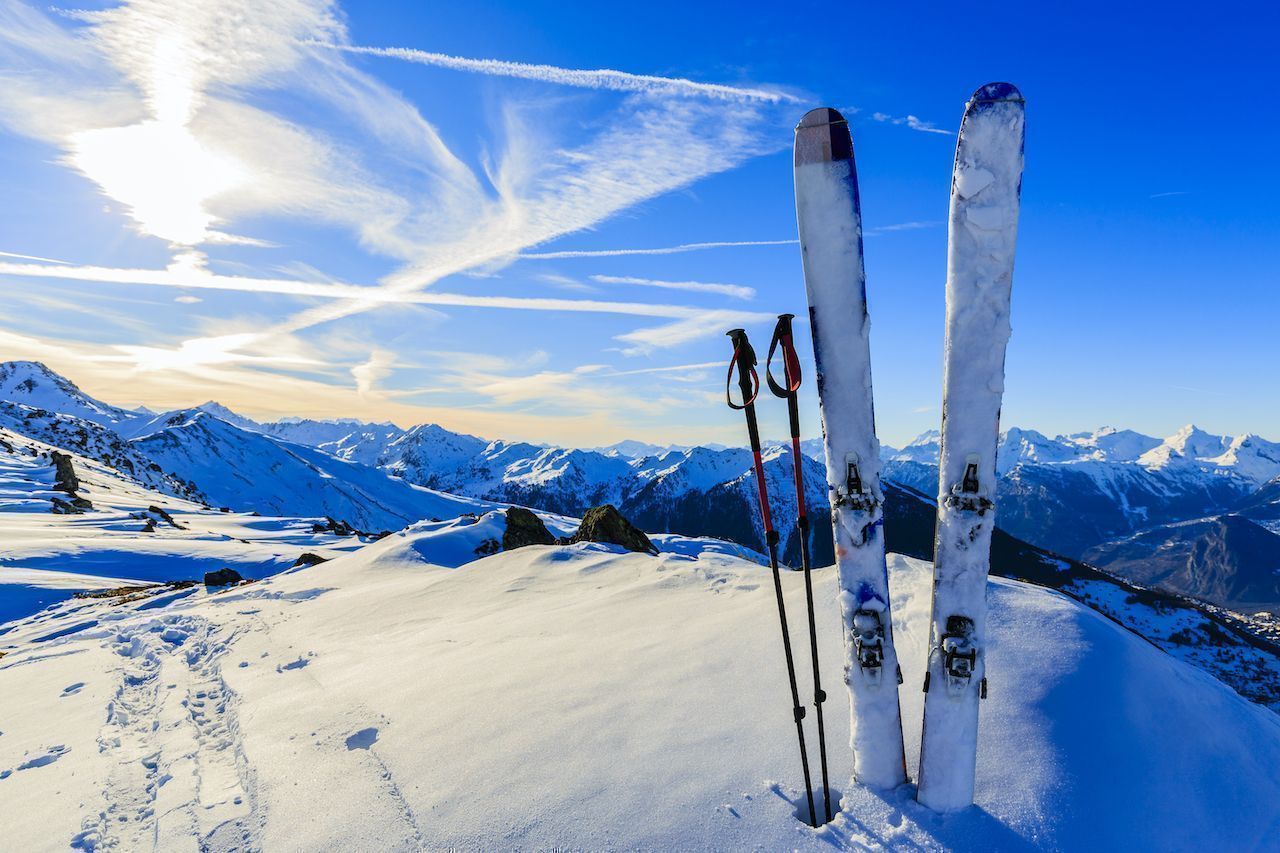 Here, we’re referring not only to how the gear performs but to how the company performs on a sustainability level. Buying quality gear means it will last longer, giving you both value for your money and having a significantly lower impact than gear that needs to be replaced every year or two. Sustainably sourced clothing is available for every single piece of ski gear you need for a great day on the slopes. This can include the sourcing of the materials, the facilities and manner in which the gear is produced, and how far the gear has to travel to reach your doorstep. Shop with local brands when possible, and when that isn’t an option, look at the production process on a brand’s website before purchasing it. When in doubt, opt for gear from a company that is forthcoming about its sourcing and production practices, rather than from one that says nothing.

As mentioned above, a quality local producer is often more sustainable because the money is kept in your community and their goods aren’t shipped from across the world. But a number of legacy and other larger ski industry brands have taken massive steps in recent years to reduce their environmental impact and pass that possibility on to customers. Salomon is a ski brand that has been open about its production and sustainability practices, documenting its process of cutting emissions and sourcing sustainable production. On the snowboarding side, Burton is a longtime leader in both boards and outerwear, and Arbor Collective sources renewable wood for its boards as certified by the Forest Stewardship Council. For jackets and other outerwear, look to Patagonia, The North Face, and Picture Organic Clothing.

“The most sustainable product is the one that lasts,” says Jenn Swain, global senior sustainability manager at Burton. “Seek out high quality, durable gear that’s produced using fair labor practices and environmentally preferred materials, such as ethically sourced down insulation and recycled polyester.”

The brand applies this theory in practice, reducing the petroleum input required for its products. “All Burton snowboards are made with bio-based SuperSapTM resin which has a 33 percent lower carbon footprint compared with petroleum-based resins, our board cores contain responsibly sourced wood which promotes biodiversity conservation, and we have eliminated the use of lacquer which can be toxic to human and environmental health,” Swain says.

Carpool or take public transit to the mountain. 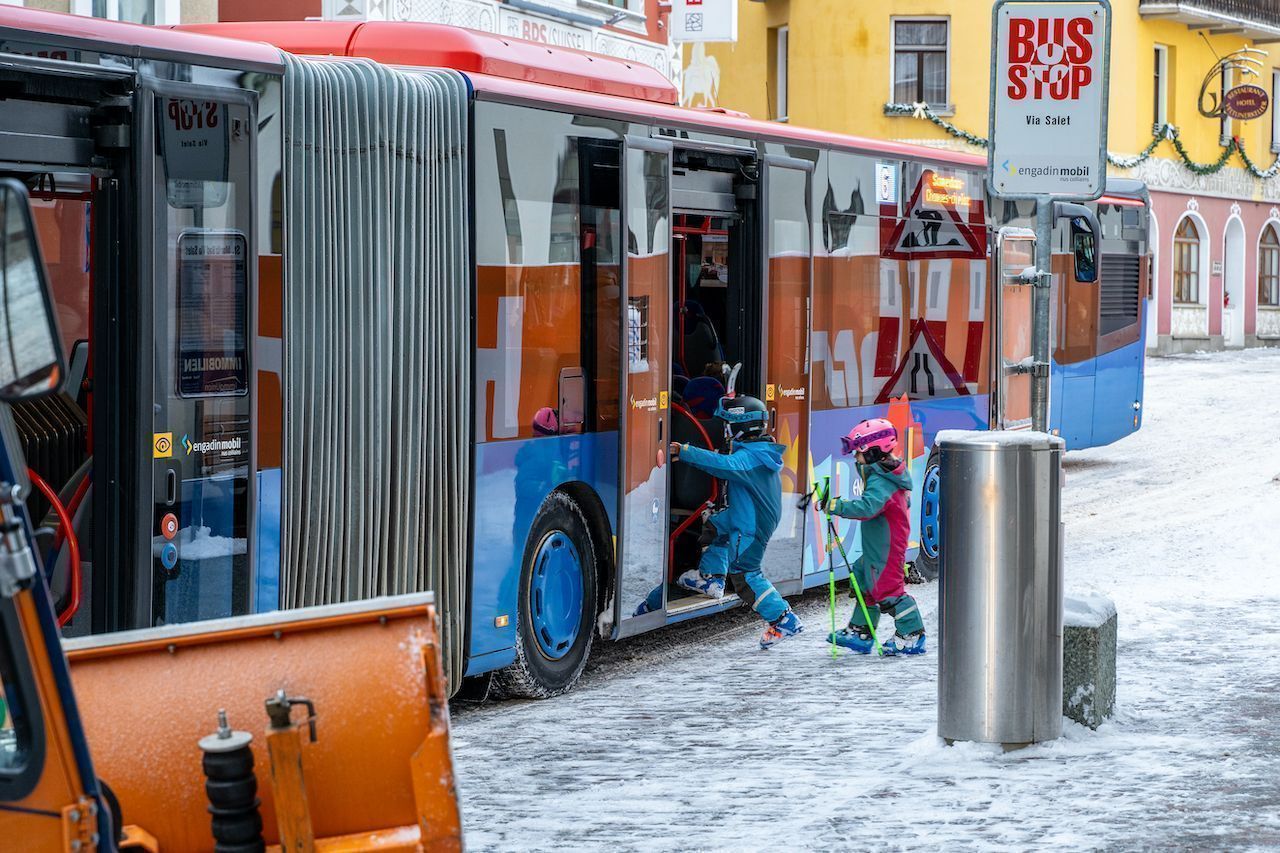 Most who have driven I-70 west of Denver or from Salt Lake City up Highway 210 during winter have experienced the frustration of bumper-to-bumper high country traffic. This is the case in many metropolitan ski hubs across the United States, and adding to the frustration is the single occupancy in many of the vehicles. The simple act of carpooling and ridesharing can take many of those cars off the road. Whether you are at home or on vacation, research carpool options to the ski area you plan to visit. Most resorts have advice on their website, and many major cities — including Denver and Salt Lake City — have parking lots for skiers to meet friends to share rides. San Francisco has a Tahoe Carpool club that organizes rides to and from Lake Tahoe.

Depending on your location, public transit may also be a viable way to get to many ski hills. The Colorado Department of Transportation is attempting to cut into its traffic woes with new Bustang and Snowstang services, which shuttle passengers on luxury coaches across the state for as little as $16, including to several ski areas. Towns, counties, and regions whose economies depend on the ski industry often have free public buses available to shuttle skiers between hotels, resorts, and entertainment districts. Summit County, Colorado, home to multiple resorts and ski areas, operates the Summit Stage, which services all resorts along with the towns of Dillon, Frisco, and Silverthorne.

The Utah Transportation Authority offers a ski service bus up Cottonwood Canyon. The Lake Tahoe area has similar service spread between the Tahoe Truckee Area Regional Transit service on the north shore and the BlueGo, trolley service, and local shuttles on the south shore. Karst Stage shuttles passengers from Bozeman to Big Sky, Montana. Those in major cities along the eastern seaboard have it a bit easier. Rome2Rio shows multiple route options from New York City to ski areas in Vermont and New Hampshire via train and bus, with similar options from Boston, Philadelphia, Washington, DC, and Baltimore.

The impact you have by taking public transit over driving is profound. A train ride from Philadelphia to Stowe, Vermont, emits 86 lbs of CO2 per person, whereas a solo drive emits 342 lbs and a flight emits 414 lbs per person. Public transit takes a bit of research but is often easier (and cheaper) than paying for parking. Plus, you don’t have to feel guilty about enjoying the après scene.

Optimize your trips, rather than taking more of them. 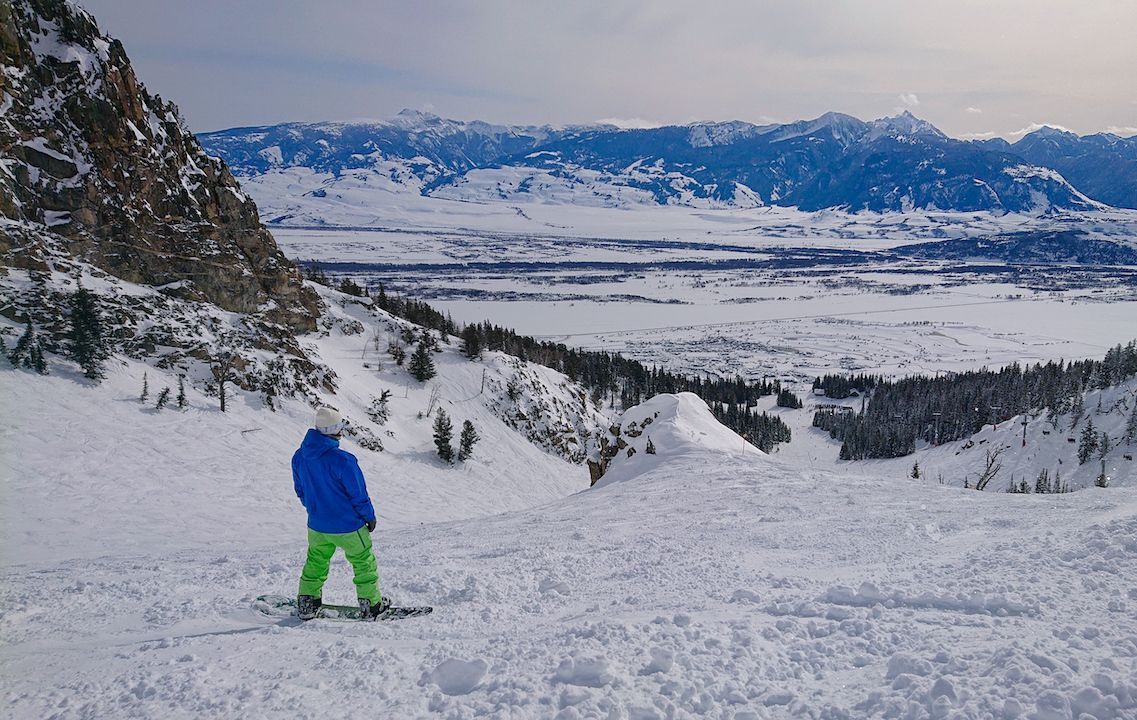 The bulk of a typical skier’s environmental impact comes from their transportation to and from the mountain. Combining ski days together in order to reduce the number of times you take to the road in a given winter is the biggest way you can reduce your ski habit’s environmental impact. This is true whether you’re traveling cross-country or heading two hours up the road — staying overnight and getting an extra day in rather than heading back up the following weekend is far less harmful.

Offsetting flights, drives, and other carbon-emitting actions helps the planet recover from your journey. Offsetting a flight, which involves a financial contribution to an organization working to combat climate change, typically costs about $5 per flight, the amount slightly reduced for a similar one-way drive. 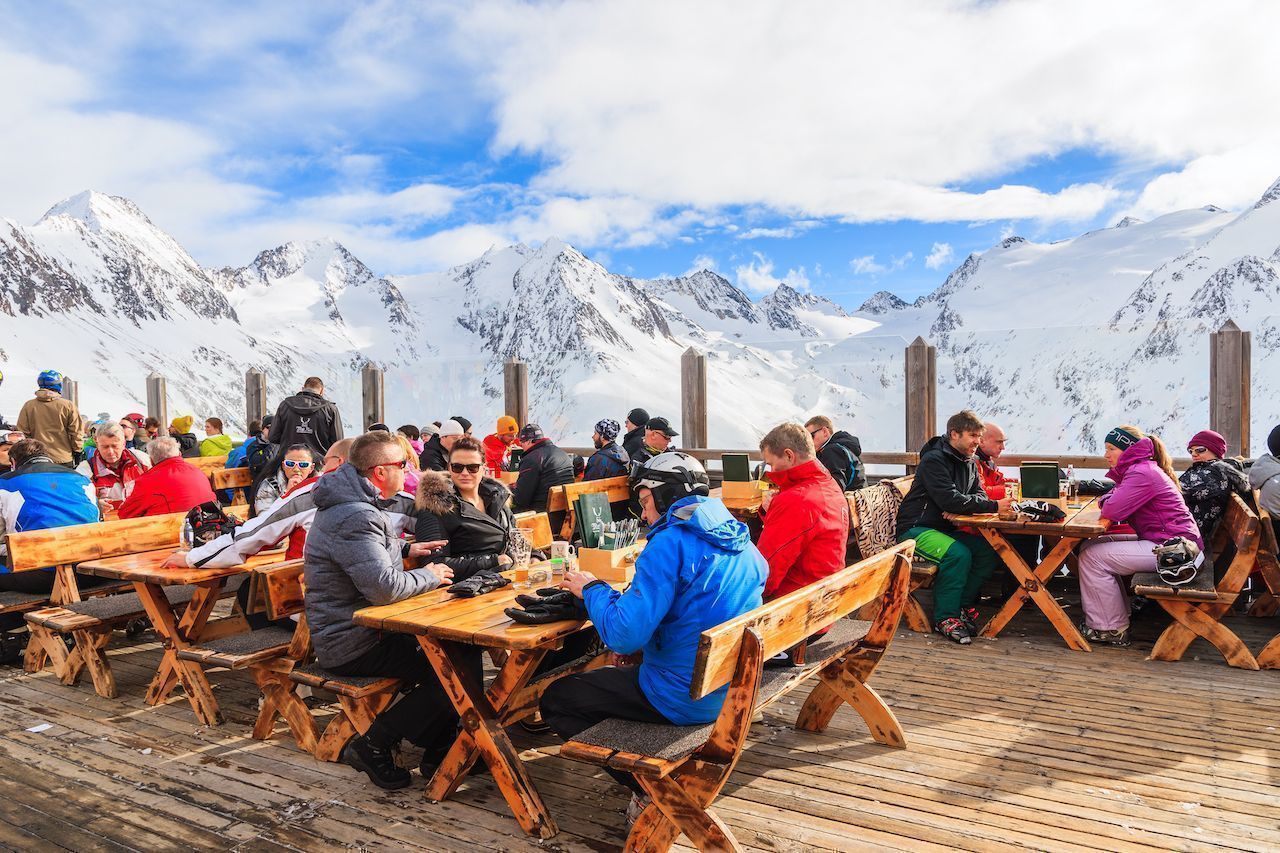 Another important factor in a skier’s environmental impact is the trash they produce during a day on the hill. Perhaps you grab a cup of water from the lodge and toss the cup away after one use, or find yourself filling up a disposable bowl with chili from the cafeteria. Bring an insulated water bottle in your backpack and fill it up instead of grabbing a plastic or paper cup. Dine at a restaurant with reusable plates, glasses, and cutlery, and if you do visit the cafeteria or a restaurant using disposables, carry your own cutlery in your backpack.

In general, draft beer is the most sustainable way to enjoy a toast at the end of the day because you aren’t adding anything to the landfill or recycle pile, provided that beer is poured in an actual glass and not a plastic cup. If the bar is serving in plastic cups, opt for a canned drink instead.

Support resorts that make reducing their impact a priority. 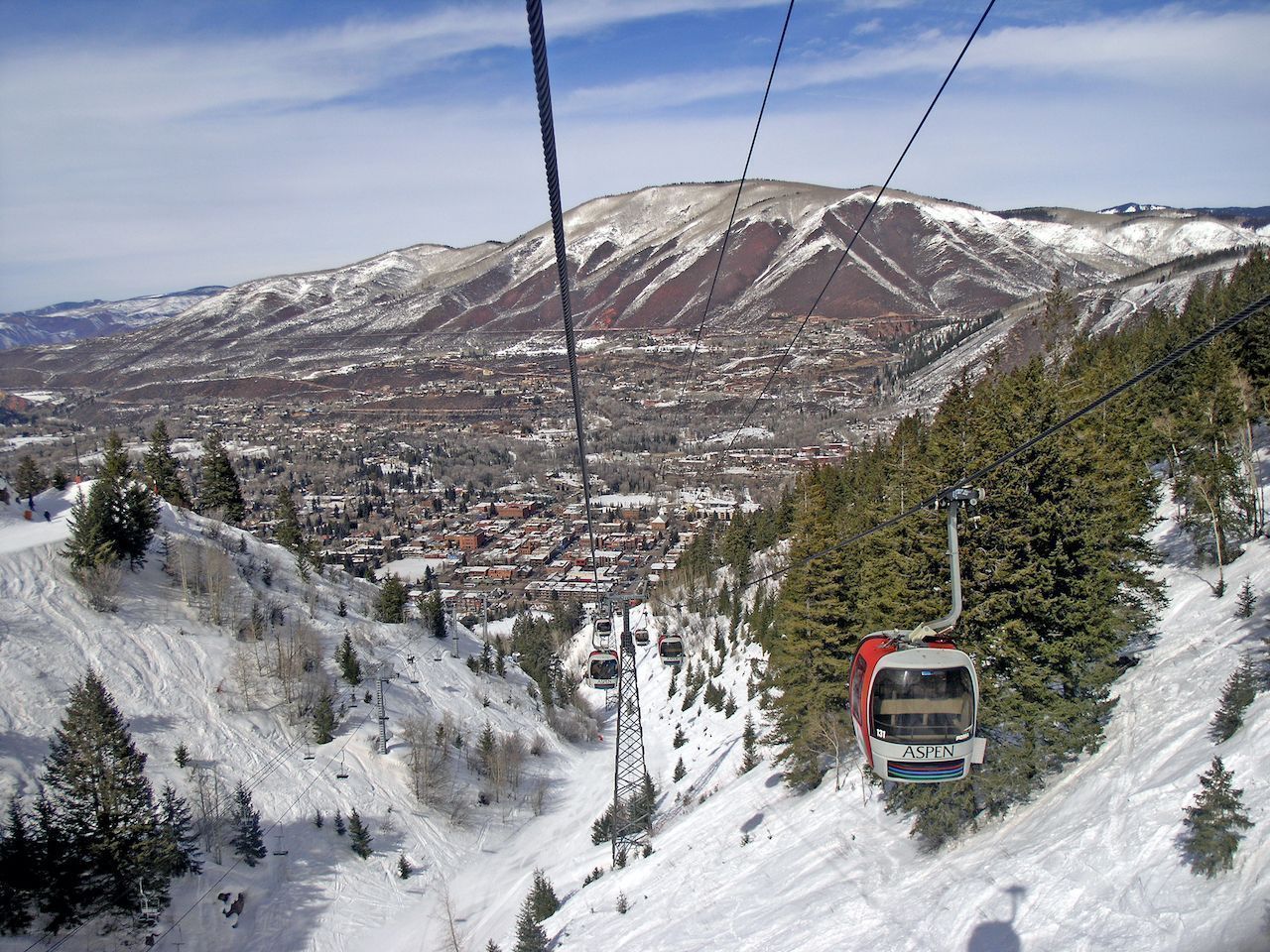 As is the case with gear, your dollar is your loudest voice when it comes to ski travel. Supporting resorts that prioritize sustainability is easier as more resorts make sustainability a public, and therefore profitable, initiative. Aspen Snowmass and Jackson Hole Mountain Resort run on alternative energy, and Arapahoe Basin has joined Aspen Snowmass in taking its economic voice to Colorado lawmakers. Sugar Bush in Vermont took over six local solar plants that actually cycle energy even beyond its resort back to the surrounding power grid.

These are just a few of the ski areas taking action, but as more visitors demand a cleaner visit, the impact will continue to spread. “Tread lightly on our playground by minimizing waste, following the principle of leave no trace, and sharing space in transportation,” says Swain. “That said, the most important action we can take as individuals is to advocate for the environment that supports our active outdoor lifestyle. Call, write, or visit your elected officials to tell them why you are passionate about protecting our playground and ask what they are doing about it.”

Ski & SnowAvalanche Risks Are Growing for Inbound Skiers. Here’s How To Stay Safe.
Tagged
Activism Sustainability
What did you think of this story?
Meh
Good
Awesome