It was sometime in March of last year. I was standing on a beach looking out onto the crystal clear water of Lake Tahoe. My brand-new Birkenstocks stood at the edge of the water, and my hand was elbow-deep in a new bag of Hot Cheetos.

I looked over at my best friend, Austen. We’re so close that it’s like we can read each other’s minds. Damn, this is a beautiful moment, her eyes said. I agreed, and then I did as most people would do in 2017: I took out my phone and snapped a photo.

However, I can never do anything conventional.

The photo had two of my fingers holding the prettiest, red-dusted chip I could find in front of the iridescent water and the snow-capped Sierra Nevada mountains behind it. It was perfect. 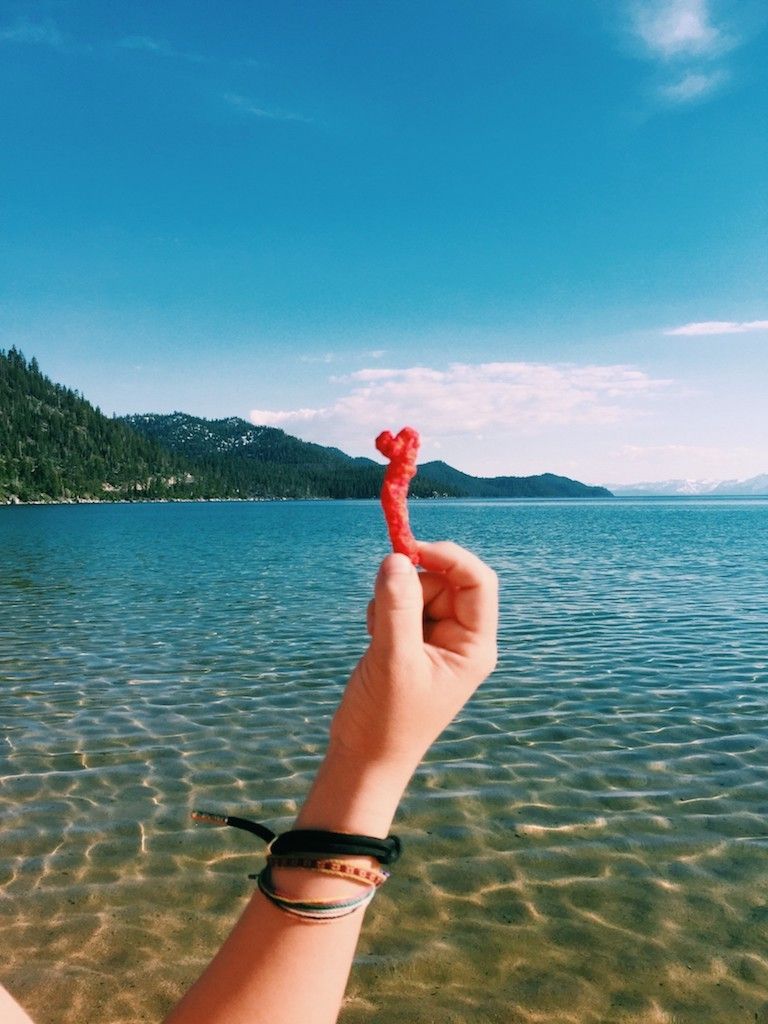 Austen rolled her eyes and laughed. “You would,” she said. She never questioned my weirdness. I loved her for it.

I posted the photo on Instagram moments later, and I was electrified about the response it got. I don’t have a large following, but the comments and reactions from my small circle of friends to this silly Hot Cheeto photo were invigorating. I was making people laugh, one of my favorite things to do. That’s when my Travelling Hot Cheeto photo series started.

I began to see the potential that my photo series would have. I could entertain, eat Hot Cheetos, and travel in the process. For me, it was a potential goldmine. I was very optimistic. At the very least, I was hoping for a lifetime supply of Hot Cheetos. A girl can dream.

***
Now, I wasn’t a photographer by any means. I had no professional training. But I liked the thought of this simple act of wandering around the Earth, finding something beautiful and uncommon, and capturing it in a unique way.

Anna Mazurak, a prominent freelance travel photographer, is similar in that respect. In fact, I’d say we have a lot in common. She’s short and hates the cold. She loves to travel and explore. She fell in love with photography while traveling in college. She calls herself a vagabond and often finds inspiration in the exciting and unique.

“I don’t like sunset photos,” she told me. “I think they’re very boring.”

Although Mazurak does not have a Hot Cheeto obsession like me, she does have her own photo series involving a traveling garden gnome. Alfred: The Globetrotting Gnome is an inspirational project I wish I would have found sooner. The premise of the series is similar to my own, a garden gnome that travels the world and stands in front of the most magnificent scenes.

It’s like Mazurak and I are soul sisters. Don’t tell Austen.

The photo series idea of mine blossomed into a mission  —  to take my Cheetos to the coolest places I could get to. I was on the hunt for beautiful, scenic backdrops for my Hot Cheeto obsession, and I had the perfect opportunity.

Austen and I were planning a road trip to commemorate the summer. Ten days in July with no expectations aside from getting on the road and seeing places we had never seen before  —  Bryce Canyon and Zion National Parks.

By the time our departure date rolled around, we had admittedly over-prepared to compensate for our procrastination. We stuffed whatever we deemed necessary into the car:  an extra tent, enough shoes for 10 pairs of feet, and an abundance of camping amenities. Austen said we packed way too many bags of Hot Cheetos. I would argue that we didn’t pack enough.

***
We left early in the morning on our first day, making our way through Nevada during the night and passing through the west side of Utah as the sun crept over the desert. We were driving through the Bonneville Salt Flats when we pulled over on the side of the road and I took my first Hot Cheeto photo of the trip. The scene was so simple and gorgeous. Pure, white, flat land backdropped by a rich, blue sky. The composition and colors were bold and brilliant. I was off to a good start. 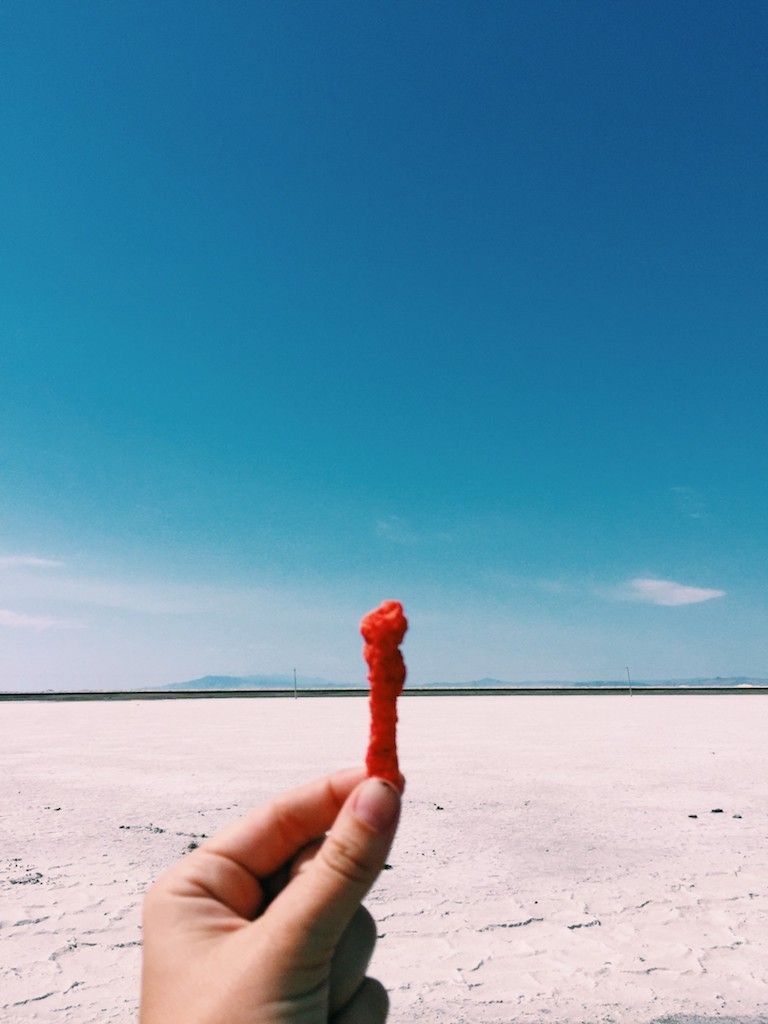 Our first overnight stop was at the Antelope Island State Park of the Great Salt Lake in Utah.

The Great Salt Lake gets its name for a reason: It’s salty as hell, and because of that, fish and most aquatic species are unable to inhabit it, aside from the brine shrimp that seem to thrive. The shoreline is usually littered with bird carcasses. The Great Salt Lake, in the middle of July, is the foulest, smelliest, rankest place in the western United States. I speak from personal experience.

“Grab the Cheetos, and let’s get the hell out of here,” Austen said.

It only took two hours before we packed up the car and headed as far away from the lake as possible, a pilgrimage in search for fresher air. We didn’t even stick around for a photo. It was that bad.

***
The second leg of our trip was longer and more exhausting than the first stretch. We had been driving for hours and hours. Austen’s eyes would fixate on the endless road ahead as I munched on Hot Cheetos and bopped around to songs in the passenger seat, occasionally napping in between playlists.

After 18 hours of travel, we finally made it to Bryce Canyon National Park. We settled into our campsite, ready to wake up early and explore the park.

Bryce Canyon is phenomenal. The explosion of color paired with the texture of the rock was absolutely stunning. As we looked out onto the canyon, the sun rays cast light and shadows over a stone forest of unique rock formations. I had found another stunning backdrop for my Hot Cheeto; even better than the last, I thought. 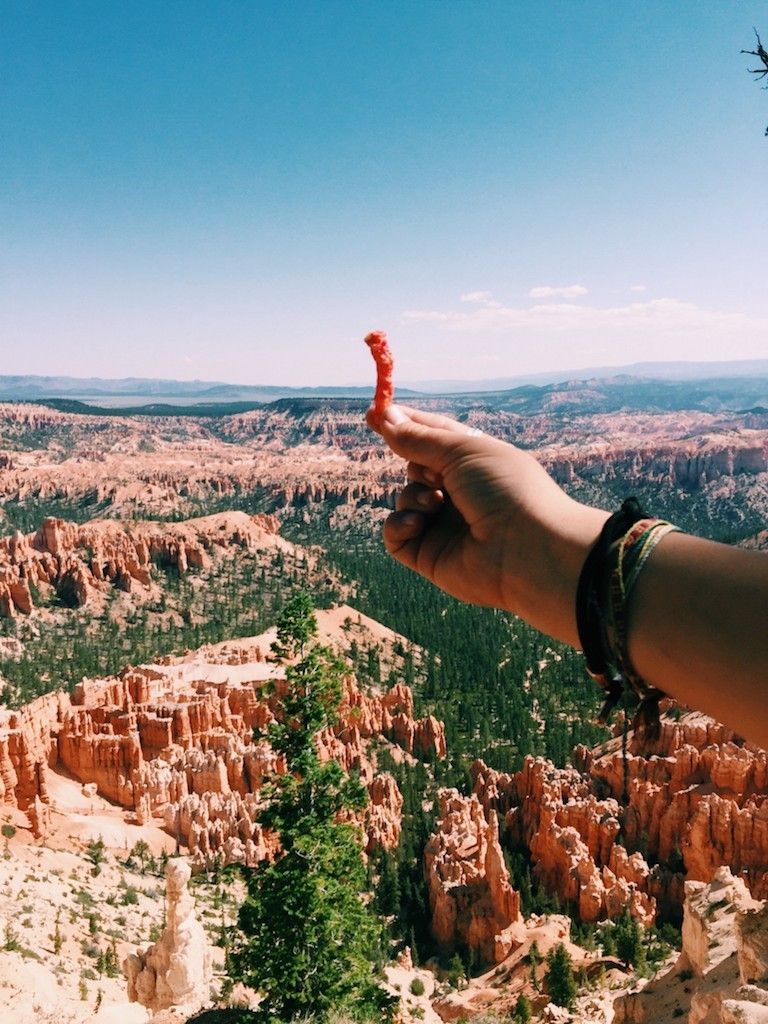 The sunlight changed the landscape by the minute. We could have spent an entire lifetime there and probably would have never captured the same image twice. I didn’t even try to. My camera quickly filled up with photos of the view, with a Hot Cheeto and without.

After two days of exploring and admiring the jaw-dropping scenes of the canyon, we packed up the car again and headed to the next stop  —  Zion National Park.

While driving through Zion, I don’t think I closed my mouth once. I was in awe. Like Bryce Canyon, it was hard to pick the perfect scene for a Hot Cheeto photo because there were too many options to choose from. We were surrounded by imposingly tall mountains looming over us, threatening to drop boulders on our heads. I had never felt so small. 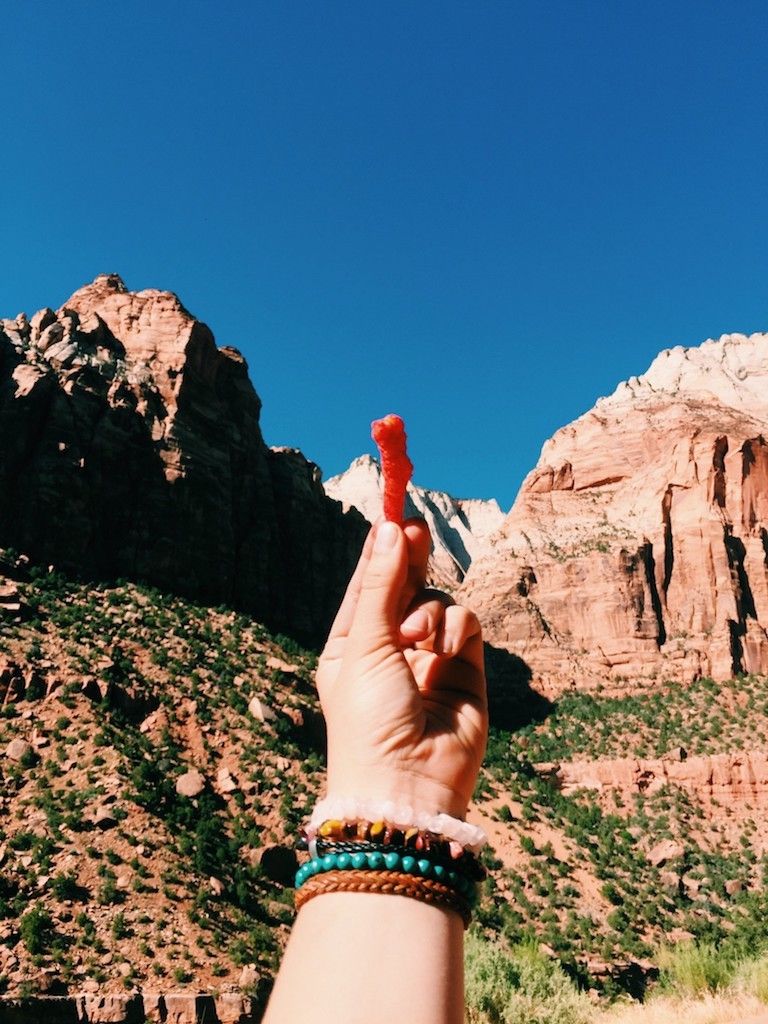 As the sun fell below the red rock, the shadows swallowed the lights of the tiny town of Springdale beneath, and we were, once again, settled into our campsite for the night, eager to explore the next day.

However, the triple-digit heat was suffocating even before the morning sun peeked over the mountaintop. In the early hours of dawn, in our tiny tent, Austen and I were careful not to touch each other to avoid pooling sweat between skin. As soon as we felt the scattered hours of intermittent sleep were enough, we packed up and left.

The heat of Utah was enough to turn us back in the direction from which we came. Although we were a few days early, we headed towards California to spend the last few days of our vacation where we knew we could relax. The California coast. Home.

***
When I look at photos from our trip, I will always remember how the air bit ever so slightly at the ends of my fingers and nose on the edge of the canyons, or how the sun kissed away the chill and lingered on my cheeks and eyelids turning everything pale gold in the valley of Zion. I’ll never forget the rancid smell of the Great Lakes or the questionable looks from fellow tourists who were curious about my obsession with posing Hot Cheetos in front of natural wonders.

I spent the rest of summer exploring and capturing my favorite kind of images. We visited the Grand Canyon, the Golden Gate Bridge, and my favorite dog-friendly beach near Half Moon Bay. 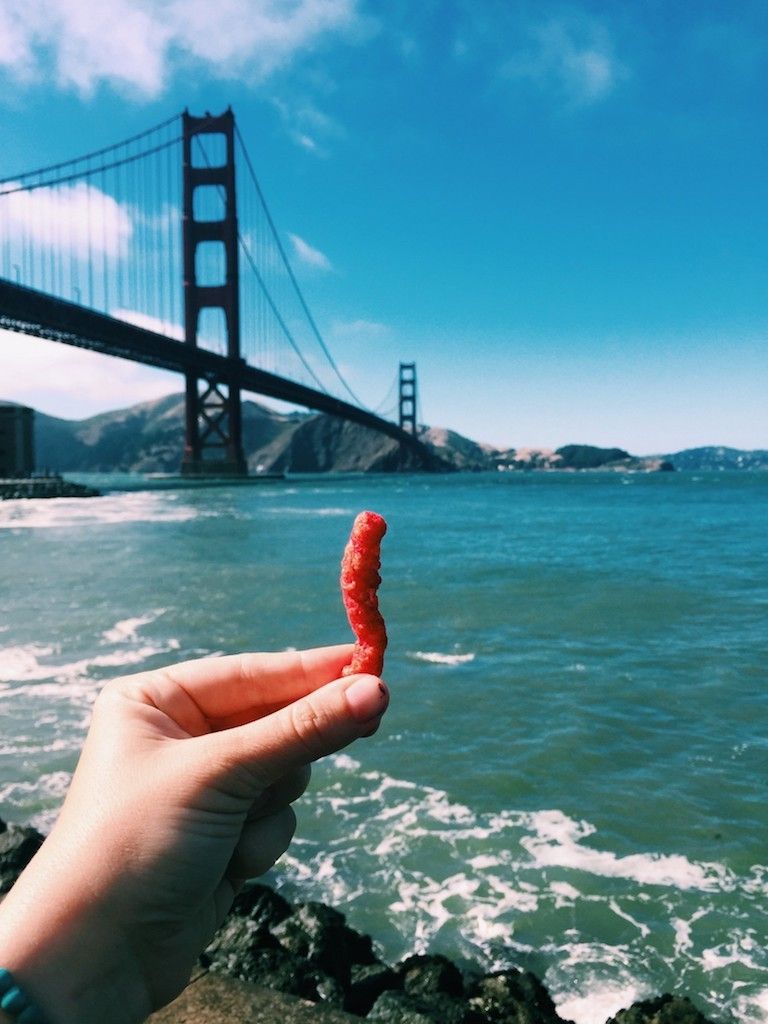 Even after the Cheeto dust is gone, I will always remember standing on my tired feet in my scuffed up Birkenstocks at the edge of a canyon, or perhaps an ocean, 26 years old, in love with the world and every rock and tree and Hot Cheeto in it. My Hot Cheetos can’t wait for the next adventure.

This article was originally published on Medium and is republished here with permission.

Trip Planning16 must-see National Parks this year
Tagged
Narrative
What did you think of this story?
Meh
Good
Awesome

Say goodbye to fee-free changes and cancellations for summer flights
7 remote, charming, and quirky Icelandic villages worth the detour
The optimal road trip to see all the US national parks, mapped
Earn $20k and a year’s supply of beer as the first ‘Champagne of Beers Region’ ambassador
A bottle of French wine aged in space is expected to sell for $1 million