With the popularity of U.S. National Parks at an all-time high, you may want to look beyond go-to destinations like Old Faithful and Half Dome for an intimate park experience. We’re not suggesting you skip these iconic sights, but maybe it’s worth planning your next national park trip around seeing one of these stunning locations instead… 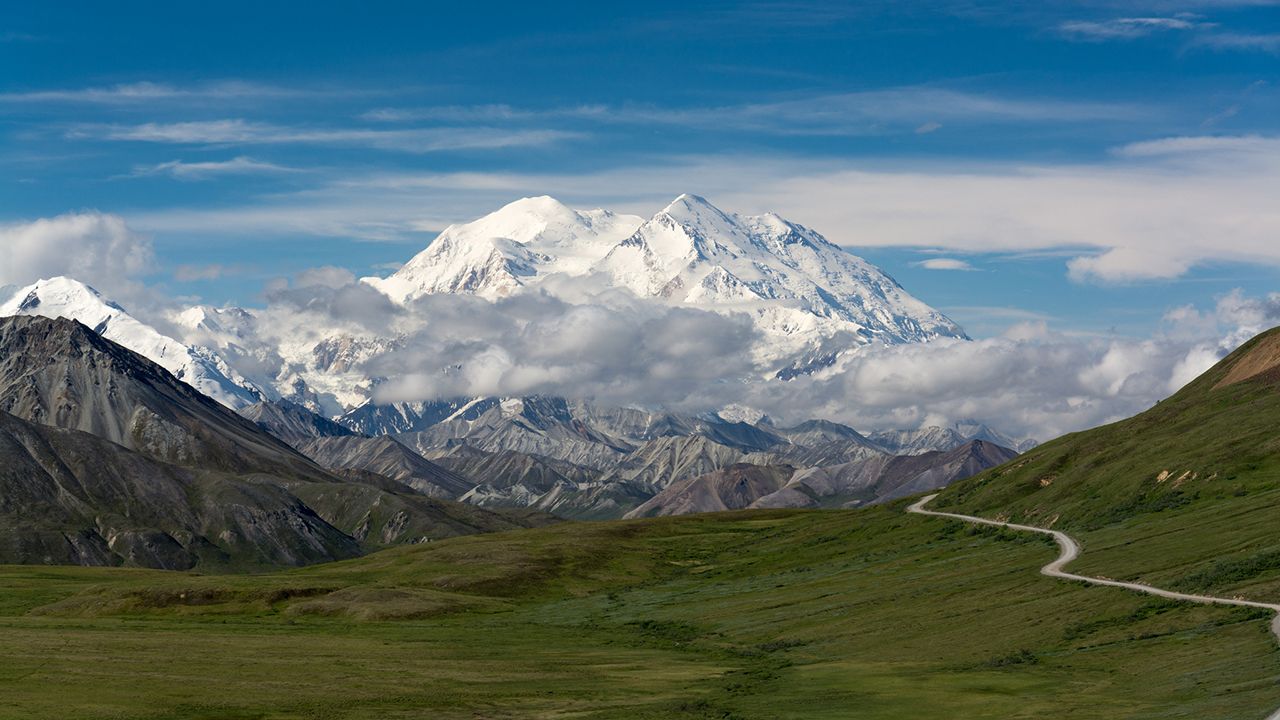 The Eielson Visitor Center in Denali National Park has an outline of Denali etched into their glass windows. That’s because The Great One is cloudy and shy during summer’s prime-visitation months. Give it a week, and on your first clear day head to Stony Hill Overlook; this is the most accessible view of North America’s highest peak.

This park captures the rare beauty of a truly wild East Coast landscape. Acadia National Park’s defining feature is the North Atlantic pounding against the rugged shoreline. To get a front row seat, try rock climbing at the Otter Cliffs. This excellent climbing area is friendly for brave beginners. Your first belay from the top rope anchor is a nerve-wracking experience, but an incoming tide instills you with ample determination.

This park is often over-looked as the above-ground attractions aren’t particularly eye-catching. However, just below the surface lies one of the greatest cave systems in North America. The Big Room is the fifth-largest subterranean chamber on the continent and visitors can spend hours wandering through the caverns exploring a whole new world beneath the desert. 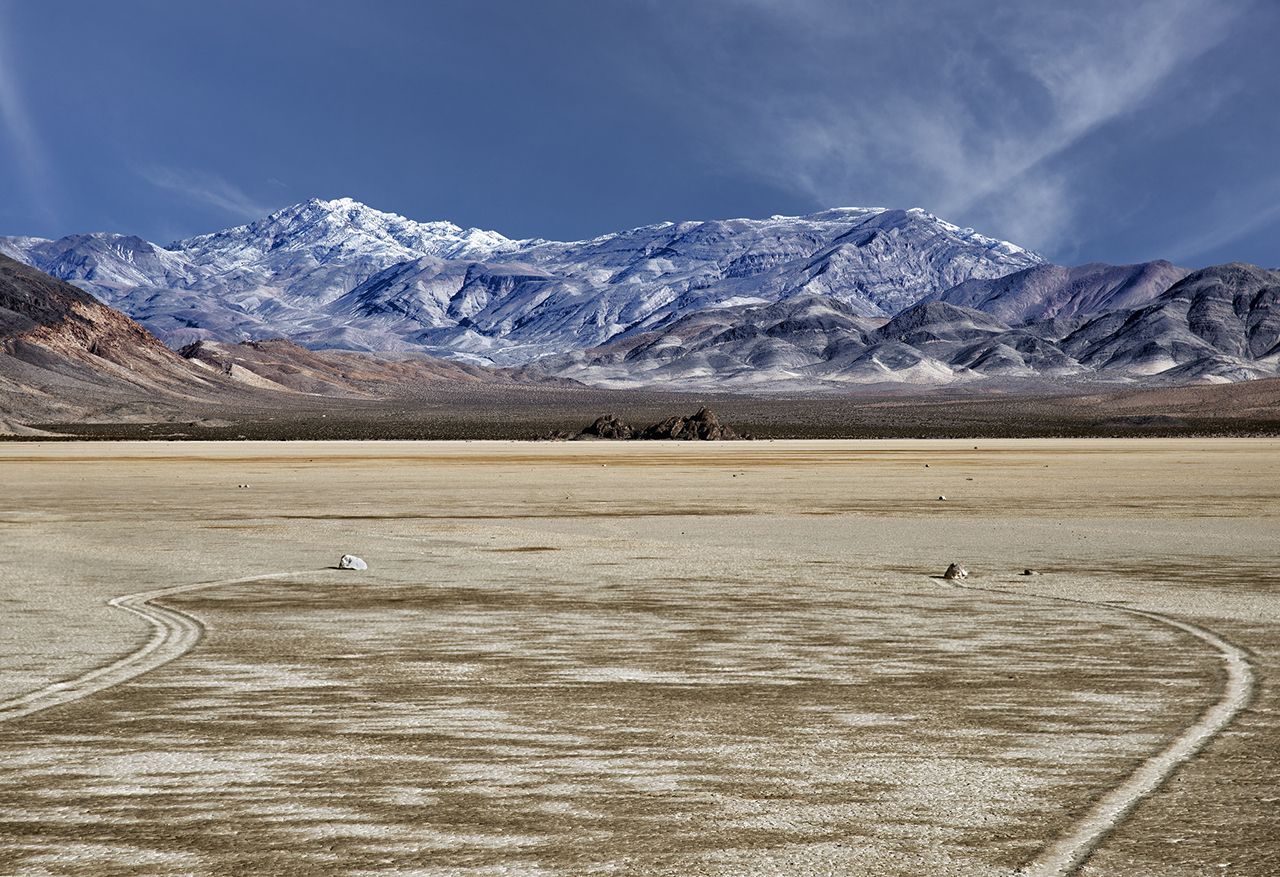 In a remote corner of the hottest place on earth is a mysterious place called Racetrack Playa. It’s a dry lakebed with infamous “sailing stones,” rocks that scoot across the desert leaving long trails behind them. No one has ever seen the rocks move, but maybe you could be the first.

Alaska does glaciers much better than the lower 48, and Exit Glacier is one of the most accessible and impressive glaciers in the state. The moderately strenuous hike switchbacks through forest and tundra, and has incredible views of the crevasses and the stunning blue chambers of ice. You’ll marvel at a glacier with a true depth still unknown, even to the experts.

The Hall of Mosses in the Hoh Rainforest is one of the most popular trails in Olympic National Park. The short stroll showcases Bigleaf maples festooned with moss, towering Douglas firs, and one of the finest examples of primeval forest anywhere on earth. Go during a fall rainstorm to see the forest in its element. 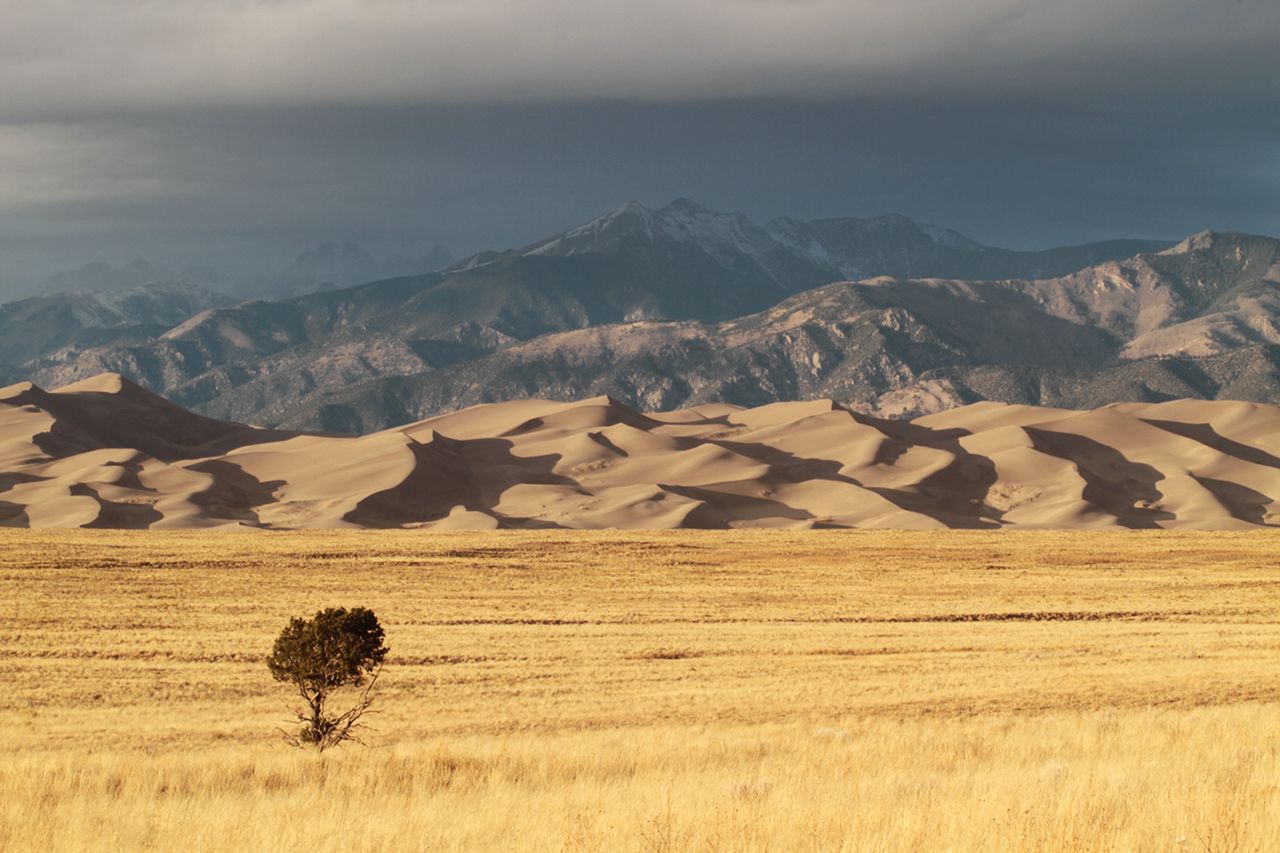 The main attraction at Great Sand Dunes is certainly the massive dune field, and among the dunes none are greater than Star Dune. At 750 feet tall, it is the tallest sand dune in North America. Hike out from the visitor center and cross Medano Creek as it snakes through its sandy channel. Then begin your climb up and up the loose sand until you reach the highest point with a dramatic view of the Sangre de Christo mountains behind you.

To escape Yellowstone’s summer tourist hordes, go in winter and seek out the most visible wolf pack in the world. The Lamar Valley has the lowest elevation in the area, so herds of elk, bison, and wolves congregate there once the snow gets deep. The road is still open, so bring your binoculars and cross country skis for an up-close view of an apex predator at work.

If you’re visiting Colorado and have 14er fever, there’s no better cure than Longs Peak. It’s the only 14er in the park, so its lofty view lords a huge panorama over the glaciated terrain of the Rocky Mountains. The hike is strenuous, exposed, and potentially dangerous, but that’s what makes the summit all the more rewarding.

The 28-mile Tuolumne Trek offers nonstop iconic Yosemite views of Half Dome, Bridalveil, El Capitan and more. It showcases why Yosemite has earned a reputation as the Disneyland of National Parks, but unlike the lower valley view, it provides a glimpse of the pristine Yosemite that enamored John Muir with its High Sierra magic away from crowds. 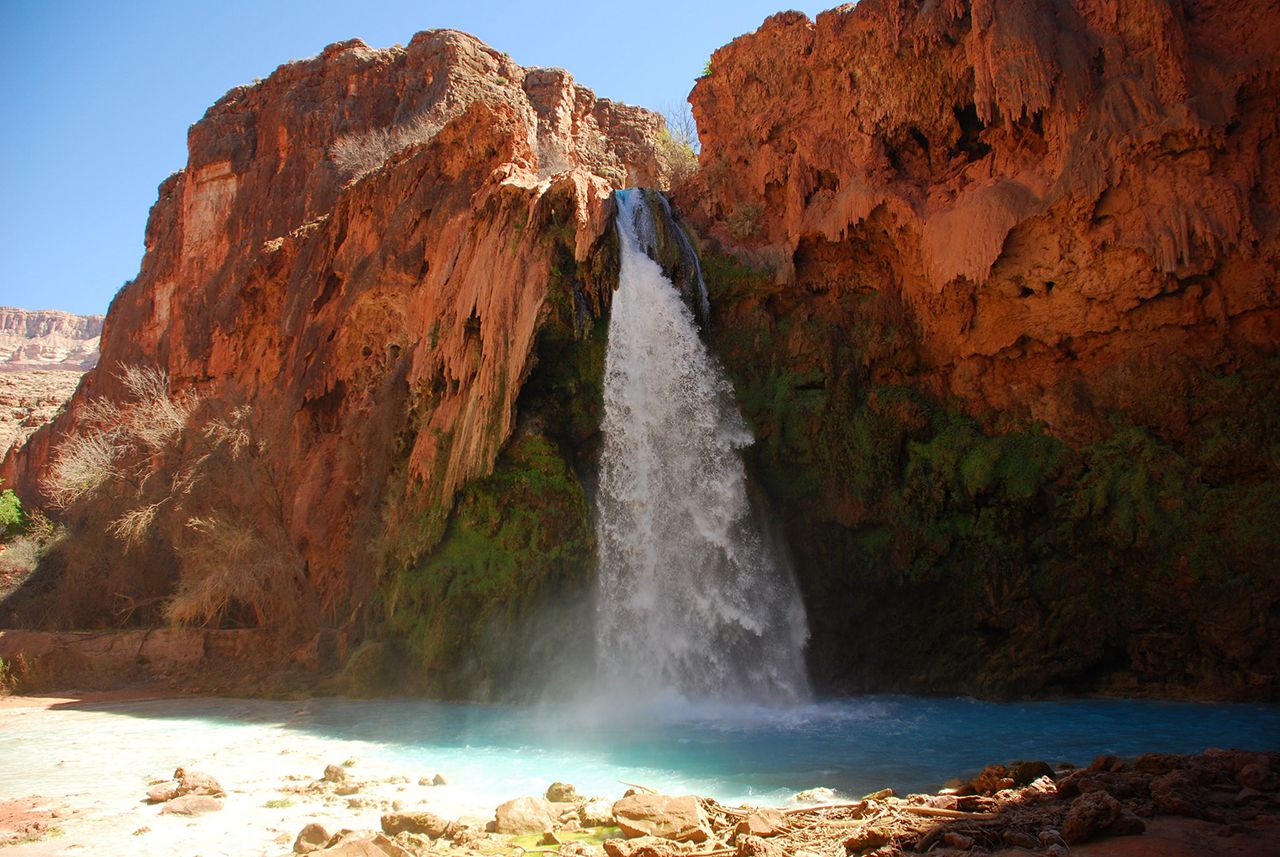 For all the dramatic views in the Grand Canyon, this is among the most intimate. Though technically just outside of Grand Canyon National Park, people are inevitably drawn to the milky blue-green water that plunges over the 90-foot Havasu Falls. Get there early for a photogenic swim in the 70-degree water flowing brightly over the red sandstone.

You’ll go for glaciers and be awed by waterfalls, but what you really need to see is Triple Divide Peak. Yes, it requires backpacking; and yes, it requires a scramble up a shale gully, but the rewards atop can’t be overstated. It’s the only place in the United States where water drains into three oceans—the Atlantic, Pacific, and the Arctic via Hudson Bay. Pour a drop from your bottle on the summit and speculate which ocean it will fill.

You can see the summit of Mt. Rainier on every license plate in Washington State, but there’s no better view of the peak than the 93-mile Wonderland Trail that circumnavigates the mountain. It’s great to do a multi-day trip, but if you want to bite off a day-hike, try the 9-mile Fryingpan to Indian Bar section. It’s like a Rainier greatest hits album that rocks waterfalls, alpine flowers, high views, and glaciers galore. 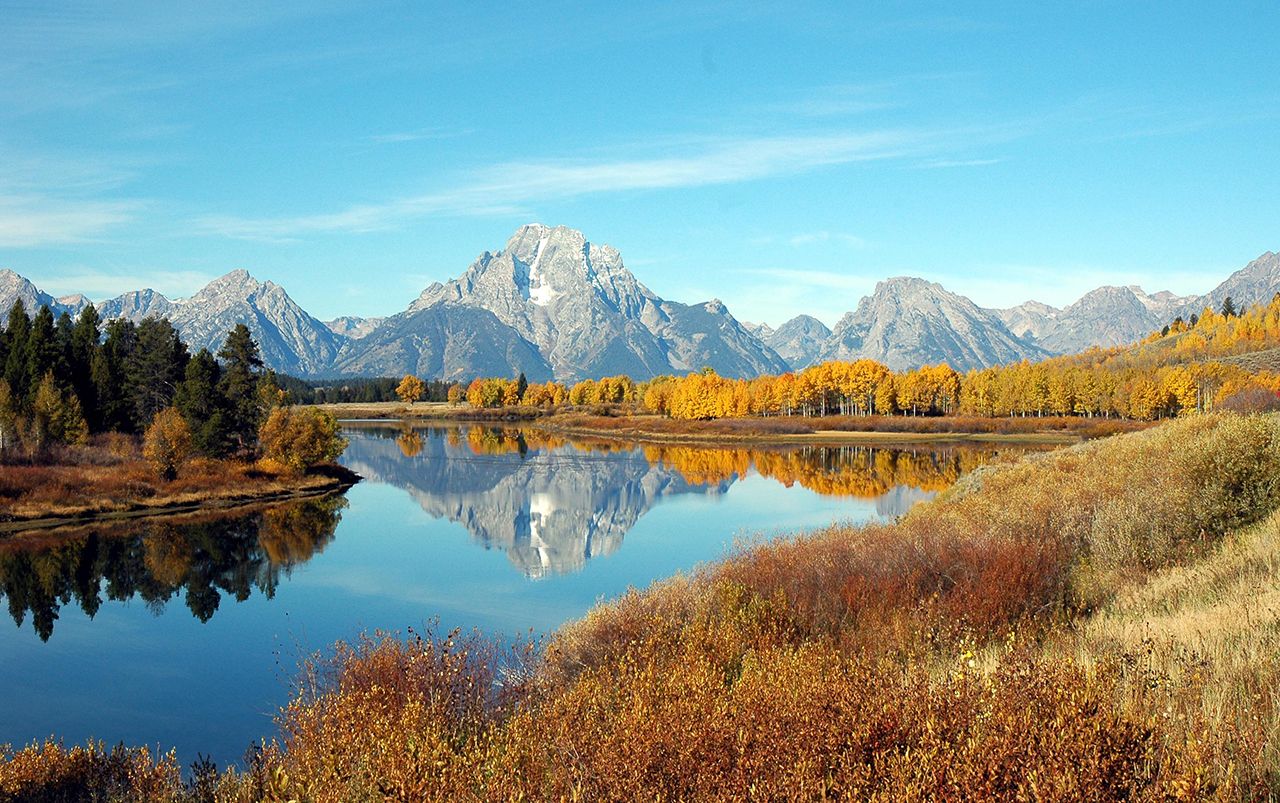 The Grand Teton is one of those mountains that seems like it was shaped by an artist rather than geologic process. If you think it looks impressive from the valley, try the view from its summit. The Owen-Spalding Route doesn’t require ropes, but is still very exposed. Hire a guide, and claim the best view in the Rockies from the top of its prettiest peak.

Capitol Reef is lesser known than its neighbors Arches and Canyonlands, but if you’re looking for slot canyons, arches, and few crowds, then this is your place. Halls Creek Narrows has everything you want. Located on the southern end of the park, driving there can be a dusty adventure, but you’ll be glad you did when you’re swimming, scrambling, and trekking through this remote, lightly traveled slot canyon.

For a window into our universe, step into Great Basin National Park on a clear and moonless night. Thousands of stars, five of our solar system’s eight planets, meteors, satellites, and galaxies all spin overhead with stunning clarity. It’s remote and dry so the stars truly shine to the naked eye in one of the darkest skies in America.

Tagged
Trip Planning United States
What did you think of this story?
Meh
Good
Awesome