“I travel all the time. I know how to handle myself on planes and not be that annoying passenger. Trust me.”

If you’ve ever uttered the above sentence, or something like it, I’ve got news for you: You have been “that annoying passenger.” We all have, and we can’t help it. Planes are cramped, uncomfortable spaces that tap into the darker elements of our human nature: the selfish instinct to put our own needs first while subconsciously turning a blind eye to how our actions impact others.

Many travelers have the best intentions. No one takes their seat thinking, “I can’t wait to fall asleep and drool on this total stranger’s shoulder.” But when the seatbelt sign goes off, flight attendants buckle in, and the next meal service is an eternity away, passengers are left to their own devices and it’s not pretty. Like any recovery process, the first step is identifying the problem. These are the airplane etiquette rules you’re probably breaching without realizing it.

The airplane armrest is the ultimate battlefield for passive aggression. Being an armrest hog is a bad way to endear yourself to your neighbor, but if you relinquish your rightful territory without a fight, you’ll regret it until you land. Luckily, the solution is pretty simple: Your armrest etiquette depends on which seat you happen to be sitting in.

The aisle and window seats are prime real estate. They have additional space to stretch out, rest your head, or enjoy the view. They’re basically the airplane version of a high-rise apartment, while the middle seat is the slums. That’s why the middle seat gets both armrests. It’s really the only consolation for the crushing shame and discomfort of being a middle-seater. So be a good neighbor, be charitable, and let the person in the slums have both armrests. It’s the least you can do.

Is it acceptable to recline your seat? It’s a classic, perennial debate as old as the airplane itself. This question isn’t as black-and-white as it may seem, since there are varying angles of reclining and some are more acceptable than others. The chief problem is that there are rarely repercussions to egregious reclining. Unlike the quiet battle for the armrest, you never have to look at your victim, and you may very well not see their face the entire flight. Unless the person being leaned back on is especially assertive (or in a really bad mood), they probably won’t even express their frustration — they’ll just quietly stew with hatred and maybe “accidentally” whack you with their backpack while deplaning.

The key to mastering a respectful recline is spatial awareness. How much room do you actually need to recline? Does your head need to be in the lap of the guy behind you to feel relaxed, or will just an inch or two do the trick? For every inch you recline, that’s one more inch of space you’re taking away from the person behind you and one inch closer their TV screen just got to their face.

Betty Thesky, a long-time flight attendant and host of the Betty in the Sky with a Suitcase travel podcast, witnesses this airplane faux pas every day. “It would be kinder not to put your seat all the way back,” she tells Matador Network. “Just put it partially back so it doesn’t infringe on people’s space and they can still have meals.”

So there you have it. Feel free to recline, just be aware of space, don’t get greedy, and take a peek behind you to make sure your unsuspecting victim isn’t in the middle of a meal. 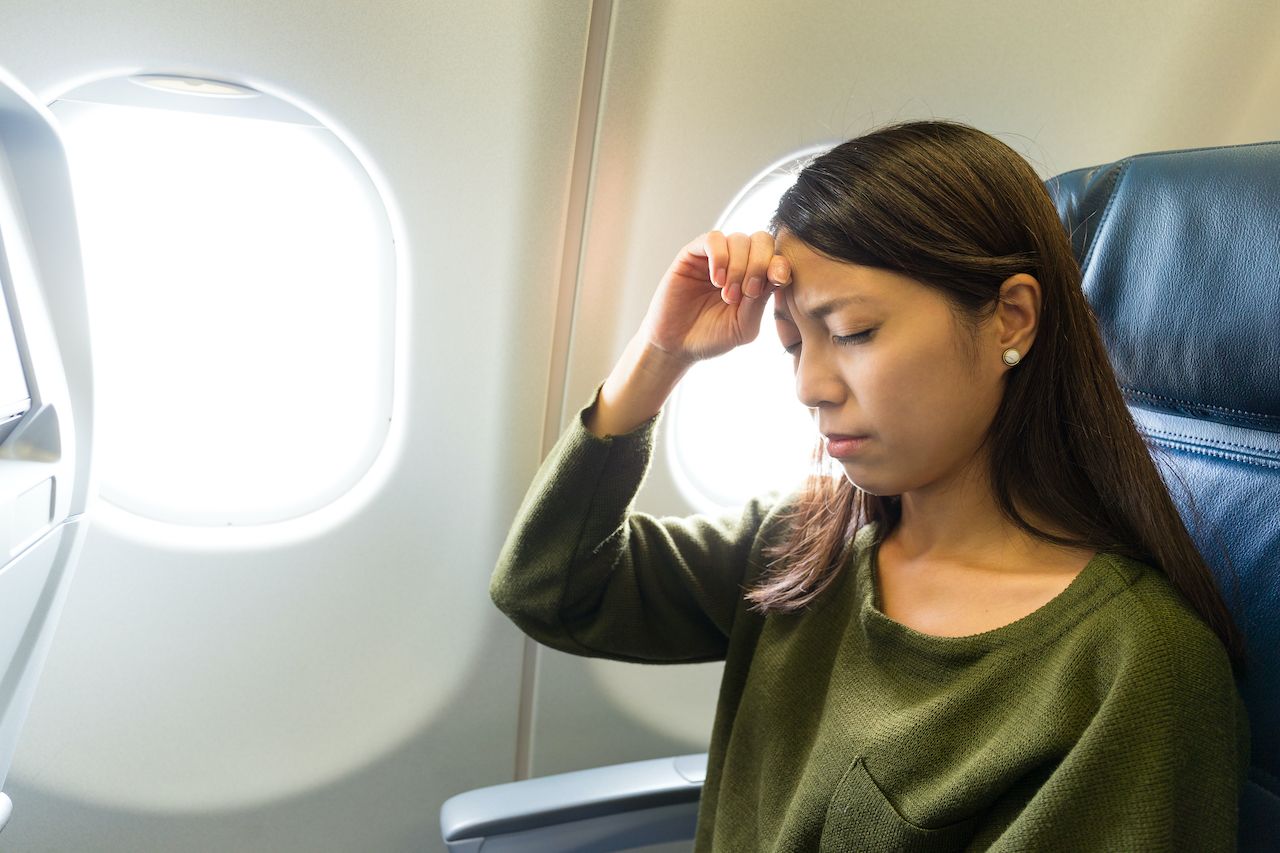 While it’s standard practice to keep your window shade open for takeoff and landing, the rest of the flight is a free-for-all. The window-seater holds all the power here. It’s an almost godlike responsibility: To bathe the plane in light, or submerge it in darkness?

Keeping the shade open during takeoff and landing is both expected and polite, so those around you can glimpse the view if they wish. Keeping it open during the flight, however, is a bit more controversial. Even if you personally enjoy looking down at the clouds, there’s a good chance people are trying to sleep, and the bright light could be hampering their efforts — not to mention creating glare.

“During the day it can be bright in people’s eyes,” Thesky says. “Passengers often ask flight attendants to shut it because they’re too shy to ask the person themselves, or they aren’t sitting in the same row.”

Thesky also says that the issue can get so contentious that passengers nearly come to blows.

“One time,” she says, “there were two men sitting next to each other. One wanted it up, one wanted it down, and they got very animated about it — and I had to play kindergarten cop. It’s just a window shade for goodness sake!”

So play it safe and shut the blind when you’re inflight. You’re really not missing anything. It’s certainly better than squabbling with your neighbor over a 2×4 piece of plastic.

Taking your shoes off

Here’s one we can all agree on — or so you’d think. The idea of sitting next to a stranger’s bare feet in an enclosed space for 12-plus hours is absolutely revolting. On the flip side, however, the prospect of sitting in an enclosed space for 12-plus hours with your bulky shoes, and no way for your feet to breathe, can be equally revolting. Unfortunately for your feet, the best etiquette is to keep those shoes on.

According to Betty, “The thing that bothers us is when people walk into the bathroom barefoot. Socks are fine.”

I’m sorry, but if you’re walking into an airplane bathroom in your bare feet, you’re either a baby or a sociopath. Socks are the happy medium here. Socks are the answer. Socks won’t offend anyone, except maybe those truly committed to the barefoot lifestyle.

Arguably the most ubiquitous breach of etiquette happens before you even get on the plane. You know the drill. It’s an hour until takeoff, the VIP boarding groups haven’t even been called yet, but 70 people are crowding around the gate like it’s a Best Buy on PS5 launch day. This phenomenon is derisively known as “gate lice.”

After waking up early to get to the airport, clearing security, and finding the gate, people are anxious to progress to the next step — boarding. Each stage of the airport process is like a new level in a video game in that we crave the next level and enjoy the dopamine hit of getting there. The final stage of the airport, the final level, is getting on the plane, and sitting around idly staring out at the tarmac just isn’t gonna cut it. Standing at the gate is proactive. It’s an outlet for our restlessness. It’s an understandable symptom of herd mentality. Unfortunately, it’s also really bad etiquette.

Being one of the gate lice is obnoxious both to other passengers and to the flight crew. If you’re in boarding group B but a bunch of gate lice from boarding group D are hanging around the gate, it creates confusion about who, exactly, is supposed to board. The issues aren’t just on the passenger side, either. According to Thesky, “People are understandably anxious to board, so they all congregate around the gate. This makes the gate agent’s job tougher, though, because there’s a wall in front of the gate.”

Think of it this way. Crowding the boarding gate is like showing up at the Chick-fil-A drive-thru at 7:00 when you know it doesn’t open until 8:00. No matter how early you get there, you’re not getting your waffle fries until 8:05.

The real heroes of the airplane aren’t well-behaved passengers, they’re the flight attendants who play kindergarten cop. If a flight concludes rather smoothly, without any incidents of violence or vomit, it might feel like the flight attendants had an easy day. That’s not entirely true. What you might consider standard passenger behavior can actually be a point of irritation for flight attendants, who aren’t even free to express their frustration.

According to Thesky, one of the most common accidental breaches of airplane etiquette is when passengers don’t adequately prepare for the flight.

“Passengers don’t consider what they need for their flight beforehand, and it’s all up in the bin,” she says. “So you’ll have one passenger going for the bin five times getting chargers, books, who knows what. And sometimes they don’t even close the bin. One guy seriously hurt himself by standing up and bashing his head off a bin that hadn’t been closed.”

It might seem like no big deal to keep a book in the overhead bin, especially if you’re in the aisle seat, but it can seriously complicate the lives of the flight attendants who need to move down the aisle without obstruction. 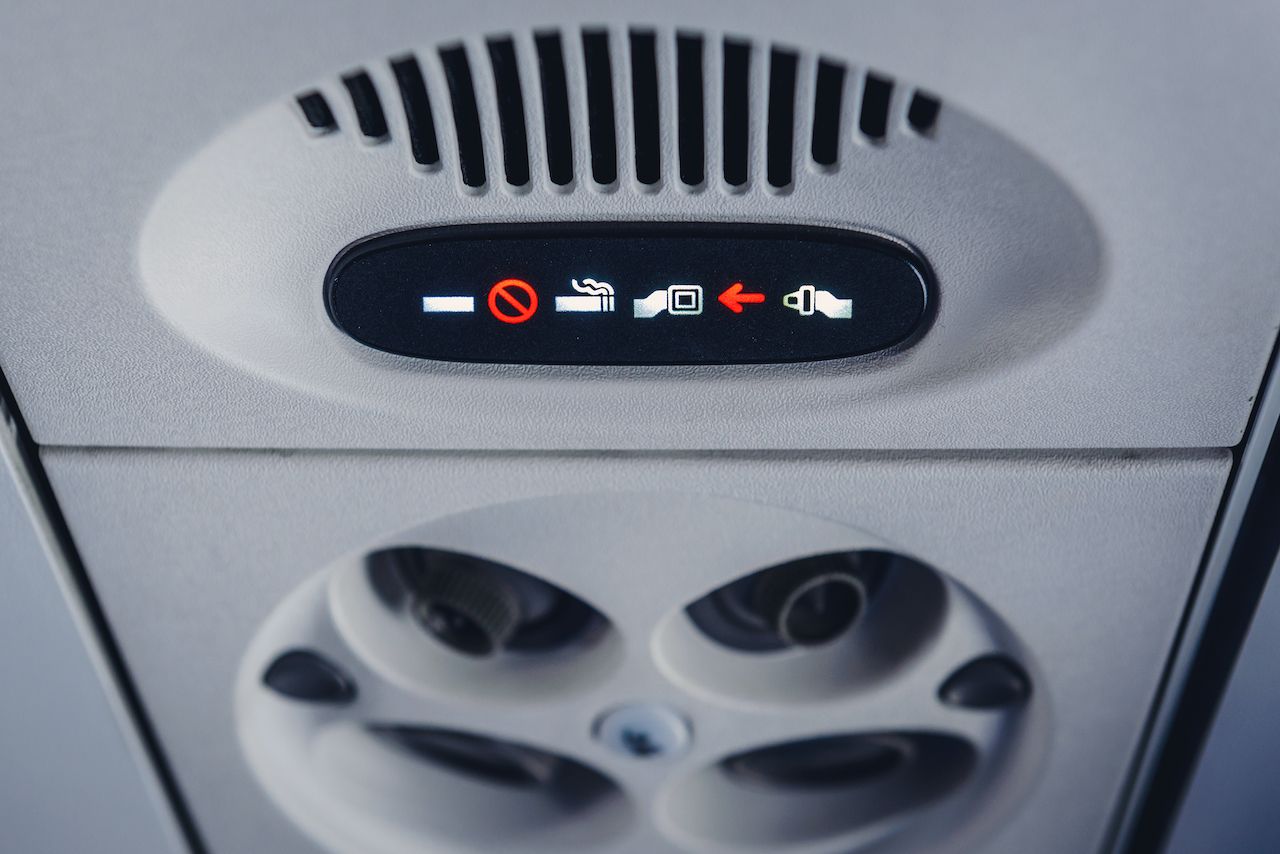 This little red light often feels like a guideline more than a mandate, especially when you see people up and about when the light is on. Flight attendants don’t always enforce this rule, depending on the severity of the turbulence, but know that they’re definitely giving you a death glare from the galley. The seatbelt sign isn’t a totalitarian method of control. It’s for your own safety.

“People actually end up in the hospital sometimes,” Thesky says. “The light is on for a reason. When I tell someone to take their seat and they tell me ‘I’m going to the bathroom,’ I’m thinking, ‘Well of course you are. Where else would you be going? You still gotta sit down.’”

Not wearing a mask

None of these faux pas can compare to the largest (and newest) etiquette battle in the skies these days. All major airlines mandate masks to protect passengers against the spread of COVID-19. It’s not only for your own good, but for the good of your seatmates, flight crew, and everyone else on the plane. Still, a startling number of people refuse to wear masks, or forget to reapply them after eating.

According to Thesky, it’s the single biggest issue on flights right now.

“It’s become a giant chore,” she says, “like we’ve become the mask police. I never signed up for that. People always get upset about other passengers not wearing a mask, and ask us to do something about it. On my last flight a flight attendant told a passenger, ‘You need to have your mask while talking to me,’ and the guy literally said, ‘I’m a lawyer, I’m gonna sue you.’”

Sure, you could be the guy threatening to sue a flight attendant for asking you to wear a little piece of cloth on your face, or you could be a decent human being. This one’s not even about airplane etiquette, it’s about not being a walking public health hazard.

Upholding your end of the relationship is easy. When in doubt, don’t give them a battle to fight.

Airports + FlyingFlight Attendants Confess Things Like Sex on Planes and Watered-Down Drinks in a New Survey
Tagged
Airports + Flying
What did you think of this story?
Meh
Good
Awesome