The Tour de France is often dubbed the most prestigious and the most difficult multi-stage bike race out there. Because of this exceptional reputation, it one of the most-loved sporting events for amateur cyclists around the world. Every year, for three weeks in July, cycling fans everywhere gather in front of their TVs and along the scenic route of the Tour de France to cheer the athletes who pedal up mountain passes at unbelievable speed and with incredible stamina. But with a bit of training and with the great advice from our expert cyclist Jean Gibaud, you too can cycle some of the stages of this race.

The amateur’s guide to biking the Tour de France’s most famous routes:

The route of the Tour de France changes every year, but some stages — mainly the mountain stages — even if not all included in every year’s route, are legendary.

It is tradition for the Tour de France to end in Paris, on the famous Champs Elysées avenue. But, even though it’s fun to imagine yourself cycling the last stage of the race in the capital, we don’t recommend it for several reasons:

Get ready to pedal

If you want to try to bike some of the Tour de France’s stages, you need to train. Gibaud recommends that you start cycling 300 km (186 miles) per week, 6 months before you tackle any mountain stage. If you can’t cycle outside in the winter, he suggests you get a stationary bike and/or start cross-country skiing several times per week. It will help you build up the stamina and physical strength you need for cycling much better than running on a treadmill.

If you want to cycle the stages nice and slow, you may not have to train as much, but it is recommended that you practice regularly nonetheless. The Tour de France is not a light undertaking.

When to try to cycle the Tour de France route 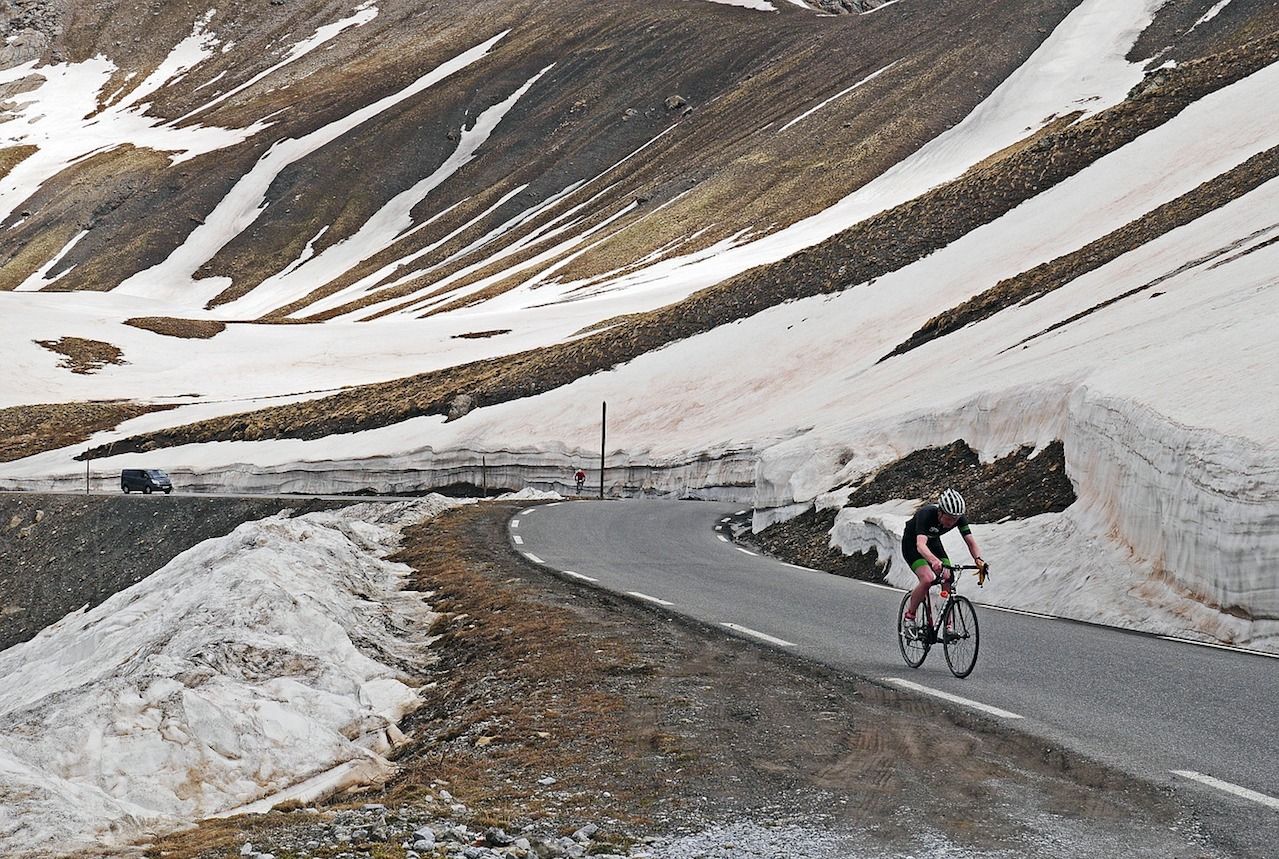 The winter months are out of the question since the mountain passes are closed, snowed in, frozen, or all the above.

Because July is when the actual Tour de France is happening, you shouldn’t try cycling the stages at that time. If that’s the only time you can take on that challenge, make sure to check the Tour’s route and dates beforehand to make sure the roads are open and accessible.

In August, the weather in the southern half in France is very hot, so exerting yourself on a bike for hours on end is not the best of ideas.

Gibaud recommends you schedule your trip for late April, May, or June. The weather is good, but not too warm, and you’ll avoid the crowds. Note that the month of May has many public holidays, so plan your trip around these if you don’t want to be riding with hundreds of others and be surrounded by cars.

What you need to take with you on your bike 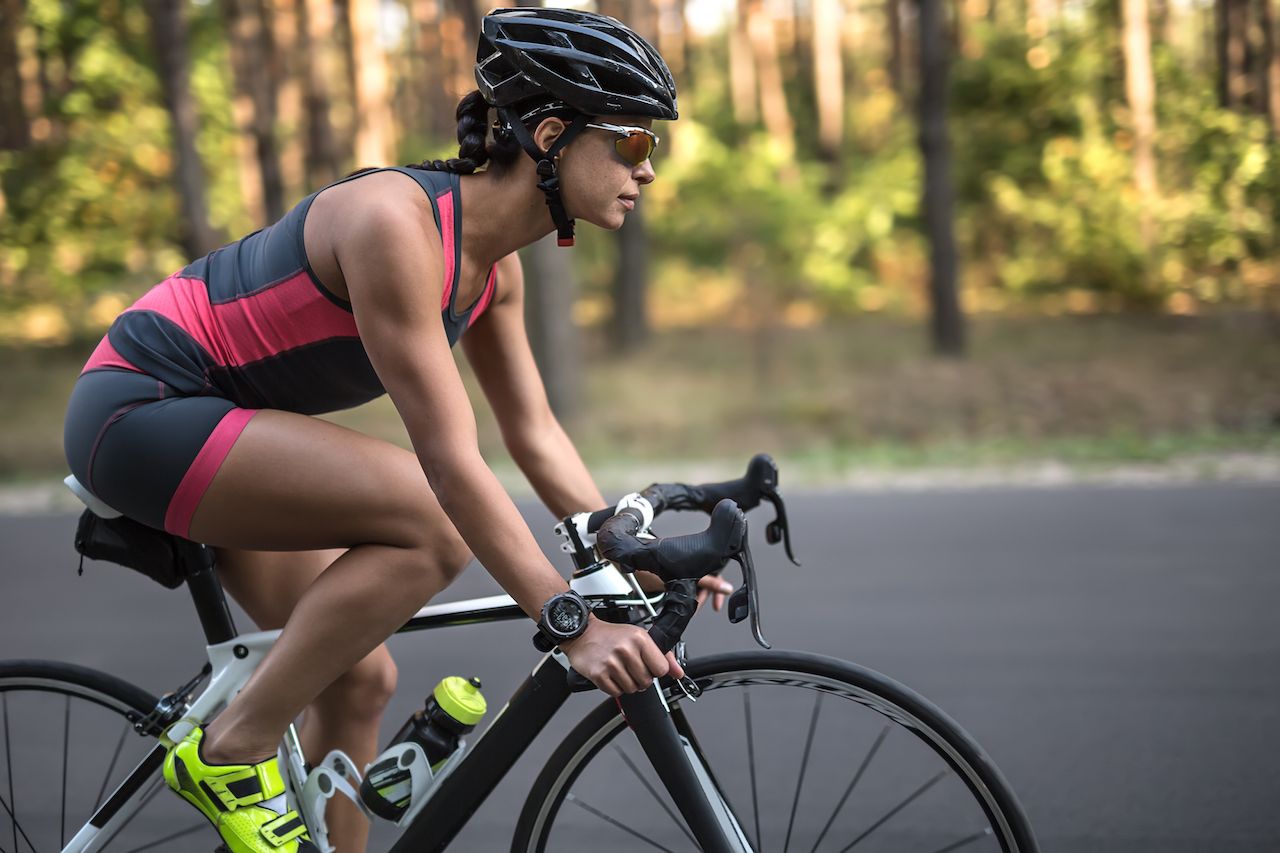 What you need to do before a stage

Cycling alone or with others 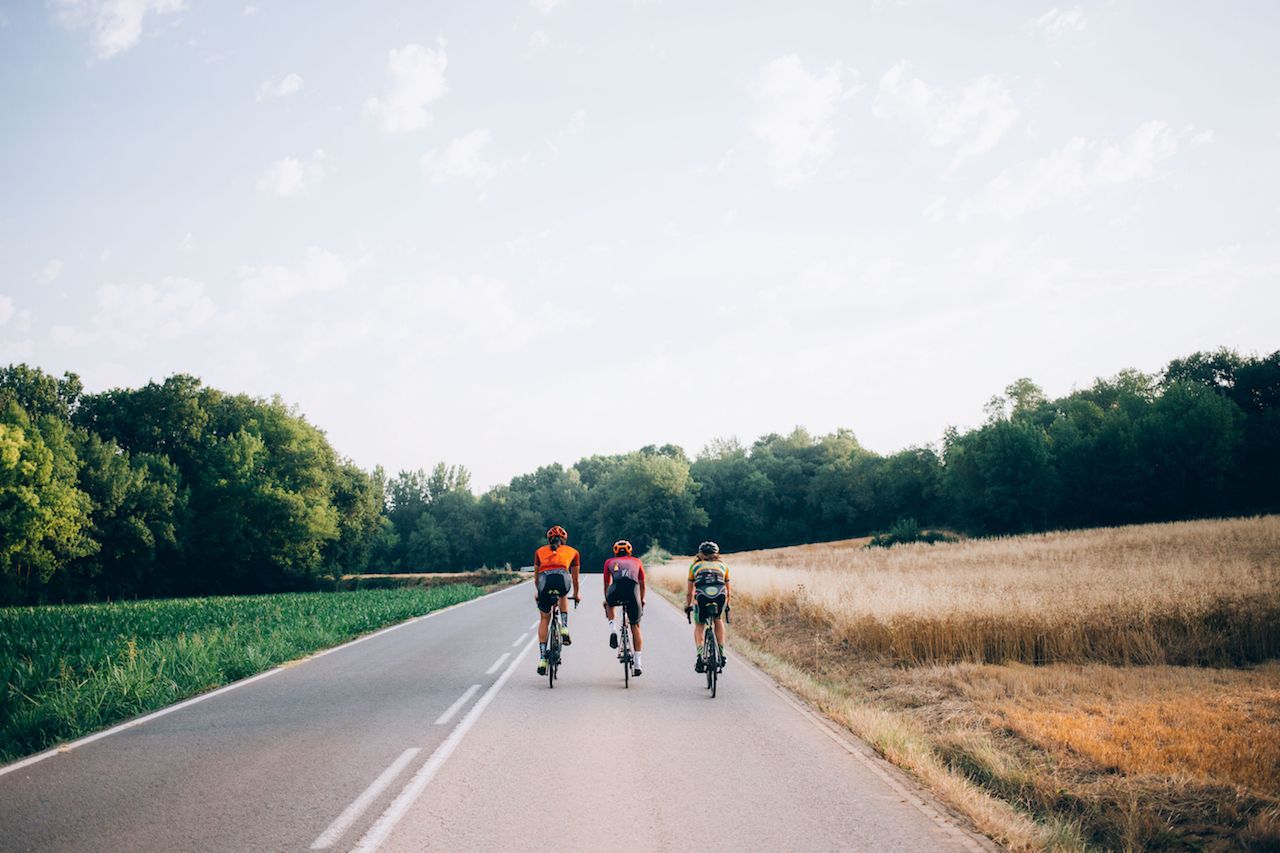 Cycling with a group helps you get motivated, but it also make things easier when it comes to dealing with the wind. Cyclists ride in a single file and rotate their positions regularly so it’s not always the same person who stays at the front to handle the wind and protect the rest of the group that follows close behind.

If you’re cycling alone, note that it is very bad form to just stick close behind someone to avoid to deal with the wind. Just say hi, introduce yourself, and rotate your position with that person when need be — it’ll be easier to cycle for the both of you and you’ll make a friend. 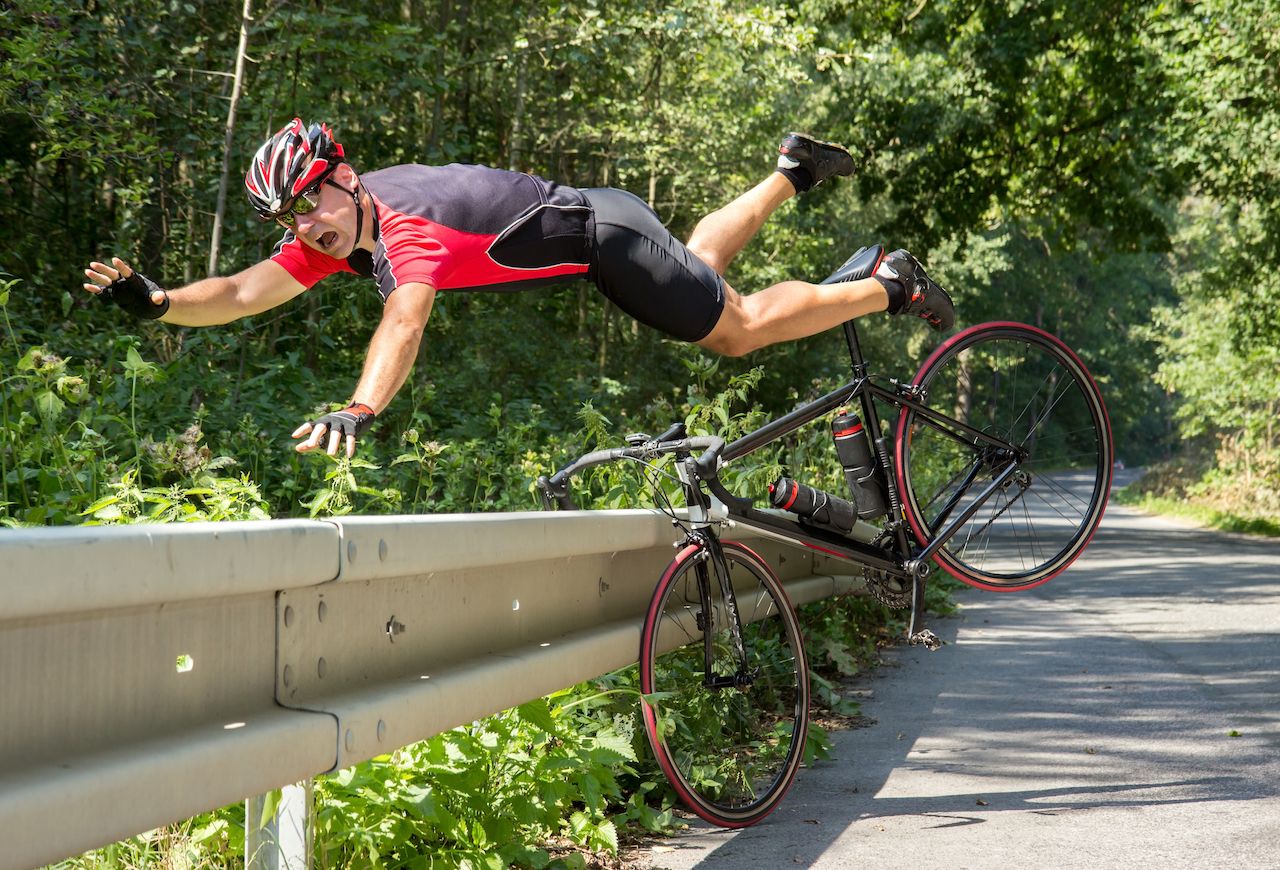 There are many mountain passes made famous by the Tour de France. Here we selected four of them in four different area of France for you to enjoy the diversity of the country’s landscapes and do some traveling in between the climbs. 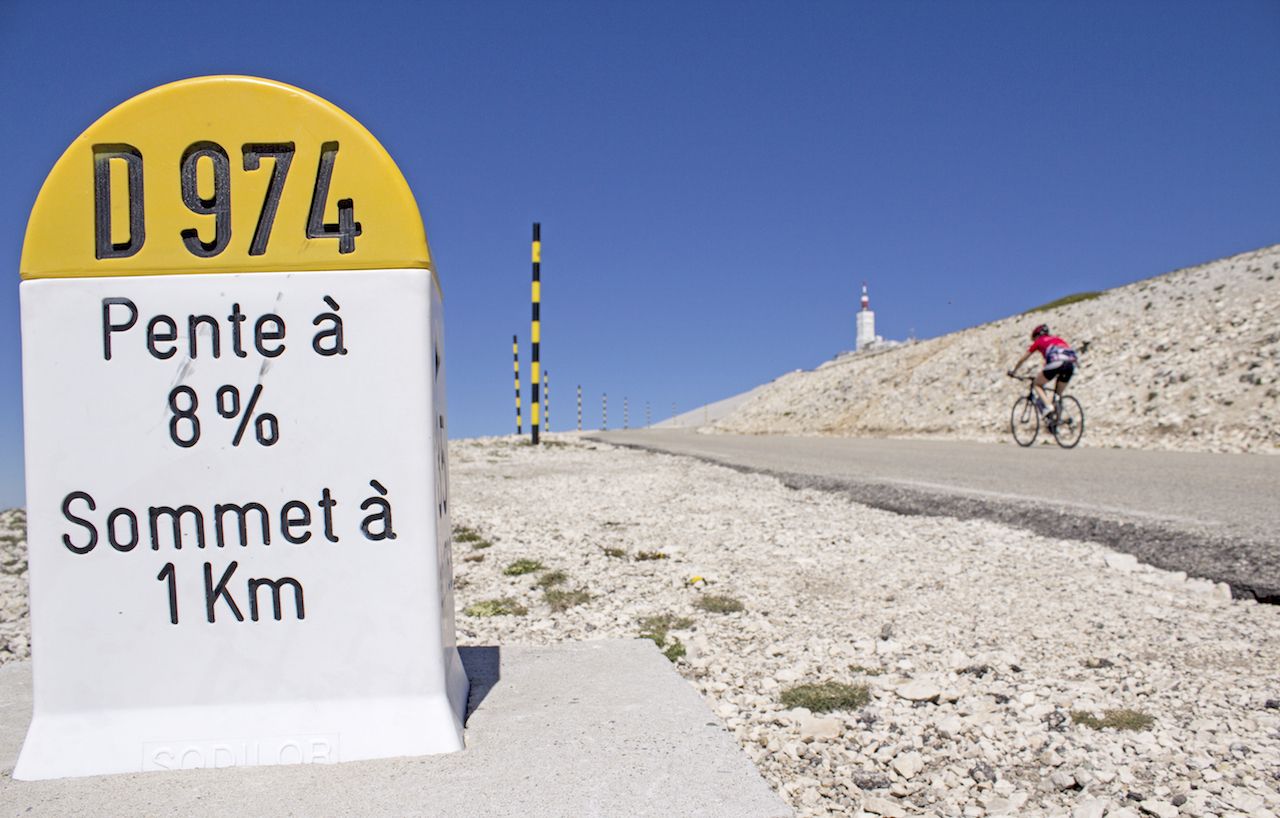 Although it’s been chosen only 16 times to be featured in the race, the Ventoux, also known as the Giant of Provence, is one of the most famous mountain passes of the Tour de France.

Even the best cyclists in the world dread this mountain. It is a 21.5-km long (13.3 miles) and 7.6 percent average climb, so you better have trained before you decide to cycle all the way up there.

There are three roads that lead to the top of Mont Ventoux: from the south, the north, and the east side. If you want a challenge, we recommend the southern side that starts in the town of Bédoin where you’ll cycle between vineyards and orchards at first and wind up pretty hills until you reach the town of Saint-Estève (6-km/3.7-mile mark). After that, the landscape changes to forests of cedars and the road becomes very steep to reach a 10.7 percent climb (8-km/4.9-mile mark). When you reach the 15.2-km (9.4-mile) point, you’ll see the Chalet-Reynard, a café/restaurant where skiers, hikers, and cyclists often congregate after a hard day on the mountain. On your way up, you’ll just bike by it and come back down later for a bite — you still have 5.9 km (3.6 miles) to go to get to the top of the Ventoux. From the Chalet-reynard upward, the landscape is all rocks, the wind seriously picks up, and the road gets windier. At the 20-km (12.4-mile) point, a headstone marks the spot where Tom Simpson collapsed and died in 1967 trying to get to the top during the Tour de France. The last stretch is a nasty 9 percent climb, but it’s very much worth the effort because the panoramic view at the top is majestic. On a clear day, you can see as far as Marseille and the Pyrenees. 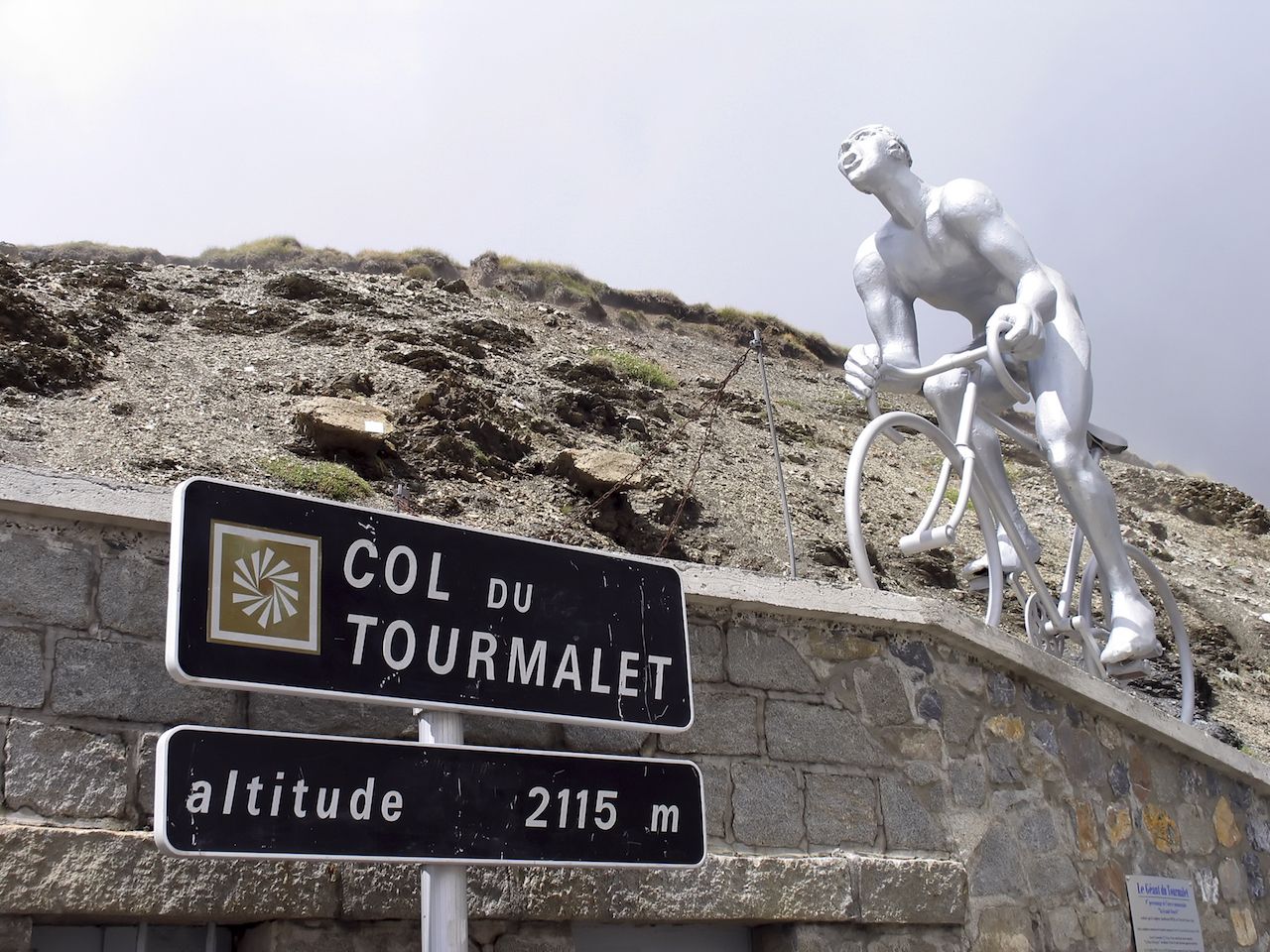 The Tourmalet is an incredibly popular Tour de France climb. The highest mountain pass in the Pyrenees Ranges has been featured in 57 editions of the race.

Although the Tourmalet is in a completely different region of France, conquering it is just as difficult as tackling the Mont Ventoux. The Tourmalet is a 17.1-km (10.6-mile) long and 7.5 percent average climb, so the going is super tough.

The starting point we recommend for this ascent is in the town of Sainte-Marie-de-Campan. You’ll be riding the east side of the mountain pretty easily until the town of Gripp (4.6-km/2.85-mile mark) where things get very steep. From the Garet waterfall (8.8-km/5.5-mile mark) and for 5 km (3.1 miles), you’ll pedal up a 10.2 percent climb and it will get worse as you reach the Mongie ski resort (11 percent). This part of the ascent will take you to a large skiing area as prove the numerous chairlifts and snow you’ll see, and the cold weather that will hit you straight on. Your effort will be rewarded once you arrive at the Tourmalet Giant, a large sculpture that honors Octave Lapize, the first rider to cross the Tourmalet mountain pass in the 1910 Tour de France. The restaurant Col du Tourmalet will supply the much-deserved drinks and food you’ll need before barreling back down the mountain. 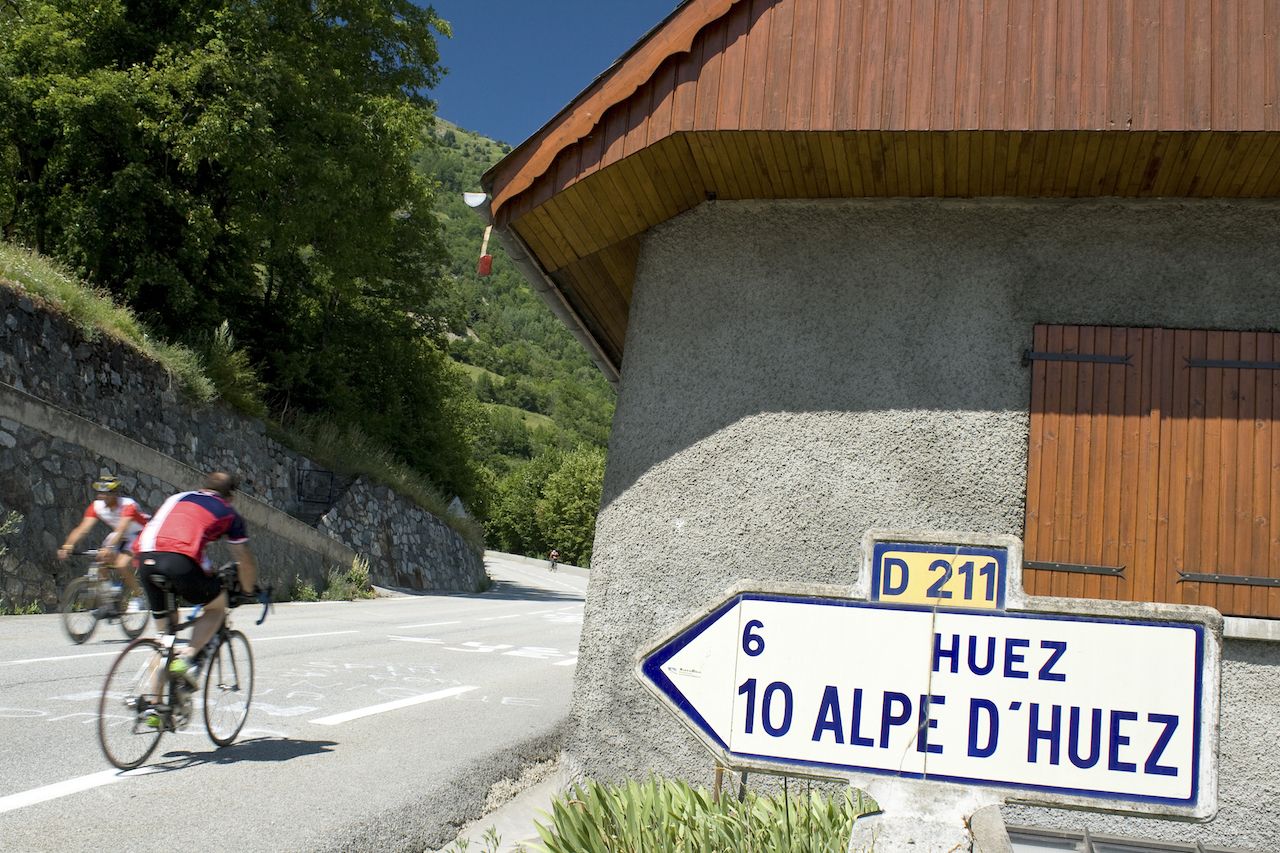 If you want to climb hard and challenge yourself, l’Alpe d’Huez is the mountain pass you’ll want to tackle. With a maximum climb of 13 percent and 21 switchbacks, this is a tough mountain to cycle up to.

Starting from the town of Le Bourg-d’Oisans (where you can spend the night as there are a few hotels, B&Bs, camping grounds, etc.) is the shortest way (13.8 km/8.57 miles) and is just as steep a route as the other options. Note that you won’t be alone trying to conquer l’Alpe d’Huez — this is a world-famous Tour de France stage, so behave accordingly and stay safe. The route will take you through pretty towns such as La Garde, Saint-Ferréol, and Huez, so make a note to stop by to check the scenery and the traditional architecture of the area on your way down. The switchbacks are in descending orders, so keep an eye on the signage, it might provide some motivation to get all the way up to the top. L’hôtel Eliova Le Chaix is located at the top of L’Alpe d’Huez, so if you did not make any pit stop on the way up, reward yourself with a cold beer. L’Alpe d’Huez is a ski resort, so the views are fantastic, but the weather is unpredictable. Make sure you check the forecast before you go because only a few days ago, on May 13th, it was snowing heavily on the village. 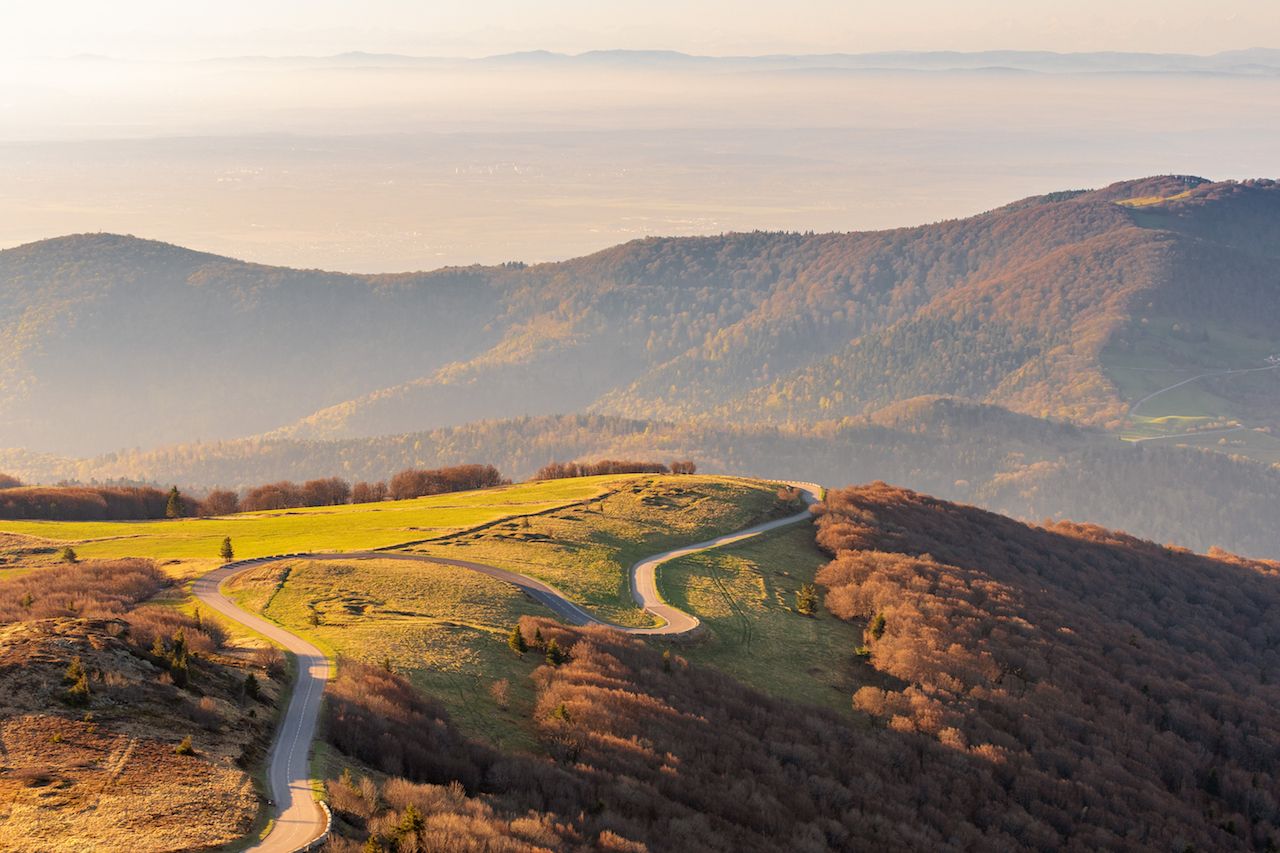 Le Ballon d’Alsace will come as a respite from the three previous mountain passes. The route we chose is only 9.6-km (5.9-mile) long and the average climb in 6.6 percent — a picnic if you’ve tackle l’Alpe d’Huez and lived to tell the tale. There are alternate, less-steep routes, but this one is the shortest.

You’ll start in the small village of Saint-Maurice-sur-Moselle and cycle through Le Parc naturel des ballons des Vosges (a large, protected natural park) where you can take in the beautiful rolling hills that are so different from what you’d experience cycling in the Alps or the Pyrenees. The views of the green valleys and forested areas will make this climb less depressing than the jagged mountain peaks of the previous climbs, but that does not mean you should underestimate the Ballon d’Alsace — it’s still tough to get up there.

The Ballon d’Alsace is a ski resort, so once near the top, you’ll see chair lifts and ski runs — that’s how you know the end is near. Once at the summit, there are restaurants and watering holes where you’ll be able to rest and enjoy a tasty blueberry tart — the area’s specialty. For the best view from the top, leave the bike and walk to and beyond the statue of the Virgin Mary. The panorama you’ll find is the best reward after all these efforts (after the tasty tart, of course).

Cycling16 of the World’s Best Cities for Cycling (Plus One Island)
Tagged
Cycling France
What did you think of this story?
Meh
Good
Awesome

The Best Museums in Paris That Are Not the Louvre