The highest, and likely most exciting, via ferrata in all of North America opened this summer at Arapahoe Basin ski area in the high Rockies of Colorado. It’s the most thrilling way to make the transition to outdoor climbing.

While indoor climbing at a gym is relatively safe and predictable, outdoor climbing can be intimidating. Mother Nature didn’t design the world’s rock faces and crags with perfectly placed hand- and footholds, after all. In a via ferrata, on the other hand, you’re harnessed and on the rock, much like trad climbing, but with the benefit of steel holds and a fixed steel line. Here’s what to expect at the record-breaking via ferrata at Arapahoe Basin.

What is a via ferrata, exactly? 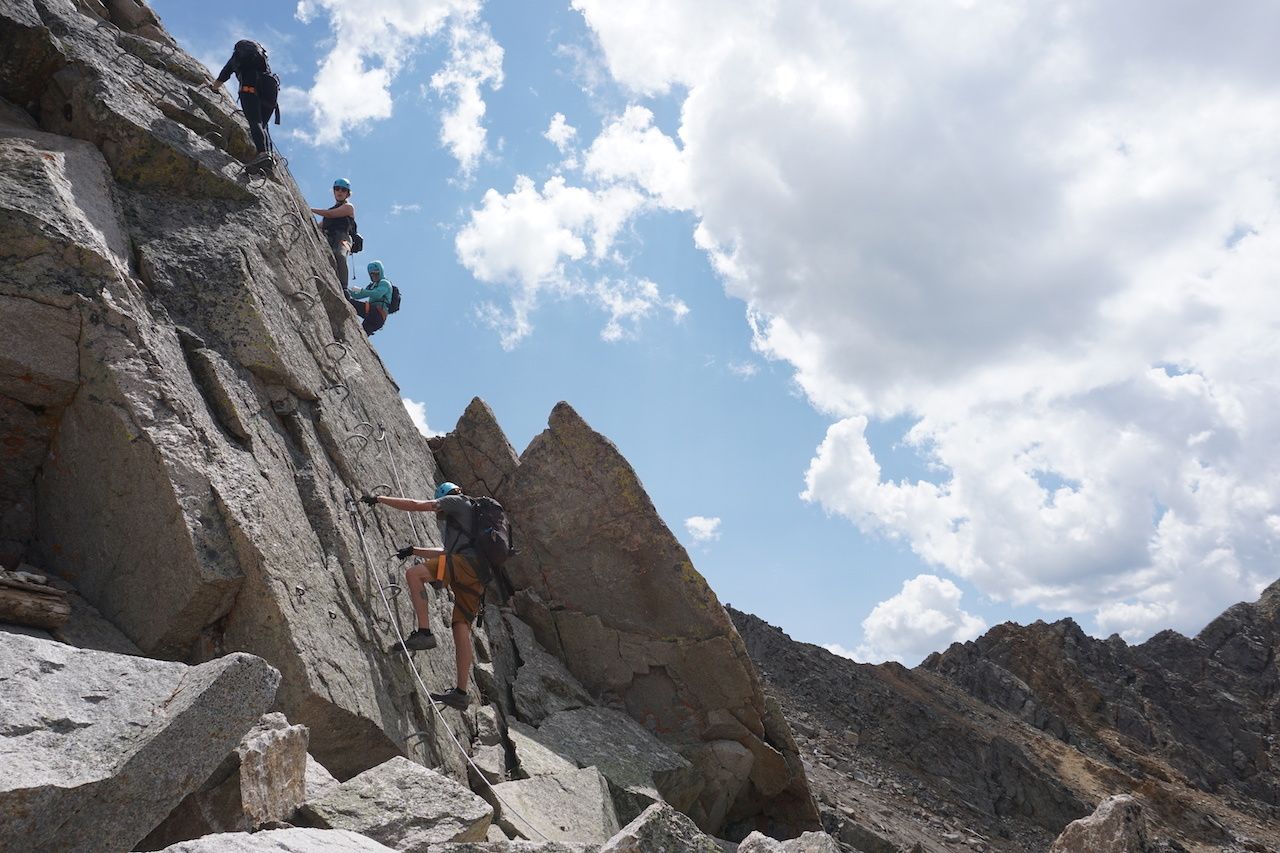 Via ferrata means “iron way” or “iron path” in the Italian language. A via ferrata is a fixed climbing route set with steel anchors to assist where hand and footholds are noticeably absent. Additionally, the climber is connected by dual carabiners to their harness and a steel rope that runs the length of the course. The rope is anchored to the rock or wall every several feet en route. At each anchor point, the climber unbuckles their carabiners and re-buckles on the other side of the anchor, allowing them to progress along the route. This also prevents drastic and deathly falls — if you were to slip, you’d only fall as far as the last anchor point before the carabiners attached to your harness catch you.

In essence, a via ferrata is an ideal introduction to rock climbing and mountaineering because it exposes you to the moves, gear, and climate of these extreme sports, in an entry-level environment and with far less risk of serious injury.

While the origins of the via ferrata date back to the mid-19th century as a way to connect remote villages in the Dolomite range of northern Italy, it was during World War I that their construction and expansion began in earnest. When the Austro-Hungarian empire was battling Italy during World War I, they served to safely and quickly move soldiers across The Dolomites. During and even after the war, the use of these fixed climbing routes expanded across The Alps.

Via ferratas eventually spread to North America, increasing in popularity in the 2010s as a means for recreational users to experience mountains, canyons, and gorges previously only accessible to experienced alpinists. There are currently more than 3,000 via ferratas in the world, the vast majority of which are in Europe. 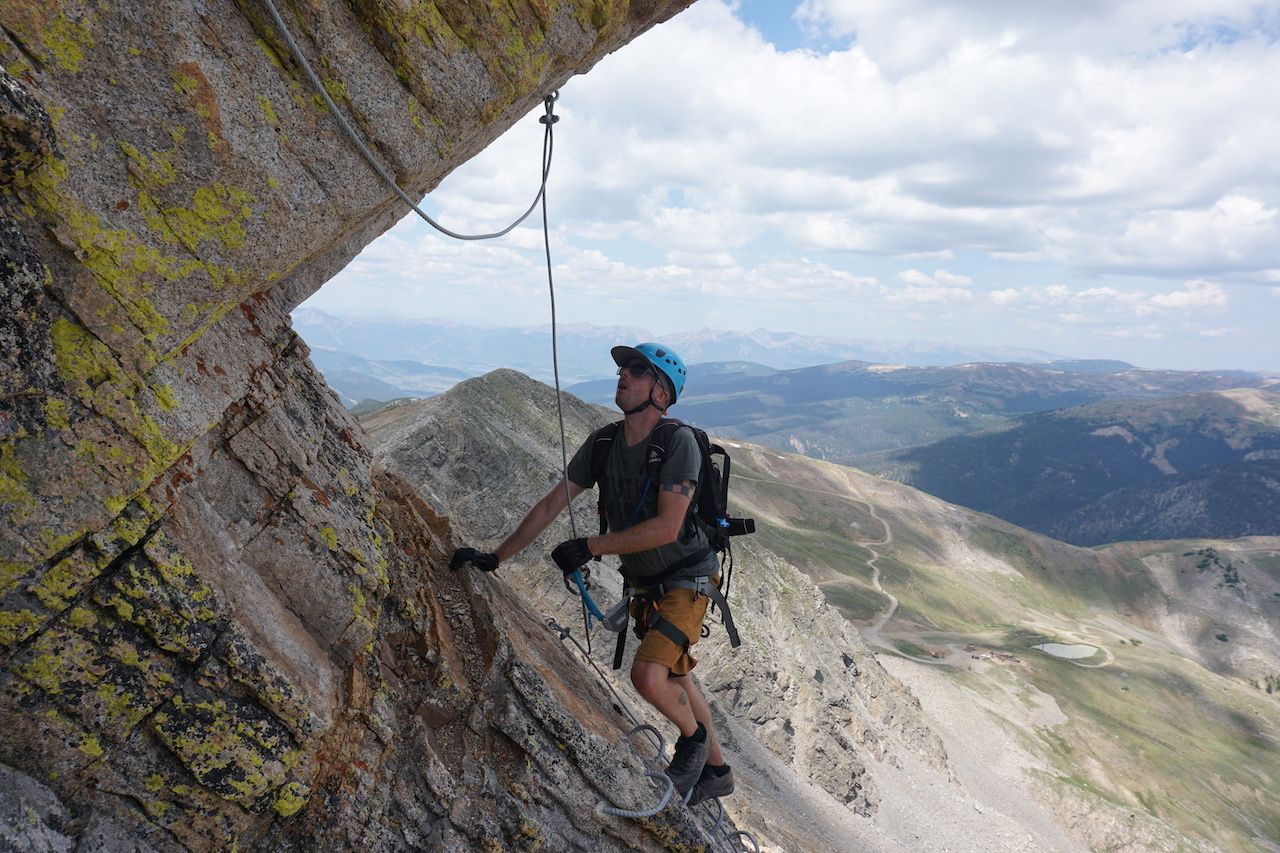 I looked down at the four climbers behind me, each at a different stage of ascending the upper portion of Arapahoe Basin’s East Wall. The East Wall is an 800-foot-tall face of sheer granite that towers above the resort’s Lenawee Mountain Lift to a summit elevation above 13,000 feet. From this elevation and pitch, the open blue sky surrounding the climbers behind me was a pretty, if eerie, contrast to the rock we clung to — and the green and brown summer tint of ski runs cut through the pines below treeline were by now more than 1,000 feet beneath us.

The Arapahoe Basin via ferrata began with a ride up the Black Mountain Express lift to 11,550 feet in elevation. From here we walked a half-mile to the beginning of the via ferrata course, where our guide, Thomas Beatty, led a safety talk and carabiner practice session. Two of the five members of our team had never attempted a via ferrata — or any climb at all.

This was only my second outdoor climb, and it had been five years since I’d last strapped in. A bit rusty, I fumbled my way across Schoolhouse Rock, named as such for its position as the practice station, until I found a level of comfort with one hand on a steel ladder and the other coddling a small divot in the rock that served as a practice handhold. The others did the same. Within twenty minutes we were hooked into the course and heading up the East Wall.

If you’ve seen Tommy Caldwell’s ram-like crag prowess in The Dawn Wall, then you have a basic idea of what climbing looks like. Actual sport climbing is an extreme version of what it takes to climb the Arapahoe Basin via ferrata. While many of the fixed routes in Europe and the Americas consist mostly of quick vertical ascents interspersed with horizontal movements across a rock wall or canyon face, the climb at A-Basin is true to its name. It goes up — and although there are several places to stop on a flat surface for a sip of water and a moment of rest along the way, most of your time and physical effort is spent ascending steel ladders and working through tight crags.

To attempt this track, you should be in at least moderate shape and be comfortable exerting energy for four to six hours at altitude. A backpack, closed-toed shoes, and at least one liter of water are mandatory. Arapahoe Basin offers two excursions on the course, a half-day trip that reaches an old mine about halfway up the face, and the full-day climb we had embarked on that heads to the summit. All climbs are guided and consist of small groups of not more than five participants. The course is hair-raising, as you stare straight into the East Wall as you move from rung to rung, and each time you stop to look back, the ground is farther away. But it’s not extremely difficult. Within ten minutes, everyone in our group had become comfortable with moving the carabiners around the anchors. The basic climbing motions necessary to move up the course fall somewhere between scrambling up a steep, rocky hike and climbing a never-ending ladder. 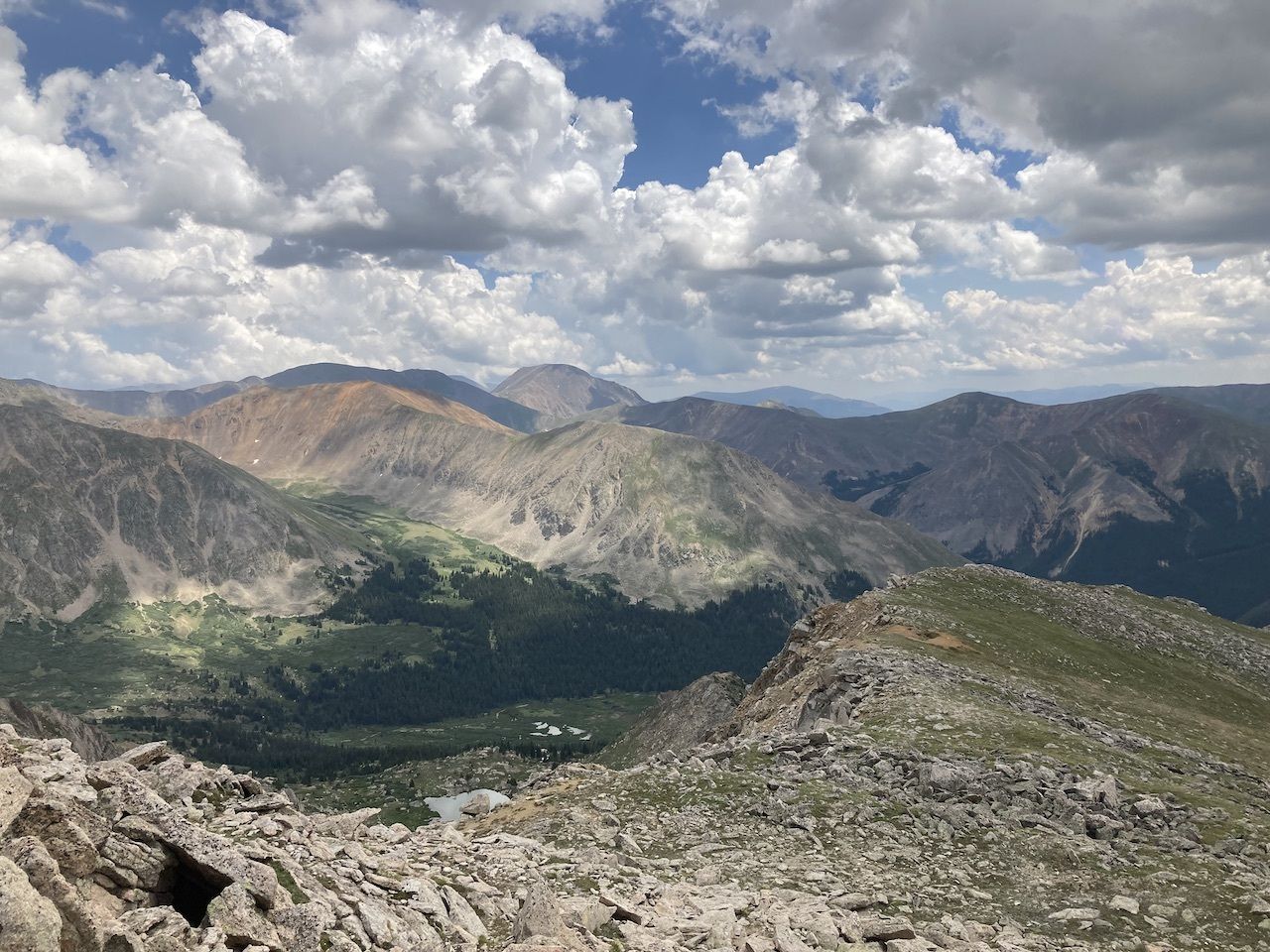 We stopped about halfway up the climb, having taken a little over an hour to reach the old mine that marks the high point of the shorter tour option. After a quick snack and water break, we were back at it. Our group took another 60 minutes to ascend the top portion of the climb, a much steeper section that involved more than a half-dozen separate pitches. The full route climbs 1,200 feet.

Climbing over the final stretch of granite to the summit, I pulled myself up and over and was greeted by a view that few have the privilege of experiencing, and even fewer outside of an airplane. The Rockies stretched out in all directions — 360 degrees of peaks from Buena Vista to the south, north to the Flat Tops near Steamboat Springs, with snow visible on some even in late July. Beatty, our guide, informed us that more than a dozen 14’ers — peaks above 14,000 feet in elevation — are visible from this spot depending on weather conditions across the high country. We counted seven that afternoon.

During the descent, climbers spend much of the downward portion in a sort of semi-rappel, gripping the steel rope with both hands as they move their feet down the face of the rock wall from rung to rung. The steel rope would undoubtedly skin your hands raw if you were to forget a pair of gloves. The descent takes less time than the ascent but is no less daunting. I spent much of the time facing the rock and looking down below my feet, identifying each next step as it approached. Once regrouped at the bottom of the wall, we hiked the half-mile back to the top of the lift.

This experience boosted my comfort on high-altitude rock faces and set the course for tougher, more legitimate mountaineering. For the true adventurer, the confines of a climbing gym can never satisfy the lust for that next summit.

SustainabilityRaft Idaho’s Salmon River and Actually Help the Salmon in Their Fight To Survive.
Tagged
Climbing Colorado, United States
What did you think of this story?
Meh
Good
Awesome