While South America has some of the most diverse natural landscapes in the world, among the greatest draws to the continent’s distinguished natural beauty are its beaches. Splayed along the Pacific, Atlantic, and Carribean coastlines, the most recognizable South American beaches are in Brazil, Colombia, and the like. The coastlines of Argentina don’t typically make the list of the best beaches on the continent, and most travelers certainly don’t think of Patagonia as a place to bask in the sun. This reveal is about to change all of that, unveiling the pristine, secret beaches of the Rio Negro province within Argentine Patagonia. 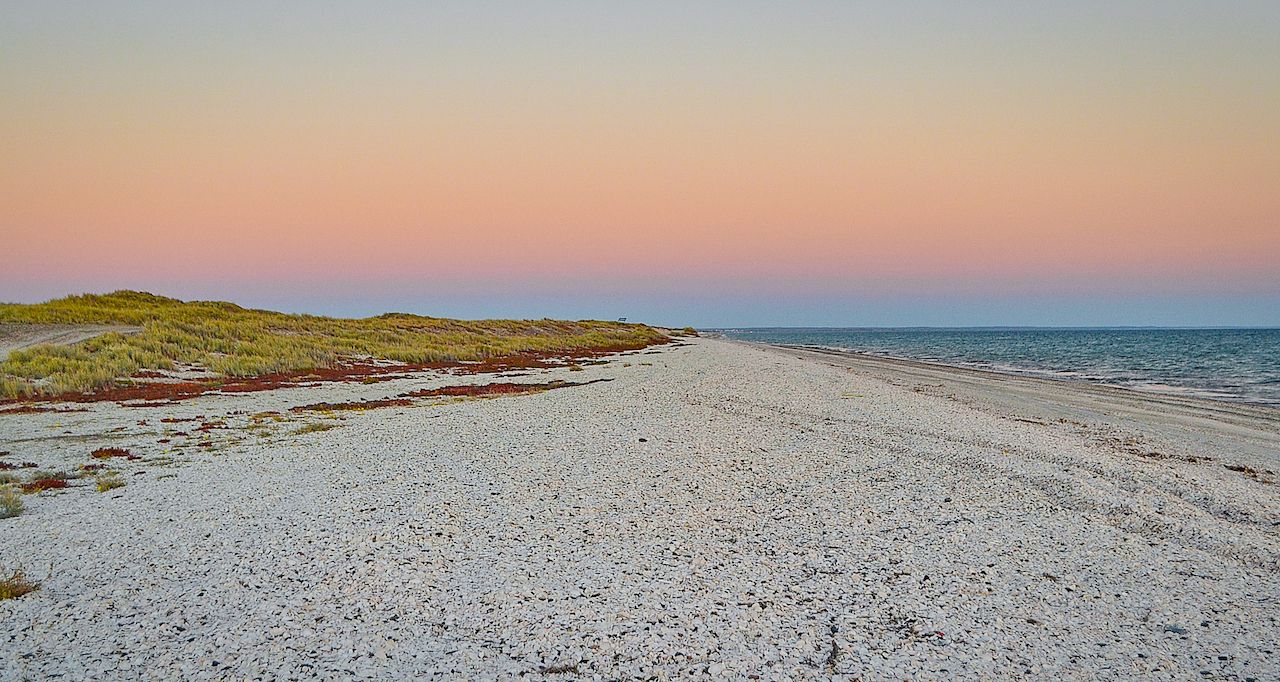 Rio Negro is the northernmost province of Patagonia, a lesser-known travel destination in Argentina. The region hides an eye-popping 130-mile coastal route known as the Camino de la Costa, which spans the sparsely populated coastline between Viedma, itself 570 miles south of Buenos Aires, and Las Grutas. Ultimately, it unravels some of the cleanest, most picturesque, and remote beaches in South America. Although there are dozens of beaches on the Camino de la Costa, these are our top picks from the route. 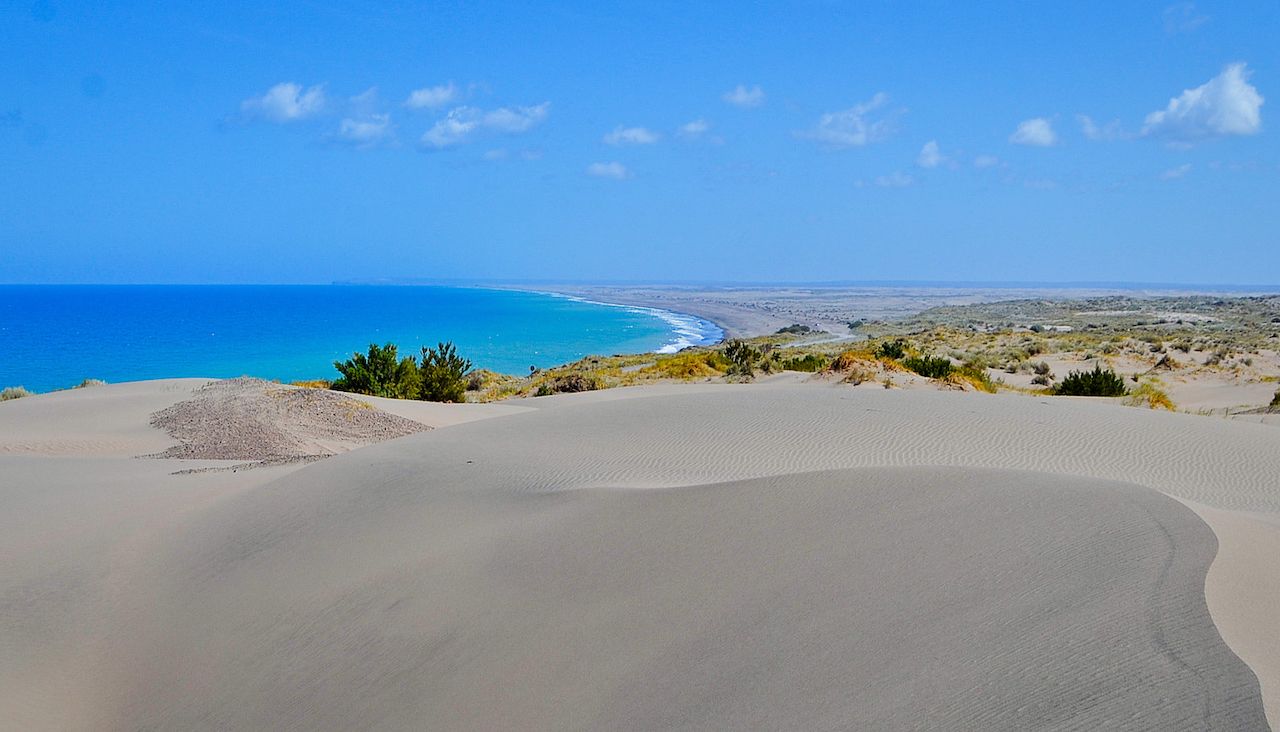 Starting from the north, Bahia Creek is located 60 miles southwest of Viedma and has 18 miles of coastline pinched between rolling dunes and 300-foot cliffs. Harbored by the tiny village of the same name, barely 100 people call this impressive beach their home. The sand road to the beach is accessible only on foot or by an off-road vehicle at low tide. From one end to the other, travelers can explore the beaches with ATV tours offered by the local Hostel Refugio Perdido during the summer months from December to February. It’s possible to visit a native sea lion colony and see migratory birds in the coves.

This section of the route is especially idyllic for the toasty beach conditions, as the coastline is protected from the Patagonian winds, and the water is warmed up by tides hailing from Brazil. Beachgoers can enjoy swimming, snorkeling, paddle boarding, and fishing. At high tide, head up the hill for paragliding and more ATV thrills or sandboarding on the largest dunes in Patagonia. The cliff tops and dunes offer unparalleled sky-high views of the turquoise sea and expansive beaches. 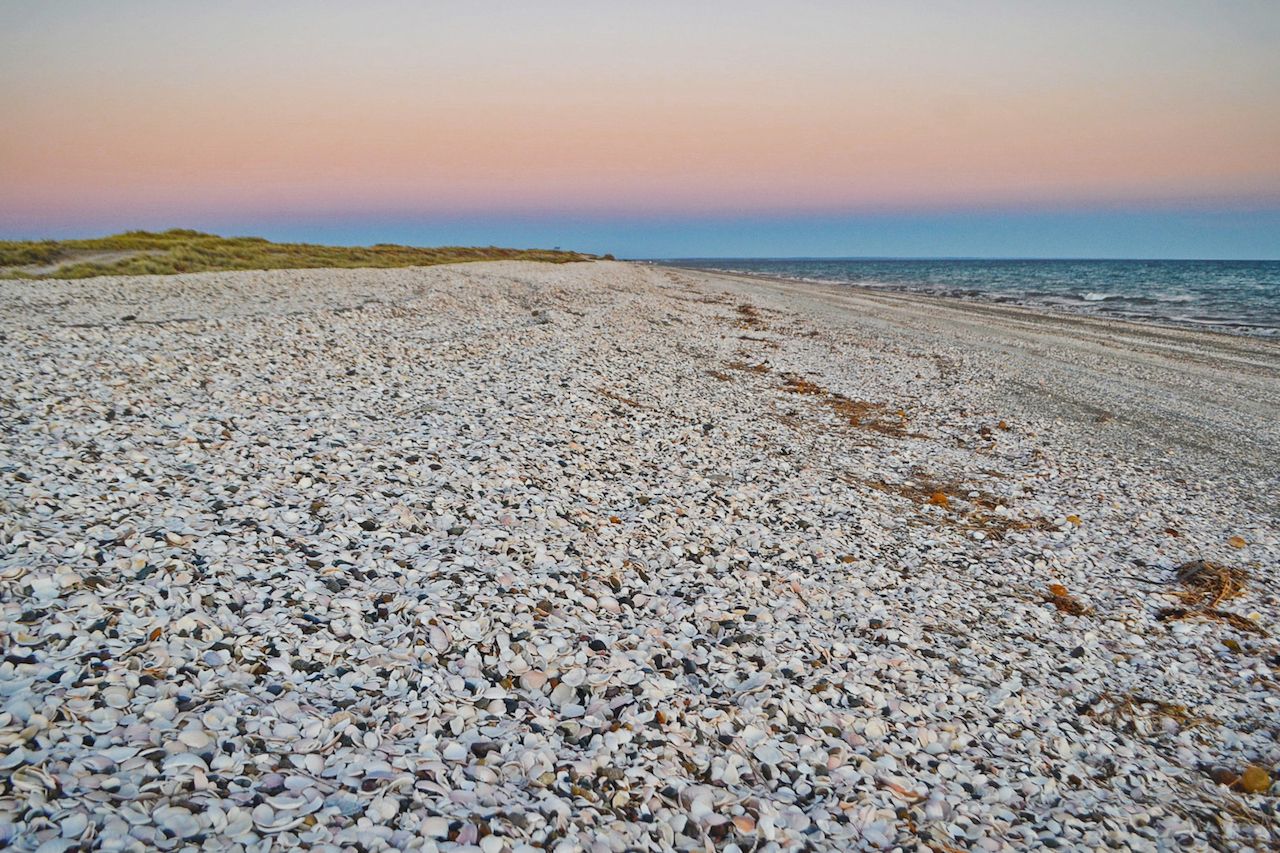 The name directly translates to “Little Shell Beach,” aptly describing the shell-caked coastline, where piles upon piles of white shells carpet the isolated beaches. In the summer, you can find a beach-shack-style restaurant and lounge chairs at the beach’s entrance — but no less than 500 yards away the landscape is devoid of humans.

There are few to no residents along this eight-mile stretch of pristine seaside, offering a prime haven for non-tent campers. It is truly an oasis for getting off the grid, breathing in the pure breeze, and collecting lunch right off the shore. Come low tide, the ocean sands leave behind a gift with thousands of live clams for the taking.

Although the water is cool, it’s impossibly clear, so brave swimmers can jump in for a chance to mingle with rare dolphin species. Among them are the Commerson’s dolphin, also known as the panda dolphin, and the dusky dolphin, which is known for its aerial acrobatics. 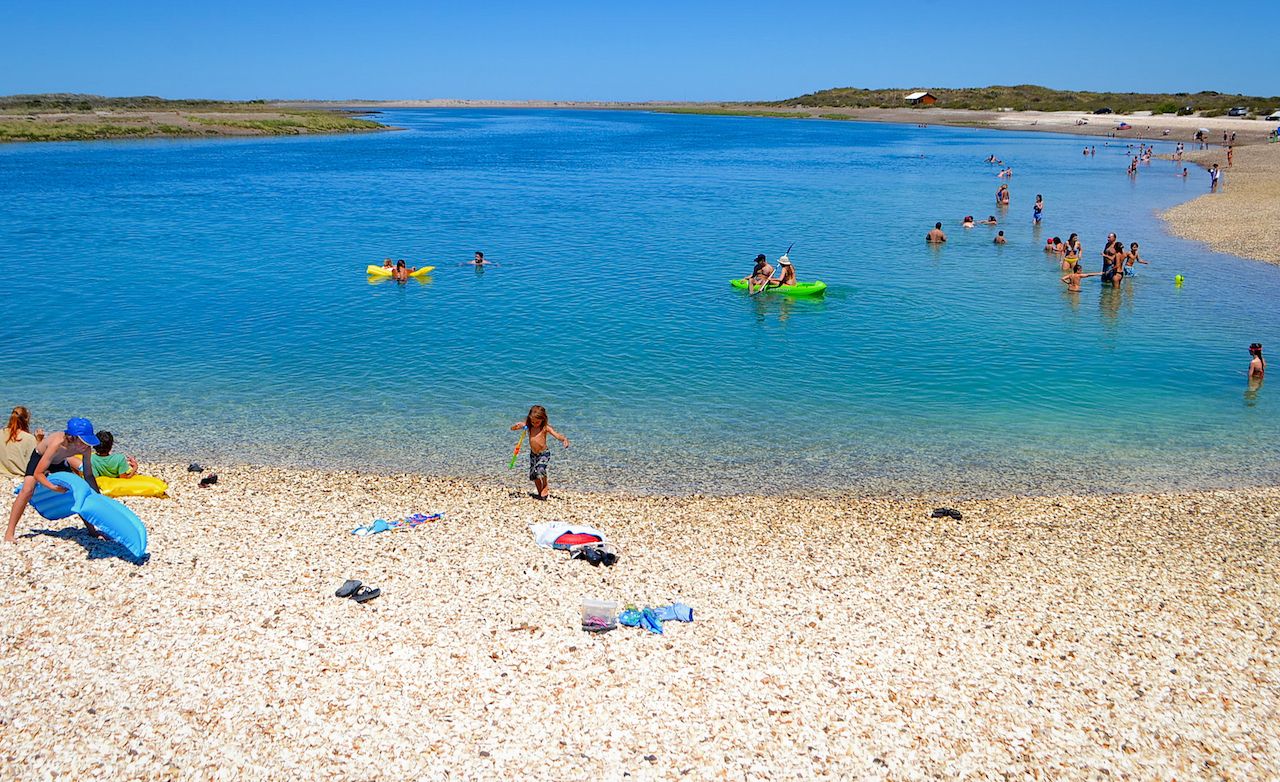 Playa Las Conchillas lies at the south end of Punta Verde, a peninsula that juts westward into San Matias Gulf. On the north end of Punta Verde, just over four miles away, is Playa Perdices. Here, the shell-coated beaches continue, rising over coastal hills and dipping into segregated coves decorated with sand bars and rocky enclaves.

The coastline’s segmented features allow for extreme tidal variations every 12 hours or so. At the highest point, the coves turn into stunning natural pools reaching 20 feet of depth in the center. The clear, Carribean-colored sea brings calm, warm ocean swells suitable for snorkeling, paddle boarding, swimming, and kayaking. Above the shell-covered basin, the tide brings in Patagonian penguins, various fish species, and dolphins. Then the process repeats, allowing nearly all of the water to drain until it recedes up to 150 feet, and only a trickle remains in the shallow alcoves. 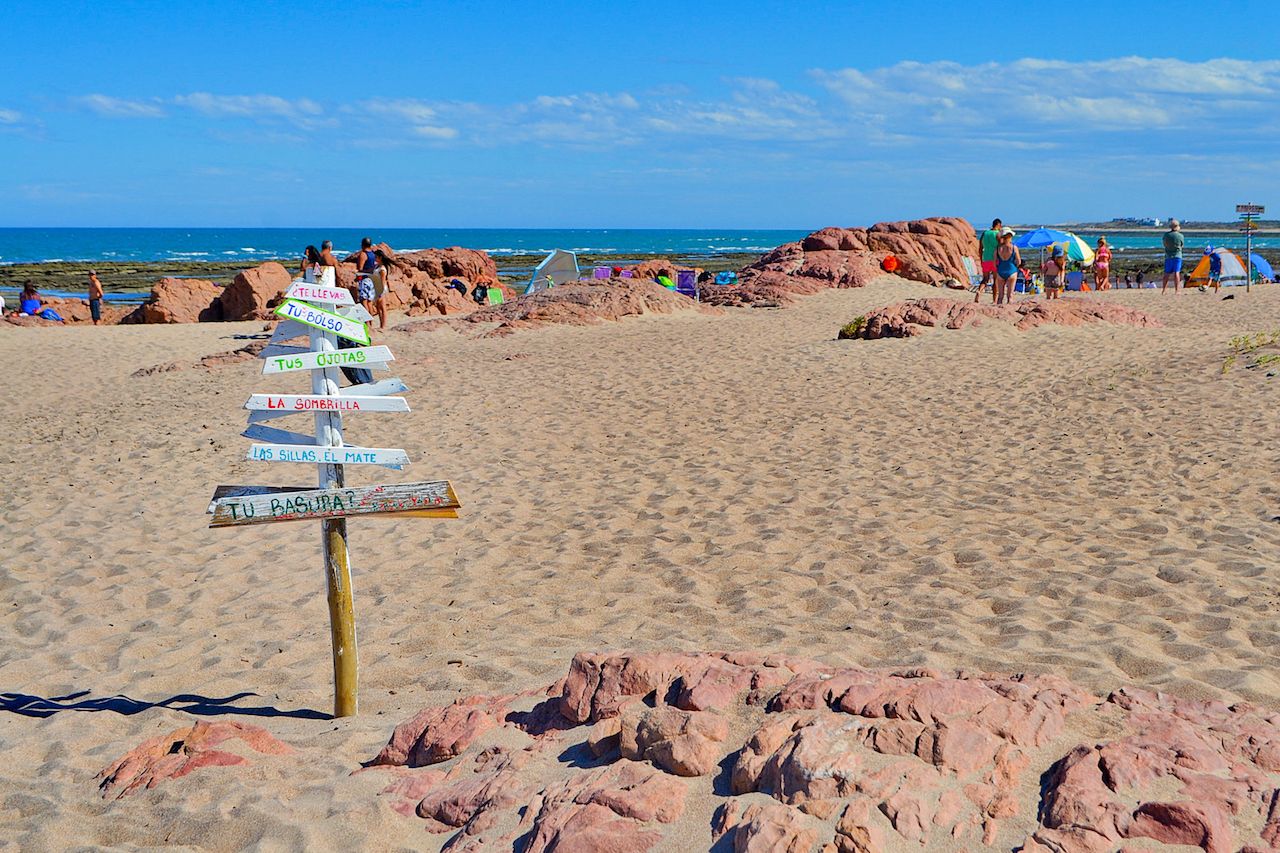 Bringing up the tail of the list is Playa Piedra Colorados, or Beach of Red Rocks, on the opposite side of the San Matias Gulf. Although it’s a mere 2.5 miles south of the nearby city of Las Grutas, it is the most remote of the city beaches. It’s the only beach on this list with full services — in the summertime — including beach cabanas, umbrella rentals, restaurants, and lifeguards. 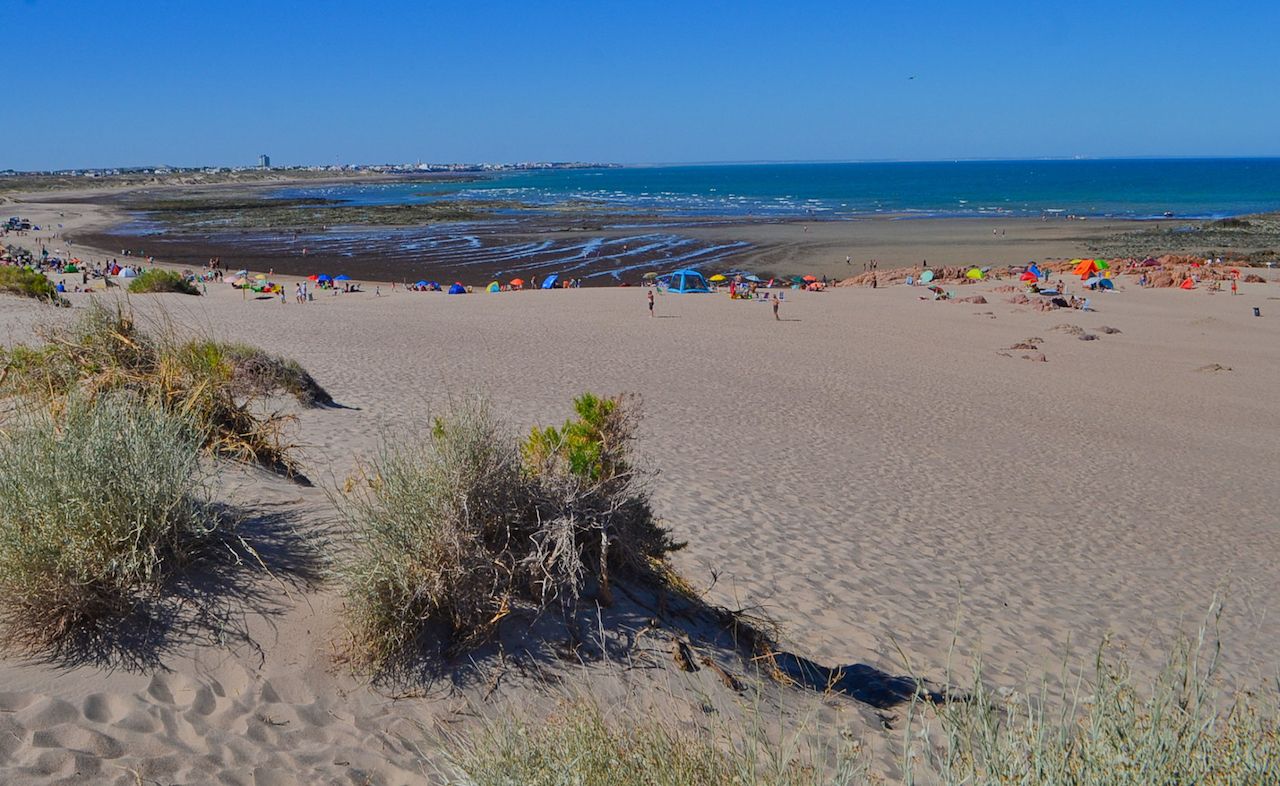 Beyond these conveniences, the only sights of the city are in the far distance. As its name implies, a section of the beach features a crop of brick-hued rocks rising between the sea and the wide, golden beaches. The surging and receding tides offer varied landscapes where the ocean meets the land, but plenty of the coast retains dry, fluffy sand regardless of the fluctuation. Towards the west, the beach is backed by a low set of dunes offering views of the beach and land as far as the eye can see.

WildlifeThe Valdes Peninsula Is the Absolute Best Place in Patagonia To See Wildlife
Tagged
Beaches and Islands Argentina
What did you think of this story?
Meh
Good
Awesome