The year 1965 proved tumultuous for the people of Indonesia. Massive power shifts were taking place in the country, and Indonesia’s leader, known as Sukarno, found himself the subject of a military coup. Anti-communist sentiment lead to a genocide of around 800,000 people, including some ethincally Chinese people as well as communists. Sukarno landed in house arrest (where he would die in 1970). It’s perhaps no wonder that Yvonne Cheng, an artist who would eventually become known for paintings of Hawaiian women, and whose grandmother was Chinese, no longer felt safe in her home country. Her then-husband David, who built high-rise hotels in Jakarta, was a friend of Sukarno’s. The couple was in serious danger.

“‘We left’ is a nice way to put it,” Cheng tells me from her home on Oahu. “We had to leave quickly.”

She and her husband decided to flee Jakarta, settling in Cambridge, Massachusetts. David knew the area; he had attended Harvard. What Cheng didn’t know is that this terrifying journey away from home and to safer harbors in the United States would launch her career as an artist.

As soon as the couple made it safely to Cambridge however, David began to pine for the pristine shores of Honolulu. He’d been introduced to Hawaii by Sukarno himself. In fact, the pair often vacationed together (“Sukarno had girlfriends everywhere,” Cheng quips). In 1967, the family decided to move to Honolulu, the city she would end up making her home for the rest of her life.

Once Cheng settled in Honolulu she set about caring for her two stepchildren. But back in Indonesia, she’d had a housekeeper and cook help run her home. Cheng had no idea how to be a housewife, and soon found herself listless and bored. At the suggestion of a friend, she took up Chinese cooking classes at the YMCA.

“It was in an old building and then they had art classes too,” recalls Cheng. “I knew how to draw, but I wanted to do something more than that.”

Cheng had taken art classes at the the Dutch-run highschool she attended in Jakarta, where “they taught you until it almost killed you.” She had the classical technique behind drawing figures drilled into her mind. But she wanted to learn to be more creative, to develop her own style.

Cheng started off by drawing Indonesian figures, but felt compelled to draw more of what she saw around her. Cheng visited Honolulu’s Bishop Museum, and learned everything she could about Hawaiian history. The museum offered art classes of its own, and she signed up. Then one day, Cheng attended a luau. She was mesmerized by the dancers.

“They were so graceful. I really fell in love with it,” she says.

Cheng decided to devote her career as an artist to drawing figures of Hawaiian women — draped in patterned fabrics and reclining in front of giant banana leaves. Cheng paid special attention to the textiles, a medium she’s been fascinated with since seeing her grandmother don intricately designed sarongs and Indonesian batiks. As a stay-at-home mom, she had the opportunity to pursue painting full time, and she took it. 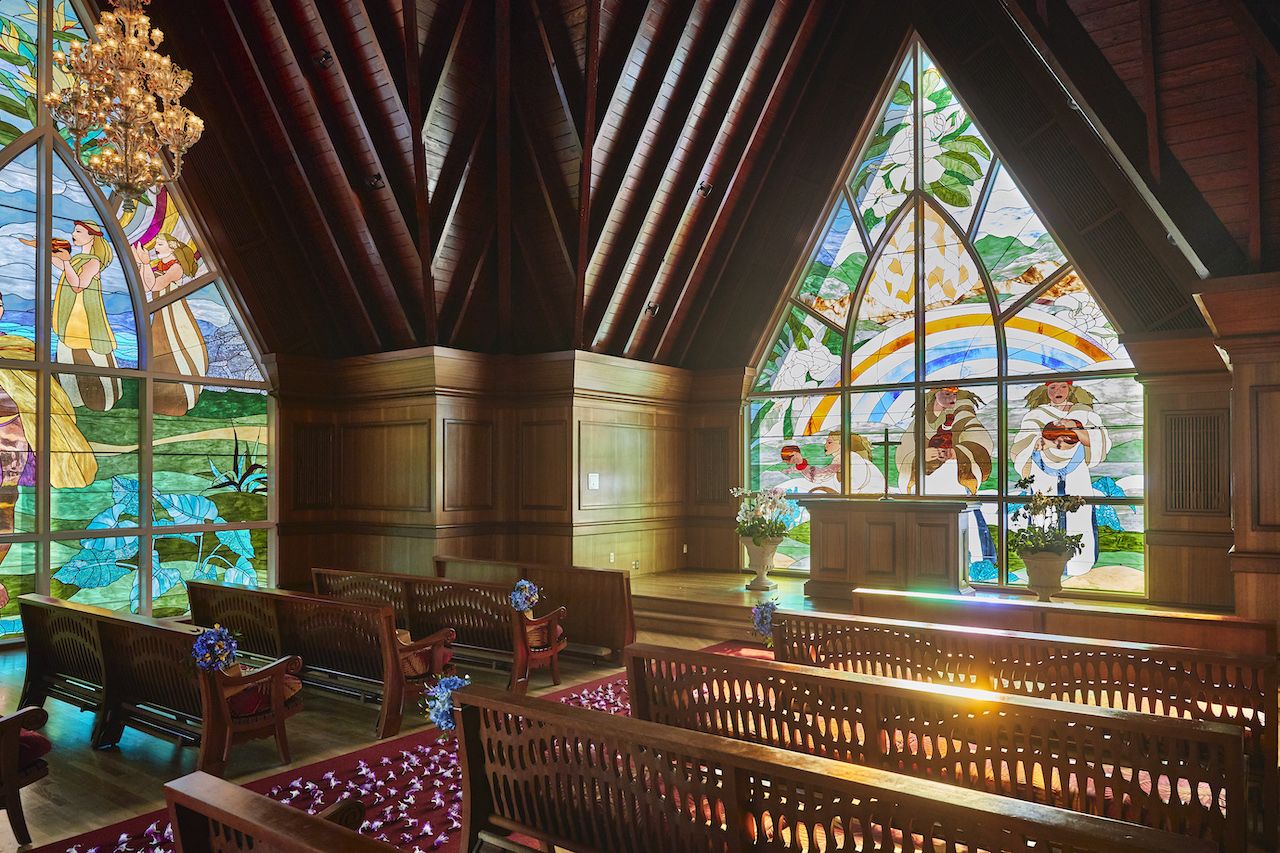 Around the time she began her Hawaiian figures, a hotel developer named Takeshi Sekiguchi introduced himself to her. The pair enjoyed the same social circle, and Sekiguchi, an art collector, heard that Cheng had begun painting Hawaiian women. He had a new property in the works — the hotel that would eventually become the Grand Wailea — and he wanted it to have an authentic Hawaiian atmosphere. Sekiguchi hoped she could help provide some of the artwork that would decorate it, and immediately commissioned artwork from her. But Cheng wasn’t entirely convinced she could pull it off.

“I was just an upcoming artist,” Cheng says. “It was very exciting for me. It was kind of scary. I wasn’t sure if I wanted to do it. The scope of it scared the living daylights out of me.” She and Sekiguchi talked over her concerns, and he ultimately convinced her to take the job. “I thought, well, if everyone thinks I can do it, I might as well do it.” 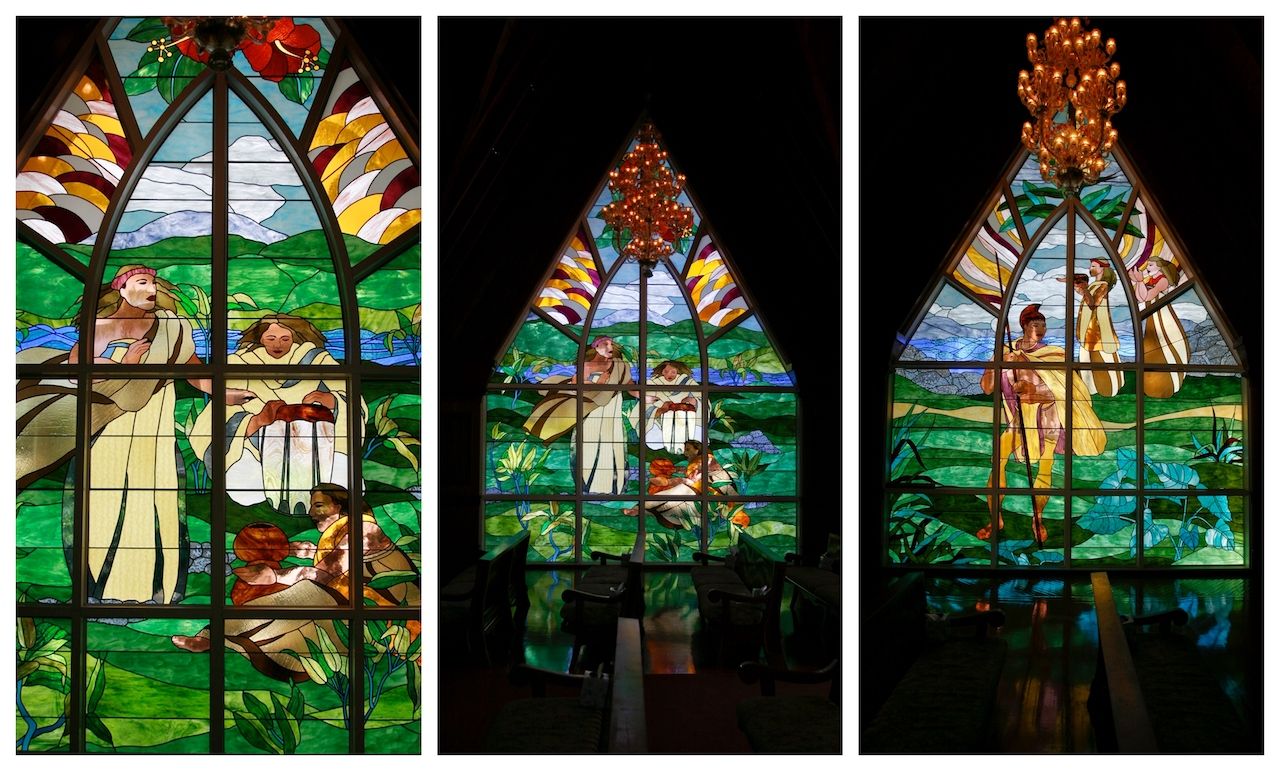 Sekiguchi wanted Cheng to focus especially on creating stained-glass windows for the wedding chapel he planned to build on the grounds of his new hotel, as well as mosaics for interior. He left the design up to her. She landed on simple, but powerful, depictions of Hawaiian people in nature: Each window features Hawaiian women, draped in white-and-cream-colored robes, and crowned with bands of red fabric. The murals depict Hawaii’s verdant landscape, too, like a river running through green hills. In one panel, three women gather water by the river; in another, a warrior watches over a procession of women walking on a hillside. She also created a mosaic mural for the foyer that leads to the hotel’s massive dining room which depicts three women clad in robes, surrounded by voluminous banana leaves. 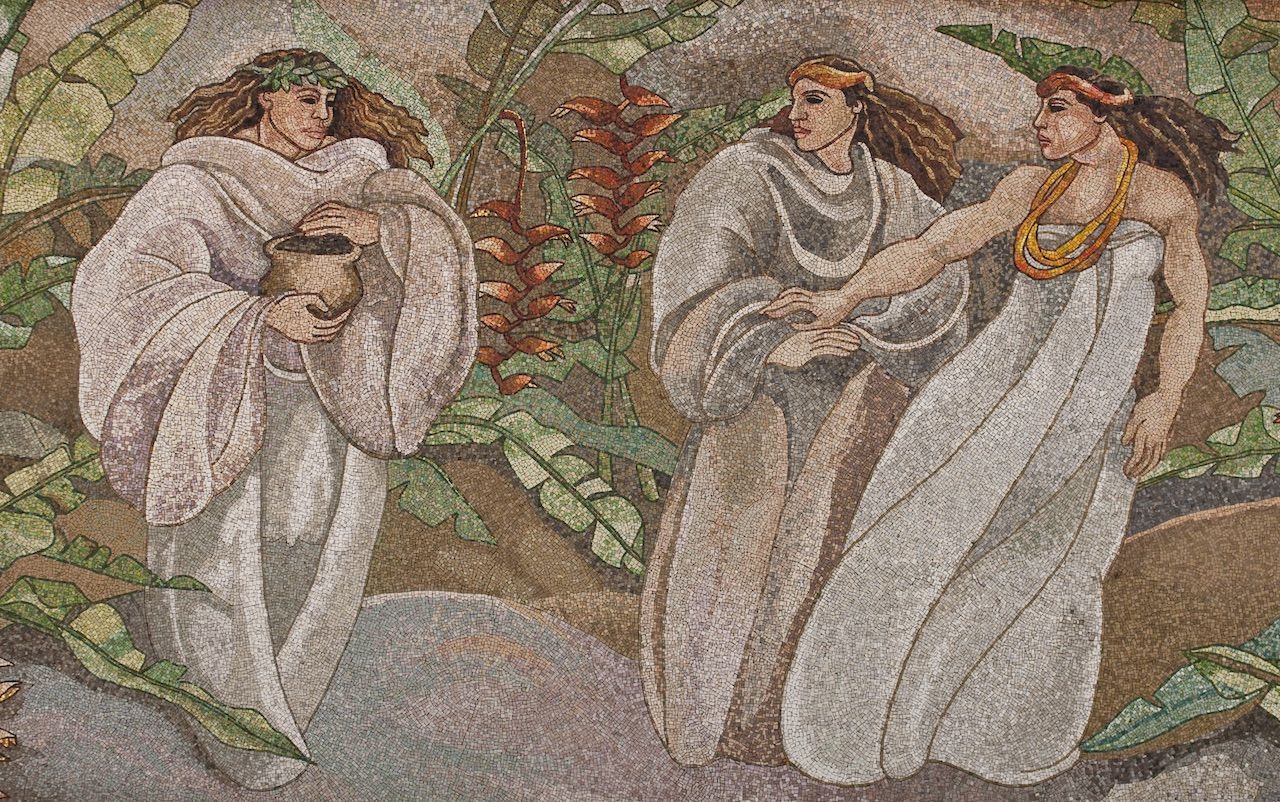 As a painter, Cheng had never worked with either medium (mosaic or stained glass). Sekiguchi wasn’t worried. Instead, he flew her out to Italy to meet with Bisazza, the Italian mosaic company. She met with the son of the company’s owner, and the pair went over her watercolor mockups of the design.

“They let me stay in a hotel overlooking the canals,” Cheng recalls. “And then they drove me toward Eastern Europe, where they had the mosaic factory, so I could see them make it.”

In 1991, 29 years ago, the Grand Wailea opened, complete with the chapel, situated on a pond overlooking the beach, surrounded by palm trees, baring Cheng’s designs, as well as the expansive mosaic adjacent to the dining room. The chapel quickly became a wedding hotspot: Couples gravitated toward the stunning, almost-psychedelic stained-glass windows, which are the centerpiece of the structure. The tiny chapel is intimate, the epitome of romance, and yet its location at the resort lends an air of glamor and sophistication. 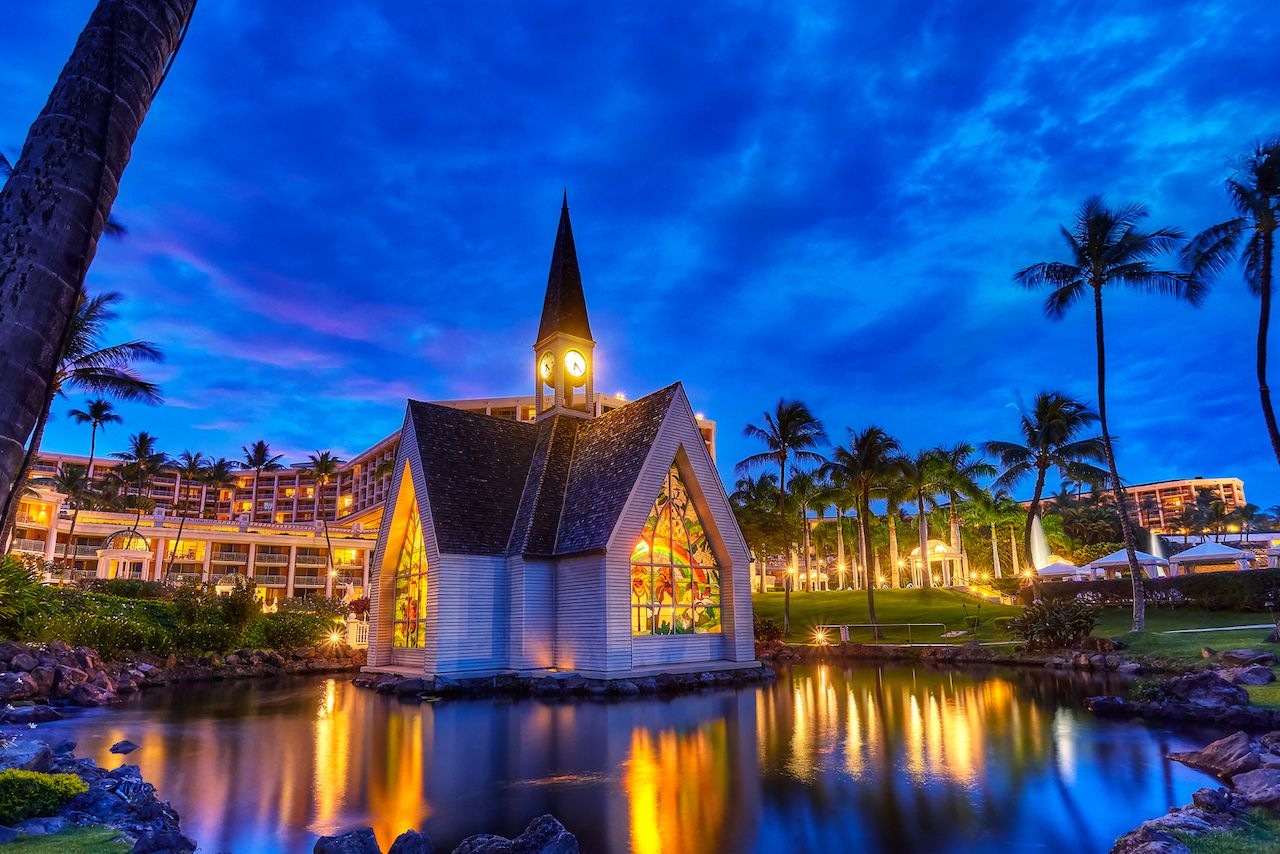 Over the years, couples began gravitating toward the beach for their weddings and the chapel sadly fell out favor. Yet when I visited in 2018, guests of the resort could be seen wandering in and out of its open doors, drawn again to Cheng’s spectacular windows which catch the sunlight and seem to glow. Inside the solitude of the chapel, the buzzy, energetic atmosphere of the resort falls away and a feeling of serene calm takes over. Cheng’s work casts a spell. In a place that can seem to cater solely to the whims of tourists, her work elevates the people and the natural beauty of Hawaii.

Today, Cheng is still painting her signature figures for art shows around Hawaii with other women artists, and people are still buying her work. She’s also taken up ink and brush designs, and still dabbles in textile design. Her stained-glass windows, however, remain timeless — and still evoke powerful memories for the artist herself.

“You know when you’re younger you just think ‘Yeah, I can do it.’ But you don’t think further,” she says. “You don’t think of all the things that could go wrong. But I had a lot of help and people that encouraged me. I’m amazed that I did it.”

Beaches and IslandsWhy Oahu Should Always Be Your First Hawaii Vacation
Tagged
Art + Architecture Hawaii, United States
What did you think of this story?
Meh
Good
Awesome