In case you haven’t heard, Asheville is a special place. As Asheville’s star rises on the national stage, it’s gained a reputation for two things above all else: an elite craft brewery scene and access to some of the best mountain recreation east of the Mississippi. Any given weekend, you’re sure to find tourists flocking to downtown breweries and cramming the scenic highways by car. But there’s a way to sample some of the best beers Asheville has to offer, notch an epic adventure, and escape the crowds — all at the same time: Hit the French Broad River. Here’s how.

Take to the river 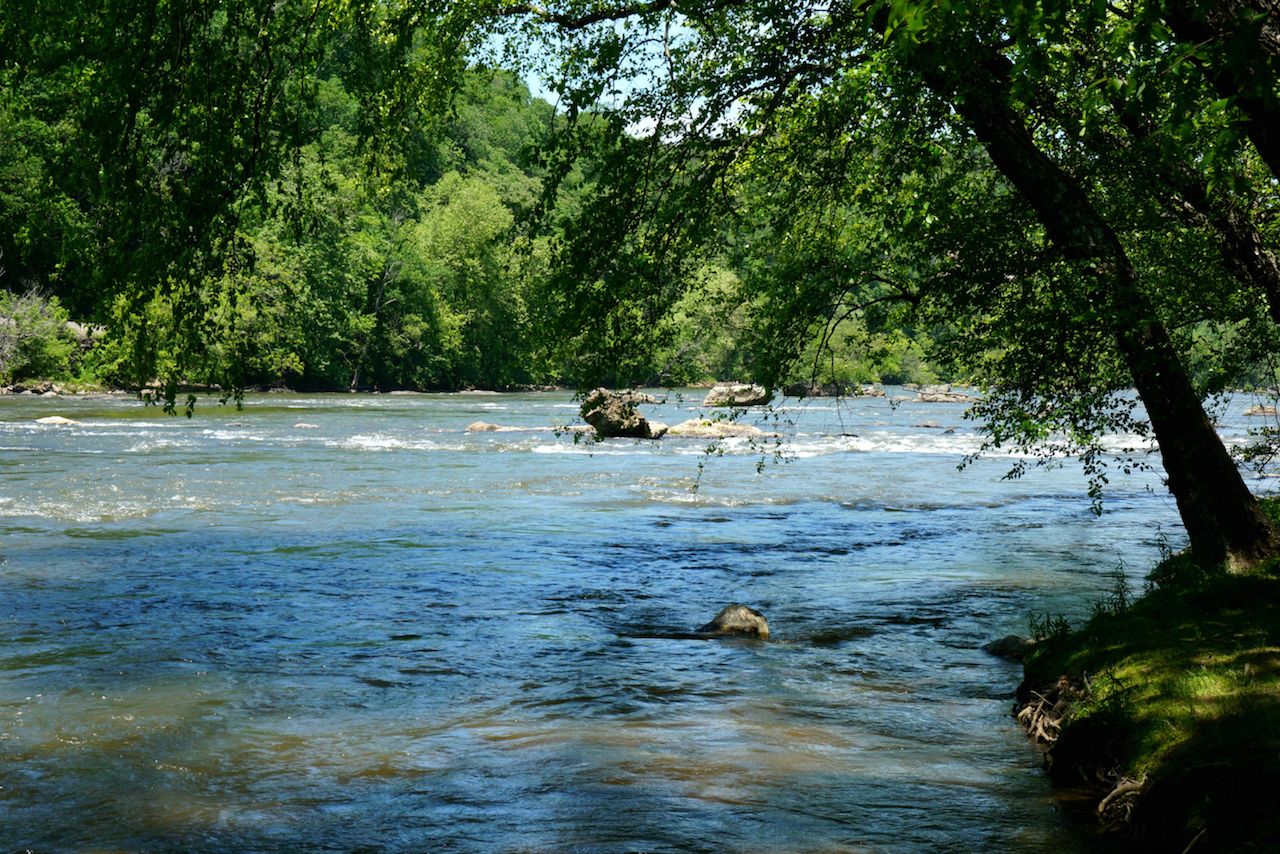 Where you’re going, you don’t need roads. The 218-mile French Broad River cuts a winding path through Asheville on its way to the Tennessee river, and thanks to the newly minted French Broad River Paddle Trail, it’s now possible to canoe camp from the river’s headwaters near Brevard all the way to just outside of downtown Asheville. Following this itinerary, you’ll spend three days and two nights on the river, hitting up a different brewery every day — plus a bonus brewery on your last day. 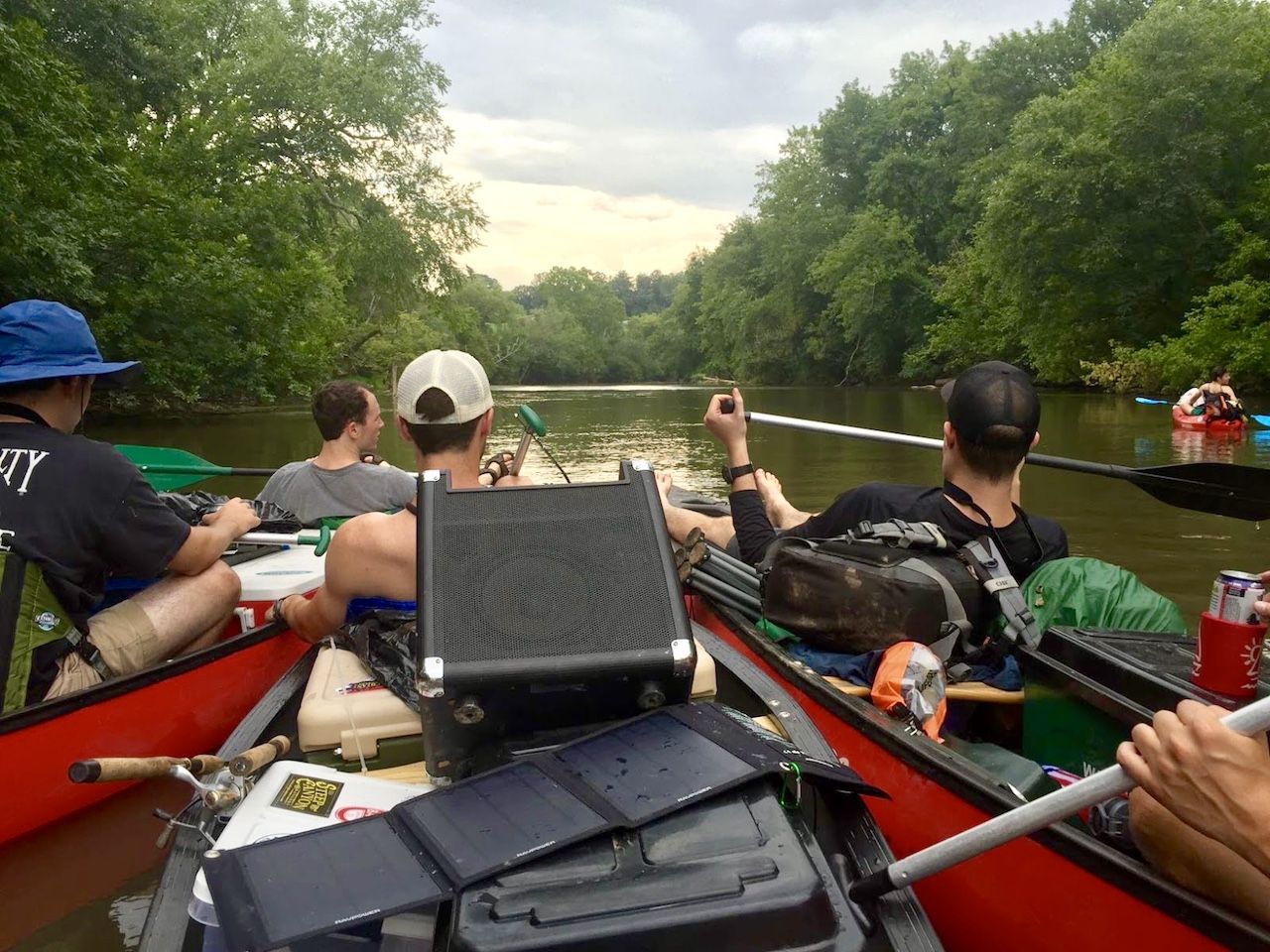 First things first: You’re going to need a boat. The trip goes faster by kayak, but you’re going to need lots of space for all the craft beer you pick up along the way, so it’s best to get a canoe. The best part about canoe camping is just how much stuff you can fit in your boat. When I’ve gone in the past, we’ve brought massive coolers, tents, camping chairs, liquor bottles, camp stoves, hammocks, bratwursts, solar chargers — even a high-powered portable speaker dubbed The Block Rocker. This is not roughing it in the remote backcountry. This is a suntanned, beer-soaked booze cruise, so don’t be bashful!

If you don’t own a canoe, worry not. The folks down at French Broad Outfitters have an armada of boats available for rent, and they happily accommodate multi-day trips, including the shuttle to the put-in. You’ll need to call to make reservations at least one week in advance, and make sure that you already have your campsites booked. Camping is only permitted by reservation at designated campsites through the French Broad River Paddle Trail website.

Camping at Rhodes Ranch for the first night and Firefighter Island for the second night is the best way to break up the mileage and maximize time spent at breweries along the way. Book your campsites at least a month in advance, especially during the summer months. One last thing: In addition to all the camping gear and booze, make sure you pack some trash bags to pick up your empties. 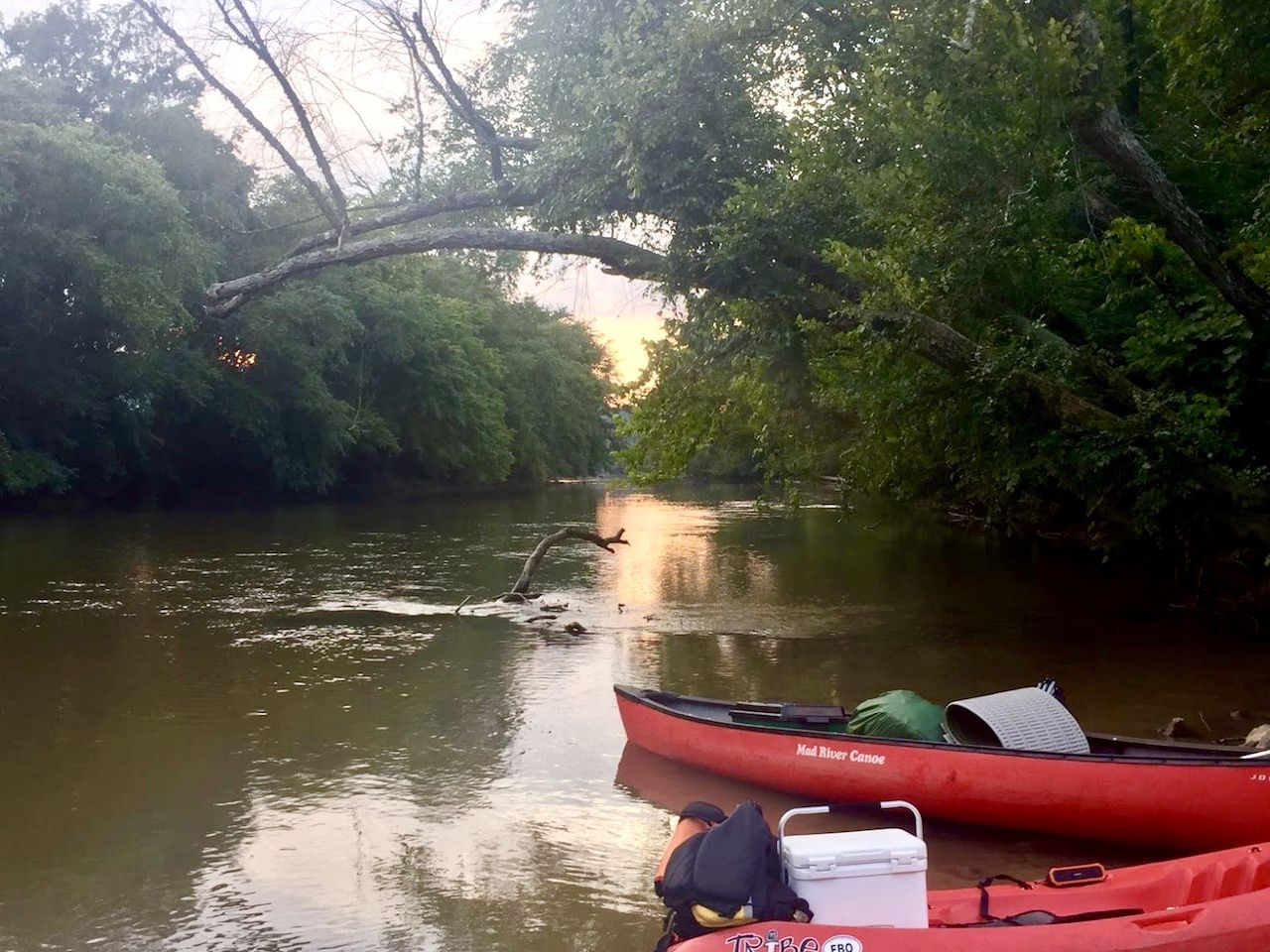 With 17 miles of paddling plus a brewery tour ahead of you, you’re going to want to get an early start. The shuttle from French Broad Outfitters will leave around 7:00 AM in order to get you to Hap Simpson Park just outside of Brevard by 8:30 AM. Either way, aim to have your canoes loaded up and on the river no later than 9:30 AM. The first five miles of paddling is some of the most technical, and it’s likely you’ll be alone for the ride.

The river is narrower and more choked here than it is closer to town, so you can expect a faster flow, plus overhanging branches, downed trees, and submerged limbs. I lost a fishing rod to an errant branch in 2016 and nearly tipped the canoe on a sunken tree in 2017, so keep your wits about you!

While the going is not so easy in this stretch, the water is quick, and you’ll be at your first take-out in no time. From the Wilson Bridge take-out, it’s only a short walk to Oskar Blues. Founded in Colorado in 2002, Oskar Blues opened its eastern outpost in 2012. Known for its laid-back attitude and cans-only approach to packaging, Oskar Blues is a staple of the region’s burgeoning mountain biking scene. Don’t be surprised to see some gnarly, mud-soaked bikers fresh off some singletrack in nearby Pisgah National Forest.

Head upstairs to the tasting room, or hang out by the outdoor bar and get some grub from the Chub Wagon, the on-site food truck. A burger and fries pairs well with Oskar Blue’s flagship Dale’s Pale Ale, a hopped-up ale with a nicely balanced malt flavor. Take a tour of the brewing facility then grab some easy-drinking Mama’s Little Yella Pils for the river.

Once you’re back on the river, it’s another 12 miles to get to Rhodes Ranch, a large partially wooded site with steps at the river’s edge for ease of access. The woods are perfect for hammock camping or getting a little shelter in case it rains. During the summer months, there should be a couple porta johns on site, so there’s no need to go squatting in the woods. Set up camp, make yourself a fire, and enjoy your first night of camping on the river. 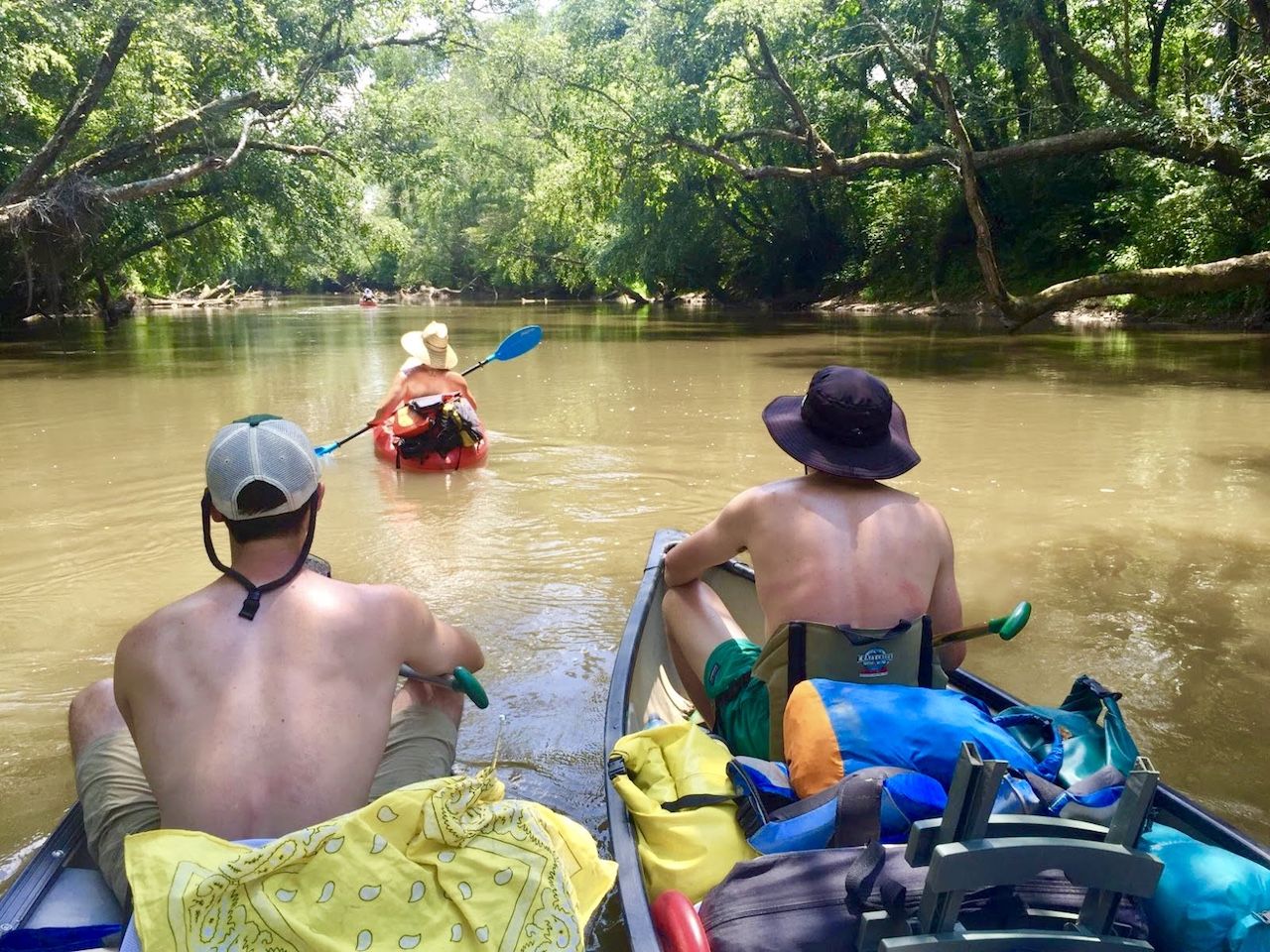 With over 20 miles of paddling total, this is the longest day on the river. It’s best to fix a quick and simple breakfast to get out on the water early. You’ll notice the river starts to open up more here, making the paddling less technical. It’s likely you will still be the only ones on the river, so enjoy the sights as you pass through cornfields and cow pastures. You’ll be on the river for 14 miles before you reach Sierra Nevada’s newly built river access area.

Based out of Chico, California, Sierra Nevada spared no expense when it opened its North Carolina location in 2015. This gorgeous, massive facility includes hiking trails, an outdoor amphitheater, a full-service restaurant, an indoor music venue, a brewing and packaging facility, and even a gift shop. For a beer lover, it’s like some combination of Disneyland, Willy Wonka’s factory, and Hogwarts. This is one of the most visited sites in the Asheville area, so make sure you call a few weeks in advance if you want to take a guided tour.

As tempting as it is to stay in this craft beer paradise, you’ll need to give yourself enough time to paddle seven more miles before sundown, so pick up a six-pack of Torpedo IPA and get back to the boats. As you near Firefighter Island, you’ll notice some highways and shopping malls heralding your approach to the Asheville metropolitan area. Be careful in this stretch; if it hasn’t rained recently the river can be super low and a loaded-down canoe could easily get hung up on the rocks and riffles. Don’t be surprised if you need to exit your canoe and pull it a bit here.

Firefighter Island can feel a little cramped for a group of 10 or more. We had 12 guys with us in 2017, and we took up every bit of flat land there was. But what it lacks in space it makes up for in character, amenities, and proximity to town. A small trail connects four or five campsites along the island, most of which are right on the river, and a picnic table and a composting toilet make life a little bit easier. Plus, when you wake up in the morning, you’ll have one of the easiest paddles of the trip, setting you up for a fantastic finale. 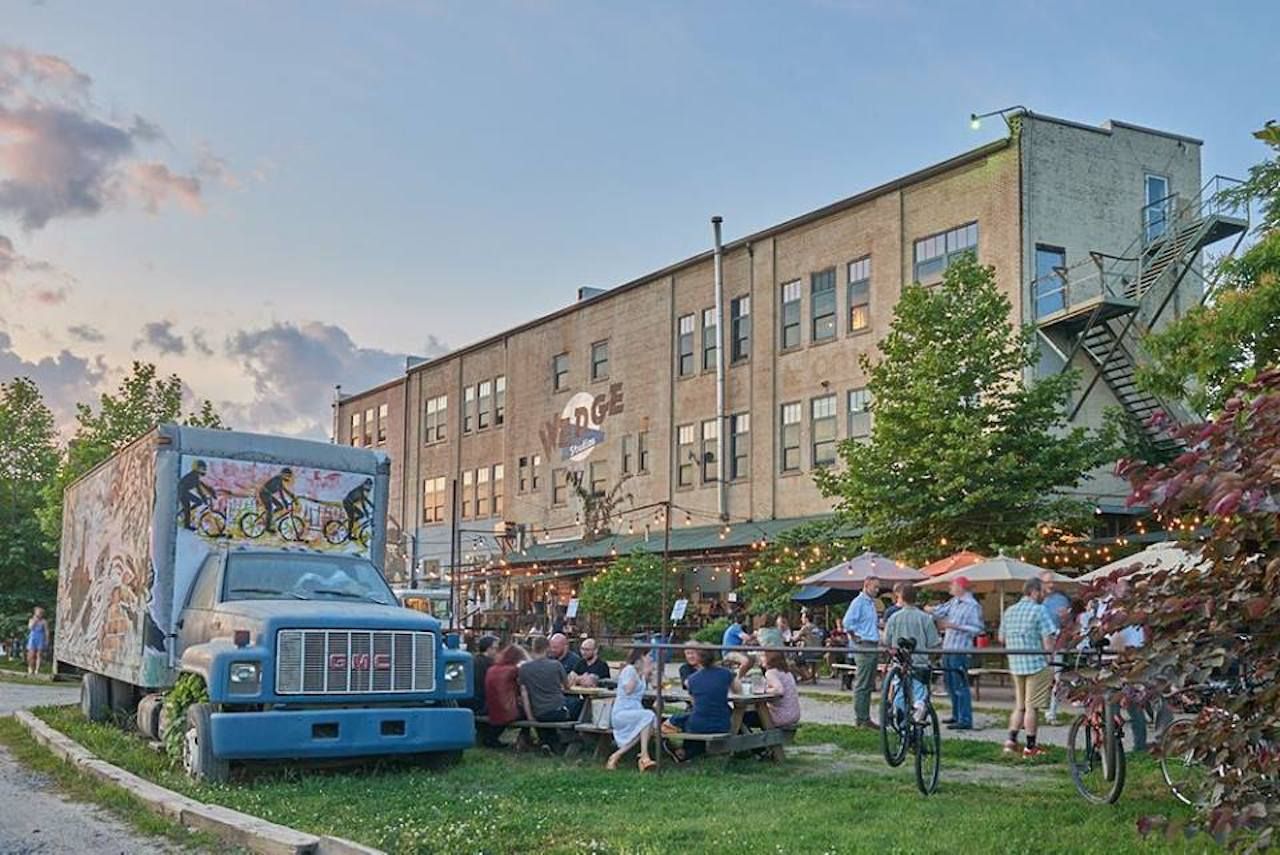 It’ll be 12 miles of paddling before you reach Asheville. About halfway through the ride, you’ll come upon the iconic Biltmore Estate on your right. The site of the largest private residence in the United States, the Biltmore bites a nearly 11-square-mile chunk out of Asheville. From the river, you’ll spot horseback riders, cow pastures, vineyards, and a glimpse of the famed 250-room chateau itself. Around this time you’ll also notice that you are no longer alone on the river. In the summer especially, this stretch of water becomes thick with boaters, tubers, and fishermen.

You’ll pass under several bridges as you approach Asheville’s River Arts District, an eclectic community of old warehouses and industrial buildings converted into art studios, chic galleries, and trendy restaurants. Scan the other side of the railroad tracks for Wedge Brewing on the right. Take out underneath the bridge and make the short walk across the tracks — watching for trains while you do — up to the brewery.

Occupying a bottom space in a converted studio once used by legendary metal artist John Payne, Wedge Brewing pays homage to the late sculptor through its outdoor patio, which is artfully assembled from salvaged metal, as well as its flagship Payne’s Pale Ale. Pick a seat in the shade, go play some cornhole, or grab a bite from one of the many excellent food trucks on rotation. But don’t fill yourself up yet. There’s still one more brewery to go.

After getting back in the water, it’s just a short float less than a mile downstream to New Belgium Brewing Company. Although you’ll see folks waving to you from the tasting room deck on the left, the take-out is going to be on the right side of the river. After crossing the bridge you’ll find two buildings on site. One is the massive brewing and packing facility, which you can tour — complete with a slide to take you to the bottom floor. The other is the tasting room, dubbed the Liquid Center or LC. In between and all around you’ll find an expansive and beautifully landscaped area complete with Adirondack chairs, cornhole boards, and even a fire pit. While New Belgium’s beers are available nationwide, the Asheville location keeps a few unique small-batch beers on rotation, so grab one from inside and head out to the back deck to wave at your fellow boaters and look back at the river that brought you here.

Once you’ve had your fill of beer, it’s just another couple of miles downriver to French Broad Outfitters, right back where you started three days ago. If you played your cards right you should have a nice tan from your time out in the sun, perhaps a bit of soreness from 55 miles of paddling, and maybe a little beer belly from all the craft brews.

But if you’re still looking for another drink on the river, head down the road to The Bywater where local brews and craft cocktails are served out of a cabin right on the French Broad, so you can continue your river revelry. After all, when you find something this good, why give it up?

CyclingYou can bike your way down this beer trail in British Columbia
Tagged
Paddling Beer Trip Planning Asheville, NC, United States
What did you think of this story?
Meh
Good
Awesome

The best Airbnbs in Asheville, from an urban treehouse to a coffee shop loft

Why Asheville is the best getaway you can take this winter

Sights and sounds from the world’s gnarliest kayak race

England can save its bars if everyone has 124 more pints in 2021, study finds