Setting up the proper home kitchen is practically a rite of passage when entering adulthood. For many people in America, that means stocking our shelves with the classics, like a quality knife set and skillet, and trendy appliances, like a dutch oven, Instant Pot, and air fryer. Cuisines from all over Asia are wildly popular in North America — from sushi to pho to soup dumplings — but there are probably more than a few amateur home cooks who may not have considered implementing Asian kitchen tools in their own kitchens.

The executive chef of Morimoto Asia, Yuhi Fujinaga, thinks more Americans should experiment with Asian kitchen tools. Many of these appliances, like a rice cooker for instance, are found in kitchens across Asia, where they are just as popular as the Instant Pot is in America. But there is a good reason that tools like a delicate grater and an ultra-sharp mandolin enjoy ubiquitous status in Asia: These tools are versatile, precise, and make your food look good and taste better.

Though Chef Fujinaga is Japanese, he received his culinary training in Western kitchens. During his training, he discovered that the quality of the ingredients is just as important as the techniques and tools used to prepare them. Still, there are a few appliances he highly recommends that every home cook should own to make their process in the kitchen smooth and seamless.

Here are five Asian kitchen tools Chef Yuhi Fujinaga considers essential, and how to use each one. 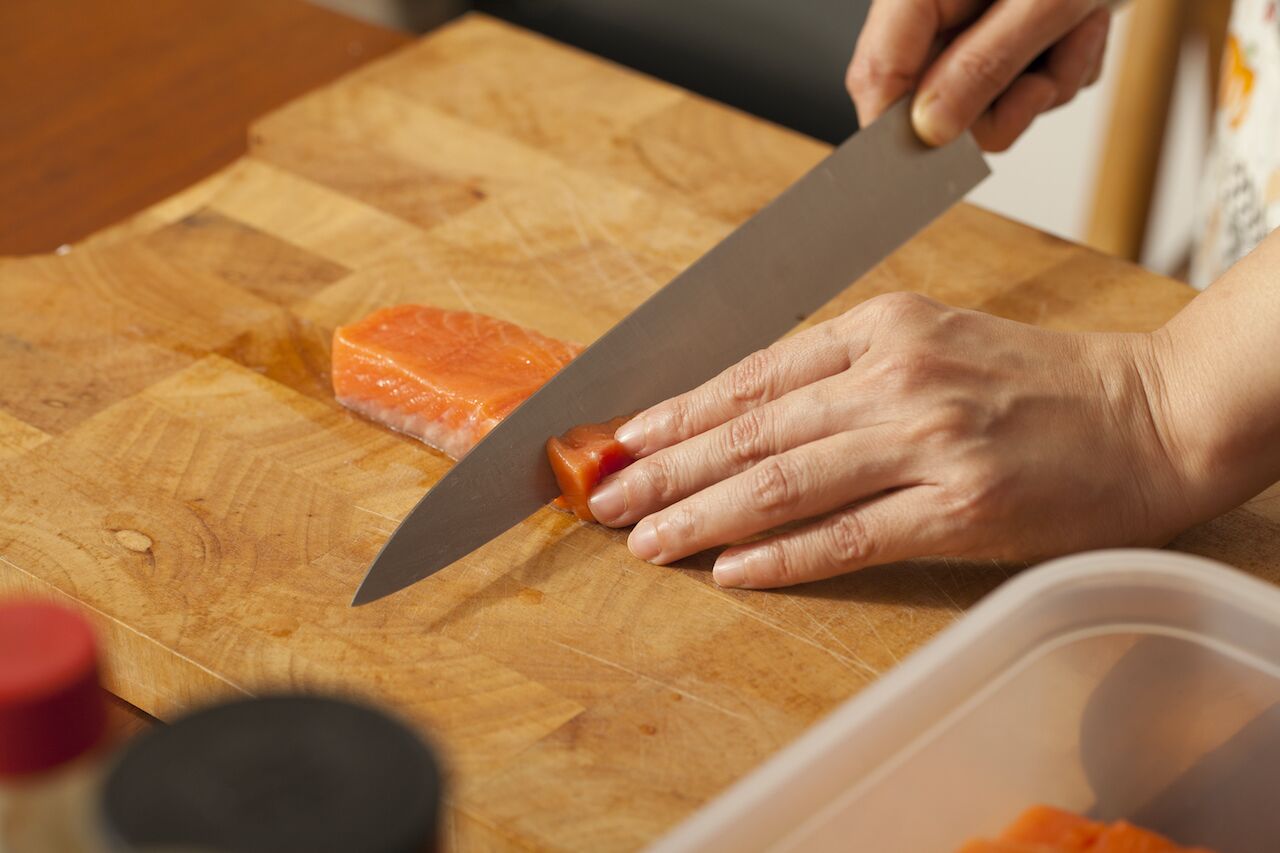 Knives are an important part of the kitchen and usually one of the first investments we make in our own spaces. Before making a financially binding decision, Chef Fujinaga let us in on a little secret.

“Most top chefs in the world all use Japanese knives. Their thinner blades make sharpening easier and they are easy to handle,” he says.

Japanese knives are created using traditional Japanese blacksmithing techniques. Unlike the stainless steel we are accustomed to in America, these are traditionally made from a type of steel called Hagane, the same material used to make Samurai swords. The handles on Japanese knives are typically easier to handle and the single-bevel blade is marked by an extremely sharp edge. They inherently require more care and maintenance — as chipping is not uncommon— than American knives but are more adept at basic cooking tasks like chopping vegetables, garlic, ginger, and other essential ingredients. 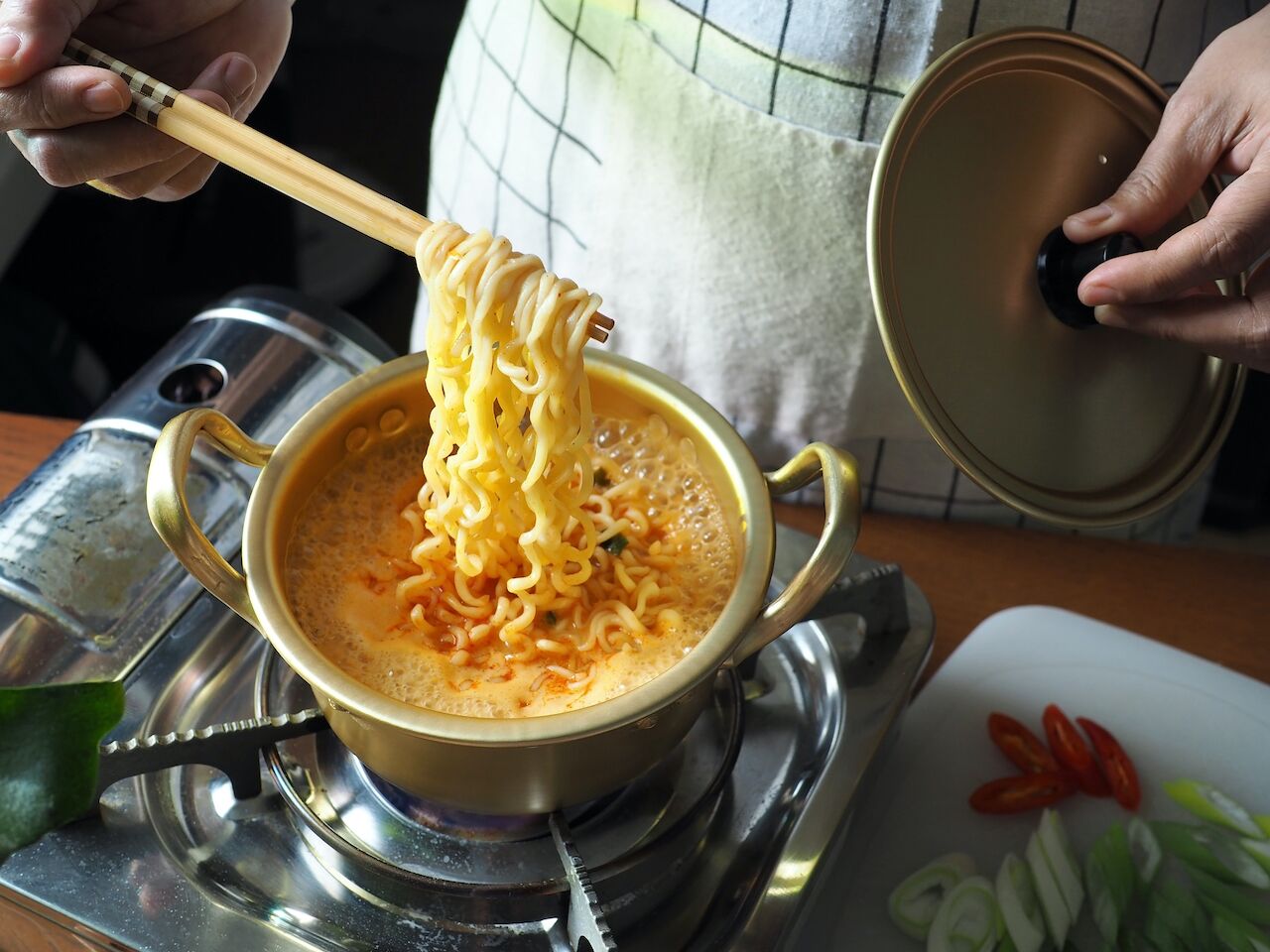 America has its forks, but in East Asia, the utensil resting in your hand is a chopstick — and it’s not just used as a tool for eating: A longer set of chopsticks can also be for cooking dishes like meat and stir fries.

“It’s an essential tool in Japanese cooking,” Chef Fujinaga explains, “We use them for everything. It’s like the Americans using tongs. It’s much more delicate so the items you’re picking up don’t get ruined.”

Chopsticks can also be used in instances where a spoon won’t suffice — like when preparing dumplings, noodles, or soups. However, they are an extremely versatile kitchen tool that can be used for even the most menial kitchen tasks, from gently scrambling eggs to stirring soup or stock.

An efficient and fast mandolin 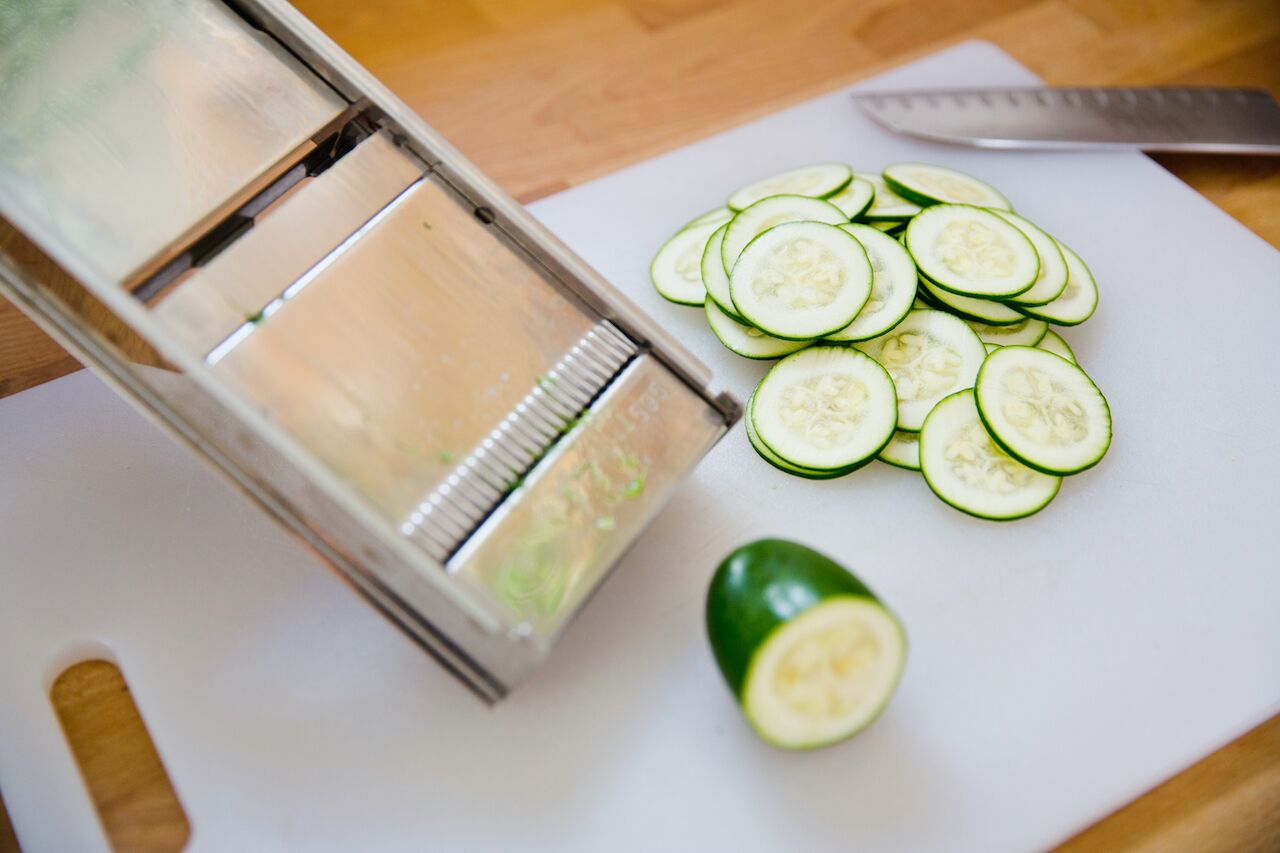 Most people with busy schedules are looking for ways to streamline our process in the kitchen. Enter the Japanese mandolin. This all-in-one device uses steel blades to ribbon, round or matchstick cut everything from carrots to beets effortlessly and quickly in seconds (just be careful. Even the most amateur home cook can fake professional skills using this tool. The mandolin produces uniform cuts that will cook more evenly.

“It’s the secret if your knife skills aren’t at the professional level,” adds Fujinaga. “This one equipment will get you slicing like the pros.” 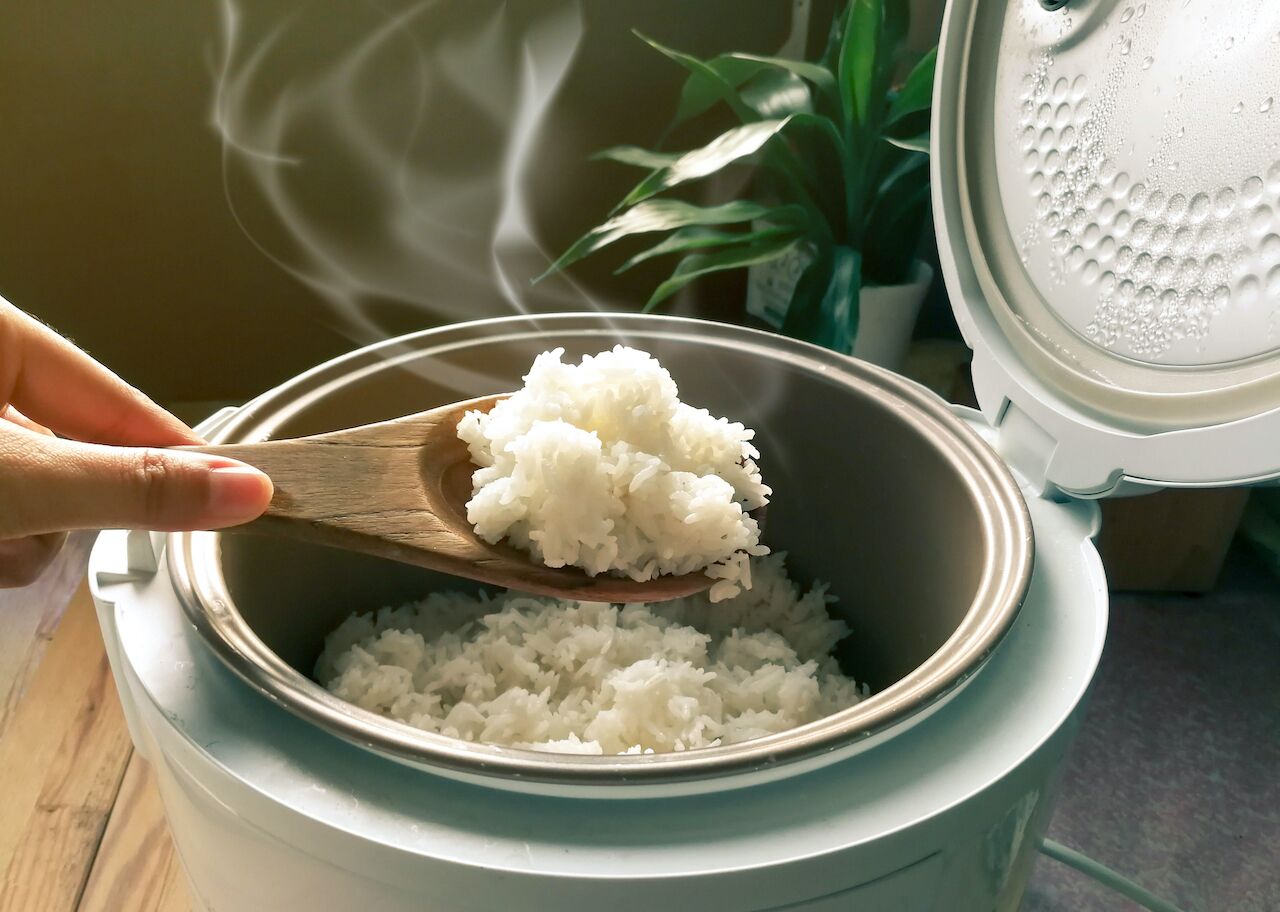 Rice cookers are ubiquitous appliances across Asia, about as common as say, a microwave is in America — and for that matter, they are becoming more and more common in Western households, too. Rice cookers do exactly what the label says, cooking rice for all sorts of tastes including fluffy rice for side dishes and rice with a sticky texture that you might use for sushi.

“The rice cooker is one of the most versatile kitchen appliances and a very vital piece of equipment in the kitchen,” proclaims Fujinaga. “Every Japanese household has one. Nowadays these rice cookers are much more than rice cookers.”

A rice cooker goes far beyond cooking rice. It can also serve as an all-purpose steamer and can braise chicken and pork dishes. Entire meals — including hearty stew or fall-off-the-bone ribs — can be fully prepared in one. 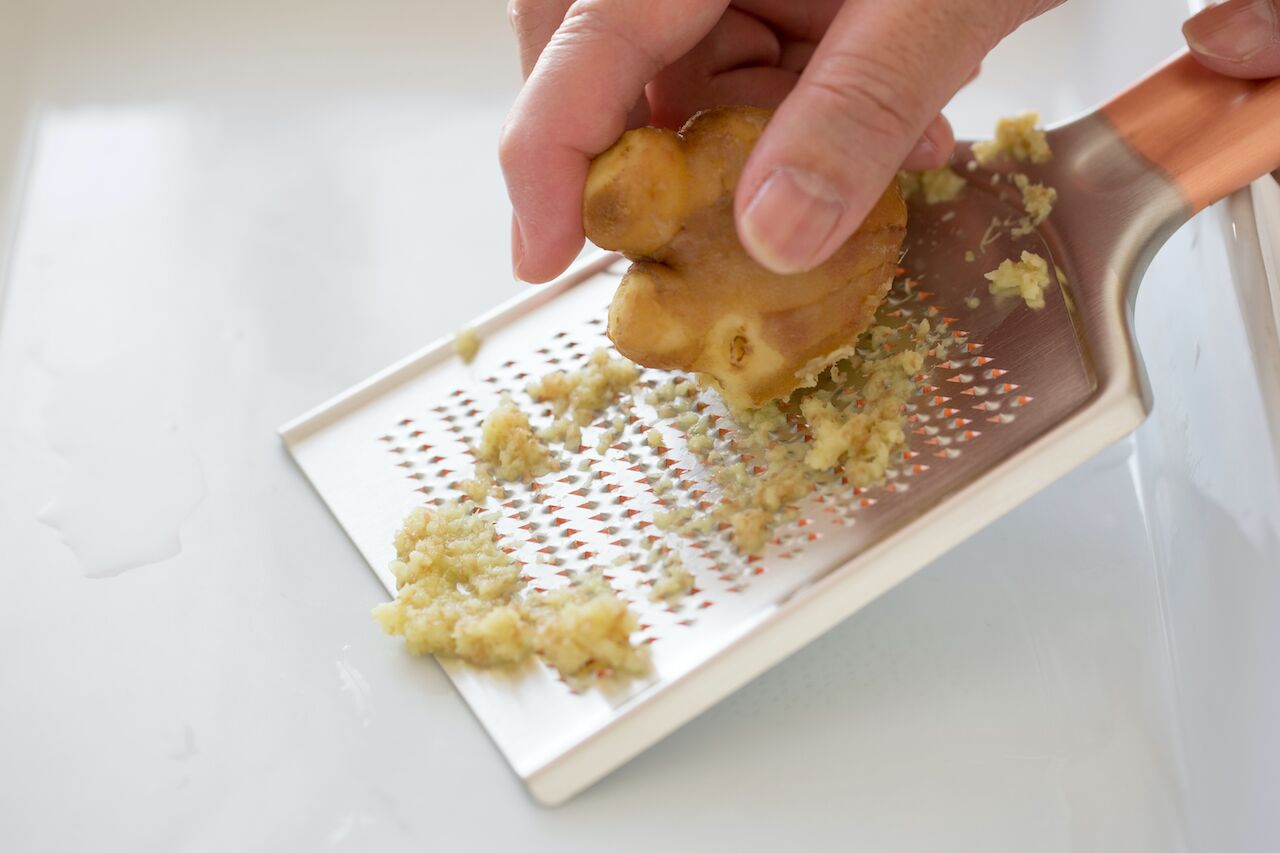 A bulky cheese grater may be a common staple of the American household, but the more compact, precise Japanese version is just as useful. Often made from copper, it’s typically used to finely grate ginger and garlic, but can also be used on ingredients like nutmeg and carrots.

“Sometimes we use this so much that we forget about the small things as it’s used to grate a lot of vegetables and fruits,” Fujinaga explains.

Unlike the cheese grater, the Japanese grater lies flat offering a level of stability and ease to the user. Fine slivers of raw vegetables can freshen up a dish, and the grater eliminates the need for a food processor or hand slicing. Even what seems to be the most basic tool can be a total gamechanger for the kitchen.