It’s easy to go down the new-food rabbit hole when we travel. Unfamiliar ingredients, fresh techniques, and the dishes that result from their marriage add flavor to our trips, literally and figuratively. Amateur chefs with a penchant for exploring, and eating, all across the globe tend to collect recipes like they do visas, stocking up on souvenirs like cookbooks and hard-to-find spices to recreate their favorite new dishes back home. But the tools we use in the kitchen have just as much of an impact on how meals come together, particularly where time-honored recipes from foreign countries are concerned. For traveling home cooks looking to grow their kitchenware collections, or those in need of souvenirs for food-obsessed friends, here are some essential utensils to look out for on your future travels. 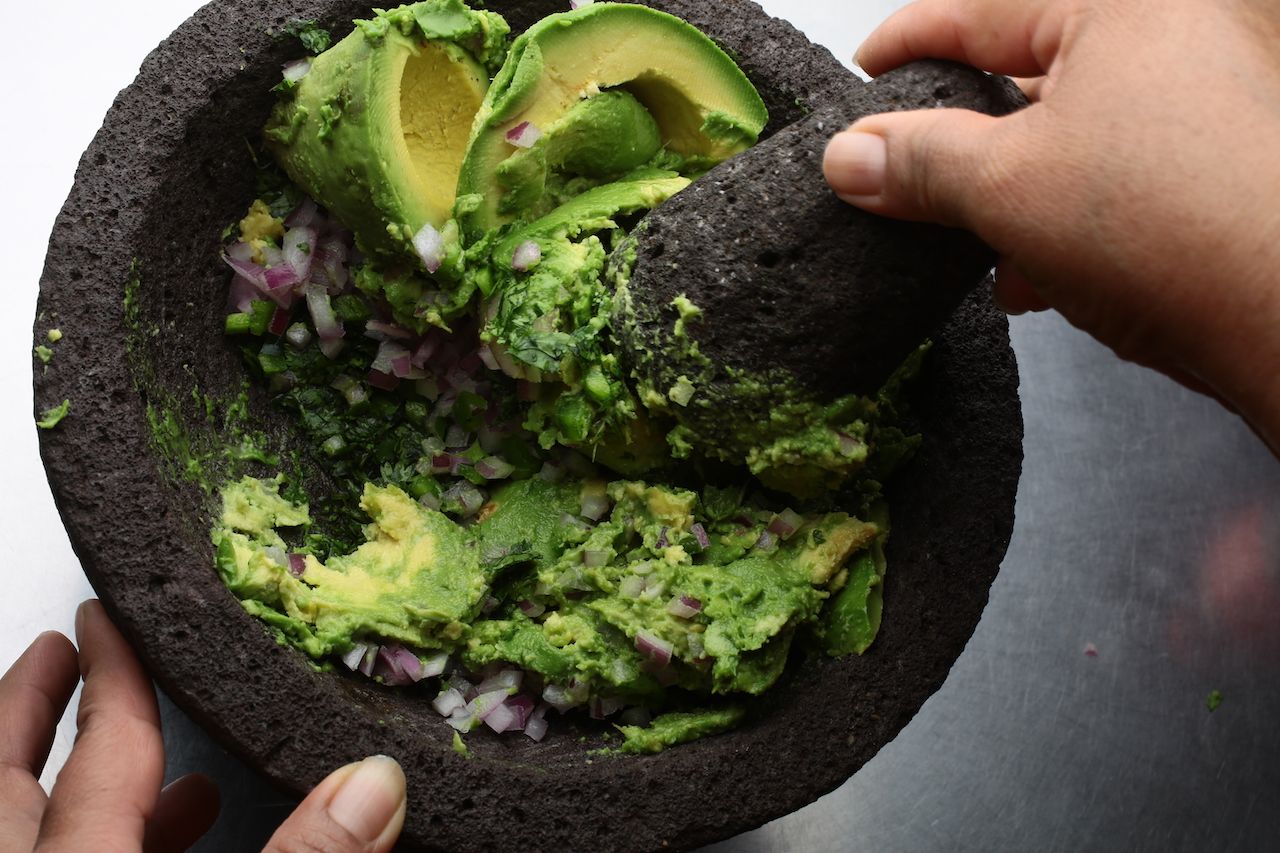 A molcajete is a large, traditionally stone mortar and pestle used to make salsas, guacamole, and other ground or mixed foods. In Mexico, molcajete specifically refers to the bowl while the pestle is a tejolote, sometimes called a mano, meaning hand. The pre-Hispanic food processor is essential if you’re interested in cooking Mexican food. Sure, you could use a blender to pulverize your ingredients, but by grinding rather than chopping, molcajetes release natural oils and flavors, and achieve finer textures than their modern counterparts.

Japanese cooking utilizes all sorts of tools worth stocking in your kitchen, from the oroshigane grater that guarantees a finer yield than a regular grater, to the square tamagoyaki pan that’s integral to making Japanese omelettes. If you have to choose one, however, we recommend gifting yourself an otoshibuta as a souvenir. Otoshibuta are round wooden drop lids designed to sit on simmering liquids so the heat distributes evenly, letting you off the hook from constant stirring, and preventing an all-out boil. 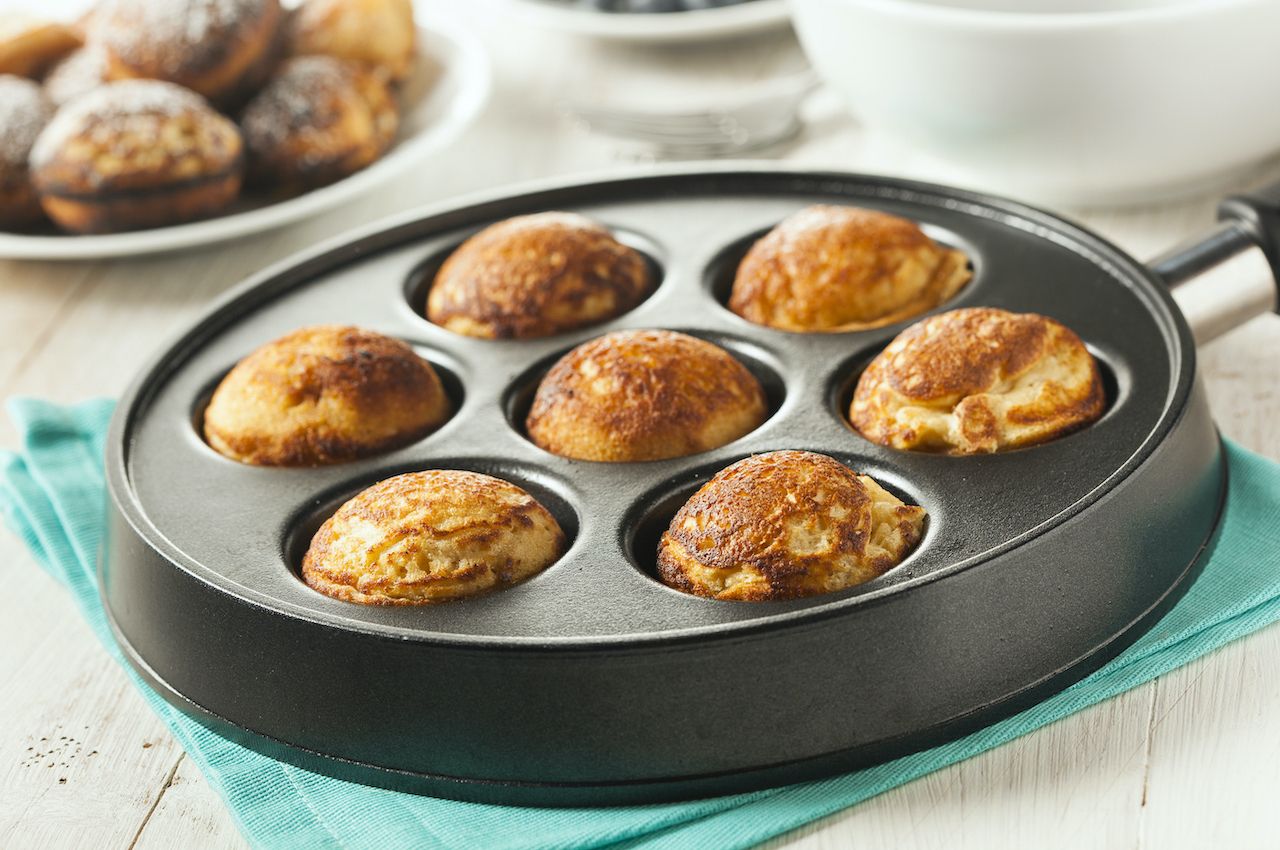 Aebleskiver are light, puffy pancake balls from Denmark that’re particularly popular come Christmas. They’re made in cast-iron pans with seven separate craters for dough. This may seem like a specialized tool that’s only good for making aebleskiver when the mood strikes, but the classic Danish tool is surprisingly versatile. It can be used to make any number of baked goods, including muffins and mini cakes, as well as savory treats like no-fry hush puppies, breakfasts bites of all varieties, and takoyaki, or Japanese octopus balls. 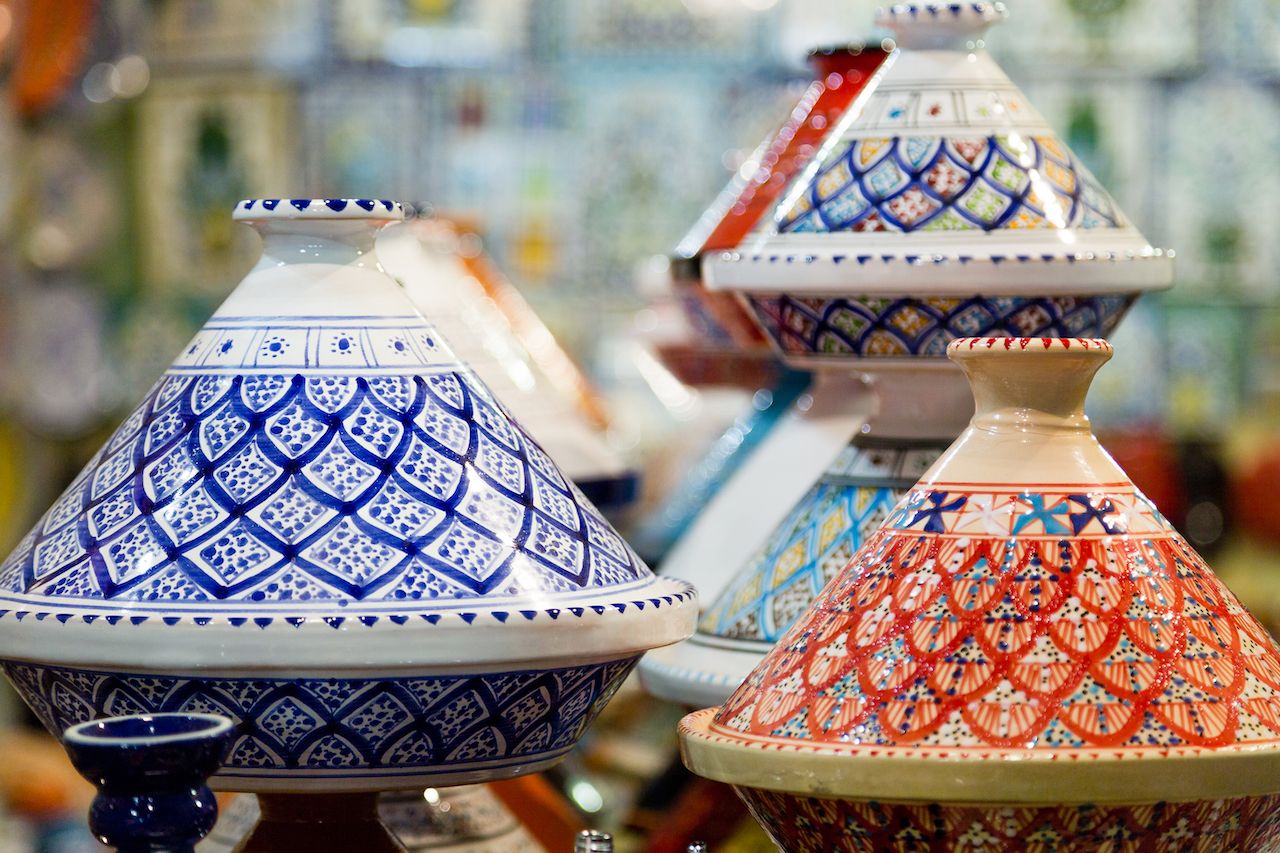 A tagine is both a North African dish and the earthenware pot in which it’s made. Tagines have two parts: a circular base, which is placed directly on hot coals, and a conical cover with a small crater for cold water to help trap steam and collect condensation at the bottom of the pan. The ceramic material, typically brightly painted, helps regulate heat, though a thin metal round called a diffuser can be placed under the tagine when cooking on the stovetop to avoid cracks.

In Morocco, tagines are primarily used for stew-like dishes made with meat, often lamb; fruits, often dried, and veggies; spices like paprika, saffron, cumin, turmeric, ginger, and cinnamon; and garnishes ranging from cilantro and parsley to pomegranate seeds and slivered almonds. In Tunisia, the cookware’s namesake dish more closely resembles a frittata. Traditional recipes aside, tagines are excellent utensils for many one-pot, low-and-slow dishes.

A batirol is a wooden whisk unlike any you’ve seen in a kitchen supply store. It’s similar to the molinillo used throughout Latin America. The batirol is used to create a foamy layer on top of warm beverages like tsokolate de batirol, which is Filipino hot chocolate, and atole, a masa-based beverage from Mexico. Nothing’s stopping you from whisking some froth onto your daily cappuccino, however. The baritol is a solid, carved piece of wood that’s meant to be twirled rather than the metal, Western-style whisk you might be used to. If nothing else, it’s a lot more fun to wield. 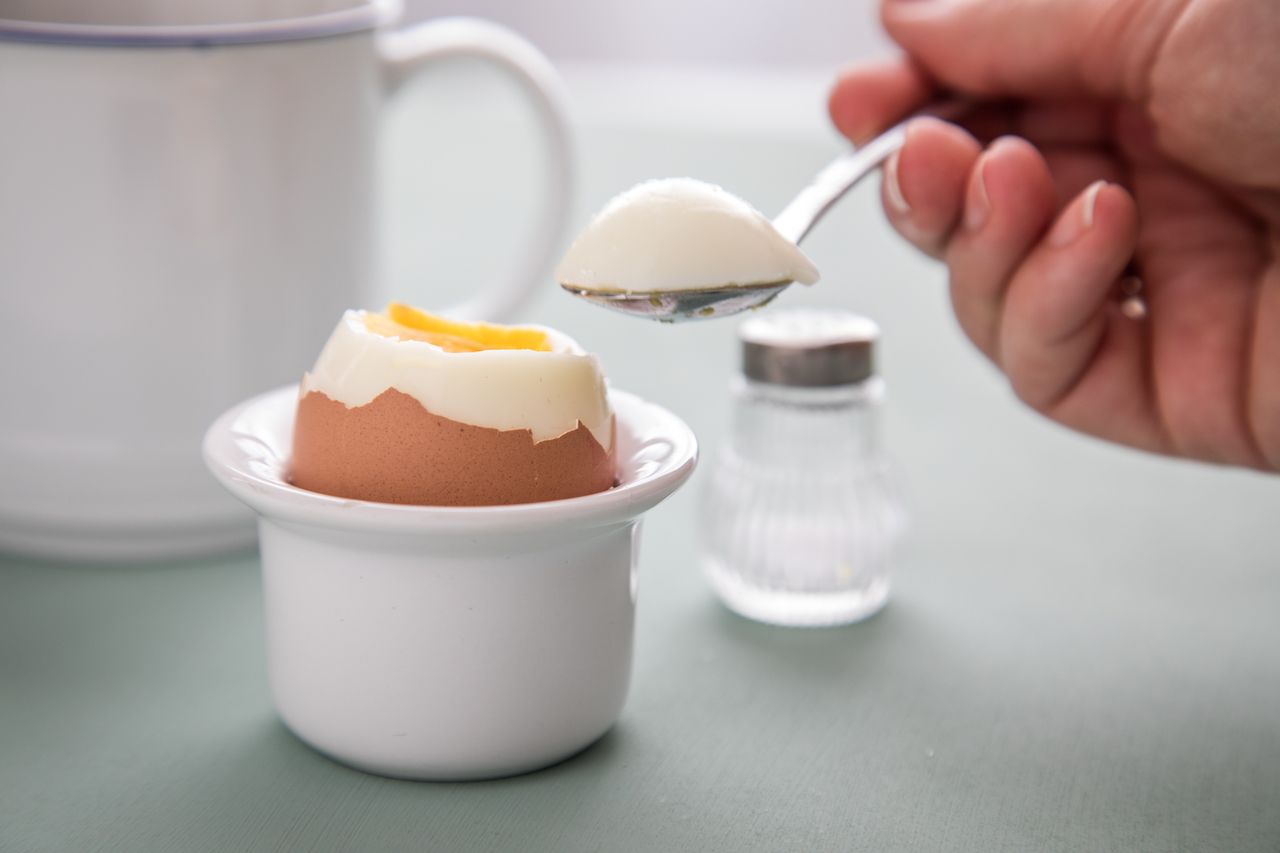 There’s an old rule that says you shouldn’t eat eggs with a silver spoon. In Germany, soft-boiled eggs are a staple breakfast food, particularly on Sundays, and they’re eaten with small plastic spoons called eierlöffel. These egg spoons are cheap, easy to store, and often pastel-colored, making them a fun and, depending who you ask, necessary addition to your utensil drawer.

If there’s one item on this list that gets points for practicality, it’s the flessenschraper, or bottle scraper. Similar to a spatula, it’s specifically designed to get those hard-to-reach spots at the bottom of jars and other rounded or narrow-mouthed containers. In the Netherlands, it may be used to scrape out the last delicious bites of speculoos spread, or cookie butter. 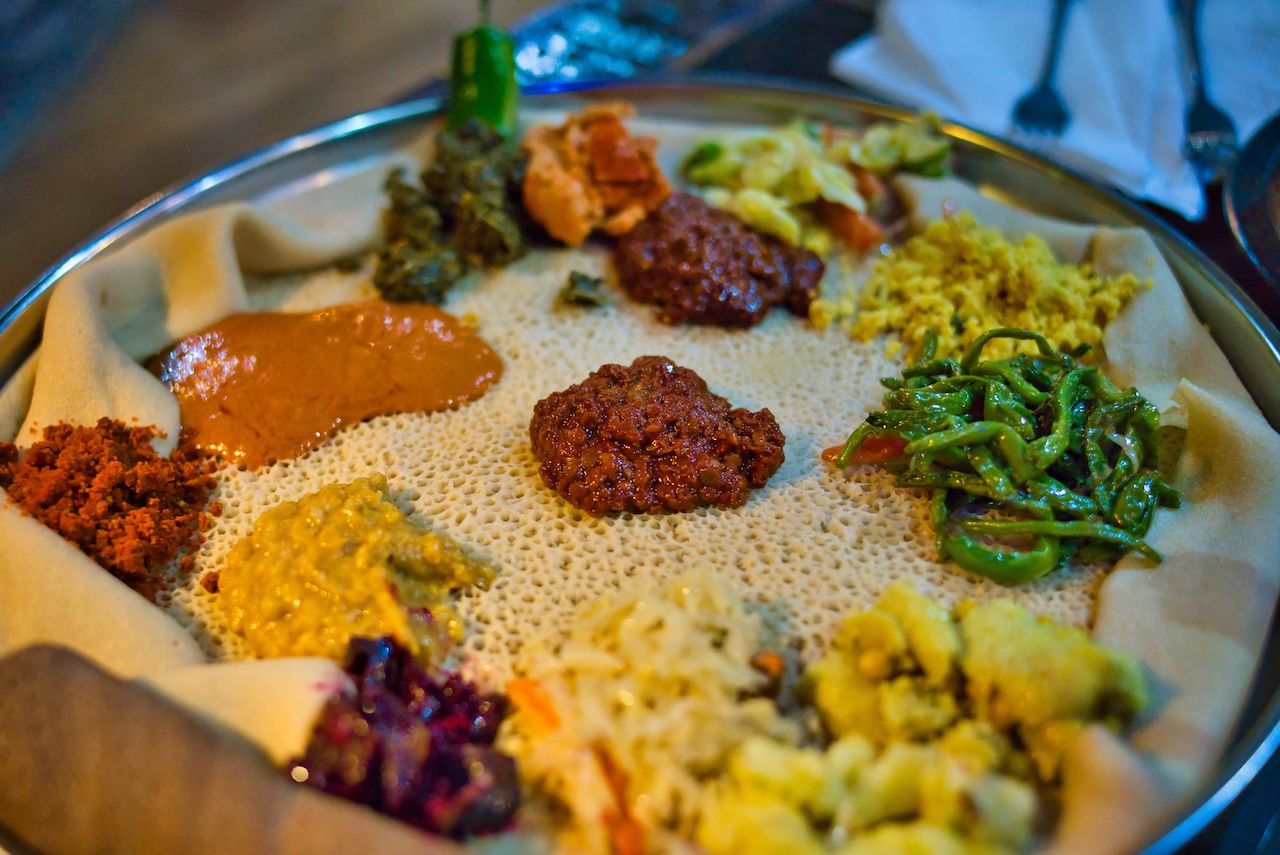 Injera is a spongy, slightly sour fermented flatbread that doubles as a serving platter and grab-as-you-go wrap for various traditional stews. It’s the national dish in both Ethiopia and Eritrea, and it comes with its very own utensil. An injera paddle is like a cross between a spatula and a pizza paddle, making it a handy utensil to keep around whether you need to stir big batches of batter or remove large, delicate rounds of cooked batter from heat. 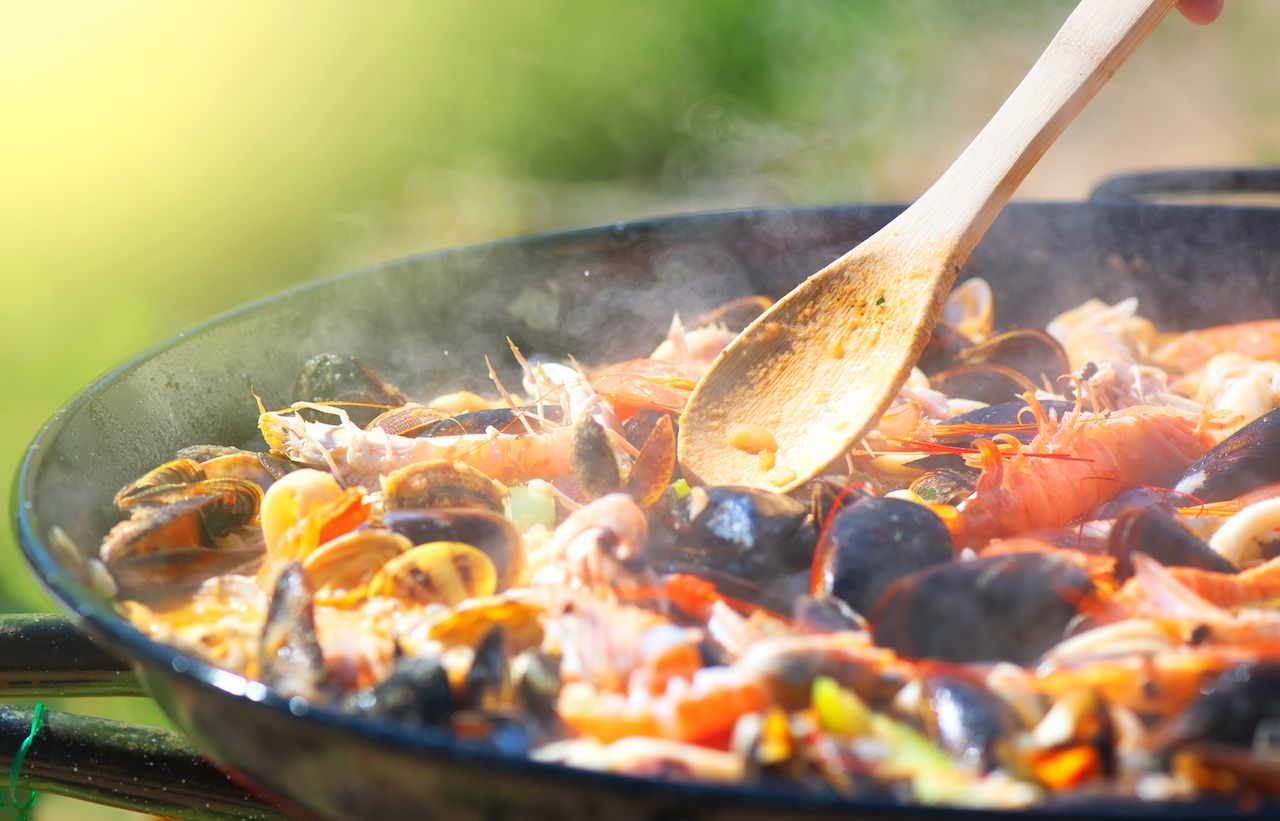 Paella is one of most recognizable Spanish dishes not found on tapas menus. Made with rice that’s dyed yellow by saffron, various paella recipes are loaded with meat like chicken or chorizo, seafood like prawns and shellfish, and add-ins like lima and green beans. Paella pans are wide and shallow, allowing everything to cook evenly and crisp up nicely, especially the bottom crust, or socarrat. It’s not the easiest utensil to store in a small kitchen, but its uses are limitless: Griddle up pancakes in the morning, roast a chicken and veggies for lunch, or sear up the perfect steak for dinner. Plus, there’s no lid, so it’s easy to nest with your other skillets. 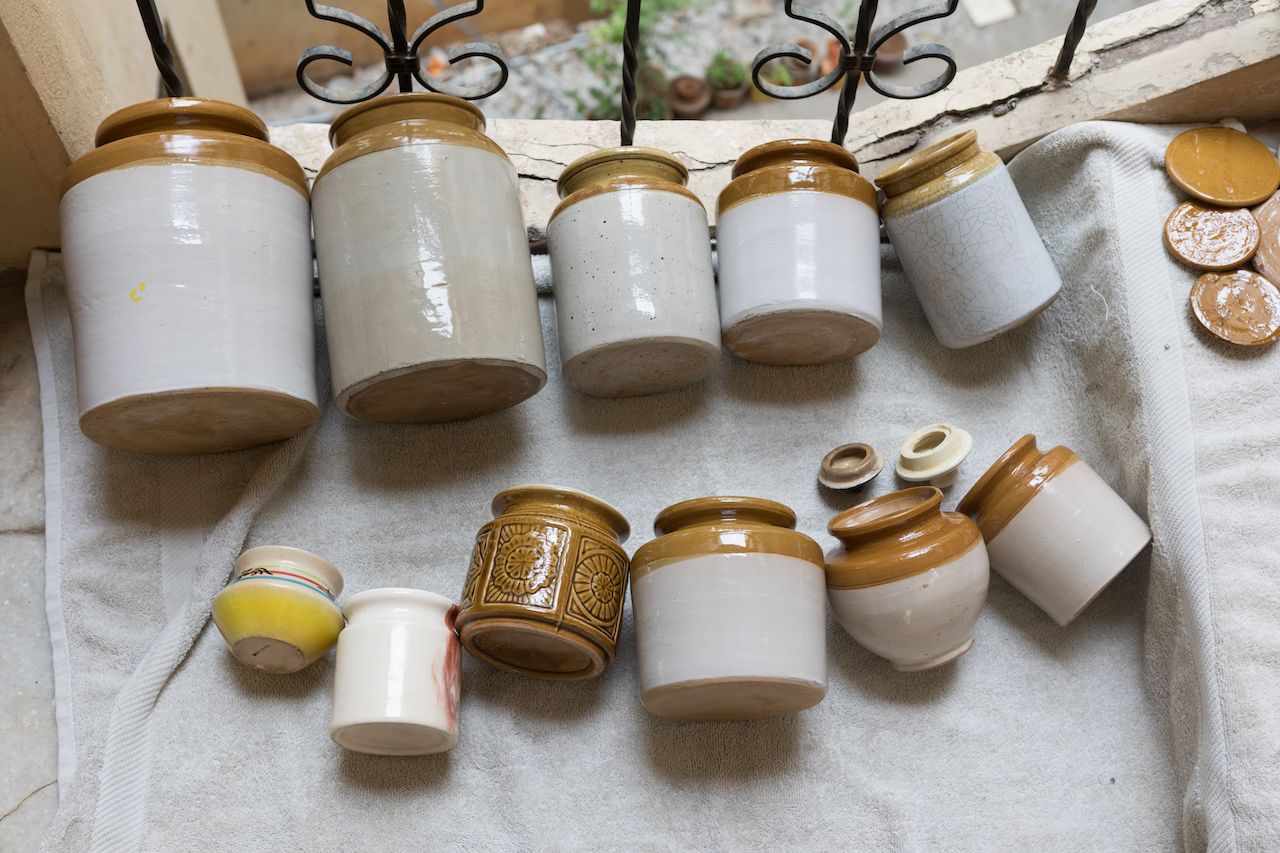 If your idea of cooking involves mixing milk and cereal, it’s probably not worth lugging a heavy ceramic pickling jug back in your suitcase after a trip to India. If, on the other hand, you treat your kitchen more like a laboratory, you’ll love having a martbaan on hand. Not only the perfect storage vessel for homemade pickles and other pickled foods, or achaar, martbaans also make excellent serving dishes for everything from chutney to yogurt. 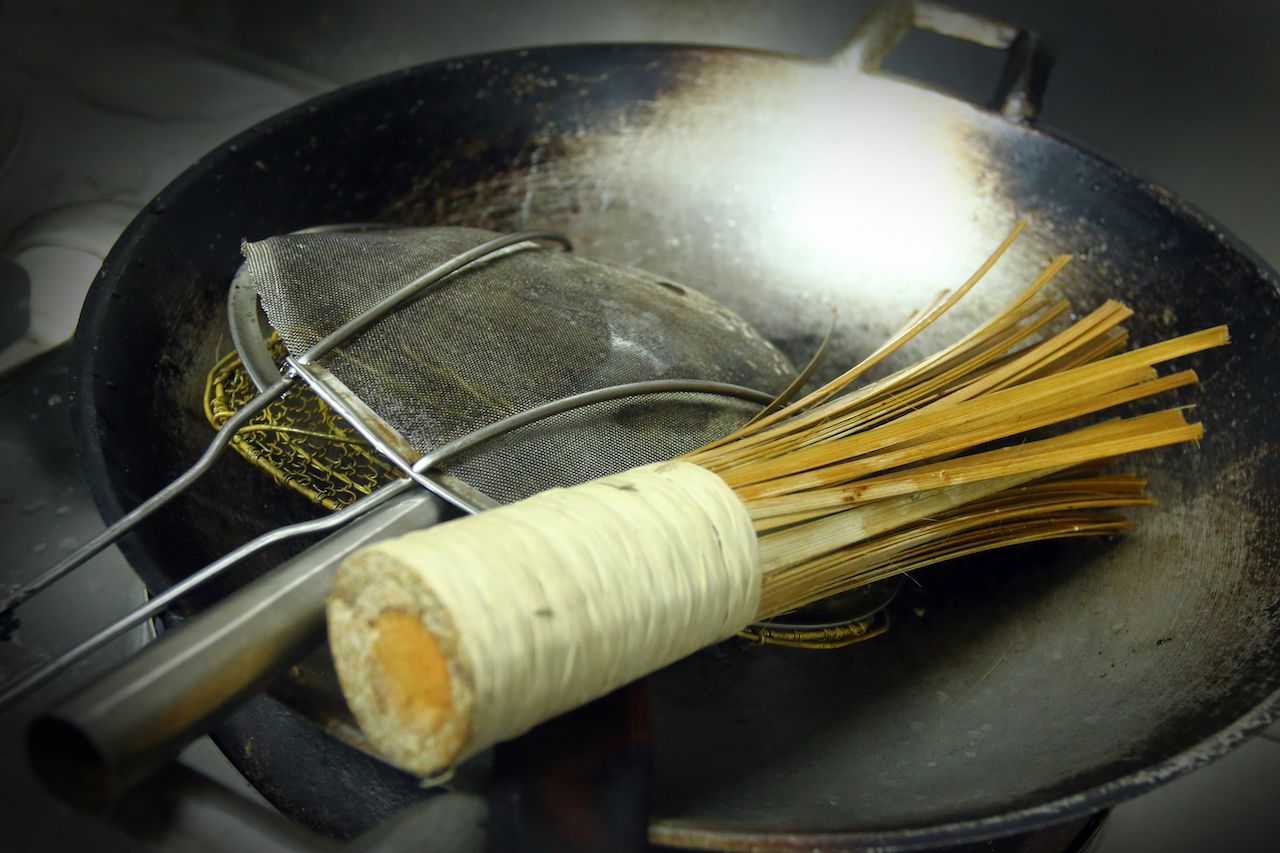 Like tagines in North Africa and paella pans in Spain, woks are cornerstone cooking utensils in China. They’re a must-have if you’re a sucker for stir-fry, or really any type of stovetop cooking, but even more than the wok itself, we recommend picking up a wok brush. Made from bundled bamboo stalks, wok brushes are tough enough to deep clean but gentle enough to avoid damaging woks and other pans. All they require is some hot water and elbow grease, and they’ll work on anything from steel skillets to cast iron. While you’re at it, pick up a Chinese bamboo skimmer for all your straining needs, and thank us later. 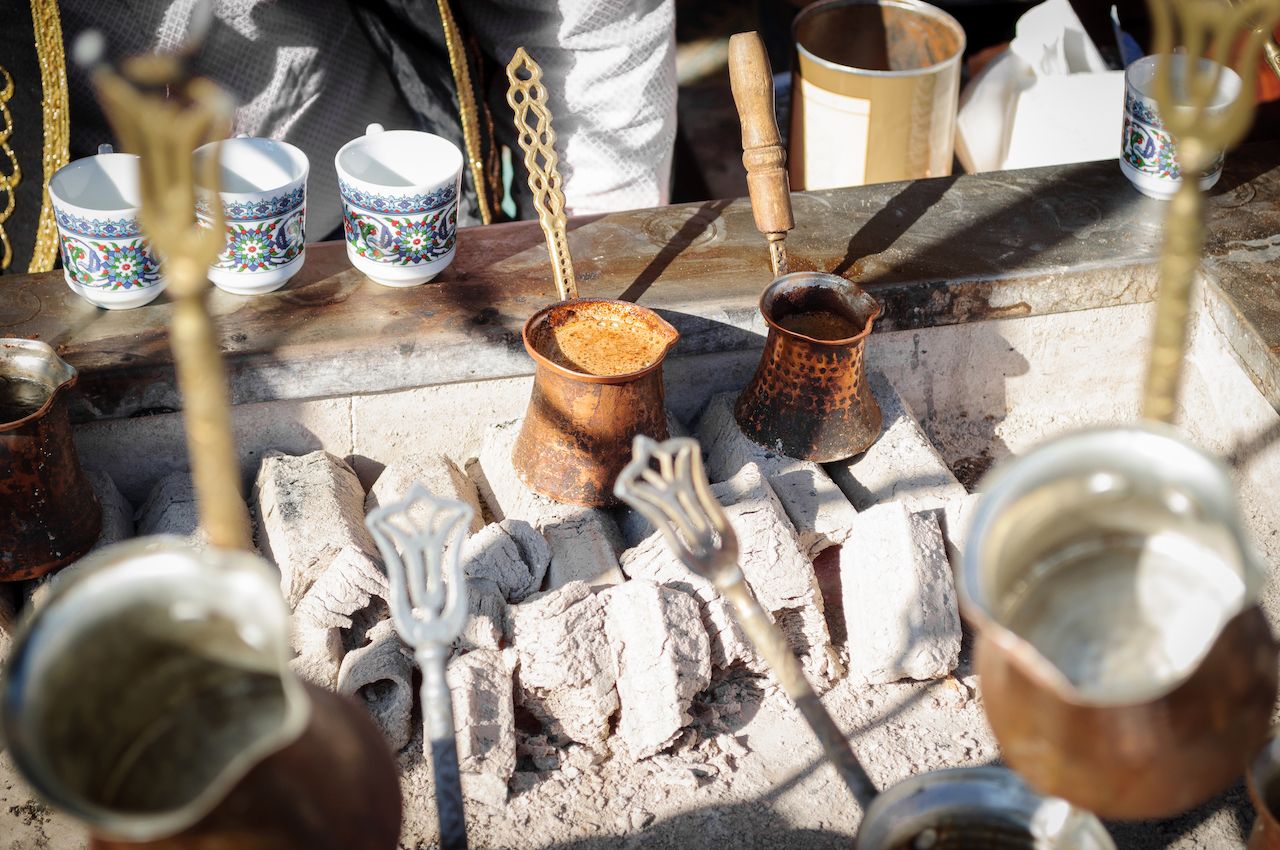 Coffee culture spans continents and centuries. Many countries have their own go-to tools for brewing the perfect cup, from the Italian moka pot to the northeast African jebena. In Turkey, a traditional coffee pot is called a cezve, also known as an ibrik in other parts of the world. They’re typically made from copper or brass and have long handles and a spouted lip for ease of pouring. Relatively small, they yield the perfect amount for your morning coffee or a couple of smaller, espresso-sized cups to share with family or friends. 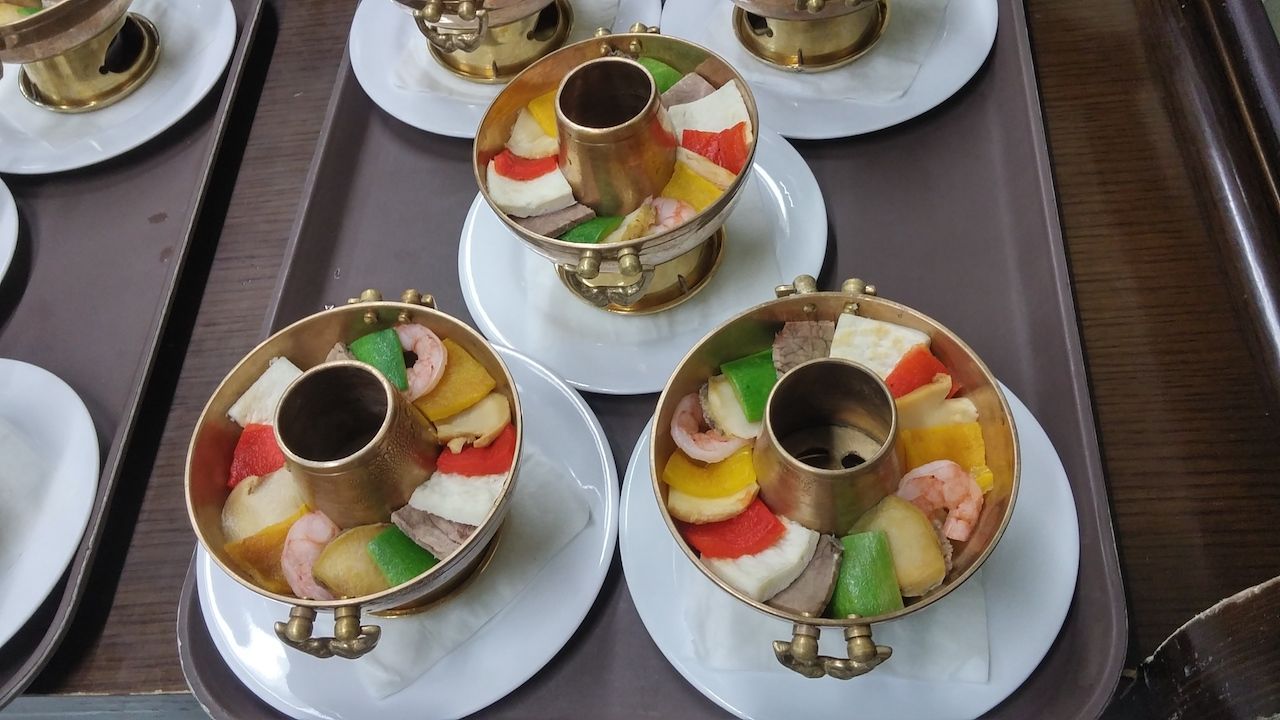 Korean cuisine comes with its own set of kitchenware, including various pots like the gamasot and dolsot. Nothing is as essential as the sinseollo, or royal hot pot, though. The name refers to both the dish and the vessel, which has a well in the center for broth and an attached dish that holds ingredients to dip in and let cook, from raw vegetables to raw meat. It’s a similar principle to a fondue pot, or caquelon, but Korea’s sinseollo is an even-more-convenient, all-in-one utensil. It may not be the most versatile piece of kitchenware out there, but as soon as you host your first hot-pot party, you and your loved ones will quickly become converts. 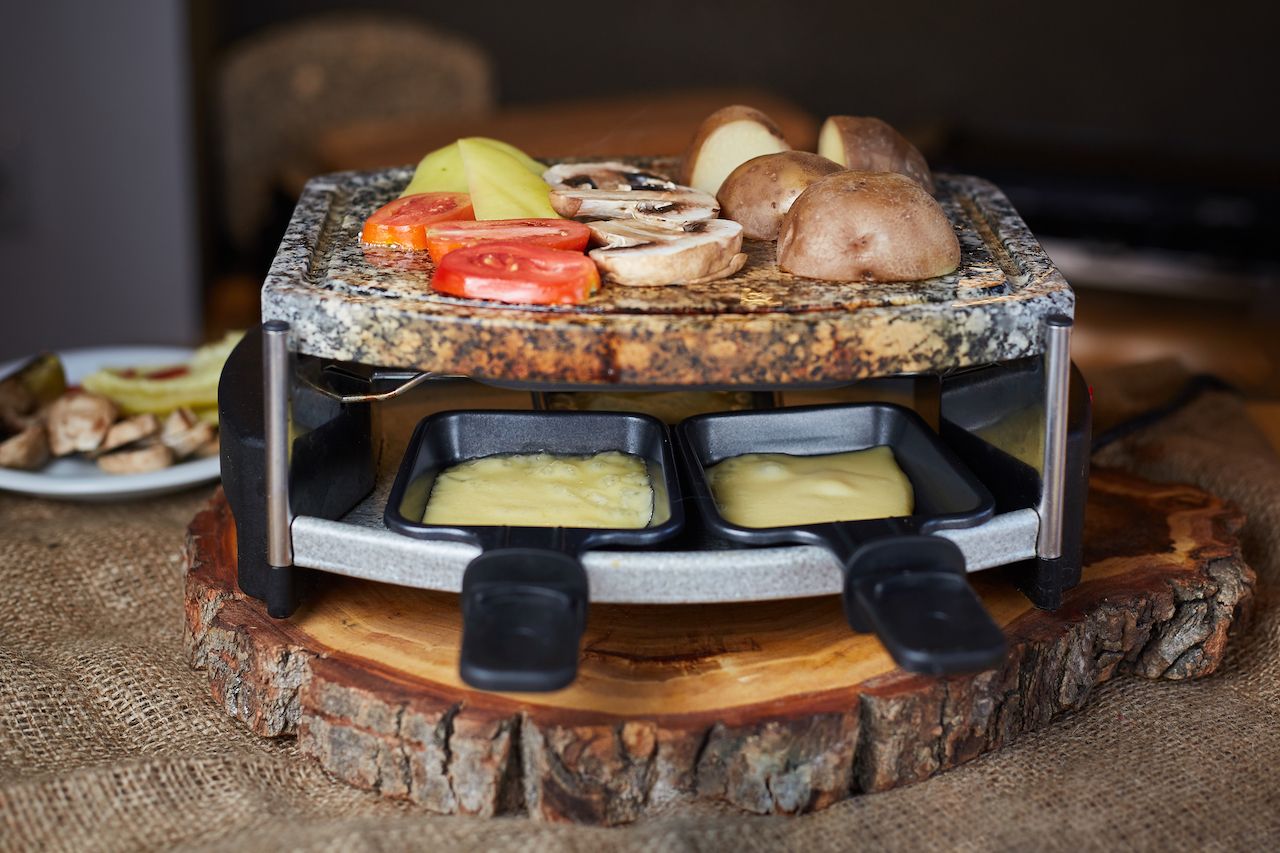 The Swiss certainly got it right when it comes to serving up gooey cheese. Fondue is one of the country’s most iconic meals, but dare we say it, raclette might be the superior cheese dish. Rather dipping bread, potatoes, and other skewered foods into a big bowl of deliciously viscous cheese, raclette diners scrape away layer after layer of perfectly melty cheese from a half-wheel while munching on sides like cornichon pickles, boiled potatoes, and thinly sliced meats like ham and viande des grisons, or air-dried beef.

To make it easy to serve raclette at home, get yourself a raclonette, an electrical appliance that includes grill pans meant for melting individual slices of cheese atop a griddle. It’s not the ideal tool for getting that butter-soft yet slightly crusty texture you want from raclette, but stick a raclonette in the center of your dinner table, and no one will be complaining.

Go to Sri Lanka with the intention of stocking up on cookware, and you’ll come home with your hands full. There’s the mirisgala, a grinding slab that’s a mix between a mortar and pestle and a rolling-pin-cutting-board combo, and the kulla, a woven basket traditionally used to separate rice from their husks. We’ve already recommended the molcajete, and you’re probably buying your rice dehusked these days, but the Sri Lankan nambiliya deserves its own mention. A terracotta bowl with indents running along the inside, it’s a perfect tool for washing rice when it comes time to slough off the starch and other unwanted bits before putting it in a pot.

Food + DrinkThe Most Underappreciated Food Regions in the World, According To Chefs
Tagged
Food + Drink
What did you think of this story?
Meh
Good
Awesome