You think you know New York pizza. You’ve seen it in movies, waited in lines for the trendiest pies, heard all of the cliches, and eaten too many dollar slices to count. But few people really know the city’s full connection — both past and present — with pizza. Brooklyn native Nino Coniglio wants to change that.

Coniglio is like a relic from New York’s past, despite being in his 30s. An old-school Italian guy with a religious respect for the pizza trade, he’s more than just a pizza expert. He’s a staunch advocate for the authentic New York Italian experience. To Coniglio, pizza-making is a passion, not a business.

“No one does it with love anymore,” he tells me. “No one takes their time. Pizza is art.”

Unless you’re in the pizza business yourself and know how to spot an authentic Italian pizzeria a mile away like Coniglio does, it’s easy to get lost in the sauce. There are thousands of New York pizzerias, and visitors and locals alike are always intent on finding the New York slice. Coniglio has built an entire brand around equipping pizza-lovers with the information they need to tackle the NYC pizza scene. Of course, no one will ever agree on the best pizza style. Coniglio, naturally, believes his Brooklyn-style pizza is the best. But he’s also all about promoting pizzaiolos (Italian for “pizzamakers”) he respects along with authentic Italian eateries all around the city, from bakeries to delicatessens.

Coniglio is an integral part of the fabric of NYC’s pizza culture. He’s the owner of five restaurants: two Williamsburg Pizzas (one in Manhattan and one in Brooklyn), 310 Bowery Bar, Brooklyn Pizza Crew, and The Woodstock NYC. He’s won the Caputo Cup and Best Traditional Pizza at the Las Vegas Pizza Expo. He’s been on Chopped and traveled the world as an acrobatic pizza-dough slinger (bet you didn’t know that was a sport). But he’s still at heart just an Italian boy from Brooklyn who loves pizza.

I met with Coniglio on a winter afternoon at his favorite Italian bakery, Fortunato Brothers Cafe, in the Brooklyn neighborhood of Williamsburg. Coniglio claims it’s the best Italian pastry shop in the city, and he takes me to the kitchen where, in his classic Brooklyn inflection that sounds straight out of an ‘80s mob movie, he tells me about the intricacies of the pizza industry and the pizza-making process. It’s the small things that matter that most people don’t recognize, like the proper crumb structure of the crust, the importance of making dough from scratch, and what separates “good grease” from “bad grease.”

At times, it feels like Coniglio likes getting the word out about real pizza almost as much as he likes eating it. That’s what led him to create a first-of-its-kind confederation of pizzaiolos called the Brooklyn Pizza Crew (not to be confused with his Crown Heights restaurant of the same name). The Crew is made up of pizza-makers from NYC, Chicago, Detroit, and beyond, and Coniglio is essentially the Godfather of the group.

The Brooklyn Pizza Crew’s goal is to spread the love for quality pizza. Think of it like the Avengers, but instead of Thanos, they’re fighting Dominoes. Get familiar with the Brooklyn Pizza Crew, and you’ll learn everything you ever wanted to know, from proper pizza dough consistency to Italian pastries you can’t pronounce.

The Crew’s web presence is essentially a social media one-stop shop for pizza connoisseurs and those who want to be pizza connoisseurs. Its Instagram page shares a host of drool-worthy pizza photos and short videos made by Coniglio. Its YouTube channel features lengthier videos where Coniglio conducts documentary-style culinary tours — not just of pizza joints but of other Italian eateries, as well.

“Chefs have all kinds of groups that meet and trade culinary ideas and secrets, but there’s nothing like that for pizzaiolos,” he says. “I wanted to create that community.”

On an hours-long tour of Williamsburg, which has historically had a tight-knit Italian community, Coniglio runs through what makes the area so important to what he does. He has an encyclopedic knowledge of the neighborhood’s history and evolution, and as we walk he details the stories behind bars, cafes, and even the auto garages that we pass by. Eventually, we cross over to Manhattan to a pizza place in the Lower East Side called Scarr’s, which Coniglio considers one of the best in New York, and then to Regina’s Grocery, a small family-owned delicatessen. 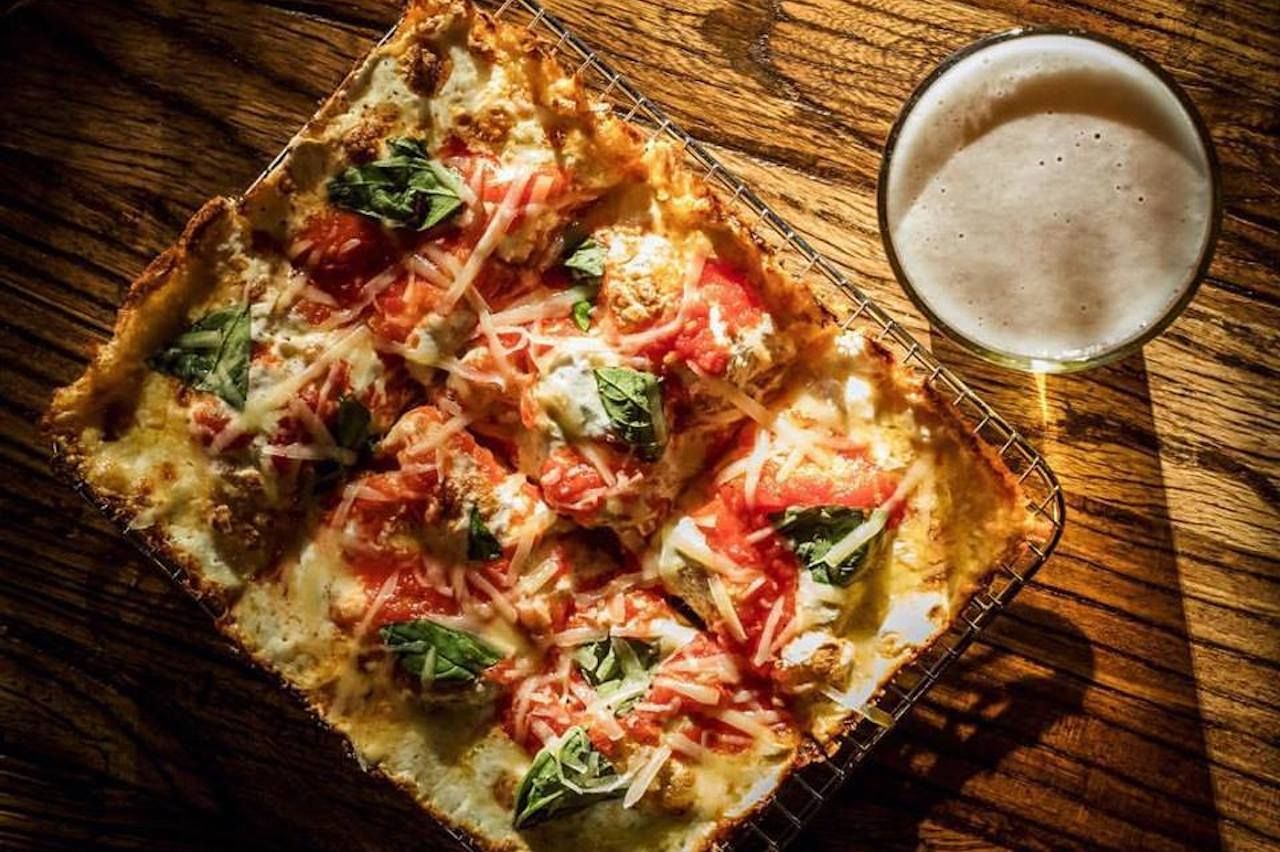 At Williamsburg Pizza, Coniglio sets a variety of slices before me from classic cheese to the truffle-adorned “grandma-style” — a square pie cooked in a pan coated with olive oil. The ingredients are fresh, the crust crumbles perfectly, and I wonder how much I would have to tip a pizza boy to deliver from New York City to my home in Boston. As he ate, Coniglio paces the small restaurant, declaring his preference for “New York pizza” over “tavern pizza,” explaining the history behind the square-shaped, grandma-style pizza and saying which NYC pizza makers he believes to be fugazzis (frauds).

His booming voice commands the room, and several unwitting diners find themselves part of his audience. They didn’t even know he owned the place. They just thought he was a guy who really liked and knew a lot about pizza. And when it comes down to it, that’s exactly who Coniglio is.