The Roman Empire isn’t immediately associated with Britain, yet the Romans conquered much of the island in the middle of the first century and remained until the beginning of the fifth century. During that time, they built a temple and public bath house dedicated to the goddess Sulis Minerva on the site of a natural spring in what is modern day Bath, England.

The Romans built the temple and baths early in their occupation, between 43-76 CE. The site quickly became a bustling city named Aquae Sulis, and an important religious pilgrimage destination. Before the Roman conquest, the Celts honored Sul, the Celtic goddess of medicine and healing who they believed was the creator of the spring. But in a melding of cultures between the local Celtic tribes and the Romans, it was Sulis Minerva, a combination of Sul and the Roman goddess Minerva, whom visitors worshiped at the temple and honored by bathing in the waters believed to have healing properties.

The legacy of the Romans’ ingenious designs to harness water and unique cultural practices endured long after their retreat, and today those thermal waters still flow through the ruins of the Roman Baths, which are one of Britain’s top tourist attractions. Not only can you visit the ruins of the baths, but you can even take a swim in the sacred water at Thermae Bath Spa, just like the Romans did so many centuries ago.

The natural history of the springs

Bath has three springs that were formed around 10,000 years ago when rainwater sank about a mile below the earth’s surface. The network of three springs — the Cross Spring, the Hetling Spring, and the King’s Spring — contain 42 different minerals and maintain a temperature of about 114 degrees Fahrenheit. King’s Spring, which supplies the Roman Baths with 240,000 gallons of water rising to the surface is a magnificent feat of nature, or a gift from the gods if you were Celt or Roman. Without the scientific knowledge we have today, it is not hard to imagine how the people of Britain believed the springs to be a mystical phenomenon. 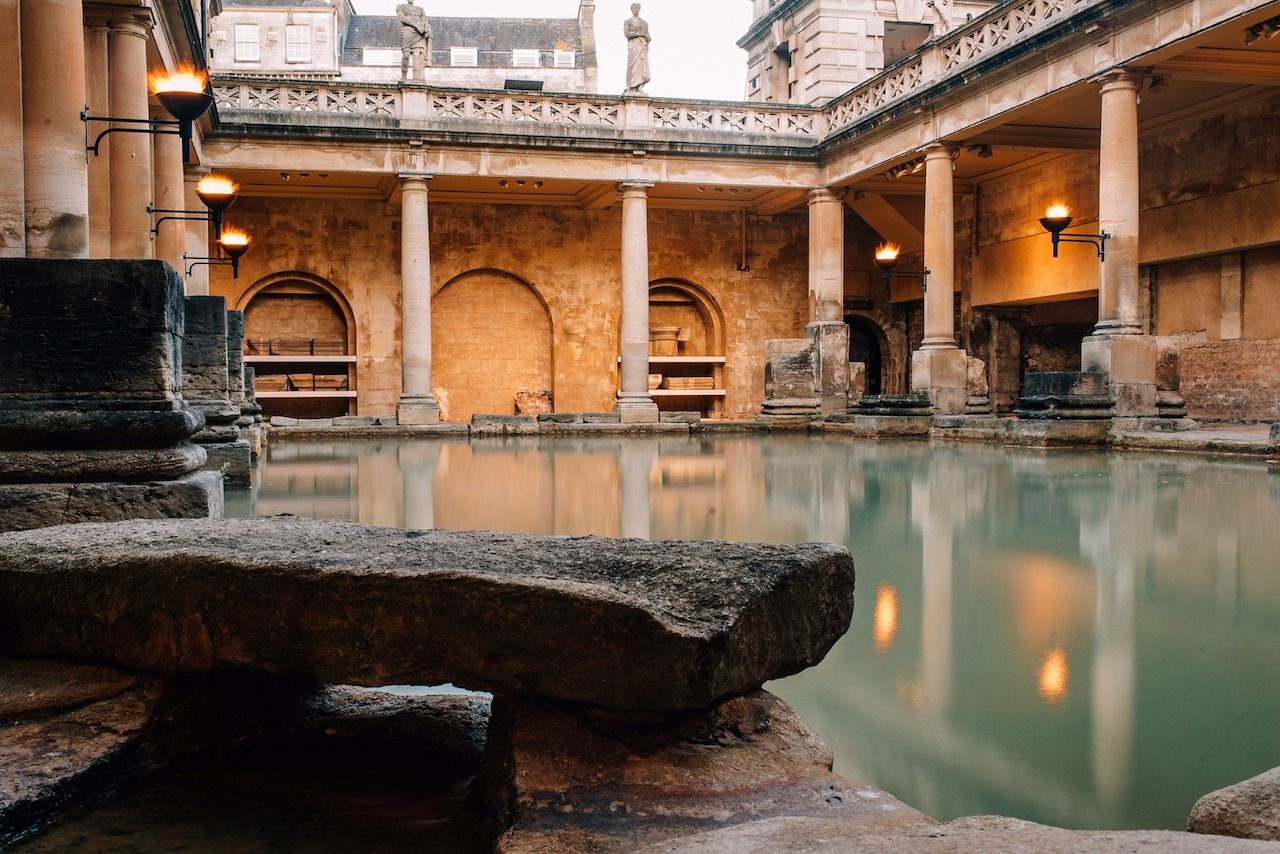 The Roman Baths museum is located in the center of the UNESCO World Heritage city of Bath, adjacent to the Pump Room on the same square as Bath Abbey. The Pump Room was built in the 18th century as a place for Bath society to congregate and drink the spring water, but is now a popular choice for afternoon tea. Ticket prices for the museum depend on the month and day of the week. Peak season adult tickets will cost you approximately $26, but prices are significantly cheaper off-season at about $18. Student discounts are also available. You can save money by visiting on a weekday and buying your ticket online. Audio guides are included in the ticket price. 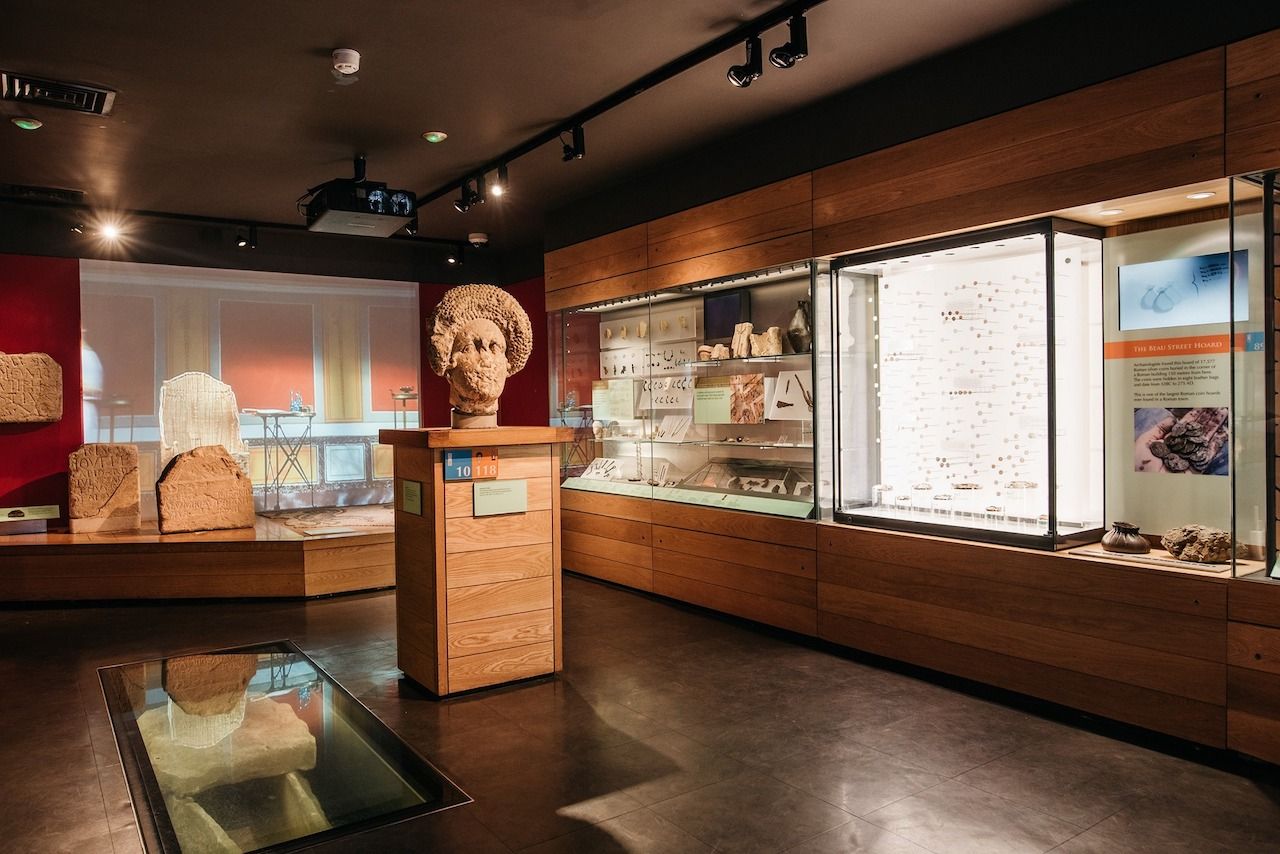 Upon entering the museum, you immediately walk out onto the terrace overlooking the Roman Baths before making your way through the indoor exhibits. The carefully curated museum contains thousands of artifacts, including coins, tombstones, and curse tablets. Typically etched on sheets of lead, citizens of Aqua Sulis would write curses against those who wronged them and throw them into the spring where they believed the spirit of the goddess resided.

Next, you walk through the courtyard of the ancient temple where the Romans worshiped and made sacrifices. On display is the gilt bronze head of the goddess Sulis Minerva, most likely belonging to the statue that stood inside her temple looking out onto the sacrifice site. The bridge here will lead you to the final segment of the museum, which showcases and explains the extraordinary engineering skills the Romans demonstrated in building the baths and their drainage system. 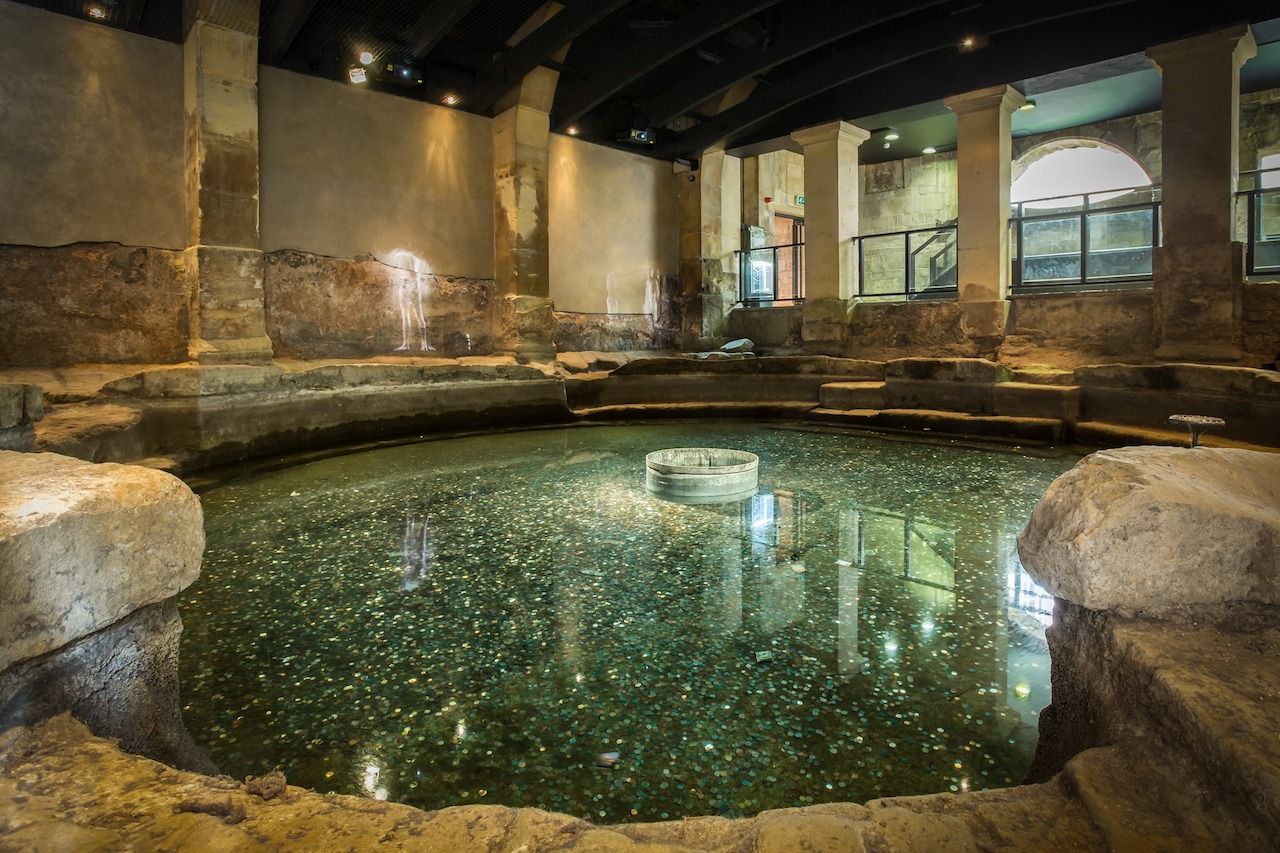 Finally, you make it to the main event — the Great Bath. The pool of dark green water is surrounded by columns and if you’re visiting in the colder months you’ll see steam rising from the thermal waters. Although now open to the elements, the Great Bath used to be covered by a roof during the Roman times. There are several cave-like rooms making up the bathing suites of the East and West Baths to explore from here, and the museum makes it easy to imagine what life was like in the heyday of the Roman Empire with CGI projections.

The eastern functioned as changing rooms and saunas for women. Much like modern-day spas, there were also massages and other treatments at the baths. The western baths offered heated rooms for the men and a circular, ice-cold plunge pool. Originally, men and women were allowed to bathe together, but Emperor Hadrian banned this practice during his rule from 117 to 138 CE.

As you finish your stroll through the western baths, you have the opportunity to drink the mineral water from a fountain. Public guided tours of the bath complex are offered for free at the top of every hour starting at 10:00 AM.

People were permitted to swim in the water of the Roman Baths until 1978, but it is now considered unsafe to bathe in. Not only are there high levels of bacteria, but the Romans also used lead to line the five-foot pool. Prior to the closure, the UK’s National Health Service provided treatment for rheumatism and arthritis in the water. 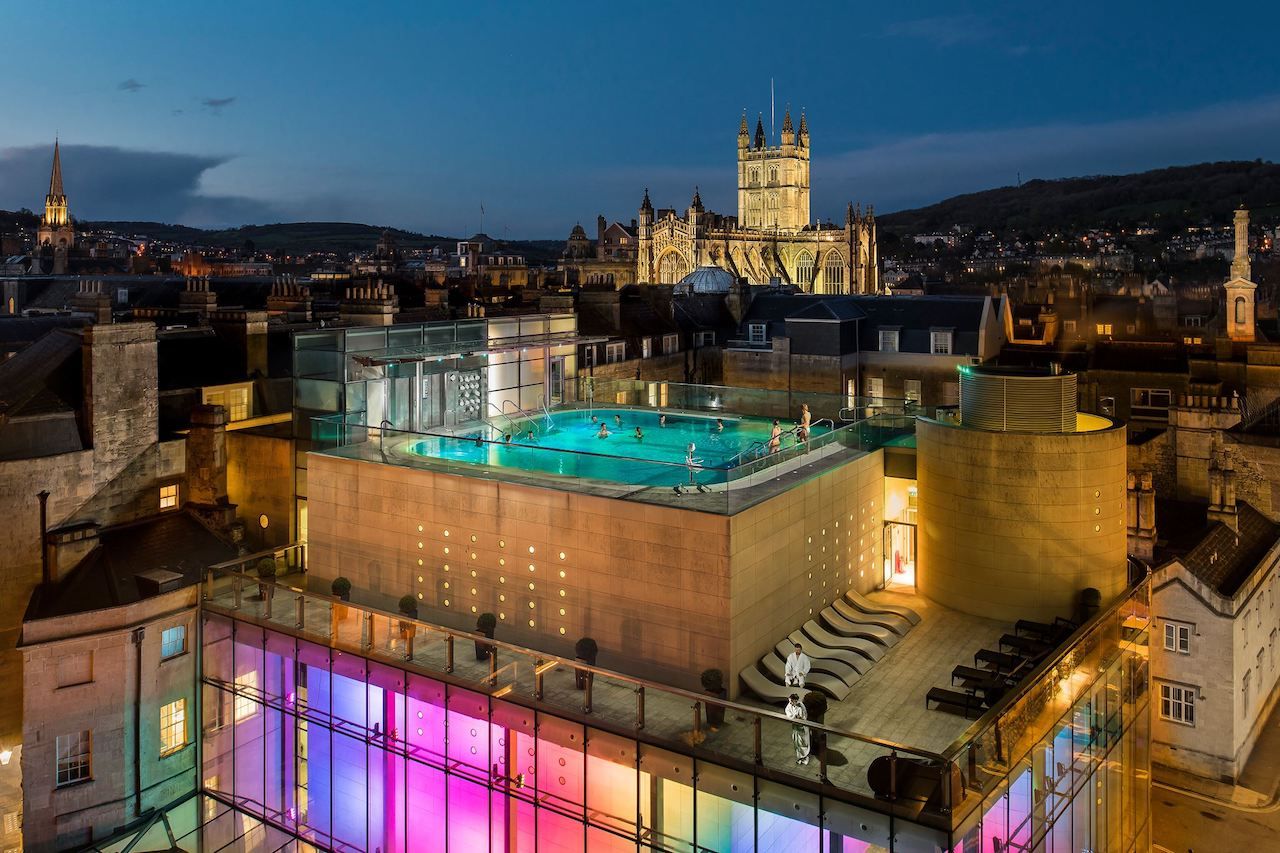 After walking through the magical ruins of the Roman Baths you will undoubtedly want to bathe in the thermal waters yourself. You can do this at Thermae Bath Spa, a bath house just a few blocks away from where the Romans once gathered and indulged in the healing mineral water. 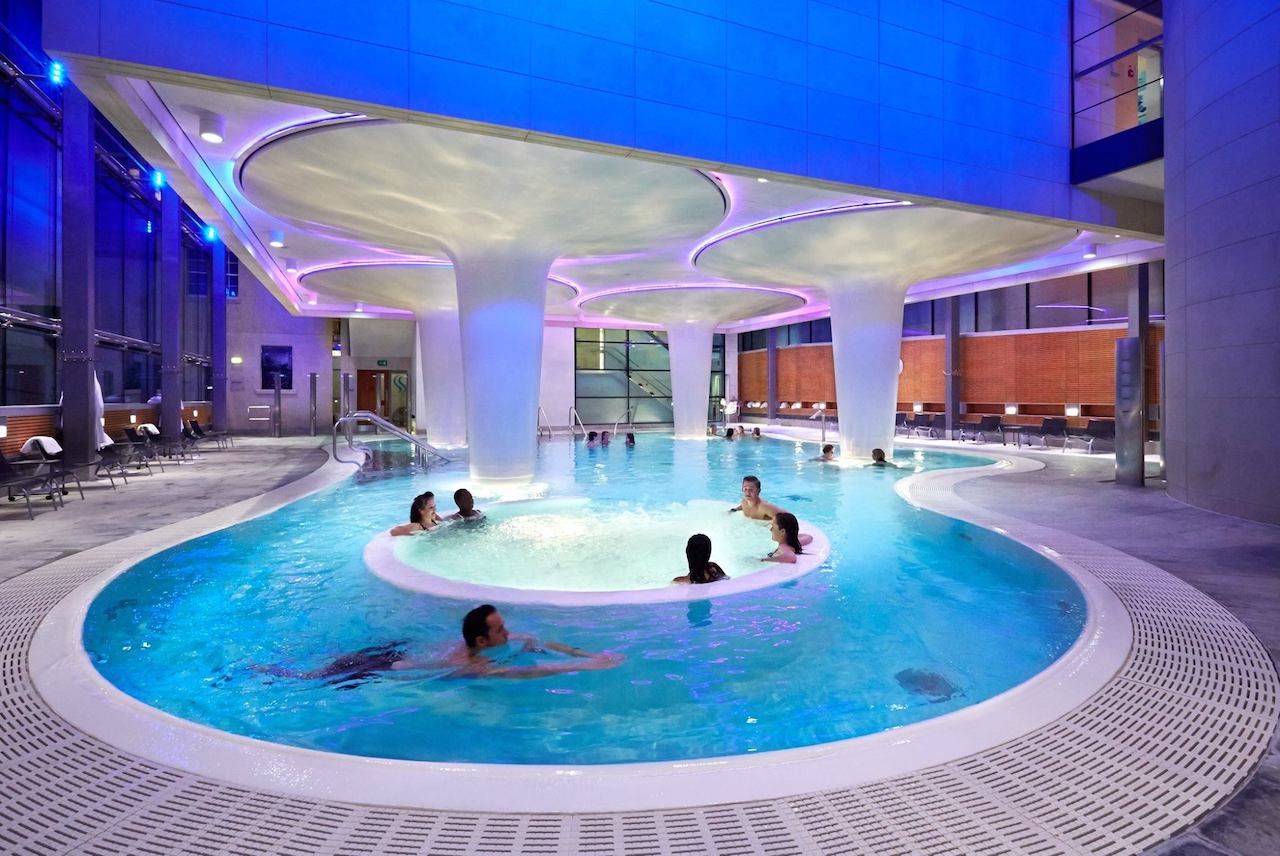 The most popular spa option for tourists is the “Thermae Welcome,” which includes a two-hour spa session plus access to a towel, robe, and flip-flops. Weekday tickets will cost you approximately $44.50 and weekends $49.50. However, when you buy weekday admission to the Roman Baths you get a three-hour session for the price of two if you show your ticket. There are additional spa treatments and packages available as well. You must be at least 16 years old to enjoy the baths.

Thermae does not allow you to book tickets in advance; they ask that you just show up and wait in line. There are unisex locker rooms with private dressing rooms for you to change into your swimsuit. You will receive a wristband upon purchasing your ticket that will act as your locker key. 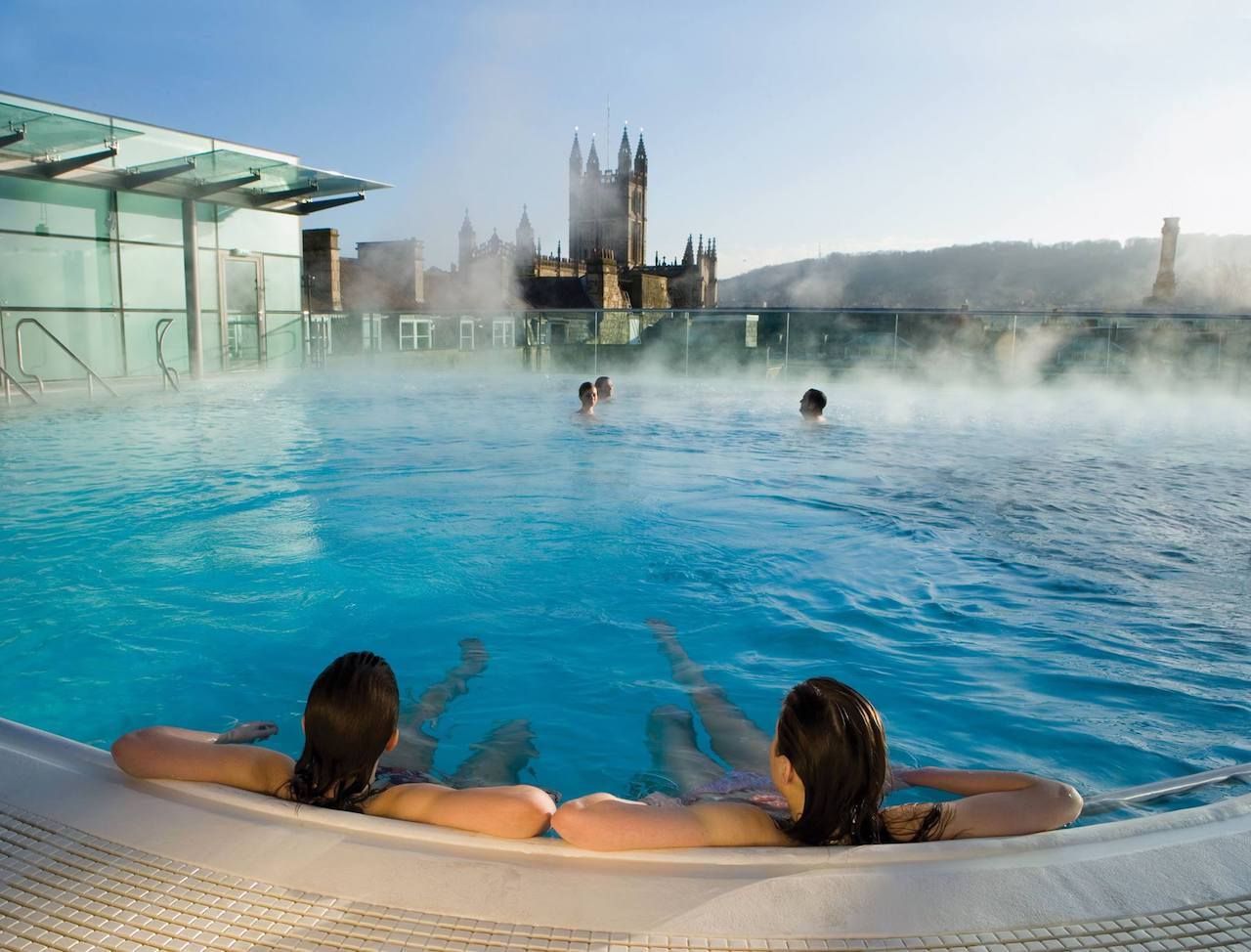 We suggest planning your trip so that you can watch the sunset over Bath in the rooftop pool. The modern-day spa functions much like ancient Roman baths — a place to both socialize and relax.