Museums are great and all, but if you’re not the kind of traveler who likes to spend hours shuffling around indoors to see art, alternative options are most welcome. Checking out the architecture of a destination is a freeing way to get a healthy dose of man-made beauty, as well as a history lesson, and is usually very easy on the wallet. Ceilings, in particular, often do more than protect a place from the elements and can be a beautiful medium for art, especially when made of glass. You may strain your neck while checking out these amazing glass ceilings from around the world, but the gorgeous creations resting above your heads will be very much worth it. 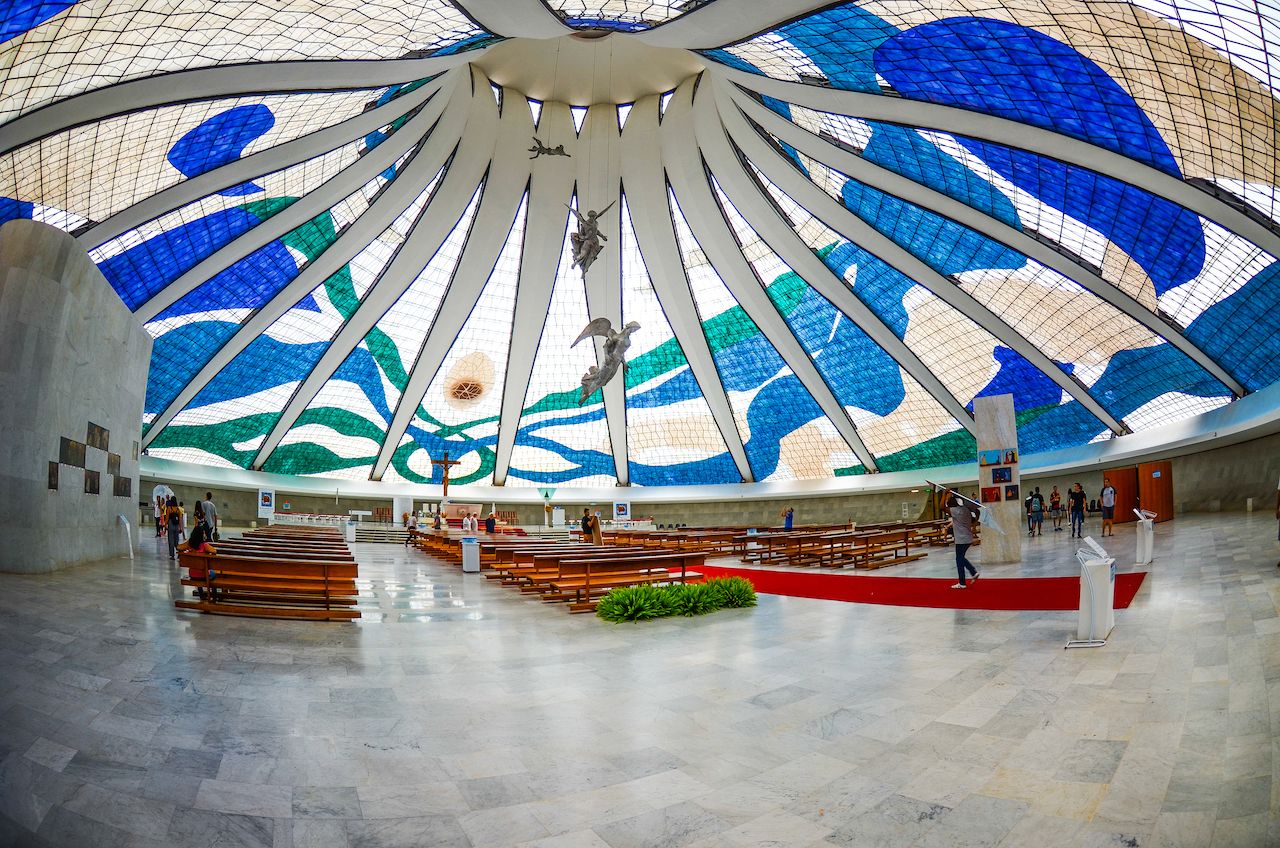 The Cathedral of Brasília in Brazil is home to a unique ceiling, especially in a church. Sixteen curved concrete columns interspaced with stained glass form a circle of light and make for a stunning visual display around the churchgoers, who surely feel transported every time they visit this wonderful structure. 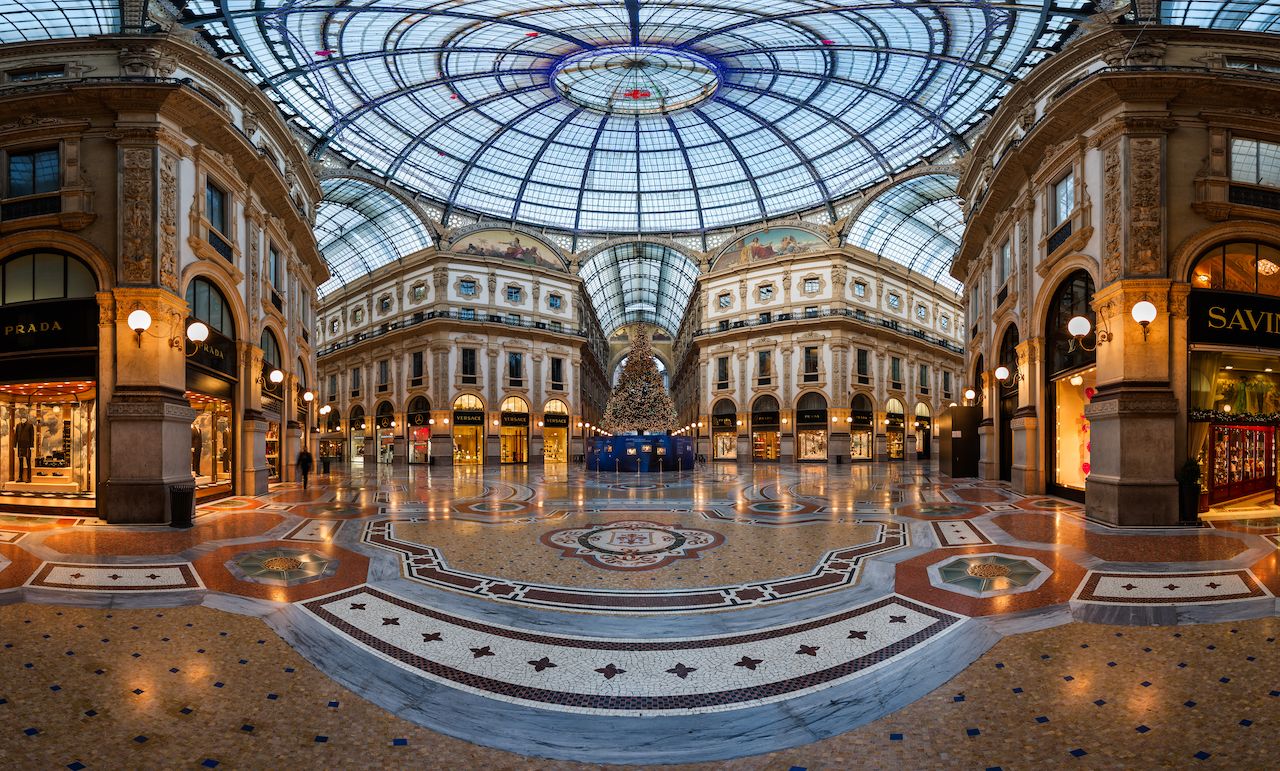 A landmark of Milan — and still an active shopping mall — the Galleria Vittorio Emanuele II treats shoppers not only to luxury stores but also a massive glass ceiling topping the entire arcade-style structure. In the center, a glass dome stands tall as an easily recognizable feature of the classic design, which dates back to the mid-1800s. 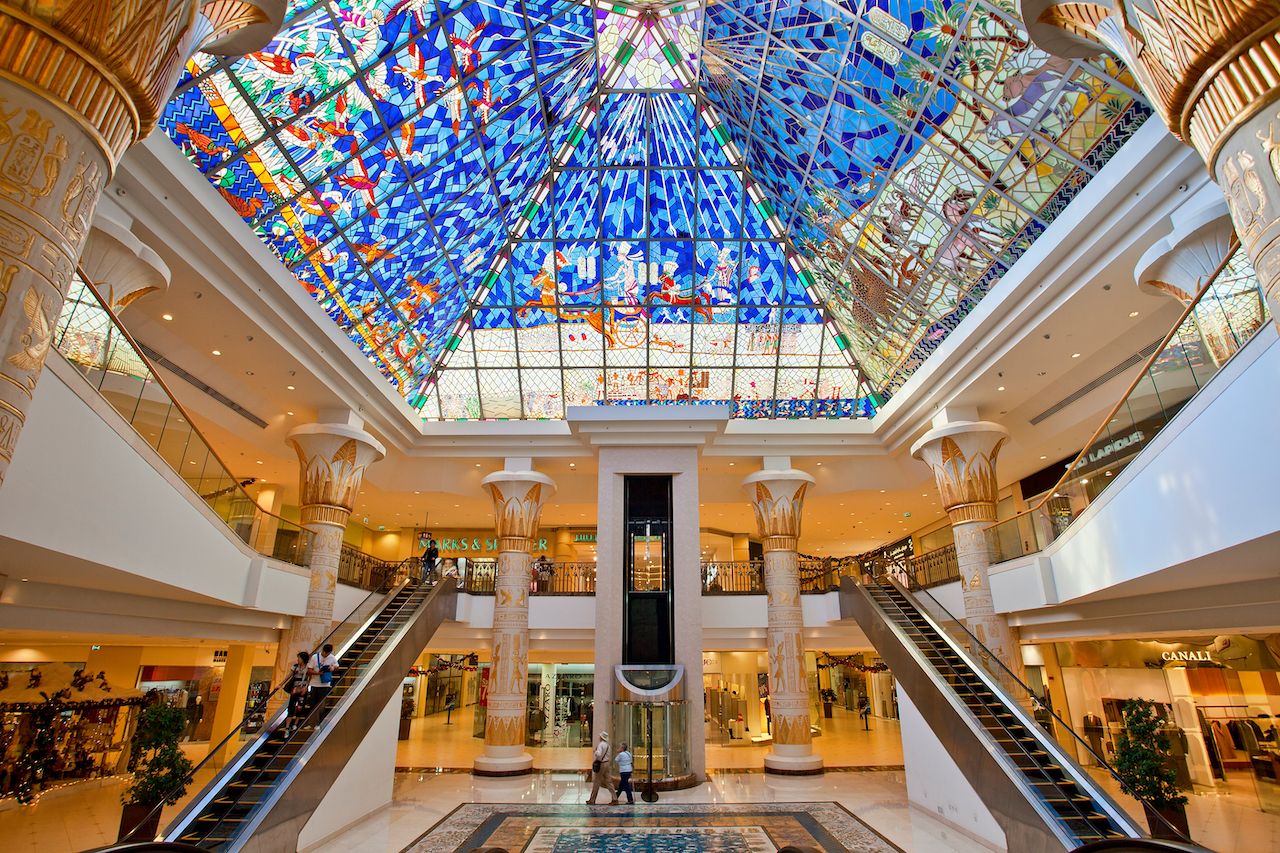 Like most things in Dubai, Wafi Mall is over the top. Much more than a mere shopping mall, it’s a spot for fine dining, a health club and spa, glow-in-the-dark mini golf, and even a traditional Arab souk. Towering above it all is an elaborate, multi-colored, pyramid-shaped stained glass ceiling depicting peaceful nature scenes. Another stained-glass pyramid roof elsewhere in the mall shows ancient Egyptian symbols, while a third stained-glass art piece in the mall is a large dome designed with soothing, cool colors that would surely help stressed-out shoppers relax. 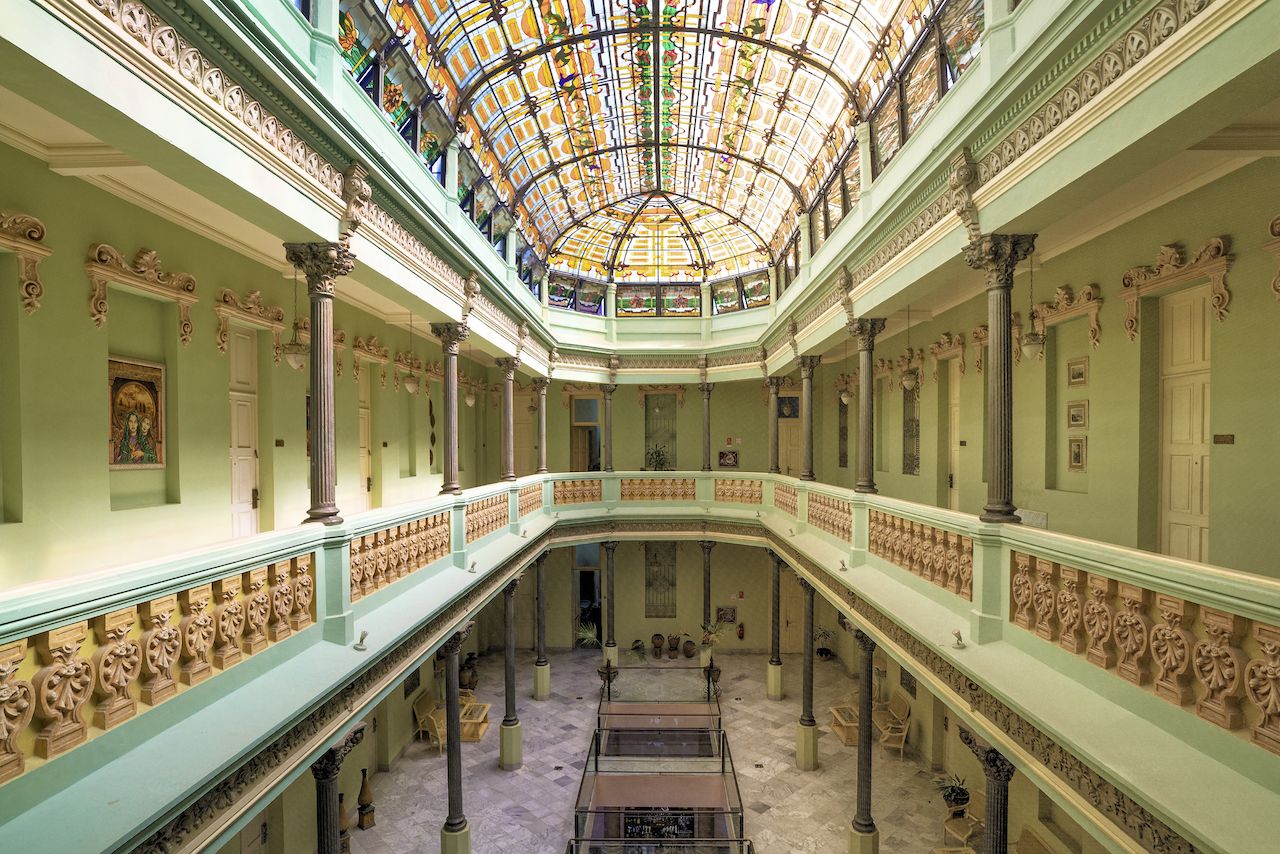 Havana’s Hotel Raquel dates to 1905. Its 25 rooms are decorated with paintings and pictures by Cuban artists, and the hotel reflects an Art Nouveau style throughout. Besides the stylish interior, however, the biggest eye-catcher in the hotel is the ornate arcade ceiling in the lobby. The colorful stained-glass piece bestows a soft glow on the rooms and halls below; it’s the skylight of all skylights. 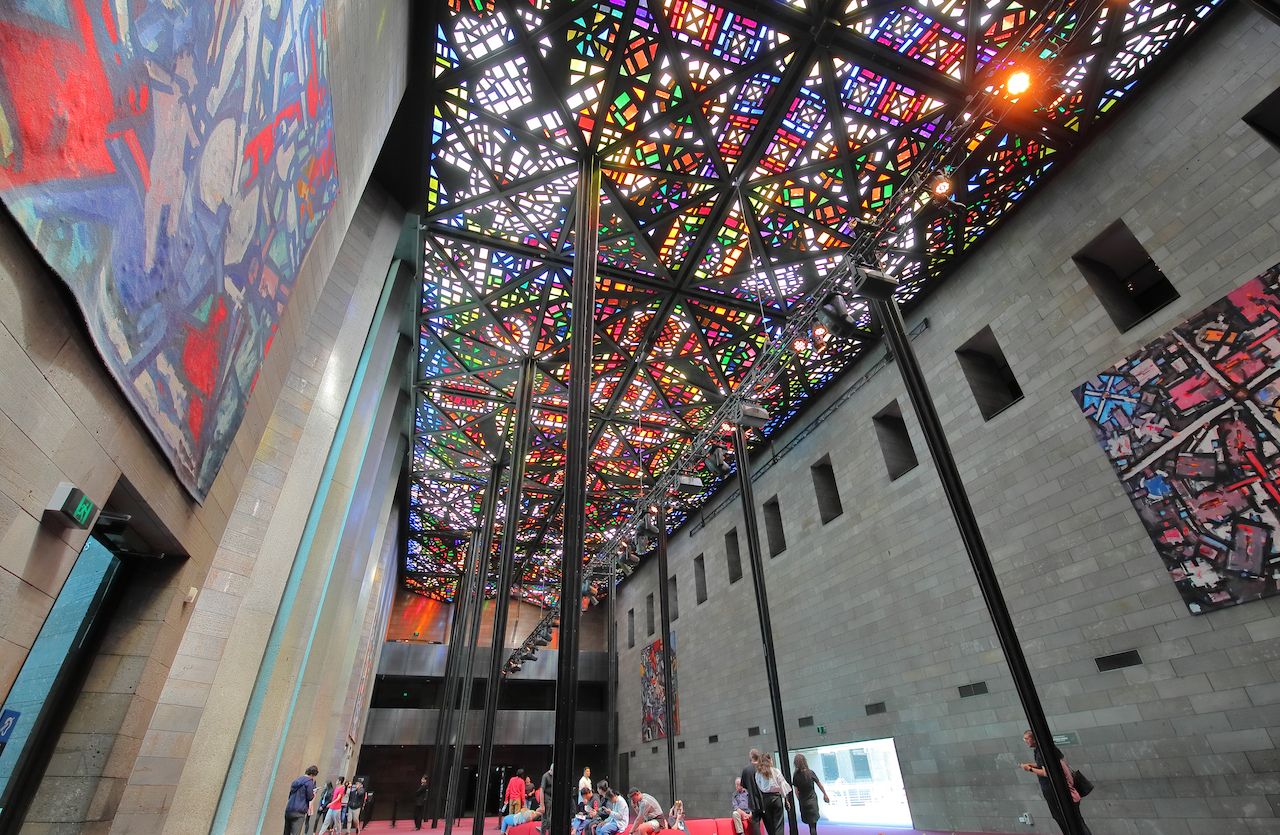 Melbourne’s National Gallery of Victoria is the oldest gallery in Australia and exists across two buildings, with more than 70,000 works in its collections. NGV celebrates a variety of art forms, from exhibitions of historic relics to fashion to architecture to dance. Its ceiling, however, is a masterpiece in its own right: It is the largest piece of suspended stained glass in the world, spanning the length of an entire hall. Its geometric shapes come together in a multitude of colors to resemble the sensation of looking through an oversized kaleidoscope. 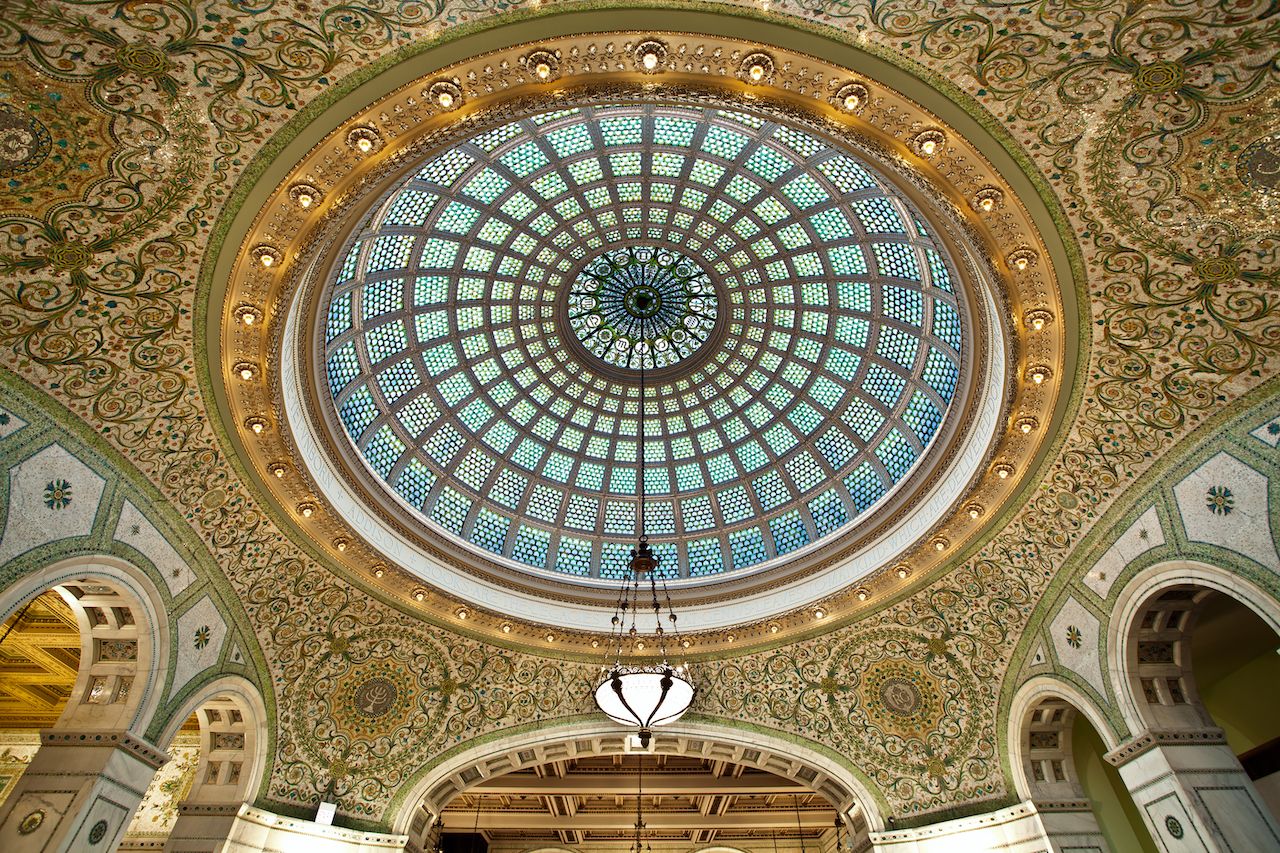 Not one but two oversized stained-glass domes top the Chicago Cultural Center, a landmark building of Chicago that was once a library but now functions as the city’s official reception center. The cultural center hosts hundreds of free, public events each year and is a popular Chicago spot, with attractions like free performing arts events, art exhibits, films, lectures, and more. 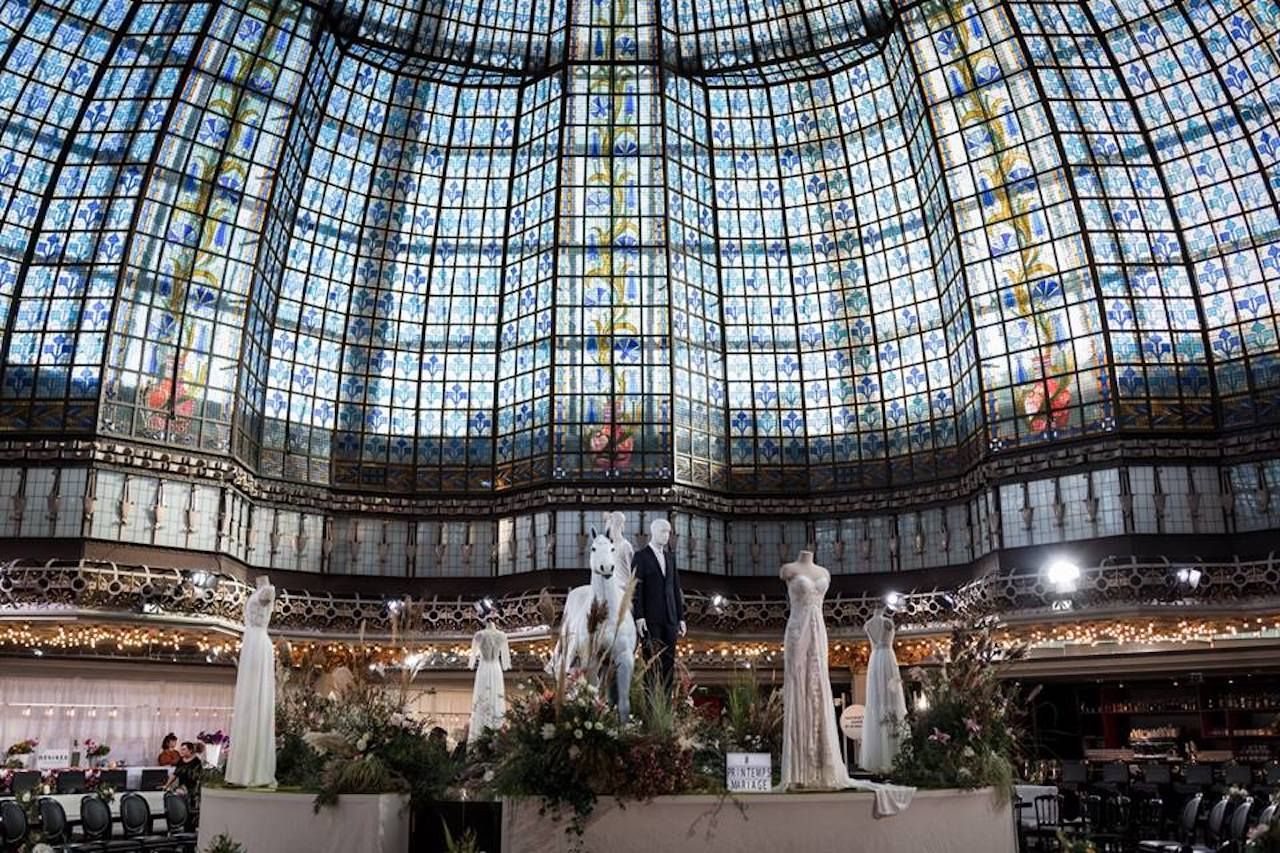 Printemps, a luxe department store, takes up three buildings and 25 floors in central Paris. However, even those with no desire to shop or spend will enjoy a visit to this landmark; the beautiful architecture on the exterior gives way to a mind-blowingly intricate glass-dome ceiling inside. For more Parisian stained-glass ceiling goodness, pay a visit to the Galeries Lafayette, an upscale chain of department stores. The flagship location is often photographed for its impressive ceiling and the multi-story Christmas tree that’s erected in the center of it each year. 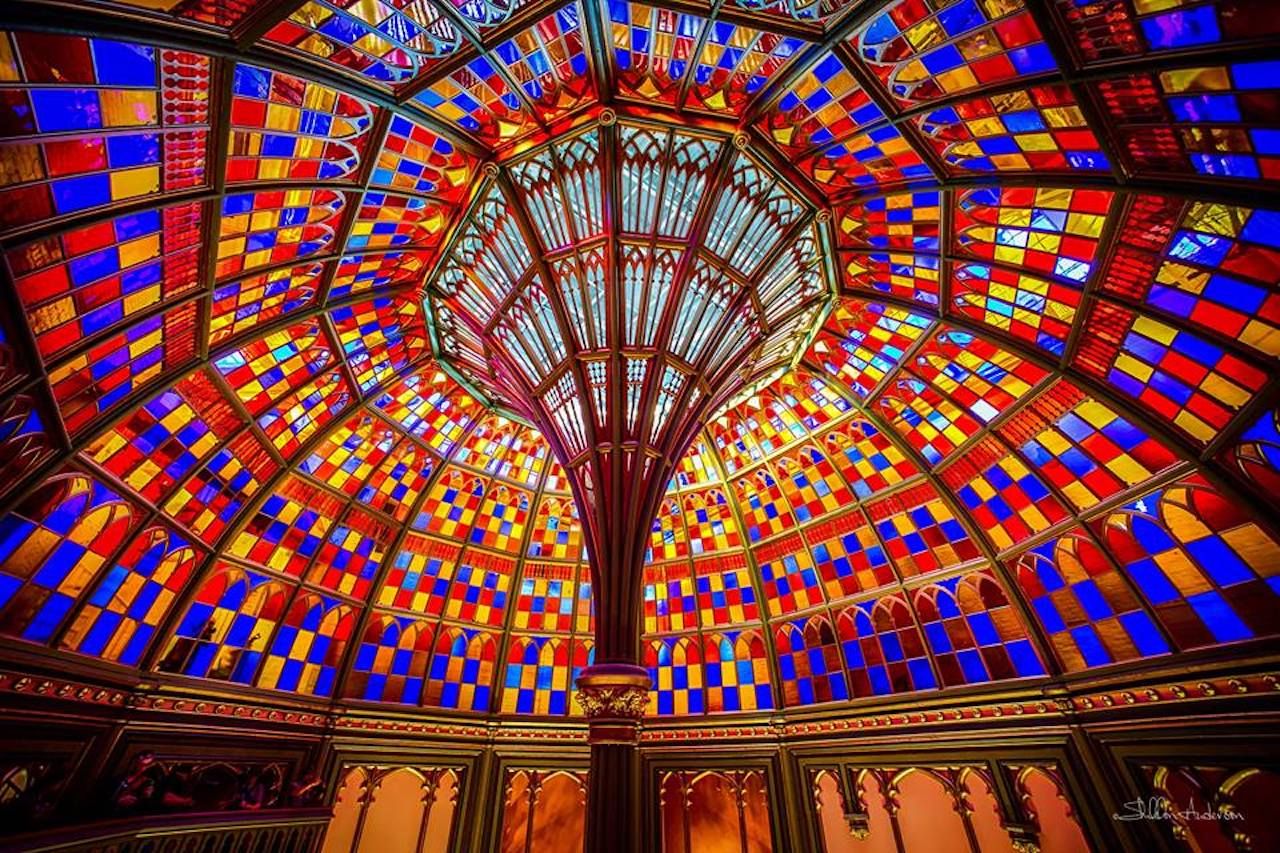 The glass-dome ceiling inside Baton Rouge’s Old Louisiana State Capitol is an explosion of colors and dates back to the 1880s. Due to its design, the Old Louisiana State Capitol is sometimes referred to as the castle of Louisiana. Mark Twain famously wrote of his distaste for the castle-like building, calling it “pathetic,” but one look at the stained glass ceiling inside and most visitors agree it’s anything but. 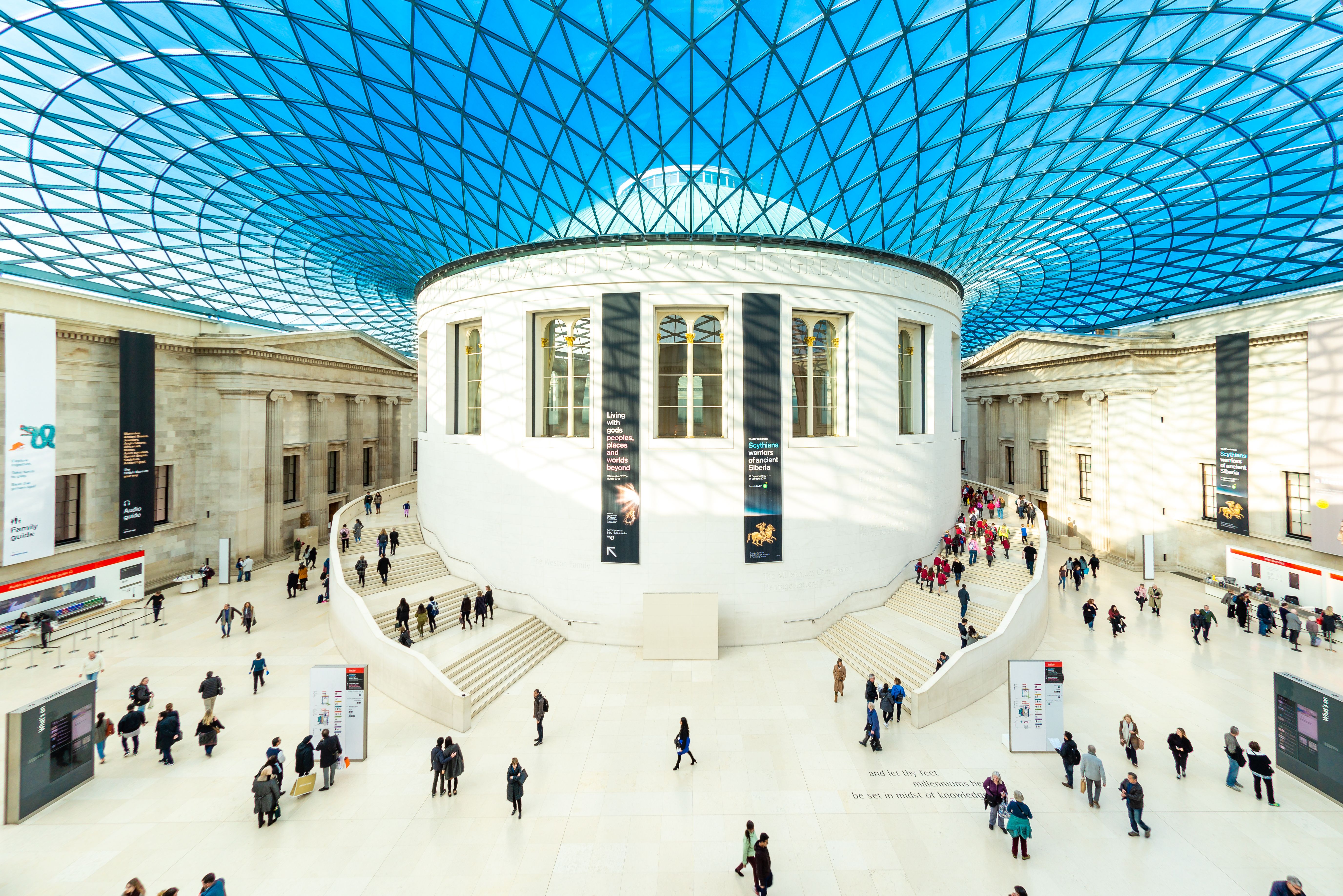 The British Museum houses priceless artifacts, such as the Rosetta Stone and the Parthenon sculptures. You can spend hours wandering through the many galleries, looking at relics that make up some of the most treasured possessions of collective humanity. But as you explore the amazing sights, don’t forget to leave a few minutes to admire the iconic domed lattice glass ceiling covering the two-acre Great Court. It’s made of 3,312 panes of glass and, at the center, the Reading Room is encircled by a wide staircase, functioning as a grand entrance to all that the museum holds. 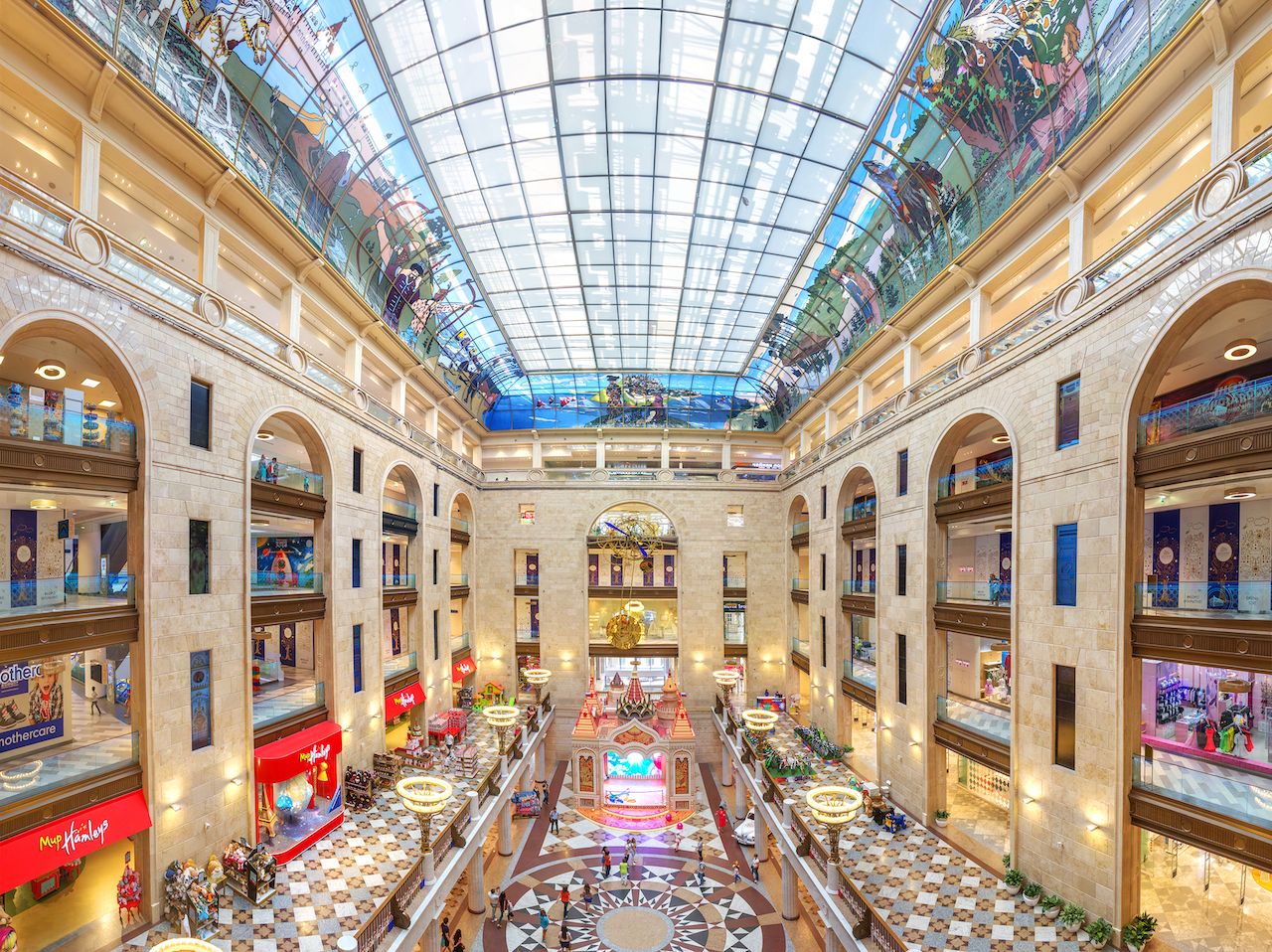 Moscow’s Children’s World, or Detsky Mir, was once the largest toy store in Europe. It underwent a major renovation, reopening its doors in 2014, and remains the largest toy store in Russia; however, it now also functions as a multi-purpose shopping center with stores of all sorts. The massive children’s store is topped with a skylight that spans an open, multi-storied central area where families can gather and enjoy a moment of peace before continuing on with the fun. 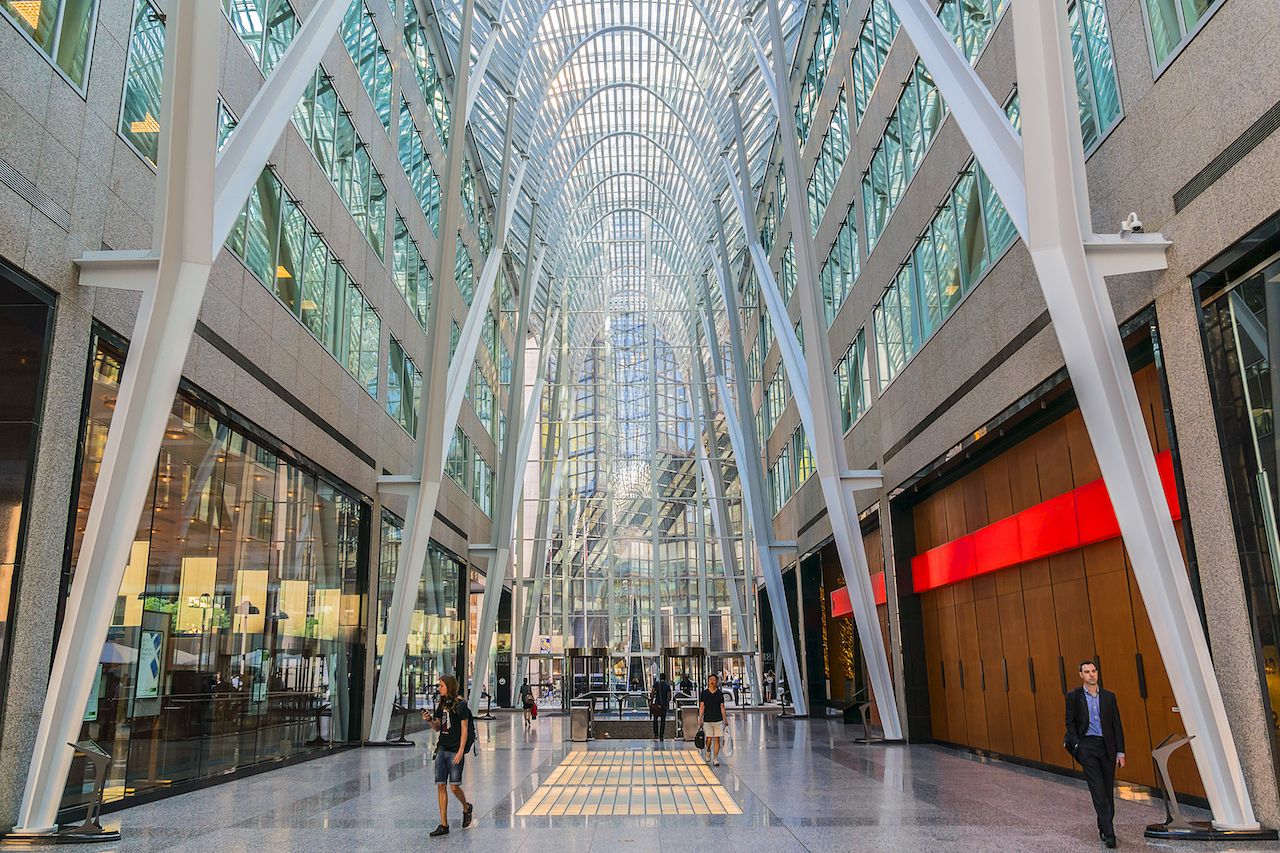 Toronto’s Brookfield Place is a large downtown complex housing 49 stories of offices, but even tourists to Toronto will want to pay a visit. Inside the Allen Lambert Galleria on the ground floor, a highlight of the building, the ceiling is an attraction in its own right. Pedestrians in the elongated thoroughfare feel as if they’ve stepped inside a post-modern, tree-lined street. The ceiling reaches six stories high and functions like a vaulted, arched skylight. During the holidays, the complex showcases a wonderful display of lights attached to the gorgeous ceiling.