Food is an important part of Chinese culture. It’s obvious just how important it is in the capital city of Beijing, where you can find an eclectic food scene that ranges from essential Beijing dishes that tell the history of the city to sweet and savory Chinese desserts. One of the best ways to start your culinary trek is by checking out the city’s street food, sold along main streets, hutong alleyways, parks, and just about anywhere else you can think of. These are eight of Beijing’s most delicious street foods and where to try them. 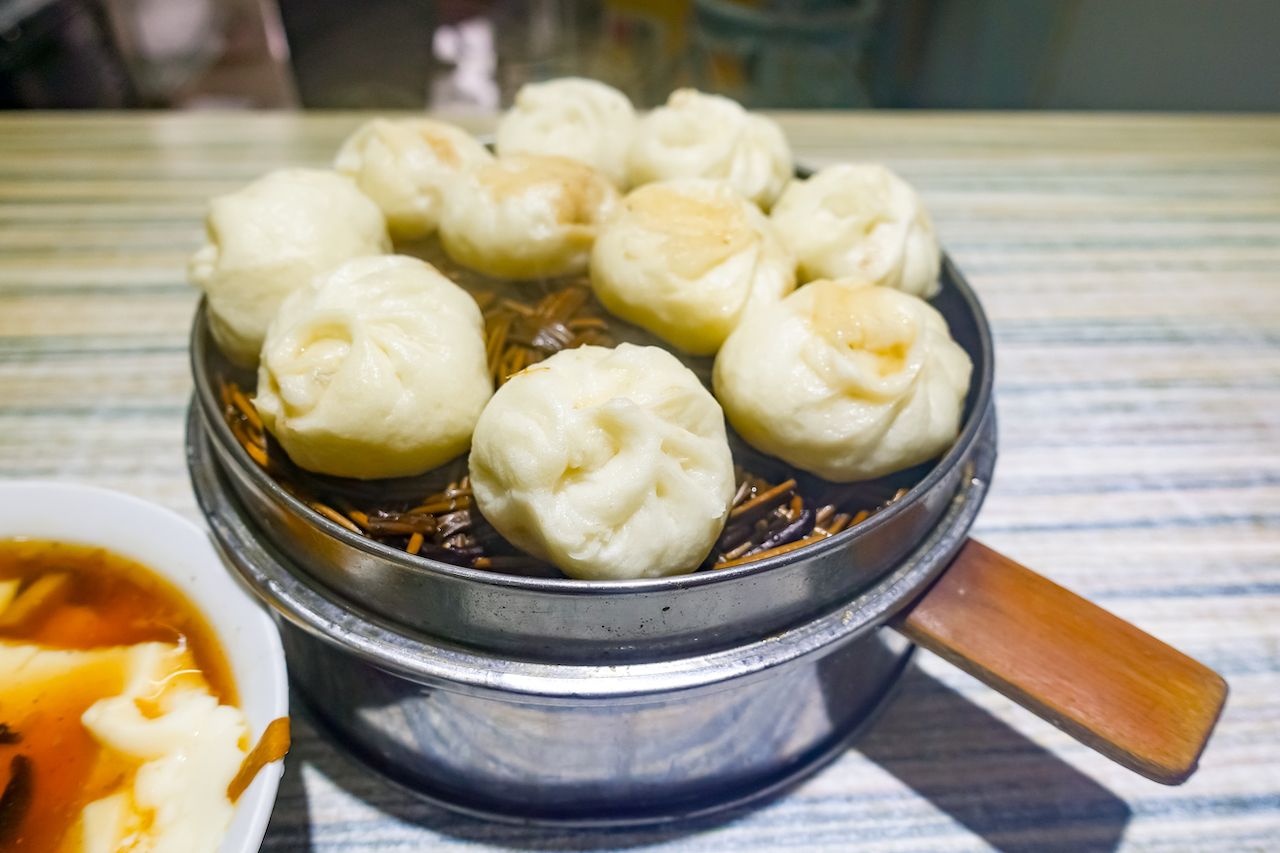 Bao are steamed buns perfect for eating on the go. This quintessential Chinese food is soft and fluffy, and there’s no end to the kinds of fillings bao might have. They can be full of pork or other meat, or filled with red bean paste for a vegetarian version, and the taste can be savory or sweet.

While many Asian cultures have their own takes on steamed buns, the bread originated in Northern China, where wheat was a major grain since at least 1,000 BCE. There are a number of legends that each give their own depiction of exactly how steamed buns came to be, but the most commonly told one dates back to the third century. The story goes that a general named Zhuge Liang needed to cross a river with his army. People on the other side of the river demanded the heads of 50 people as payment for crossing. Some legends say that Liang used balls of dough filled with meat as a substitute without issue and others say that he used them as a form of deception.

Regardless of what amount of truth the legend holds, modern bao are far from head-sized and are the perfect snack for on-the-go eating. 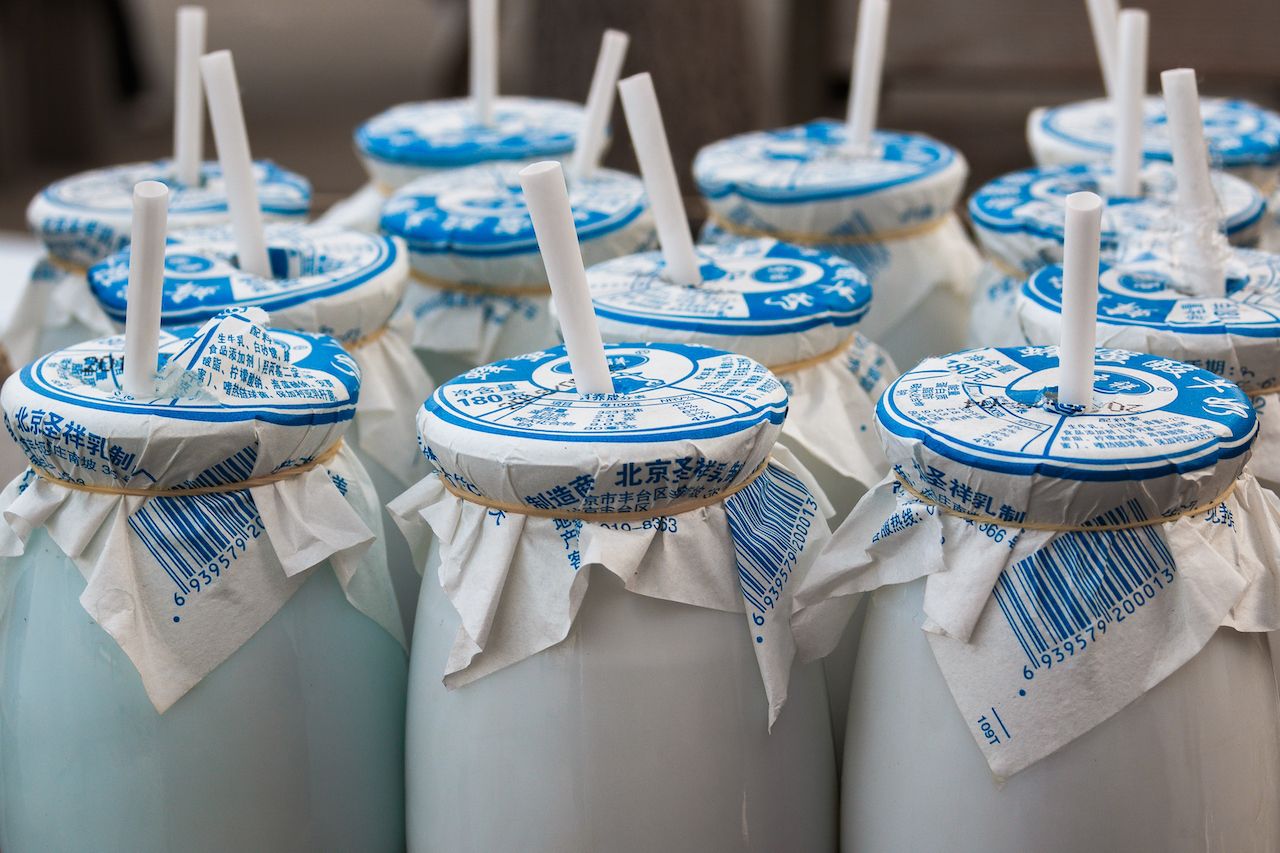 Yogurt is a common breakfast item around the world, and China is no exception. In Beijing, there’s lǎo Běijīng suānnǎi, which directly translates as “old Beijing yogurt.” The yogurt-in-a-jar is freshly made by heating up milk and adding sugar, which gives it a sweet taste, and is kept at room temperature. Kept inside white ceramic jars topped with white paper and blue writing, the yogurt is usually found lining the outside of store entrances. Simply stick a straw through the paper to enjoy.

Traditionally, the jars have to be returned to the vendor to recycle when you’re done, so you have to eat the yogurt on the spot. For an extra yuan or two, however, you can take the ceramic jar to-go, though some places have now started using disposable serving materials to eliminate the need for returns. 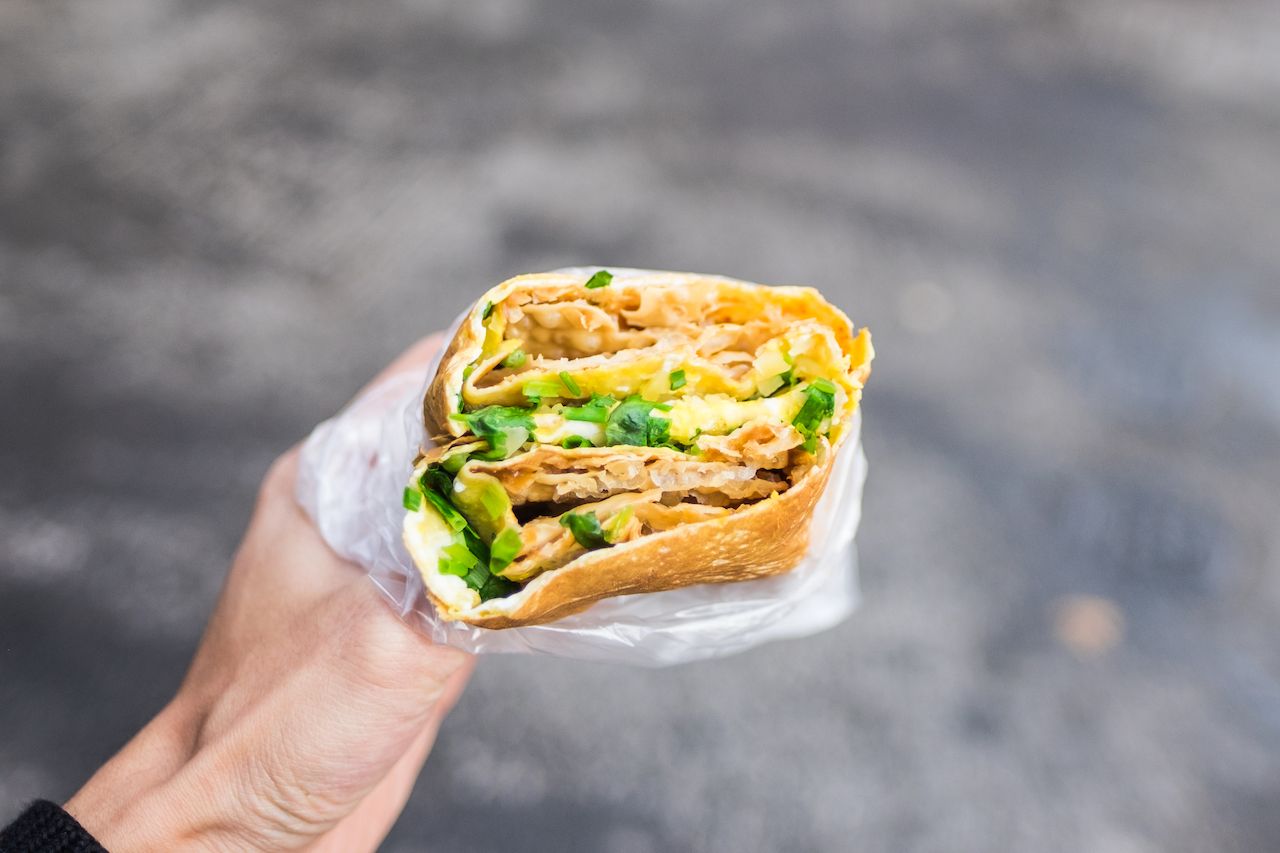 A perfect complement to lǎo Běijīng suānnǎi (as well as a filling food on its own), jiānbing is a savory fried pancake. Typically eaten for breakfast, you can find vendors cooking up jianbing from sunrise to late morning just about anywhere in the city; the telltale sign will be the large grill sizzling with an equally large pancake. The batter is made of wheat flour, and eggs and other fillings are usually added on top while it’s being cooked. The pancake is then turned over and over, making it similar to a sandwich. Common fillings include scallions, cilantro, sesame seeds, ham, and baocui, a type of fried cracker. Jiānbing is popular, so expect to wait in line for a few minutes at the very least. 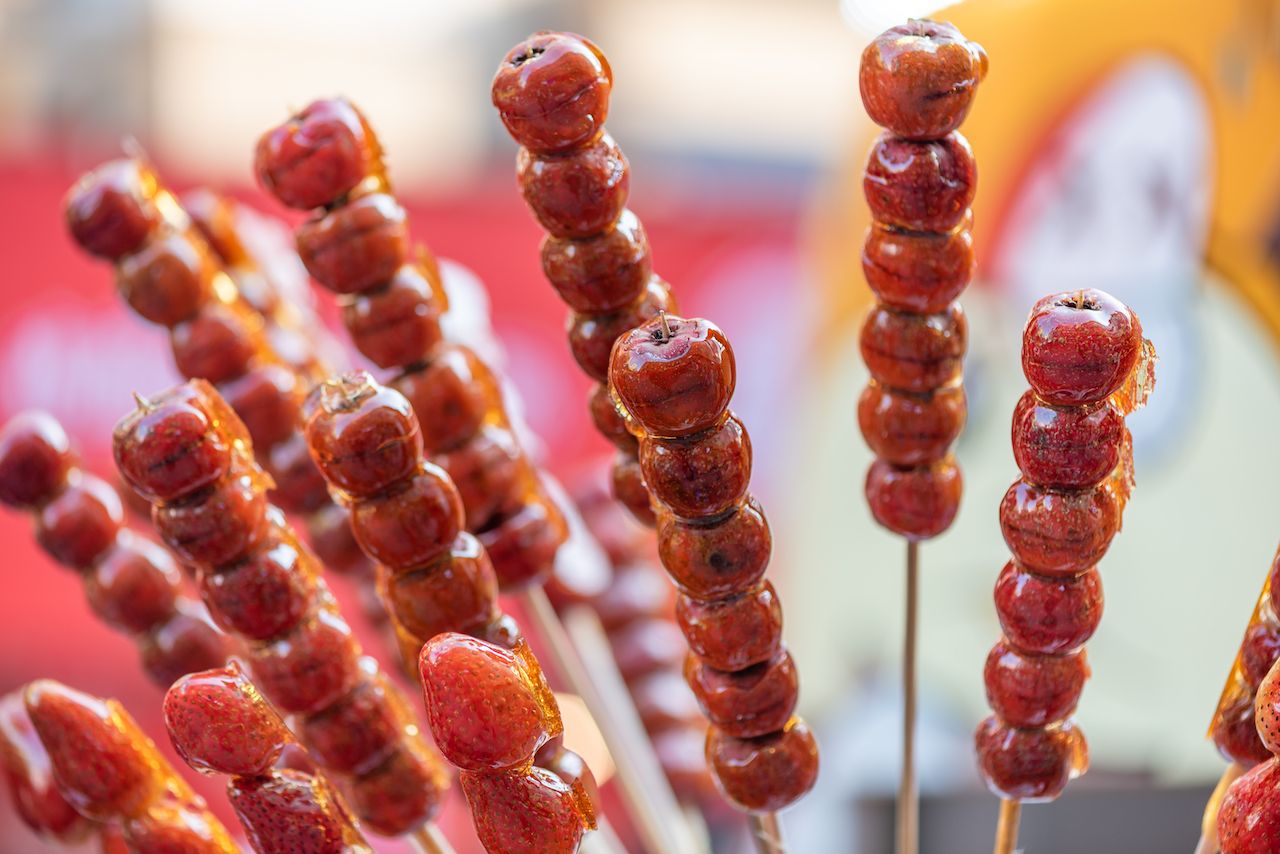 Beijing’s answer to candy apples is tánghúlu, which is candied Chinese hawthorn. The red fruit itself has the appearance of an apple but has both a sweet and sour taste. You’ll find this treat on a stick with a stack of hawthorns coated in a thick layer of sugar (and sometimes caramel, depending on the vendor), which only adds to its sweetness. Because of the popularity of candied hawthorns, vendors also sell other versions with fruits like strawberries or kiwis. 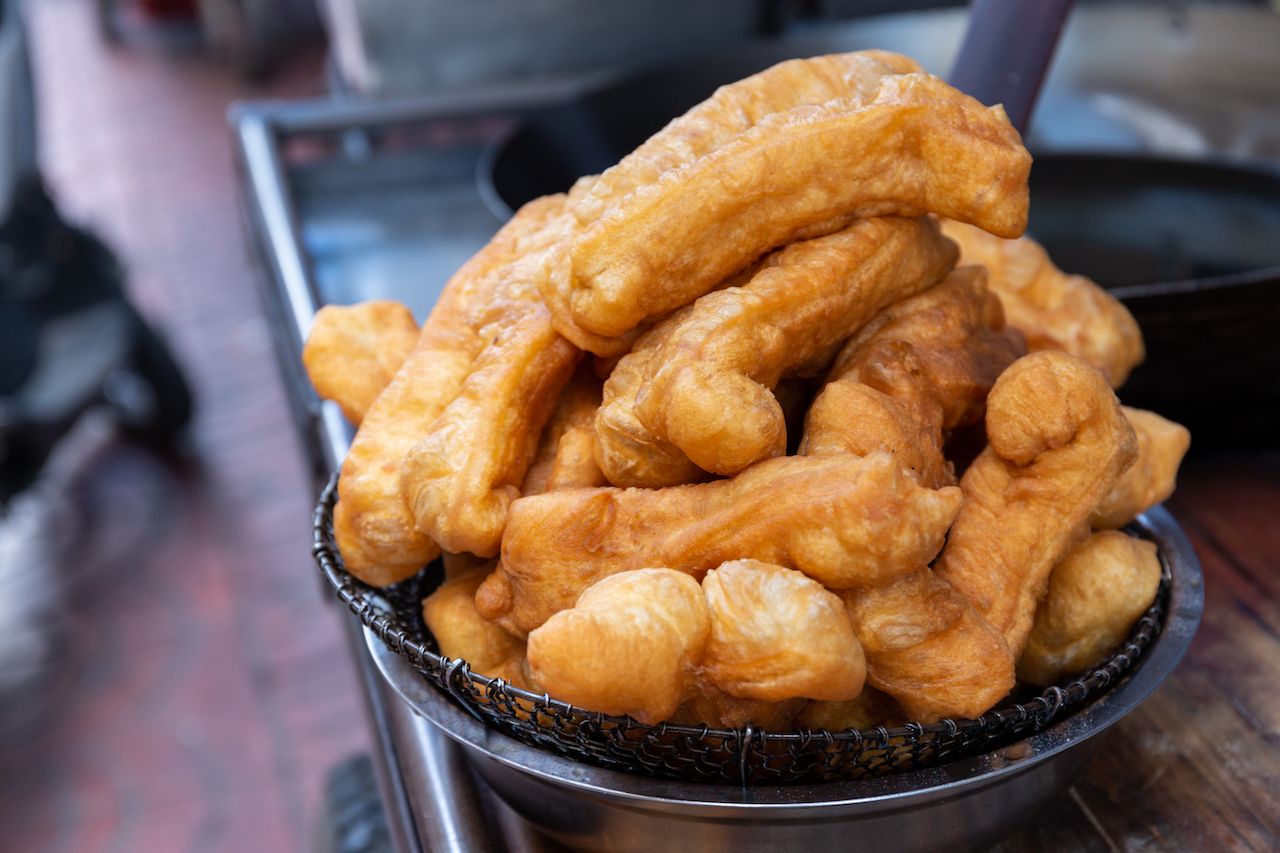 Somewhere between churros and doughnuts, yóutiáos are fried sticks of dough. They’re usually eaten for breakfast, though you can find them throughout the day, and Beijing locals often have a cup of soy milk as an accompaniment. Like most deep-fried doughy foods, yóutiáo is crunchy on the outside and soft on the inside, and since most vendors use salt while making it, it tastes sweet and salty. 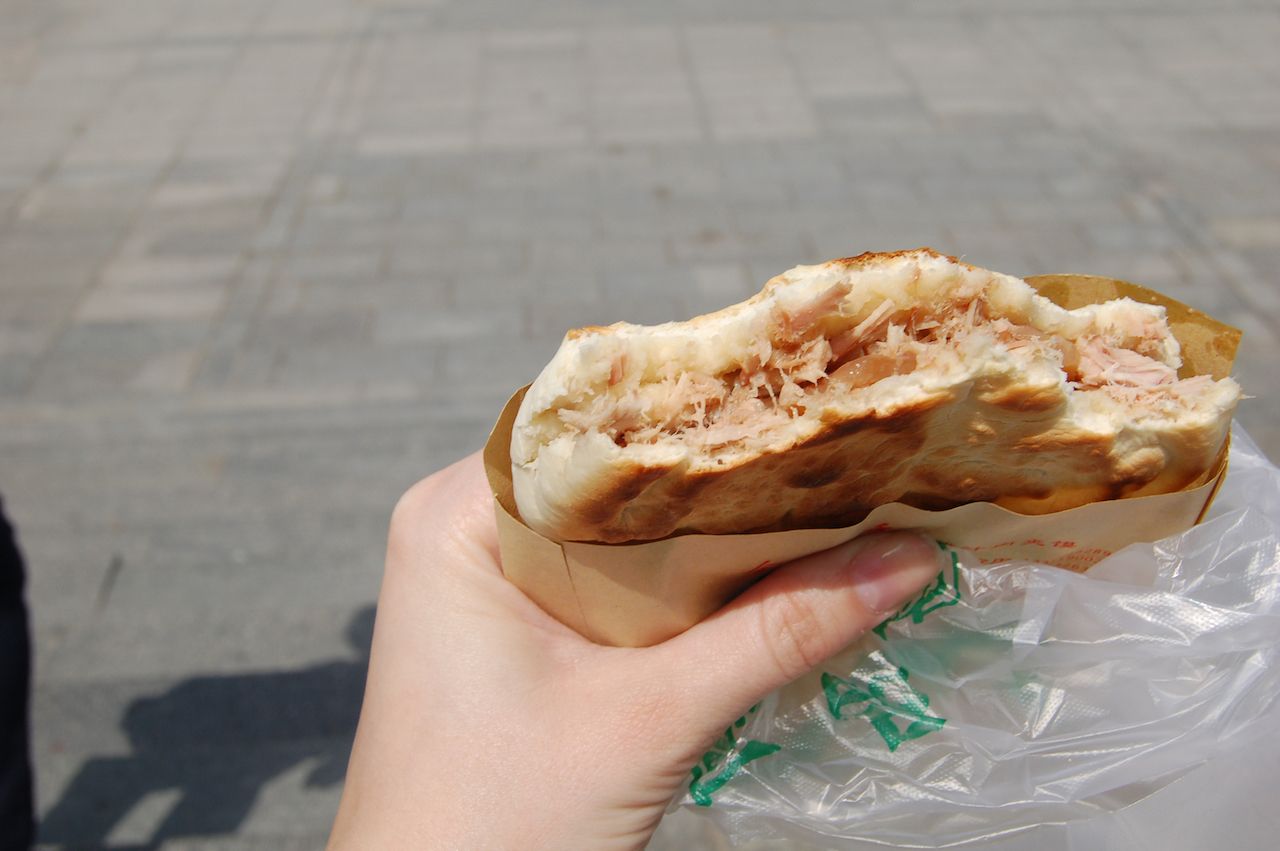 From the Shaanxi province, ròujiāmó are kind of like Chinese burgers. The word rou</em< means “meat,” jia means “put in,” and mo can be translated as “bread.” The usual filling is meat, with pork being the most popular. Traditionally, the pork is stewed for a while and seasoned with about 20 spices. The buns are made from fermented dough and cooked in an oven, giving it a soft, chewy taste. 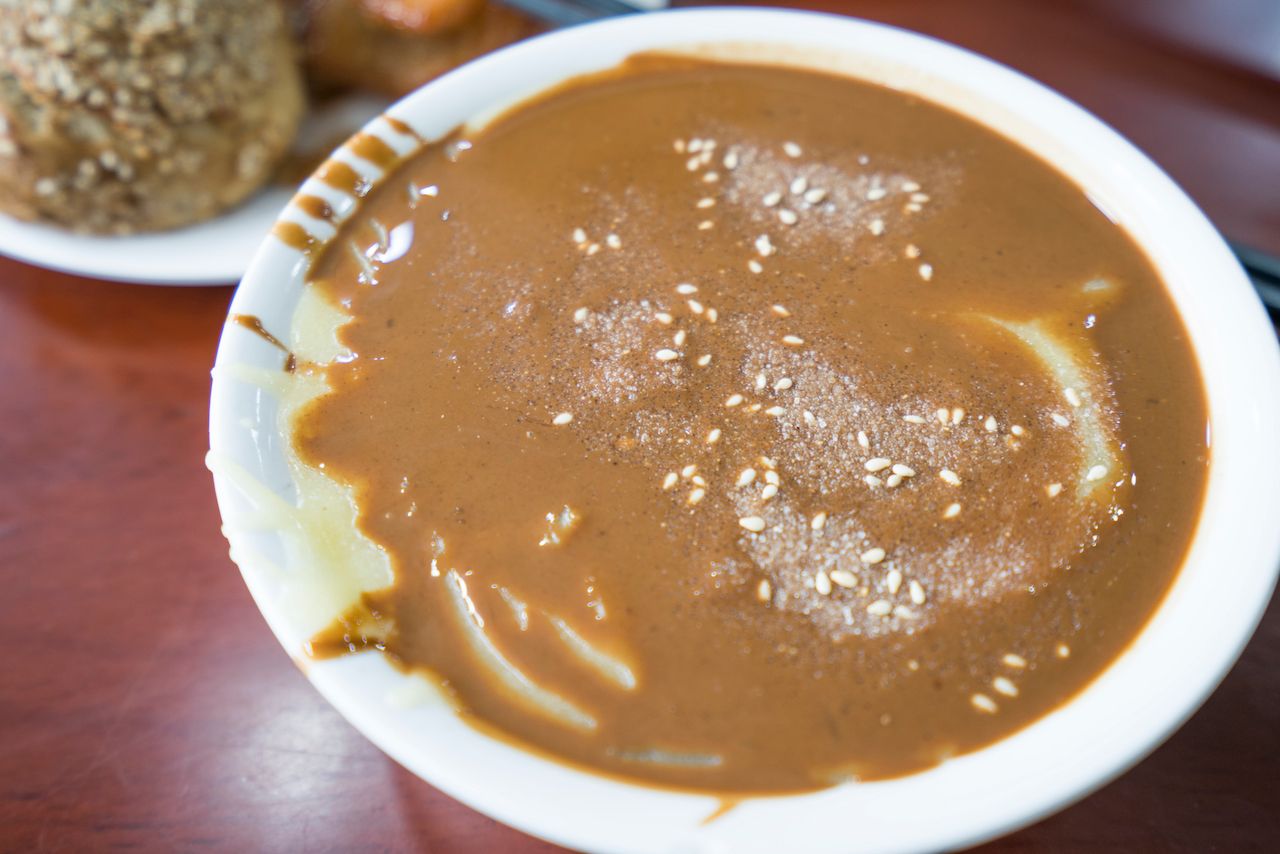 Miànchá is type of porridge that’s loved by locals in Beijing. It’s made with millet flour, which gives it a yellow tint, and the sesame paste seasoning is what makes the top brown. Also mixed in are sesame seeds, salt, and Sichuan peppercorns. Miànchá is a street food that’s a little harder to find than most but is usually sold in hutong alleyways. 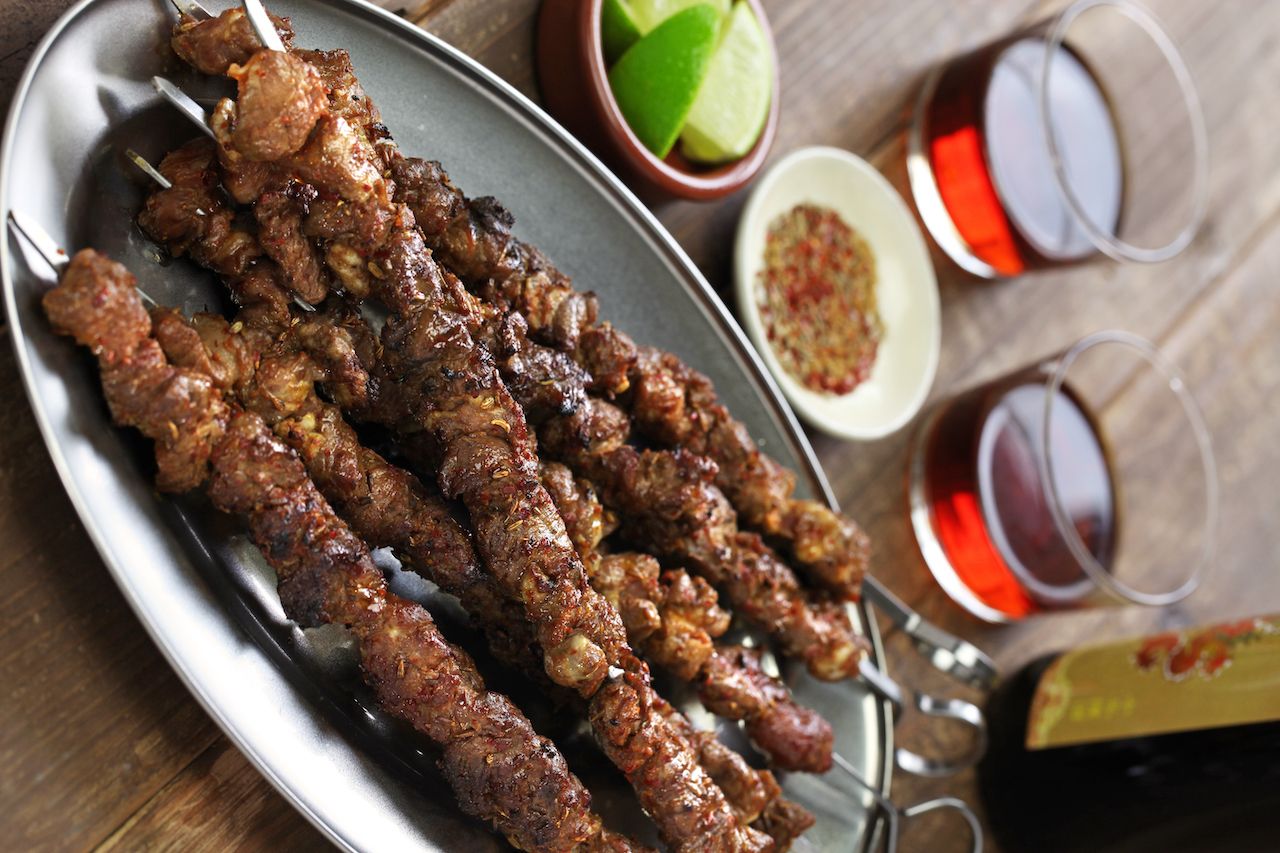 Chuàn are pieces of food on skewers, similar to shish kebabs. While lamb is the traditional meat used, beef, pork, or even non-meats are skewered by modern sellers. This street food originated in China’s Xinjiang region and is sometimes pronounced and spelled as chuan’r due to the northern pronunciation. When ordering chuàn, you can pick which spices are used to season it, but salt, pepper, cumin, sesame, and chili flakes are generally used. 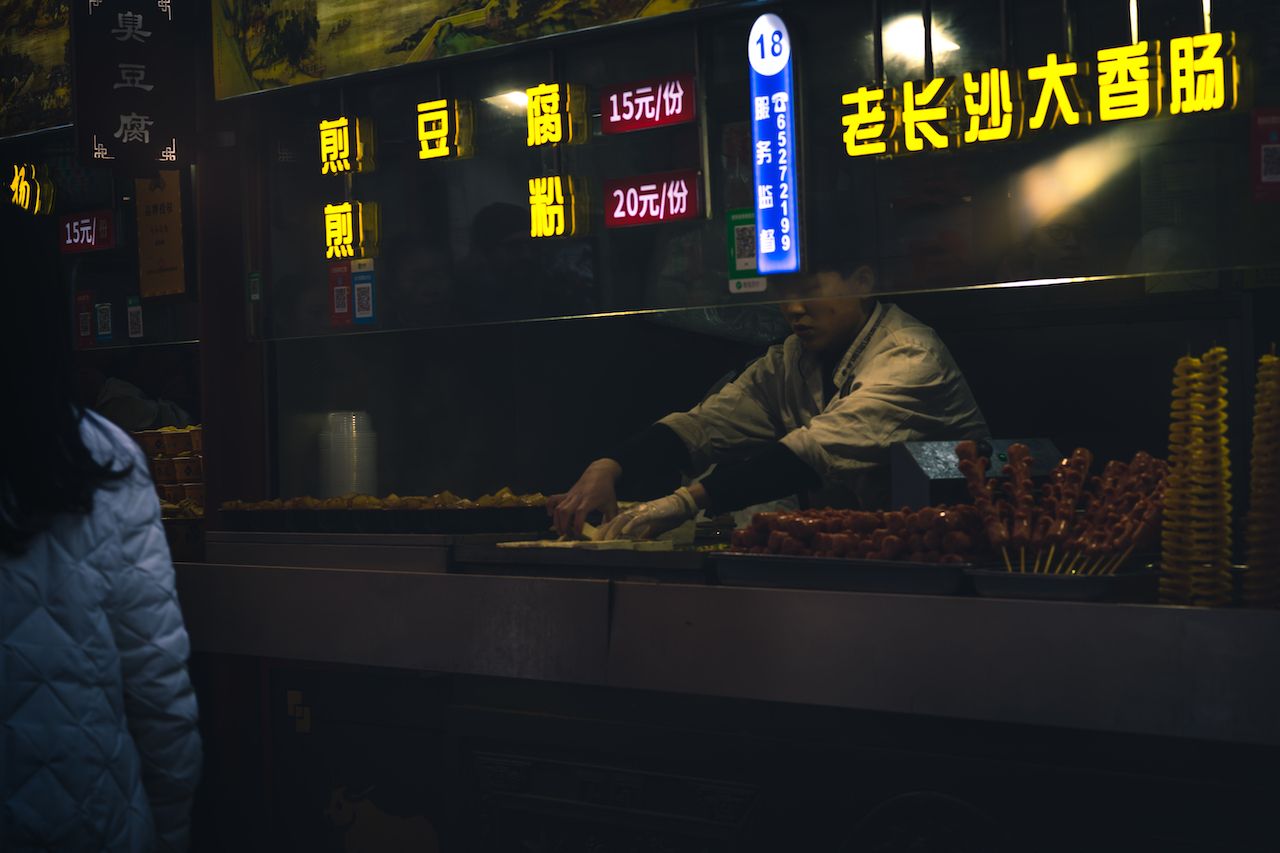 Instead of having food markets, Beijing’s taken the concept and expanded it into full on streets called food or snack streets. A particular street will be lined with stall upon stall, vendor upon vendor, serving up some of the most delicious (and, sometimes, most interesting) street food in the city. A few of the most popular ones are:

Wangfujing Snack Street — Located along Wangfujing Street, a busy shopping street. This particular snack street is popular among tourists, and as such, prices here are higher than others. It sells typical street food, as well as more adventurous dishes, like fried insects.

Guijie Snack Street — Also known as Ghost Street, Guijie is open 24/7. It’s always lively and full of people, and the street food here is cheaper than most.

Niujie Muslim Snack Street — Nicknamed “Ox Street,” this is a snack street where you’ll also find halal food. Along it is the Niujie Mosque, which is the oldest mosque in Beijing.

Where to Eat
Tagged
Food + Drink Beijing, China
What did you think of this story?
Meh
Good
Awesome

The best Airbnbs in Beijing for every type of traveler

Where to eat at Beijing Capital International Airport

The 7 most fascinating mosques in China