Beijing, with its long history and myriad ethnic communities, has a rich culinary tradition. Today’s restaurants and food stalls blend traditional dishes with contemporary techniques and ingredients, and are still enjoyed by locals daily. They speak not only to the city’s imperial past but also the vibrancy of modern Beijing life. Food, when thoughtfully consumed, is one of the best ways to learn about the history of the city. This is the story of Beijing through six essential dishes. 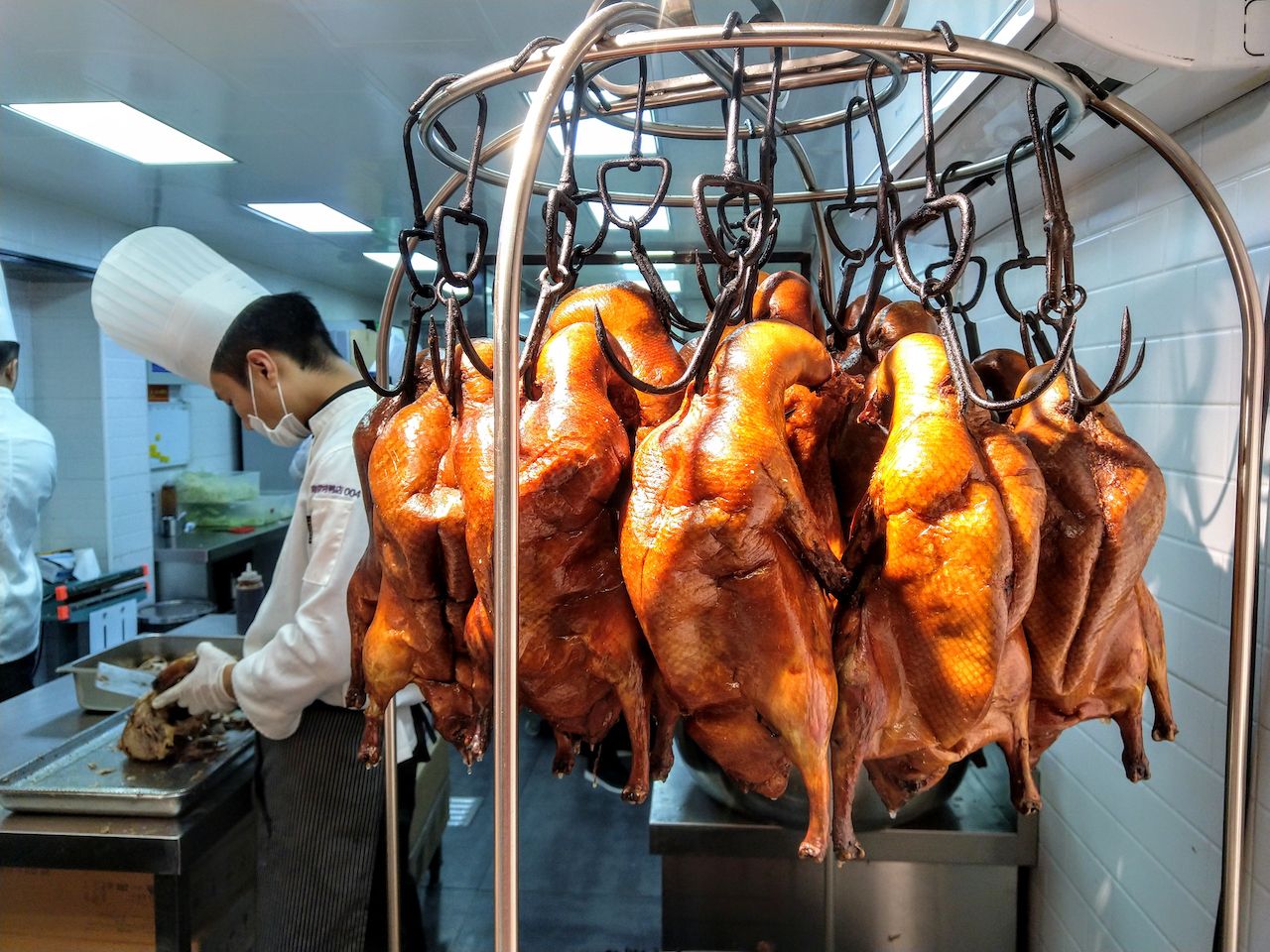 Peking duck is prepared by glazing the bird with spices and syrup, then letting it air-dry for 24 hours. After, it’s roasted in an open oven. Once cooked, it’s served in a paper-thin wrap filled with pieces of meat and skin, relishes like onion and cucumber, and fermented bean paste.

The history of Peking duck starts when Yongle Emperor of the Ming Dynasty staged a coup in 1402 and moved the national capital to Beijing from Nanjing. Many imperial chefs moved along with the court, bringing with them the duck dishes that the royals loved. Over the next 500 years, roasted duck grew in popularity among Beijing aristocrats. By the late 19th century, Beijing was dotted with duck restaurants. The most famous is Quanjude, which opened in 1864 and democratized the dish for average citizens.

Peking duck also played a role in China’s diplomatic history. It was served to Henry Kissinger when he visited Beijing in 1971. Today, Peking duck is affordable and is regularly enjoyed in family banquets. 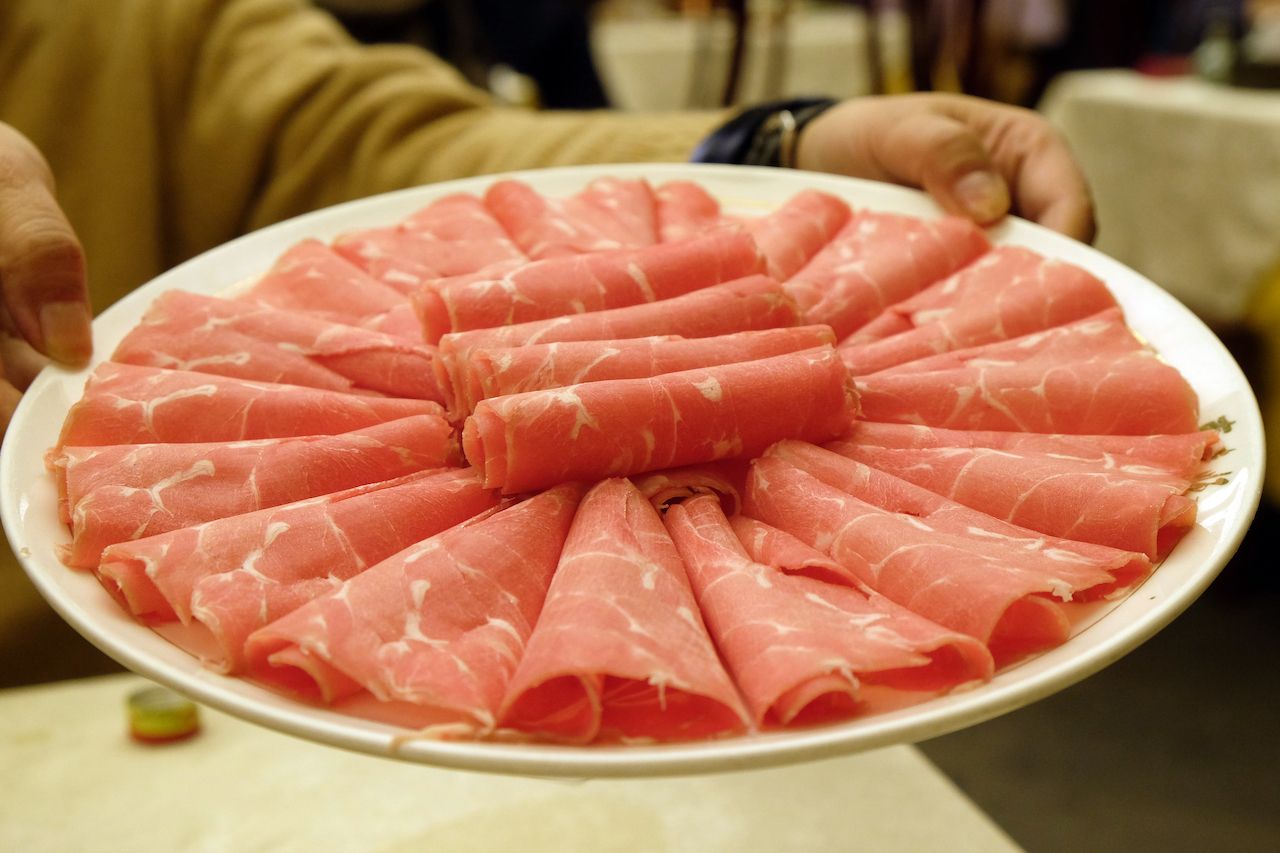 Shuan yang rou (swished lamb) is essentially a lamb-only hot pot served in a copper pot with a charcoal-filled chimney in the middle, and the meat comes from Beijing’s nearby pasture region. Unlike its Szechuan cousin with elaborately prepared broths and ingredients, the Beijing version is minimalist (but equally hearty). The hot pot is characterized by thin lamb slices that are dunked and swished in boiling broth spiced with ginger and scallion. It’s then dipped in flavorful sesame paste or garlic-chili sauce that’s prepared according to secret house recipes. 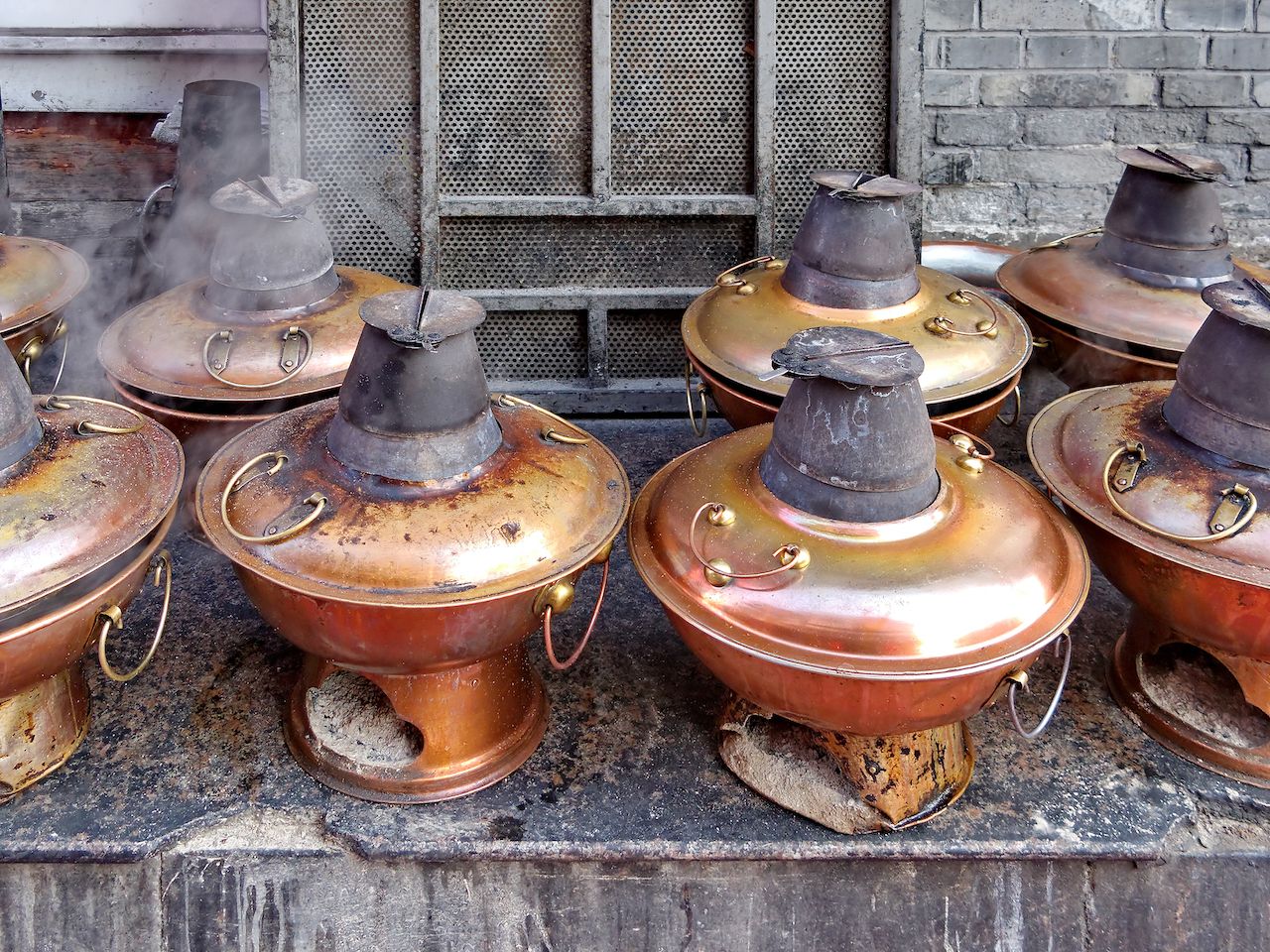 The hot pot tradition comes from the Mongolian Yuan Dynasty. Mongolians conquered what is now Beijing in the early 13th century and made it the capital of the empire. Today, the dish is halal and popular with the Muslim community, and the warming meal is sought out in the colder months. 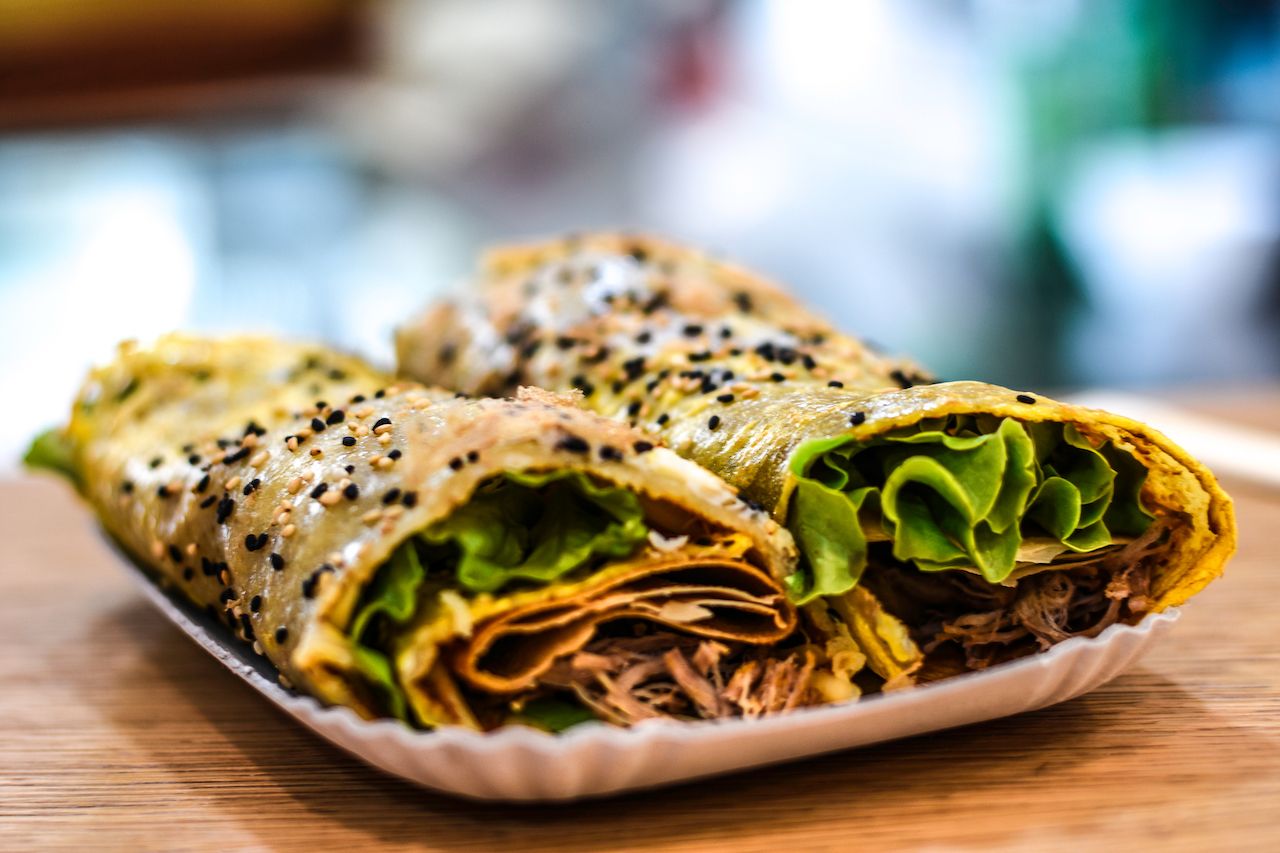 Jianbing is a crepe-like dish filled with sauces and meat. According to legend, it was first made thousands of years ago in what is now Shandong province (just south of Beijing) by soldiers who were forced to cook on a flat surface (some say their shields) after they lost their woks.

Streetside jianbing peddling in Beijing was used as a means to cope with economic hardship and achieve financial stability during tough economic times. Husband-and-wife teams would load a gas stove and prepared ingredients onto a three-wheeled bicycle, roll it out to a designated street corner, and get ready for the rush hour crowd in the early morning.

The low-cost and high-calorie comfort food fits the hectic Beijing life so well that it soon became a favorite on-the-go breakfast. The vendor spreads a wad of batter thinly over a crepe pan, cracks an egg, and spreads the yolk evenly. When the batter-egg mixture is cooking, the chef smears a layer of hoisin sauce and/or hot sauce on top, then sprinkles on some cilantro and sesame seed. Deluxe toppings like dried meat and spam can be added on demand. The cooked crepe is then folded into a palm-sized square and is ready to be enjoyed on your commuter bus. 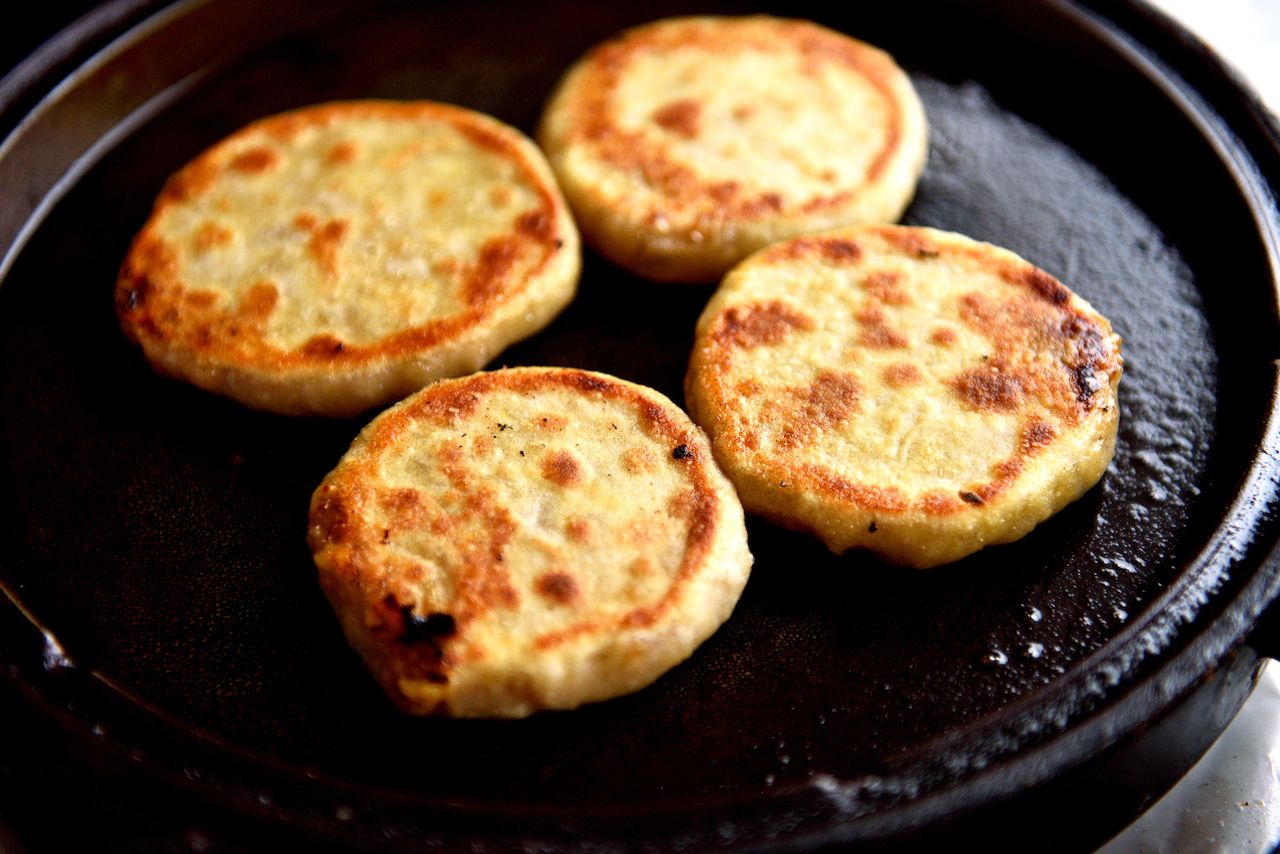 The Mongolian Yuan Dynasty controlled Beijing in the 13th and 14th centuries and had a big influence on the food. This meat pie is one of the biggest contributions and is especially popular today among the Muslim community. A traditional Beijing Muslim food is mending (“doornail”) meat pie, so named because it looks a lot like the doornails on old city gates. Each is about two inches high and three inches wide. The cylinder-shaped pie is extremely filling. The inside is made with high-fat ground beef mixed with minced scallion and ginger. The mixture is then stirred vigorously, rendering it a chewy and succulent texture. It’s all wrapped in slightly leavened dough and grilled on a sizzling griddle. 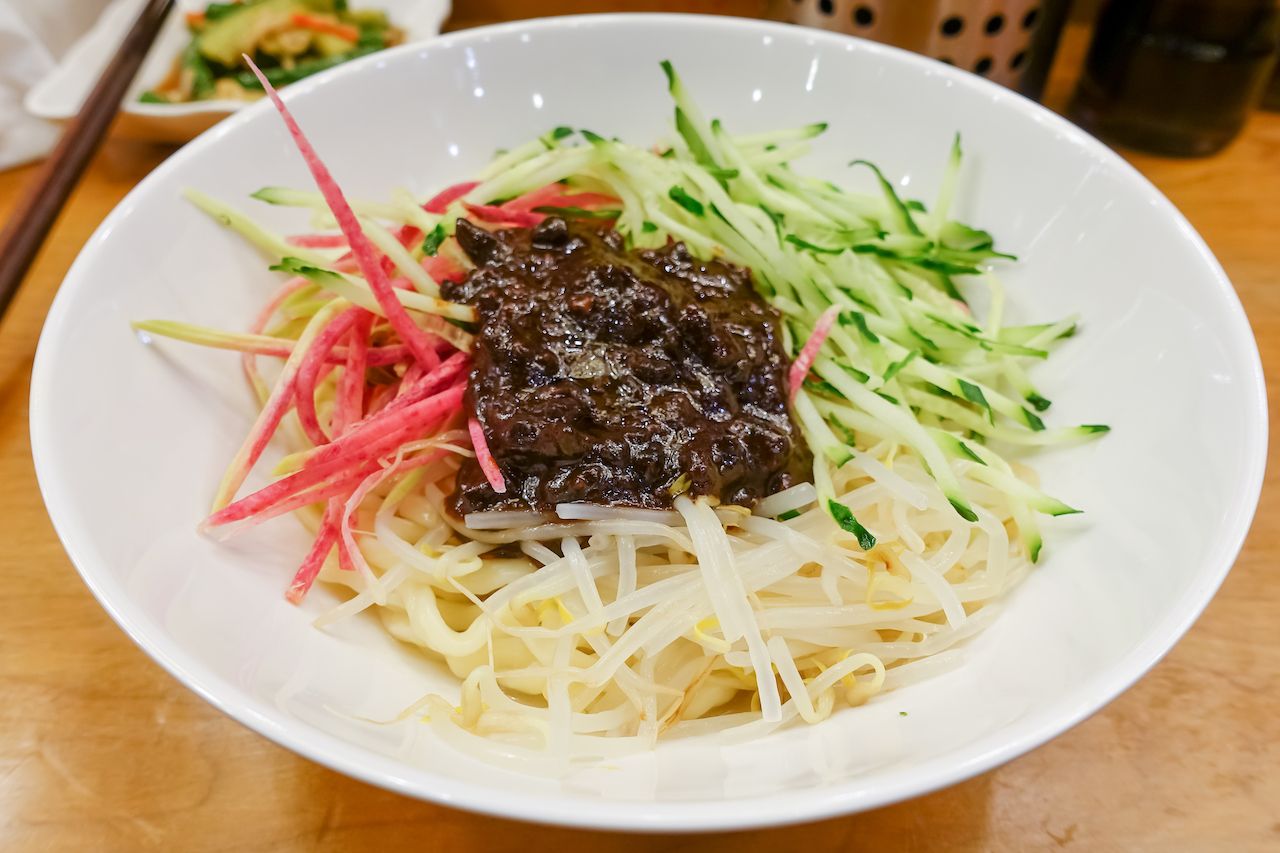 On a sweltering Beijing summer day, nothing is more soothing than a bowl of zhajiang noodles. Zhajiang is a sauce made from stir-fried beef or pork simmered in fermented soybean paste. Thick wheat noodles, cooked al dente, are rinsed in cold water and drained and sometimes drizzled with sesame oil. The noodles are topped with a big dollop of the zhajiang and garnished with a generous portion of sliced cucumbers, edamame, and vegetables.

The convenience of the dish makes it a common summer homemade meal, yet it had also been a royal favorite. According to legend, Empress Dowager Cixi fell for roadside zhajiang noodles after she escaped from Beijing during the Boxer Rebellion around 1900. When she returned to the palace, she demanded that the chef be brought to the court to make the same dish. Today, you can find zhajiang noodles in most local restaurants. 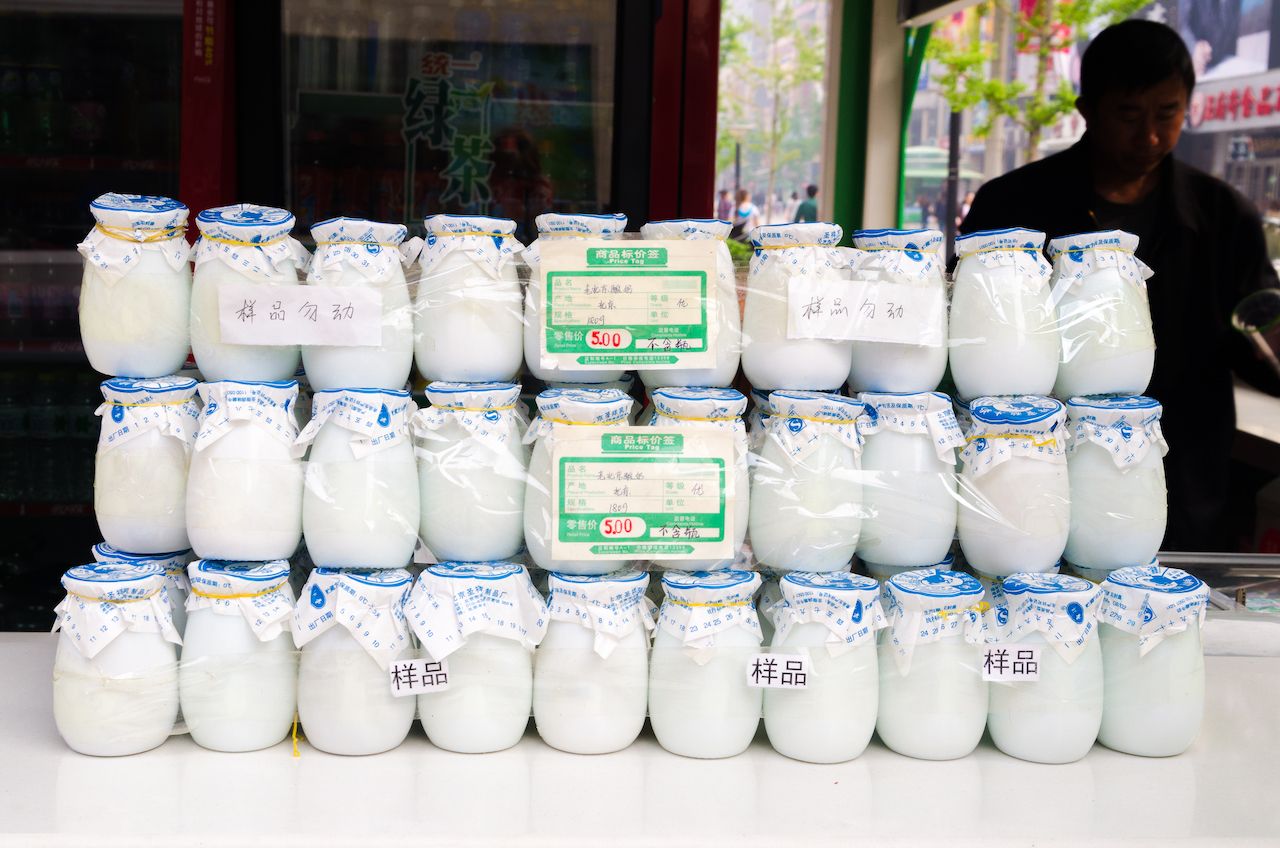 Beijing kids have fond memories of “yogurt in a jar” as an after-school snack. Perishable dairy products were traditionally a luxury restricted to the Beijing upper class. However, yogurt in a jar became popular as a health food in the second half of the 20th century. The yogurt is slightly sweetened, giving it a tangy flavor. It’s left fermented in a ceramic jar that’s sealed with parchment paper. Stab the paper cover with a straw and slurp the cool, tangy, jelly-like yogurt as you wander the narrow streets in the old city. Don’t forget to return the jar to the vendor, who sends them back to the factory for reuse. Or pay extra for it as a souvenir. Or, if you have a dairy subscription like a typical Beijing resident, return the jars when you pick up your yogurt the next day.

Food + DrinkNaxi Cuisine Is the Chinese Food You’ve Been Missing Out On
Tagged
Food + Drink China Beijing, China
What did you think of this story?
Meh
Good
Awesome

8 Sweet, Savory, and Delicious Chinese Desserts You Have To Try