There’s a good chance that you’re familiar with vodka and whiskey. It’s possible you’re familiar with mezcal and various types of amaro. But even people who know their way around a bar are usually unfamiliar with baijiu, ironically, the most popular spirit in the world. Luckily, there’s never been a better time to learn about China’s national liquor.

As Derek Sandhaus, the co-founder of baijiu brand Ming River and the author of Baijiu: The Essential Guide to Chinese Spirits, wrote in his book: “Baijiu is coming for the world, and the invasion is already well underway.”

Baijiu means “white liquor” in Mandarin, which is a fittingly broad description for a beverage that varies widely in taste and strength depending on where it’s made. Production peaked in the 1990s when there were somewhere between 18,000 and 36,000 distilleries. Today, there are around 10,000 distilleries, according to Sandhaus. The vast majority of baijiu is only found in China, with the exception of a limited number of restaurants catering to Chinese populations around the world. Still, thanks to China’s large population and baijiu’s role in Chinese culture (baijiu makes up 99.5 percent of all liquor consumed in China), it’s believed to be the most consumed spirit in the world.

How baijiu became the most popular spirit 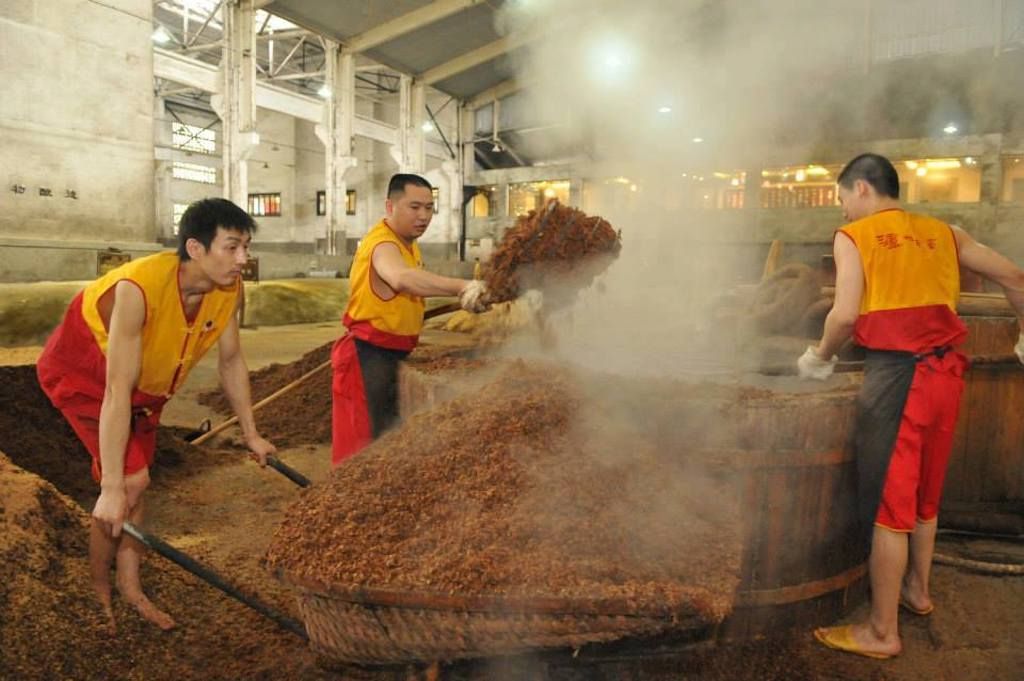 The oldest evidence of alcohol production dates back to clay pots from somewhere between 7,000 and 5,800 BC in the Henan Province in northeastern China. Alcohol was a luxury used for military, bureaucratic, and religious ceremonies, and played a part in everyday life. Knowledge of distillation techniques reached China either through trade with the Middle East between 960 and 1270, or when the Mongolian Yuan dynasty ruled from 1271 to 1368. Then, from distillation came baijiu.

The spirit wavered in popularity over the centuries. At times it was heralded as the working class’ drink, and at times it was demonized as destroying society. Yes, just like the US and countless other countries around the world, China has gone through periods where alcohol was viewed as a social ill rather than part of cultural traditions.

The modern era of baijiu starts just after World War II when the Chinese Communist Party nationalized the alcohol industry. Zhou Enlai, the first Premier of the People’s Republic of China, named the Kweichow Moutai distillery’s baijiu as the government’s official baijiu. It’s been served at state dinners since the 1950s — and lots of it. Nixon famously drank Moutai baijiu in 1972 during a state visit to China, and two years later his Secretary of State Henry Kissinger told a Chinese diplomat, “I think if we drink enough Moutai we can solve anything.”

When doing research for his book, Sandhaus found a report from China’s state-run media in 2011 that put a number on how much food and drink for official functions costs the government. The total? More than the national defense budget. Moutai was banned from state banquets in 2012, which had two effects: prices dropped to appeal to a wider audience, and producers started the search for other markets. This brings us to where we are today.

“It can seem from the outside looking in that baijiu has been the next big thing for a while, but it [hasn’t reached that point yet],” Sandhaus told Matador Network. “But the market has actually gotten noticeably bigger every year, it’s just when you’re starting from zero you’re a long way from the saturation point. We’re a lot closer than we used to be.”

The four major types of baijiu 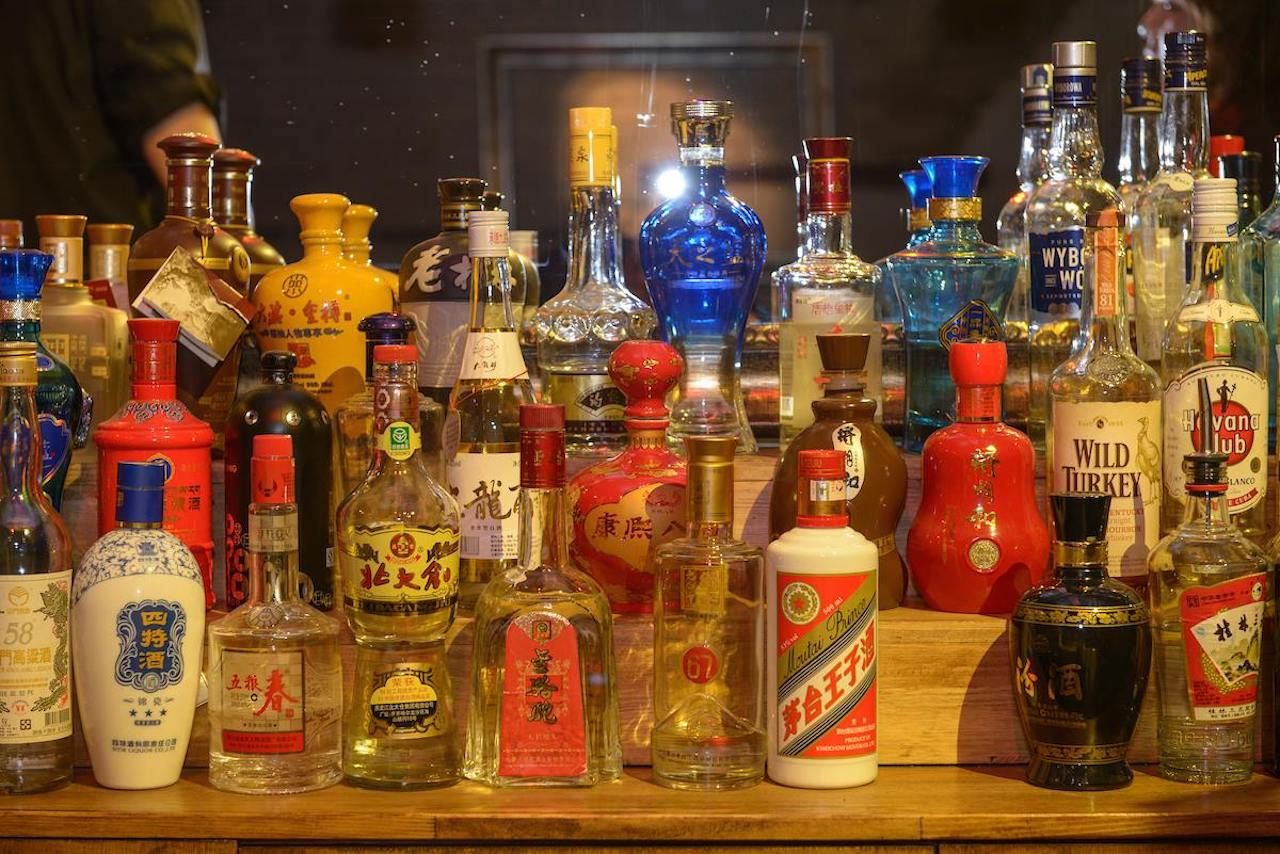 In all of the different styles of baijiu, the one ingredient that ties everything together is qu (pronounced “chew”). Qu is like a yeast starter for sourdough bread in that it initiates fermentation and, in many ways, determines the final overall flavor. It looks somewhat like a brick of finely ground grain, and it’s loaded with native yeasts. To make baijiu, qu is combined with water and grains, most often sorghum but also rice, wheat, and corn depending on the style.

There’s no malting process like what happens with whiskey and other spirits. Instead, the grains are fermented by the qu at the same time that the grain’s starches are converted into sugar. Baijiu is distilled from the solid or semi-solid fermented grains, much like how grappa is distilled from grape pomace. Many baijiu styles distill the fermented grains once, so the funky flavors from fermentation shine through in the final spirit.

There are plenty of different styles of baijiu, but the easiest way for beginners to understand it is by trying four basic styles, or “aromas”: rice aroma, strong aroma, light aroma, and sauce aroma.

“With baijiu, the idea is that each one comes from a different region,” Sandhaus said. “Each one is meant to compliment a very different flavor profile. That’s very much by design.“

Rice aroma: This is the only style of baijiu that’s made entirely from rice, and comes from southeastern China. The clean taste and smell is generally on the light, sweet, and floral side. For comparison, think of other rice-based spirits like shochu. Vinn Distillery in Oregon, the only baijiu made in the US, makes a rice aroma spirit based on a family recipe that goes back seven generations.

Light aroma: Often the cheapest style of baijiu, light aroma is most popular in Shanxi, Beijing, and the northeastern provinces. Don’t be fooled by the term “light.” This style is usually more than 50 percent ABV, and can reach above 60 percent. It’s made from sorghum and fermented in stone pots or pits, and then aged in ceramic jars after distillation. It has less of an aggressive smell and flavor than other baijiu styles, and can be slightly sweet, floral, and melon-like. All you have to do to enjoy it is get over the strength.

Strong aroma: Hailing from Sichuan Province, strong aroma is the most popular style of baijiu and makes up two-thirds of all baijiu produced, according to the Ming River-sponsored baijiu education website Drink Baijiu. It’s fermented in mud pits, and the final distillate has tropical fruit notes like pineapple, banana, and passionfruit — the ideal match for Sichuan’s spicy food. It’s also one of the easiest for Western palates. The mud pits aid in fermentation as more grains are added. The Luzhou Laojiao distillery, where the Ming River brand (among others) is made, has pits that date back to 1573. 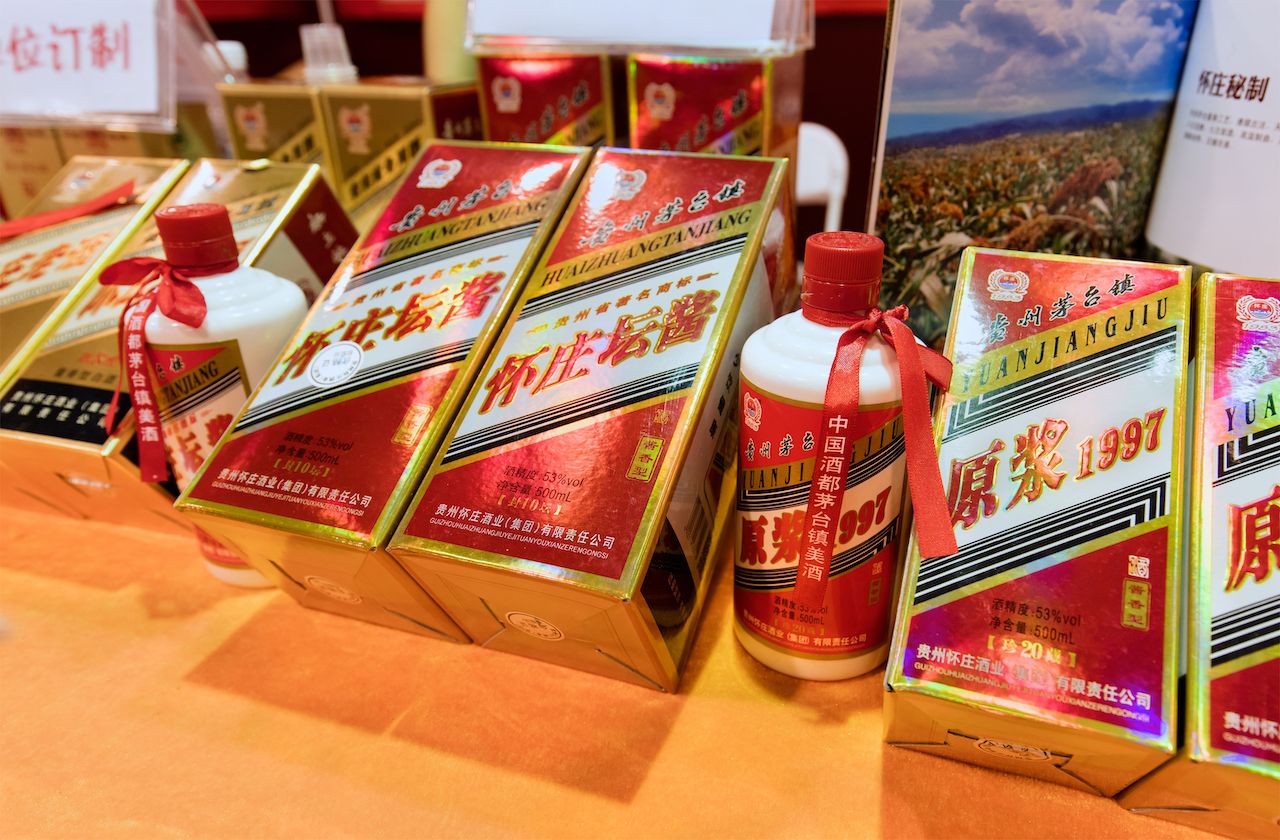 Sauce aroma: Sauce refers to soy sauce, and this style of baijiu is deeply savory. It comes from Guizhou Province, and can fetch some of the highest prices. The baijiu made at Kweichow Moutai, which used to be the official baijiu of the government, is a sauce aroma. It’s made by fermenting grain in stone-lined pits, and unlike other styles, new grain is simply added on top of the spent grain which creates a depth of flavors. This can be the most challenging style for people used to Western flavors, and is most comparable to foods like fermented bean paste and dark rice vinegar. Sandhaus described starting your journey into the flavors of baijiu with sauce aroma as choosing the peatiest of peaty Scotch whiskies to learn about Scotch.

How to drink baijiu 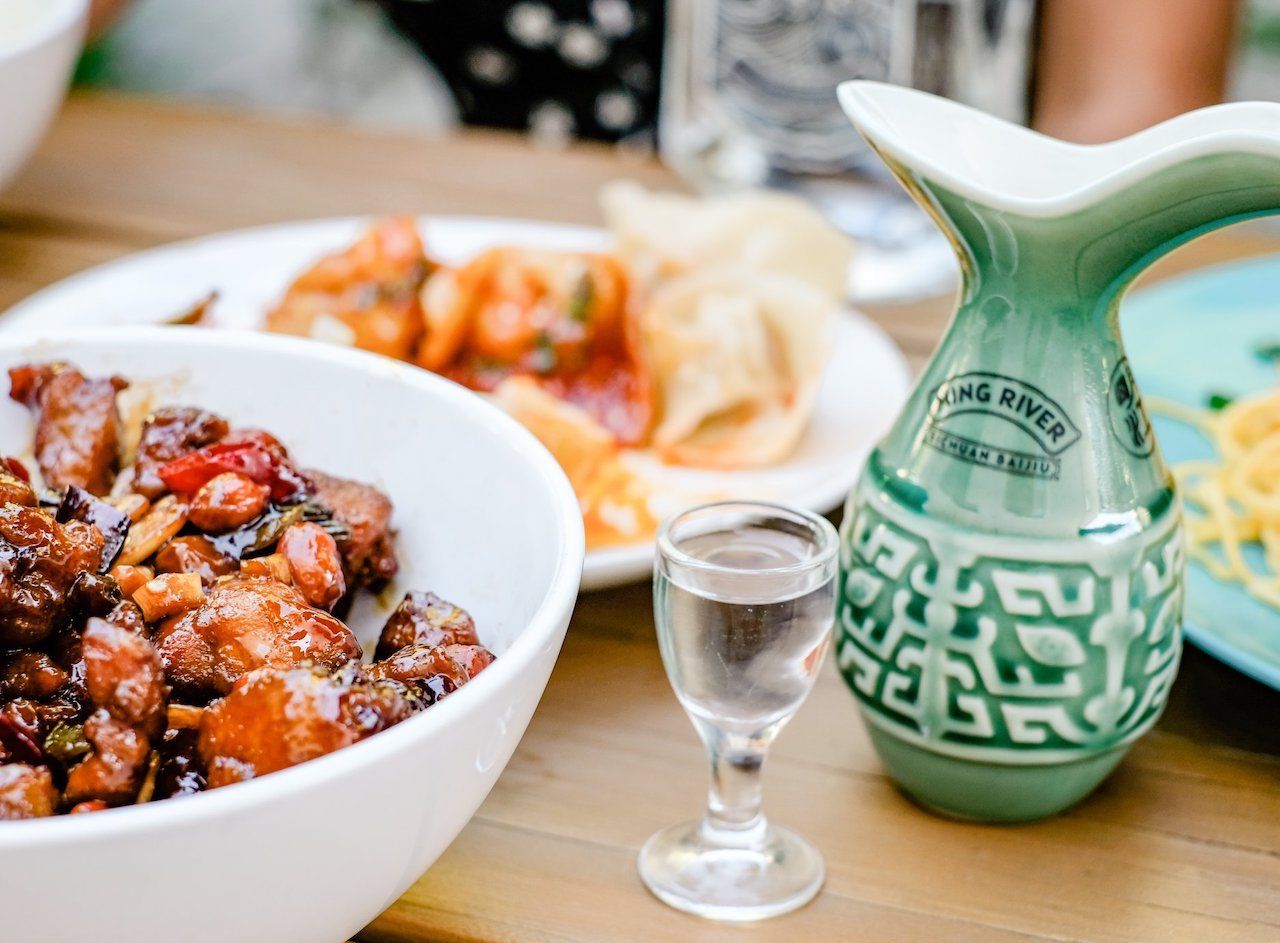 “In China, the way you really consume baijiu is with food and with other people,” Sandhaus said. “It’s not a drink intended to be consumed by itself or by yourself.”

Food is one of the most important parts of drinking baijiu. For one, the flavors of baijiu from a certain region complement the cuisine from the same region (and there are many, many different styles of regional Chinese food). Spicy Sichuan food that’s loaded with mouth-numbing Sichuan peppercorns, for example, pairs perfectly with strong aroma baijiu.

“The underpinning aesthetic condition of Chinese cuisine and Chinese alcohol is that you want to have a lot of different flavors but you want those flavors to be balanced,” Sandhaus said. “There’s a lot of variety, but not one thing dominates.”

The second reason food is important when drinking baijiu is because the spirit is strong and the drinking sessions are long.

Baijiu is traditionally served throughout a meal in thimble-sized shot glasses. It’s drunk neat and consumed after a toast. After each toast, whether you’re the one giving it or the one listening, you’re expected to drink. You can choose not to drink if you have a medical condition, but it’s rude to stop taking the mini shots of baijiu midway through a drinking/eating session if you’ve already started.

How to learn about baijiu 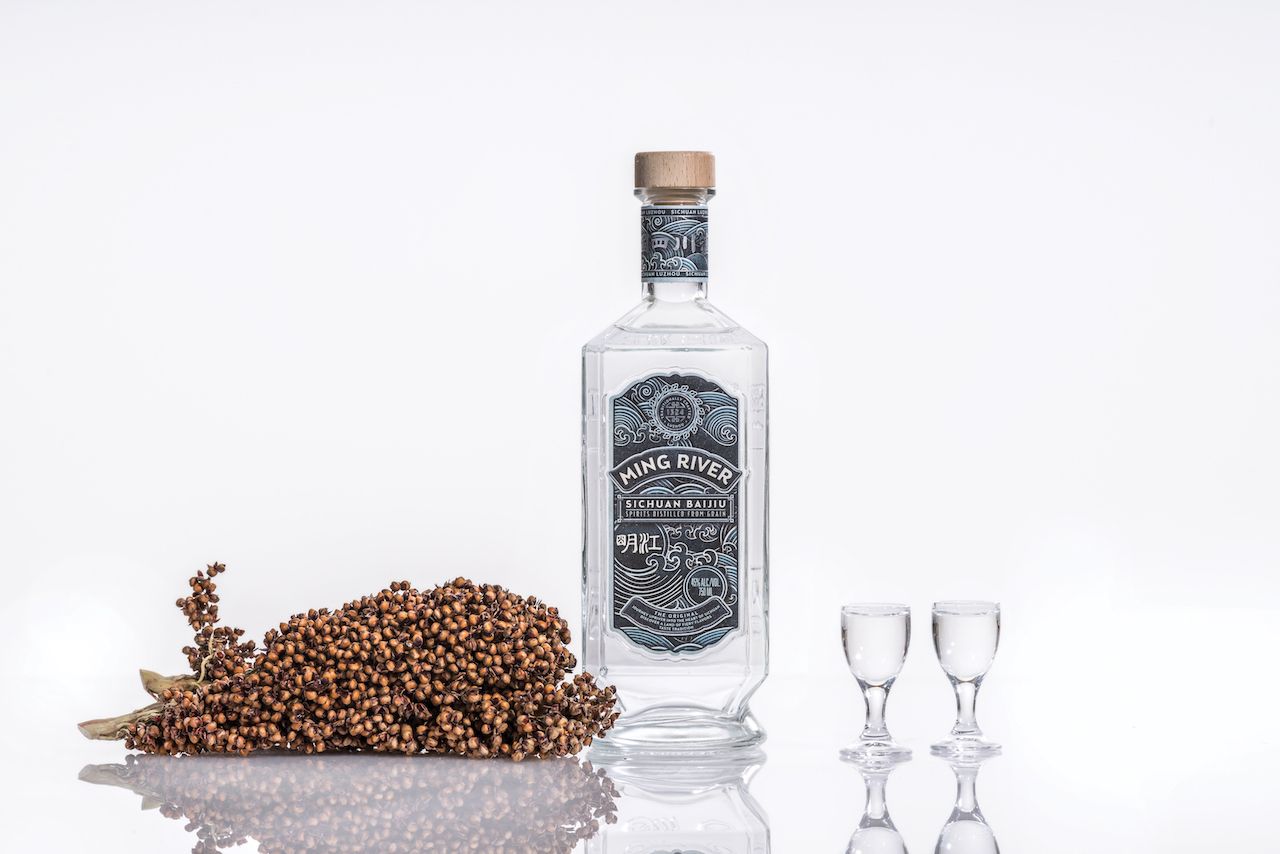 The only way to get a taste for baijiu is to try it yourself. For now, you may have to seek out Chinatown liquor stores and restaurants, but it won’t be long before you start seeing baijiu popping up in liquor stores and bars across the country. Ming River in particular is a name that you’ll start to see more as the brand works with an increasing number of bartenders to create cocktails palatable to Americans.

The traditional way to drink it is straight, however. The flavors are generally something you get used to rather than something you immediately fall in love with. But with so much variation, it’s easy to sample multiple types to find what is best for your palate. Once you find what you like, the options can seem limitless with hundreds, if not thousands, of producers to seek out that are making baijiu in your preferred style.

“That’s what makes it fun and rewarding as a category,” Sandhaus said. “If you know what you’re looking for, it’s something you can explore and enjoy pretty much forever.”