We hope you love the spaces and stays/products we recommend! Just so you know, Matador may collect a small commission from the links on this page

Air travel leaves a lot to be desired, but sometimes, it’s the sheer boredom of flying that’s hardest to overcome. While movies, music, books, and good old-fashioned sleep can help pass the time, these are all hard activities to share with your traveling companions on a flight. Enter airplane games. Some games can be played offline on various devices. Others require no materials at all. But it’s also possible to recreate game-night-style fun 40,000 feet in the air. Here are nine board and card games that can fit on your tray table, come with easy-to-manage pieces, and can be played side-to-side with your seatmate that are perfect for your next flight.

Monopoly Deal is a cards-only spinoff of everyone’s favorite real-estate-themed board game. All you need to play is the 110-card deck, which comes with rule cards, action cards, property cards, property wildcards, rent cards, and money cards, as well as a small surface like an airplane tray table to draw from the deck, create a pile of action and money cards, and lay down property cards. The objective of the game is to be the first to collect three full monopolies.

Backpacker is a travel-themed card game that’s easy to pack and play on the road. There are two types of cards in the Backpacker deck: country cards, which represent various destinations and the number of points each one is worth, and color-coded event cards, which issue directives that can either benefit or disadvantage players. Designed for two to six players, the game begins with everyone being dealt five cards, after which players take turns drawing and playing a card each round. When the draw pile runs out, the player with the most points wins.

The makers of Settlers of Catan have released multiple versions that are fit for travelers. While the travel edition is compact enough to whip out on an airplane, the pieces are small and loose, which can be problematic on bumpier flights. A better choice is Struggle for Catan, a card game based on the Catan universe. Traveling duos might also enjoy Rivals for Catan, a two-player strategy game that feels more like a card-based adaptation of the original board game. 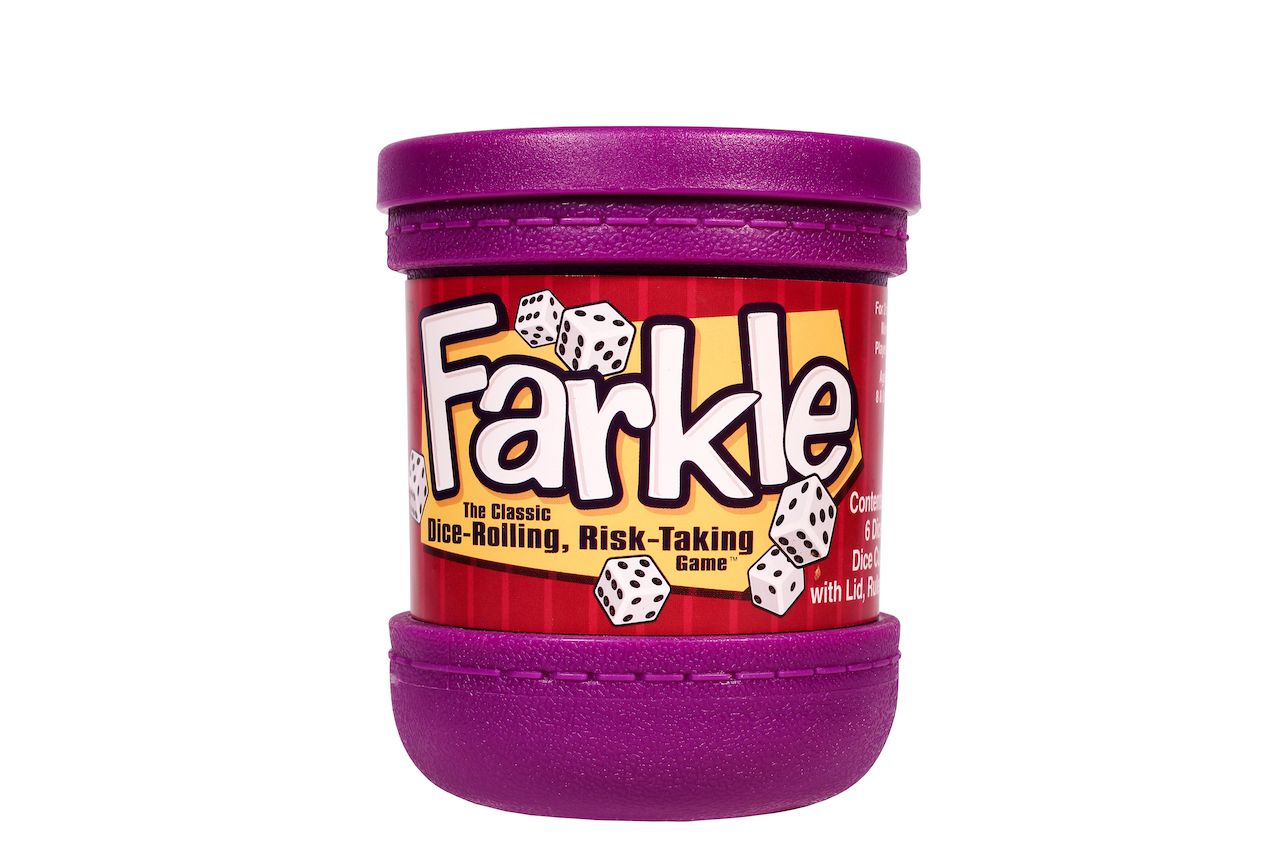 Farkle is a dice game based on poker combinations similar to Yahtzee though there’s less strategy and more risk involved. The object of the game is to score at least 10,000 points by rolling different combinations using six dice. How many times a player rolls per turn is up to them. The catch is that a player risks losing all the points they’ve tallied in a given turn as soon as they fail to score points on a roll. To make Farkle plane-friendly, travelers can download a dice-rolling app that works offline rather than attempt to throw actual dice.

Popular in England, Napoleon is played with a standard deck of cards. It’s a trick-taking game similar to bridge or euchre, only simpler. Players are dealt five cards, which they assess to bid on the number of tricks out of five they think they can win with a given trump suit. The highest bidder sets the trump suit. The game is then played in rounds, with each participant laying down one card per turn. The person who played the highest trump card, or the highest card of the suit led if no trump cards are played, takes the trick. Aces are high, and most tricks win. 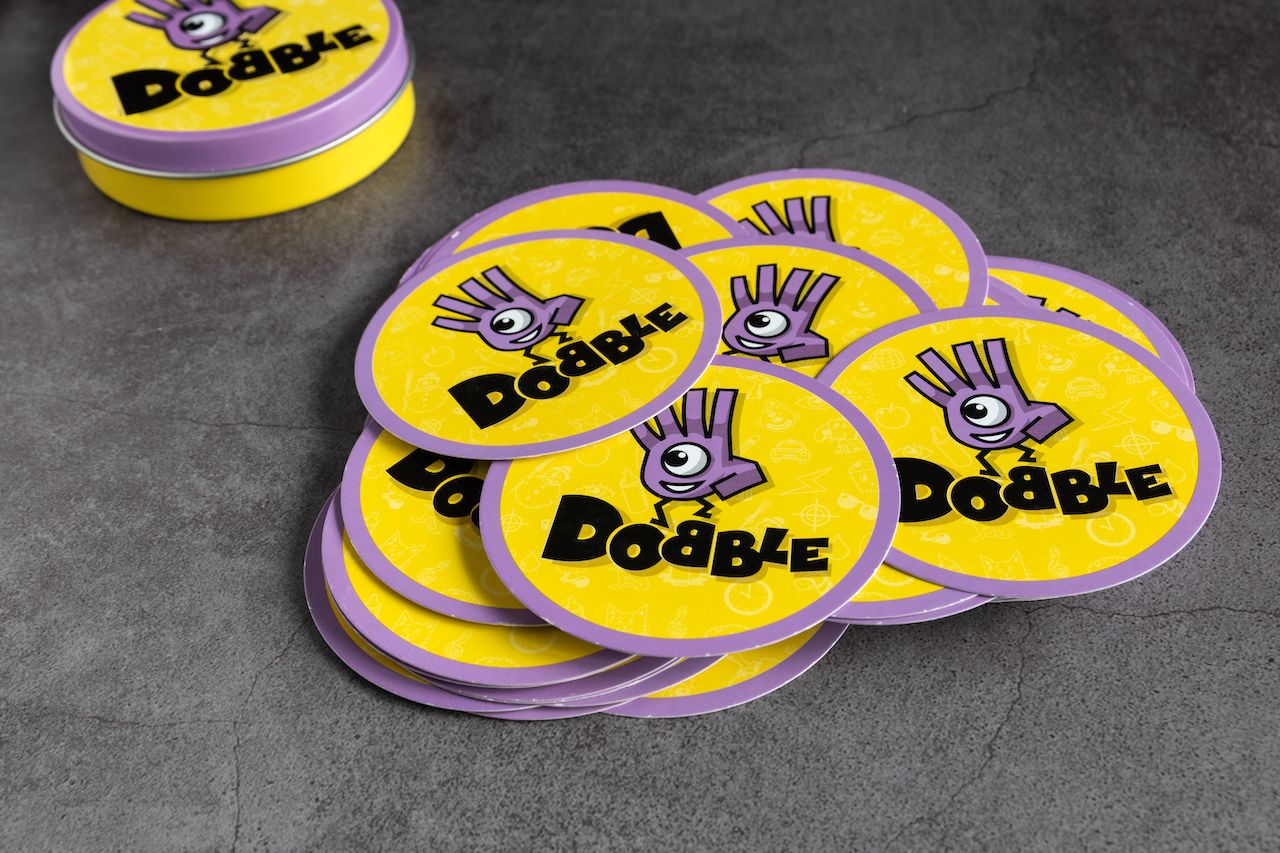 Dobble is a specialty card game based on “speed and observation.” The deck consists of 55 round cards that are printed with various symbols. Every card in the deck has exactly one symbol in common with every other card. The gameplay is simple: The first person to spot and name the shared symbol wins the card before laying down the next one. Recommended for two to eight players ages eight and up, Dobble also comes in fun themes like Harry Potter.

Based on the board game Hive, Hive Pocket is a two-person boardless strategy game that can easily be played on a tray table, although you’ll want to keep an eye on the pieces. There are 22 pieces total, 11 black and 11 white, each of which is stamped with a critter such as ants, bees, and ladybugs. Players also get a piece representing a queen, which must be played within the first four rounds. The object of the game is to completely surround the other player’s queen.

Cribbage is a hybrid card and board game that’s perfect for long flights. It uses a standard deck of cards and a rectangular board that’s fitted with holes which players can use to advance their pegs. The pegs are small but secure, making them perfectly plane-friendly if you’re careful not to drop one. Cribbage rules seem complicated at first, but it’s a straightforward numbers game at its core, with players collecting points by creating runs similar to card games like rummy. Two players is ideal, but as many as four can participate, depending on your seatmates.

Love Letter is a quick-play card game of “risk, deduction, and luck” that’s compact enough to fit in your back pocket. Players assume the role of suitors whose goal is to deliver a love letter to a princess while preventing their competitors from doing the same. There are only 16 cards in the deck, each of which represents a character, has a points value, and describes an action item, such as the priest card allowing one player to look at another player’s hand. The game is played in rounds. At the end of each round, a player wins a token of affection. The first player to earn enough tokens to win the princess’s heart is the overall winner.

Culture9 Boardless, Cardless Games To Play Anywhere
Tagged
Airports + Flying
What did you think of this story?
Meh
Good
Awesome

The 8 Best Neck Pillows for Falling Asleep on Any Trip, According To a Sleep Science Coach