While people who live in New York City may seem like they’re always on the go, we do make time for a morning meal — it’s the most important meal of the day, after all, and we need a lot of energy to get through our busy days. Whether you’re looking for breakfast to go, brunch, or a place that serves breakfast all day, you need to start your day in the Big Apple the right way. This is where to go and what to eat for the best breakfast in New York City.

1. Absolute Bagels in the Upper West Side, Manhattan 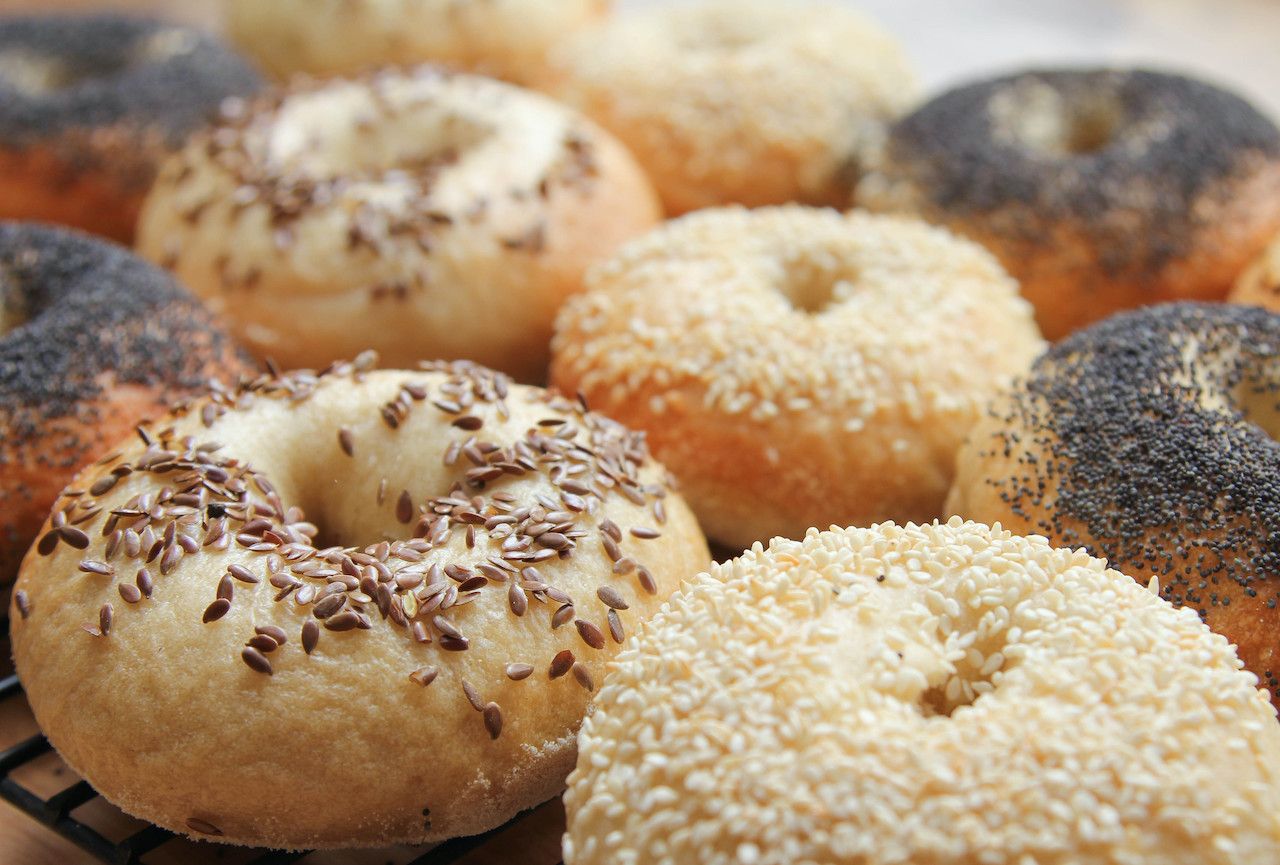 There’s nothing like a NYC bagel. While there are disagreements on butter vs. cream cheese and toasted vs. not toasted, there’s a consensus among us all that the bagel is king of breakfast foods. Absolute Bagels is a to-go, cash-only venue close to Central Park in Manhattan, and it’s beloved by all. Freshly made on the day, every type of bagel is available, from cinnamon raisin to egg to pumpernickel. What spread to get is the probably the hardest decision you’ll have to make, with over ten different kinds, ranging from the tried-and-true plain cream cheese to sundried-tomato cream cheese. Prices start at $1.45 and go as high as $3.95. Vegetarians and vegans can also go wild here, with nine tofutti spreads to choose from. 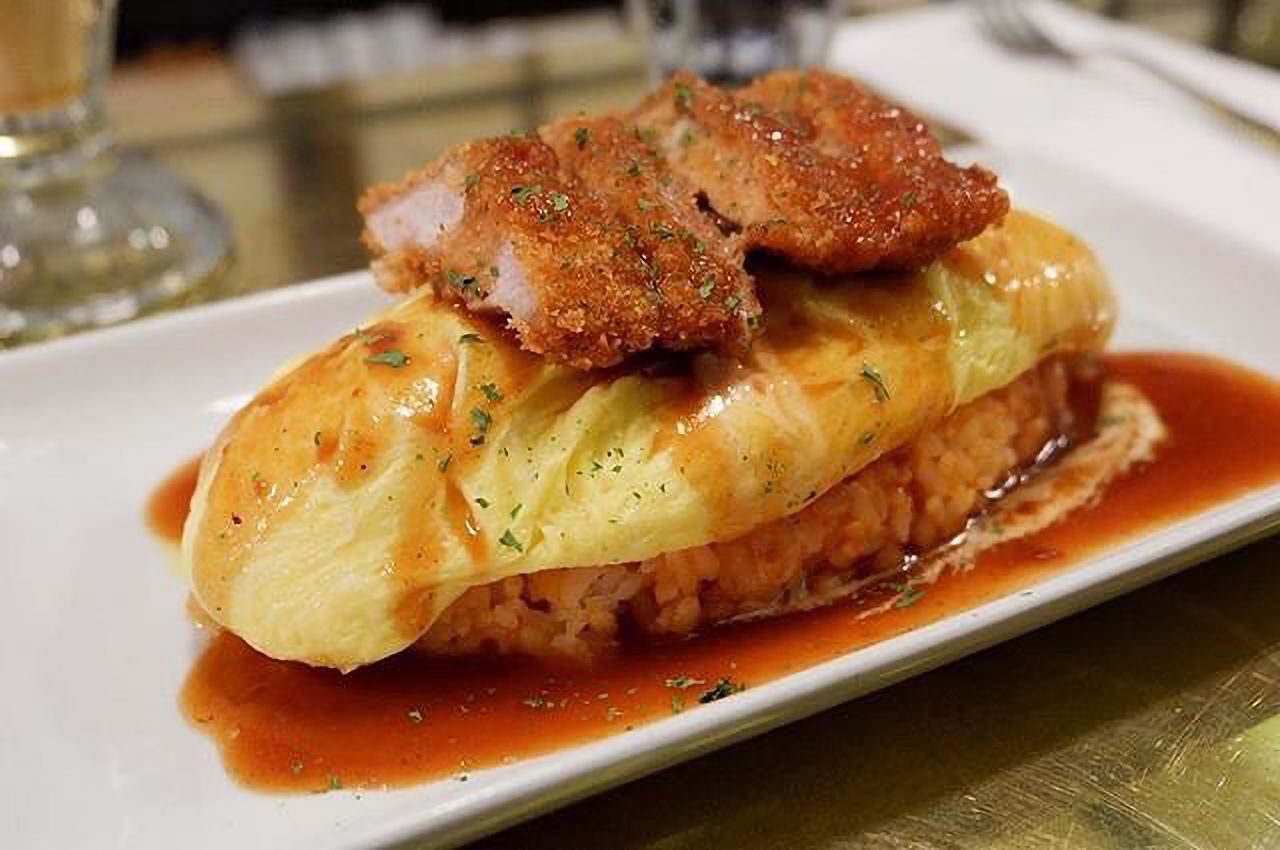 Reminiscent of compact restaurants in Japan that seat only a few people at a time, Hi-Collar is a Japanese restaurant in lower Manhattan that’s a coffeehouse by day and a sake bar by night. Inside the narrow space, you’ll find 13 stools underneath a long golden table facing shoji screens and shelved glasses, teas, and liquor. In 2020, Hi-Collar moved to make it easier than ever to order for outdoor dining or to-go eating. The daytime food menu consists of six entrees, but you’ll want to try the omurice — rice with tomato sauce that’s covered by a fluffy omelet. The western-influenced omurice is a popular breakfast food in Japan though it can be eaten at any time. You can get different sauces like the original, cream, or demi-glace, as well as toppings like cheese and sausages. It’s pretty popular on weekends, though, so show up a little before opening or go on a weekday.

3. The Flame Diner in Midtown, Manhattan 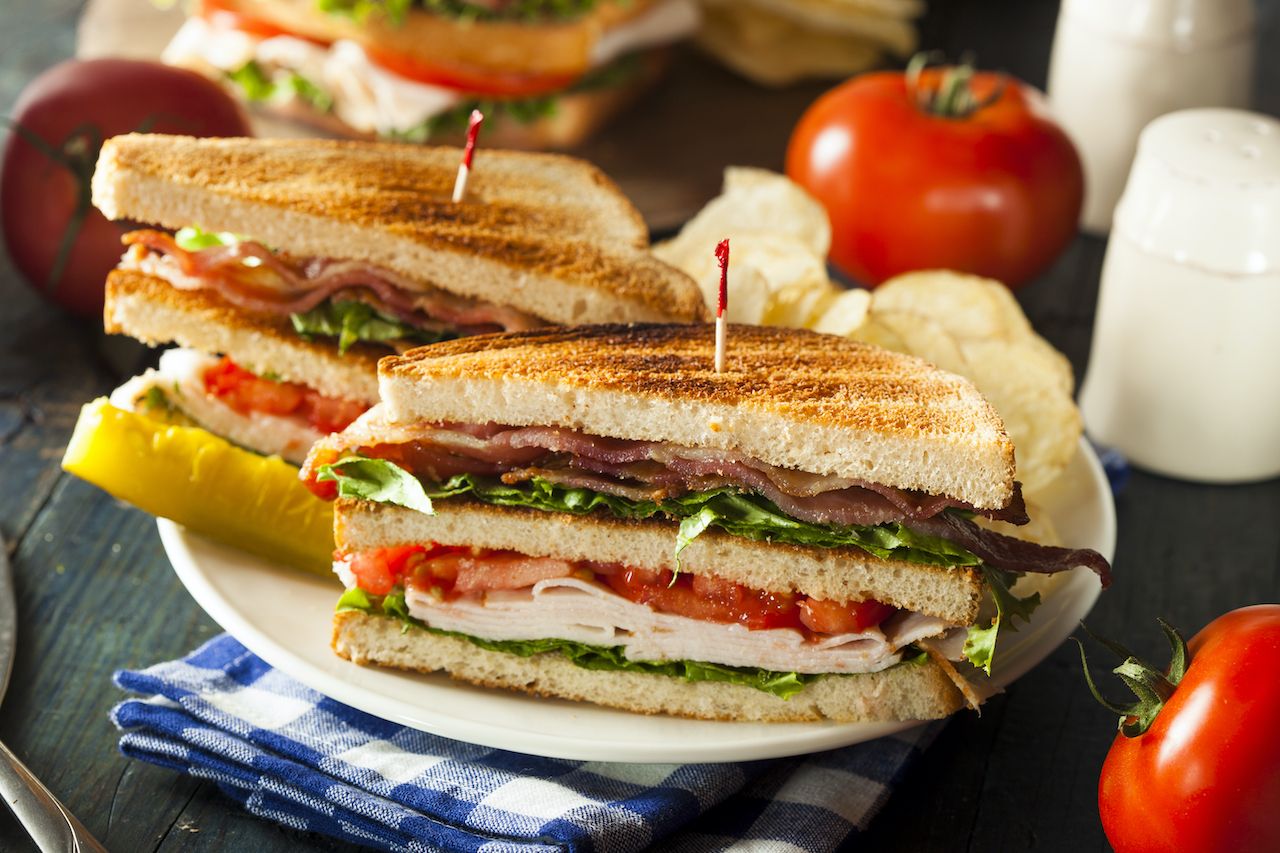 The Flame is a typical American diner with no frills or fuss. It’s a local favorite near the top of Midtown Manhattan by Central Park and Columbus Circle for both the college students that surround the area and the local community. The Greek-owned and -operated establishment is open 24 hours, rain or shine, so you can satisfy a craving at any point, whether you want breakfast for lunch, for dinner, or, well, for breakfast. The breakfast menu is extensive, but we recommend ordering the Oreo-cookie pancakes. You only get three pancakes per serving, but you’ll be lucky if you can finish. If you’re feeling optimistic about the depths of your stomach, add a scoop of ice cream for an additional $4. 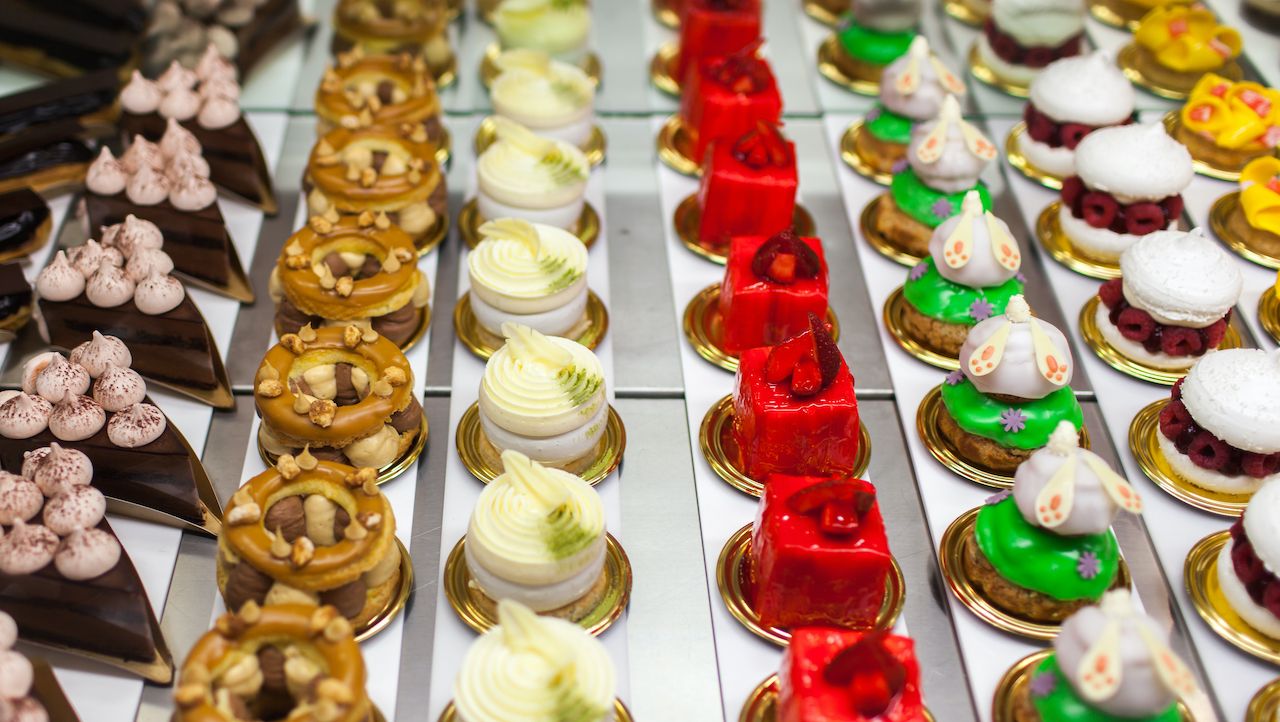 Probably best known as the creator of the cronut, a croissant-doughnut hybrid, Dominique Ansel opened up his first bakery in Soho in 2011. Since that first Manhattan spot, locations have spawned in other parts of NYC, as well as Los Angeles, London, and Tokyo. It’s so famous that sometimes, while opening isn’t officially until 8:00 AM, a line forms at Dominique Ansel Bakery at least an hour earlier. The bakery has had to limit purchases to two cronuts per person (which cost $6 a pop). Weekends tend to be busier, so arriving on a weekday morning before you officially start the day may be your best bet. If waiting doesn’t appeal to you, DAB also serves up egg sandwiches and other pastries that you can grab on the go for a quick breakfast. 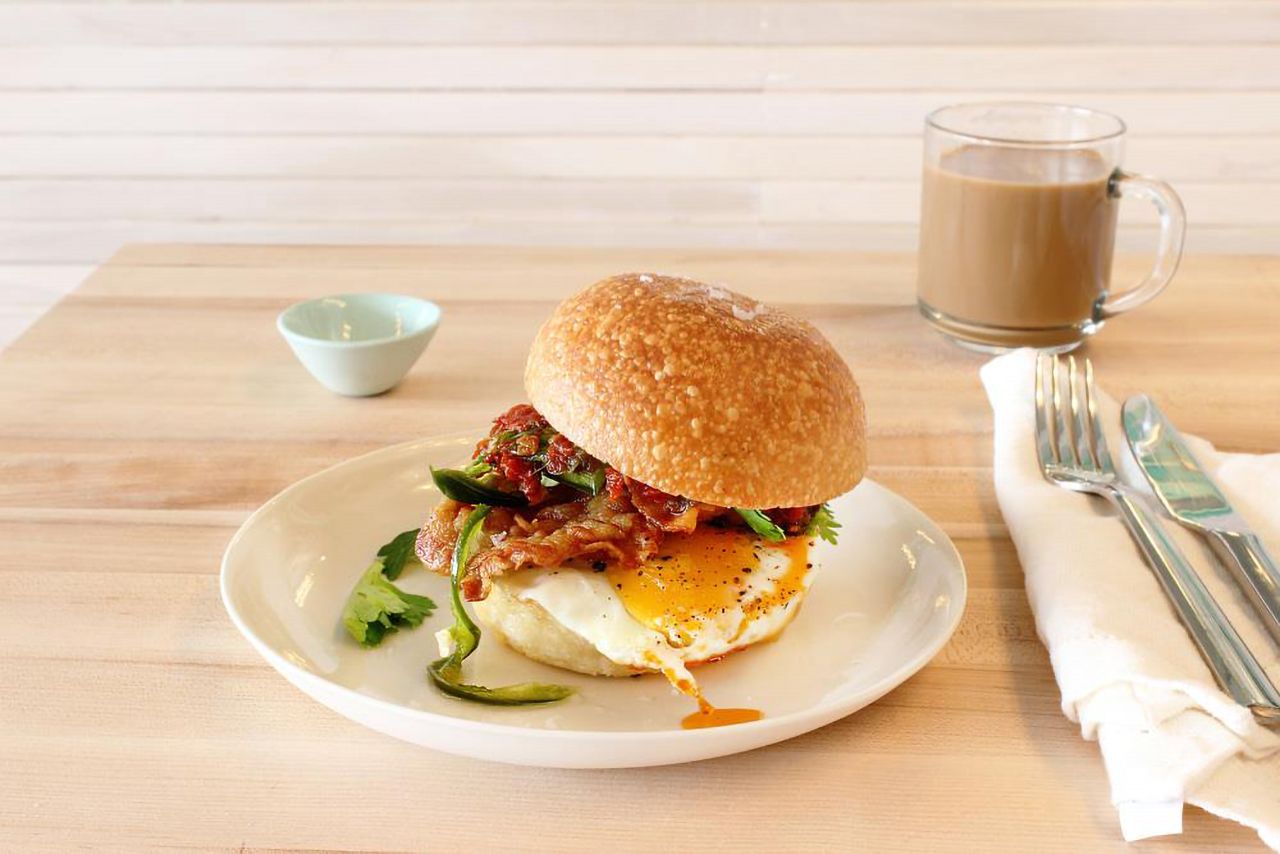 The original Manhattan location of the Egg Shop in SoHo is worth the wait, but if you can, try to get a reservation. Created by wife and husband duo Sarah Schneider and Demetri Makoulis in conjunction with chef Nick Korbee, the Egg Shop turns a simple egg into so much more, showing off its versatility. Once you make it past the door, what awaits you is a myriad of egg-centric dishes, so you’d better be an egghead. New Yorkers love their “baconeggandcheese” sandwiches — we say it so fast, it sounds like one word — so you can’t go wrong with Egg Shop’s B.E.C or El Camino, which is a poached egg, avocado, pulled-pork carnitas, homemade black-bean salsa, shaved red cabbage, and cilantro, all on a fried tortilla. If you’re in Brooklyn, there’s also an Egg Shop location in Williamsburg near Brooklyn Brewery.

6. Moss Café in Riverdale, the Bronx 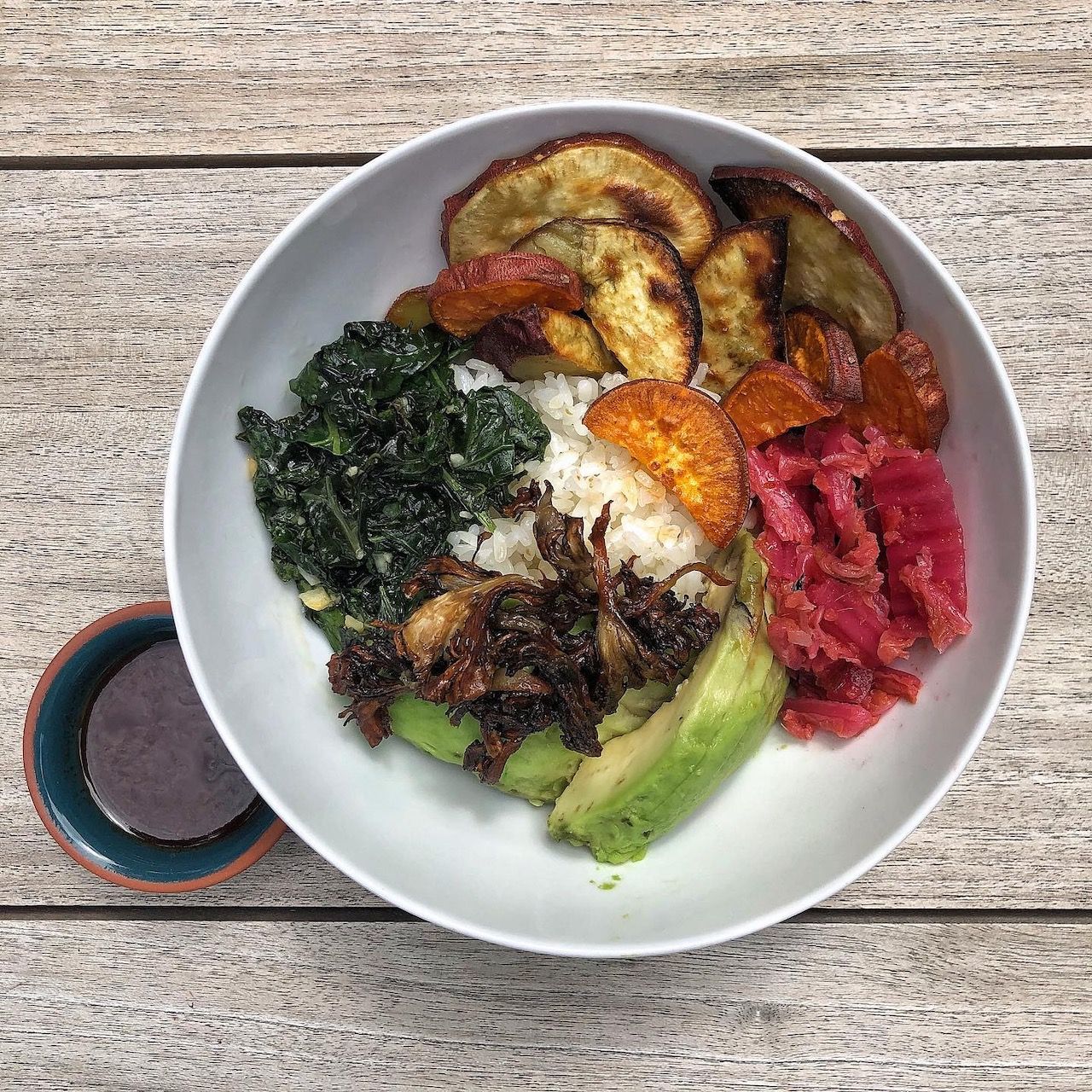 Moss Café is a Kosher, vegetarian, farm-to-table cafe, restaurant, and espresso bar in the Riverdale area of the Bronx. By using locally sourced ingredients, it aims to provide customers with fresh, high-quality food. Hearty and healthy is the method to the madness here. We recommend the farmer’s-market-scramble dish, which consists of three scrambled eggs with roasted asparagus, maitake mushrooms, chives, and freshly made polenta bread or the shakshuka, a Moroccan spiced stew with roasted tomatoes, dried lime, cubanelle peppers, two eggs, feta, and sourdough toast. Even simple avocado toast is done up and presented in a new, creative way, so you can’t go wrong with anything you pick. 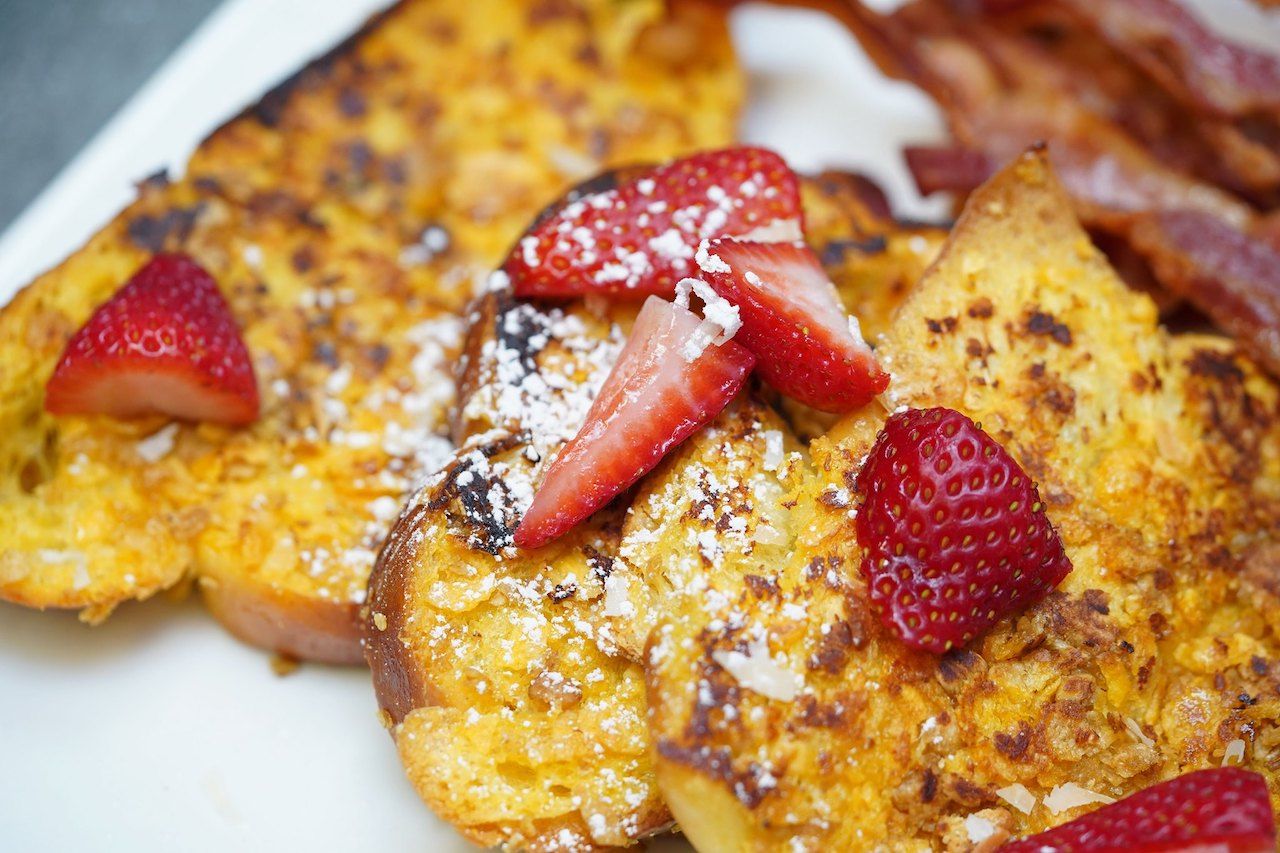 For typical American food with a Latin twist, visit Jimmy’s Grand Cafe in the Union Port neighborhood of the South Bronx. The outside may deceive onlookers who might mistake it for a restaurant-nightclub hybrid. While that may be true of Jimmy’s on weekend nights, during the daytime it’s where you can get French toast dipped in coquito (an alcoholic Puerto Rican drink similar to eggnog) or a Dominican breakfast of mangu (mashed plantains), eggs, fried salami, and tostones (fried plantains). 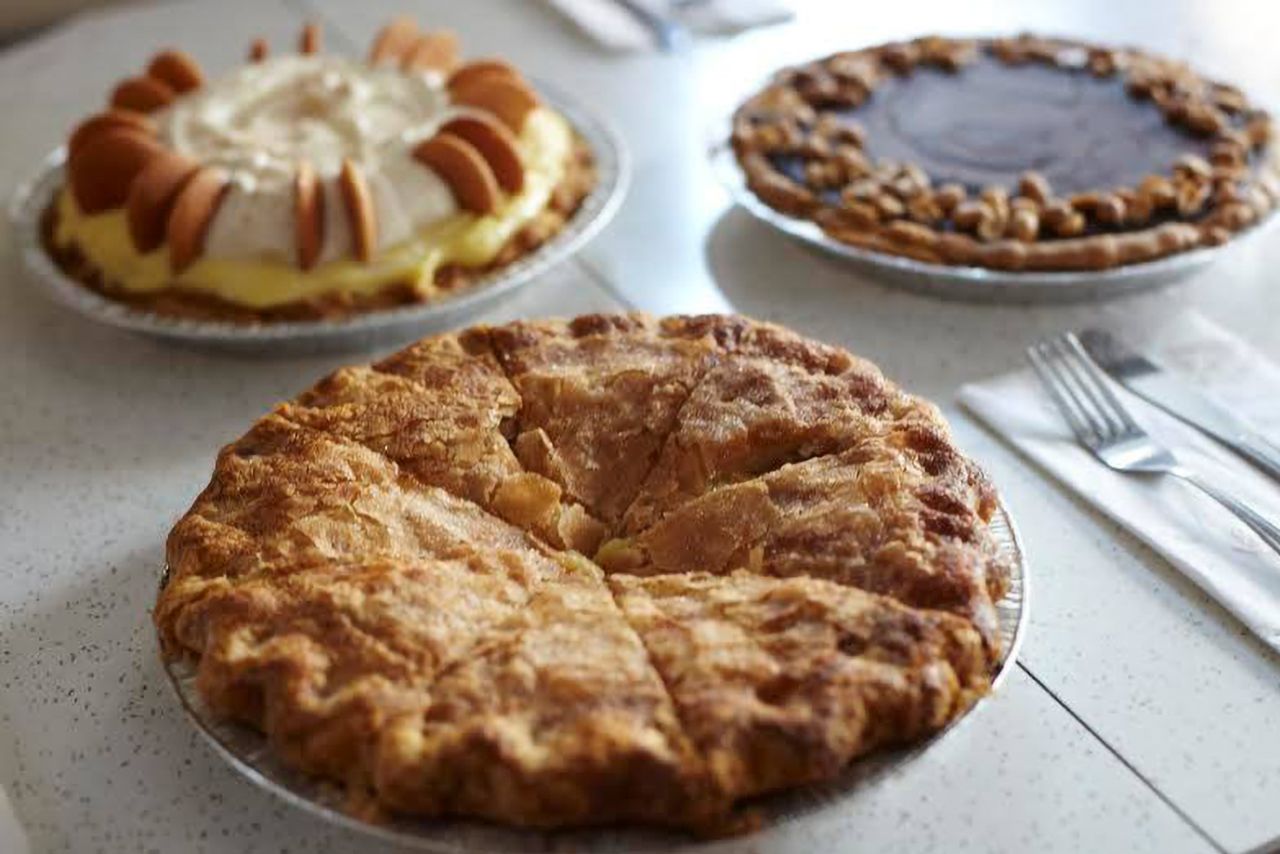 If you’re hankering for homestyle Southern comfort food, look no further than Pies ‘n’ Thighs in Williamsburg, Brooklyn. Everything here is mouth-wateringly delicious, but the buttermilk biscuits take the cake. Warm, fresh, and fluffy, the biscuits are filling on their own, but you can also get them with a side of cream cheese and jam or gravy, or as a sandwich base with chicken, egg, and cheese, or sausage cozied up in the middle. 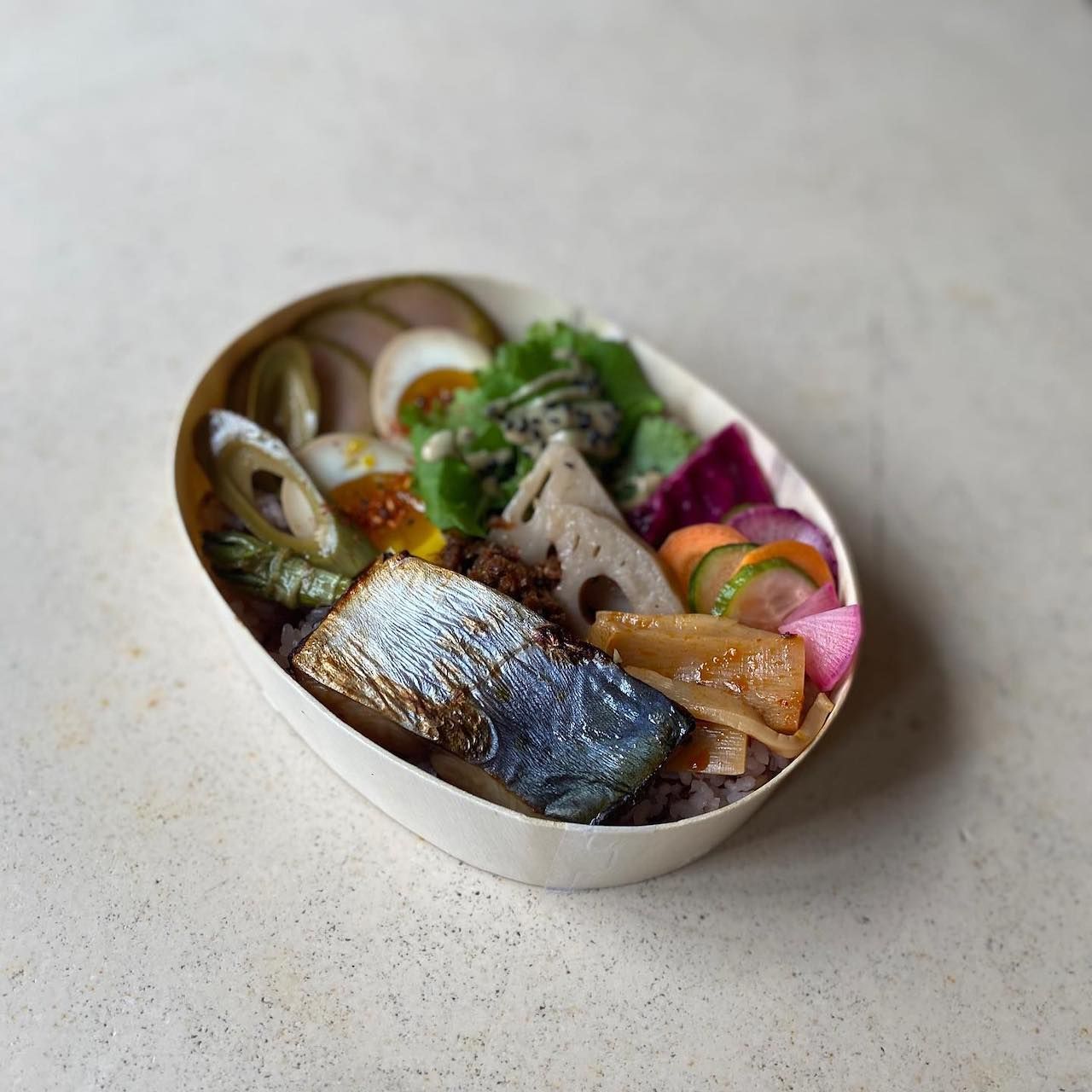 There’s no set menu at Okonomi, a Japanese-style eatery in Williamsburg, Brooklyn. Meals are served as ichiju sansai, which literally translates to “one soup, three dishes” and is meant to promote the importance of a balanced diet. Many prefer to begin their day with ichiju sansai so as to have a healthy and productive start to the day. Rice is served with miso soup, roasted fish, vegetables, and an egg, with all food being cooked in hot water or roasted without any oil and butter. Everyone gets the same food with the only difference being in how the fish is cooked. You can choose from one of four ways: shio yaki (salt-roasted), saikyo miso (sweet miso), sake kasu (sake lees), and kombu jime (dry kelp cured). 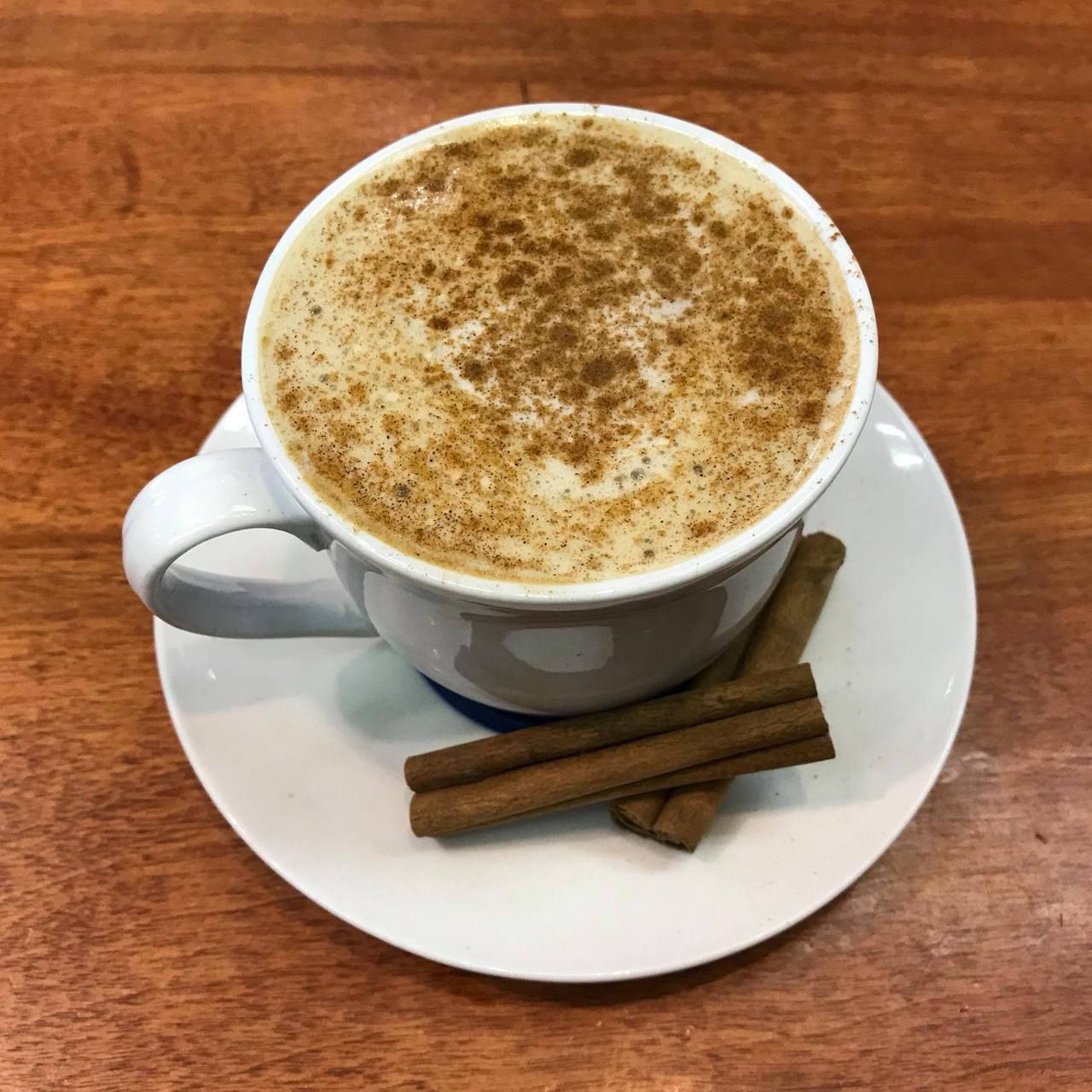 Doubling as a cafe and used bookstore where visitors can peruse old vinyl records and local art, everything really does go at Everything Goes Book Cafe in the Tompkinsville neighborhood of Staten Island. While reading about the adventures of the Great Detective, you could chow down on a Hum-dinger sandwich, a bagel with hummus and cream cheese, or a Monkey Pie. For vegans, or if you’re feeling particularly health-conscious, try an Itiji bowl with brown rice, scallions, carrots, kale, and cabbage.

11. J’s on the Bay in Rosebank, Staten Island 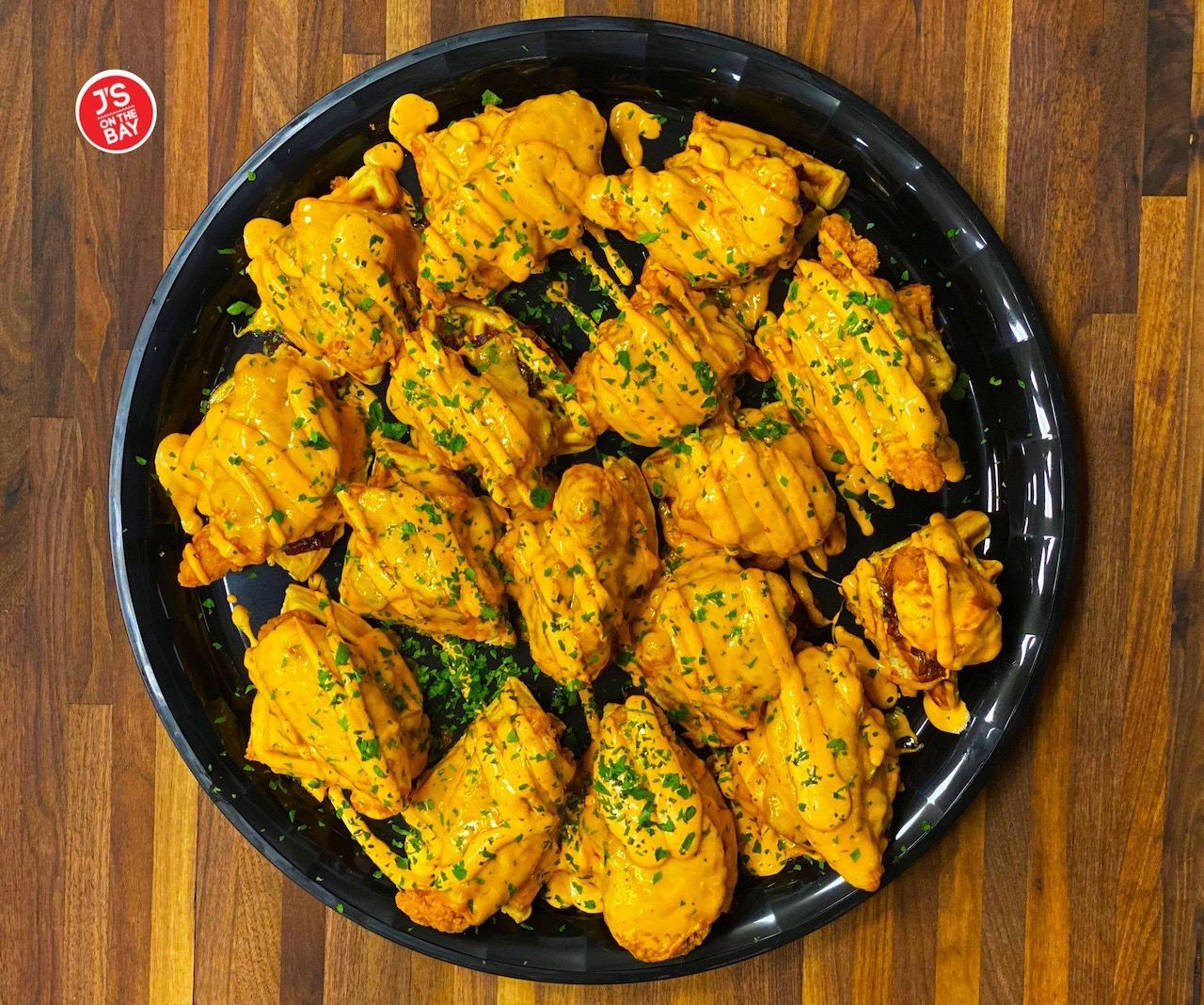 Photo: J’s On The Bay/Facebook

Sure, you could get chicken and waffles at many places in New York City, but you should get them at J’s on the Bay. Here, you’ll get the dish with a twist — like drunken chicken parmesan waffles with cherry tomatoes, smoked mozzarella, garlic chips, crispy chicken, and vodka sauce or J’s chicken and waffles with cheddar cheese, fried chicken, caramelized bacon-onion jam, and chipotle aioli. Other hearty dishes include French batter croissants covered with Nutella mascarpone or a chocolate-peanut-butter waffle. Make sure to come hungry because you’re going to want to have every last bite. 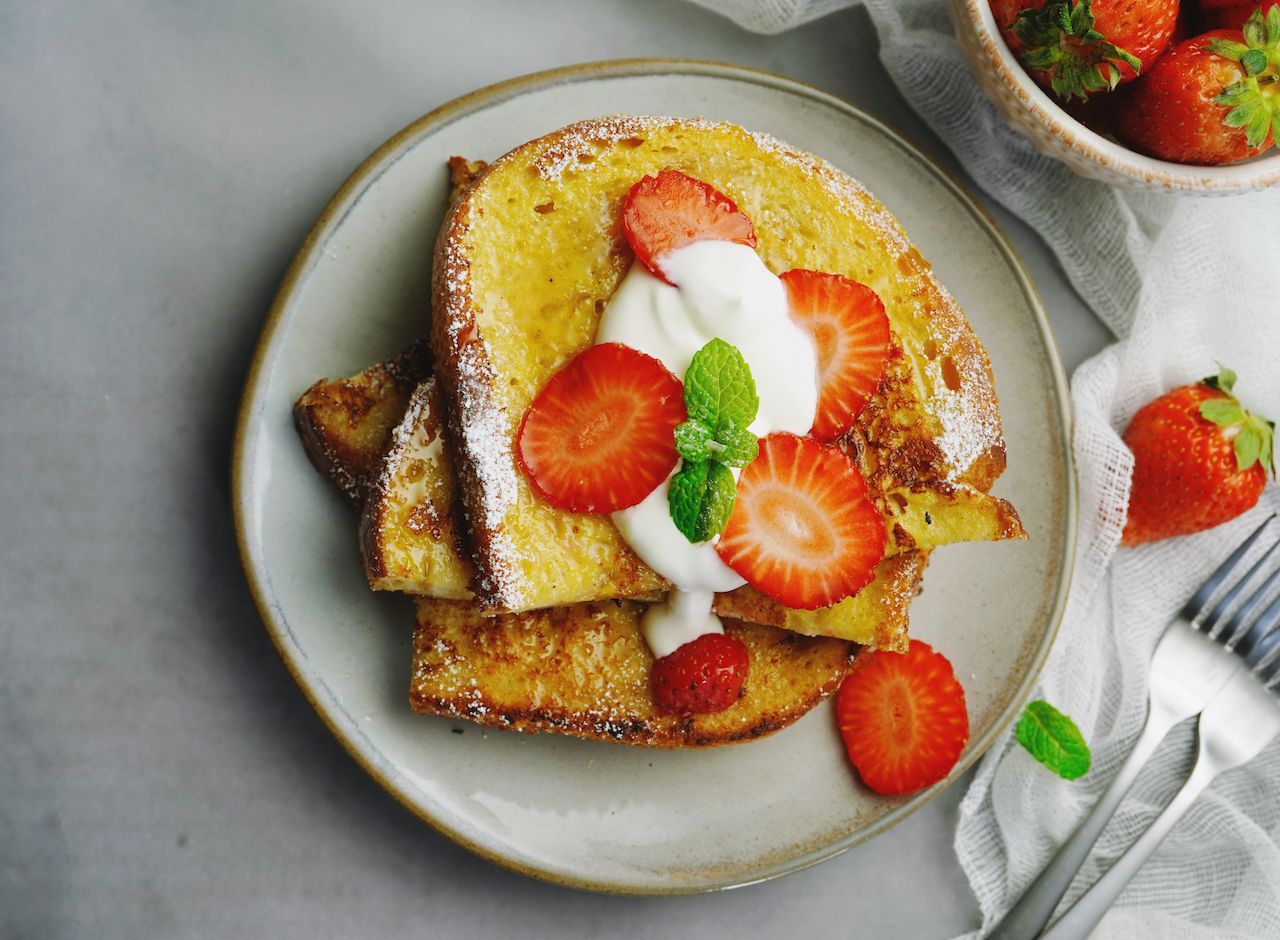 Bayou is Cajun-style through and through, from the name itself to the decor to the food on the menu. It serves typical Southern fare inspired by the French Quarter in New Orleans, but you’ll want to try the savory crepes and egg platters. There’s the Voodoo Crepe filled with parmesan cheese, baby spinach, garbanzo, and scrambled eggs, as well as the Streetcar Crepe with bacon and fried eggs and cheddar and jack cheeses. But if you’re looking for something sweet, there’s the Bourbon Street French Toast, topped with strawberries, pecans, and Creme Fraiche. For some entertainment, visit during the weekends when there’s live music playing from opening to the end of brunch. 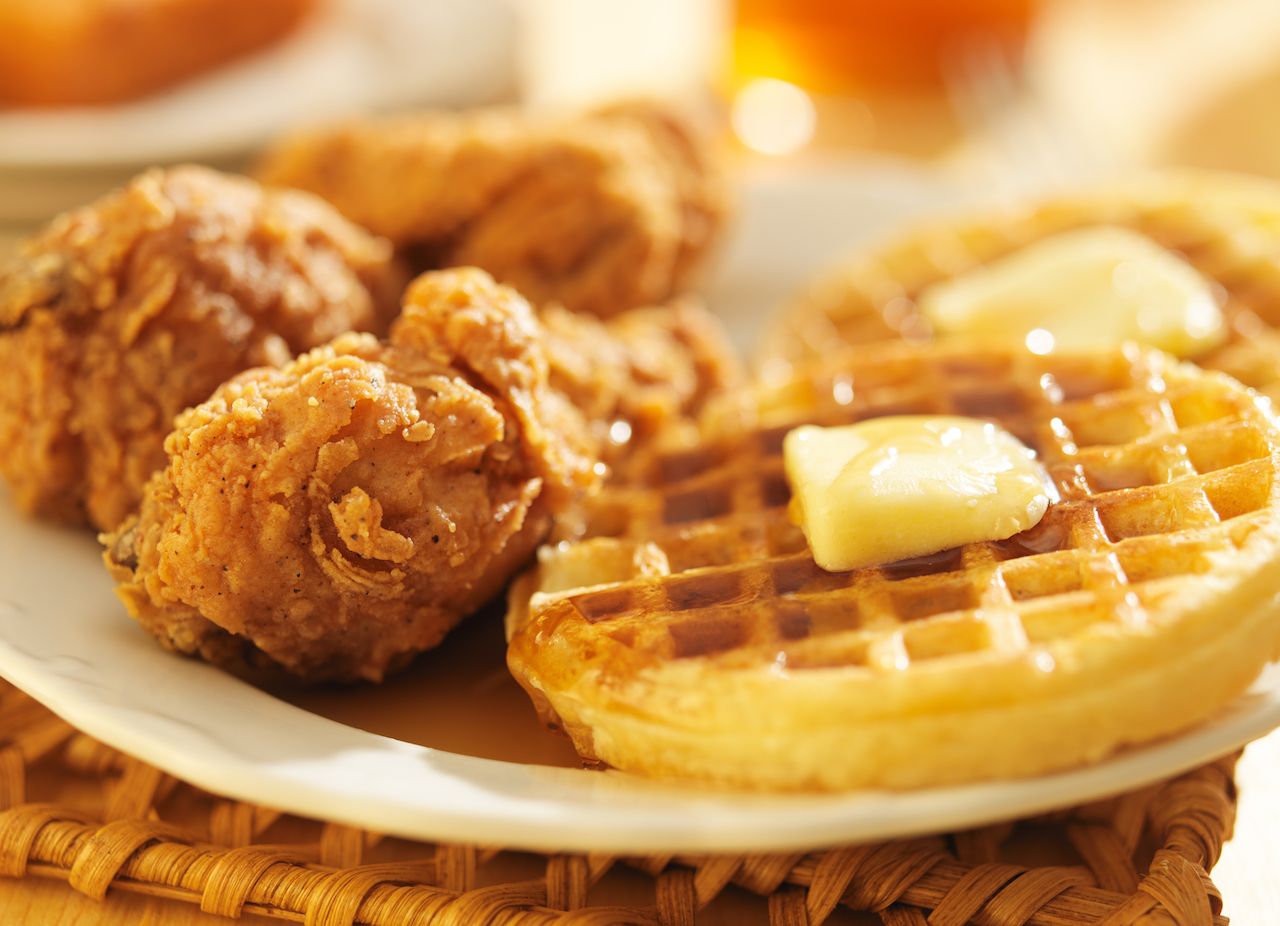 A soul food haven — maybe even heaven — the motto at Vibes is “come and feel the vibes.” The food is reasonably priced and appetizing, and the staff is happy and helpful. For breakfast, bring a bit of surf to your coop with shrimp omelets or go for the fried lobster chicken and waffles.

14. The Panorama of My Silence-Heart in Jamaica Hills, Queens 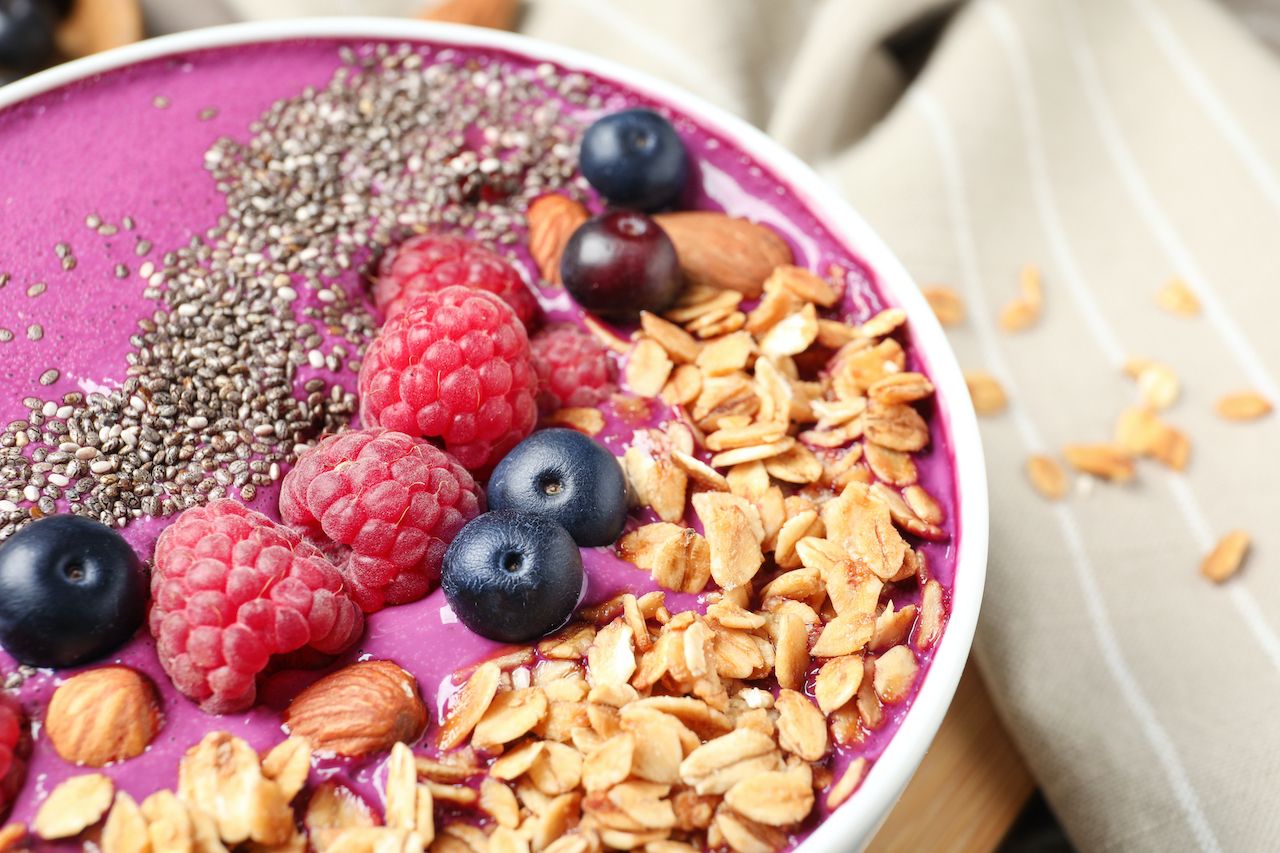 Also known as Panorama Café, Panorama of My Silence-Heart is an artsy cafe full of positive energy. The venue is inspired by the philosophy of Sri Chinmoy, a spiritual teacher, poet, and composer, and it’s actually run by some of his students. You don’t have to feel guilty about indulging here as the menu is chock-full of healthy options. Healthy and tasty, choices like the acai-piña-colada bowl, quinoa-black-bean burger sandwich, Thai iced tea, and goji-cacao balls surely won’t disappoint. 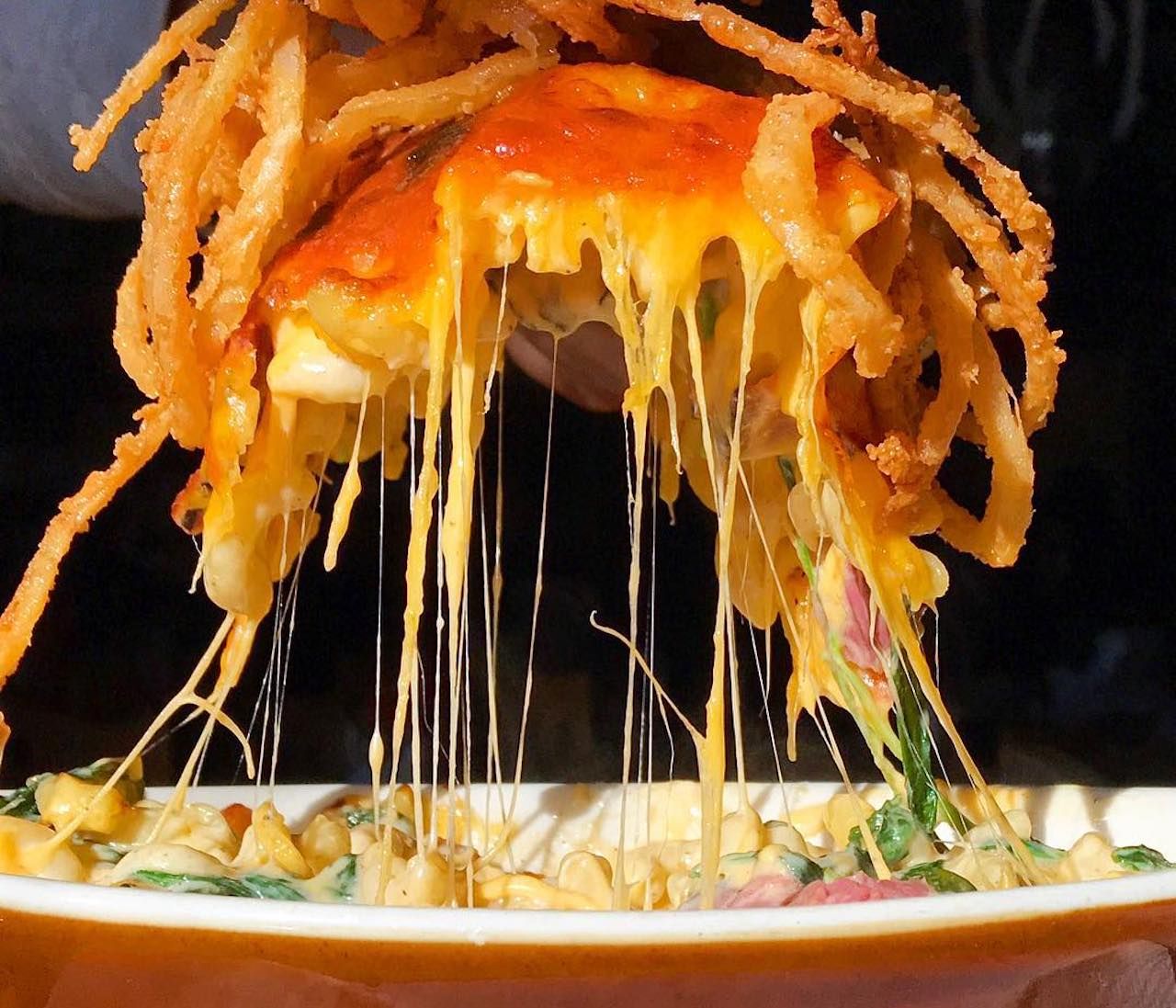 The nostalgic venue of Queen’s Comfort draws in customers via its inner child. The decor will instantly bring up childhood memories, from the bust of Ronald McDonald to Batman figurines in original costume. The menu boasts over 50 items, and many of them will give you a sugar rush or the best stomachache of your life. Think Cinnamon Toast Crunch-crusted French toast, Cap’n Crunch-crusted chicken (or tofu) sandwiches, and deep-fried mac and cheese and burgers for people who want a savory brunch. Get comfortable, bring cash, and enjoy your blast from the past.

A version of this article was previously published on August 24, 2018, and was updated on November 2, 2020, with more information.