Dubbed the Diner Capital of the World, New Jersey has more diners than any other state. And because it’s also one of the most diverse states in the country, many of these establishments feature dishes from Italian, Greek, Mexican, and other cuisines. It’s difficult to know how many diners are in the state — by some accounts, there are more than 500 — but it’s more clear why New Jersey is such a hot spot for diners.

The automobile industry started to grow in the early 20th century, and as a result, commuters increasingly traveled by car. The route connecting New York and Philadelphia at the time passed through New Jersey. As drivers sped along, they needed places to eat, making roadside diners an important component of travel infrastructure. With bigger roads and better access came new factories, which brought new workers. Those workers were often immigrants who needed filling and affordable food that they could buy at whatever time of day their shifts permitted. Diners met that demand by catering to worker tastes and schedules, sometimes dishing out plates around the clock.

A large percentage of diners were, and still are, run by Greek families. Many Greek immigrants came to the United States in the early 20th century and worked in restaurants as waiters, busboys, and cooks. They then opened their own diners, catering to various immigrant communities and serving food that would appeal to Italian, Greek, and other European workers. As more people of different backgrounds arrived, diners expanded their menus to add dishes from Mexico and parts of Asia.

Shifting tastes in music, style, and décor over the years influenced diner design as if the history of the era each diner was built was painted on its walls with bright neon signs. Years went by, but diners stayed the same. Some have operated for more than 70 years and are still going today. From Hackensack to Wildwood and Clifton to Cape May, you can eat your way through the Garden State one diner at a time and no two will look or taste the same. And while you’d need a couple of years to sample every one of them, here are the top 10 you don’t want to miss. 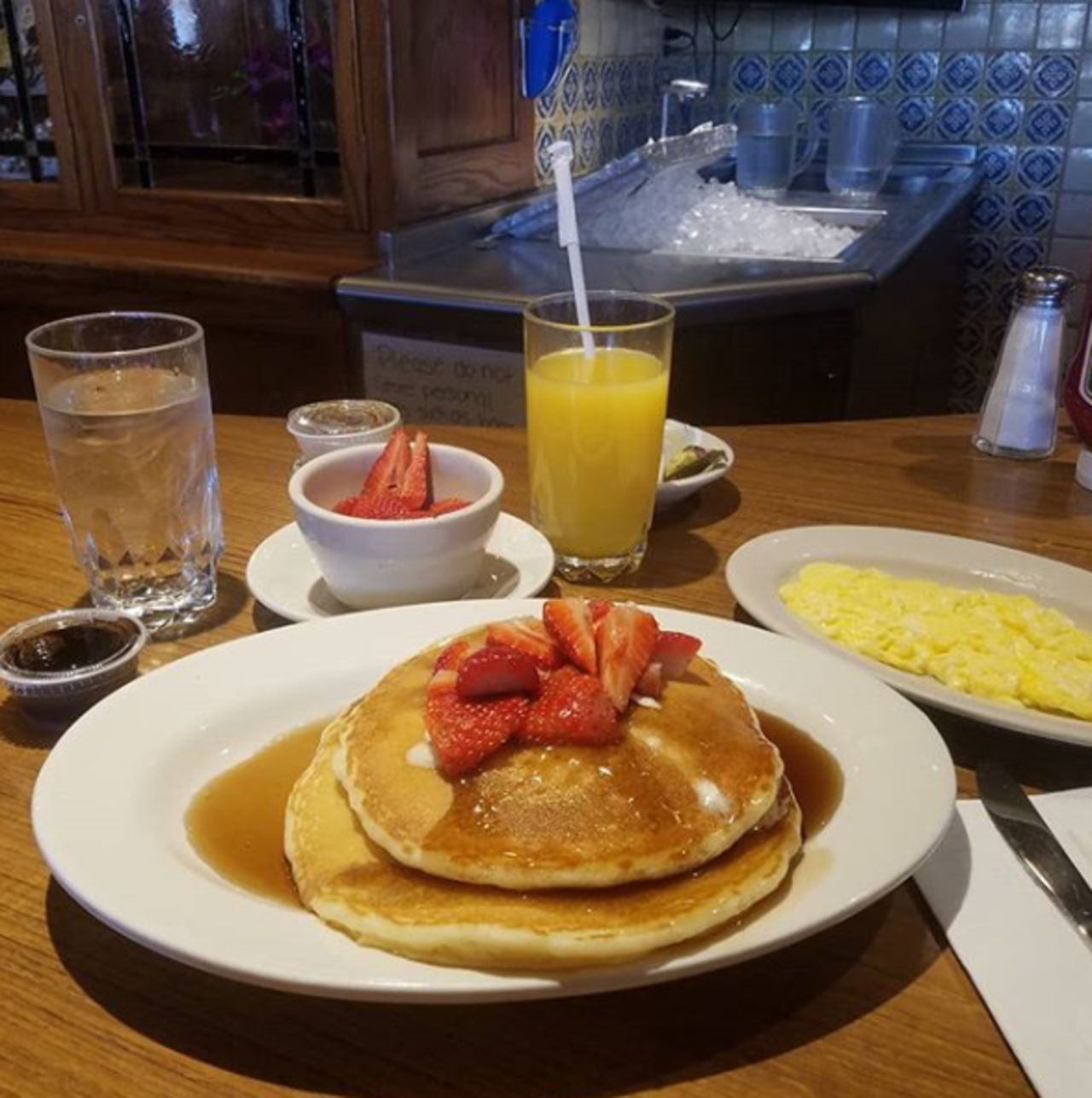 Coach House Diner is a testament to the sentiment that breakfast is the most important meal of the day. Here, you’ll find the portions generous and filling. The French toast is tender, the waffles are crunchy, the pancakes and omelets are fluffy, and there’s a bevy of breakfast sandwiches for every taste. If you’re around on a weekend, Coach House Diner is a perfect place to indulge in a hearty Saturday morning breakfast before heading to the Garden State Plaza Mall or the Shops at Riverside. And if you can’t make it there in the AM, the lunch and dinner menus are enormous, and there’s a full bar to quench your thirst. It’s open 24 hours, so swing by any time.

Where: 55 NJ-4, Hackensack, NJ 07601
What to order: French toast with fresh berries and a milkshake 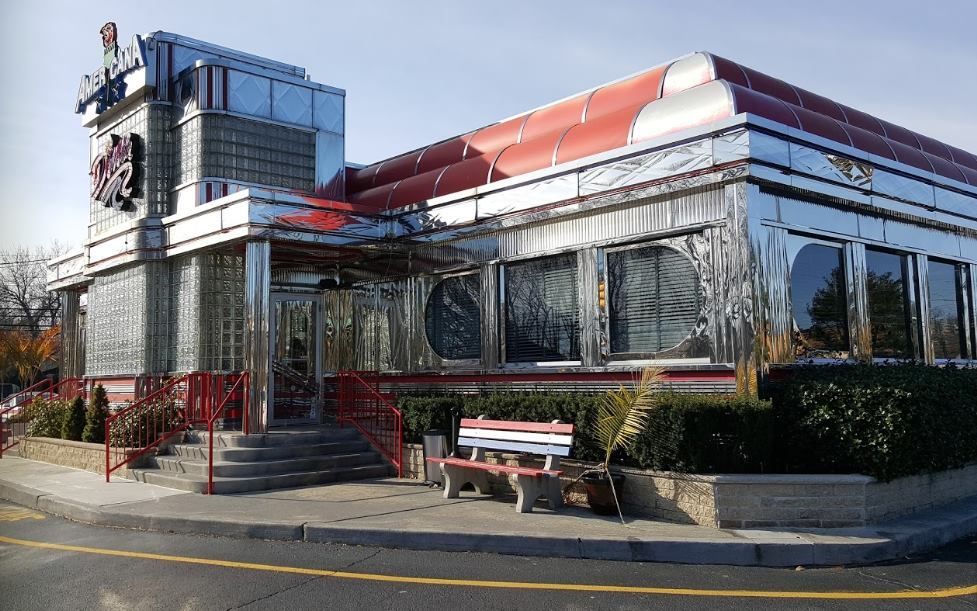 Americana Diner is immediately recognizable by the bright neon signs and big glass block vestibule. It has a Greek-inspired menu with Italian infusions, plus plenty of other types of dishes that will satisfy every patron. The Helenic sampler platter of feta cheese, tomato, and grape leaves is a great starter, especially for a group of hungry guests, while a succulent beef or chicken gyro makes for a satisfying entrée. There’s also a section on the menu for Italian specialties, and there’s a long list of omelets and breakfast options. You’ll also find plenty of broiled choices, including scrod, trout, lobster, steak, and pork and lamb chops. Be sure to save room for dessert — the layer cake and lemon meringue are the best choices.

3. All Seasons Diner in Eatontown 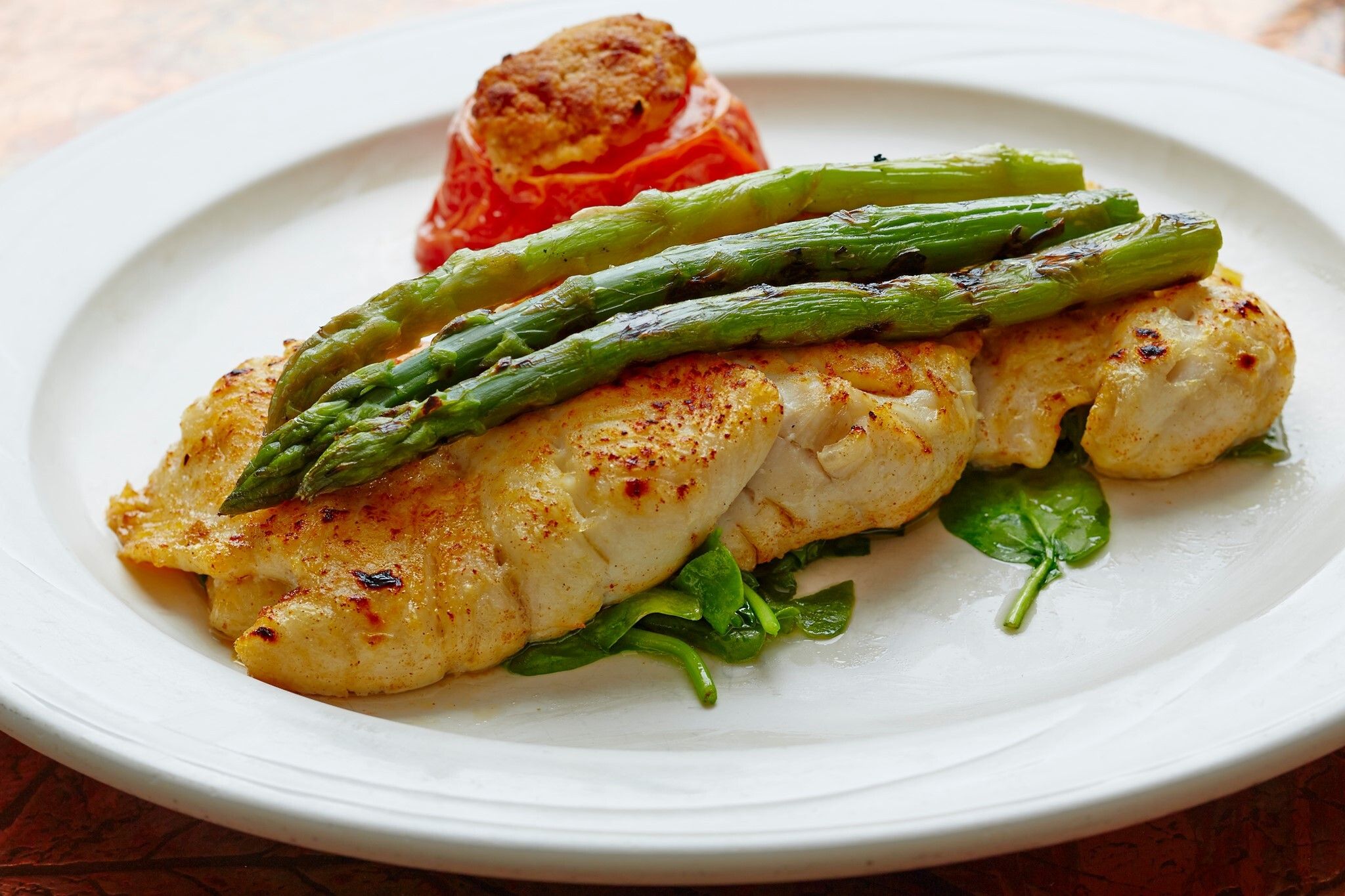 Offering breakfast, dinner, burgers, salads, and a vast collection of sandwiches, All Seasons Diner serves fresh food and bakes everything in house. It has an expansive menu of various omelets, French toasts, fun finger food like pigs-in-a-blanket, and sandwiches that span from wraps to triple-deckers to pita pockets. Entrées get even more tempting when you have to choose between spanakopita, baked ziti, or broiled fish. Save some room for apple turnovers.

4. The Flight Deck Diner in Cape May County Airport 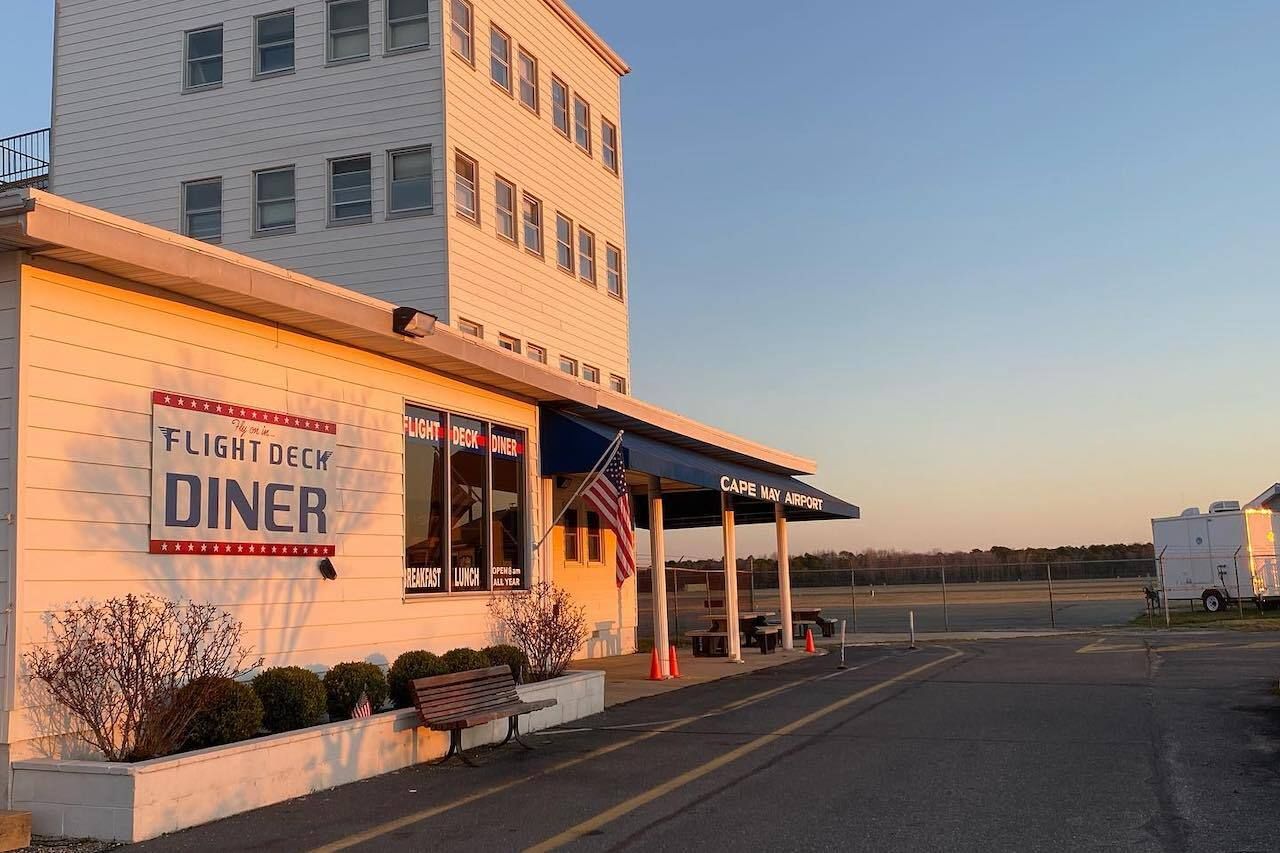 The Flight Deck Diner in the Cape May County Airport doesn’t have a long menu, but the food will make a hungry traveler happy after landing and before takeoff. Breakfast is served all day and includes some irresistible choices like the Hungry Pilot omelet (sausage, bacon, ham, and cheddar cheese), the B-24 Bomber (open-face English muffin with two eggs and sausage gravy), and the B-25 Bomber (open-faced buttermilk biscuit with two eggs and homemade creamed chipped beef). Sides and add-ons are called co-pilots, and there are a dozen to choose from. Not a breakfast person? There are homemade soups and Angus beef burgers to savor. Here’s a little-known fact that only the locals will tell you: Oprah Winfrey uses the airport when she visits Cape May County where her longtime beau, Stedman Graham, was raised.

Where: 505 Terminal Dr, Rio Grande, NJ 08242
What to order: B-24 or B-25 Bombers with co-pilot home fries, plus a hot chocolate with whipped cream from a refueling station 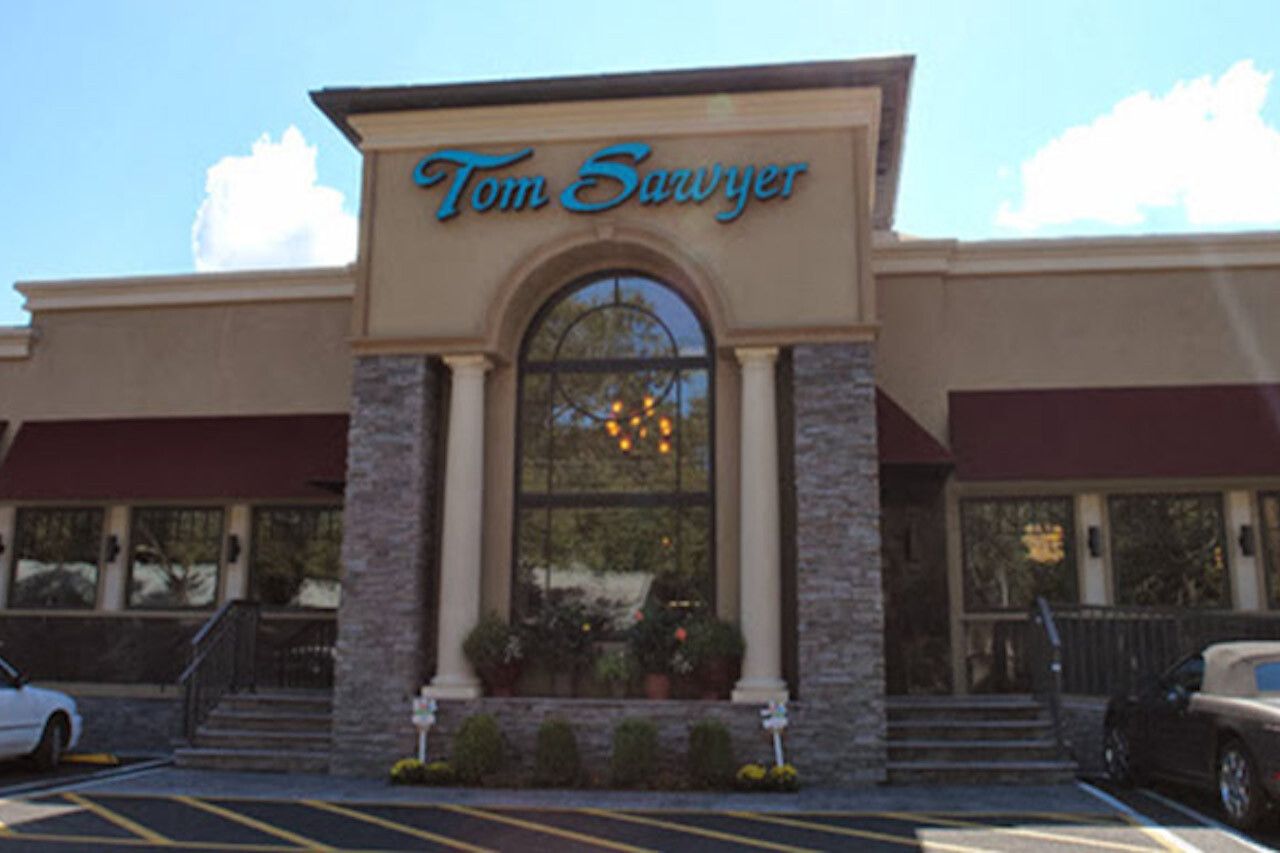 The spacious and friendly Tom Sawyer Diner serves tasty Italian favorites, a few Greek classics, and home-style breakfasts. Here, pastas range from primavera to putanesca, and from alfredo to a la vodka. For entrées, try the Bernando — salmon with prosciutto, mushrooms, asparagus, and mashed potato — or the Aztec turkey burger. The salad section deserves special attention. Mediterranean and Greek salads are very good, but so is the California salad if you like strawberries, melon, and banana mixed with cottage cheese. Breakfast comes fast and cooked perfectly to order. Last but not the least, the milkshakes are delightful, and so are the smoothies.

Where: 98 E Ridgewood Ave, Paramus, NJ 07652
What to order: The Bernando made with salmon, prosciutto, mushrooms, asparagus, and mashed potato. Order it with a peach or mango smoothie 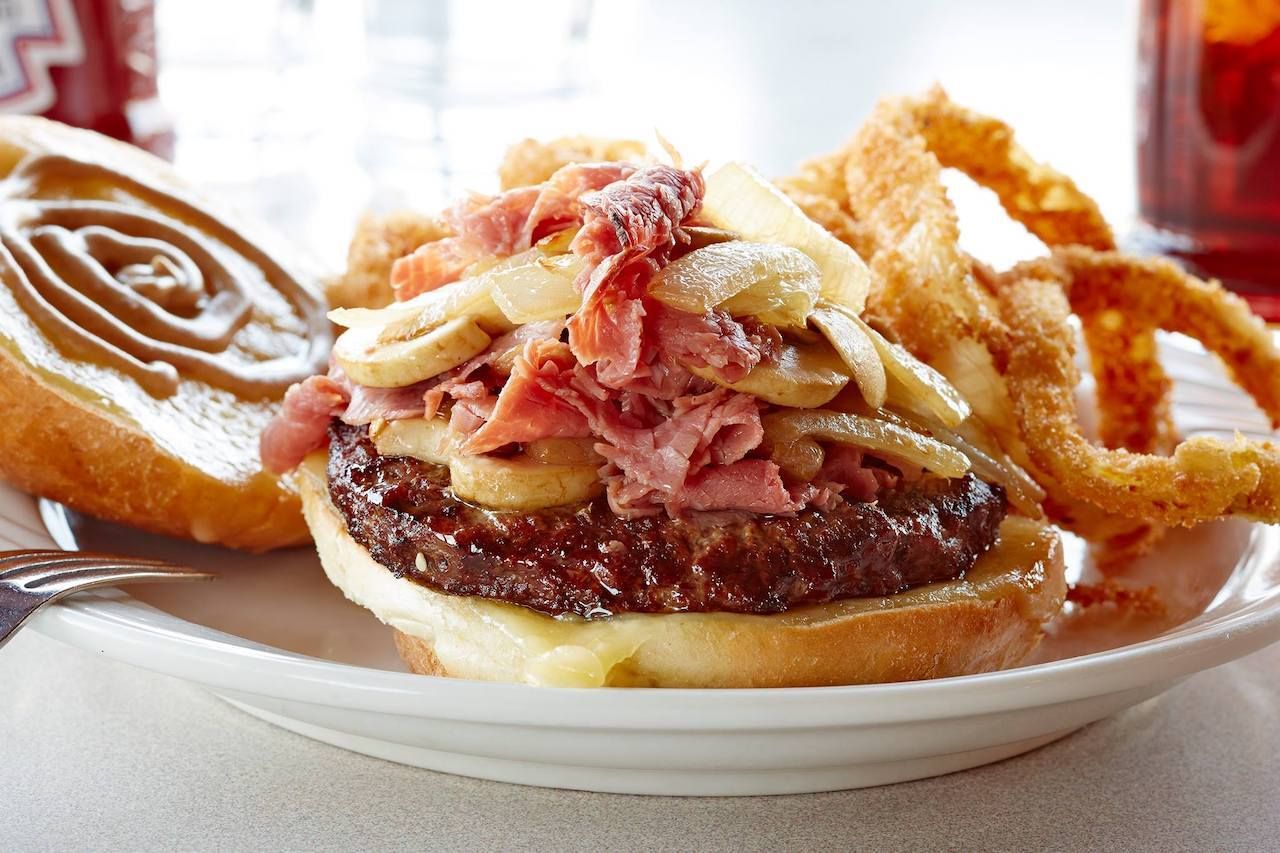 Touted by some as one of the best comfort food restaurants on the shore since it opened in 1974, Blue Swan Diner has a substantial menu of favorites. The menu has a Mediterranean, Mexican, and Italian influence — consider, for example, the grilled calamari followed by ravioli or stuffed shells parmigiana, or linguini with marinara sauce. You can’t go wrong with a Greek salad and lamb chops, or chips and guac as an appetizer with a shrimp jalapeño quesadilla entrée. There’s a good chance your only complaint will be that you don’t have room for dessert, but you can always grab some baklava to go and savor it later.

Where: 2116 State Route 35, Oakhurst, NJ 07755
What to order: Grilled calamari and shrimp jalapeño quesadilla, with an order of baklava 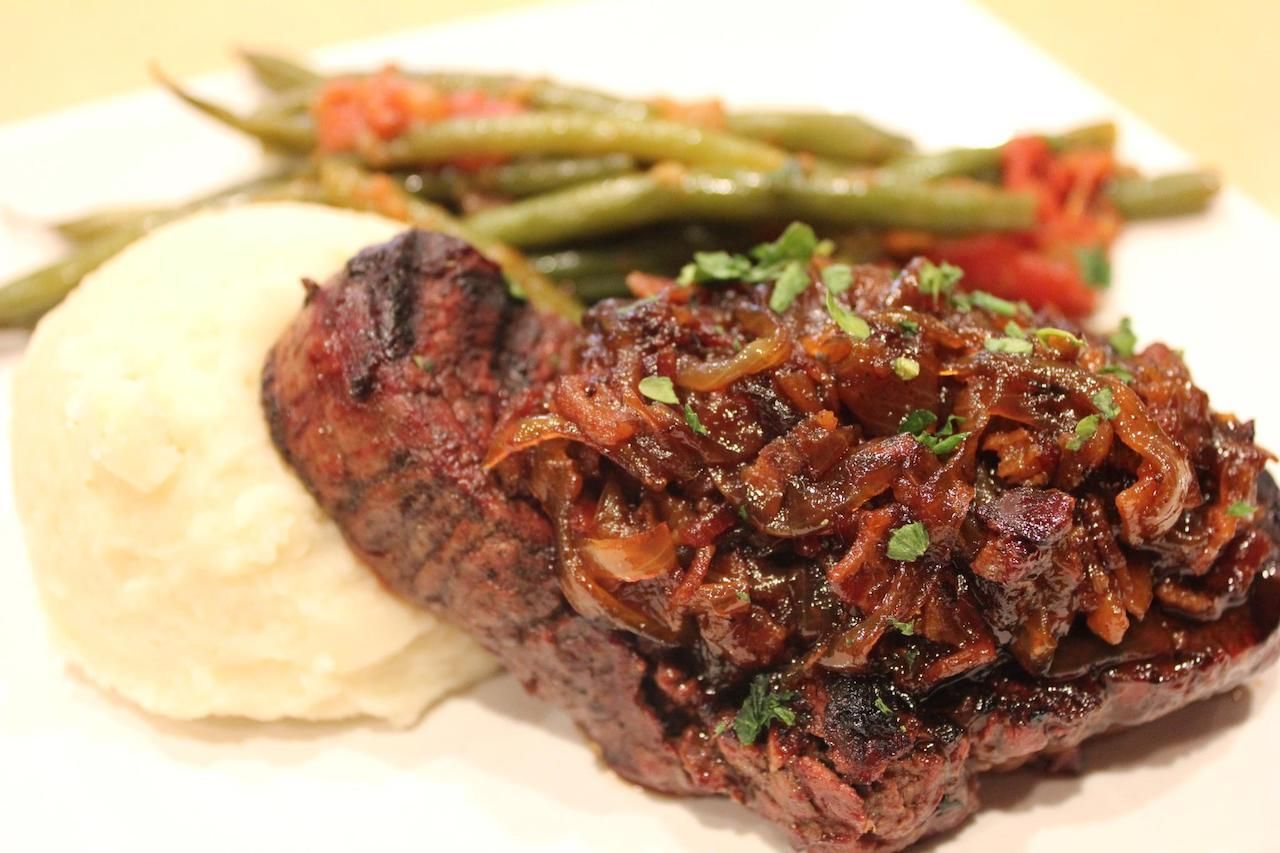 Vincentown Diner is not just another diner. It’s more like an upscale bistro with a family-friendly menu. The diner takes the food quality seriously and serves organic eggs from cage-free hens along with Angus or grass-fed beef, and it uses cooking oils that contain no trans fats. Beers are locally brewed, coffee is freshly ground, and all desserts are made in-house from scratch. There’s even a local wine selection. It’s not every day that you find diners that serve French onion soup with melted cheese on top, bruschetta flatbread, and spinach salad with walnuts, gorgonzola, and fresh strawberries. For a filling dish, try the shrimp pesto pasta or the Vincentown volcano burger, but save some space for the tiramisu and chocolate mousse cake.

Where: 2357 US-206, Southampton Township, NJ 08088
What to order: Bruschetta flatbread and shrimp pesto pasta 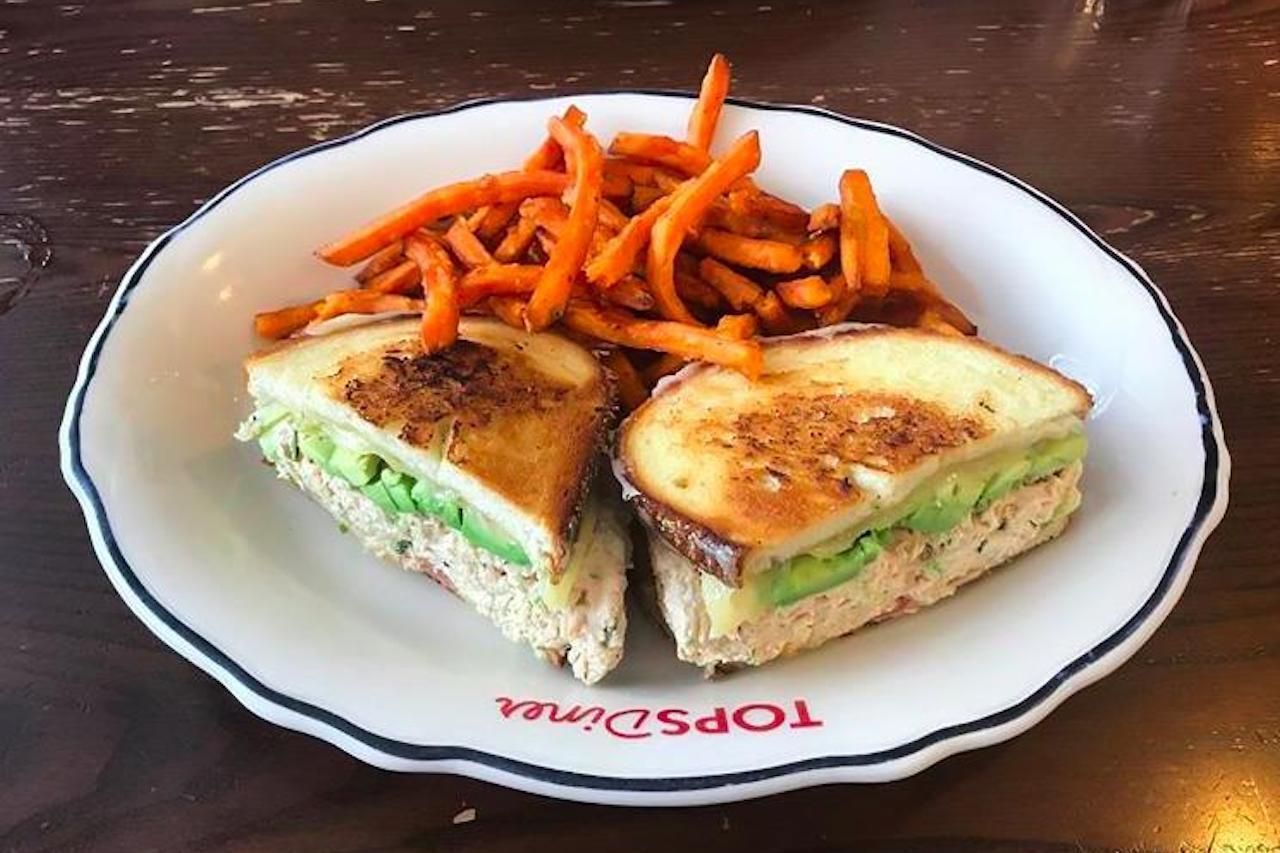 Located in New Jersey’s most populous city, Tops Diner feeds over 15,000 hungry folks weekly and caters to its patrons’ diverse ethnic backgrounds. This shows on the menu. You’ll have to spend some time debating between Navajo chicken penne, Cajun salmon pasta, meatballs with ricotta, the Tijuana burger, or Peruvian stir-fry called lomo saltado. Choosing what to eat becomes even more difficult when you get to the dessert menu and have to decide between guava cheesecake and tres leches cake. You might just have to come again. 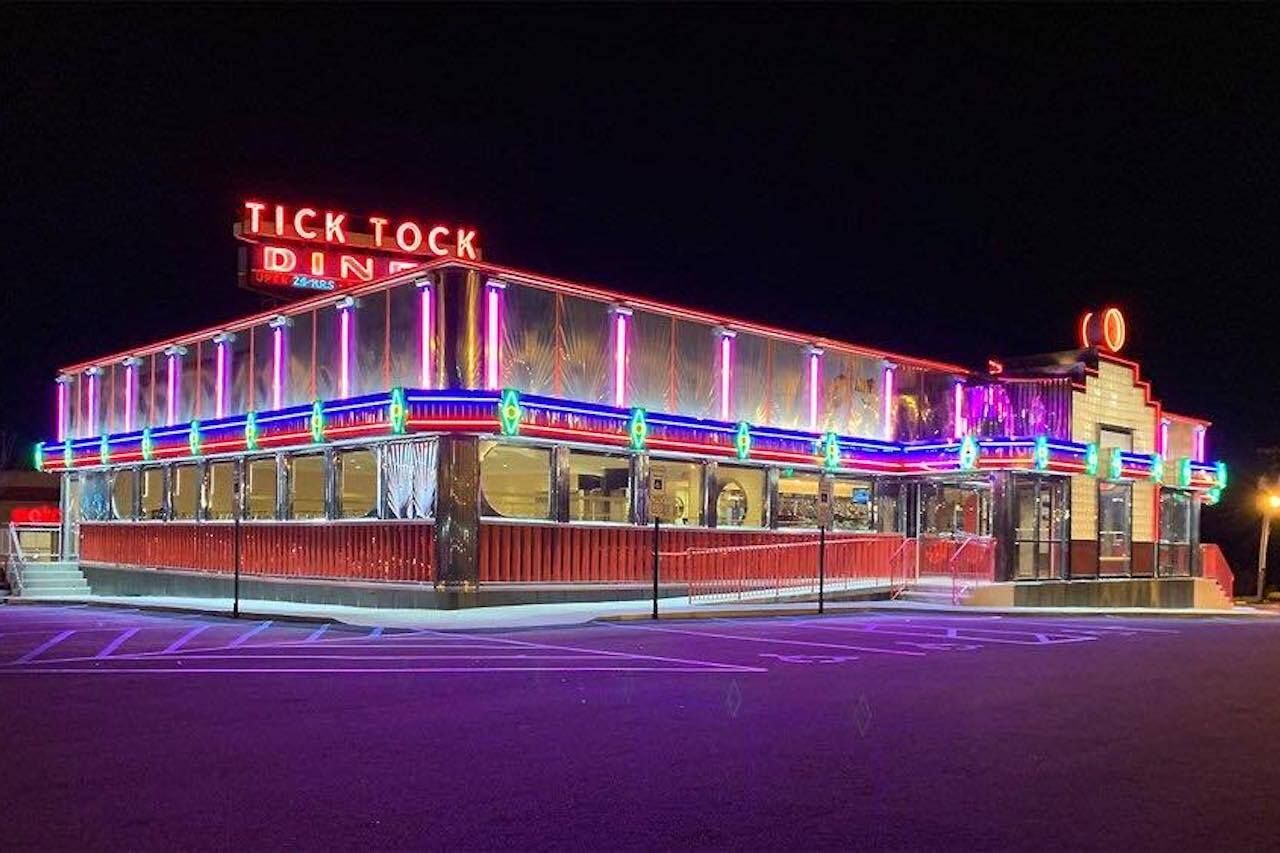 Tick Tock Diner opened in 1948 as a small roadside place and has been greeting people ever since with generous portions and reasonable prices. Like a well-wound watch, Tick Tock never closes, cooking food 24/7, 365 days a year because, well, don’t people need three meals a day, every day? Among the classic burgers, tuna melts, and BLTAs (the “A” stands for avocado), you’ll also spot some daring dishes like General Tso’s crispy cauliflower with yum yum sauce and the Great Balls of Fire made from rolled-up mac and cheese with sriracha dip. A nice selection of wine and whiskey helps wash it all down. During its seven decades of operations, Tick Tock has hosted bar mitzvahs and weddings and fed celebs like Mick Jagger, Jerry Seinfeld, and Chelsea Clinton. It will happily feed you too.

10. The Doo Wop Diner in Wildwood 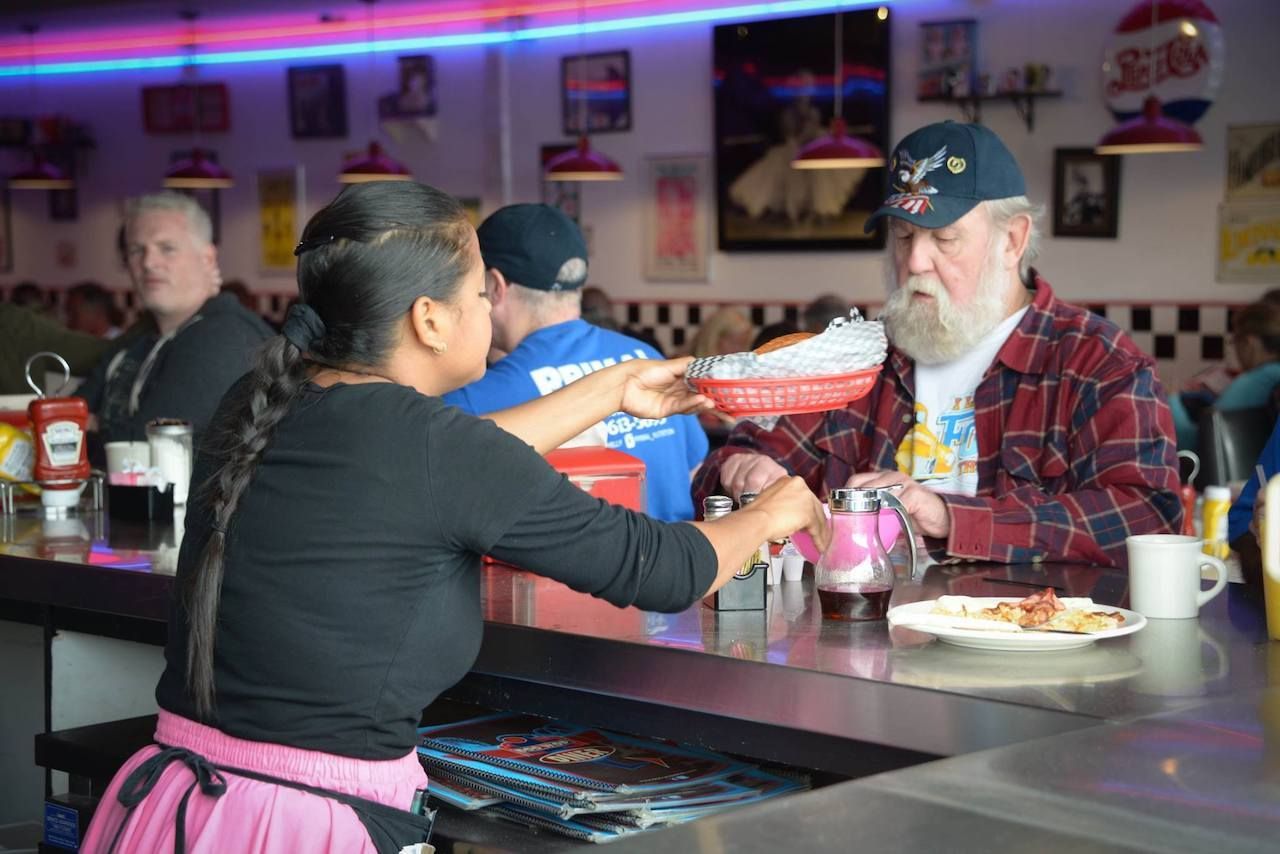 Themed and named after the popular 1950s music and architecture style, The Doo-Wop Diner is located on Wildwood’s boardwalk, aka South Jersey’s summer vacationland. The diner is an attraction in its own right and instantly transports you into the bygone ‘50s in a way that feels so real that you wouldn’t be surprised if Betty Boop’s statue came alive to take your order. Speaking of orders, choices will be tough because you’ll want to try half the menu. There are about 30 types of burgers, from classic to peculiar like an option topped with shrimp or served on glazed donuts instead of buns. If you’re in a seafood state of mind, the Drunken Sailor sandwich made with fresh blackened mahi smeared with tartar sauce and topped with lettuce, tomatoes, and onions is refreshing. And at Doo-Wop, hotdogs and bacon go together for its Leader of the Pack. Don’t forget the milkshake.

Where: 4010 Boardwalk, Wildwood, NJ 08260
What to order: Drunken Sailor sandwich and chocolate milkshake

Food + Drink10 Iconic Boardwalk Foods You Have To Try at the Jersey Shore
Tagged
Food + Drink Restaurants + Bars New Jersey, United States
What did you think of this story?
Meh
Good
Awesome