When I bought a new Honda Pilot, I was happy to have an eight-inch touchscreen display compatible with CarPlay. Before leaving the dealership, I plugged my iPhone into the car and used Google Maps to calculate a route home. I eagerly got rid of my Garmin standalone GPS device that afternoon.

That was a mistake.

After a year of road trips across Ohio, Florida, and North Carolina, I have come to realize that smartphone navigation apps have limits. Those limits are sometimes merely inconvenient but other times downright debilitating. After a three-day trip on the Blue Ridge Parkway with non-functional smartphone navigation, I reached my breaking point.

I now have a standalone GPS device suction cupped to my dashboard. And I think you should too. Here is a bread-down of the best GPS for road trips on the market, from Garmin to TomTom to smartphone navigation apps.

We hope you love the items we recommend! Just so you know, Matador may collect a small commission from the links on this page if you decide to make a purchase. 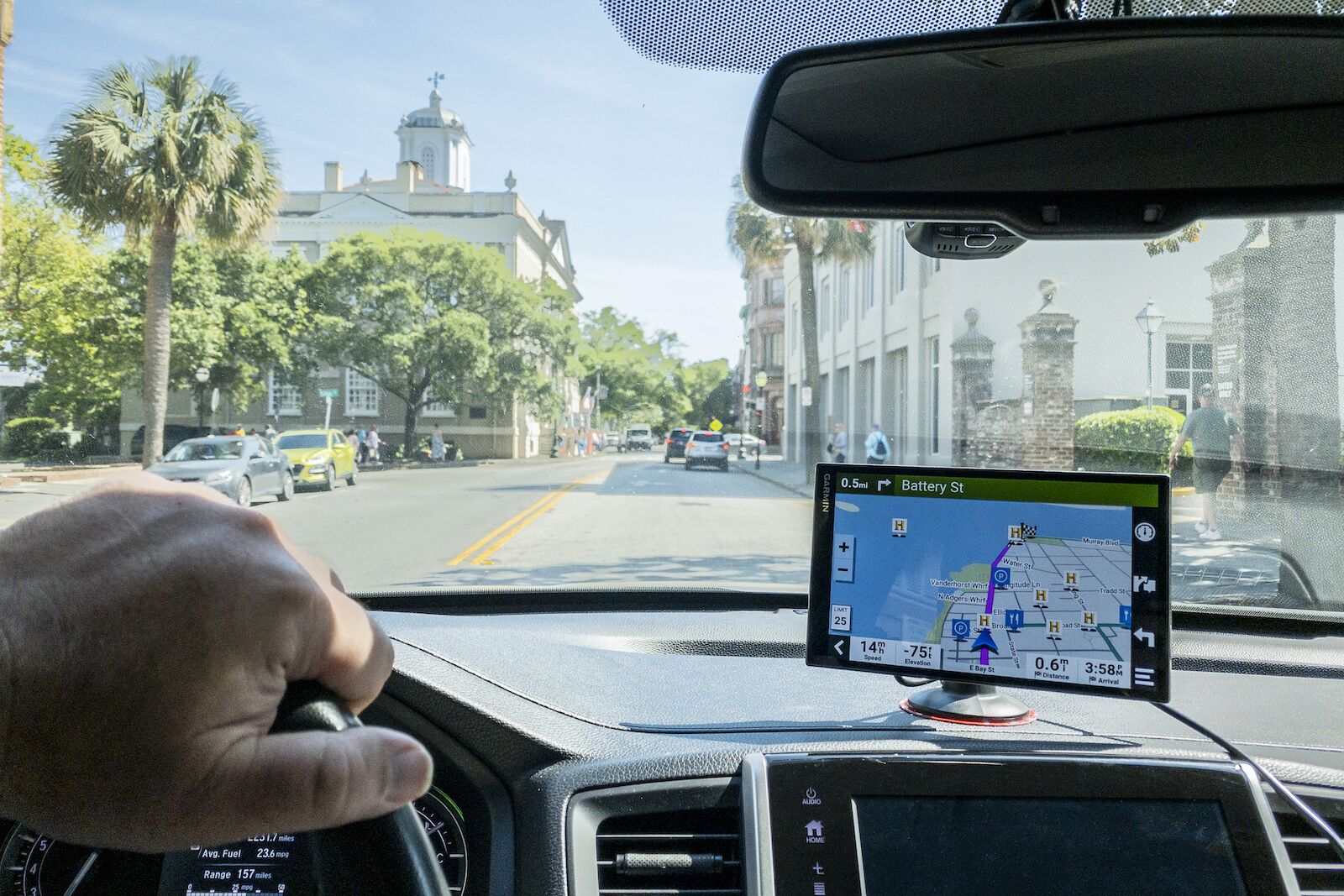 Built-in navigation systems are typically available on “touring” models of popular vehicles but are several thousand dollars more expensive than the base model.

Instead, you may want to choose between a standalone GPS device or smartphone navigation apps. There are three differences between these two options: built-in maps, battery life, and live traffic.

However, standalone GPS devices feature pre-installed maps covering the US, Canada, and sometimes more. Saved on internal memory, the maps are always available wherever you travel. In national parks, mountain adventures, and rural America you’ll be better off with a standalone GPS device.

Smartphone navigation apps are a constant drain on a phone’s battery. As long as you remember to keep the phone charged with something like the Anker PowerDrive Car Charger, you won’t have a problem with a dead phone battery when you reach your destination. Standalone GPS devices feature rechargeable batteries — they can be used for short periods unplugged — but typically, they are plugged into a 12V outlet for constant power.

The biggest difference between standalone GPS devices and smartphone navigation apps is access to live traffic. Smartphone apps like Google Maps and Waze download live traffic information on demand as you travel, revealing delays from construction work, detours, and accidents. But not all standalone GPS devices come with live traffic information — most base models lack the feature, and more advanced models require a Bluetooth connection to a smartphone.

The best GPS for road trips: Garmin vs. TomTom

When choosing a standalone GPS device, the only brand options are Garmin and TomTom. Fortunately, both are excellent choices.

TomTom offers three models — GO Comfort, GO Supreme, and GO Discover — with the first two models available in five-inch and six-inch screens, and the GO Discover only available in a seven-inch screen. On the GO Comfort, pre-installed maps include the US, Canada, and Mexico, while the other models include worldwide maps. All three models feature Wi-Fi updates and live traffic. The GO Comfort is their only model that does not have voice commands.

Garmin offers three models for automotive navigation — Drive, DriveSmart, and RV. The Drive is only available with a five-inch screen, the DriveSmart is available in six-inch, seven-inch, and eight-inch screens, and the RV features the largest screens at seven-inch, eight-inch, and ten-inch. The base model features pre-installed maps of the US and Canada but does not include voice commands or live traffic. The DriveSmart and RV models feature pre-installed maps of the US. and Canada, voice commands, live traffic when paired with a Bluetooth smartphone, and Wi-Fi for downloading map updates.

The biggest difference between Garmin and TomTom is the user interface. TomTom devices display more information on the screen, which often leads to an overcrowded and confusing experience. Garmin keeps it simple with a clean display, categorized points of interest, and several options for customization.

If you’re already familiar with TomTom, stick with those. But if you’re new to the market for standalone navigation devices, Garmin leads the industry for a good reason.

Choosing the best Garmin standalone GPS for your road trip

The Garmin Drive 52 is the base model with a five-inch touchscreen. The Drive 52 features pre-installed maps of the US and Canada. The device uses the same software as their other models to create routes between locations with turn-by-turn directions spoken aloud. However, that is where the versatility of the base model ends — it does not include voice commands or live traffic.

Best for: The occasional road tripper who wants a simple map from home to a destination. 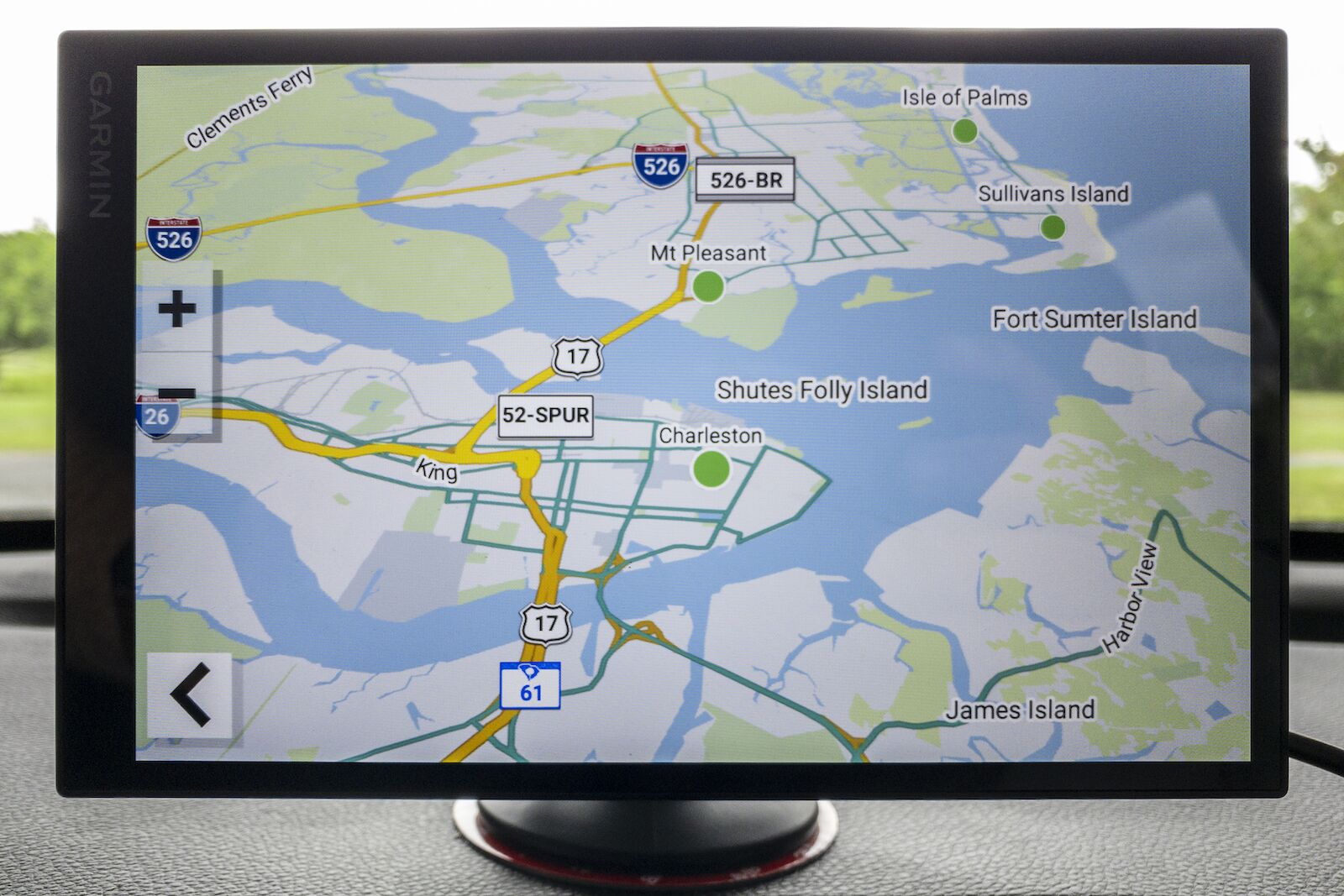 Manually searching the map on the touchscreen with the Garmin DriveSmart 76. Photo: Jason Barnette

The Garmin DriveSmart 76 is a significant upgrade with a seven-inch high-resolution touchscreen. Like the Drive 52, the DriveSmart 76 features pre-installed US and Canada maps. With the built-in Wi-Fi, it’s easy to connect to your home network and install map updates. Voice commands allow users to search for addresses, intersections, and points of interest, change the brightness or volume level, and search for points of interest along the current route. For live traffic, users need to download the Garmin Drive app (available for iOS and Android) and connect the smartphone to the Garmin device via Bluetooth.

Best for: The frequent road tripper who needs to find multiple destinations on multi-day trips. 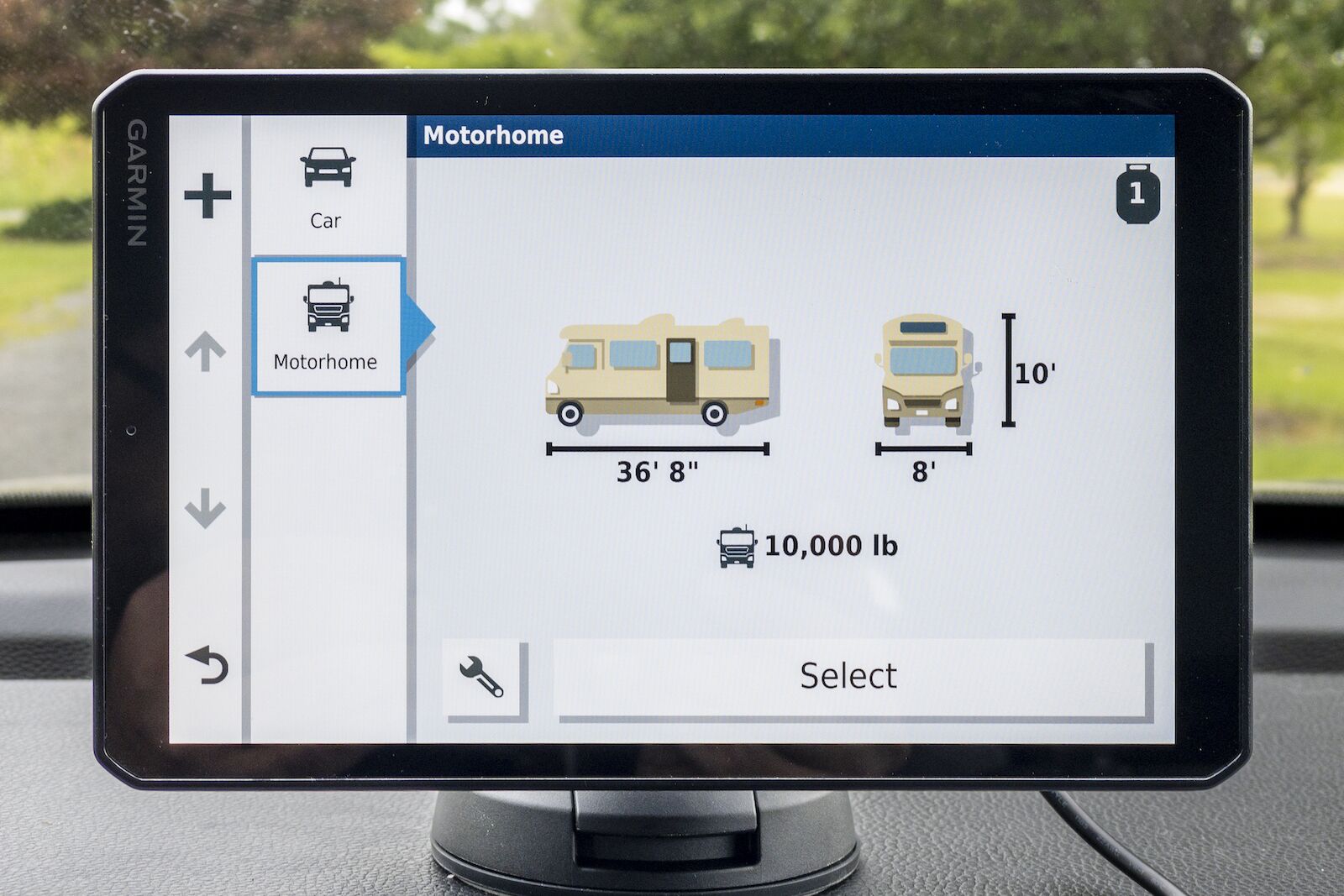 Setting up the RV specifications on the Garmin RV 890. Photo: Jason Barnette

The Garmin RV 890 is the best of the standalone GPS devices by Garmin. Featuring an eight-inch high-resolution touchscreen, the RV 890 uses a powerful magnetic connection to a suction cup base or a base permanently installed on the vehicle’s dashboard. The RV 890 has the same features as DriveSmart 76 but includes an option for adding details about the vehicle — length, width, height, weight, and the number of propane tanks. After a route has been calculated, Garmin will alert drivers if there are any obstacles like low bridges, sharp turns, or steep inclines.

Best for: Any road tripper with an RV, travel trailer, fifth wheel, or camper van.

Garmin GPS accessories to make the most of your investment

Along with any new purchase comes the inevitable accessories — and standalone GPS devices are no exception. All Garmin GPS devices come with a suction cup mount and 12V charging cable, but there are a few tidbits you’ll need to make the most of the device.

The suction cups are great for mounting to the windshield, but what about the dashboard? The Randconcept Dashboard Mounting Pad is a self-adhesive plastic disc that securely sticks to the dashboard and allows you to use the suction cup mount. Another option is the Garmin Friction Mount. The heavyweight mount features a non-slip bottom for an adhesive-free mounting option.

Add a backup camera to your vehicle with the Garmin BC 40. The camera, compatible with all DriveSmart and RV models, wirelessly connects to the standalone device and shows a 160-degree field of view. The backup camera can be voice-activated with commands through the standalone GPS device.

A standalone GPS device is an investment. So, what if you don’t want to spend that much on navigation on your next road trip? Try one of these navigation apps instead.

Google Maps is the most popular smartphone navigation app. It’s easy to get directions from your current location, or a custom starting point, to any destination. Set custom avoidances like toll roads or highways, change between directions for driving or walking, and you can create routes with up to ten points.

In 2013, Google bought the crowdfunded navigation app Waze for a whopping $1 billion. Waze is popular for showing locations of speed traps, speed cameras, and traffic cams. But, beyond those features, the app should remain a navigation choice for road trips with few destinations.

TomTom Go Navigation is an app version of their software found on standalone devices. It’s a powerful navigation app with voice control, live traffic, and maps of over 150 countries. But it comes with a caveat — it’s not free to use. A one-month subscription costs $4.99 and a 12-month subscription $22.99.

Roadtrippers is a different kind of smartphone navigation app that makes it worth the $29.99 per year subscription fee. The app features Roadtrippers’ database of user-generated points of interest and lets you drop dozens into a single route — it’s possible to road trip across the country with a hundred stops. Once the route is calculated, the app features turn-by-turn directions.

Road TripsI’m a Professional Road Tripper. Here’s What I Never Leave Home Without.
Tagged
Road Trips RVing
What did you think of this story?
Meh
Good
Awesome