One of the most underrated road trips in all of the United States, the Blue Ridge Parkway passes some of the Southeast’s most stunning landscapes and intriguing historical sites in its winding, 469-mile journey from Shenandoah National Park in Virginia to Great Smoky Mountains National Park in North Carolina. Touching thousands of miles of hiking trails, passing through dozens of state parks and national forests, and connecting hundreds of scenic overlooks, America’s longest linear park is nearly impossible to explore in its entirety. Still, you owe it to yourself to travel as much of the Parkway as you can in your lifetime, and there are plenty of Airbnbs to crash in along the way. So here are the eight best places to start. 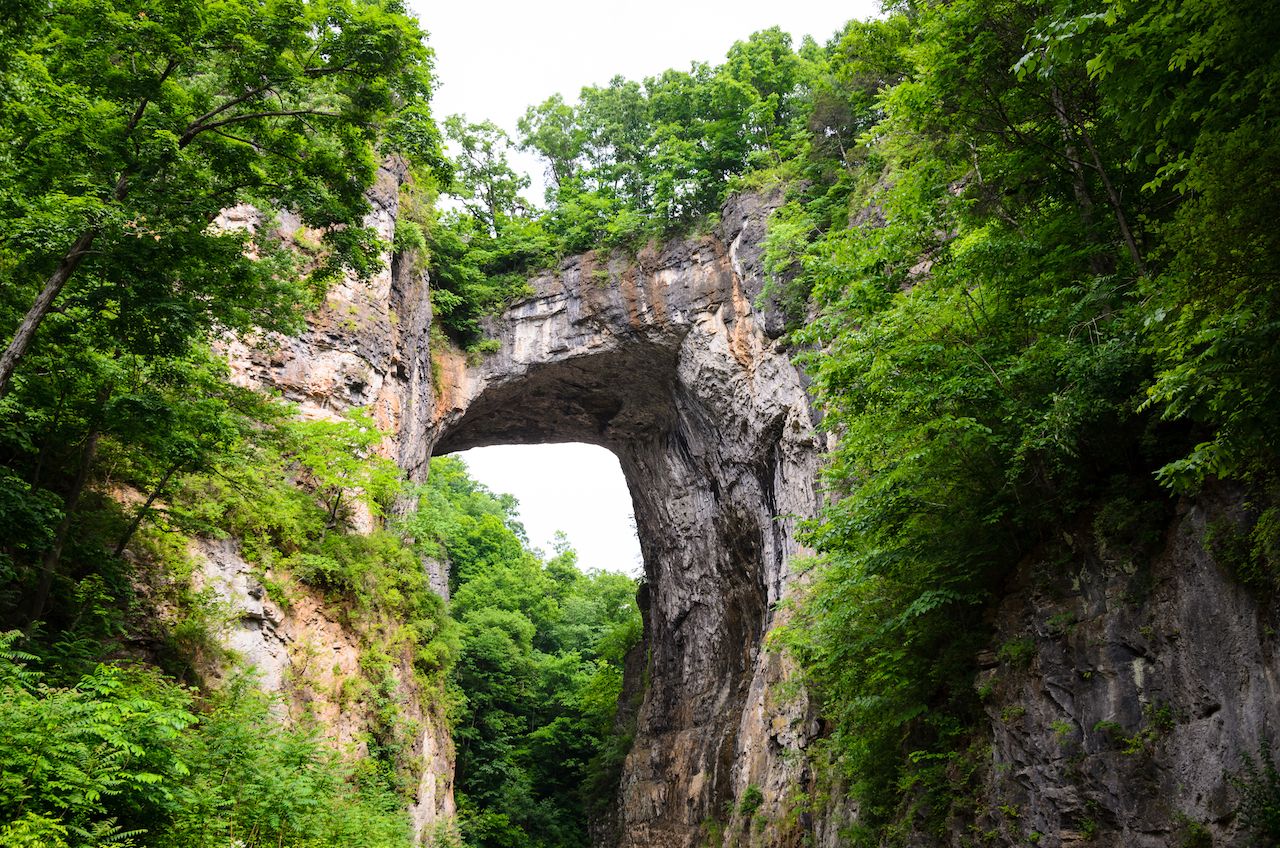 Natural Bridge is one of the most stunning and unique sites along the Parkway. The 215-foot-tall structure reaches 90 feet across a limestone gorge carved out by Cedar Creek. A longtime attraction, the bridge was once a sacred site of the Monacan Indian tribe of Virginia. Early frontiersman and colonialists were also drawn to the site, including a young George Washington who surveyed the site in 1750. Thomas Jefferson purchased the bridge in 1774 along with 157 acres of surrounding land upon which he built cabin retreat.

Just a short drive off the Parkway, the area is now a Virginia state park complete with hiking trails through the land’s forests and meadows and down to 30-foot cascade Lace Falls. There is also a Monacan Indian Living History exhibit on site where visitors can learn and experience firsthand the Monocan history and their ancient way of life. Adjacent to Natural Bridge State Park, visitors can explore the spectacular Caverns at Natural Bridge, more than 34 stories below the Earth’s surface. 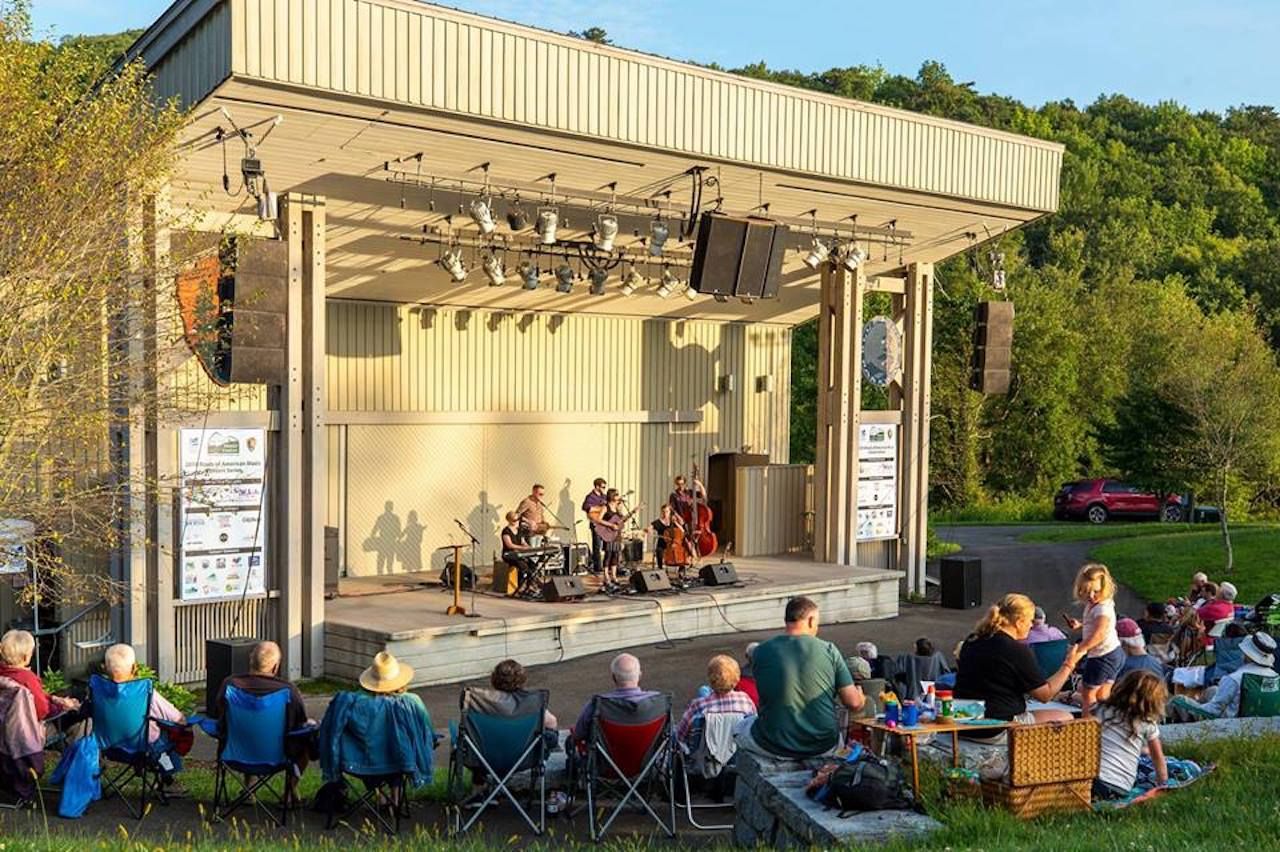 Established in 1997, the Blue Ridge Music Center was built with the mission to celebrate and enshrine the rich musical tradition of the Blue Ridge mountains. The center has an outdoor amphitheater, an indoor theater, and a museum. It hosts performers playing bluegrass and old-time music, as well as a variety of exhibits celebrating the region’s cultural heritage. For strangers to mountain music, the Blue Ridge Music Center is the perfect place to be introduced, and for bluegrass lovers, the place is a pilgrimage.

Open May through October, visitors can expect to hear banjo, guitar, and fiddle music any time they visit, whether there’s a concert going on or not. Rest in a rocking chair and listen to local volunteer musicians who come to play for the public. Visitors are even encouraged to join in and pick along if they’re able! Exhibits tell the history of music in the Blue Ridge mountains, as well as its influence on other genres, and the theater plays films and hosts educational speakers. At the instrument shop, you can even see how string instruments are crafted. 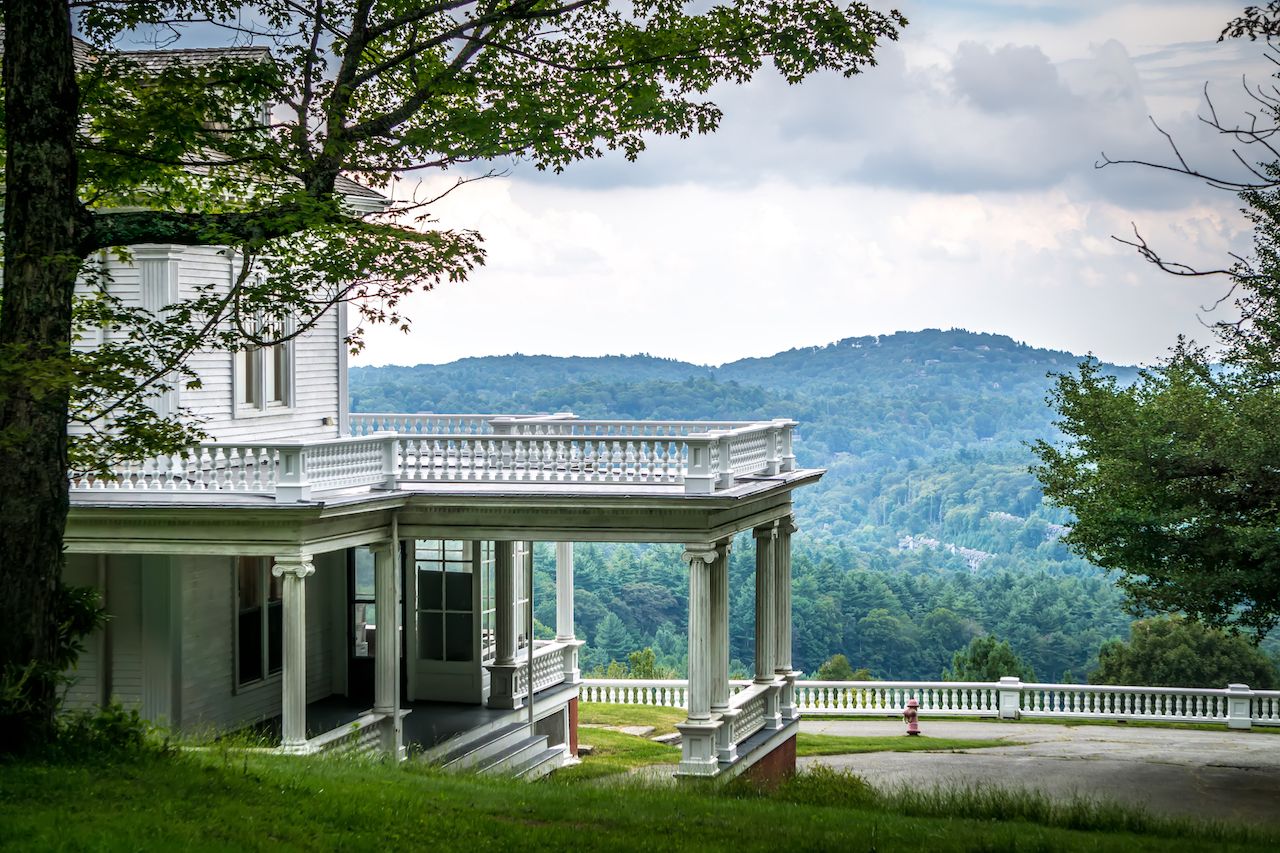 In the late 19th century, Moses Cone helmed one of the largest denim empires in the country. Suffering from a frail constitution, and ravaged by decades of stress from running his business, Cone acquired 3,600 acres near the resort town of Blowing Rock, North Carolina, in order to build a mountaintop escape. He constructed the 23-room Flat Top Manor as the crown jewel of his estate, which included apple orchards, farmland, 25 miles of carriage roads, and two man-made lakes, which he kept stocked with bass and trout.

The estate was donated to the National Parks Service in 1949 and was dubbed Moses H. Cone Memorial Park. Today, over a quarter of a million visitors come each year to explore the lands of the historic estate and marvel at the mansion — a monument to America’s Gilded Age. Locals use the old carriage trails for hiking, mountain biking, horseback riding, and cross-country skiing, and people still fish the man-made lakes. The park is also home to a craft center that displays a variety of artisan wares from the Southern Highland Craft Guild, an artist collective that preserves the historic craft traditions of the North Carolina High Country. 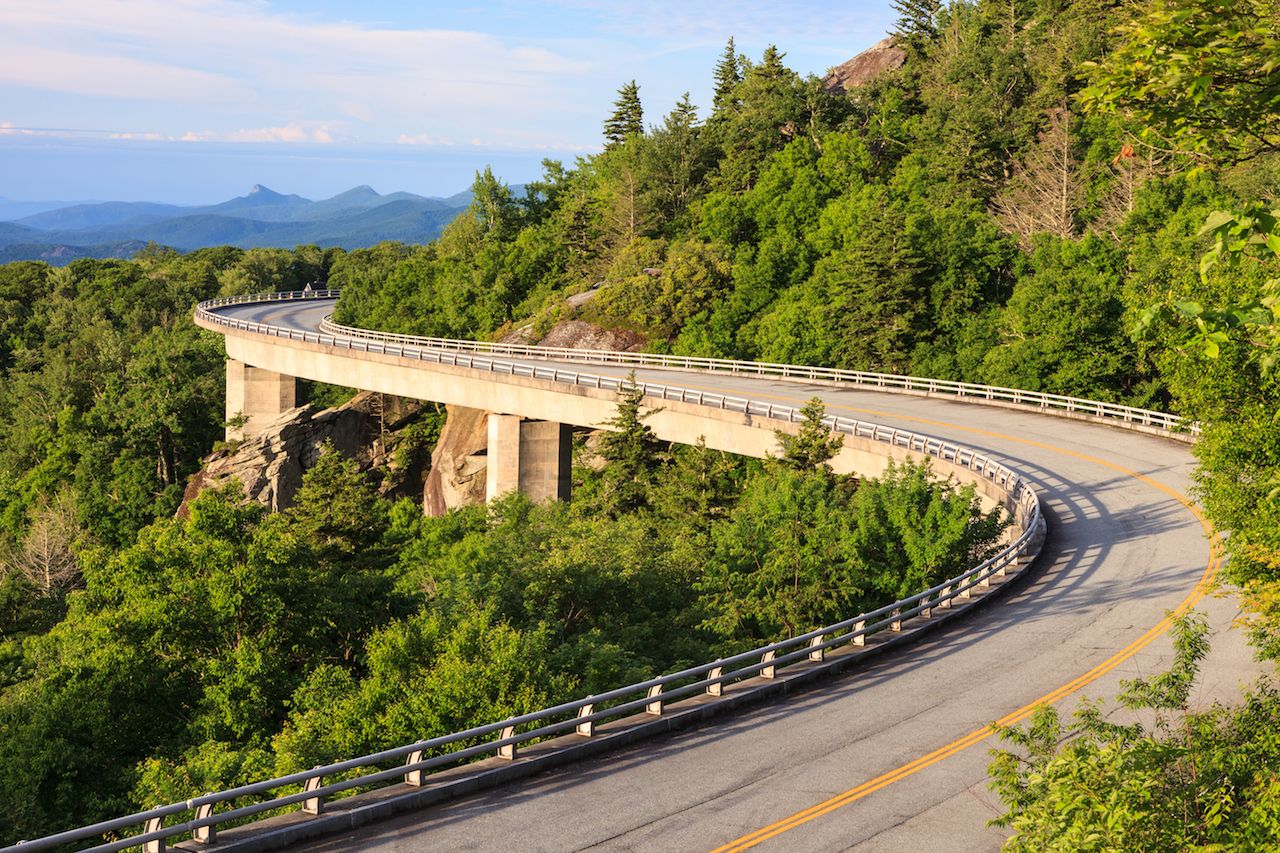 This iconic bridge, widely regarded as a marvel of engineering, is one of the most photographed sights on the Parkway. Before the viaduct’s completion in 1987, a “missing link” in the Parkway existed at the area surrounding Grandfather Mountain due to fear from environmentalists that a traditional cut-and-fill road would do irreparable harm to the fragile and ancient Grandfather Mountain ecosystem. The problem went unsolved until 1979 when construction began on an ambitious S-shaped bridge that would float beside the rocky edges of Grandfather mountain. The bridge is 1,243 feet long and consists of 153 50-ton concrete segments, and it has won countless international awards and become a destination in its own right.

Visitors have a number of ways to experience the bridge, apart from driving over it. A hiking trail at the visitors center passes beneath the bridge to give viewers an up-close look at the engineering wonder. The Tanawha trail, which also passes through the very popular Rough Ridge overlook nearby, runs alongside the bridge and even passes below it, offering hikers unparalleled views of the viaduct from the Grandfather escarpment. But perhaps the best time to see the bridge is in the winter when the Parkway is typically closed. Parking at the nearby highway 221 overpass, it’s only a short hike to reach the Viaduct heading north. Since the Parkway stays closed to drivers for most of the winter, you’ll be able to cross the bridge on foot and take your time enjoying the views that you would normally be driving through. 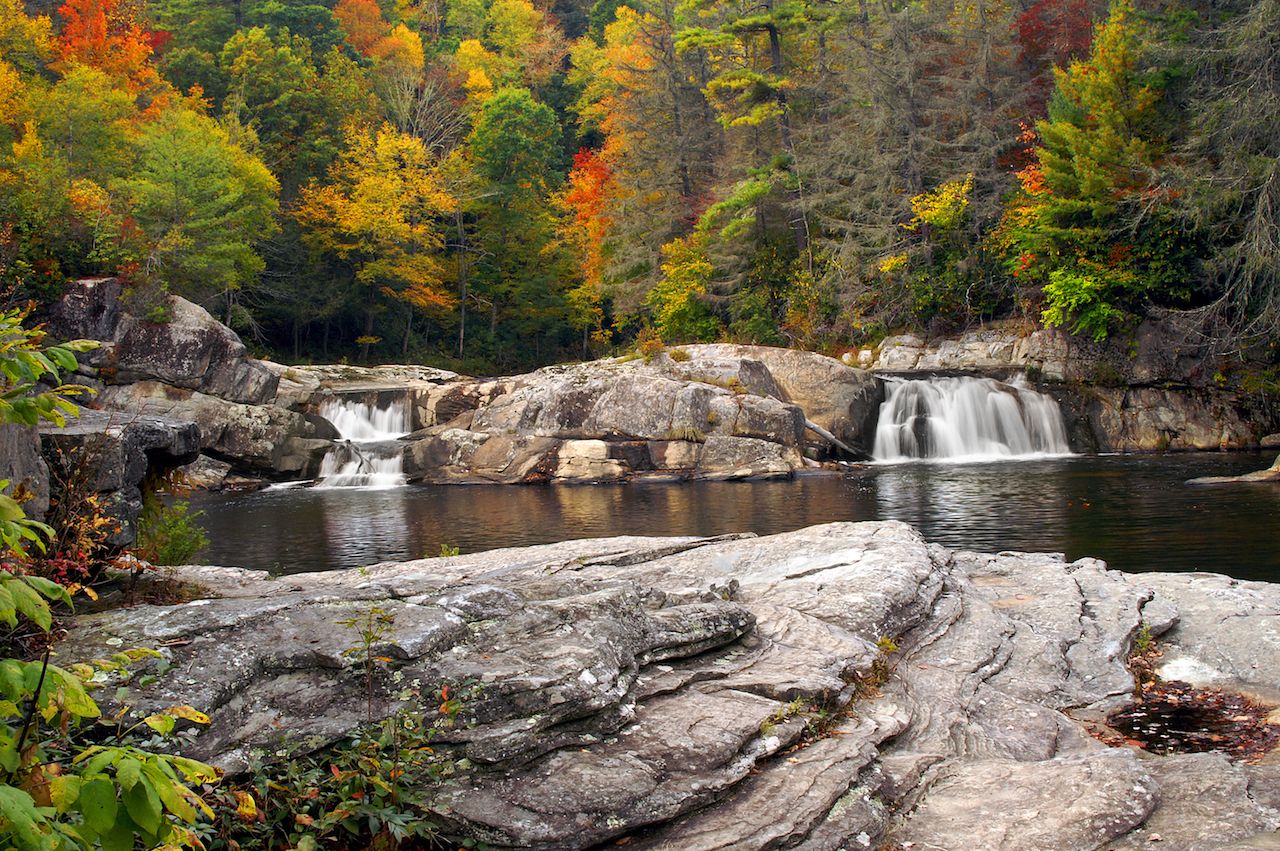 Sometimes called “The Grand Canyon of North Carolina,” the Linville Gorge has granite walls that snake 12 miles through the rugged backcountry northeast of Asheville. At the head of the gorge lies Linville Falls, a three-tiered waterfall that plunges 90 feet into the Linville River below. Because it is so easily accessed via the Parkway, it is probably one of the most popular waterfalls in North Carolina. Two trails from the visitors center link to five different viewing points of the falls, including at the base. There are also a picnic area and a campground on site.

But while getting to the falls may be easy, navigating the gorge is not. As the nation’s first designated wilderness area, the steep and rugged trails of the gorge are neither well-maintained nor well-marked. Still, it is one of the most popular backpacking destinations in western North Carolina and is a great way to enjoy the beauty of the Linville River while escaping the crowds at the falls. This section of the river through the gorge is also great for fishing as it receives much less pressure from the crowds at the falls. 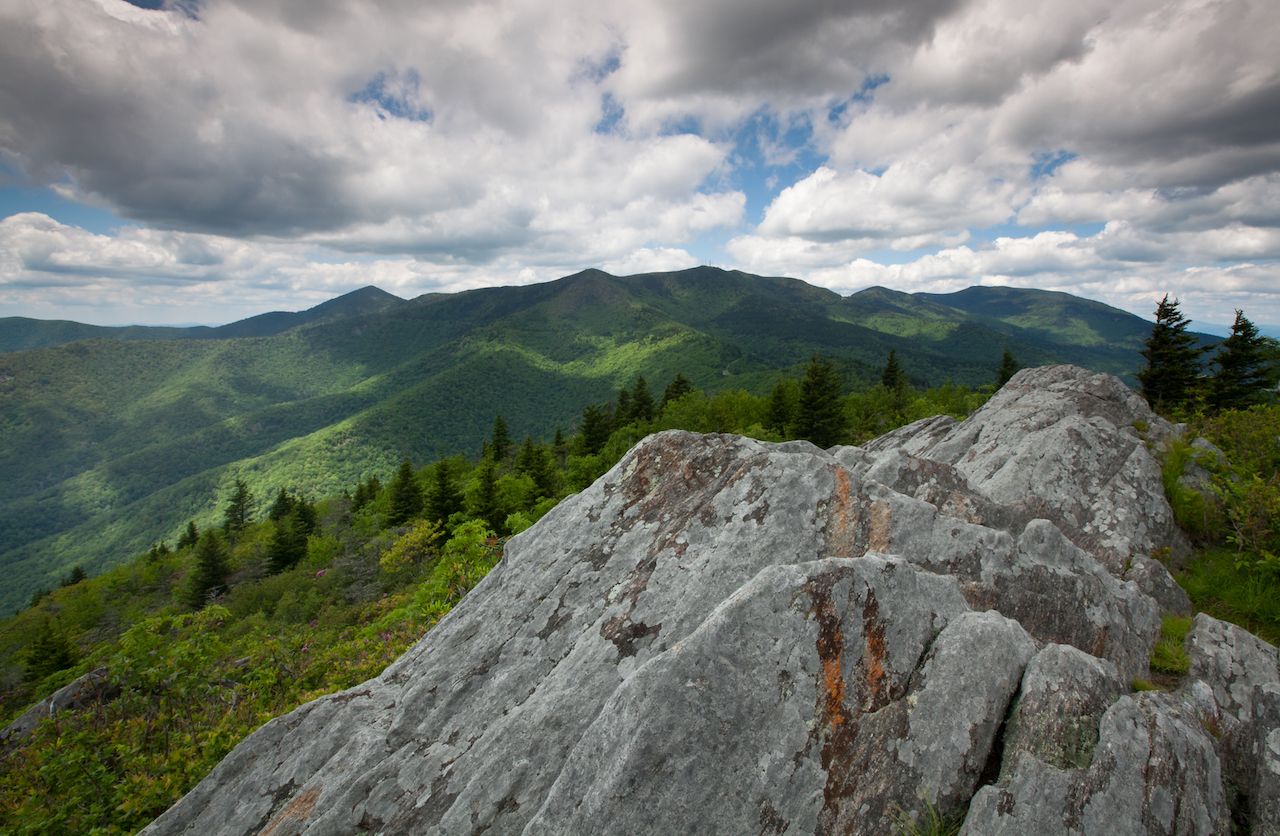 At 6,684 feet, the highest point east of the Mississippi, Mt. Mitchell affords views that are a must-see for anyone traveling the parkway. That is, if you catch it on a good day. The summit stays covered in cloud and fog eight out of 10 days. But even on a cloudy day, you owe it to yourself to go to the top, if for no other reason than to know that you’d have to look west of the Mississippi to find someone as high up as you are. Besides, it’s easy to get to the top. A scenic drive from milepost 355 will take you all the way to within a quarter mile from the summit. From there it’s a paved path all the way up to the 360-degree observation deck.

If you can’t see anything when you get to the top, don’t sweat it. There are plenty of other things to do here. There are miles of hiking trails within the state park that will allow you to explore the mountain’s unique ecosystem. Due to its high elevation, the flora and fauna of Mt. Mitchell are more similar to Southeastern Canada than to the rest of the surrounding Appalachians. And if the weather is no good at all, you can check out the museum or the restaurant just below the summit. 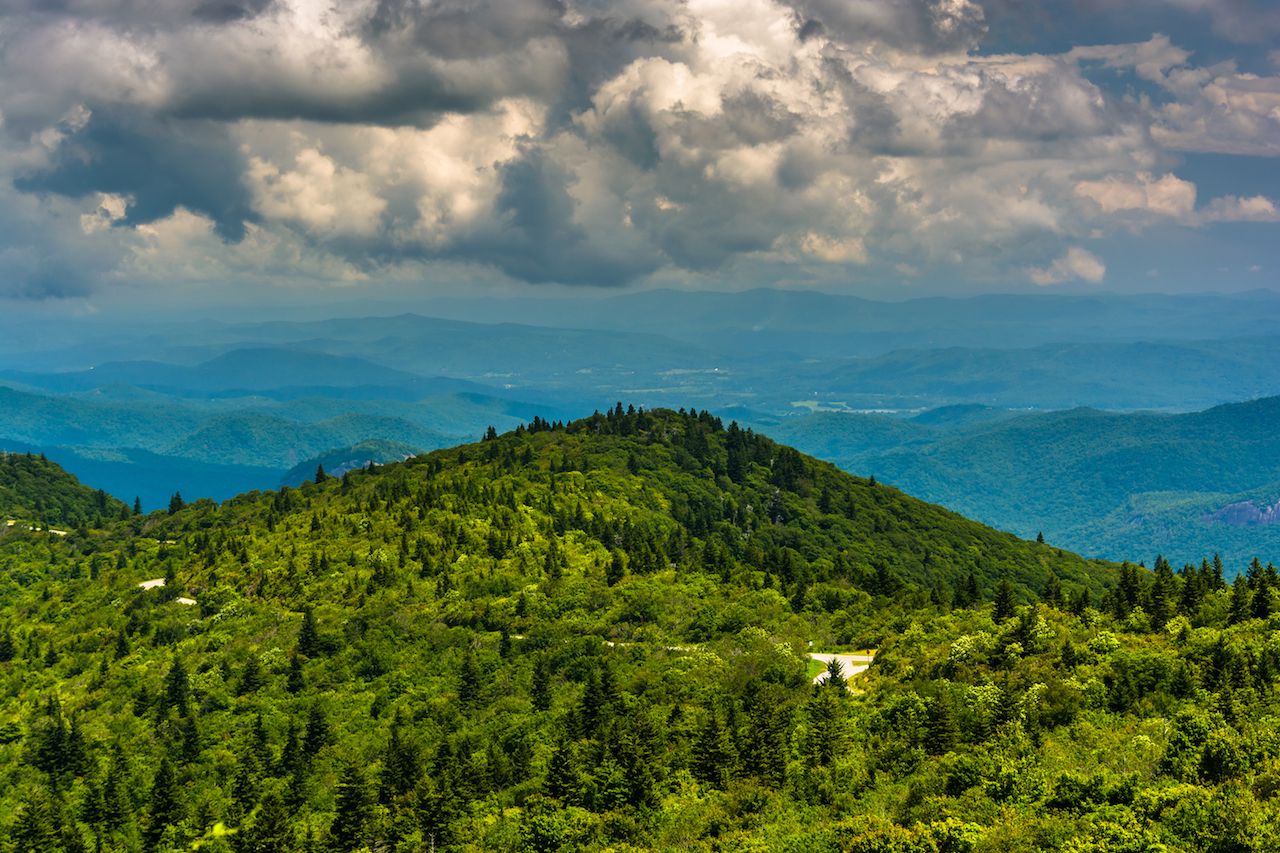 The Black Balsam area is a favorite hiking spot for locals, providing some of the biggest and best views along the parkway. The most prominent peaks in this area — Black Balsam Knob, Sam Knob, and Tennent Mountain — are unique because they are mountaintop “balds,” or treeless meadows covered with grass and low vegetation. Without any trees to block views, Black Balsam offers some of the most panoramic vistas in all of the Blue Ridge. The Art Loeb Trail connects Black Balsam to the nearby Shining Rock Wilderness, as well as Cold Mountain, the inspiration for the 2003 film and the novel it was based upon.

Lots of people do short day hikes in this area or take picnics up to the top. Camping is also very popular here, and a number of backcountry sites along the ridgeline offer spectacular views. Many people also backpack in the Black Balsam area, following the Art Loeb trail to the Shining Rock Wilderness or to the nearby Graveyard Fields. Both Black Balsam and Graveyard Fields are also very popular for wild blueberry and blackberry picking, and in the summer months, it’s not uncommon to see people toting jugs or plastic bags full of berries. Bring a container and try it out for yourself. Just watch out for the black bears that are common here. 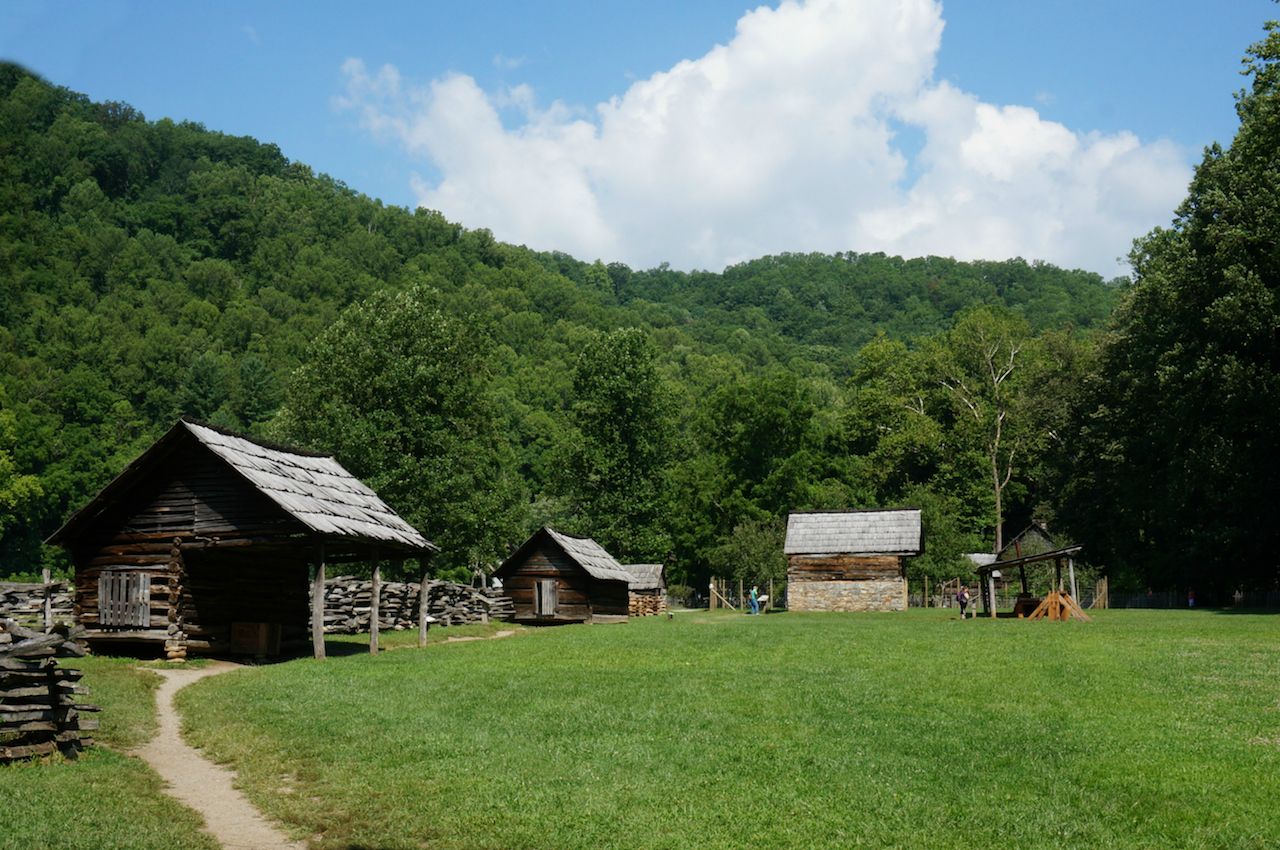 The Blue Ridge Parkway ends at Oconaluftee, a former Cherokee village and the gateway to Great Smoky Mountains National Park. About two miles south of where the Parkway ends at highway 441, the Oconaluftee Indian Village recreates life in a Cherokee village in the 1760s. Villagers replicate every aspect of Cherokee life of that time, from building canoes and tanning hides to weaving baskets and making pottery. Some craft-making classes are offered, as well as seasonal shows and special events. One of those shows is the acclaimed outdoor drama Unto These Hills, which recounts the triumphs and tragedies of Cherokee history, up through their removal and relocation to Oklahoma on the Trail of Tears.

Just north of the Parkway lies the Oconaluftee Visitors Center, the site of an old Appalachian farmstead and the present-day entrance to the national park. Adjacent to the stone-strewn waters of the Oconaluftee River, the visitors center lies in the open meadow of the Oconaluftee Valley, offering gorgeous views of nearby Rattlesnake Mountain. Visitors can stock up on supplies or get advice from rangers before heading into the park. In addition, the Mountain Farm Museum is a collection of old wooden barns and cabins from across the park, assembled together to recreate an Appalachian farmstead. There are also ample opportunities to spot wildlife in the meadows around the visitors center, including deer, wild turkeys, and even elk, which were reintroduced to the park in the early 2000s after being eradicated over 200 years prior.

Parks + WildernessHow To Use Asheville as Your Base for Great Smoky Mountains National Park
Tagged
Road Trips Travel Trip Planning United States
What did you think of this story?
Meh
Good
Awesome