EVERYONE KNOWS THE APPEAL of Washington, DC: monuments, museums, and, you know, it being the nation’s capital and all. The tourist hot spots are important, for sure, but DC is no island — the communities surrounding it provide some much-needed balance.

Montgomery County, Maryland, which borders the District to the north, is full of urban enclaves, trail systems, and theatre and art spaces that shape its own unique identity, making it more than just a gateway to DC. Stay here, and you’ll explore top-notch public art, funky artist collectives, farm-to-table breweries, festivals, and opportunities for outdoor adventure that you’d never find in the capital proper.

Here are just a few compelling reasons why Montgomery County is the best place to stay on a trip to DC.

If you want cities, you’ve got options. 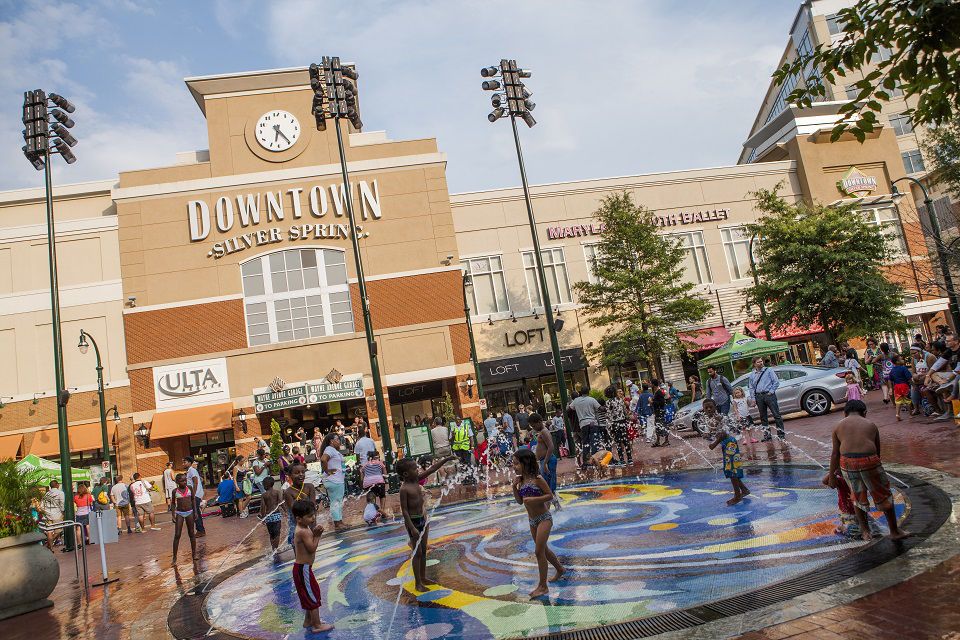 Photo: Ken Stanek Photography and the Arts and Entertainment District of Silver Spring

Montgomery County’s larger communities close to DC are no sleepy suburbs; they’re cities in themselves. Takoma Park, Silver Spring, and Bethesda border the District, while others, like Rockville and Gaithersburg, extend far into the county. And each is worth a visit in its own right.

Those who actually reside in DC are known to venture north for Bethesda’s street scene, especially around Bethesda Row — a huge shopping, dining, and entertainment district that often hosts events. Think patios, cobblestone streets, and lots of greenery and action. There’s always something on the calendar, like paella-making classes at Jaleo or wine tastings at Redwood Restaurant. You’re also bound to encounter more generous happy hours than in DC, rowdy brunches, and trivia nights galore.

Thanks to a dedication to public art, it’s easy to build an urbanist adventure out of just wandering the streets — there are over 50 public art pieces in downtown Silver Spring alone. One of the best ways to take this all in is to just meander — you might stumble across the “Hand of NOAA,” which sits outside the National Oceanic and Atmospheric Administration’s Silver Spring headquarters, or one of the many murals on walls across the county.

Also look out for the East/West Beacon, Sisyphus, and “the wave pool,” and stick around for the DNA-inspired light show on the UT bridge, part of the Bio Wall. What’s a bio wall? It’s a public art display showing nightly science “movies” set to music — and even the seats to chill out on are sculptures in themselves. Tip: Scan the QR codes on top of the courtyard’s lights, and see what pops up.

But maybe even more important than art? Accessible parking. Here, it’s easy to park your car once and move among these cities or into DC using mass transit options like Metrobus, Metrorail, MARC, and the county’s Ride On bus service. Biking is also awesome here — trails and bike lanes wind throughout the county, so bring yours or score a short-term Capital Bikeshare membership to get around as the locals do. There are more than 300 bike stations scattered throughout the area, and the first 30 minutes are free. Zero parking fees, zero parking headaches, and zero emissions.

There are plenty of pick-your-own adventures. 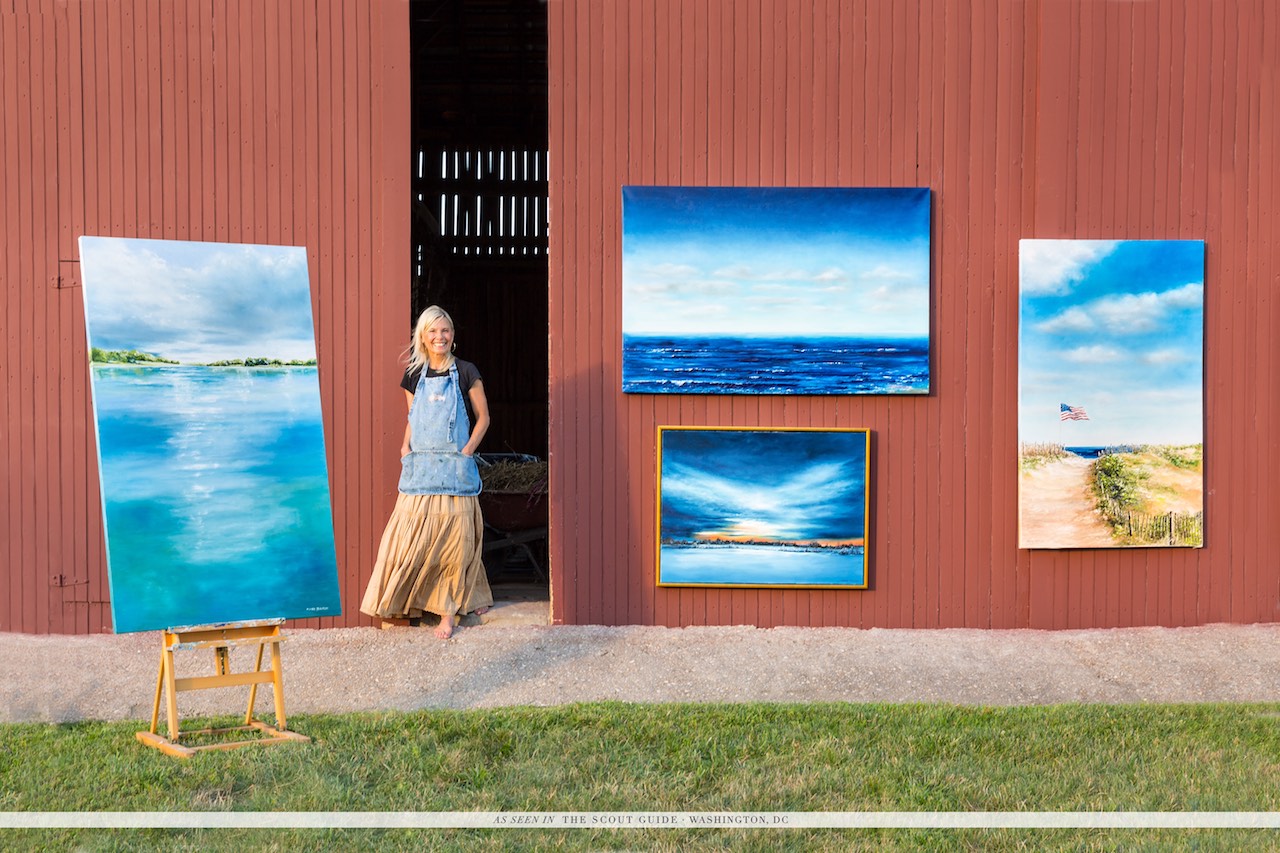 Photo: The Scout Guide for Countryside Artisans of Maryland

Not far from the bustle of the city is Upper Montgomery — and here, it’s undeniably rural. The county’s countryside is so peaceful there’s even an arts program, Countryside Artisans of Maryland, that draws inspiration from the surrounding Maryland farms. Studios and galleries have taken up shop in the foothills of Sugarloaf Mountain, perfecting everything from the art of watercolor to growing hops and making artisan teas. They welcome visitors, which means you might find yourself in a yarn and textile collective, at a local farm-brewery, perusing handmade quilts, and in a potter’s studio over the course of a couple of hours.

Produce picking is another popular pastime throughout the region, with places like Butler’s Orchard and Larriland Farm, where you can pick anything from fruits and vegetables to flowers. Strawberry season usually starts in early June, berry season amps up in the summer, and apple picking can last late into fall.

After a full morning of picking (and sampling), picnic areas, trails, bakeries, and markets are never far away. The whole experience is a super budget- (a day pass at Butler’s Orchard is $3) and family-friendly experience. If you don’t have kids in tow, hit up one of the growing selection of wineries afterward, like Rocklands Winery.

Your options are bigger than your stomach. 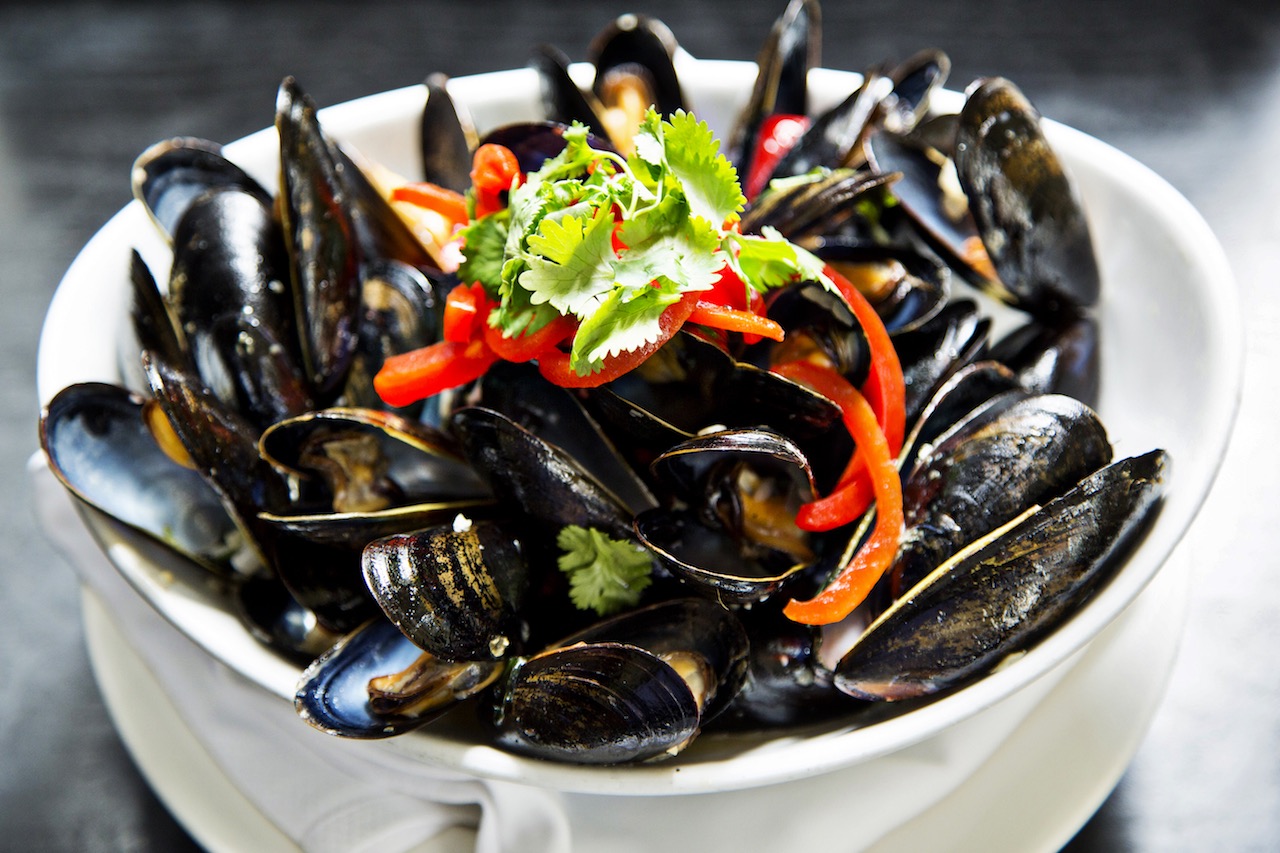 Montgomery’s awesome food scene is no anomaly — it benefits from a strong immigrant community and a growing population of young professionals (aka foodies). A lot of DC’s immigrant populations have settled in the surrounding counties, forming hot spots of international cuisine that are both authentic and affordable.

You won’t know what to do with all your choices when it comes to Salvadoran and Ethiopian food — products of two of the area’s largest immigrant groups — with traditional restaurants found all around Montgomery County. Make sure to try Salvadoran pupusas at Los Chorros Restaurant in Wheaton, or if you’re feeling indecisive, you can order a whole platter of Ethiopian staples at Sheba in Rockville. Tip: For this one, you’ll probably want to bring a friend (or two).

International influences and haute cuisine are on display in the area’s upscale scene as well — the Black Restaurant Group’s Republic in Takoma Park and Black Market Bistro in Garrett Park were both recently listed among Washington’s 100 best restaurants. The latter is set in a Victorian house and has pretty much perfected the art of brunch. Try the New Orleans-style beignets or the potato latkes with Granny Smith apples — you can thank us later.

Moving on to the beverage side of things, look no further than Urban Winery for great wine. You can taste everything they have on the roster, or mix it up with something you create yourself — winemaking is part of their experience. For a hoppier drink, try Denizens Brewing Company in Silver Spring, Waredaca in Laytonsville, and 7 Locks in Rockville. Waredaca’s beers always include at least one ingredient grown right there on the family farm, Denizens has a dog-friendly beer garden, and 7 Locks hosts Food Truck Fridays, featuring anything from pizza ovens to mobile BBQs to Paraguayan street food. And finally, don’t miss Brookeville Beer Farm — it’s the art of brewing, sustainable farming, and the satisfaction of a can’t-get-more-local-than-this craft beer all rolled into one.

The locals have a lot to say. 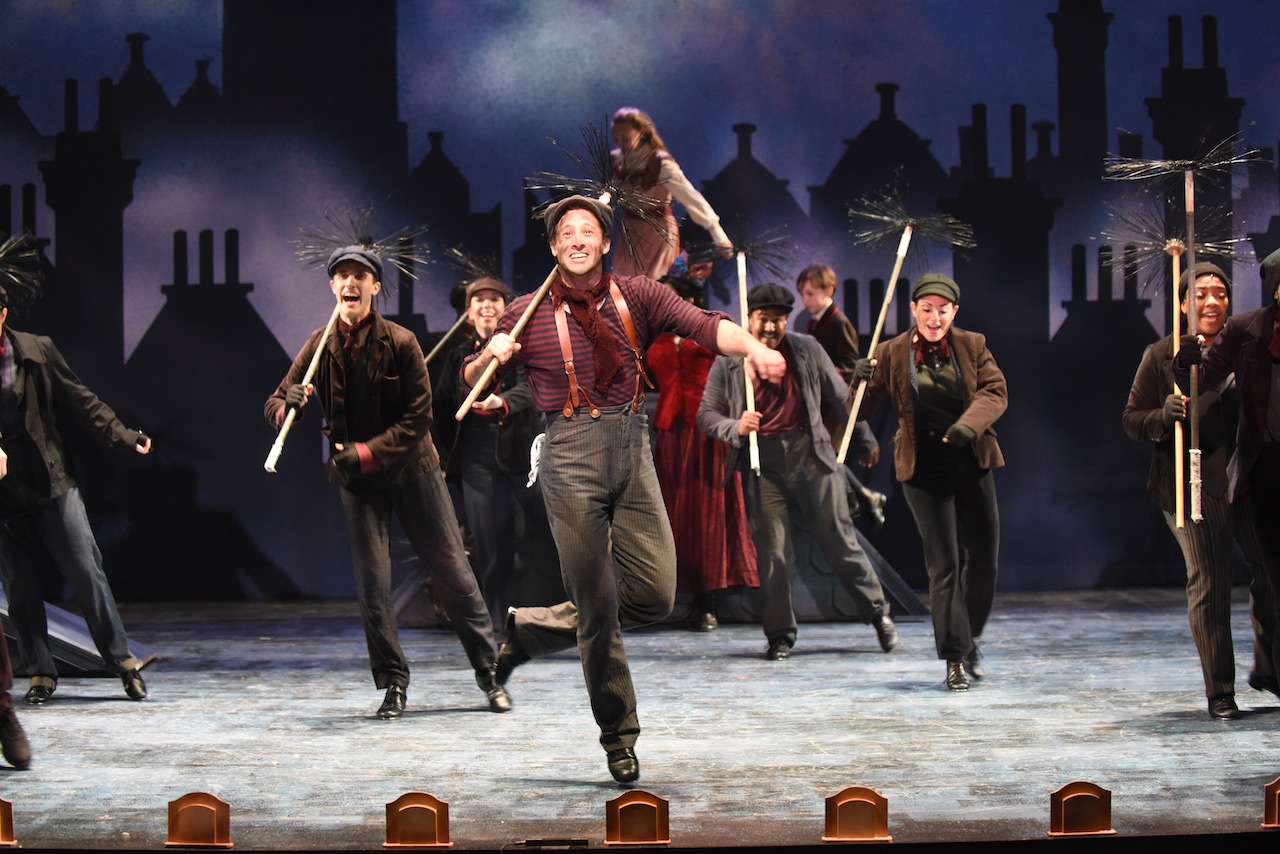 People from greater DC like to be heard. Performing and fine arts thrive in spaces like North Bethesda’s Strathmore, where you’ll find jazz, symphony, dance, and visiting speakers like Whoopi Goldberg and David Sedaris; and Germantown’s BlackRock Center for the Arts, which hosts everything from Celtic music to hip hop dances to chamber music to contemporary circus performances.

Across the county, you can catch live music, family-friendly events like Erth’s Dinosaur Zoo Live, international dance acts, and comedy shows. BlackRock hosts a ton of classes regularly, Strathmore has separate spaces for visual art exhibitions (with more than two dozen exhibits in the gallery every year), and AMP by Strathmore is a cabaret-style space where you can see a show (comedy, concert, or otherwise) over delicious food — it’s a rotating menu, so every experience is different.

Head to the Olney Theater Center and their four-theater campus for a mix of Broadway-style productions and more experimental performances. You’ll find shows like Mary Poppins and Proof, but also lesser-known productions like Fickle (a comedy adaptation of the French The Double Inconstancy) and The Magic Play (the latest show by Andrew Hinderaker). And for a smorgasbord of things to do, book it to The Fillmore. Start by thinking big, and then think bigger — this place showcases everything from Pottercon to Wyclef Jean. Both up-and-coming acts and international superstars grace the stage, and the schedule is so jam-packed you’ll even find them making headlines on Mondays and Tuesdays.

To get your own feet on a stage, head to Glen Echo Park for its social dances, open to the public and ranging from swing to lindy hop, waltz, and tango. Lessons are offered, and then it’s hours of dancing and endless people-watching.

The great outdoors are right here.

As cosmopolitan as Montgomery County can be in some parts, it’s equally outdoorsy in others. Neighborhood parks are around nearly every corner, from green patches and urban pockets to conservation education centers to foothills and meandering paths.

A definite highlight is the C&O Canal National Historic Park, which served as a cargo transportation system into DC before railroads took over. You can walk or bike along the 184.5-mile towpath and camp at a number of the National Park Service’s free hiker-biker sites, or even rent one of the historic lockhouses, where quartermasters of yore made sure boats were able to safely navigate the canal.

Great Falls Overlook is a local favorite along the towpath, and it leads to the Billy Goat Trail — a rocky hike that’ll take you up scrambly paths and over steep cliffs and massive boulders. Rest assured that not all of the county’s 100 or so miles of hiking trails are this strenuous. Though, technically, you could follow the C&O Canal Trail all the way from DC to Pittsburgh.

Even if you prefer to stick close to the urban areas, there are miles of leafy trails within city limits. Capital Crescent and Rock Creek Park connect to Bethesda and bring walkers, joggers, and bikers into the heart of DC. They’re especially great on weekends, when people aren’t commuting to work and part of Rock Creek is closed to car traffic — meaning you can walk or bike throughout Montgomery County in peace and relative quiet. Here, it’s easy to see anything and everything from a brand new perspective.

This post is proudly produced in partnership with Visit Montgomery County.
Tagged
Travel Washington, DC, United States
What did you think of this story?
Meh
Good
Awesome