Japan often brings to mind the teeming but ordered masses on Tokyo’s Shibuya Crossing, the world’s busiest intersection, or Kyoto’s Golden Pavilion, a must-see — if you can peer through the throngs of tourists. But there’s a lot more to this nation stretching from the Sea of Okhotsk to the South China Sea. The natural and cultural landscape is one of the most varied you’ll find in one island nation, and it’s a great place to discover with kids.

The ancient rubs up against the modern almost everywhere, and a dedication to public safety means that you won’t feel like you’ve got to hold on so tightly to your children that you can’t all enjoy the sights, sounds, and flavors of this land of contradictions: traditional and futuristic, Western and Eastern, man-made and natural, congested and quiet. Here are some of our favorite places to experience with children. A Japan Rail pass will make your visit easy and allow access to the famous shinkansens. 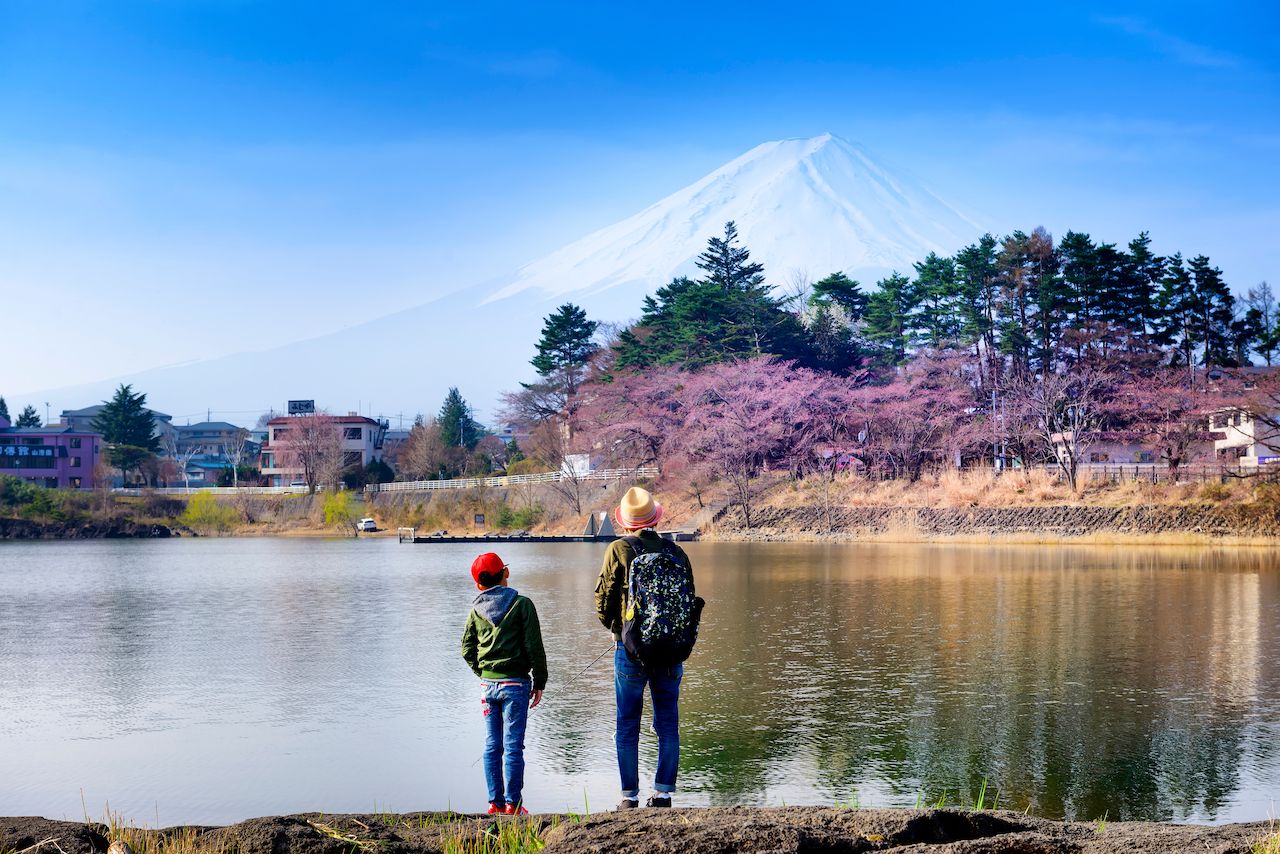 The famed, sacred mountain and its attendant lakes are fascinating natural wonders for kids and their adults. Beyond the natural high everyone can expect from climbing the tallest mountain in Japan, you can enjoy uniquely Japanese treats on the lake — notably a view of the orange torii gates of Hakone Shrine and a 70-minute round-trip tour on a “samurai warship,” which to Westerners looks like a pirate ship. Japanese are noted for their affinity for nature, and the indigenous Shinto religion worships awesome natural features.

For the iconic, 12,388-foot mountain, we recommend a two-day trek with a bilingual guide, allowing for a night in a mountain hut as well as hot prepared meals and a summit sunrise. The best way to get to the mountain lake is on the scenic Hakone Tozan Railway. The railway has small mountain trains running over gorges and through landscapes dotted with thousands of hydrangeas, which are illuminated in the evenings. (June and July are the ideal months for this experience.)

Hakone-Yumoto to Gora Station is the section you’ll want to ride. After this, take a cable car covering a rise of almost 700 feet in 10 minutes. The final leg to the lake is by the Hakone Ropeway. Of the many sites to visit nearby, check out the Hakone Ekiden Museum, memorializing one of Japan’s most followed sporting events, a collegiate relay marathon that starts and ends in Tokyo, turning around at Lake Ashi. 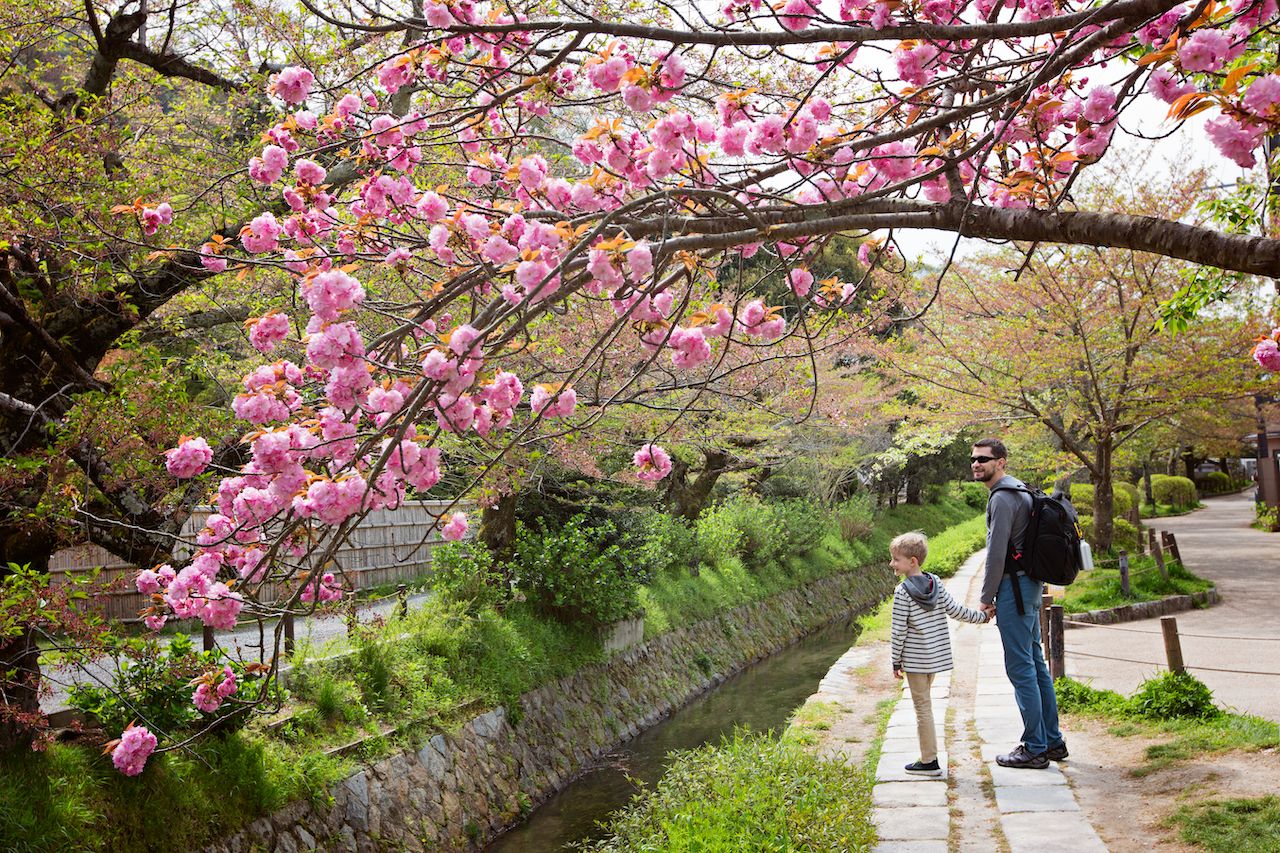 With over 1,600 temples, Kyoto can be overwhelming — unless you plan it well. Thanks to the fact that each temple or shrine is surrounded by gardens and open space, and that there are numerous parks, Kyoto is Japan’s greenest city. It’s also a great city to explore on a bicycle — which you can ride to visit some of the ancient capital’s most beautiful, striking structures. The Temple of the Golden Pavilion, coated in gold leaf, is a must. Relatively small, it nevertheless will impress even the smallest child; people tend to go silent at the sight.

Another indelible memory will be made at Fushimi-Inari Taisha Shrine, which was created to cover an entire mountain in the southeast section of the city. In about three hours, you can make a round-trip hike from Fushimi-Inari or Inari Station, passing through hundreds of vermilion torii gates and past multiple shrines and sub-shrines. By the time you’ve summited Mount Inari, you’ll see a grand view of southern Kyoto. Inari is the god of the rice harvest, whose messenger is the fox, so be prepared for awesome fox statues, some holding the key to the rice storehouse in their mouths.

When you’re ready for some crowds and amazing food, head over to Nishiki Market, a 400-year old institution known as Kyoto’s Kitchen. Nishiki is open from 10:00 AM to 6:00 PM. The Japanese separate their foods, so expect to browse through variety within variety: pickle stands; shops featuring kyoyasai (41 distinct designated traditional vegetables cultivated since the Edo era); rice shops offering fresh rice balls and dry rice for your pantry; freshly made senbei (rice crackers) with different flavors; mochi of all shapes and sizes; and, a favorite with my kids, fresh grapefruit juice, with the straw stuck straight into the fruit. Cucumbers on a stick are refreshing if you visit in the summer. 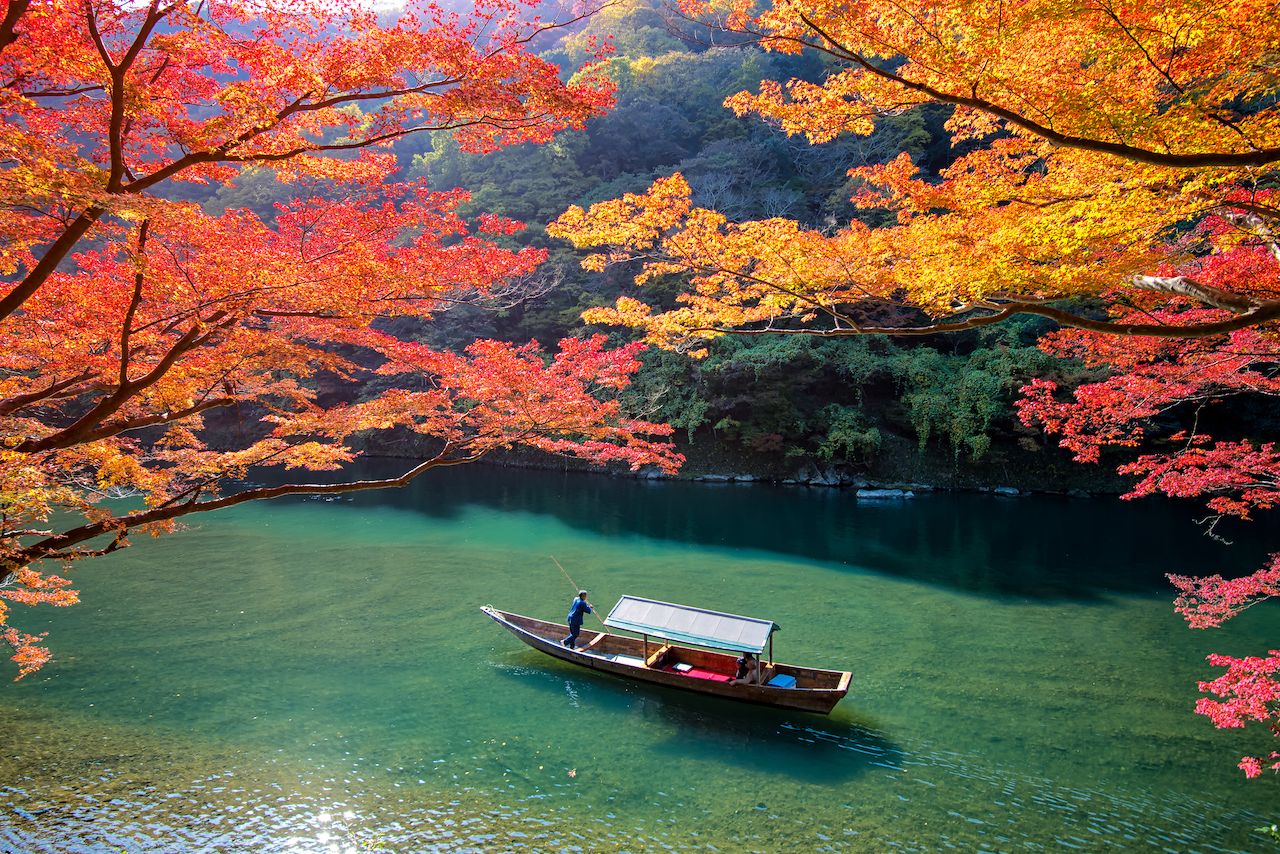 Adventurous kids will love a two-hour riverboat ride on the Hozu River, part of a 1,000-year history of water transport. With dozens of others, you’ll be rowed from Tanba Kameoka to Arashiyama in Kyoto. Without having to propel the boat yourselves, you can experience rapids, waterfalls, deep pools concealing meter-long carp, and plenty of mountain views. Look for the marks on the banks where for centuries boatmen have pushed their poles to avoid the boulders in the stream. As you approach the end of your trip, a motorized floating convenience store pulls up — treat the kids to a snack.

The Japanese have a peculiar (to Westerners) relationship with fauna; at Nara Park, they sell special shika senbei (deer crackers) you can feed the deer roaming around. At the Iwateyama Monkey Park in Arashiyama, you can buy apples and other treats to feed the 120 snow monkeys, the same kind you’ve seen in pictures bathing in hot springs. Being allowed to see monkeys in their natural habitat will certainly thrill not only kids but adults as well. Just be sure to follow the directions on the signs: no staring them in the eyes or touching. 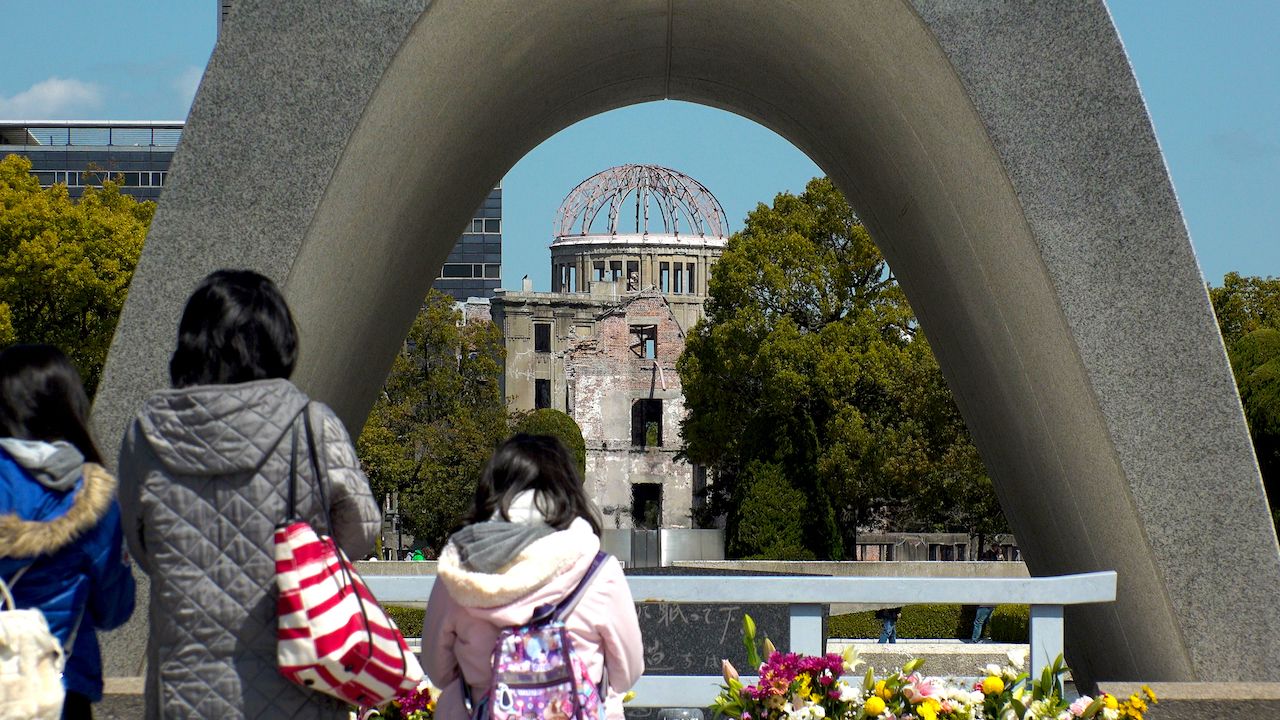 The site of an atomic bomb disaster might not seem like something kids would enjoy, but Hiroshima does tourism particularly well. Unless your children are toddlers, they’ll be fascinated by the exhibits of artifacts, particularly the clothing found after the blast. They’ll learn firsthand about the suffering of real people, including children; understand the dangers of nuclear weapons; and recognize that this planet belongs to all of us, and it’s our responsibility to protect one another.

After visiting the Peace Memorial Museum, the Orizuru Tower provides a respite. There, on the 12th floor, you can fold paper cranes for peace; you’ll learn how from a webinar provided on tablets arranged on tall tables. Then walk on a plexiglass floor to drop them into the transparent “Orizuru Wall,” where your cranes will join those of thousands of other visitors. After, take a walk up the spiral slope to the rooftop cafe and turf-lined “Hiroshima Hills” — a sloping area open to the elements, where you can borrow a lap blanket and eat some cake from the standing wooden tray provided. 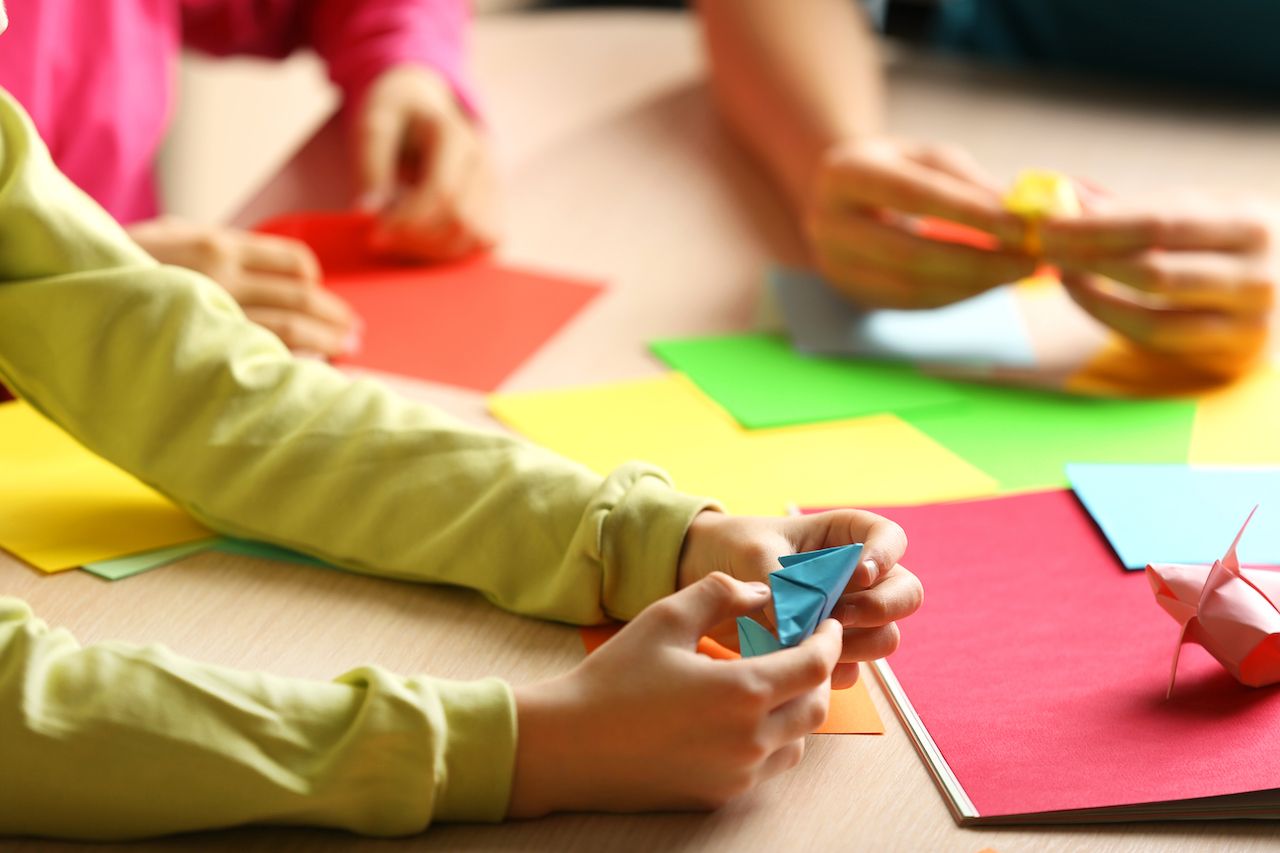 Then comes the best part: When you’ve had your fill of quiet meditation on the roof, descend by slide to the ground floor. You have to take a break at each floor to get on the next section, but you’ll feel as giddy as a schoolchild when you’re at the bottom. An attendant told us that the adults enjoy the slide the most.

Hiroshima is known for its own version of okonomiyaki, in which the ingredients are layered, rather than mixed as they are in the Kansai area. Okonami means “as you like,” and yaki means “grilled.” This is a savory pancake with batter, pork, cabbage, yakisoba or udon noddles, fried egg, sometimes octopus or squid, and sauce. Before WWII, it started out with the name issen yoshoku, or “Western food for a dime.” While you can get it at many places in Hiroshima, why not visit the food-themed, four-story Okonomiyaki World? Choose from 24 restaurants, each putting their own spin on this local dish. 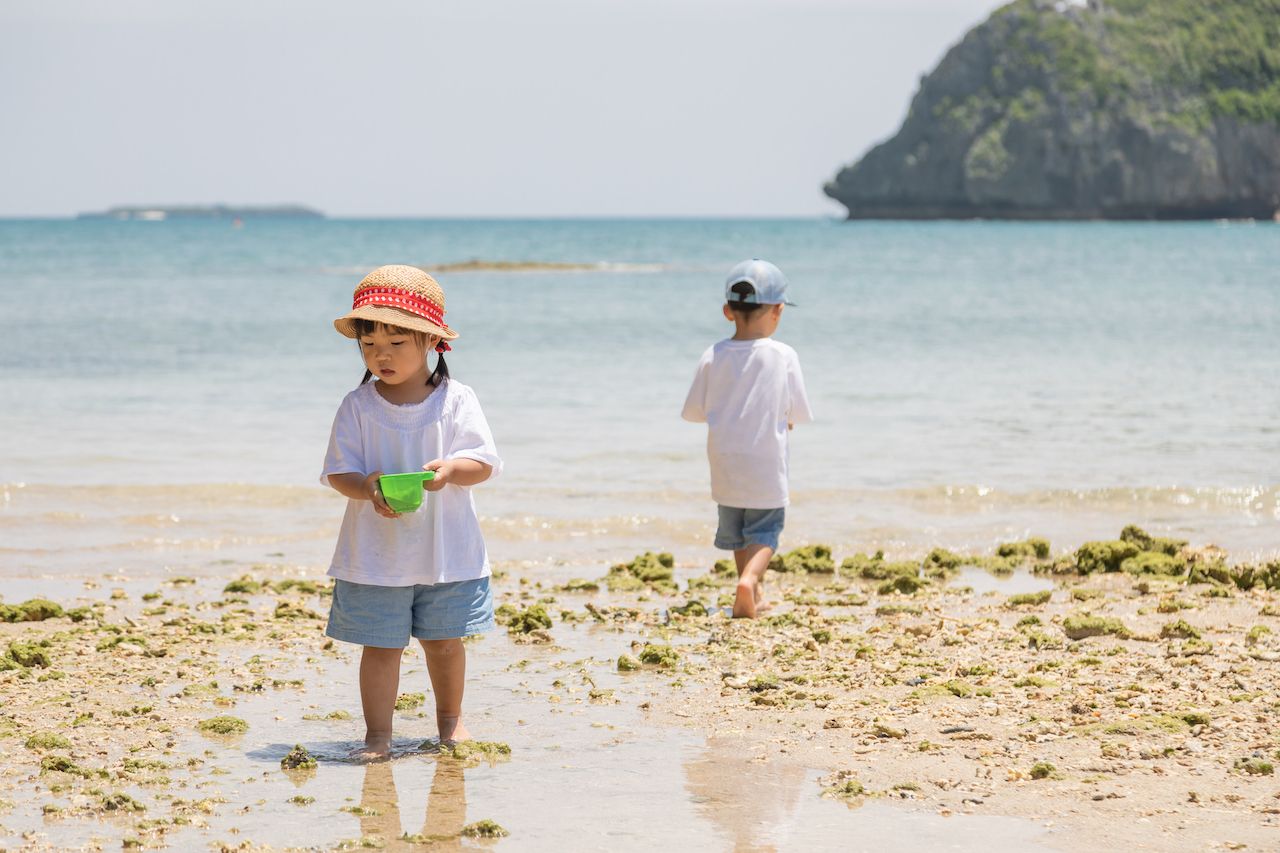 Part of Japan for just 135 years, Okinawa, the southernmost prefecture, has a culture of its own — one much more laid-back, which perhaps explains Okinawans’ renowned life spans. Long influenced by other cultures, including China and Thailand, Okinawa is also more tolerant of foreigners. And its nature is astounding. Almost 20 percent of the prefecture is designated as “natural parks,” including a national park and a quasi-national park.

If your kids loved the monkey park, they’re going to be overjoyed when they get the chance to monkey around themselves at Forest Adventure Onna, with a number of adventure courses, including zip lines and suspended bridges. Built by the French company Altus, these courses provide an opportunity for the kids to experience a natural forest, and not a constructed, Disneyland-type ride.

You might be surprised to hear that the islands of Okinawa are surrounded by great coral reefs, with 200 of the world’s 800 species in existence, offering a terrific location for snorkeling and scuba diving. There are even private, English-language scuba diving tours which will film you with a GoPro down in the famous Blue Cave. Tours are available for visitors from 10 to 60 years old, so maybe the grandparents would like to help out with this one while the parents enjoy their own adventure. 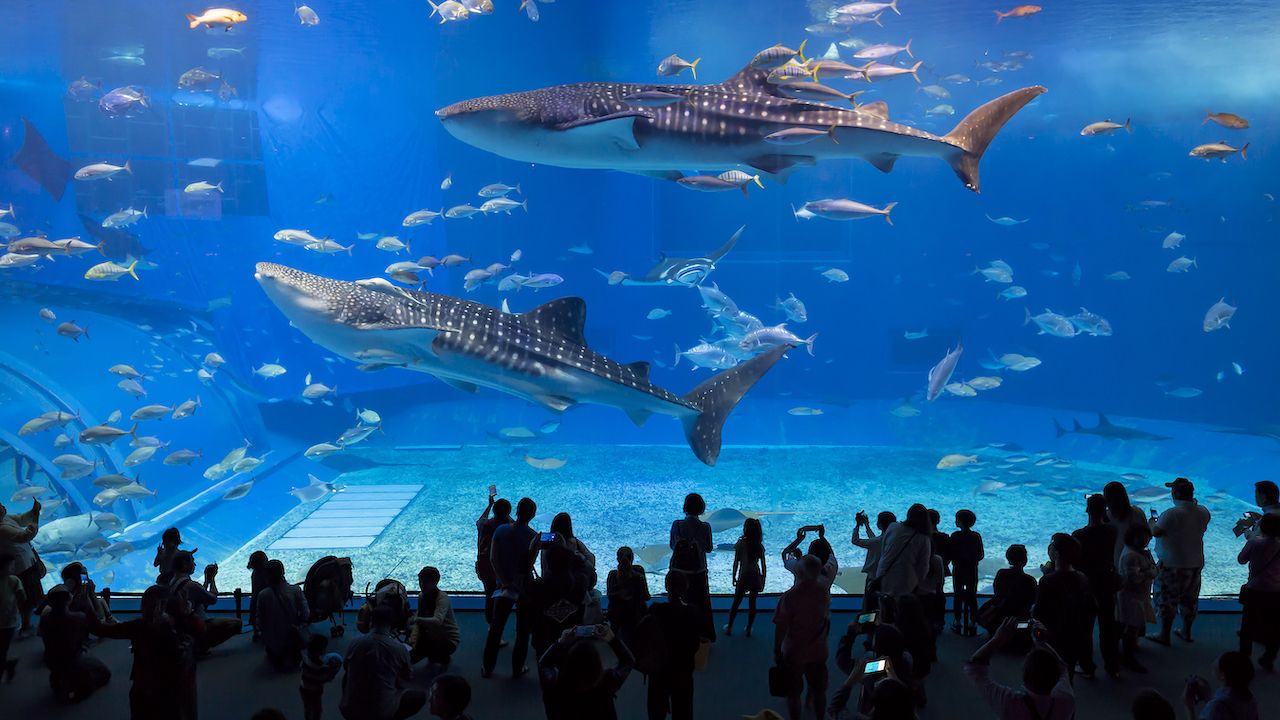 To finish off your Okinawan nature experience, visit the spectacular Churaumi Aquarium (one of the largest in the world), where hands-on exhibits of the shallow water known in Okinawa as “Inoh” present sea cucumbers and starfish common to the islands. The aquarium is part of the Ocean Expo Park, a complex that includes a tropical and subtropical arboretum. Focusing on education and preservation of our seas and rivers, the Churaumi Aquarium introduces visitors to the local environment, including 70 types of coral and 740 species of fish.

Trip PlanningThe Most Kid-Friendly Destinations in South America
Tagged
Trip Planning Japan
What did you think of this story?
Meh
Good
Awesome