Korean food is growing in popularity in the West. Kimchi is being integrated into burgers, fries, nachos, and more. Korean barbecue is far from a foreign concept. But those foods are just the tip of the iceberg.

South Korea’s coast has countless fishing villages and fish markets brimming with sea urchins, conchs, abalone, octopods, and gaebul (a type of marine worm). Seafood and seafood products like fish sauce are incorporated into many Korean dishes, including soups, stir fry, fish cakes, and kimchi. Seaweed (kim or gim) is eaten almost daily in various forms. This sea-inspired cuisine tends to be on the salty side, and almost always has a spicy kick. If shellfish and crustacea are not your thing, don’t despair. Beef and pork are readily available.

Needless to say, there’s a lot of different foods to try. These are the need-to-know foods that will have you wondering about why you haven’t done a food tour through Korea yet. 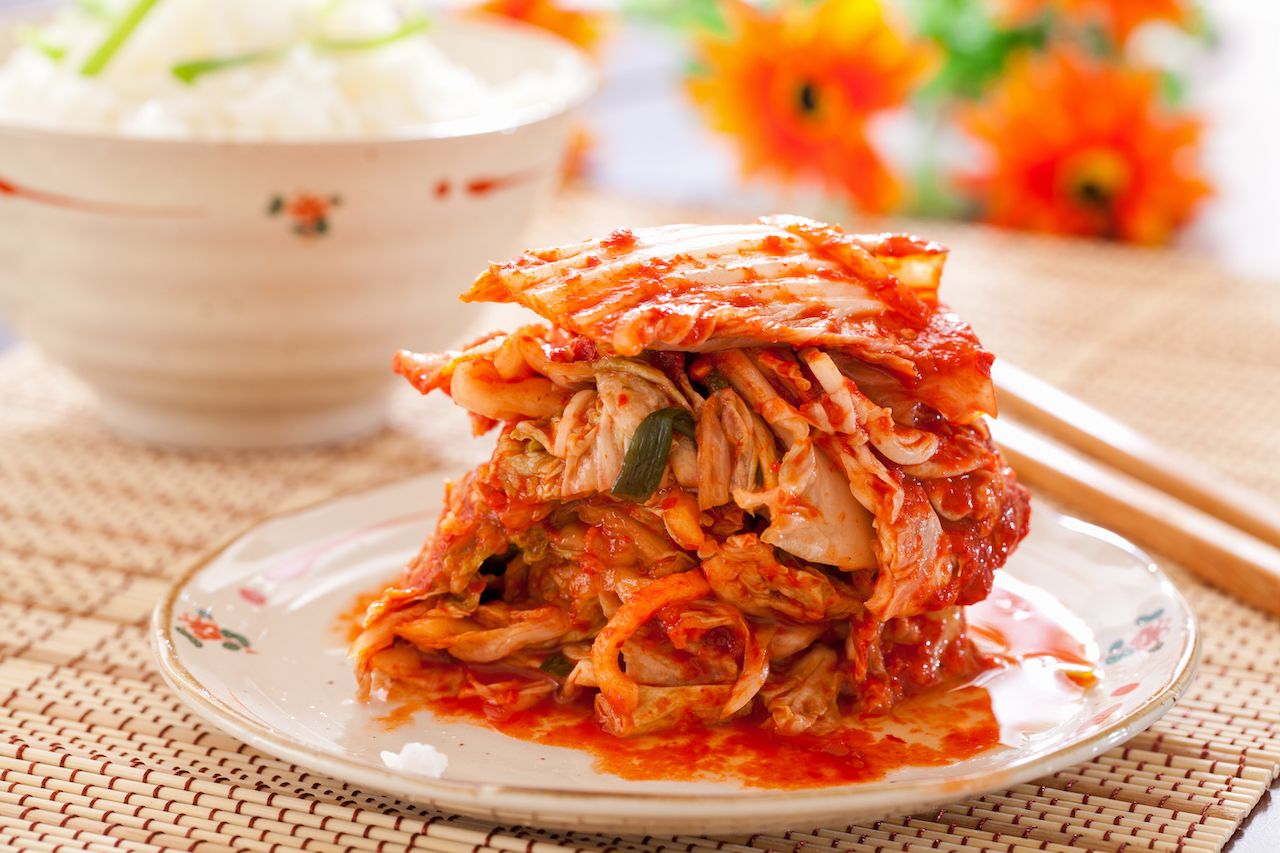 Kimchi has long been a staple in Korean cuisine. Case in point: there’s an entire museum dedicated to it in Seoul. Kimchi is fermented cabbage that’s been rubbed with fish sauce, pepper paste (gochujang), and other spices. It was traditionally made by putting the mixture into clay pots and buried in the ground, but it’s also industrially produced now. Kimchi is sour and spicy, and is eaten for breakfast, lunch, and dinner. While cabbage is the typical main ingredient, it’s common to see variations made with cucumber or daikon radish. 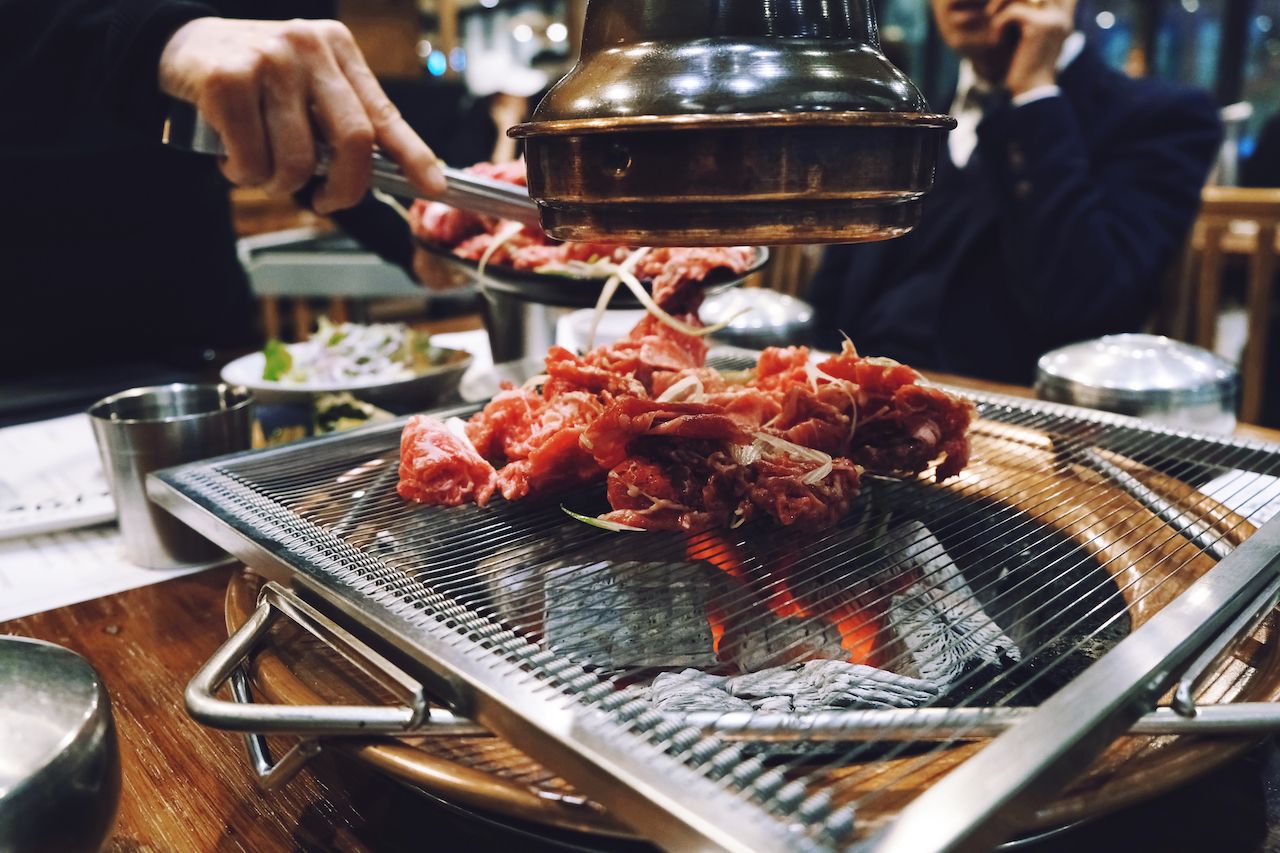 As with kimchi, Korean barbecue comes in many forms. The most common and popular choices are galbi (marinated short ribs) and samgyupsal (pork belly). Barbecue is a communal event, so everything on the table is up for grabs. Orders are made per serving of meat, which is brought to your table raw with onions, mushrooms, and garlic. The meat is cooked on a charcoal grill in the middle of your table and cut into bite-sized pieces. Then, you take a leaf of lettuce and load it up with a little bit of whatever you want. 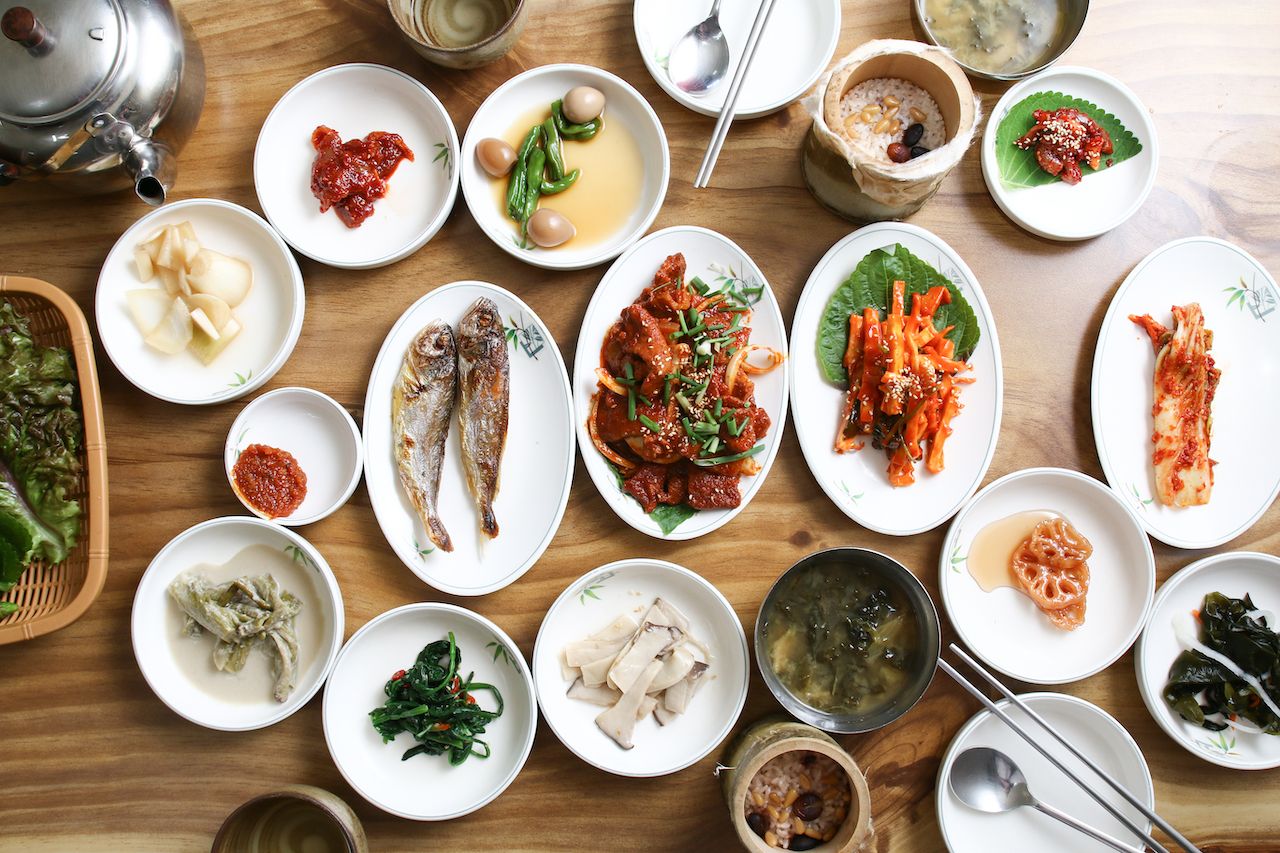 Banchan are side dishes that come with your meal. Depending on the size of the meal, it may just be rice and kimchi. But if you order barbecue or another large meal, banchan could include fish cakes, sauteed spinach, daikon radish, japchae (sweet and savory glass noodles), bean sprouts, fried fish, zucchini, tofu, gochujang, seaweed, and so much more. These sides vary day to day as well as place to place, so it’s always a little surprise. 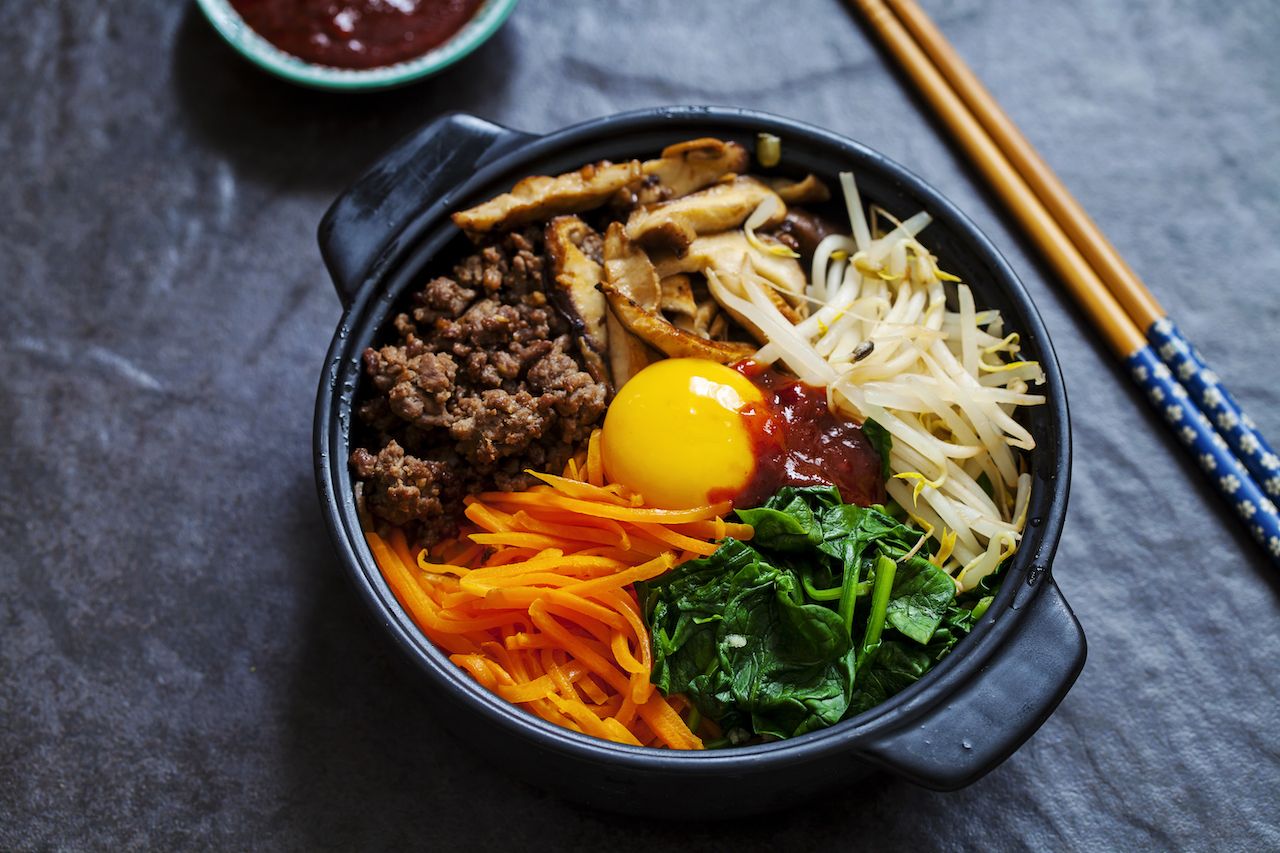 Bap is the Korean word for rice. Rice is served alongside every meal, but a few menu items in particular stand out. One is bibimbap, which is basically a rice bowl, served hot or cold, with a topping of zucchini, carrots, fernbrake, bean sprouts, and often a raw or fried egg. Many add in meat, as well as gochujang, to their liking. 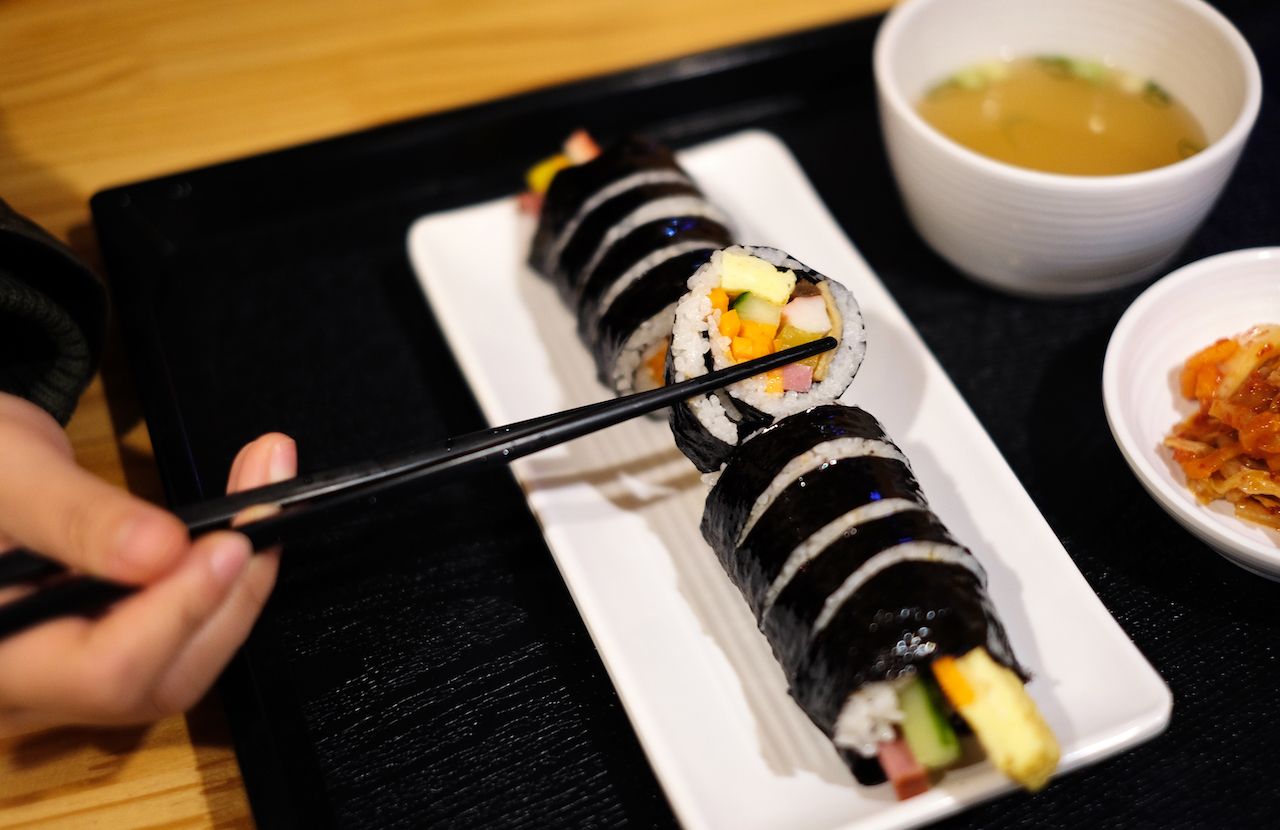 Think of kimbap as a type of Korean sushi minus the raw fish. It’s made in the same fashion with rice and kim, and rolled with ingredients such as ham or crab, egg, carrots, pickled radish, and cucumber. It’s basically the equivalent of a sandwich in that it’s a light lunch or snack that’s easy to take with you. 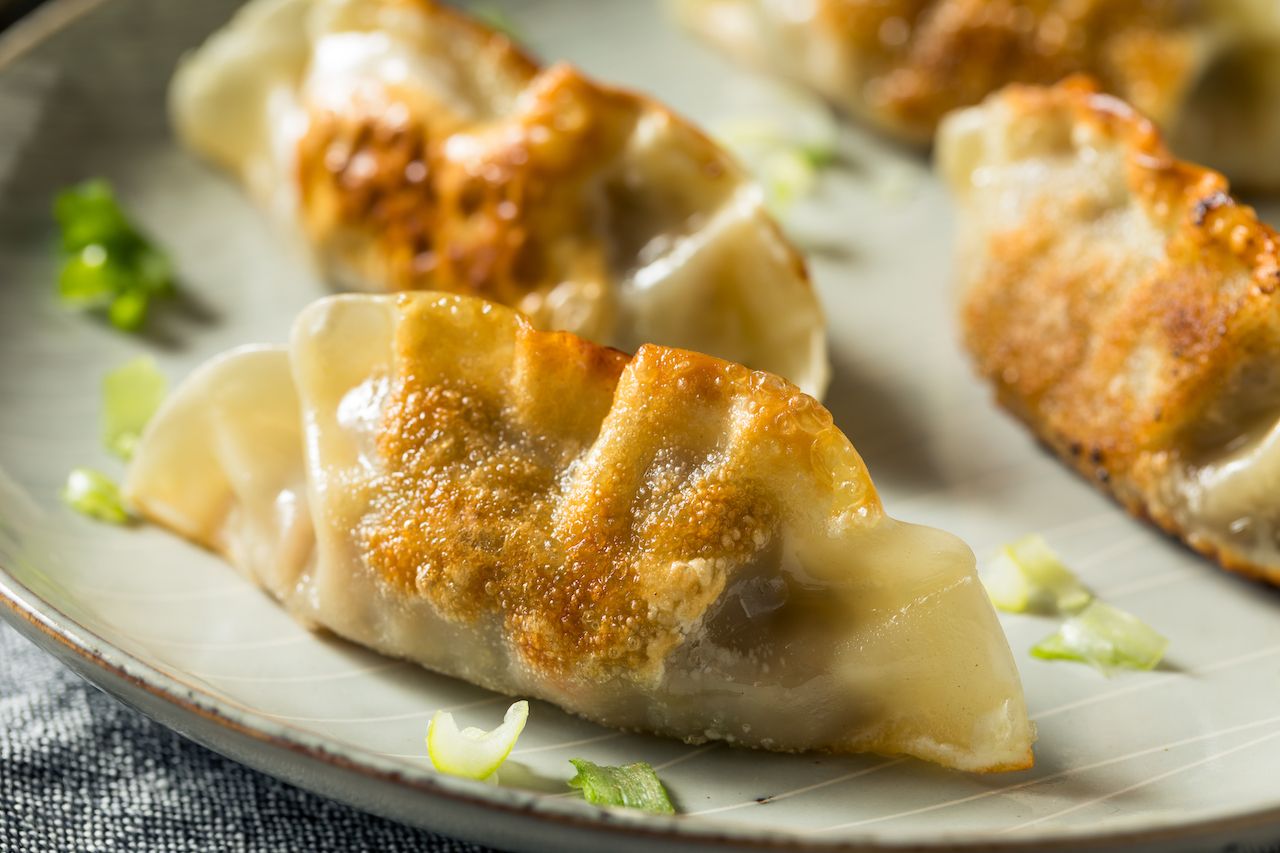 Mandu are similar to potstickers. These steamed or fried dumplings are filled with vegetables, meat, or kimchi. You can order them as part of your meal, put them in soup, or get the big puffy version from a roadside stand. Either way, your stomach will thank you. 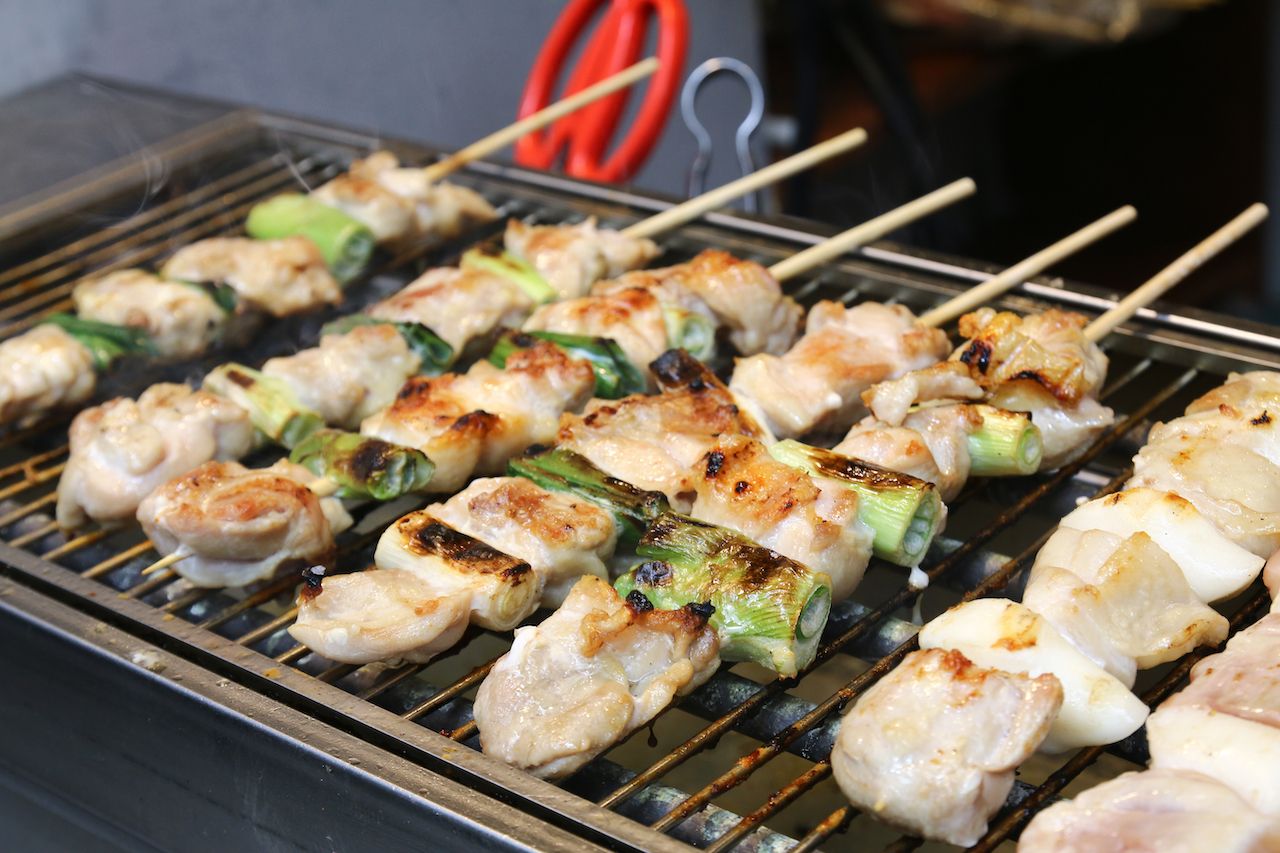 Street food in Korea is extremely popular. School kids gather around food carts in between classes, businessmen duck into pop-up street “restaurants” after work, and people fill up on cheap bites before heading out for a night of dancing. Dakkochi, or chicken on a stick, is one of the most common. It’s coated in a gochujang sauce that’s sweet, savory, and spicy. 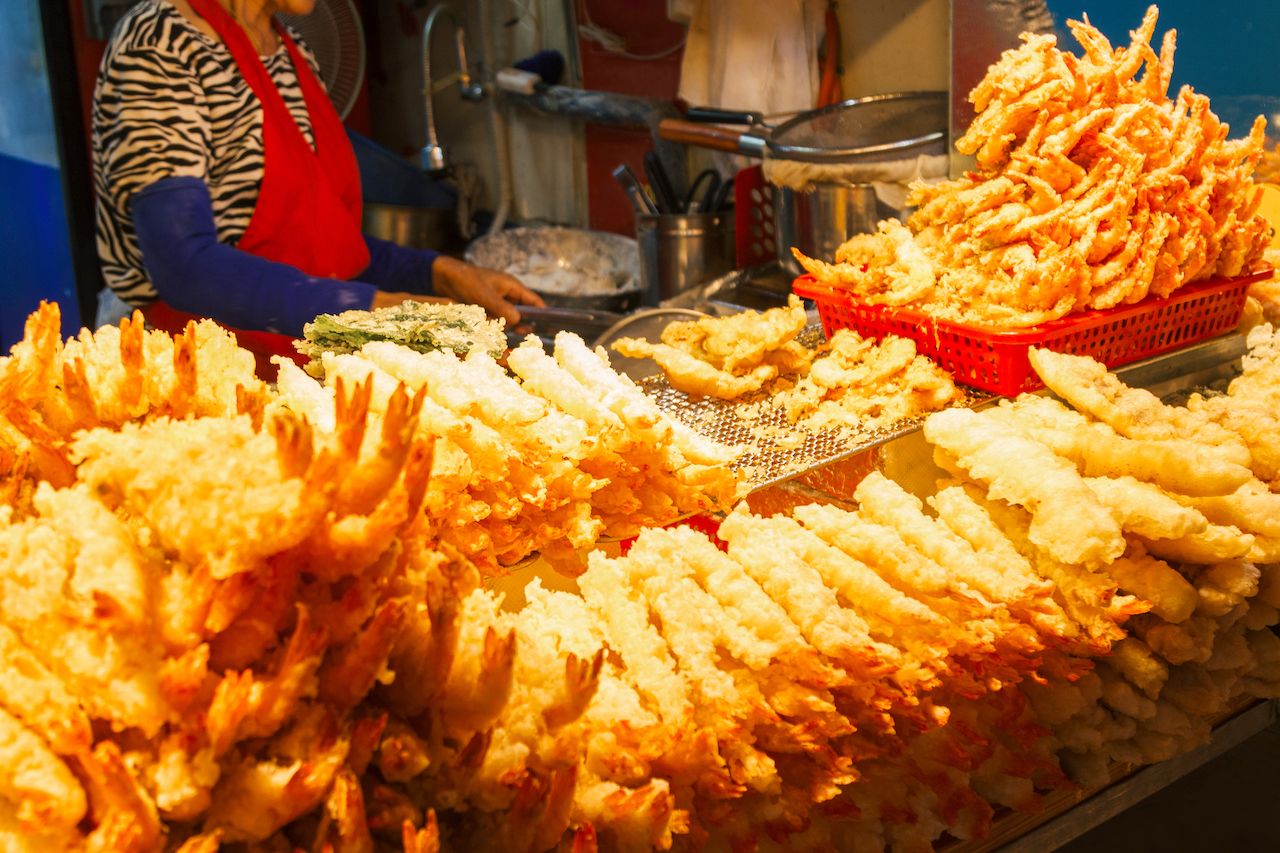 Tempura is a common street food, and it includes everything fried. Nothing says Korean street food like deep-fried squid tentacle. If that doesn’t appeal to you, there are other options to fry, such as sweet potato, onion, vegetable fritters, shrimp, and boiled eggs. Each costs about 500 Korean won, or 50 cents, from a food cart. 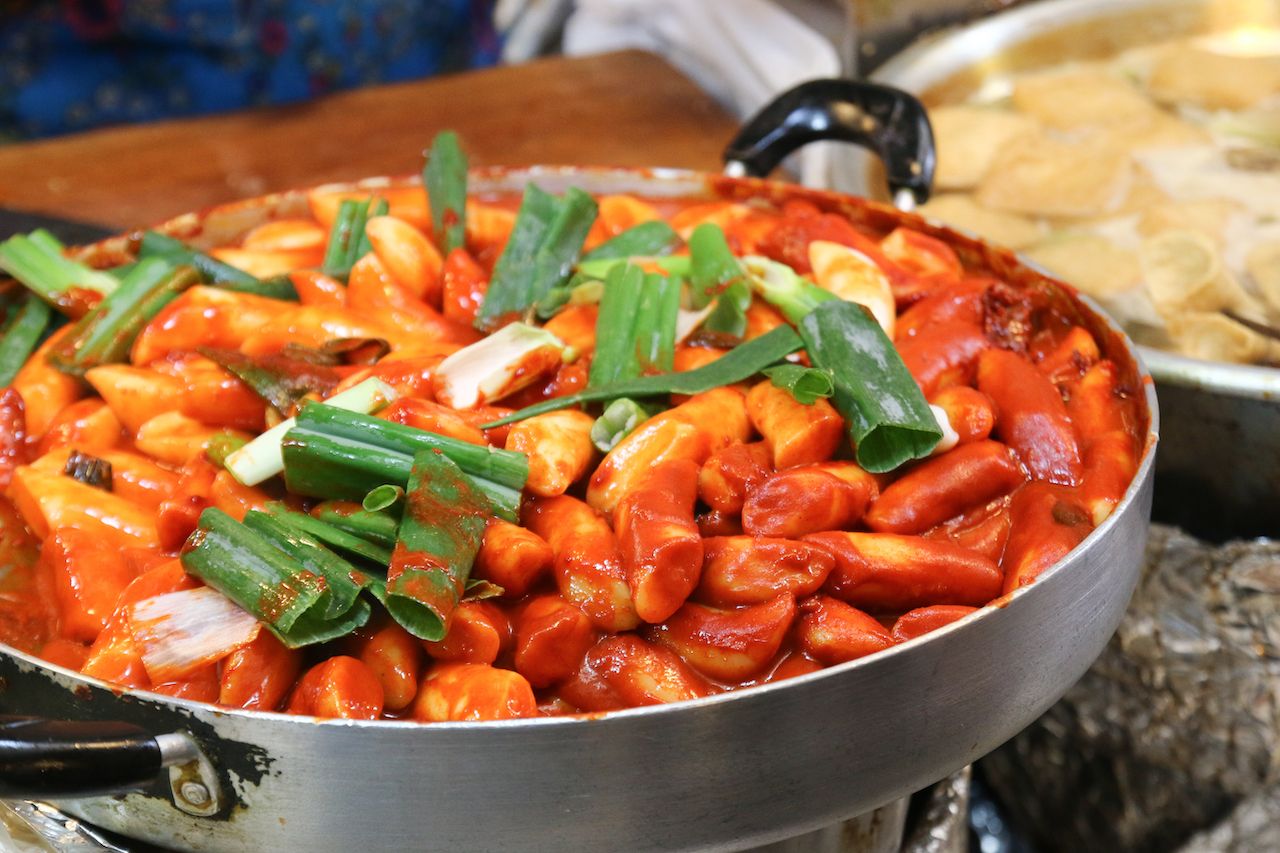 Tteokbokki is a spicy mix of rice cakes and gochujang that’s a common street food snack. It’s often served with a soy-based broth and odeng, a kind of savory fish cake. 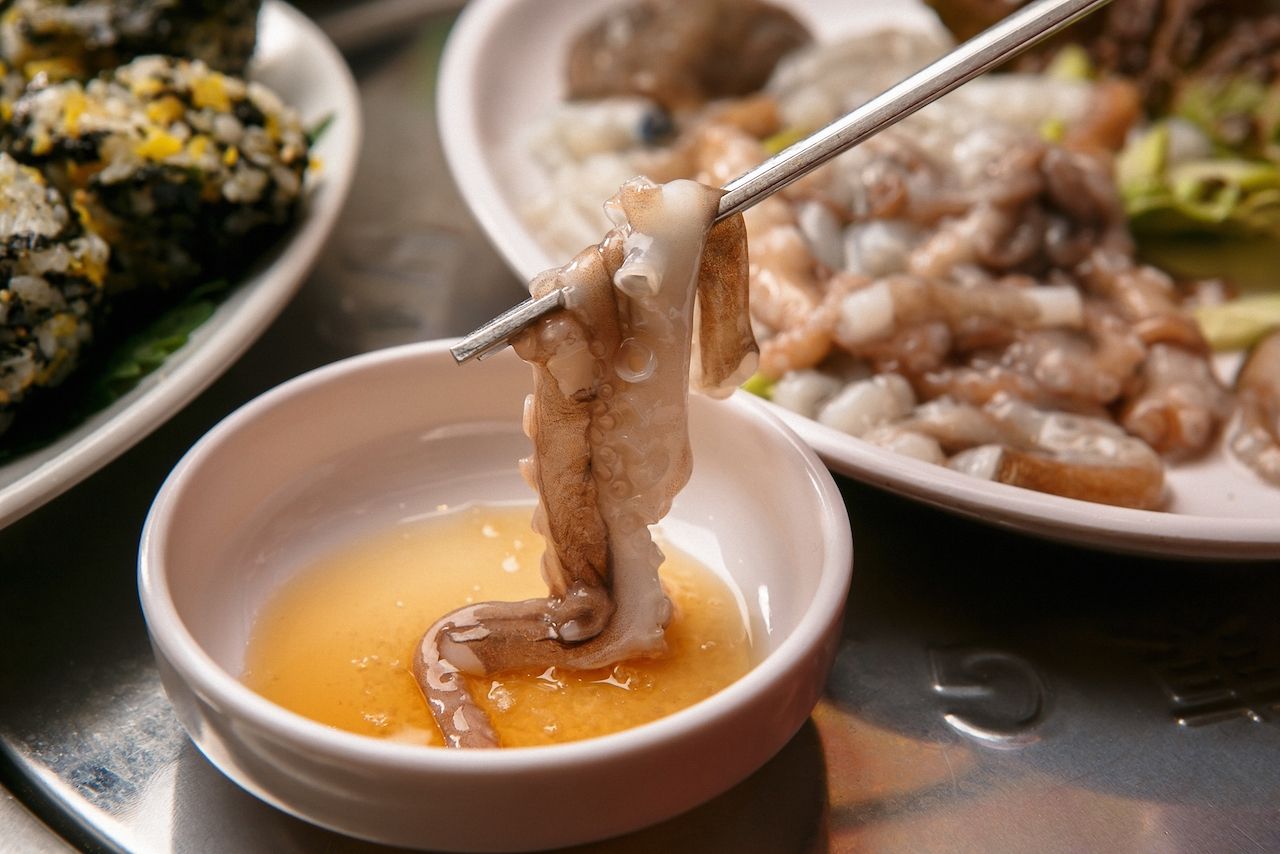 You may be put off by the thought of eating a live octopus, or sannakji. It’s a controversial dish, but it is a classic. Sannakji is a hoe, or raw dish, of small octopus tentacles that are served still wriggling. It’s eaten by itself or with some red chili paste. 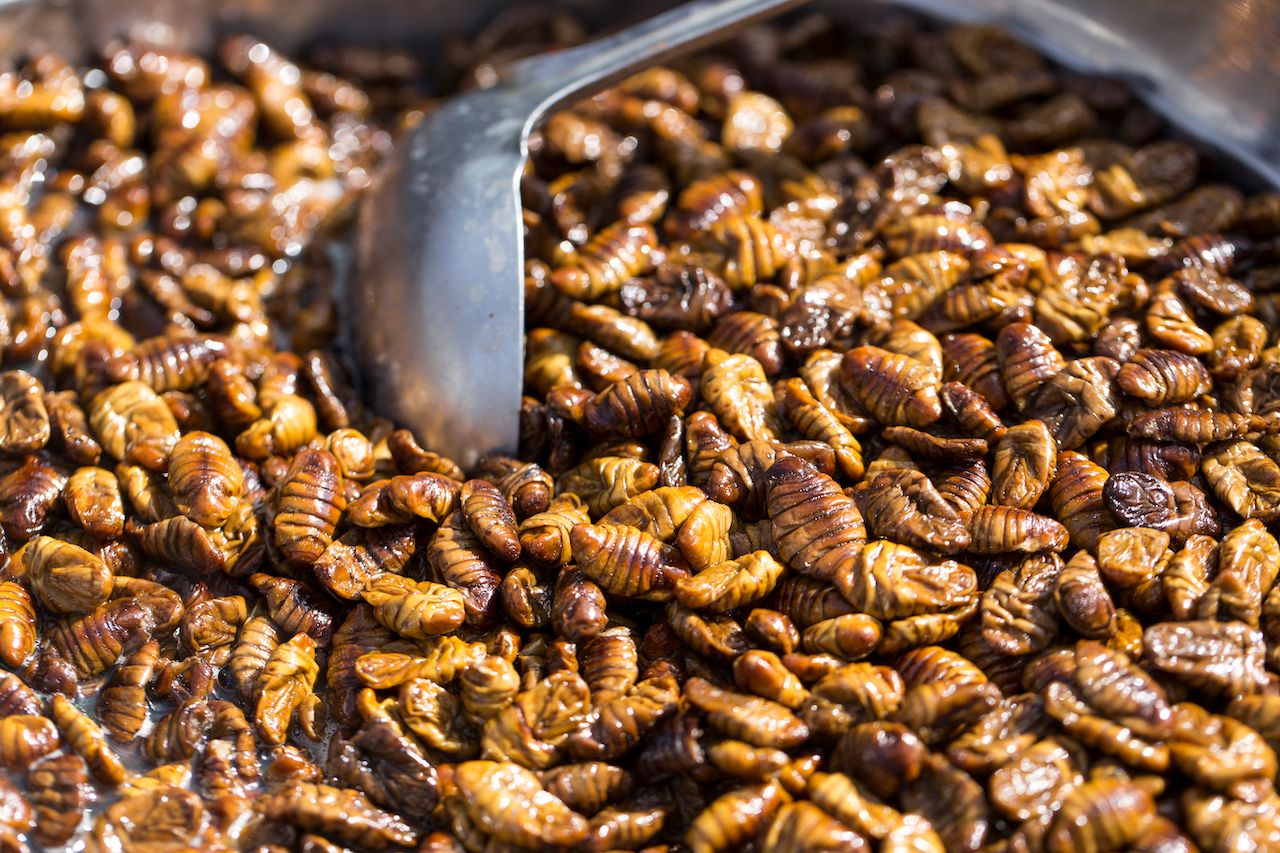 Beondegi is steamed silkworm pupae with a pungent fishy smell that’s typically served boiled or steamed from roadside carts. The popular snack is often spiced, and there’s a candied version as well. The taste is similar to the smell: nutty and fishy. 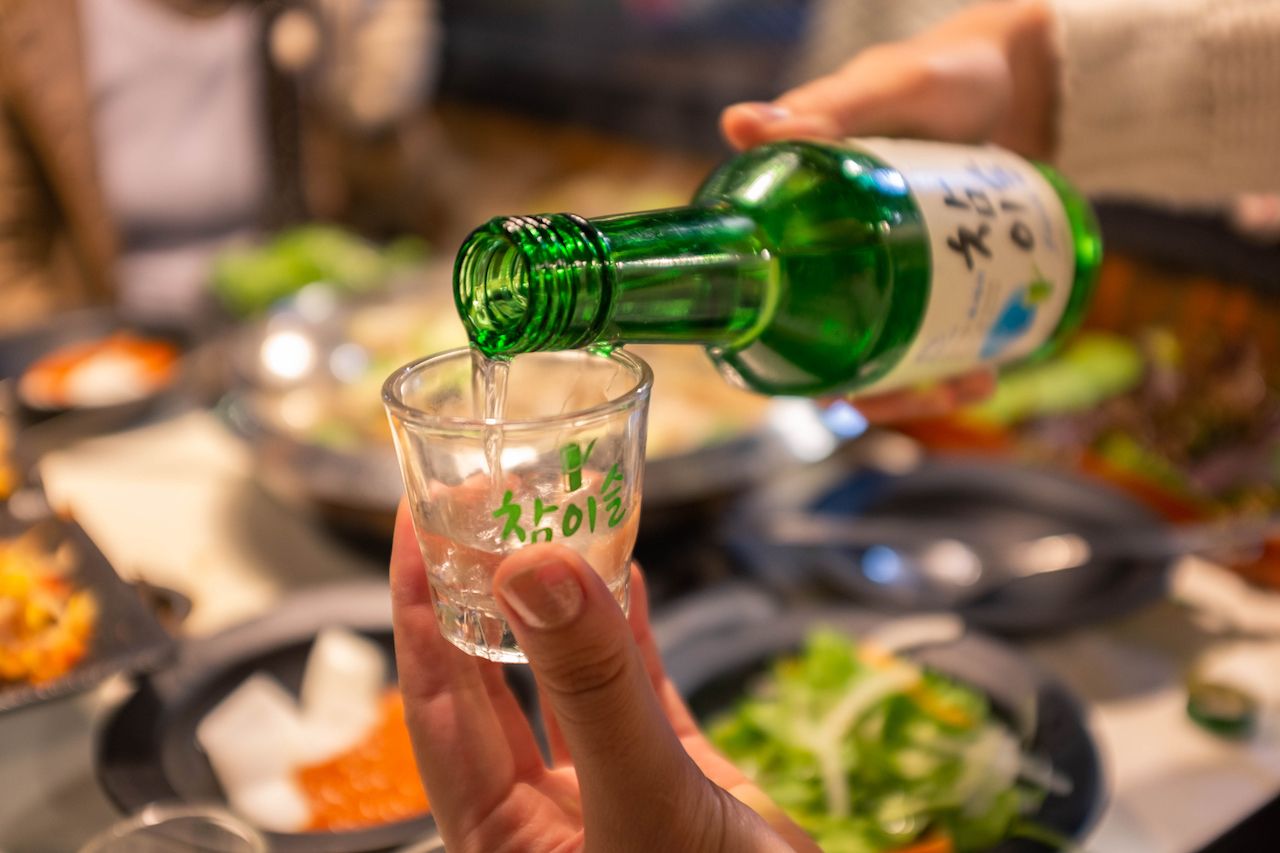 You can’t talk about Korean food without mentioning soju. It’s one of the most popular spirits in the world. It’s traditionally made from rice, wheat, or barley, but there are brands making it from sweet potatoes and tapioca as well. Soju ranges from around 17 percent ABV to more than 50 percent ABV, and one of the most common versions comes in a little green bottle. As with food, soju is a communal drink. If someone else at your table takes a sip, you do too. When their glass is empty, it’s proper etiquette to refill it for them. Because of its mild flavor, it mixes well with almost anything — including beer. When mixed with beer (maekju), it’s called somaek.

Dessert20 Sweet, Chewy, and Colorful Korean Desserts You’re Missing Out On
Tagged
Food + Drink South Korea
What did you think of this story?
Meh
Good
Awesome