Gone are the days when South Korean food in America only referred to Korean barbecue. Bibimbap and kimchi grace menus, and traditional flavors have blended with other cuisines to make a new category of Korean burgers and tacos. Part of that popularity is because Korean food is one of the healthiest cuisines in the world, but one side of the food is still often left out: Korean desserts.

It’s a shame because there’s there are Korean desserts for just about every occasion, whether you want something to warm you up through a harsh winter or cool you down in a blisteringly hot summer. These are the Korean desserts you’ve been missing out on. 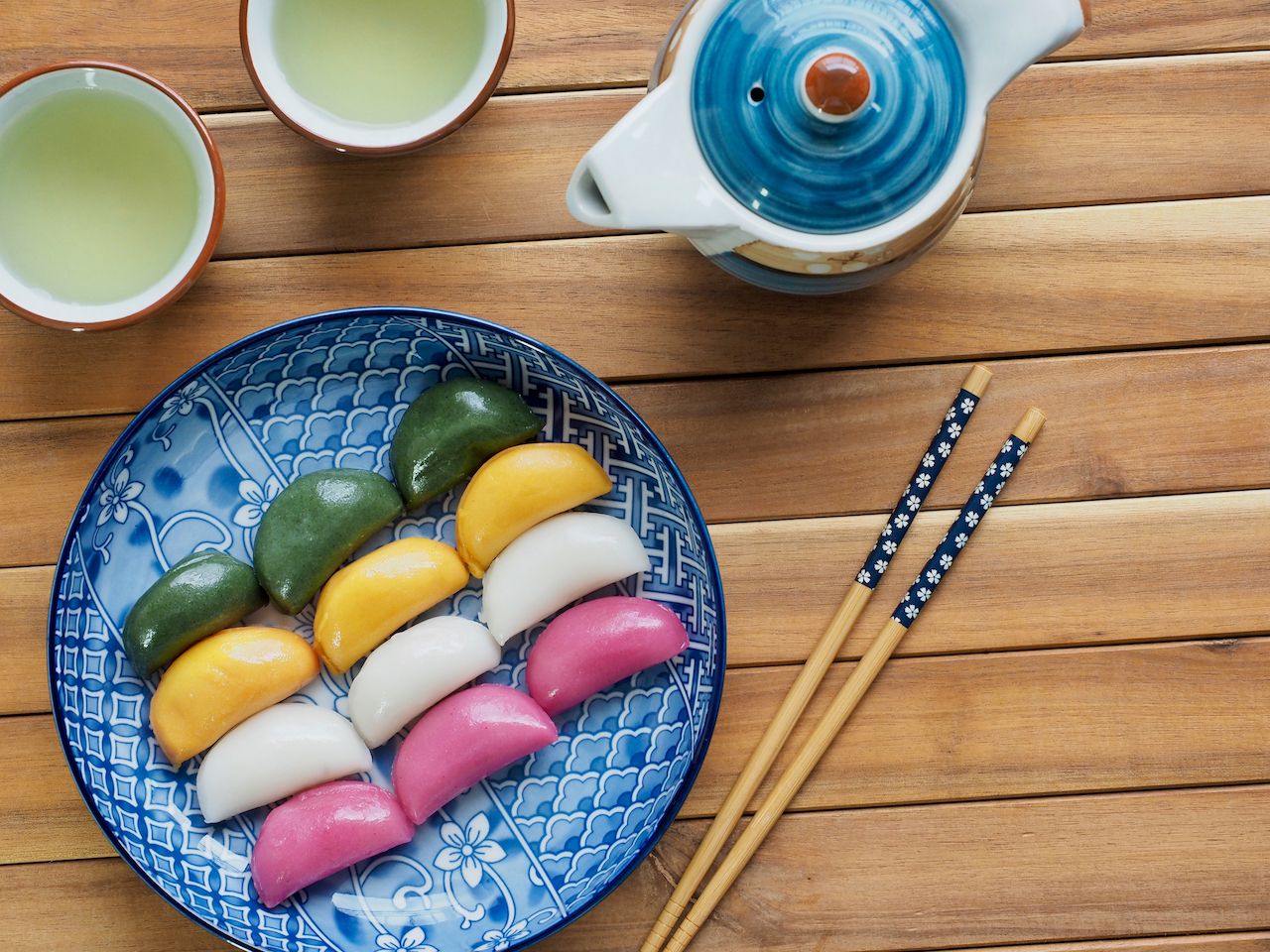 Shaped into a similar half-moon shape as dumplings, these bite-sized packages are made with a rice flour dough shell that’s filled with ingredients like red bean paste, honey, chestnut, and sesame. The dough is often various colors. Songpyeon is traditionally served during the Korean celebration of chuseok (a fall harvest festival that translates to “autumn eve”). The taste is sweet, nutty, and chewy, with a subtle pine tree flavor from steaming the rice cakes in fresh pine needles (the song in songpyeon means pine tree). Songpyeon is one of the Korean desserts that is perfect for anyone who enjoys mochi and chewy desserts. 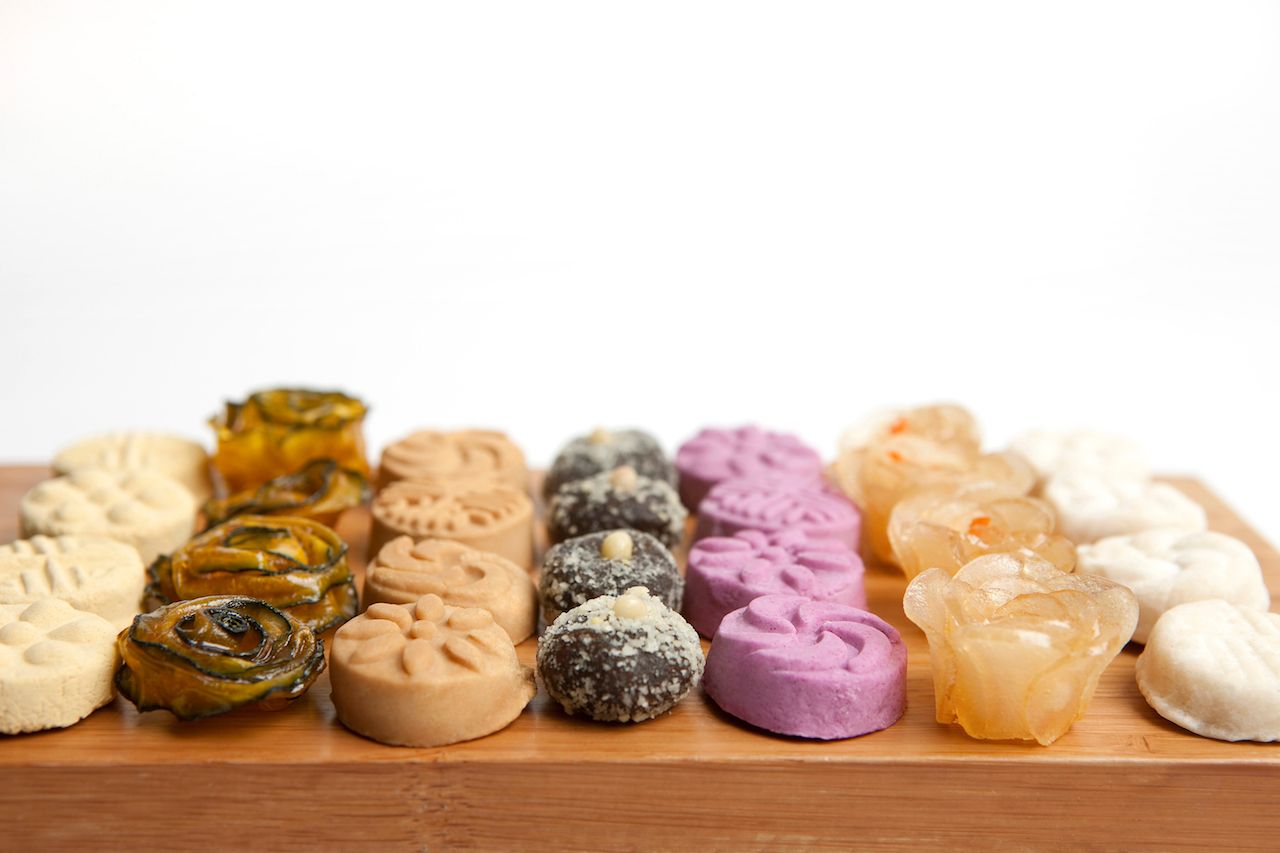 These Korean desserts are delicate patterned cookies look too attractive to eat. Do it anyway. Usually made from rice flour or soybean flour, dasik come in a range of natural colors and flavors and are pressed into a mold to imprint shapes, letters, and flower patterns. The colors generally match the flavor. For example, matcha dasik are green, sesame seed are black, and so on. Typically served with tea, they’re light and not too sweet. The soft texture melts in your mouth. Dasik date back to the Joseon Dynasty (1392-1910) when the cookies were piled high on a plate as an important part of ancestral rites, holidays, and other ceremonies. Different flavors also served as medicine, with the sesame treating food poisoning and the acorn used to suppress a cough. 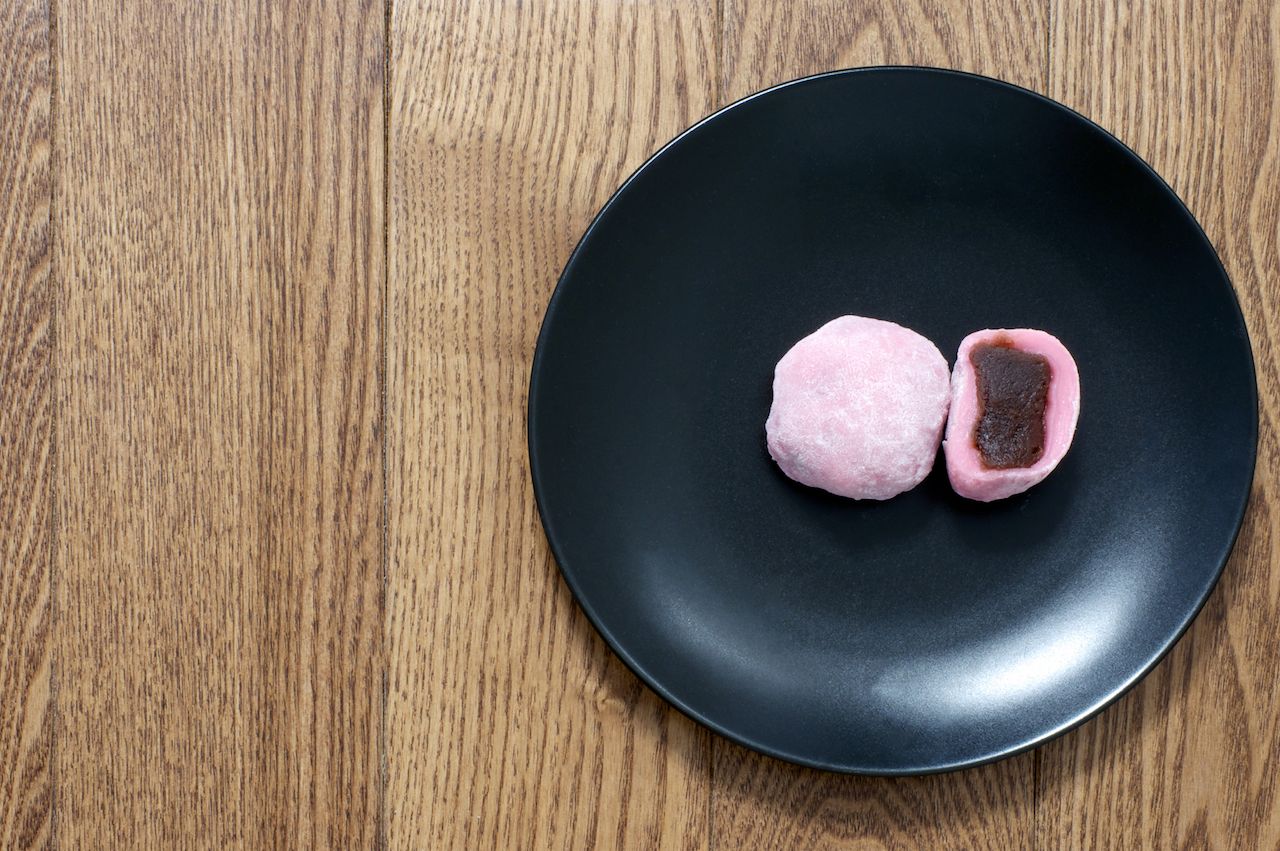 Chapssaltteok is a rice cake made with glutinous rice and is similar to a Japanese dessert called mochi. The popular snack is often given to people taking the university entrance exam to sweeten up what is otherwise a long string of days filled with studying. Chapssaltteok is typically filled with red bean paste or fruit. Extremely thick and chewy, this is a dessert that’ll keep you full for a while. 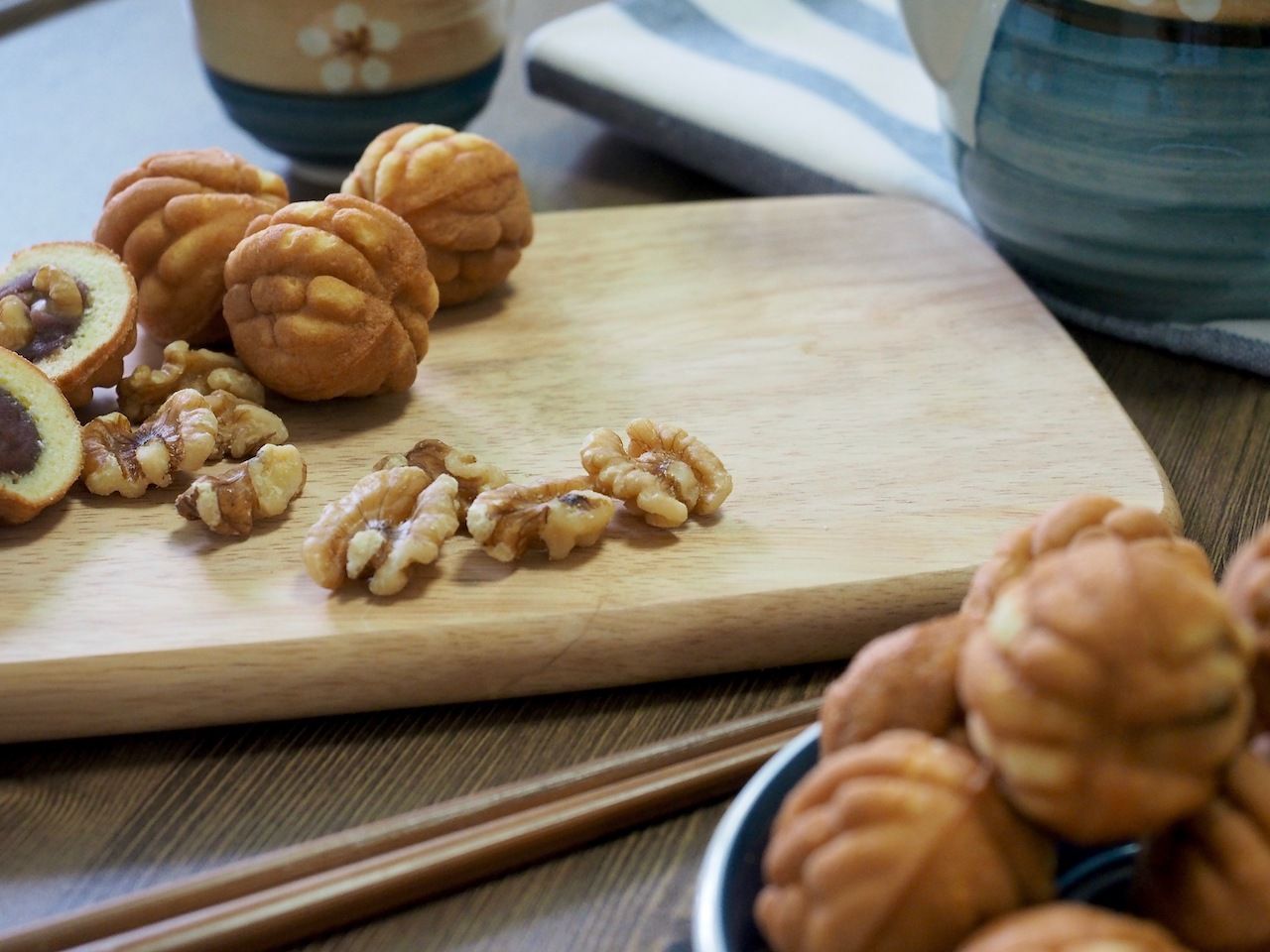 Hodo-gwaja look and taste like walnuts. The outside is a breading made with crushed walnuts and wheat flour that’s similar to a pancake in texture, and the inside has red bean paste and more walnut. A couple, Jo Gwigeum and Sim Boksun, first created hodo-gwaja in 1934, and they’ve slowly become a favorite in Korea. Hodo-gwaja are best served eaten hot — particularly with a hot drink alongside it. 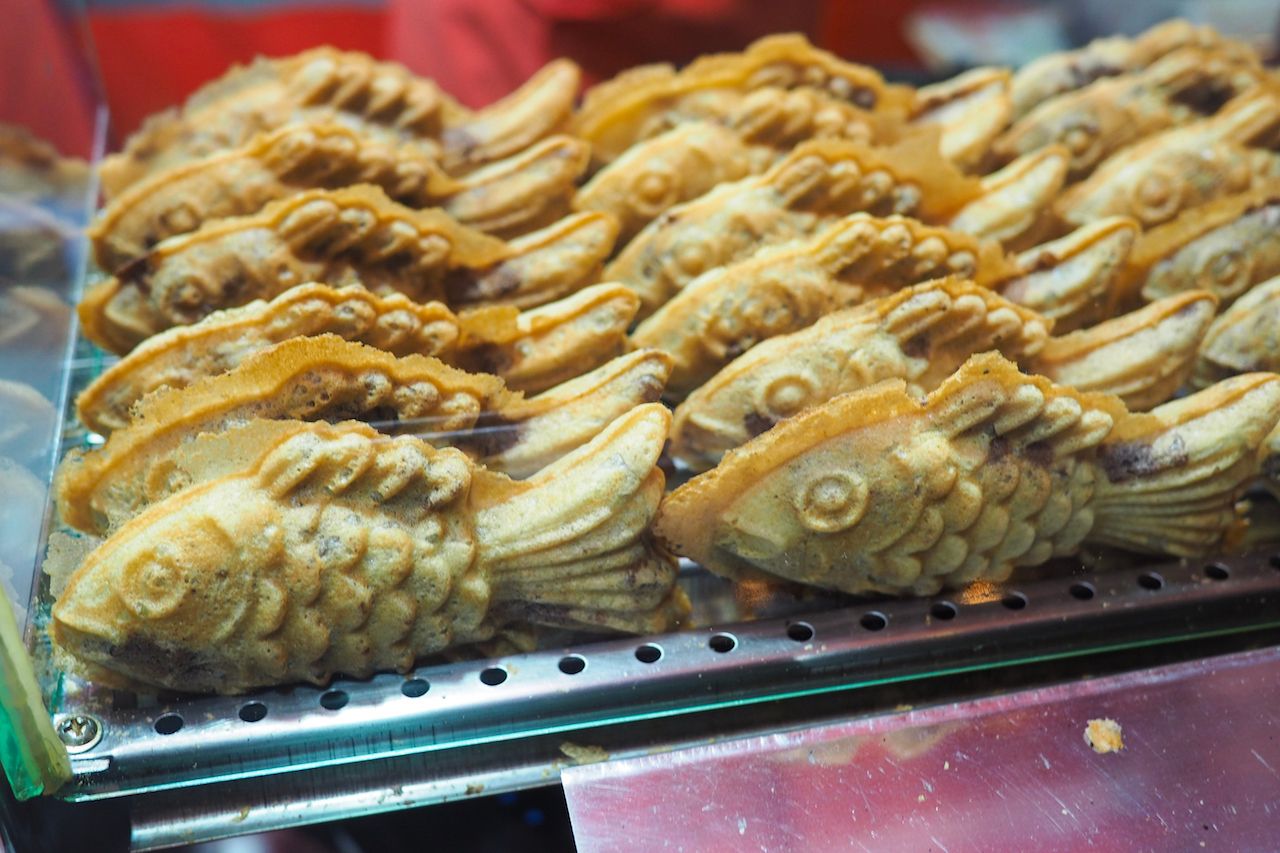 Bungeoppang translates to “carp bread.” The name doesn’t disappoint. The treat is fish-shaped and somewhat like a cross between a waffle and a pancake that’s filled with red bean paste. Other fillings include custard, sweet potato, and if you’re on Jeju island, cheese. The street food is popular in the winter in Korea, where you’ll find stalls selling bungeoppang cooked in little fish-shaped molds. They are crispy on the outside and soft on the inside — perfect for an on-the-go dessert. 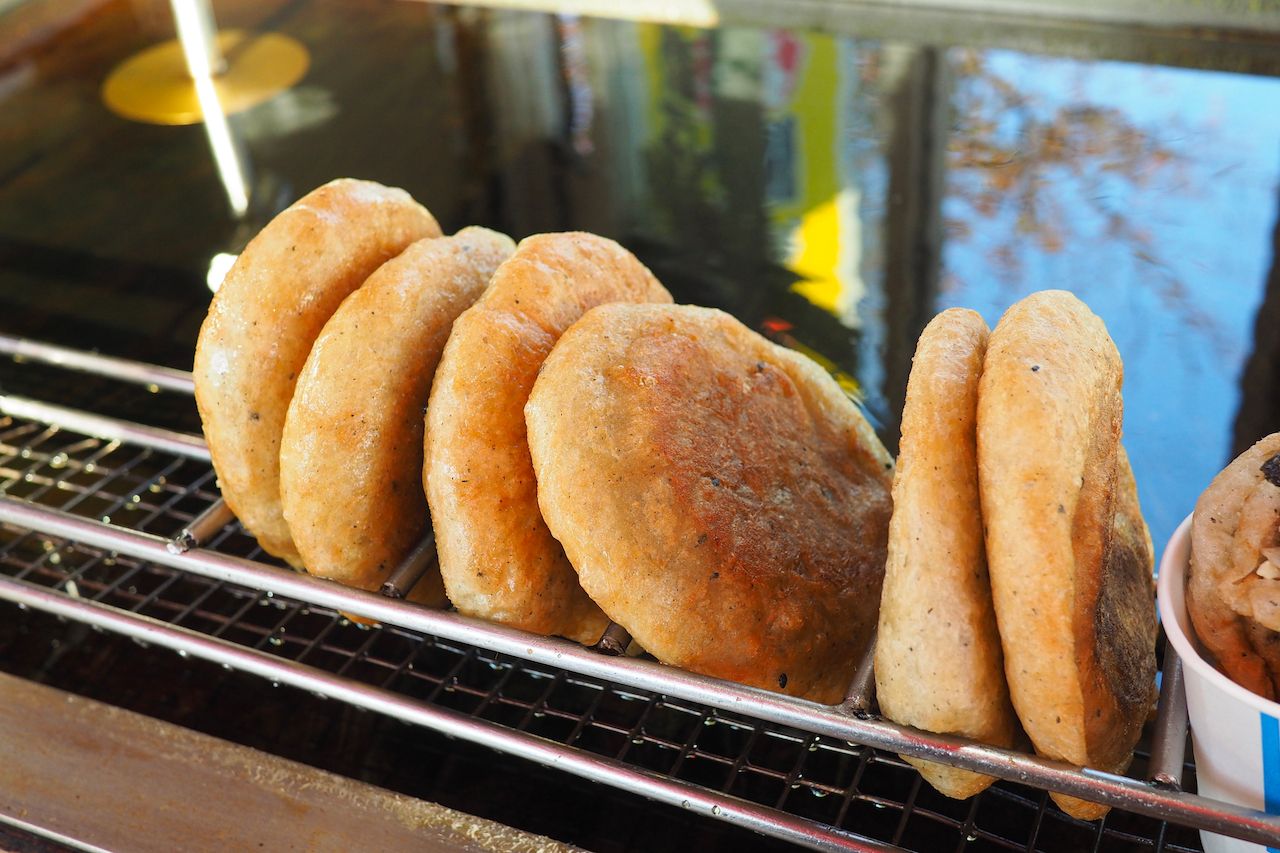 Where North America has hot cakes, Korea has hotteok. The pancake-looking dessert is filled with honey, cinnamon, and nuts. Popular in the winter, hotteok have a crispy outside and chewy inside that’s slightly crunchy and syrupy. Eat them straight out of the pan for the best experience. 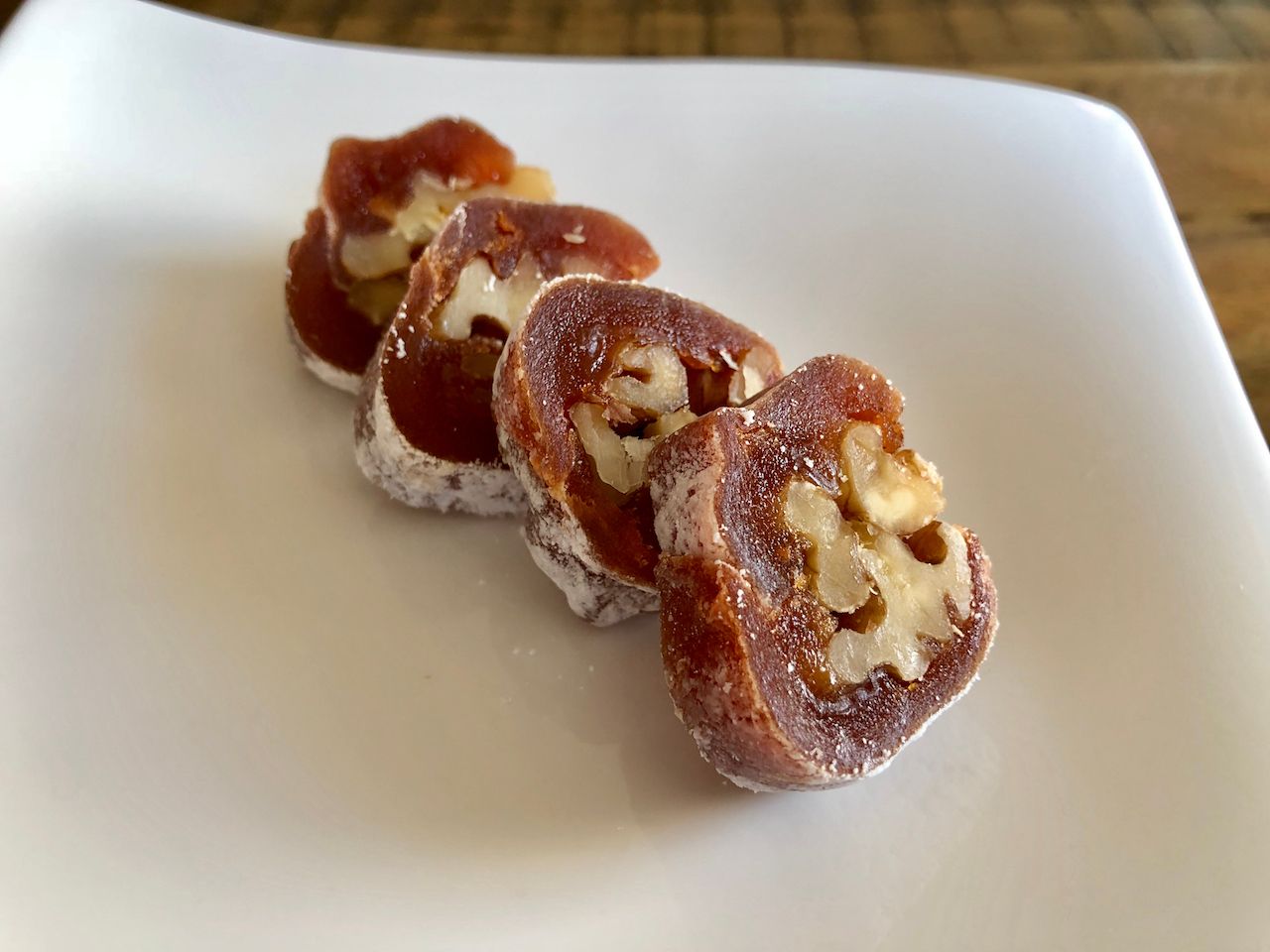 Fruit is the key element in gotgamssam. The treat is made with a walnut that’s wrapped in a dried persimmon. Some of the sweeter versions are smothered in honey. The whole thing is thinly sliced and served alongside tea. 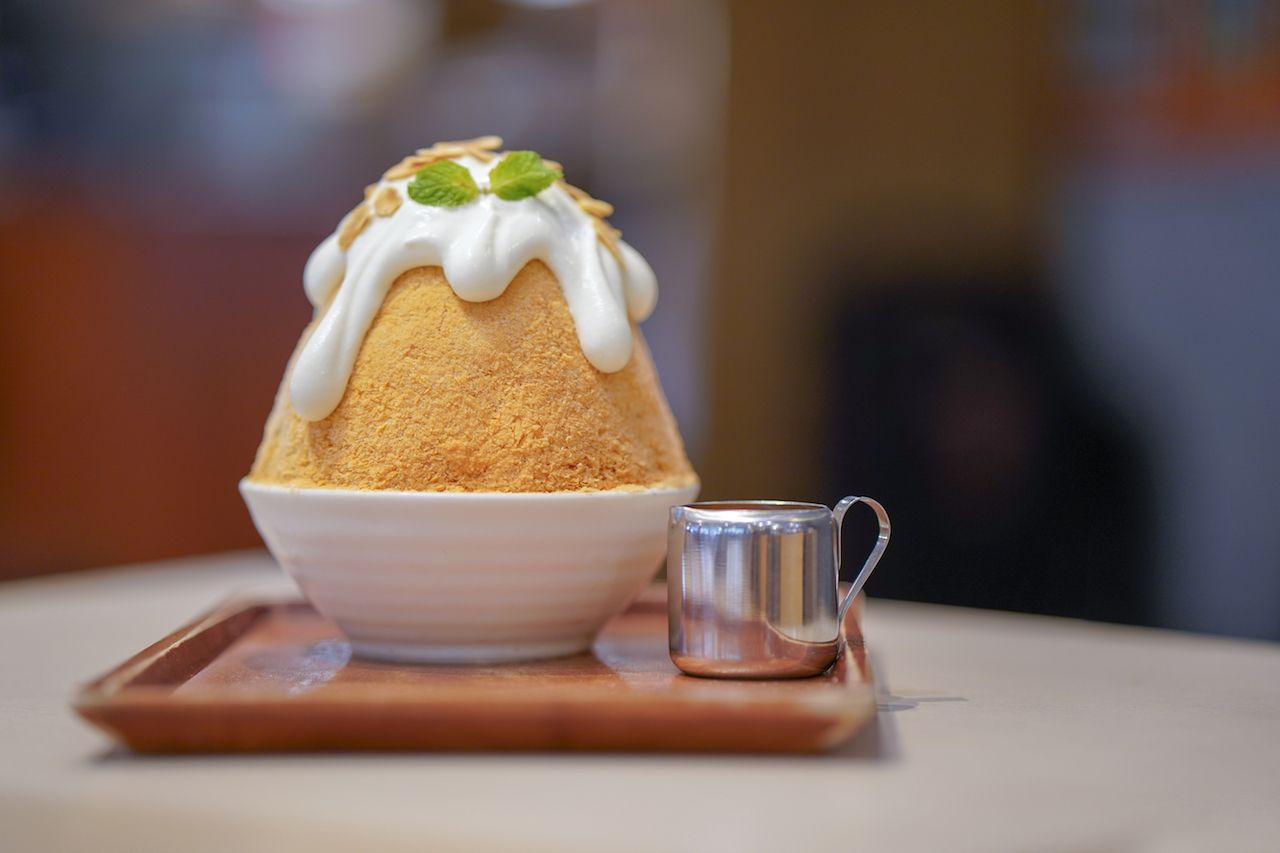 Easily one of the most popular Korean desserts outside of Korea, bingsu, or shaved iced, is the crowning glory of desserts to rescue you from a scorching summer day. It’s made up of a large portion of shaved ice that’s topped with sweetened condensed milk, syrup, and classic toppings like red bean, mango, or green tea. Simple bingsu is served up in a cup while more elaborate affairs come in half of a watermelon or coconut. It’s a lot to take on at once, and sharing is perfectly acceptable. 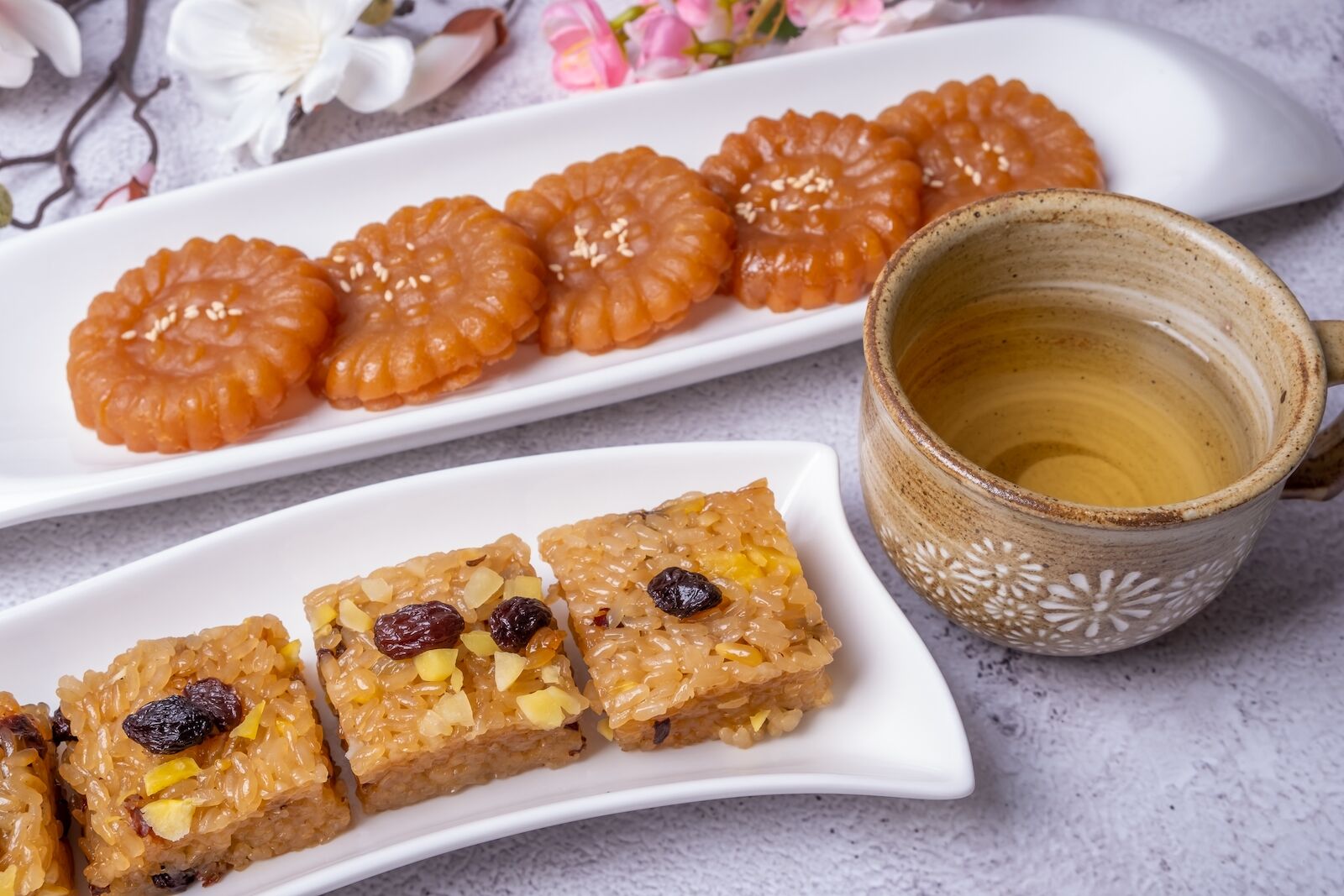 Yaksik is a rice cake made from glutinous rice. Yaksik is sweetened with honey and decorated with pine nuts, chesnuts, and dried fruit, like raisins. The texture of yaksik is sticky, and it has a slightly salty flavor from the nuts and sesame oil. 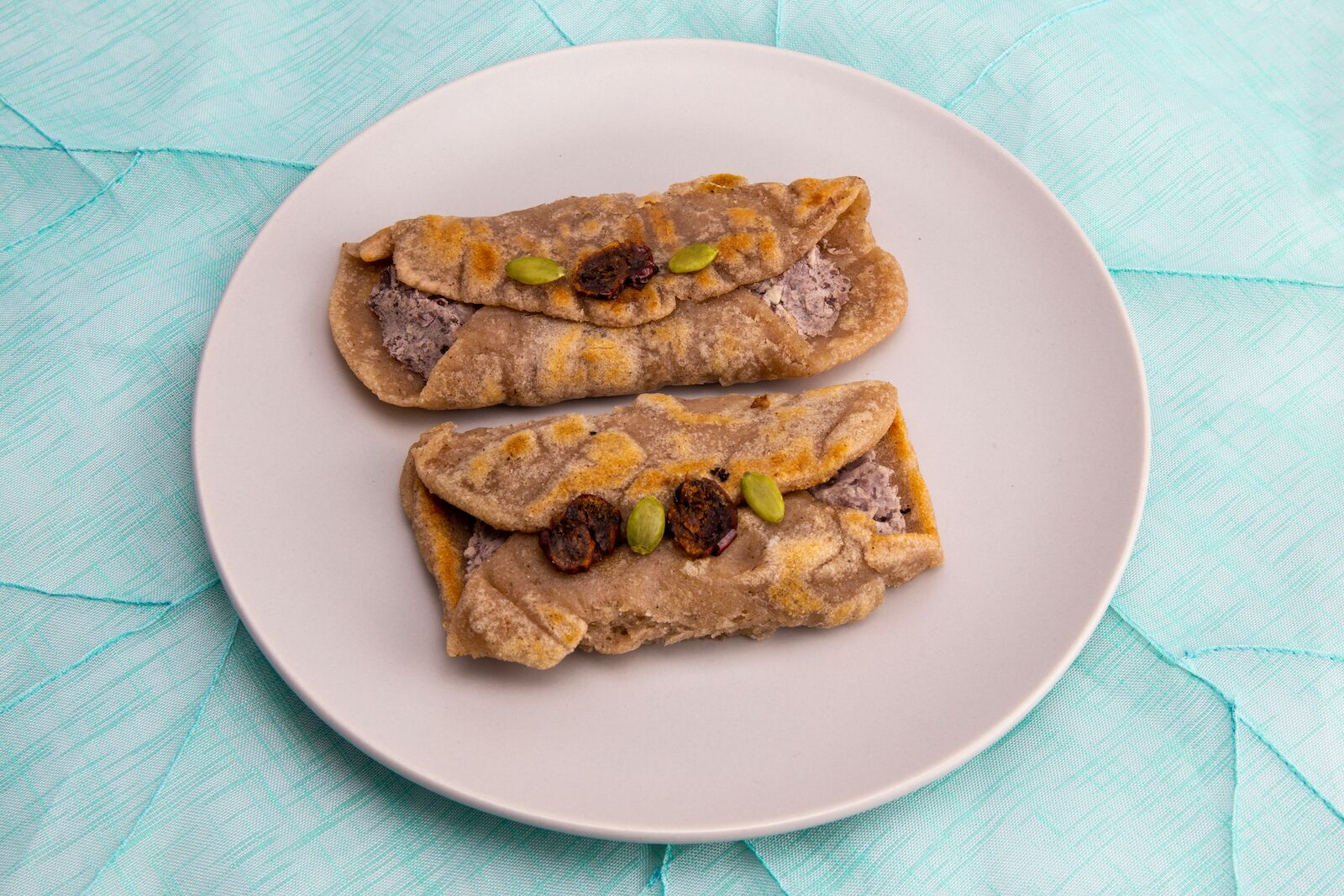 Bukkumi are pan-fried rice cakes, called tteok, which are filled with sweet bean paste. The half moon shaped rice cakes come from Gangwondo province of Korea, and can also be found with a chestnut or mung bean paste filling. The chewy rice cakes are garnished with pumpkin seeds and red dates, known as jujubes. 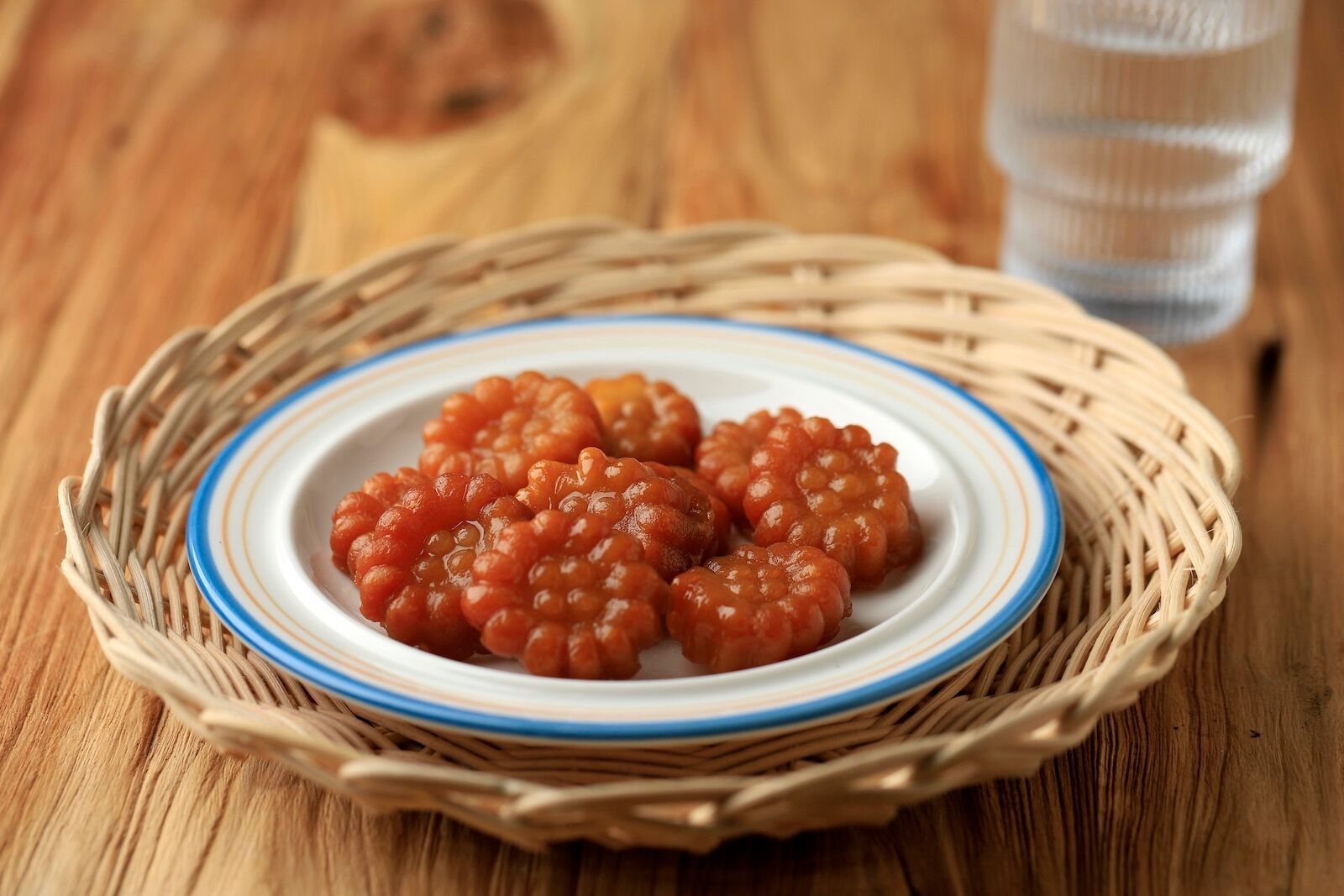 Yakgwa are a honey-flavored pastry, which usually takes the form of a cookie. Yakgwa are cut into the shape of flowers or diamonds and deep fried, and then garnished with chopped pine nuts. The cookies get their signature flavor from a honey and ginger syrup in which they are dipped. Typically, yakgwa are enjoyed as a dessert in Korean tea houses. 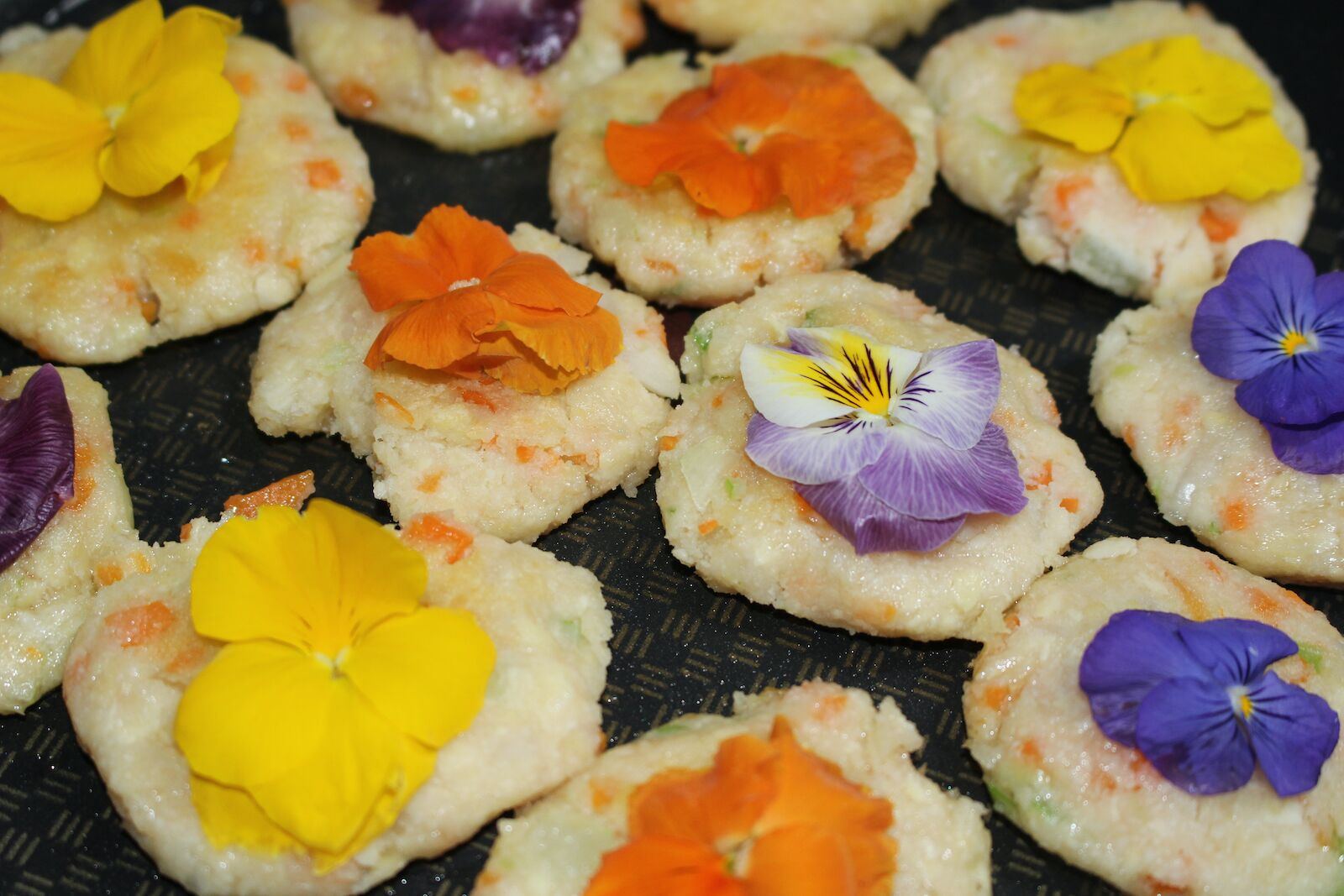 Hwajeon are pan fried rice cakes adorned with edible flowers. These pretty treats are often decorated with azaleas in Korea, and are sweetened with honey. This dessert is most commonly prepared in the spring time, when flowers bloom. 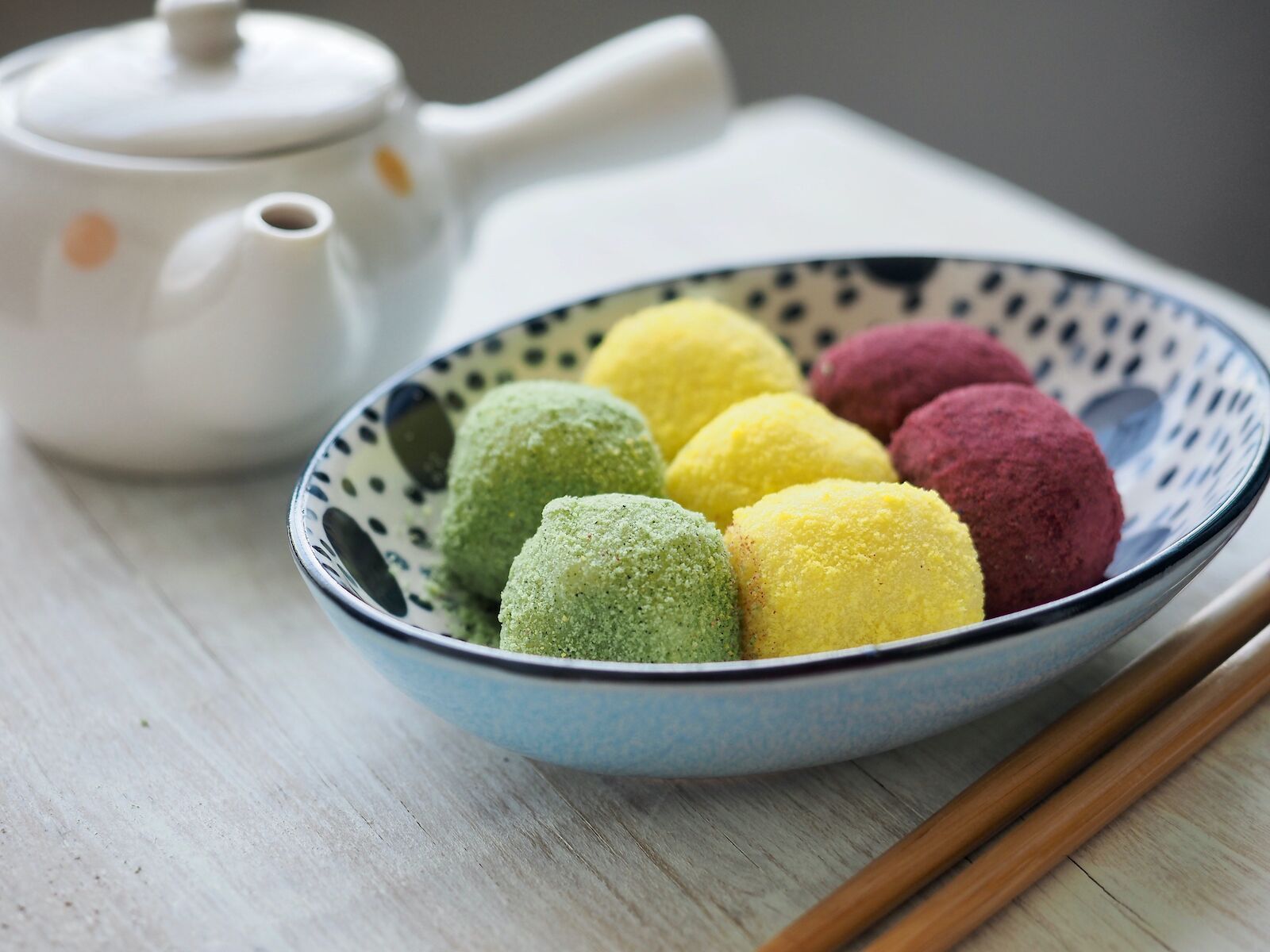 Gyeongdan are another type of tteok, this time in a ball shape.The rice balls are sweetened with honey, then coated in crushed red beans or mung beans. Toasted sesame seeds are another common coating. 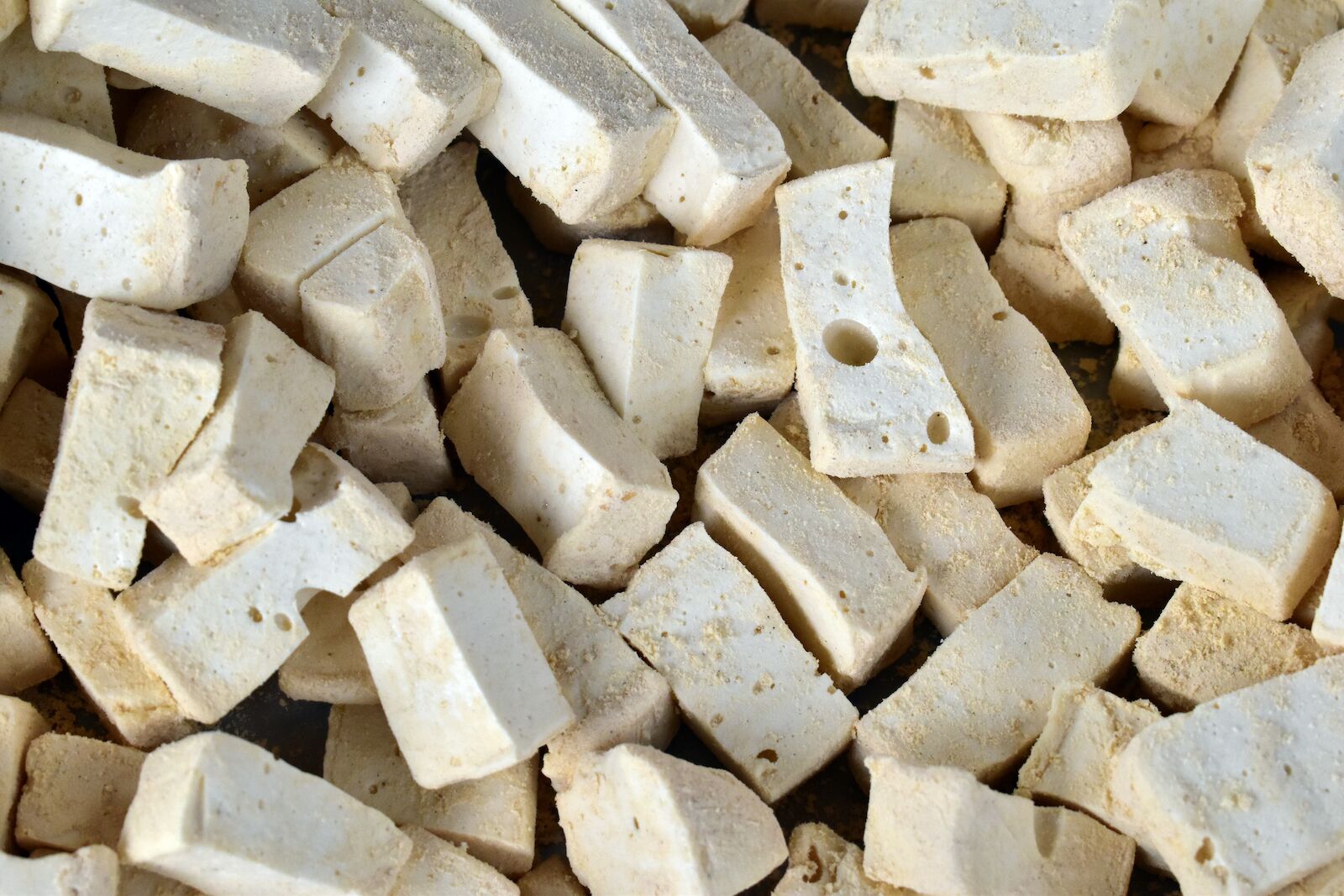 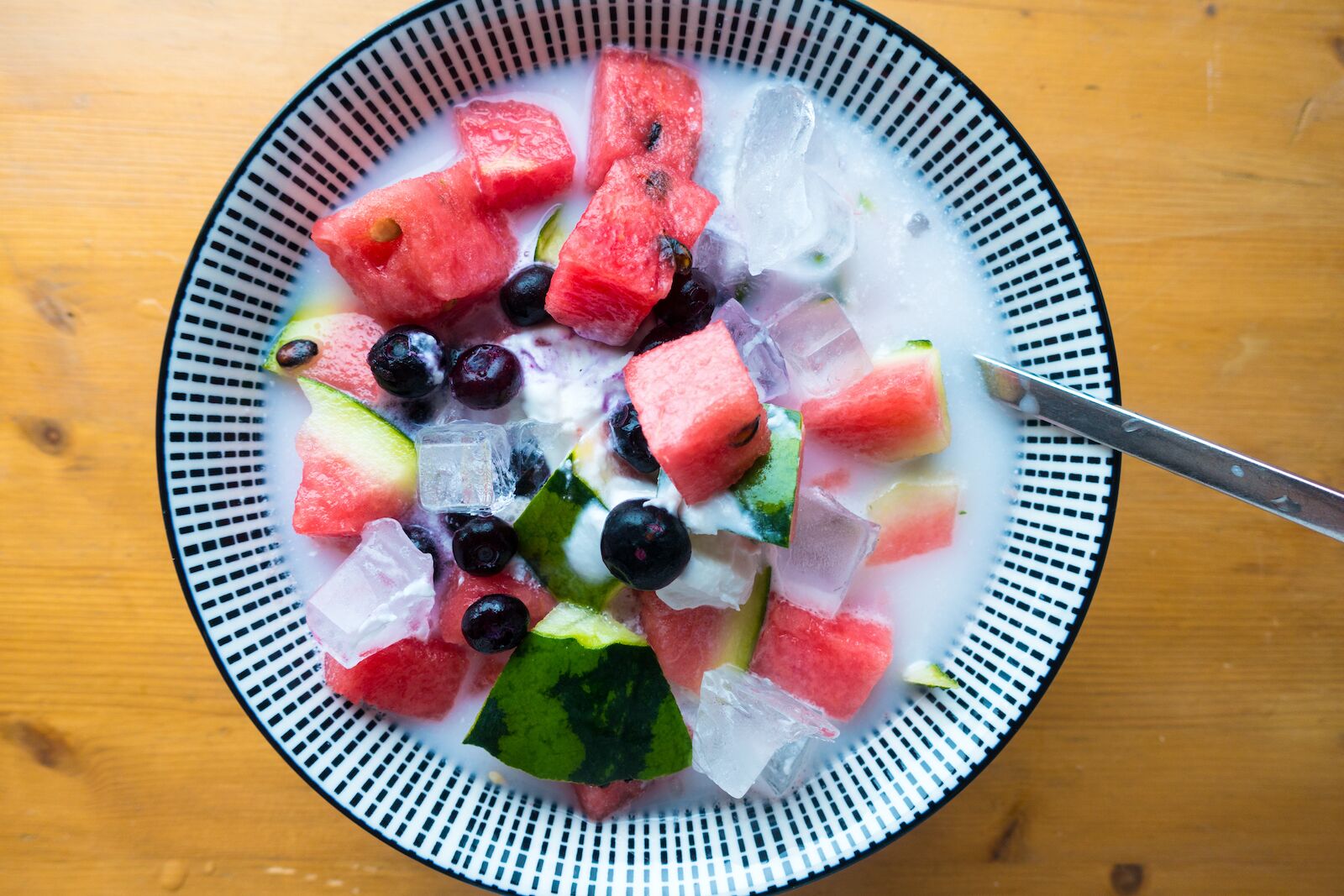 Hwachae is technically a drink. It’s a sweet punch flavored with summer fruit — in particular watermelon, cantaloupe, and honeydew melon. The pieces of fruit float in the punch in ball shapes. The liquid in the punch can be a combination of Sprite, milk, or Korean cider, and lots of ice. It’s also sprinkled with plenty of sugar to make the most refreshing sweet summer beverage. 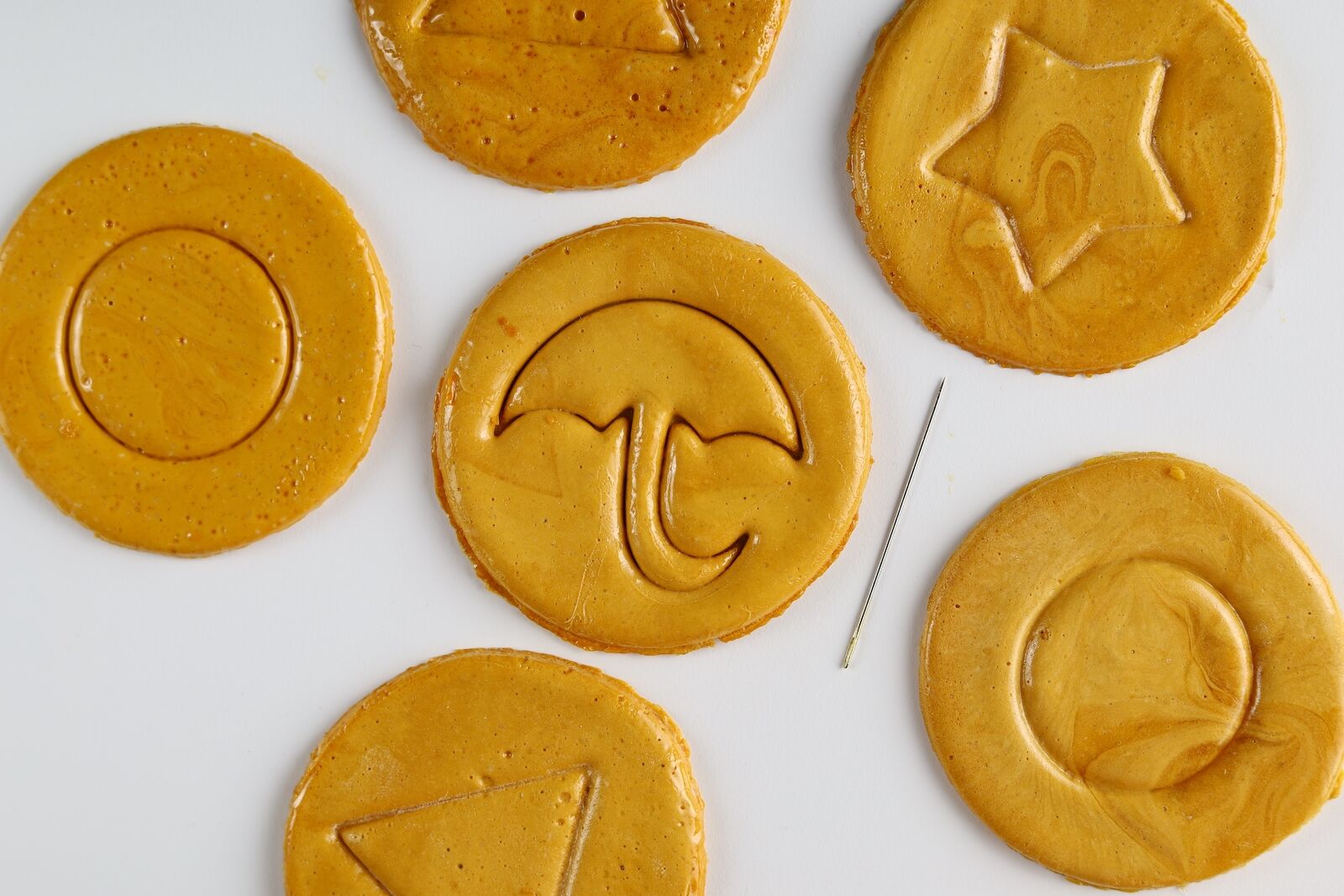 Most people outside of Korea were introduced to dalgona through the show Squid Game. Dalgona, or ppopgi as its known in Korea, is a street food candy, made from melted sugar and baking soda — similar to toffee. The caramel colored discs of candy are often stamped with shapes, like hearts or stars. Dalgona is the name of a type of whipped coffee drink, which also originated in Korea. 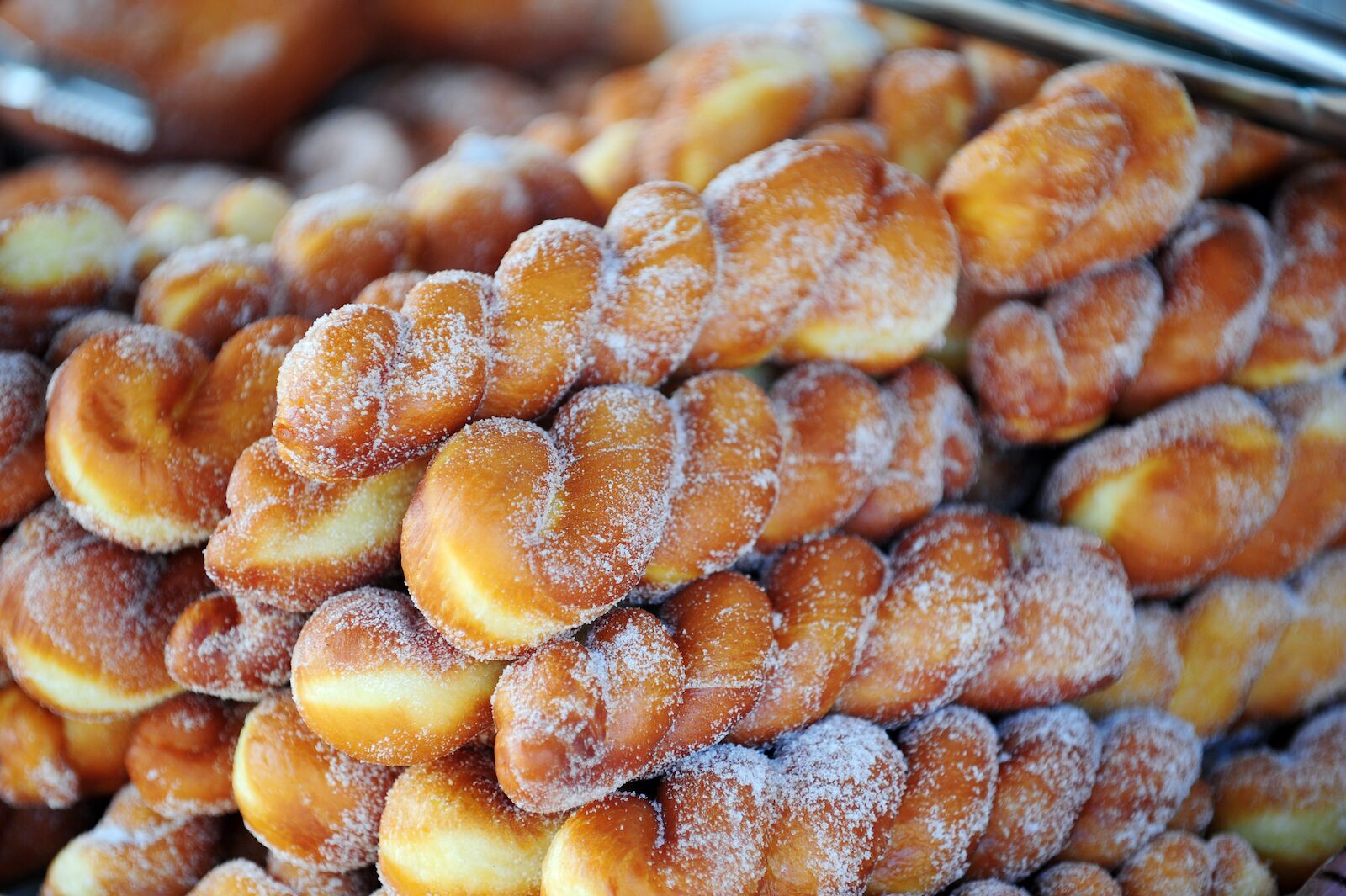 Sold in bakeries and as a street food, kkwabaegi are a type of doughnut. Rather than the round doughnuts you’ll find in the United States, these doughnuts are twisted into a spiral shape. The golden doughnuts are fluffy and soft, and sprinkled generously with cinnamon sugar. 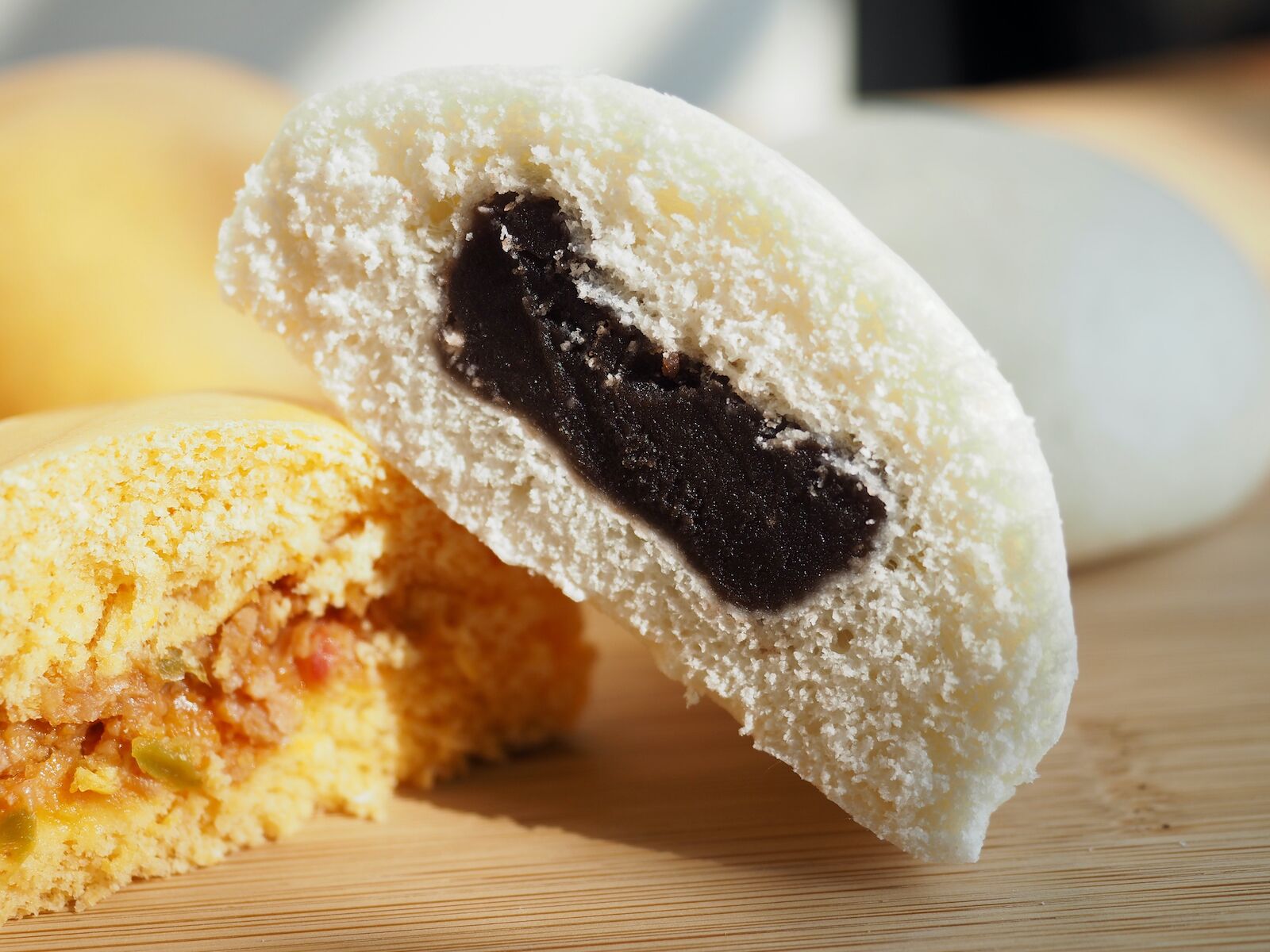 Hoppang are a common Korean snack. A type of jjinppang, or steamed bread, hoppang are similar to fast food. The typical filling is sweet red bean paste. However, there are savory versions filled with vegetables or curry.

Baesuk is a steamed whole pear. Baesuk is served as a dessert, but it’s also considered a cold remedy in Korea. the top is cut off and the pear is stuffed with pine nuts and topped with red dates. Another way to make baesuk is to poach a bear in honey and served in a water based broth flavored with ginger. 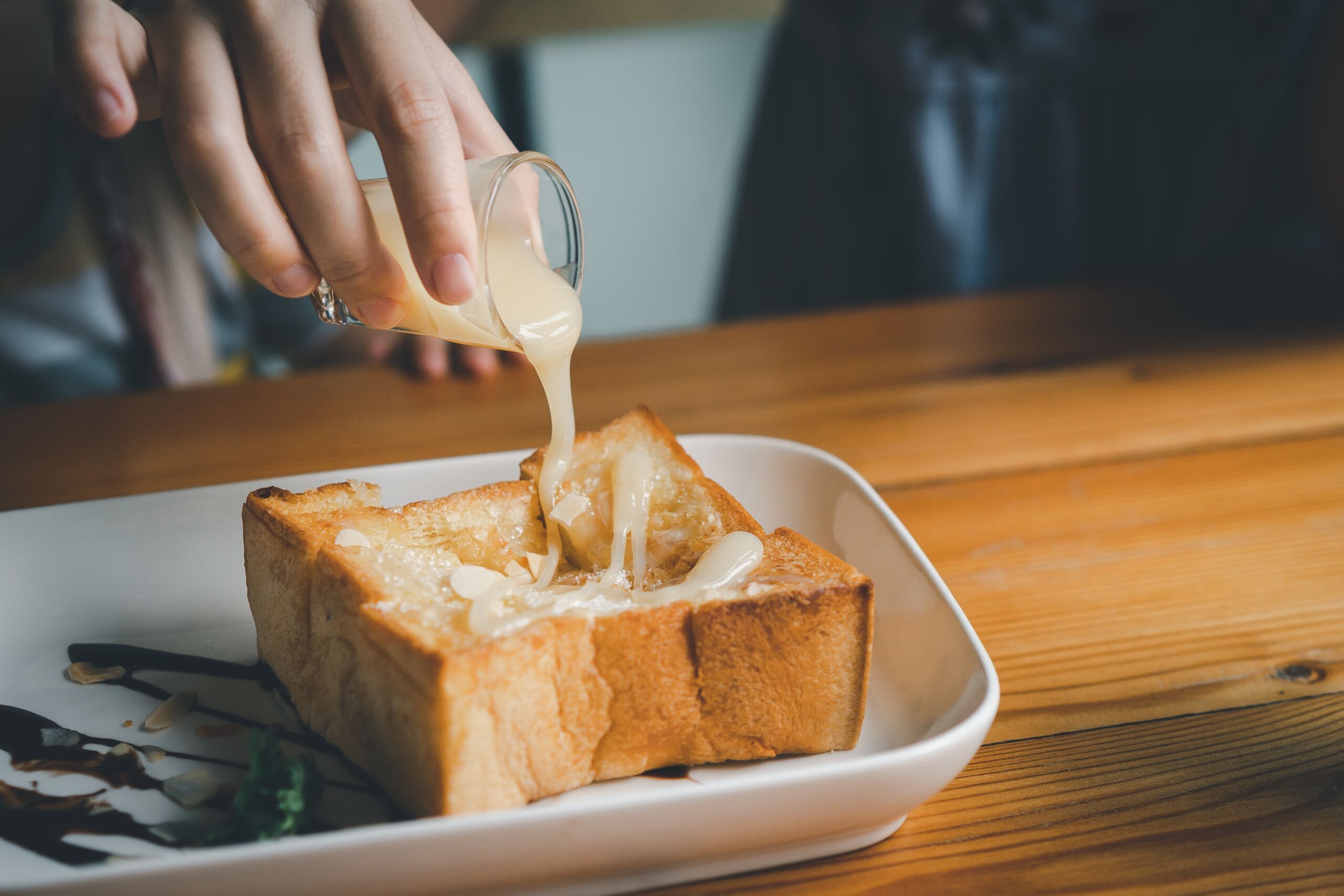 Honey bread is the Korean take on a dessert that became popular in Japan, called Brick Toast or Shibuya Toast. A thick slice of fluffy sandwich bread is topped with syrup, ice cream, and whipped cream. Cut up pieces of fruit, like strawberries, are typically added as well.

What is the most popular dessert in Korea?

What is Korean cake called?

Korean cake is called tteok. Tteok is an umbrella term for all cakes in Korea made with rice. Ingredients included in tteok include pumpkin, red bean, and pine nut. There are both sweet and savory versions of tteok. Tteok can be either steamed or pan-fried.

Is Mochi popular in Korea?

Mochi is popular in Korea. In Korea, mochi is called chapssaltteok. Chapssaltteok is often filled with red bean paste. Often, chapssaltteok will be given as a gift to students who studying for their university entrance exams.