When you try Hawaiian shave ice for the first time, it’s the light texture you notice first. Then, the intense flavor — a direct result of that delicate texture. Made with the sheerest flakes of frozen water, shave ice absorbs the fresh flavors with which it’s drizzled rather than having them seep through to the bottom. That singular combination of feathery ice and sweetness is unforgettable.

“Slushes are more watery and a little carbonated. Shave ice is often compared with snow cone on the mainland, but the texture is a huge difference,” Jerry Lee, the owner of Waiola Shave Ice on the island of Oahu, tells me via email. “Shave ice is finely shaved, almost powdery, and just melt in your mouth and never chunky like the snow cone.”

The original Waiola grocery in Honolulu was opened by a Japanese family in the 1940s, and the shave ice window was added in the 1970s before the store was sold to Jerry Lee’s family in 1980. Lee’s family has been serving shave ice from it, and a second Honolulu location that opened in 1999, ever since.

“Shave ice is special in Hawaii because it was intended to be a cold treat for the plantation workers back in the days,” explains Lee.

It’s that history that’s responsible for shave ice’s special texture. Japanese immigrants came to Hawaii beginning in the 1880s to work on sugar and pineapple plantations. On Sundays, their only day off, they shaved slivers off blocks of ice, adding fruit juice or sugar to the shave ice for flavor.

The plantation origins also explain why the treat is called “shave ice” and not “shaved ice,” since the language that emerged from so many cultures working and living together is now known as Hawaiian pidgin — also called Hawaiian creole or, in Hawaiian, ōlelo paʻi ʻai — and is spoken as a first or second language by a majority of Hawaiian residents.

The Japanese workers may have been inspired by a hot-weather treat called kakigori that originated in Japan. Kakigori is thought to date back hundreds of years to when the country’s elite would enjoy treats made from blocks of ice that had been saved throughout the winter. The first kakigori store opened in 1872. When Japanese people started to arrive in Hawaii in 1885, it’s probable that some had tasted kakigori in their home country.

The East Asian influence on shave ice has continued beyond the plantation days. Nowadays, some shave ice purveyors will include adzuki beans on the bottom, or slather the top with sweetened condensed milk, as is now popular with kakigori in Japan. Boba bubbles, invented in Taiwan, may work their way into a shave ice concoction as well.

Lee’s family is originally from Taiwan, which, he notes, was occupied by the Japanese. “We have exposure to different types of toppings including mung beans, tapioca, and taro,” he says.

“We have always been cooking our own azuki beans (red beans) and put a scoop on the bottom when we first started the business in 1980,” Lee says. “However, the sweetened condensed milk was introduced at around 1990. And we also made a combo bowl (azuki bowl) after we introduced the mochi balls (also homemade).”

The real blowout serving at Waiola is the “special azuki bowl,” which brings all of these elements together. It comes “filled with double servings of azuki beans on the top over the ice after we pour evaporated milk and then topped it off with condensed milk with mochi on the side,” says Lee.

Anyone new to shave ice, though, may want to start with the simple ice and flavored syrups for a refreshing confection with which you can really experience that melt-in-your-mouth quality. Lee says that when first-timers come to the store, he suggests a traditional trio of flavors.

“We often recommend the rainbow flavor (strawberry, blue vanilla, and banana) for the color contrast and the mixture of the three primary colors. It’s also the kids’ favorite,” Lee says. “However, strawberry is still our best seller aside from the locals-only lilikoi (passion fruit) and li hing mui (sweet sour plum).”

A good reason to opt for the local favorite flavors is not just because they’re unique but because options like papaya, passion fruit, or mango are often made with fruits grown right in Hawaii. Whichever flavors entice you, and whichever island you find yourself on, below are the best shave ice options you’ll find there. 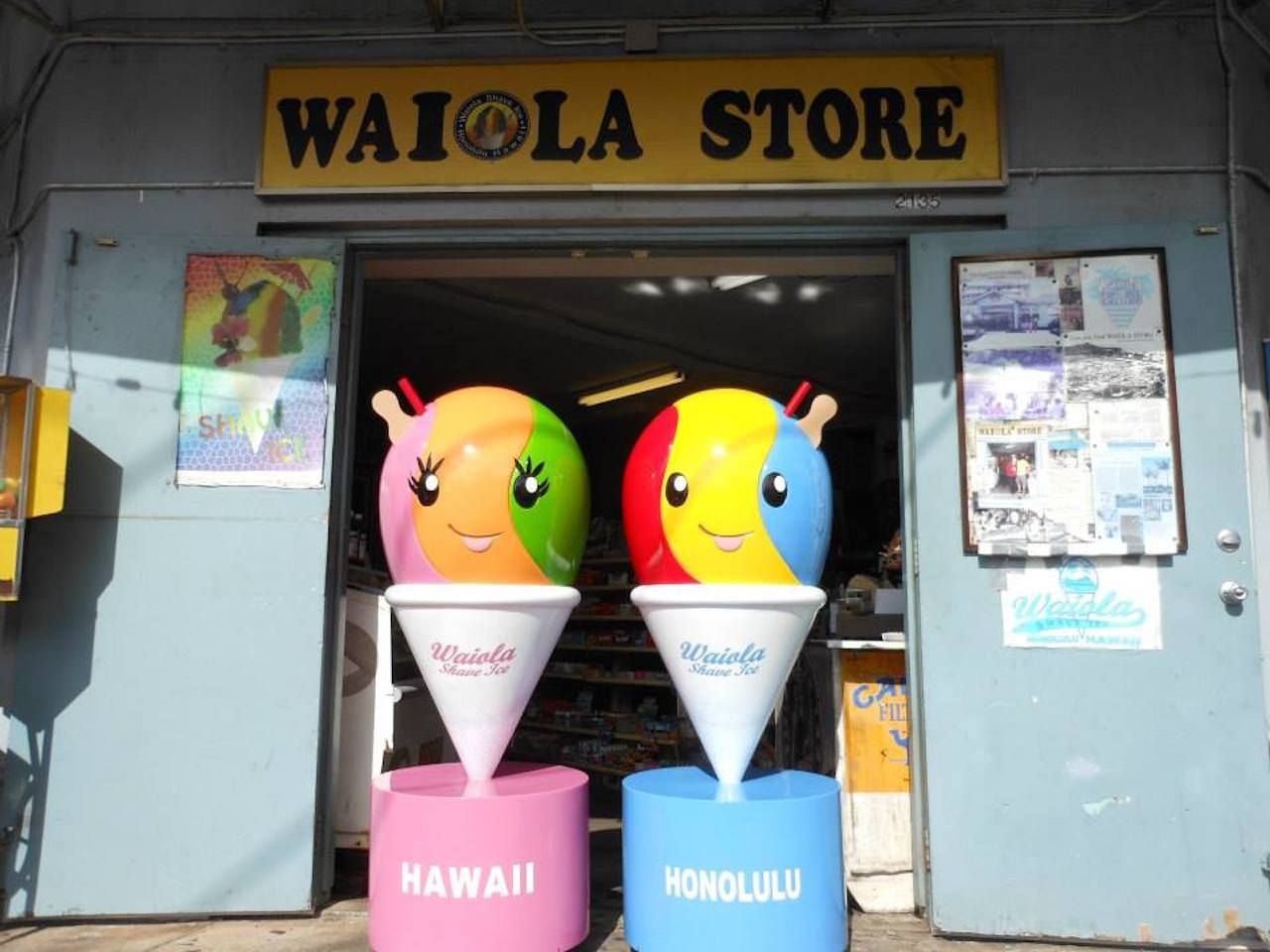 Waiola Shave Ice in Honolulu: From its store on Waiola Street, the Lee family has been serving shave ice for over 40 years. They make all their syrups in-house without pure cane sugar. They make their azuki beans every day and their mochi balls twice weekly. Beyond the classic rainbow flavor, another popular choice is the Obama Rainbow, with melon, lime, and cherry. The line here is long, but it moves quickly.

Matsumoto in Haleiwa: If you’re on Oahu’s north shore, home to the monster waves on which world champion surfers like Kelly Slater spent their adolescence honing their skills, make a stop at Matsumoto Shave Ice. What started as a grocery store opened by Stanley Matsumoto’s parents in 1951 is today the most popular shave ice spot on this side of Oahu. They’ve got over 40 flavors — from well known options like strawberry and green tea to more unusual ones like pickled mango and Ramune, a Japanese soft drink.

The Island of Hawaii 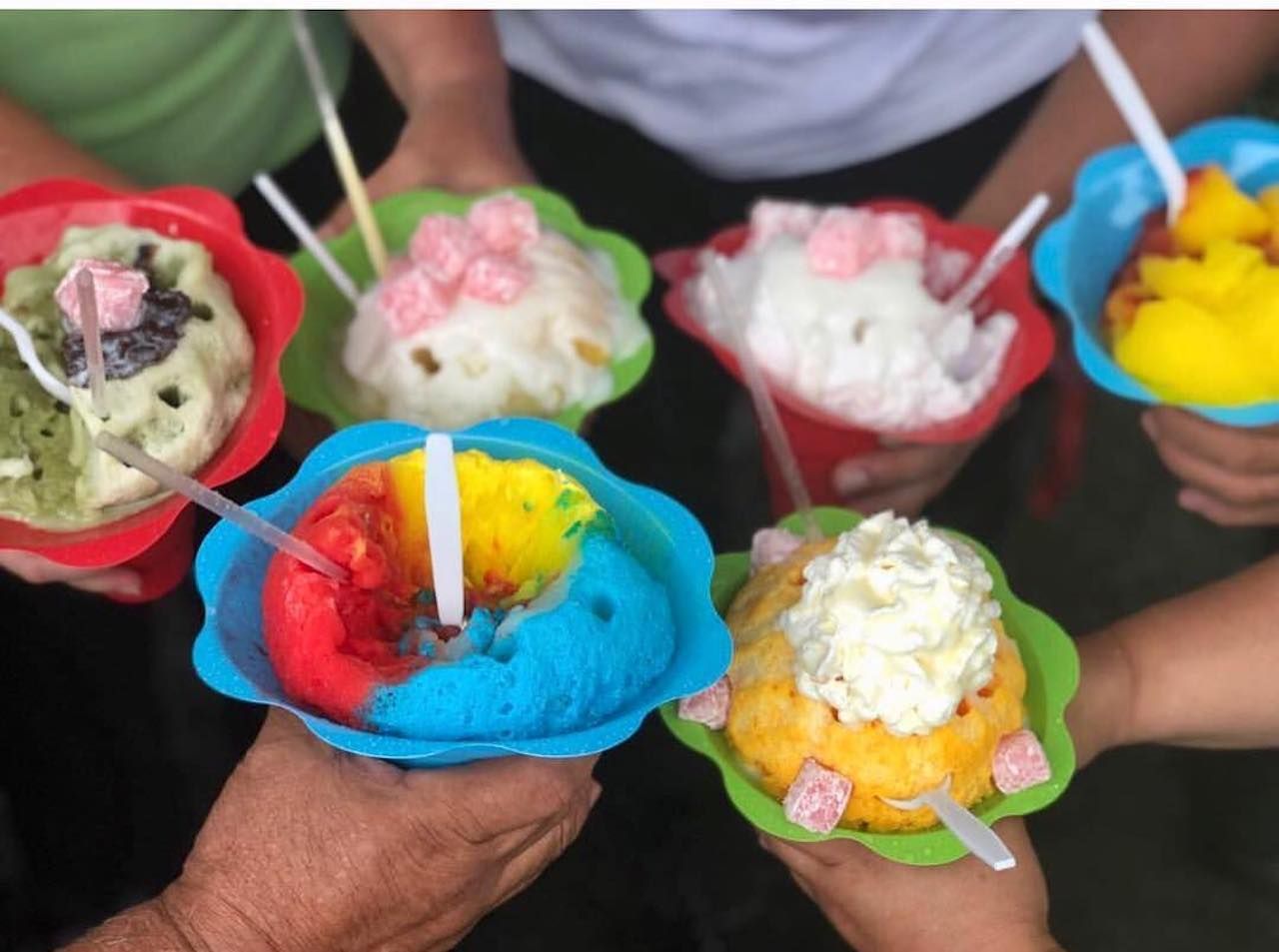 Original Big Island Shave Ice in Hilo: Hilo has the most unique and local vibes you’ll find in Hawaii, and it’s one of the coolest towns we think you should visit this year. When you go, you might be interested to know that “Hilo old timers tend to say ‘ice shave’ rather than ‘shave ice,’” Donna Kimura, the marketing director for the Island of Hawaiʻi Visitors Bureau, says — although why the name reversal came about no one seems to know with certainty.

Despite the tendency to call it ice shave, the best place on this side of the Hawaiian island to find the stuff is at Original Big Island Shave Ice. As Kimura explains, the purveyor’s roots go back to 1957, when Lorraine Kaono opened a small truck serving food and ice shave in Kawaihae. Now, her son Reggie is the owner, operating it with family and using his mom’s original homemade syrup recipes along with new creations of his own. “I’ve tried the chantilly, ube, and Almond Joy — all very yummy,” Kimura says. Ube is a vibrant, purple sweet potato that is a must on Hawaiian tables at Thanksgiving.

Scandinavian Shave Ice in Kailua-Kona: On the dry western side that draws sunseeking mainlanders, Scandi’s carries nearly 80 flavors, some of them sugar-free and some of them in very bright colors (you can choose both raspberry and bubblegum in a hot pink or cerulean blue). They’ve got tasty all-natural flavors, too, among the green tea, passion fruit, and pineapple. What puts Scandi’s on this best-of list, though, is their shave ice’s inimitable texture.

Kimura tells Matador that Scandi’s “is a favorite because their ice is shaved very fine (soft and light).” Think of something that disappears in your mouth but leaves the sweet flavor behind, like extra cold cotton candy. 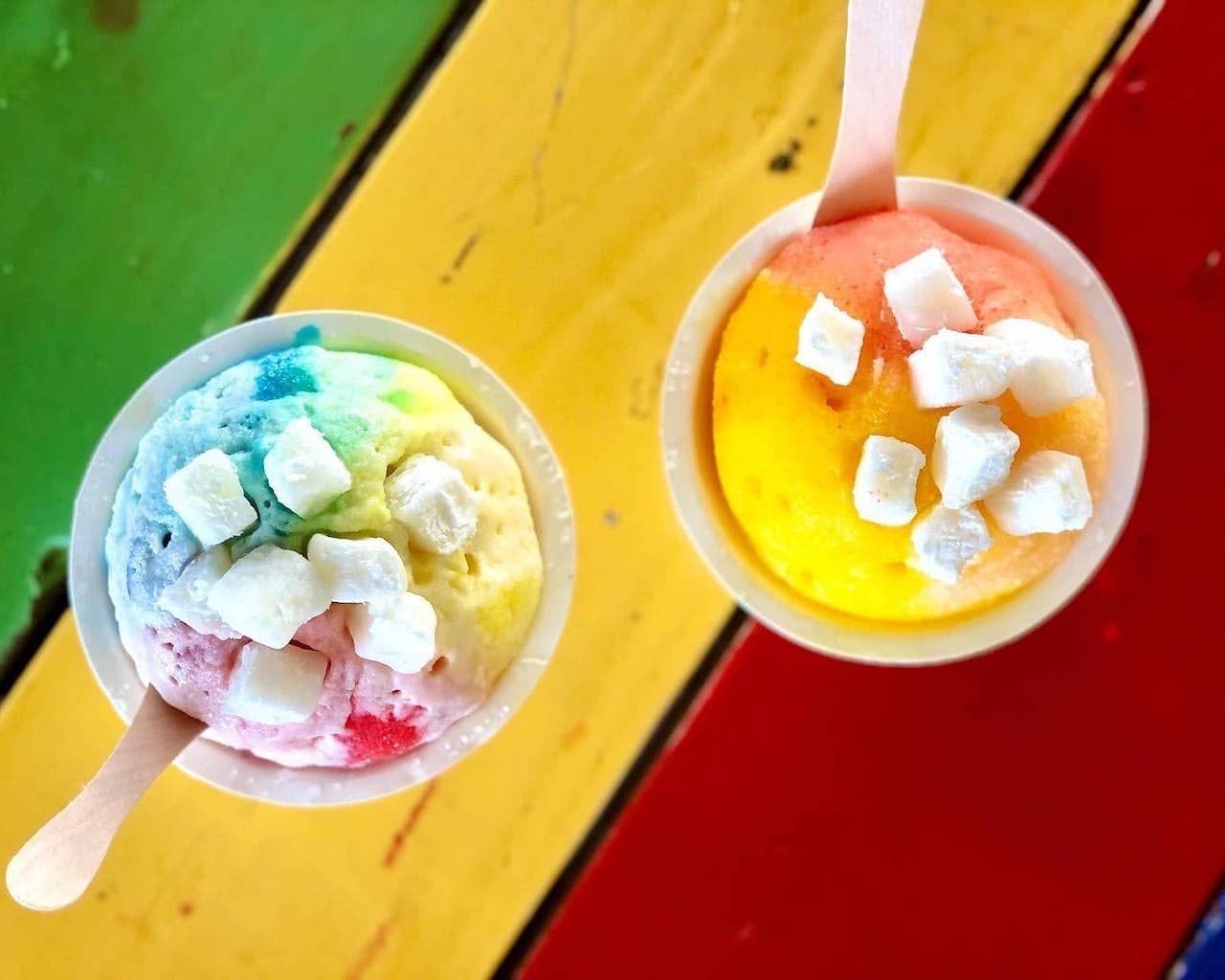 Ululani in Lahaina, Kihei, Wailuku, Kahului, Paia: Leanne Pletcher, the PR director at the Maui Visitors & Convention Bureau, points us toward Ululani’s Shave Ice. When Oahu natives Ululani and David Yashamiro opened their first store in Maui in late 2008, they brought with them years of experience making the refreshing treat on the mainland, serving them to happy customers in Oregon, Washington, and British Columbia. There, people readily appreciated the difference between shave ice and the chunky snow cones they were familiar with.

When they returned to the islands, they opened their first store in Lahaina. There and at its five other Maui locations, Ululani uses only top-quality ingredients like pure sugar and fresh fruit purees to produce its 50 flavors. Stand-outs include coconut, guava, and lilikoʻi. To any of these you can add a “snow cap” of sweetened condensed milk, toasted coconut, azuki beans, or fresh mochi balls.

Where: Multiple locations across the island 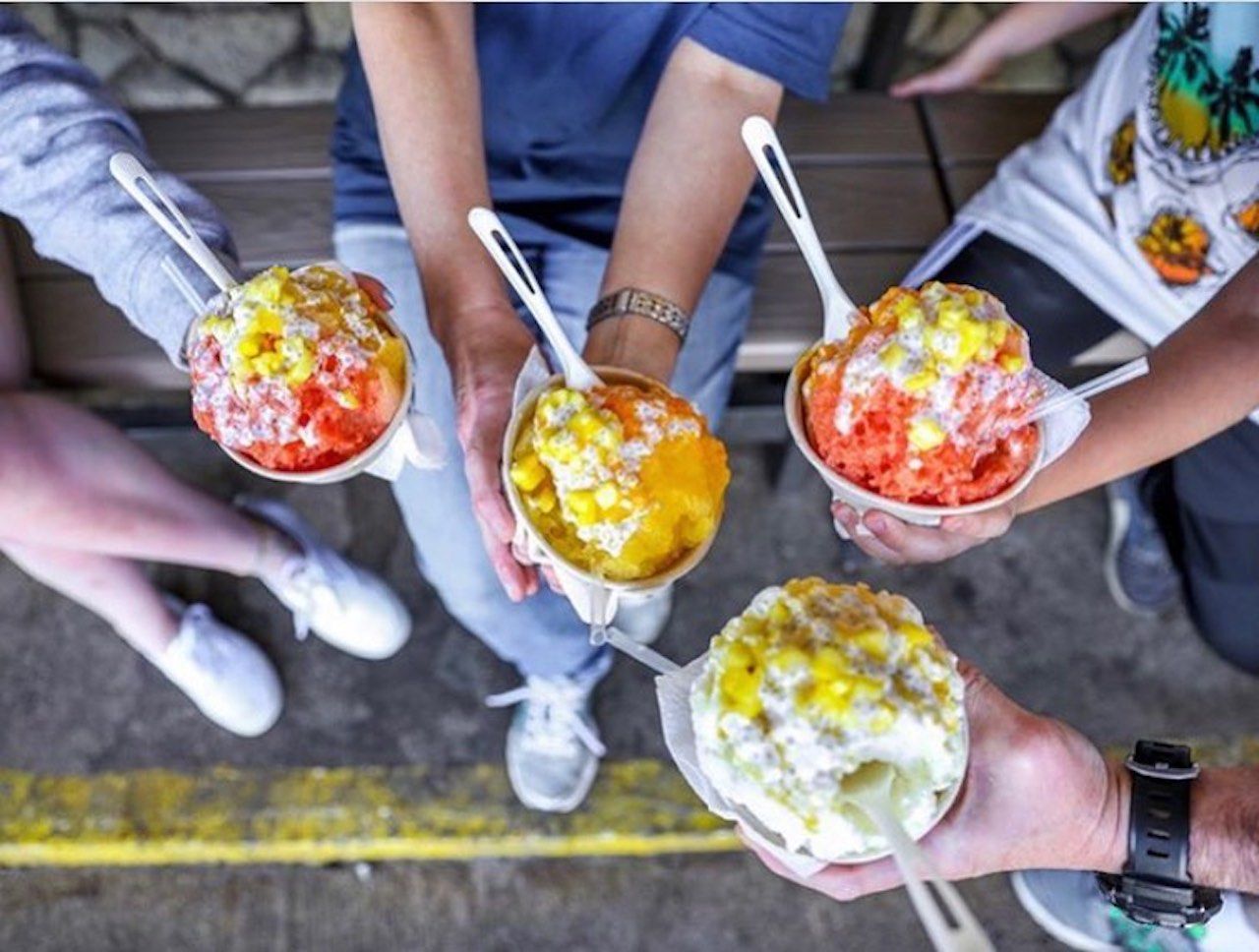 Waikomo Shave Ice in Koloa-Poipu: Waikomo wins the best shave ice stamp in Kauai for its 100-percent natural ingredients — from raspberry, guava, and mango to passion fruit and coconut-pineapple — that result in a flavor explosion in your mouth. People often comment how intense the flavor is, which makes up for the lack of awesome shave ice hues. Without artificial colors, it’s hard to create a day-glo cyan and magenta cone. Instead of condensed milk, Waikomo also slathers on coconut cream sauce and local honey. You can even have your “Coco Loco” served in a half coconut, with actual fleshy coconut meat inside. With no artificial anything, the prices here are higher than at other shave ice locations, but that hasn’t put a dent in its ever-present line of appreciative customers.