It’s easy to see why Korean BBQ holds such a special place in the hearts of many Americans. It’s a meal where friends can settle at the table for a night of riotous fun, pass around shot glasses of soju, and swill beer between rounds of greasy, smokey, grilled beef ribs and pork belly. It’s a communal meal best enjoyed with people you love, a place to go to celebrate and let loose. Korean barbecue encompasses some of the best South Korean dishes.

It’s also best experienced in a restaurant setting. From the tasty pickled dishes and the smoking charcoal grill to the tall bottles of Korean beer, eating at a Korean barbecue restaurant should be at the top of any culinary adventurer’s bucket list.

There’s just one thing you have to ask yourself before diving in headfirst: how do you order, cook, and eat Korean BBQ? It’s a culinary style steeped in ritual, and there are some unspoken rules that will help you expertly navigate the menu and the dinner table. 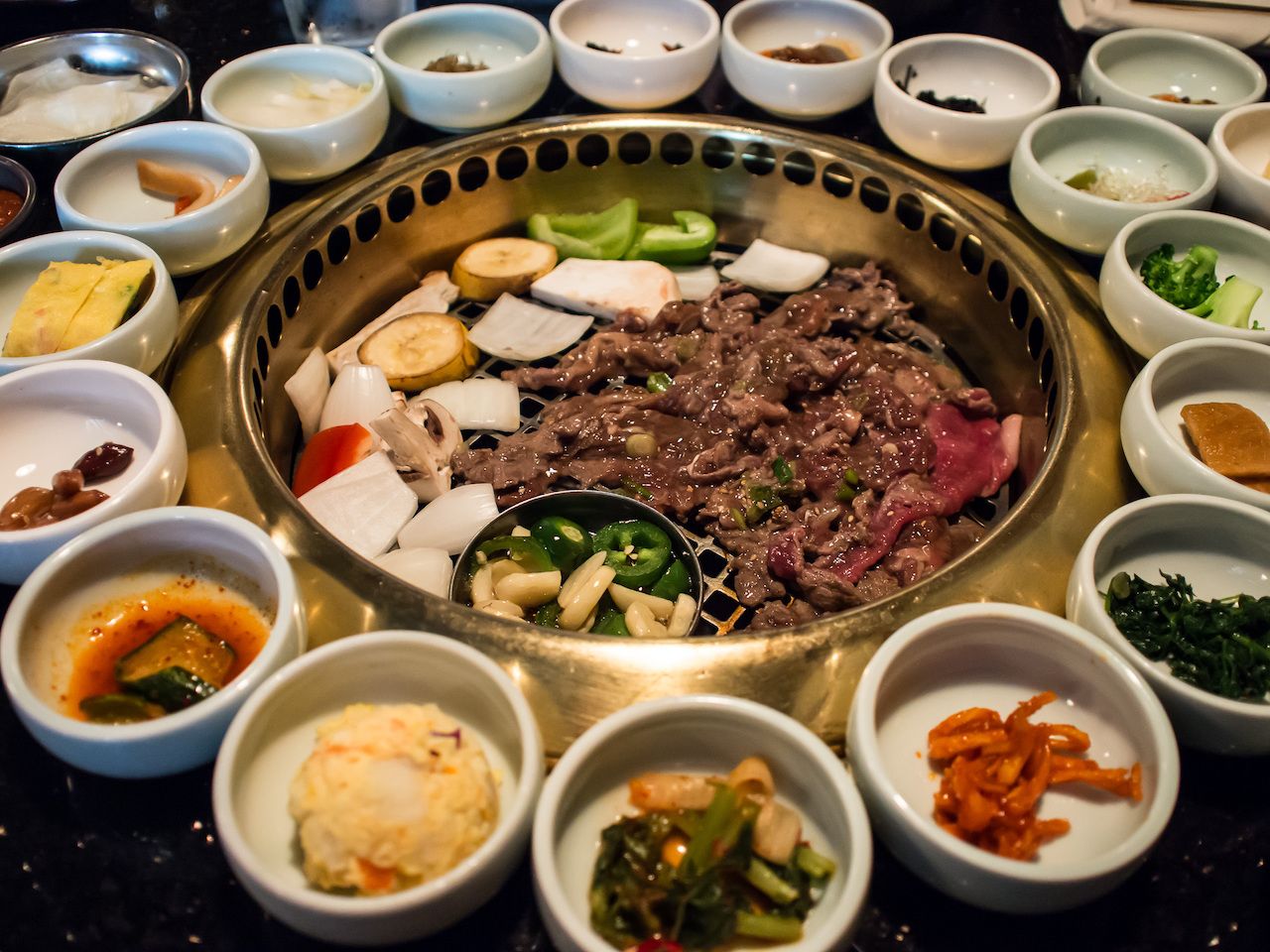 Grilled meats first emerged in Korean cuisine in the Goguryeo era (37 BC to 668 AC), according to Korea Journal. These dishes were known as maekjeok, and were served on a skewer (like a kabob). Eventually maekjeok evolved into seoryamyeok, marinated beef soaked in cold water. By the 19th century, strips of marinated meat favored mainly by Korea’s elite became known as neobiani. Marinated and grilled beef became more widespread in the 1920s, when beef production went commercial. The dish then dropped in popularity during the 35-year Japanese occupation of Korea, during which severe beef shortages made meat prohibitively expensive. Bulgogi eventually emerged in the 1960s, and by the 1990s it had become one of the most popular dishes in the country.

What is bulgogi, and what should you order at a Korean BBQ restaurant? 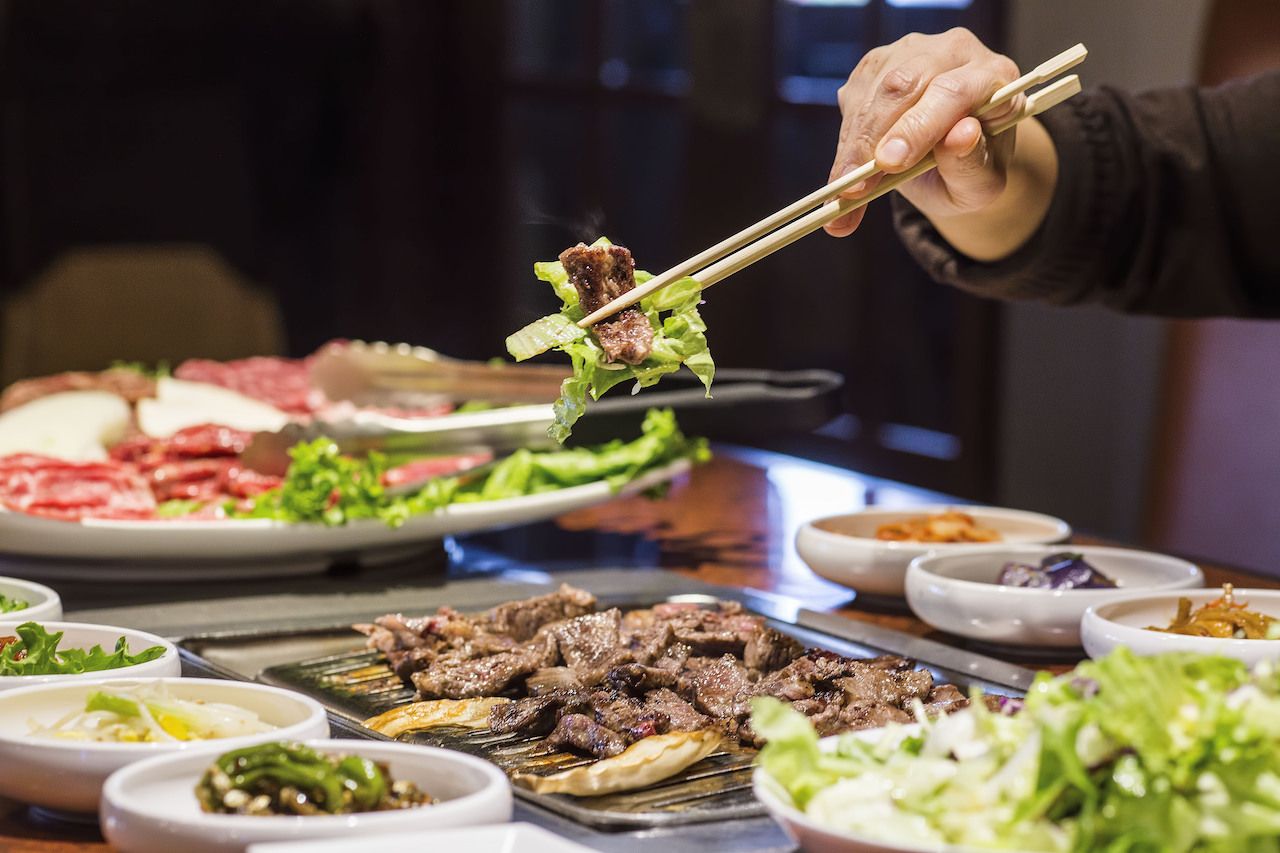 Korean barbecue meats are famously tender and juicy. The most well-known is bulgogi, which are thin strips of beef sirloin that are marinated and then grilled. Its irresistible texture and flavor is the result of a traditional marinade typically made with sesame oil, scallions, garlic, black pepper, and ginger. Slices of fruit, most commonly Asian pear, are crucial to this mixture, as the enzymes in the fruit help tenderize the meat. 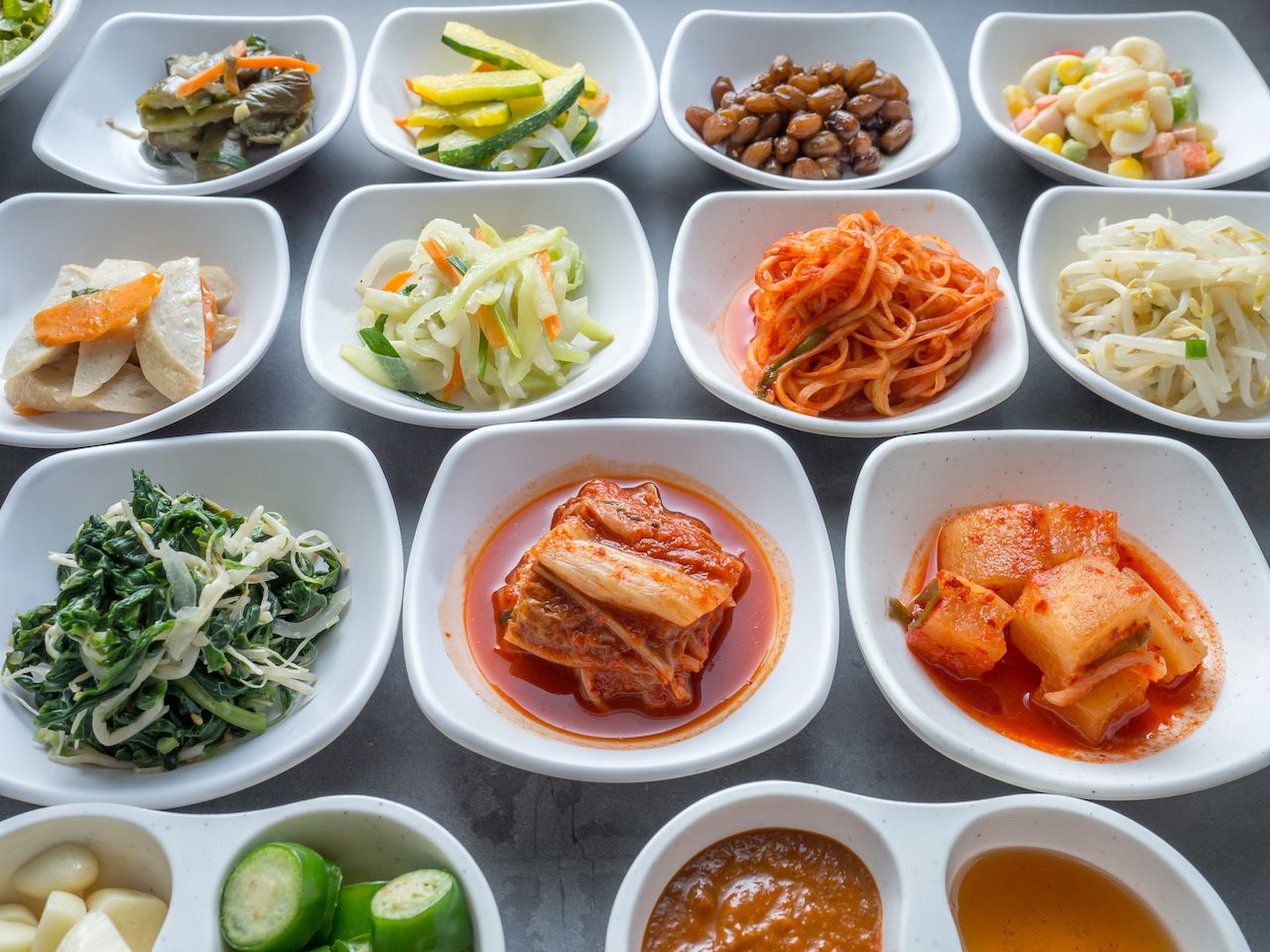 Along with the main meats, a Korean barbecue meal isn’t complete without a series of acidic side dishes called banchan. Though Korean barbecue spotlights meat, vegetables are an essential part of the meal. The most common varieties of banchan include pickled radish, mung bean sprouts, pickles, eggplant, and kimchi (pickled cabbage).

Of course, side dishes of rice to enjoy with your meat are also a must. Another popular accompaniment to the greasy barbecued meat is cold noodles, which can either be wrapped around the chunks of meat or enjoyed at the end of the meal to counter the spice and smoke from the grill.

Small ramekins filled with aromatic dips and sauces will also appear at your table. The most common among these are sesame oil, ssamjang (a combination of soybean and chili paste that pairs well with galbi and bulgogi), and gochujang, a spicy, sweet, and sour sauce also known as hot pepper paste.

How to order Korean BBQ

Menus at Korean barbecue restaurants tend to be expansive, listing the popular dishes like bulgogi alongside more adventurous options like beef tongue, squid, small intestine, and pork jowl. Diners who are eager to experiment might be tempted to sample one of everything on the menu — just don’t get overzealous. The restaurant’s menu won’t always specify the amount of meat in each serving, so it’s probably smart to start small. Order one serving of meat per person. If you need more, you can always order it. The short ribs and pork belly should be at the top of your list.

How to cook and eat Korean BBQ 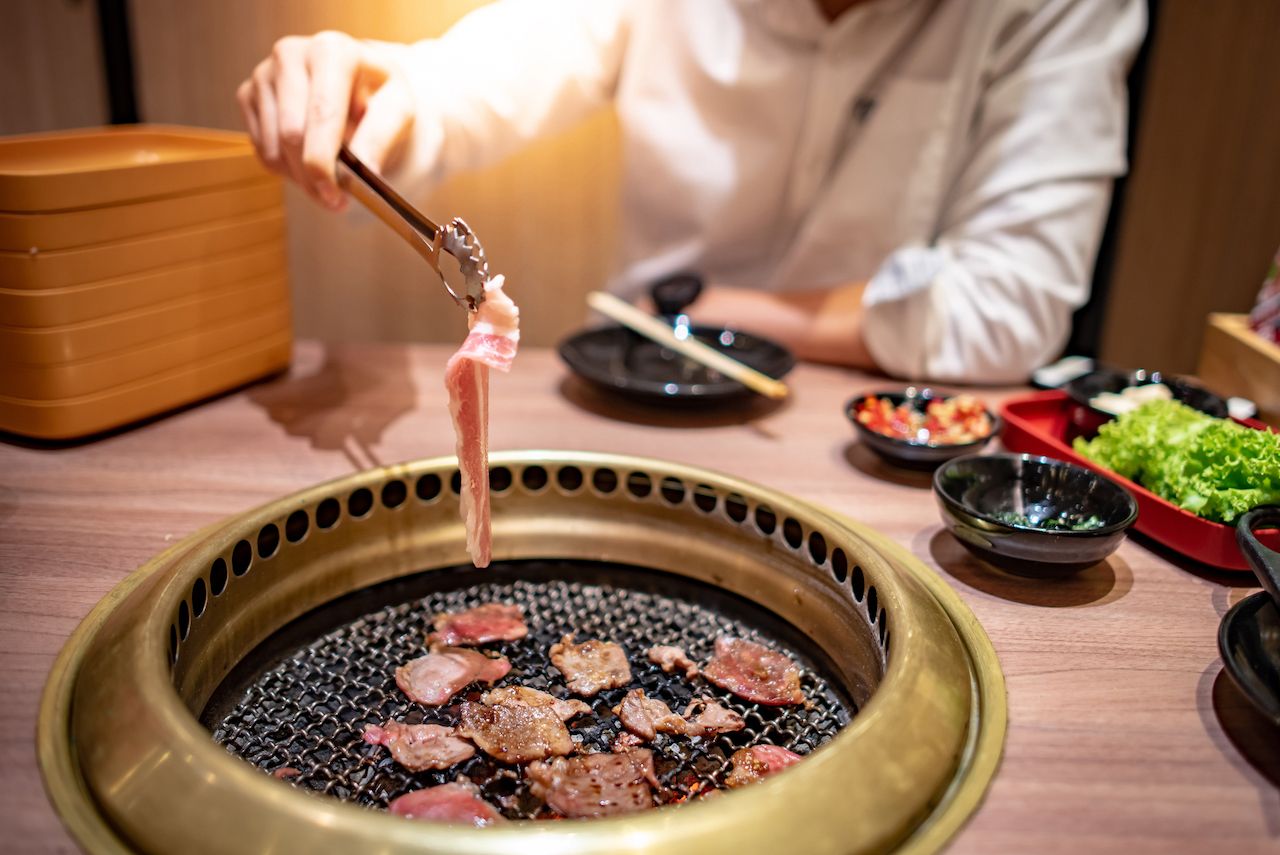 You typically cook the meat at a small grill attached to the table. Traditionally, Korean barbecue is cooked over charcoal, but some restaurants use a simple burner. At most Korean barbecue restaurants, you’ll be given tongs to flip your meat and remove it from the grill once it’s been cooked to your satisfaction. However, if you’re not comfortable flipping your own meat, your server will happily step in. Your server will also use a pair of scissors to cut the strips of meat into smaller, shareable pieces. The grill itself will likely be changed when you switch from beef to pork, or at least cleaned throughout your meal.

The galbi are cooked in long strips on the grill, then cut into pieces with scissors. Galbi is best enjoyed in a lettuce wrap (ssam), topped with ssamjang. Bulgogi, probably the best known Korean barbecue dish, takes just two quick minutes to cook on the grill, and can be seasoned with scallions or sesame seeds. Like galbi, bulgogi can also be served in a lettuce wrap. Eating ssam in one bite is considered good luck.

What to drink with Korean BBQ 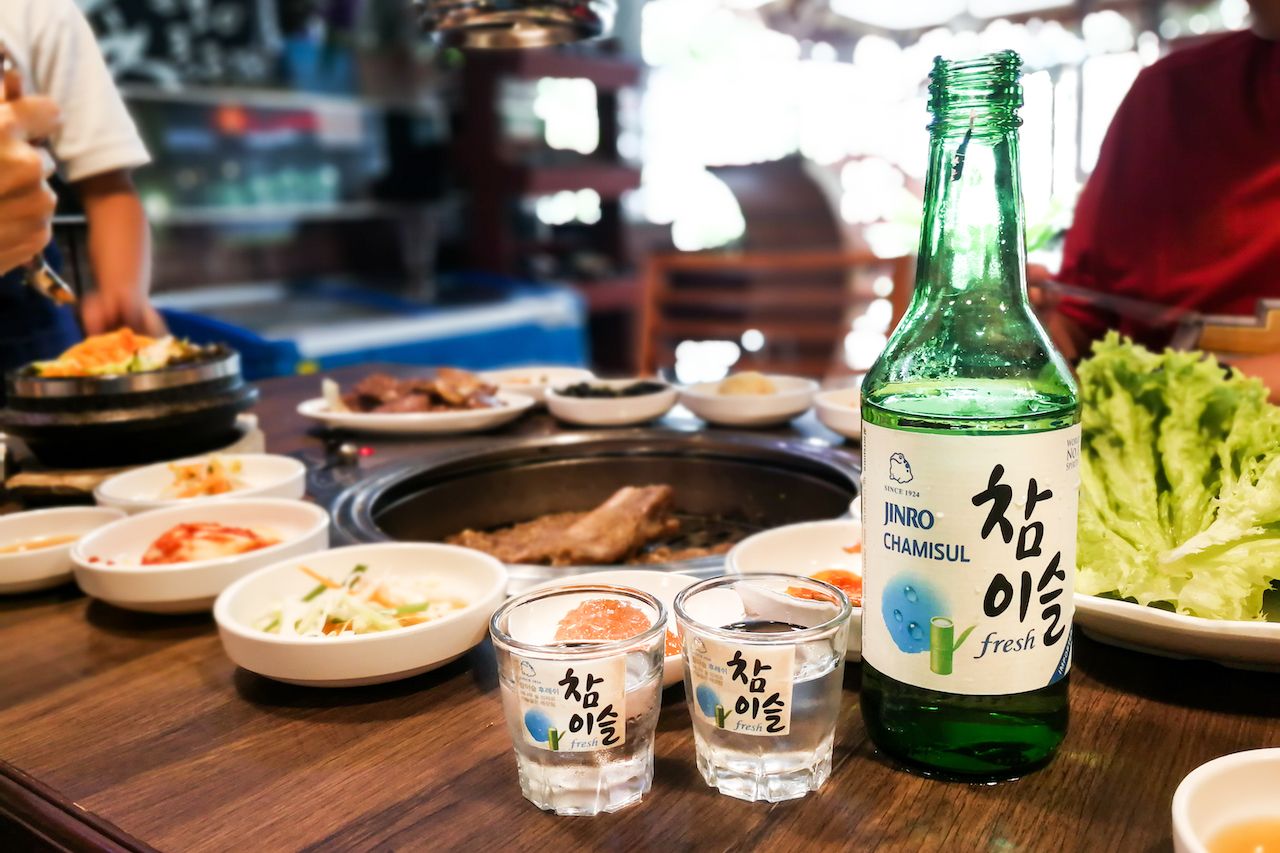 Since dinner at a Korean barbecue restaurant is usually a group affair, the evening will likely have a celebratory, raucous atmosphere. Expect the drinks to flow liberally. The biting, clean tang of soju, a (usually) rice-based clear liquor with a low-alcohol content, is probably the best accompaniment to the hearty, filling, and greasy grilled meat on your plate. You’ll also find sake and beer on the menu. One traditional custom you might adhere to, especially if you’re dining out with a large group of friends, is to refrain from filling up your own glass. Instead, wait for your friends to fill it up for you, and show them the same courtesy in return. Just keep in mind that it’s easy for the drinks to add up this way.