If you’ve only ever tried sake at cheap sushi restaurants, you’d be forgiven for thinking that all Japanese sake is meant to be served hot and taken as a shot. But if you want to be taken seriously on your next trip to Japan, or even your local Japanese restaurant, you need to understand that sake is just as complex as any whiskey or wine. And more importantly, that the etiquette of drinking it in no way involves yelling “sake bomb!” and banging on the table until a shot of sake falls off of chopsticks and into a glass of beer.

If you want to drink sake (pronounced sah-kay, not sah-kee) as they do in Japan, you have to know the traditions that surround every aspect of this fermented rice beverage.

What is Japanese sake?

“Sake is said to have been a gift from the gods (Shintoism) being a very religious drink, which makes serving traditions very important,” says Jessica Joly, a sake sommelier and Miss Sake USA winner who works with New York City’s Tokyo Record Bar. “Still today it’s used for many serious ceremonies such as weddings, company openings, and funerals.”

There’s truly a sake for every occasion. There’s warm (okan), which is generally cheaper and sweeter; room temperature (joon), which is higher quality and sipped; and chilled (reishu), which is perfect for a hot day. Some occasions call for the fancier stuff while other times are served well enough with an affordable bottle. Nearly all sake hovers around 15 percent alcohol by volume, or 30 proof.

“The broad nature of consumption is the main difference between how people drink sake in Japan,” Marc Smookler, the founder of the sake retail and education company Sake Social, says. “In the US, you are generally seeing people reserve sake consumption for sushi night, but in Japan; it’s not so precious. Drinkers are more knowledgeable about the many different styles of sake and therefore treat it more like a glass of wine in its ability to pair and be enjoyed with a wide variety of cuisines.”

How to serve sake 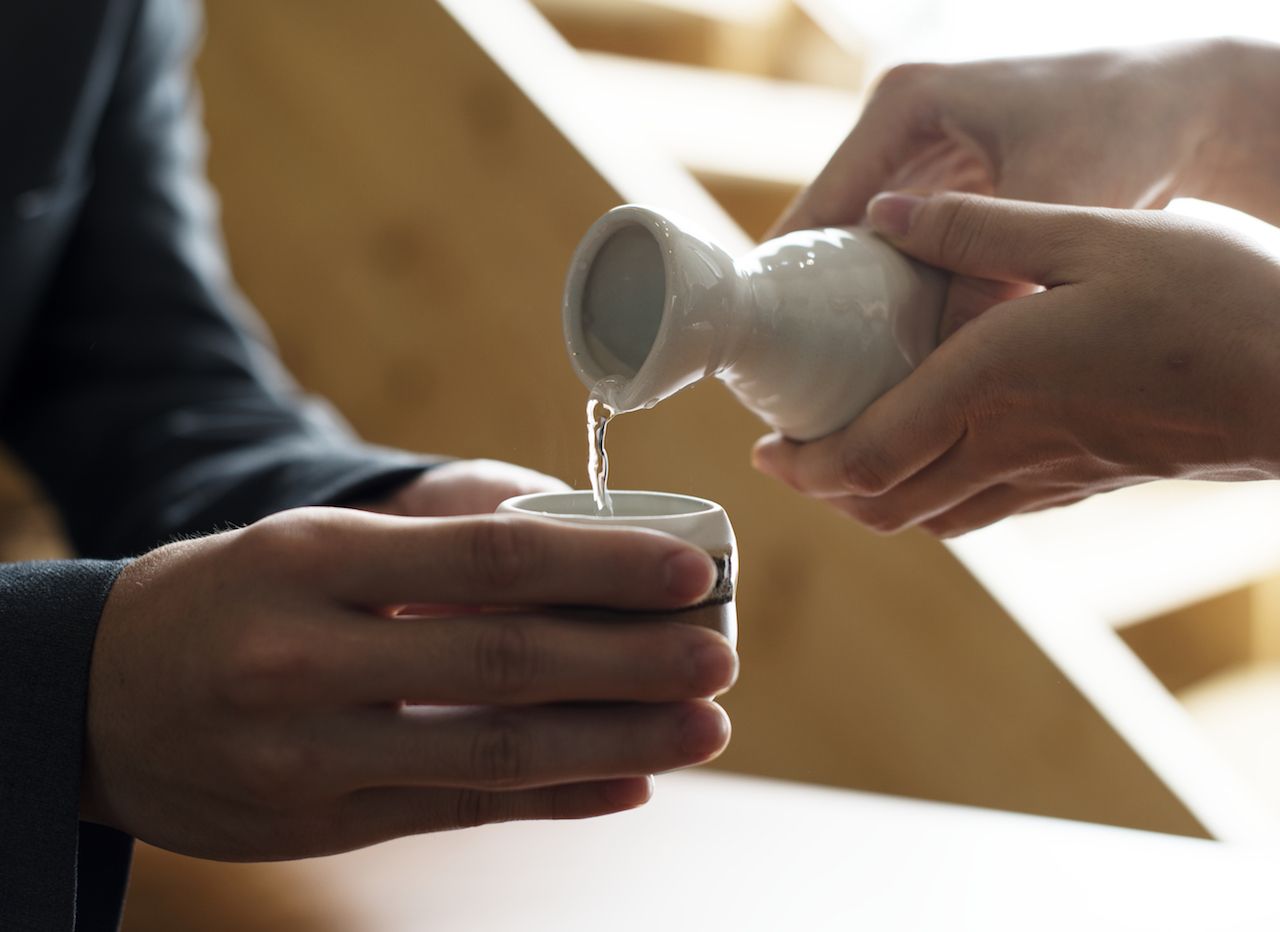 “Traditions play an important role in many aspects of Japanese culture, including sake, which has a history dating back to the eighth century,” Smookler says. “While there are many traditions involving sake surrounding celebrations (marriage, elections, changing seasons), the most elemental serving tradition is definitely that you should never serve yourself sake. Instead, your sake should be poured by a drinking companion, and you should return the favor throughout the meal.”

You’ll be given a ceramic sake cup called ochoko or choko when shaped like a small regular cup, or sakazuki when shaped like a flat saucer. Lift your cup and hold it with two hands, one around the sides and one supporting the bottom, while the host or person next to you pours the sake from a carafe (tokkuri). When it comes time for you to pour, make sure to pour with two hands as well.

Another type of glass you might come across is a masu, which is a small box that the ochoko goes inside. To show generosity, Smookler says, pour sake in the ochoko until it overflows and fills the box.

When you’re out with friends, two-handed customs can quickly fall off. It’s common, however, to keep the two-handed pour and receiving method when drinking with someone who is a higher class or status than you, like a boss, for example. Just make sure you start out on the formal side before switching to anything more casual. When in doubt, follow the lead of your host, so you don’t offend anyone or bring bad luck.

“If you are a female and you pour your own glass, they say you will never get married, and if you are a male they say that you will never advance in the work field,” Joly says. “This also makes it that much more of a communal drink to share and pour for others which creates interaction, called o-shaku.”

The communal drinking traditions have spawned words that relate solely to the drinking experience.

“It’s funny, because in Japan there is a word called nominication, which is a word they created,” Joly says. “Nomi means ‘to drink,’ and nication is the term taken from ‘communication.’”

How to drink sake 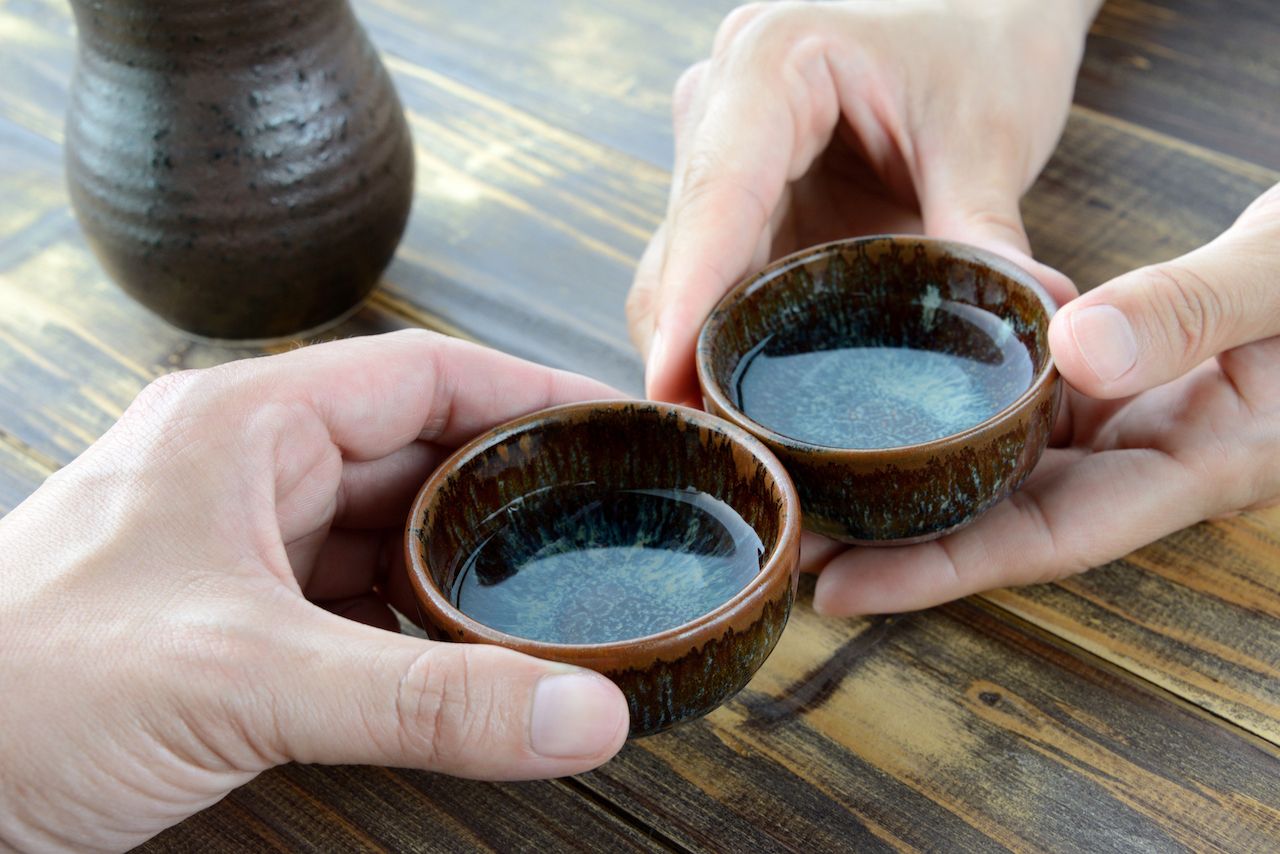 “Generally speaking, in the US, once people see a little sake glass they seem to want to shoot it,” Joly says. “I don’t know if it’s because it looks like a shot glass, but many times instead of sipping sake they shoot sake, and of course there are still places that are offering sake bombs, which you would never see in Japan.”

Drinking only happens once everyone has a full glass. A short cheers (kanpai) is said, then glasses are either clinked or raised. Make sure the highest seniority person at the table has the highest raised glass if you’re in a more formal or business environment. When you’re done drinking, leave some sake in your cup, otherwise people will continue to top you off.

While there are a lot of different types, you’ll generally come across four different styles:

Basic sake from lightly milled rice grains. Often the most affordable option and is sold warm, chilled, and sometimes at room temperature.

Sake that has a small amount of distilled alcohol added, which bumps up the percent a bit.

Made with rice that’s highly milled. Served at room temperature or slightly chilled.

The highest quality, and therefore most expensive, type of sake that uses the highest level of milled rice grains. Served at room temperature or slightly chilled.

While some sake can be enjoyed warm, the majority of “hot sake” you find at sushi restaurants is probably their worst, cheapest sake warmed over to mask the flavor and should be avoided at all costs.

How to pair sake with food 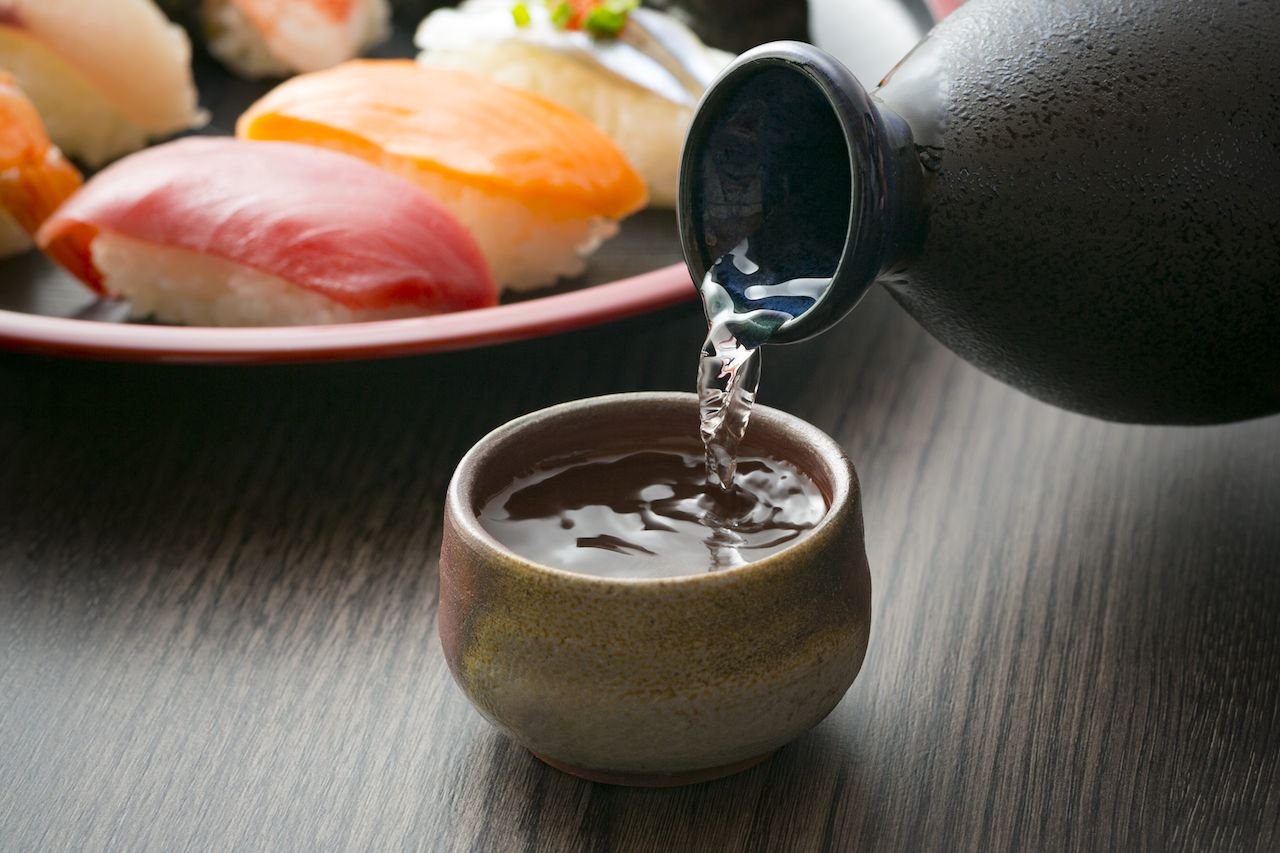 =
“In Japan, food is an integral part of the drinking experience, and people are supremely attuned to flavors and how things pair, so choosing the right drink to accompany their meal is given a good deal of thought,” Smookler says. “Even the local pubs where they gather to drink after work (called izakayas) prepare food that is specifically meant to pair with alcohol (a far cry from the wings and nachos we call bar food).”

Lighter and floral sakes are served with lighter dishes like sashimi, while fried and heavier dishes call for something a little heftier.

“In Japan, sake is paired with food to help elevate its natural flavors,” Chris Johnson, a board member of The Joy of Sake, says. “It’s one of the few beverages that naturally contain umami — the fifth taste that is partly developed by the presence of glutamates (glutamic acid). Some examples are served warm along with a duck hot pot, room temperature with grilled vegetable, or chilled with light preparations of fish, chicken, pork, or beef.”

Luckily, there are enough sake styles to match whatever your needs.

“Sake is a traditional drink that is consumed throughout the whole meal,” Joly says. “Typically, junmai styles or futsushu (table sake) is enjoyed more on a regular basis in the household, but you see more of the premium styles of ginjo sake being served at many restaurants and izakayas. Recently, sake has seen a boom in blending and mixing with whisky, tea, and spices at Japanese bars with bite-sized snacks. Sake is enjoyed many different ways, and there are no limitations with food. Trust me, sake pairs really well with pizza!”

Just like any other type of fermented beverage, sake can spoil over time. You’ll know its gone bad if it takes on a yellow tint or smells pungent or tangy, or there might be particles floating at the bottom of the bottle. To prolong the shelf life of a bottle of sake, you should store it in a cool, dark place, away from the sun (just like you would a bottle of wine). Any sake that was purchased in the refrigerated section of the store should remain chilled, and once you have opened a bottle of sake, it should be refrigerated until you finish it — preferably within a couple weeks. Most sake is best consumed within a year of purchase.